In Venezuela, where my wife is from, you are wise to wear your wealth with caution. With inflation at an all-time high and crime rates soaring, you're either a complete fool to wander out in public with any kind of jewelry on display, or you're simply looking for trouble -- you'll be robbed in no time, likely at gunpoint. So if you cherish your valuables and your life, you're better off to dress down in public and display that stuff behind closed doors, preferably at home.

I couldn't help thinking about that when I picked up a pair of Crystal Cable Arabesque Minissimo speakers from the company's Canadian distributor, Plurison, right after the Salon Son & Image 2015 show finished, and drove them home to review. Their boxes looked as plain as can be, perhaps to ward off thieves who would be completely unaware that the speakers inside cost $12,995 USD per pair. Yes, almost $13,000 -- in the United States, to boot. They're more than that in Canada, where I live, because our dollar is plummeting in relation to our friends south of the border. That's a huge sum of money for speakers, let alone for a fairly small two-way like this one. 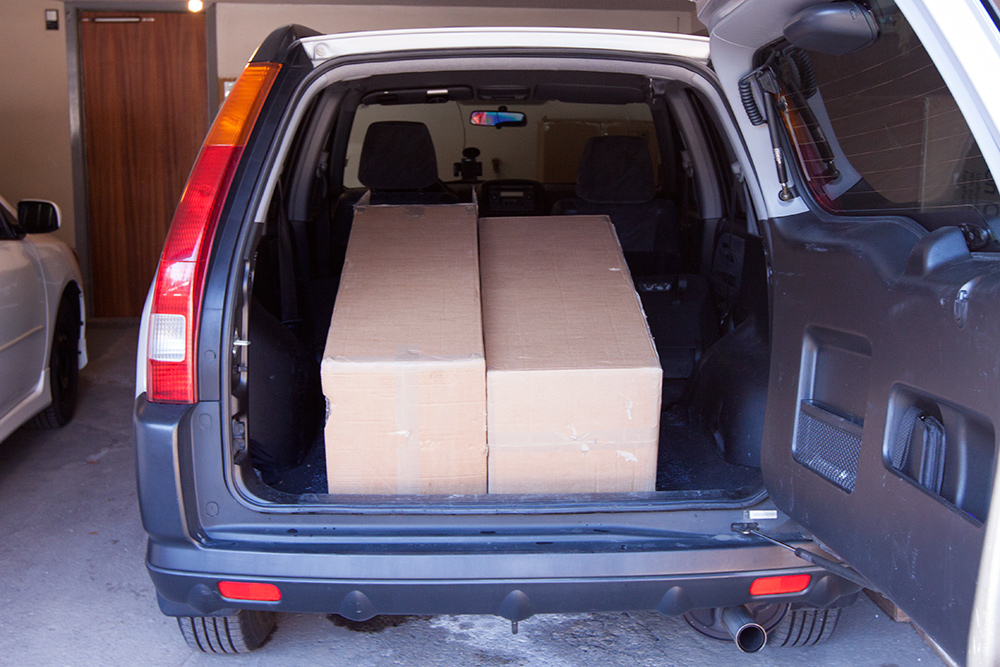 Yet you'd never know their value, or even what they look like, from outside the box. In fact, I left the speakers in their boxes in the back of my Honda CR-V for a couple of days after I got home and thought nothing of it, even when I left the vehicle in full view in a mall parking lot while I went to the gym. I figured no one would guess that the contents of the boxes cost $13,000 -- and they didn't. Anyone who saw the boxes probably thought they were from Home Depot and passed right by. Even my youngest son, who gets really excited to see anything new come through the door, was only mildly intrigued with the two boxes, which were barely taller than he is. 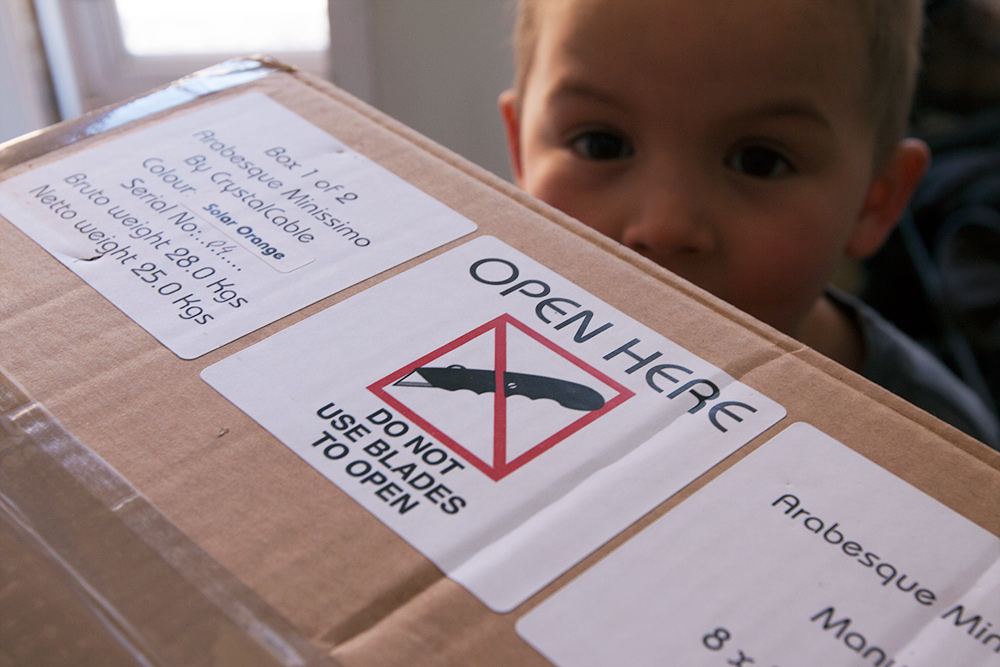 That all changed, however, when I opened the boxes and unveiled the gorgeously styled, lavish-looking Minissimos. My wife started fantasizing about what kind of room and décor would suit them, and my youngest son said, "Wow, Dad, I like your orange speakers. I really like them." I replied with, "Actually, they’re Solar Orange, if you want to be precise." (That's what Crystal Cable calls this finish. Aquamarine Blue and Pearl White are the other options.) Then my son danced around and tried to touch each part, which I quickly stopped him from doing. 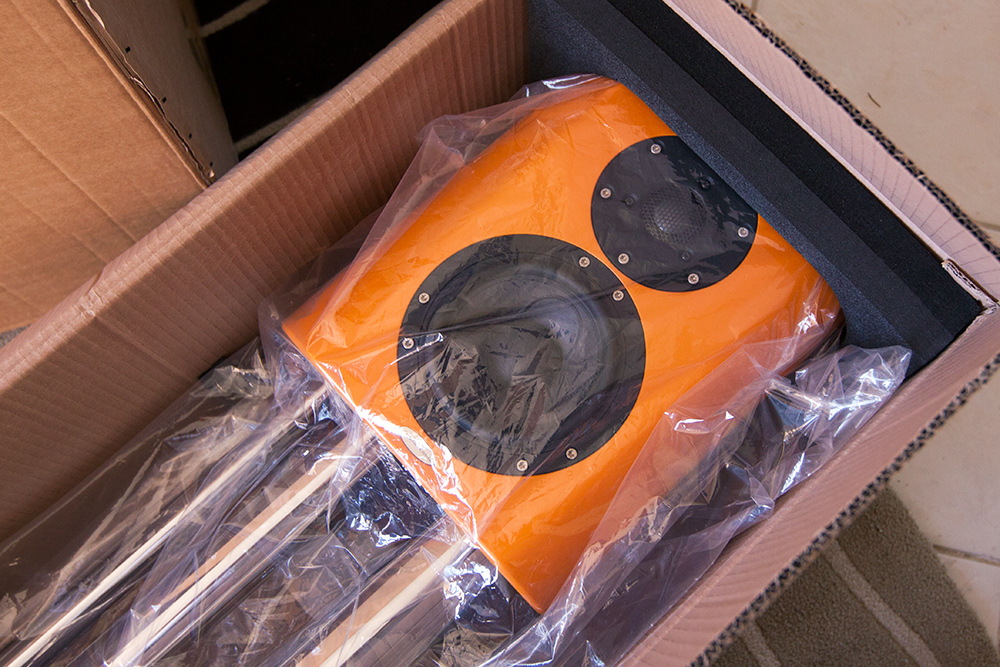 Even I was impressed with what I was looking at, despite having seen the speakers a few times already at shows. Once you have them in your home, they look even better. And when you can look closely at how they’re made and what they’re made of, they excite you more. Notable features include the swooping shape of the cabinet, which, when you look from the top, resembles an apostrophe; the unique cabinet compound that's as dense as can be; the complement of top-end Scan-Speak drivers, including their beryllium-dome tweeter; the trio of sturdy, chromed legs, which are embedded into the cabinet (i.e., they don't come off); and the base that appears at first glance to be made out of the same stuff as the cabinet (I have to check come write-up time), finished as perfectly as the rest of the speaker is. Then there's that orange color, which just sets the speaker off beautifully -- it's bold and striking, yet tasteful. The whole thing radiates luxury. 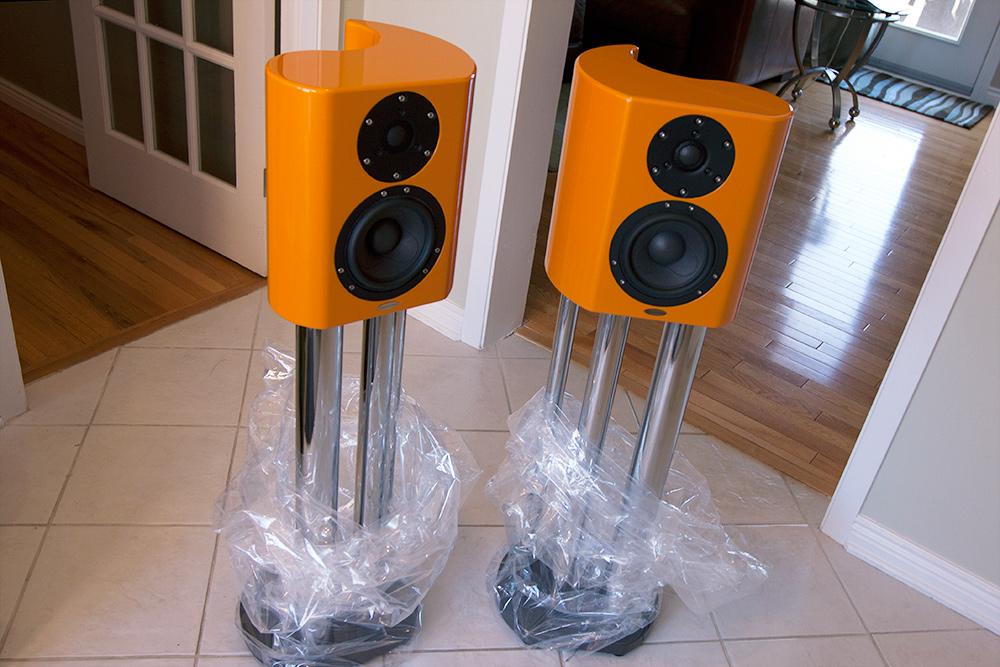 Not really surprising, though -- that image of luxury has always been what Crystal Cable is about. Founded by Gabi Rijnveld in Holland (where they're still based) over a decade ago, the company began by making cables that were high-performing, but also unapologetically jewelry-like in appearance -- super-thin, silvery looking, and beautifully finished. The idea caught on (I use the company's interconnects, which I find to be excellent, along with sister brand Siltech's speaker cables), and the company soon debuted its first speaker, the Arabesque, which also had jewelry-like appeal, due mostly to its uniquely shaped, all-glass cabinet. It, too, caught on. Now we're up to the Minissimo, which, as I mentioned, is here for review. 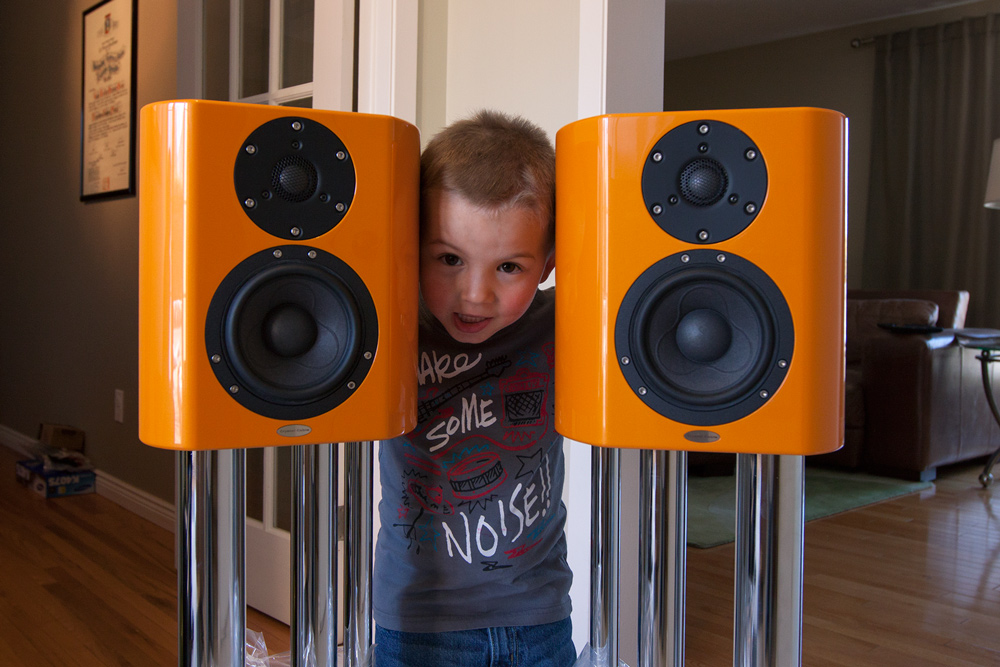 Reviewing, however, doesn't mean just looking. It obviously means listening, which is the next thing to do, and measuring, which, like the rest of the speakers I get here, will be done in the anechoic chamber at Canada's National Research Council, probably later this month. After that, I'll write the full review and then publish it on SoundStage! Hi-Fi. Right now I'm aiming to have it online by May 15, so check back then to find out if the Minissimo sounds as exceptional as it looks.