The Best of Both Worlds? Holter's Clear and Compelling Case for Hegel's SoundEngine Technology

Hegel Music Systems’ founder, Bent Holter, has such a deep knowledge of electronics that when he speaks on the topic, it’s easy for him to get so in-depth so quickly that what he says flies right over most people’s heads. I’ve seen it happen to others, and I’ve experienced it myself -- eyes glaze over.

Bent knows this, though, so he’s worked very hard to make his SoundEngine technology explanation at least a little more understandable for most people. It’s the core technology employed in all the company’s power and integrated amplifiers, so he really needs everyone to comprehend it in order to better understand how his amplifiers work, and how they differ from others out there. He’s gotten really good at presenting this -- through his hand drawings and easy-to-understand verbal explanations, someone who knows little beyond how to work the power and play buttons on a CD player can get the gist of what SoundEngine is and why it’s important to the brand. 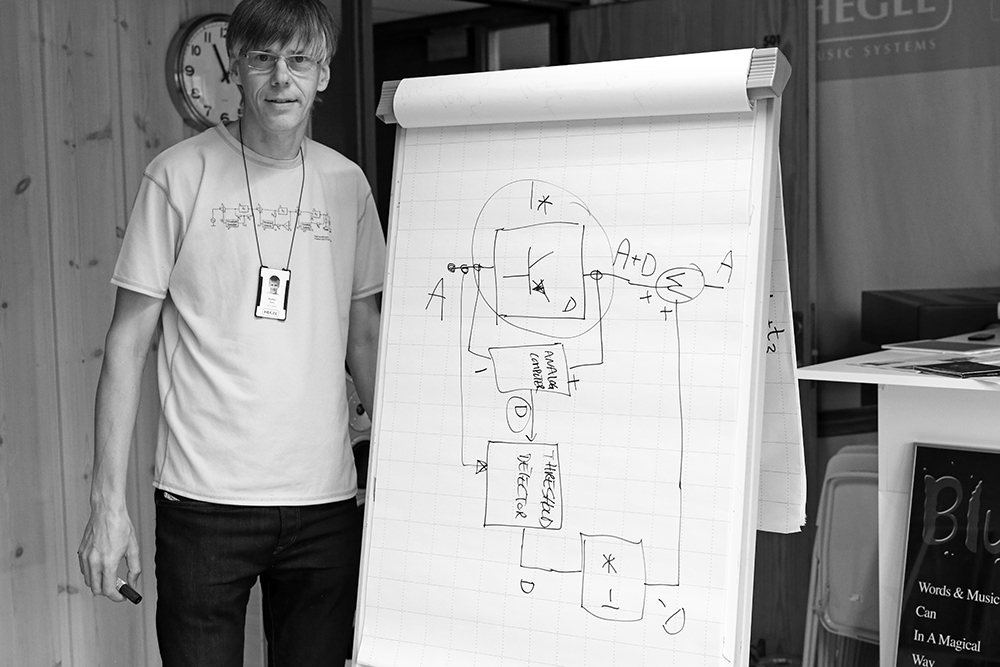 When Bent did his SoundEngine presentation for us at the Hegel office in Oslo, Norway, in June 2017, we were so impressed with his concision and straightforwardness that we knew it would make a great video. We interviewed him about it, re-created his drawings using computer graphics, and packaged it into a YouTube video called “How Hegel’s SoundEngine Works.” (I encourage you to watch it before you read more of this article.) Then, on August 23, 2018, in a special press and dealer event Hegel held at the Ritz Carlton hotel in White Plains, New York, I was able to witness the presentation again. Fellow writer Hans Wetzel was also there and he, too, was impressed with how well Bent explained SoundEngine. 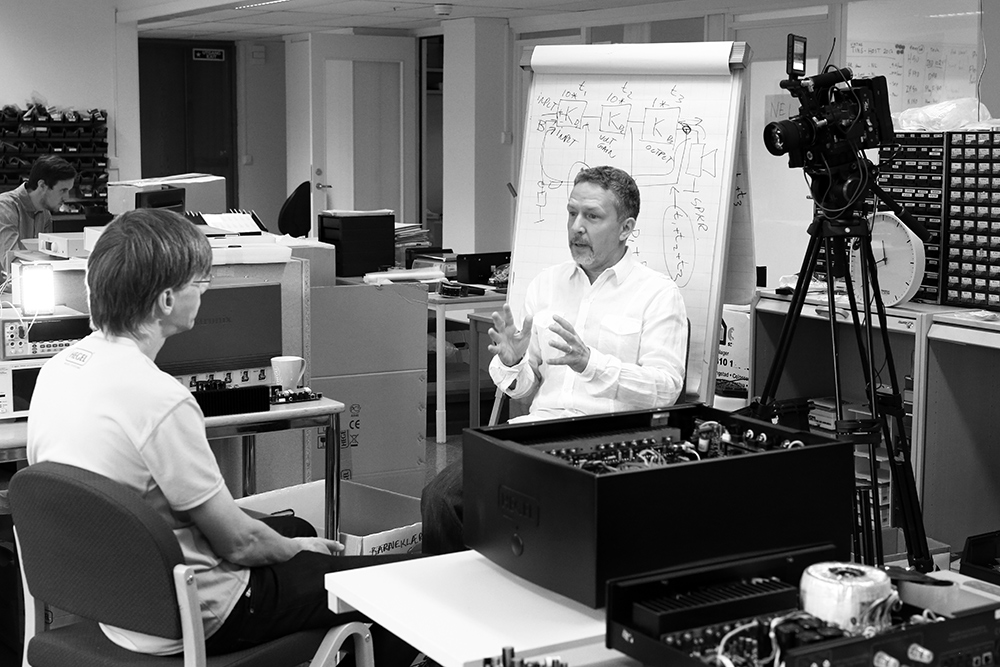 If you’ve just read on without first watching the video or haven’t seen Bent doing his thing, I will give you this brief explanation: Most hi-fi amplifiers have multiple amplification stages within them and use some sort of negative-feedback loop in the circuit to help to correct for distortion that occurs during the various stages, and which is usually amplified as the signal moves from one stage to the next. With global negative feedback, the loop connects the end of the amplification stages to the beginning one, so that the inverted-phase signal from the output can be applied to that initial stage in an attempt to correct the distortions coming out the opposite end. There’s also local negative feedback, which is similar to global negative feedback, but the feedback doesn’t go from all the way at the end to all the way back to the beginning; rather, it usually runs from the output of an amp stage back to that stage’s input. Most amps have multiple local feedback loops, with each being shorter than a global one.

The common thing for both global and local feedback is that they both attempt to fix an error after it has occurred by sending a correction signal back to the input of the stage or the amp. That’s why it’s called feedback. And it can work some magic -- with negative-feedback-based amplifiers, total harmonic distortion is usually markedly lower than without feedback. How low the distortion falls is often related to how much feedback is applied. But it’s not quite that simple or always that effective . . .

Just as in movies like Back to the Future, where the characters travel back in time to correct a mishap before it occurs, in audio, if you try to fix something after it’s happened, something else can get messed up. As a result, in a typical negative-feedback scenario, global or local, while distortion is lowered, time-based distortions are introduced because it takes time for the signal to pass through each stage, then time again to feed it back and go through the amplifier again. Thus, the correction signal can never be perfectly synchronized with the input signal. With a global feedback system, the timing errors are usually worse than with local feedback because the entire feedback loop is longer, but in both cases the timing errors are still there. 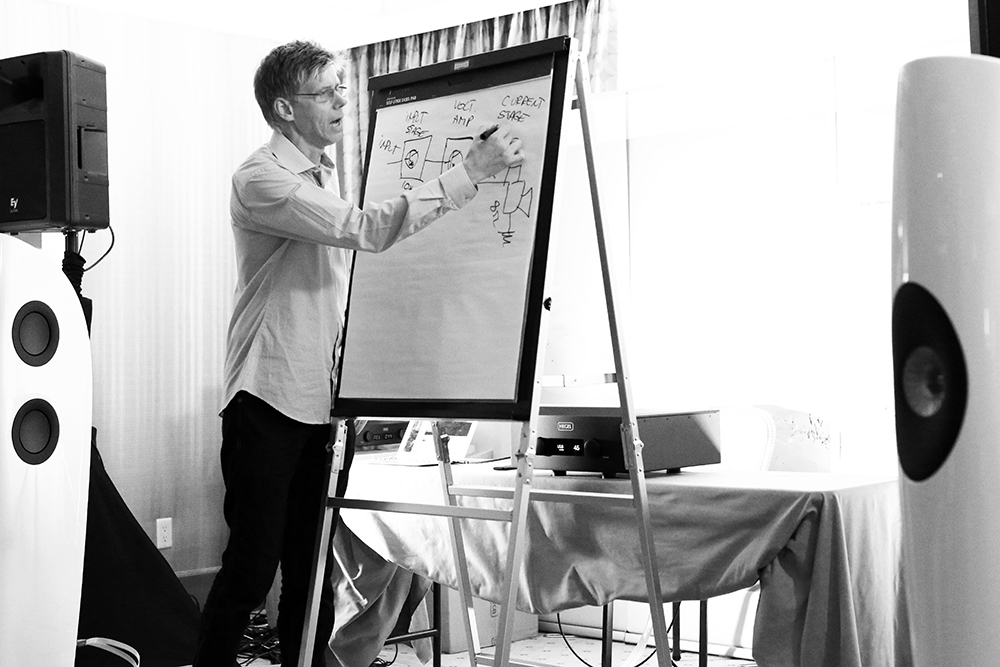 Still, negative feedback, even with the introduction of timing errors, isn’t the worst thing in the world. In his White Plains presentation, Bent pointed out that time-based errors that negative feedback introduces aren’t that critical for the lowest frequencies of the audioband. “For subwoofer amplifiers,” he told us, “it’s a really good approach.” But as frequency increases, it becomes more and more problematic and also less effective. “Negative feedback doesn’t work well at higher frequencies,” he said, “which is why you often see distortion rise as frequency increases.”

One way to eliminate the problem of timing errors is to use no negative feedback at all -- and there are some amplifiers out there that claim to use zero or nearly zero negative feedback. The problem is that the harmonic distortion of these amplifiers is usually quite a bit higher than it is for negative-feedback-based amplifiers. We see that all the time with amplifiers Bascom King measures for us -- and he usually comments on it. So there’s a trade-off.

Back when, Bent wanted the best of both worlds -- the distortion reduction that feedback can provide, but without the timing errors. To do so, he invented SoundEngine technology in the 1990s, and he obtained a patent for it in 2001 under the name “Multistage Amplifier with Local Error Correction.” The simplest way to explain how SoundEngine works is to say that it uses feedback, but instead of feeding the correction signal back into the circuit at some point, it works between each stage and feeds the correction signal forward, before the main signal gets amplified by the next stage. According to Bent, the SoundEngine circuitry takes into account the phase relationships of the main and correction signals, so no time-related distortions are created. Also, according to Bent, SoundEngine circuitry works to fix all types of distortions, not just harmonic distortion -- he says that intermodulation distortion is reduced, as is the pesky crossover-type distortion that occurs in class-AB amplification when the signal passes from one transistor to another as the waveform goes from positive to negative. It’s beyond the scope of this article to define all these types of distortions in detail, but just know that most agree that when it comes to amplifiers, having less distortion is better than having more -- providing you aren’t introducing or increasing other types of distortions in doing so.

Bent also claims that SoundEngine increases both the dynamic range and the damping factor of the amplifier. The former allows for more differentiation between what’s loud and what’s quiet, which tends to make music sound more alive and real. The latter offers better control over drivers, particularly woofers, which usually makes the bass tighter and cleaner. 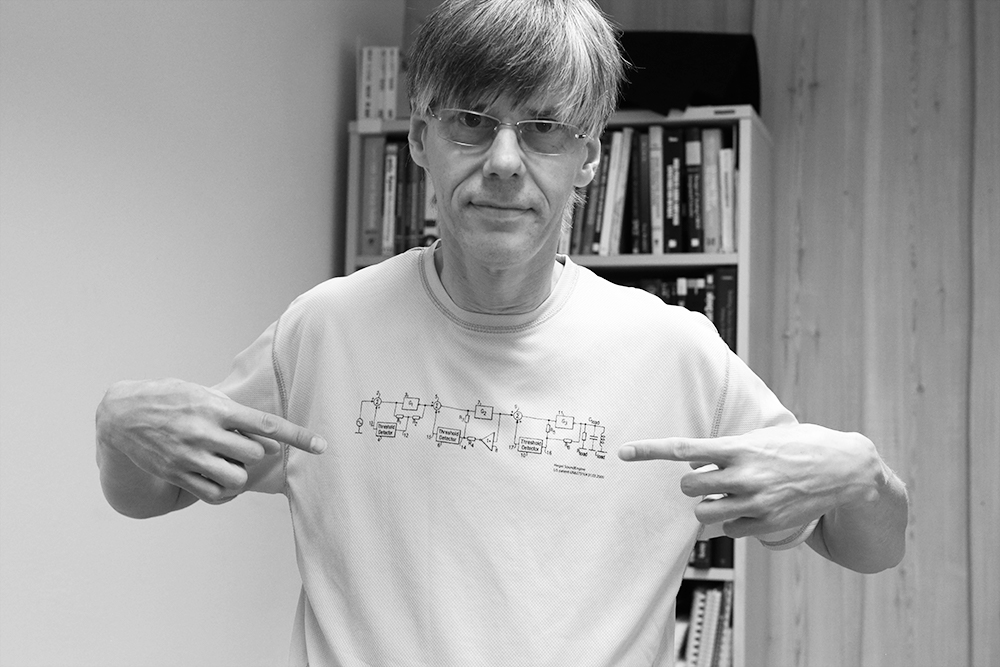 Bent’s shirt with the SoundEngine patent diagram on it

Does it work as well as Bent says? That’s impossible to state with certainty, because the performance of any amplifier is the sum of all its parts, and not dictated solely by any one design feature. But what I do know is that we’ve reviewed a number of Hegel amps and every writer has remarked about how clean, dynamic, and visceral they sound compared to most other amplifiers. What’s more, our reviewers have also never heard a Hegel amplifier that they didn’t like, which isn’t to say that all the Hegels have gotten rave reviews, but no one has been disappointed -- so Hegel must be doing something right. I’ve heard the differences too, having experienced their H30 power amplifier and H80, H190, and H360 integrated amplifiers in my own listening room.

Will the H590 live up to what’s come from Hegel before? Look for the full review on SoundStage! Hi-Fi on October 15.