A group of engineers started dCS, so it's not surprising to learn that the core of dCS still lies within the engineering lab. The engineers' mandate is to create products that can not only produce superb measurements but also be considered state of the art and deliver the highest level of musical reproduction. As a result, every aspect of the design is done in-house. 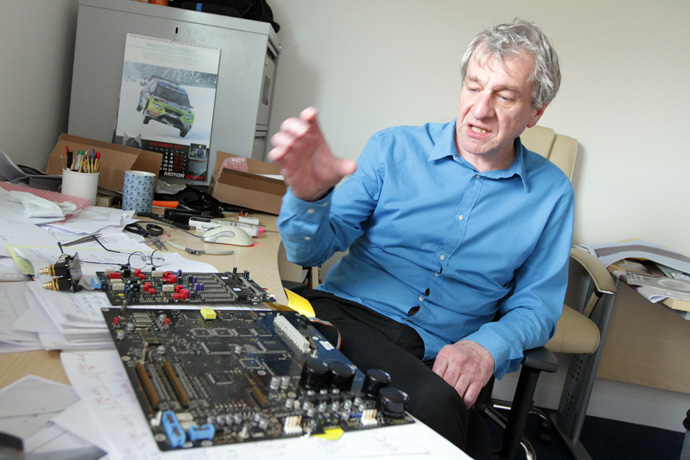 Chris Hales's title is Director of Product Development, so he oversees everything dCS produces. Chris has been with dCS since 1998, and he's exceedingly proud of the company's product quality, innovation, and constant pursuit to advance all aspects of design. They've chosen a unique path for the development of their products that most other companies don't follow -- most of dCS's products are based on what they call the "control board" (in front). The control board is to dCS products what a motherboard is to computers -- it controls all the core functions, which, in the case of a high-end-audio product, include all digital signal processing such as re-clocking and upsampling, among many other functions. The Debussy, Puccini, Paganini, and Scarlatti products all use the same board. The advantage of this approach is that product development is quicker and less prone to bugs and defects because the control board is so well tested and extremely well understood by the engineers. The disadvantage is that the board is very complex and quite costly, meaning the parts cost of a dCS product will always be fairly high. 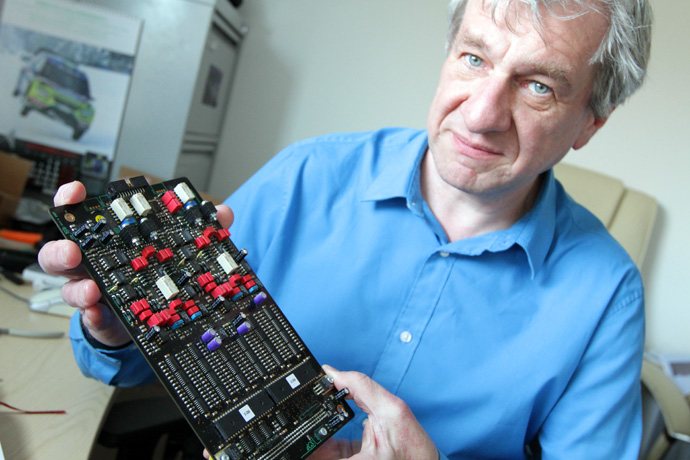 Chris holds up what the engineers like to call the "analog board." The truth is that it has digital and analog sections. The bottom part of the board contains dCS's famous Ring DAC, which uses discrete components and features a 5-bit architecture that runs at 2.82 to 3.07MHz. This patented DAC is the company's main claim to fame. The top portion of the board is the balanced analog stage, which runs in pure class A and feeds the balanced and single-ended outputs. As with the control board, Debussy, Puccini, Paganini, and Scarlatti products all use the same analog board. 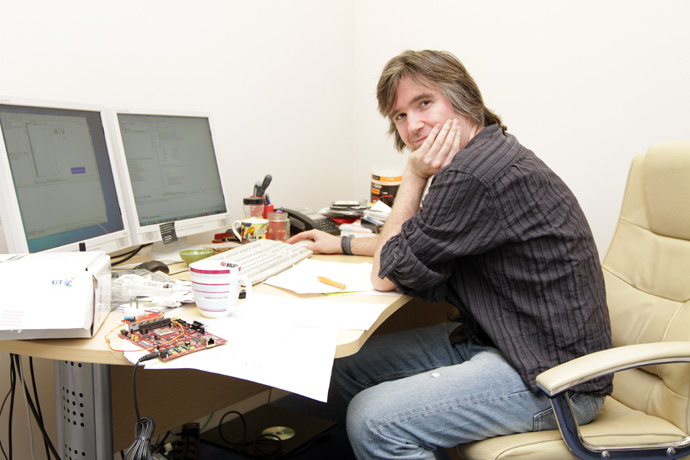 Andy McHarg's title is Technical Director -- he's considered dCS's digital guru. Andy performs many tasks such as overseeing all the software development for their products, so we had a question for him: What exactly does upsampling mean? Suffice it to say that the detailed answer is too long to repeat here. I'll just say that it's not what most people probably expect it to be. He's also the clever guy behind dCS's recent announcement that they figured out a way to stream DSD music data over any DAC that supports a 24-bit/176.4kHz PCM connection. DSD is the underlying data format for Sony's SACD, and the dCS's technology to stream it across a 24-bit/176.4kHz connection is entirely software based. What's more, dCS made it open source, so other companies can implement it if they like. The implementation of this technology might help give DSD a second wind. 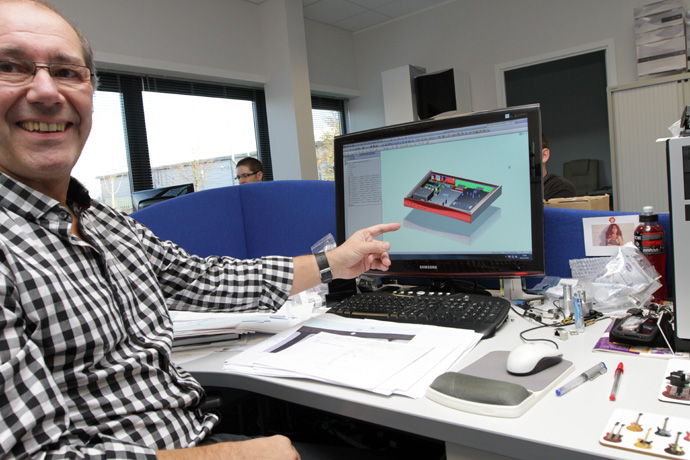 Is there a saying, "A product is only as good as it looks"? If so, Ray Wing might have said it first. Ray's title is Head of Design, and he's the person behind the look and construction of every dCS since the Verdi. He's also most recently responsible for the elegant-looking Debussy DAC. He has some new ideas in store, but it's too early to share them. According to the folks at dCS, something very special is coming from Ray and the rest of the engineering team. 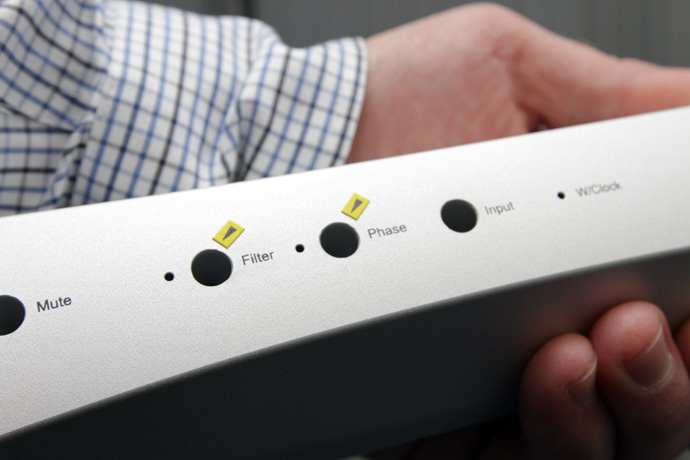 Even though Ray is a designer, his work doesn't stop at his department's door -- it extends into the production area as well. To the untrained eye this Debussy faceplate might look perfect. But to Ray's eyes the Filter and Phase holes aren't quite true. As a result, it's a production reject and the cause of the error must be thoroughly examined and, of course, remedied. Perfection is a common word at dCS. 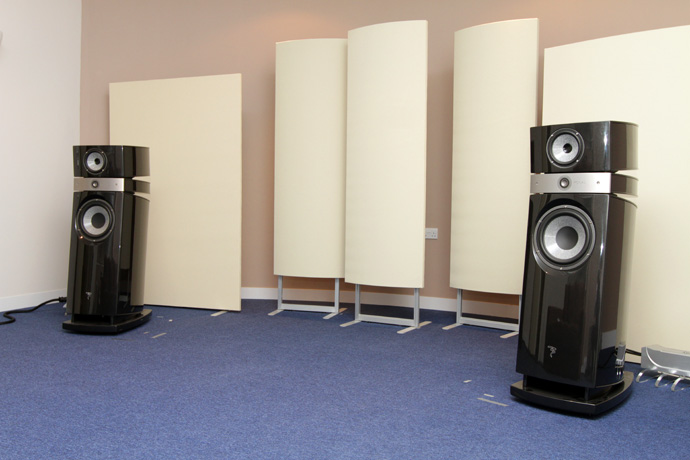 Of course, design doesn't stop in the engineering labs. dCS recently built a new listening room for testing and evaluating their products. They have numerous loudspeakers on hand, but during our visit they had the Focal Scala Utopias set up. 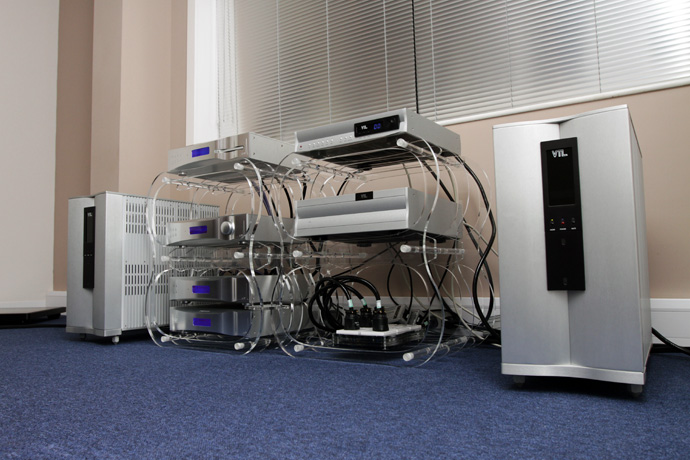 The rear of the listening room showcased a full Paganini stack along with amps and a preamp from VTL.