More speakers! Such a diverse group -- so many ambitious designs, all coming from different countries. Audio Video Show 2019 was noticeably larger than the 2018 version, with more exhibitors, more products, and what felt like a greater number of attendees. And that meant lots of multicultural speakers for us to cover. 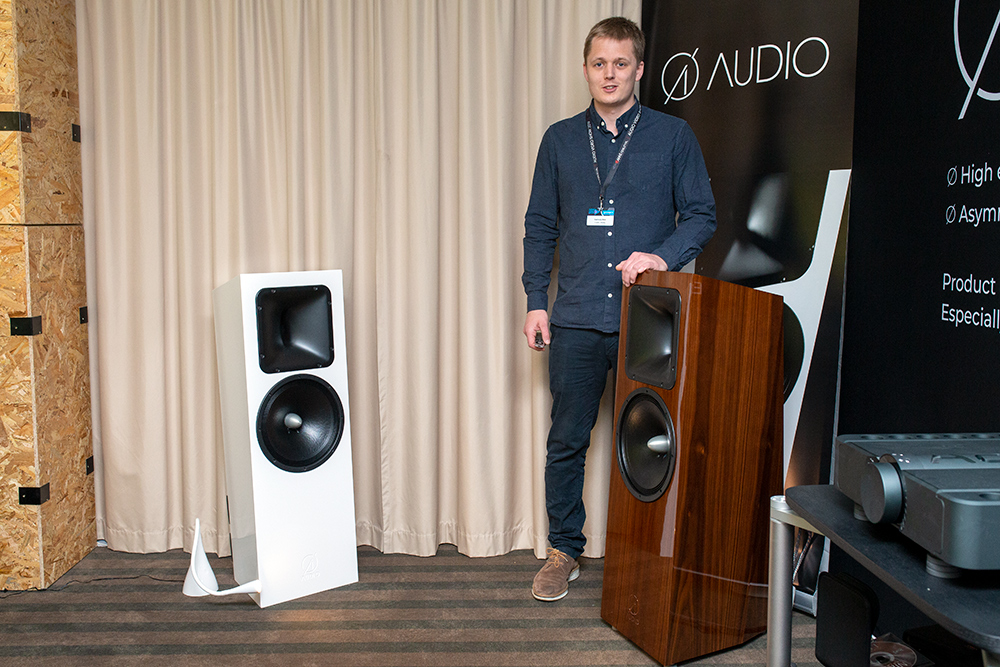 Here’s Sveinung Mala, from Ø Audio, out of Norway, next to his Icon loudspeaker. The Icon is a high-efficiency horn speaker that’s designed with neutrality as its paramount characteristic. That horn is a 3" compression driver, while the woofer measures 12". The Icon is quoted as 93dB sensitivity, with a minimum impedance of 8 ohms, so an easy load for a low-powered amp. 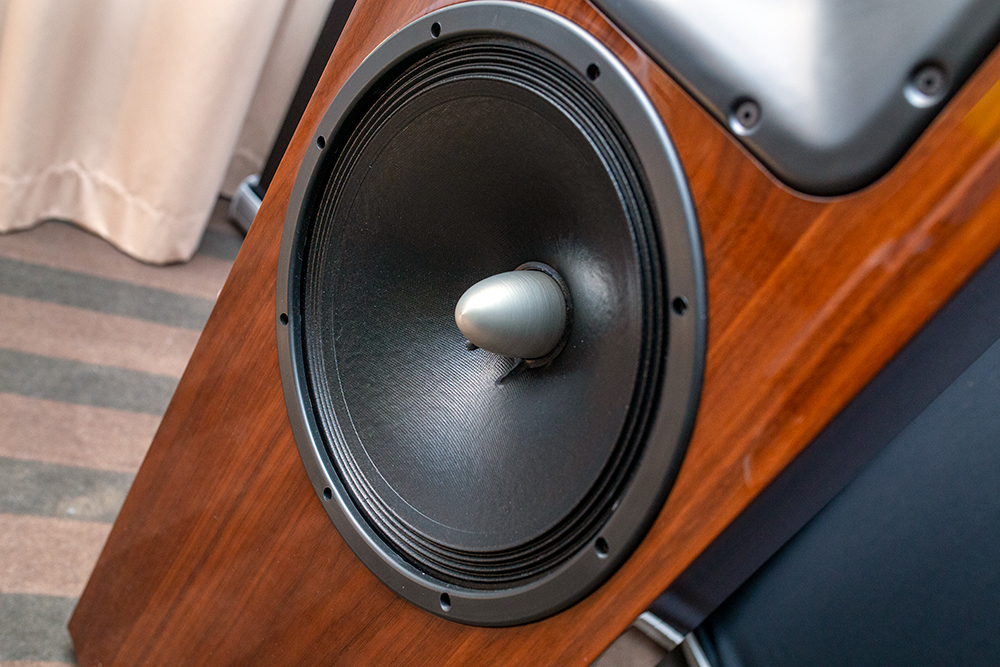 While the Icon is physically quite large, it’s also extremely handsome in its walnut finish. Of note is the enclosure’s lack of any parallel surfaces. The Icon retails for €8999 per pair in black or white gloss, or €9999 per pair in high-gloss or matte walnut veneer. 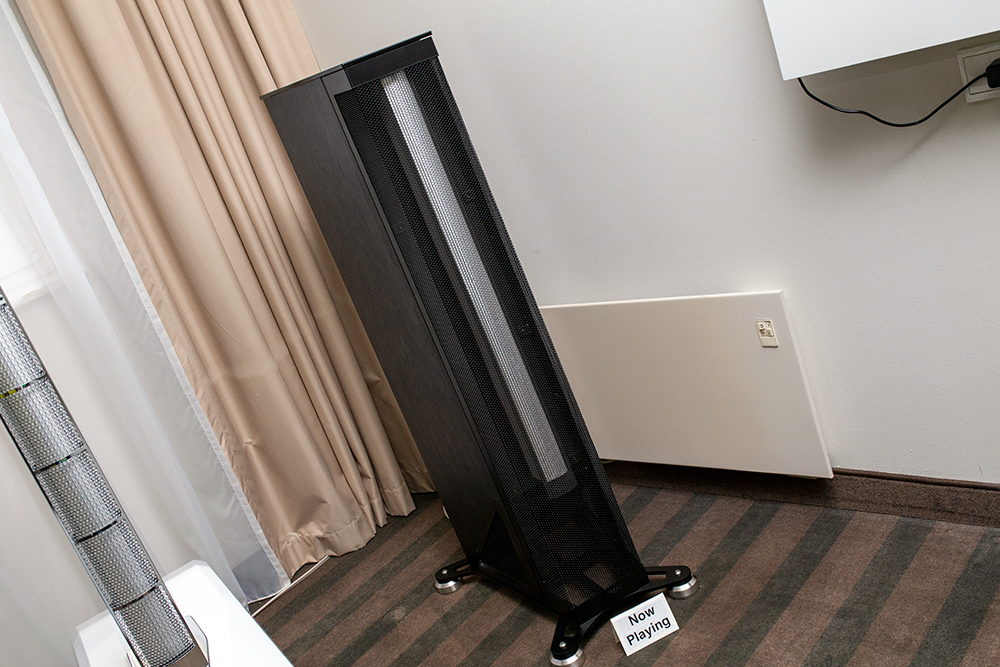 At last year’s Audio Video Show, we reported on the Hypostatic Indigenum (far left in photo above), which was perhaps the most unique looking speaker at the show. It was also quite expensive given its complex enclosure formed out of synthetic stone.

This year, Hypostatic was showing its Verus speaker, which uses a conventional MDF cabinet but still employs the same “curved magnetostatic driver.” Along with that long tweeter, the Verus uses an 8" woofer that fires out on an angle from the bottom front of the speaker. 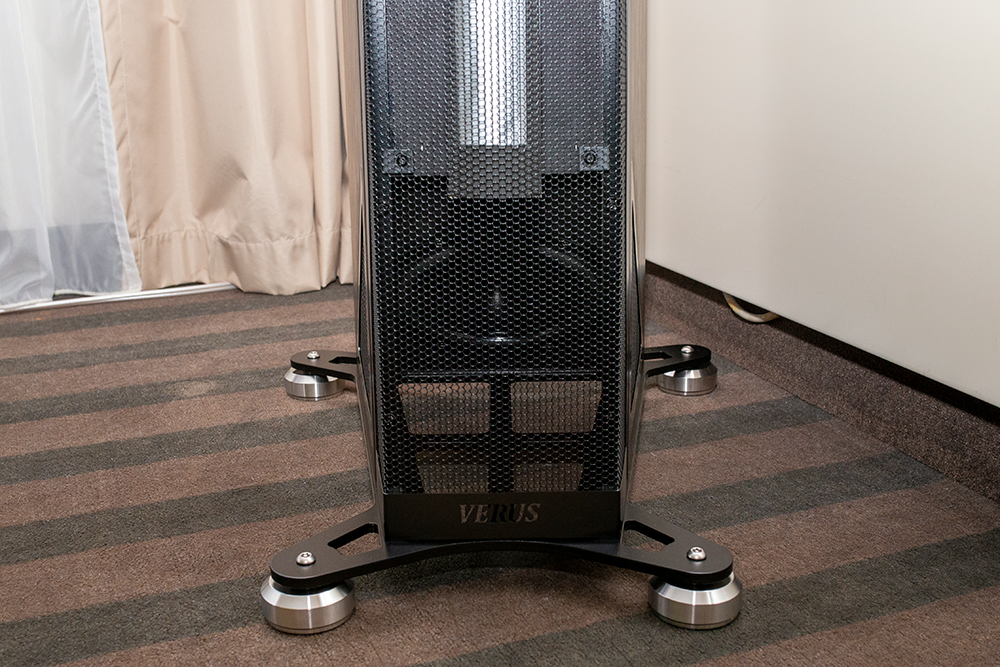 The Verus is available in matte birch veneer for zł22,210 per pair, or polished lacquer for an additional zł1708 per pair. 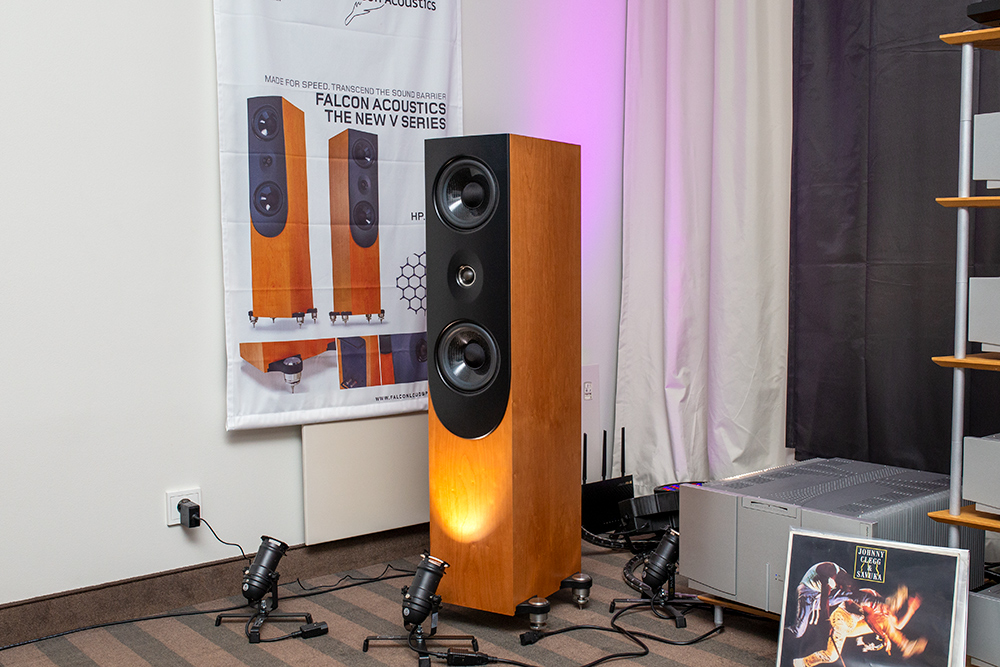 If you can’t have fun at work, where can you have fun? The chaps at Falcon Acoustics seem to have embraced that motto. Their new V-series speakers, of which the HP.80 loudspeaker is a member, are all named after British military aircraft that were part of the V Bomber Force, which were made by Handley Page Limited. The HP.80 was the Victor, and hey -- it’s a cool name that delivers a sense of history to this British company.

The bomber convergence makes its presence known by the handles at the back of the speaker, which were part of the plane’s structure, and the front baffle, which mimics the bombsight. The HP.80’s two 7" midrange-woofers (this is a two-way speaker) are made in-house, while the tweeter is sourced from Scan-Speak.

Of note is that all components in this speaker are sourced from the EU, and the vast majority from the UK. The HP.80 starts at £12,999 per pair in cherry veneer, and the price increases for other finishes. 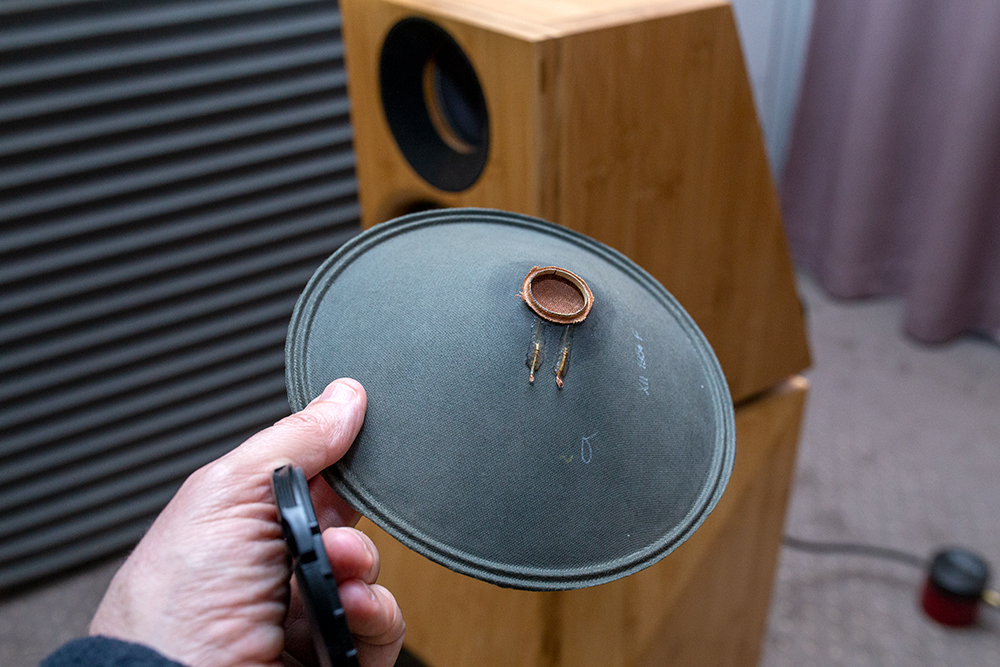 I held in my hand one of the midrange cones used in Avatar Audio’s Holophony Number Two speaker and was quite startled. First off, it felt quite literally like it was made from a sheet of paper. Light and almost flimsy. Then I pushed down on the perimeter while holding the narrow end in my other hand. It was very stiff -- quite a contradiction. Then I noticed the stamp on the back -- this thing was made in 1953 . . . 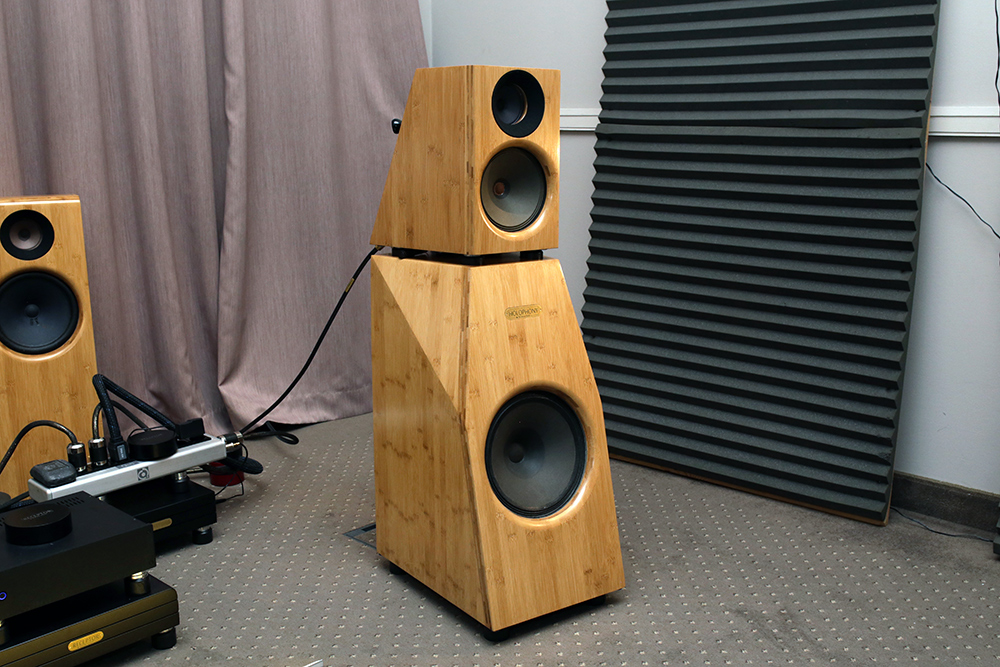 In fact, all of the drivers used in the Holophony Number Two, which retails for zł9480 per pair, were rescued from a stash of old speakers from the 1950s, ’60s, and ’70s -- and Holophony has a good stock of them, both as backups for repairs and for new construction. The Number Two’s driver complement is one 4" cone tweeter, one 8" midrange, and one 12" woofer. The cabinets of the Number Two are made from bamboo, and considerable effort has gone into the speaker’s crossover, which was designed by ear. 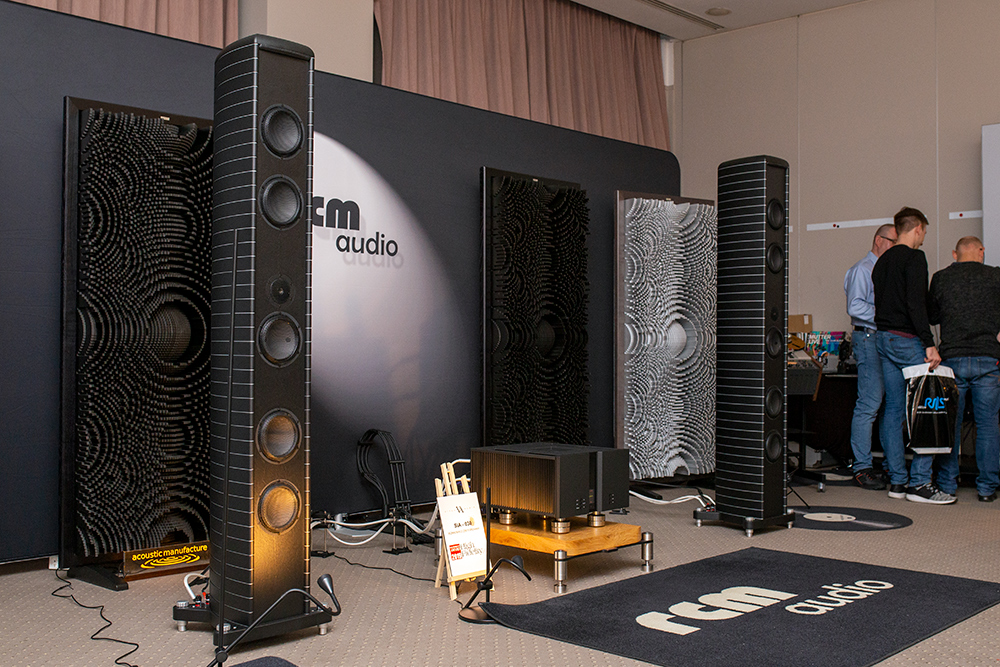 The Gauder Akustik DARC 140 is a seriously large speaker. Due to the high volume of visitors to the room, we had difficulties obtaining specifics about this speaker, but some facts bled out to us from the depths of the crowd noise. It’s taller than me, and it likely weighs a lot more. It’s a serious speaker, exclusively employing Accuton drivers. The cabinet is made from numerous slices of aluminum stacked horizontally, each 1.57" thick, with fiber gaskets between each section torqued together by long bolts that are fed in from top to bottom.

There are other interesting features. The ports for the four bass units are, uniquely, on the top and bottom. Then there are the crossover slopes for all drivers -- an astonishing 60dB per octave. To achieve these incredibly steep slopes, Gauder Akustic’s chief designer, Dr. Roland Gauder, told us he relies on super-high-powered computers to do all the complex calculations. 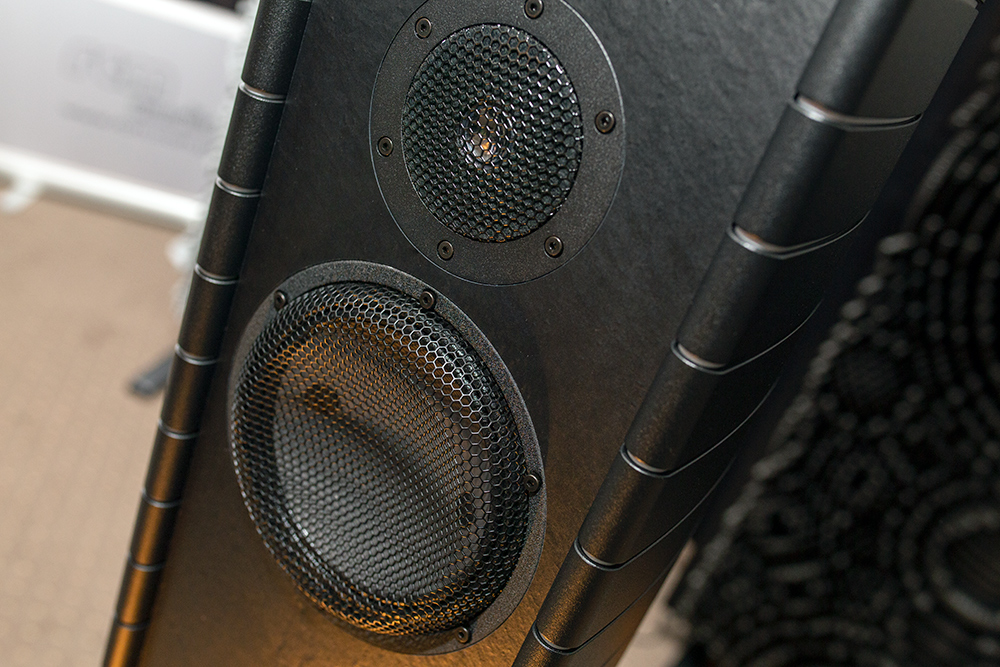 Since each DARC 140 is made to order by Gauder Akustic, located near Stuttgart, Germany, the speaker can be ordered in any finish imaginable -- painted, anodized, or brushed. Prices for the DARC 140 start at €80,000 per pair with a ceramic tweeter, and go to €88,000 per pair when equipped with a diamond tweeter, which is what the pair in Warsaw had. 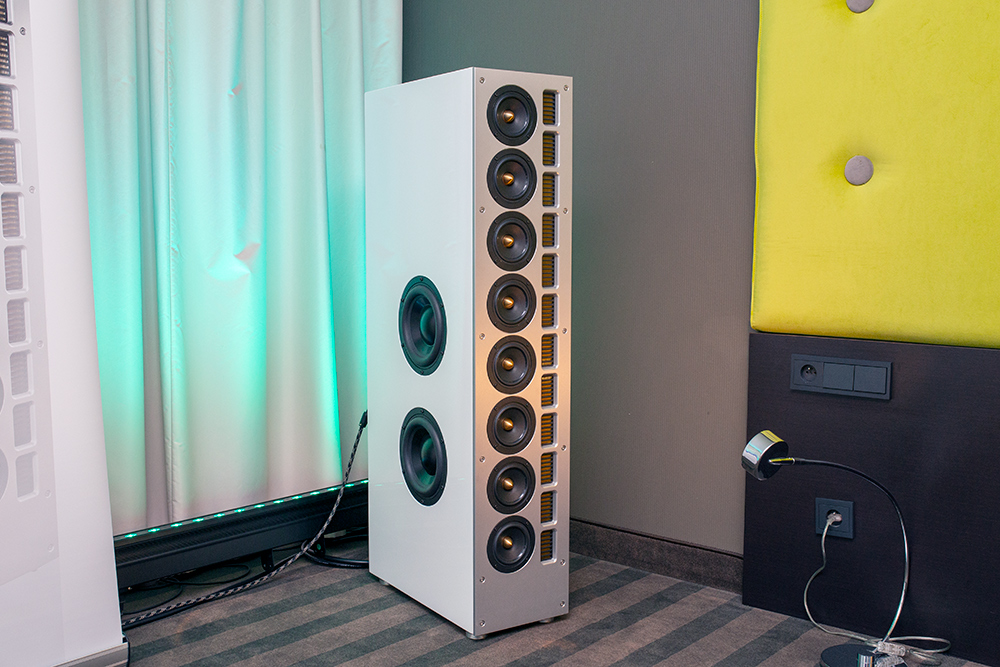 Some speakers offer more for the money than one might expect. We encountered the Fein Audio V3 without any accompanying backstory, and without having experienced anything else of this scale from this company.

We had a number of questions about this ambitious product -- crossover frequencies, driver sources, cabinet construction -- however, we weren’t able to rustle up an English-speaking representative. That’s the way it goes at shows sometimes. But we were able to come up with some information because we definitely wanted to include it in our coverage.

The V3 is obviously an ambitious speaker with a large driver complement -- eight midrange drivers, 12 tweeters, and four bass drivers (two per side). It’s fully active, too, with a total of 750 DSP-controlled watts in the cabinet. The cabinet itself is made from MDF, but the front panel is constructed from CNC’d aluminum. There’s a lot here for €20,000 per pair -- but I wish we knew even more!