I’ve never been to Poland’s Audio Video Show (AVS) before, but I’d heard great things about it. However, that still didn’t prepare me for the size, scope, and scale of AVS 2016. With three locations in Warsaw (the Golden Tulip hotel, Radisson Blu Sobieski hotel, and National Stadium) and more than 160 exhibit rooms (from stats I read, last year there were 150 rooms and in 2014 there were 104), it was jam-packed with so many people that I had trouble getting pictures at times -- or even into some rooms. As far as I know, it’s now the second-largest show in Europe (High End is number one), and it could already be in the top five in the world. I am already looking forward to what 2017 will bring!

This first article focuses on the product category that’s the most popular with our readers -- loudspeakers. These products are all relatively new and haven’t yet made it into any of our previous show reports. All of the prices are in euros. 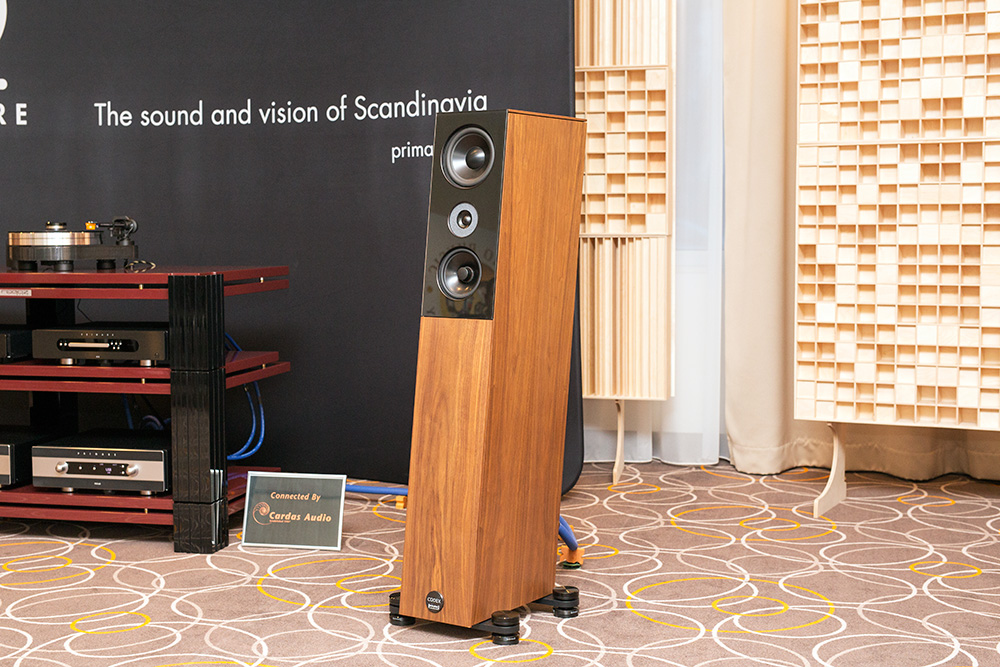 The first loudspeaker I looked at was the Codex, the latest model from Audio Physic, which is based in Germany. The Codex is a four-way design that has its woofer placed within the lower part of the main cabinet in a subenclosure, better isolating it so its resonances don’t affect the rest of the cabinet as much. Another interesting design feature is the use of . . . 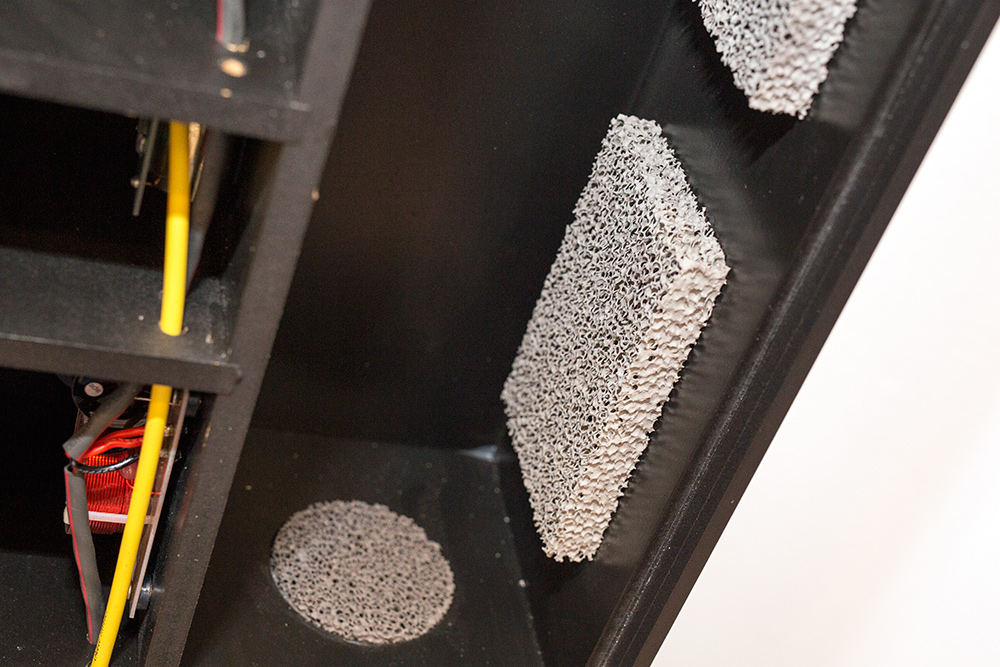 . . . ceramic foam on the side walls of the cabinet, as well as within the front-mounted port and the cabinet’s internal vents. Ceramic foam is stiff, but at the same time highly porous (90% air, I was told), so it takes up less space than a solid block would, and it can also let air pass through. Used on the walls, it increases stiffness without chewing up too much cabinet volume; within the port and vents it helps to reduce the noise of the air as it passes through. In standard finishes, the Codex starts at €10,000 per pair (the company offers many other finishes, including glass, which raises the price). 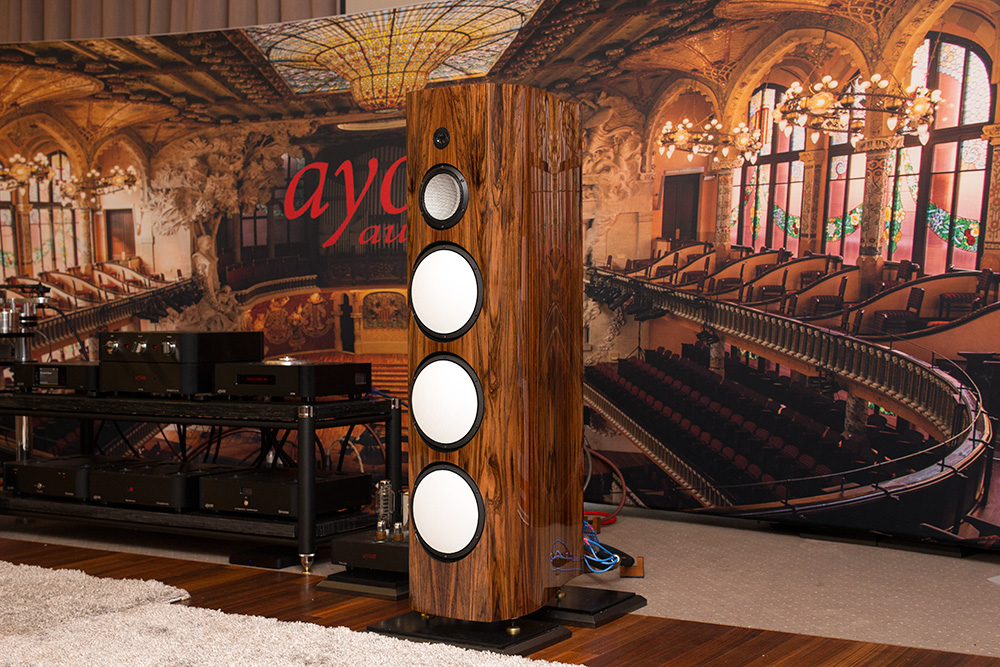 Lumen White, which is headquartered in the United Kingdom, unveiled the Lumyere, a large three-way floorstander with a luxurious-looking wood finish and some of the most advanced ceramic-diaphragm drivers on the market today. Unfortunately, no one from Lumen White was present at AVS 2016, so I could not get any additional information, other than the price: €120,000 per pair. 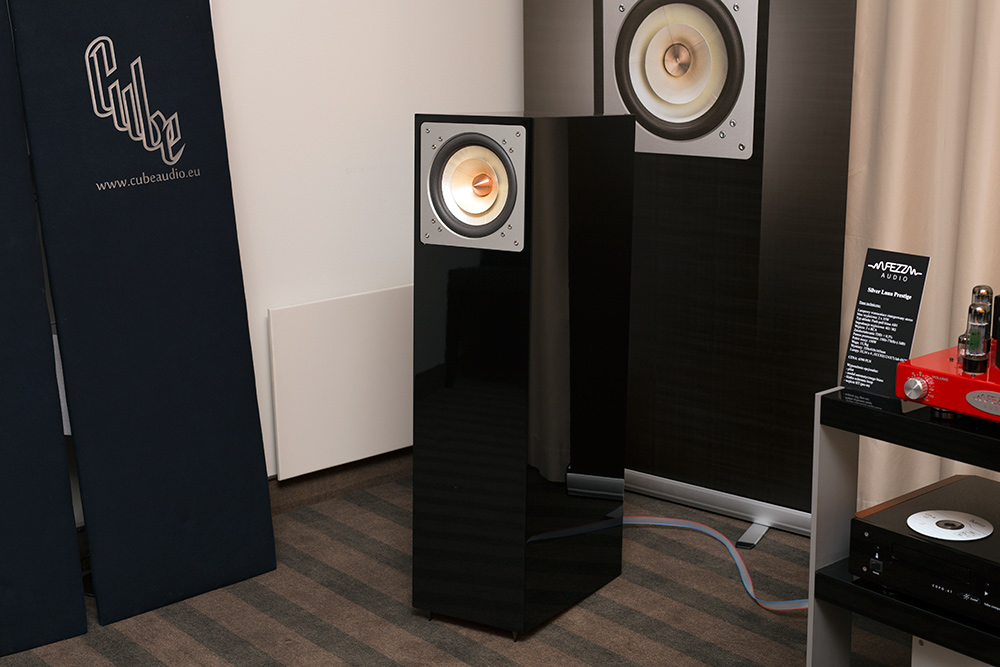 I often give single-driver-type speakers a cursory look and then move on -- they usually sound really bad, so I don’t want to stick around. But Cube Audio’s Bliss C was different because it sounded very natural overall and had bass extension that stopped me in my tracks. As a result, I stuck around, listened more, and finally asked some questions. I learned that every part is made in Poland, which is where the company is based, including the full-range driver. I was also surprised when I saw a frequency-response chart showing that its frequency response was fairly flat, both on and off axis, with good high- and low-frequency extension. If you’re into single-driver speakers, the Bliss C is likely worth checking out -- it sells for €6000 per pair. 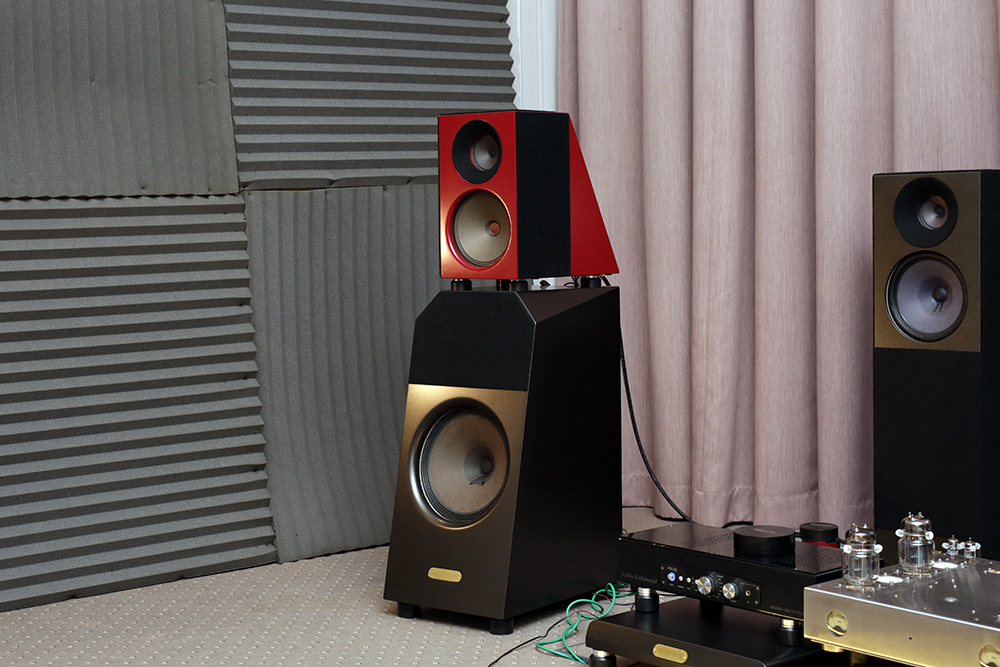 Usually, manufacturers are trumpeting the latest and greatest technologies in their products. Not so with Poland’s Avatar Audio, makers of the Holophony 2 three-way loudspeaker, which sells for €11,400 per pair. Instead, the literature for it proudly proclaims the use of “original drivers from the ’50s and ’60s.” But you know what? It sounded very good -- fairly well balanced from the high to low frequencies, as well as open and airy. Color me impressed. The Holophony 2 has . . . 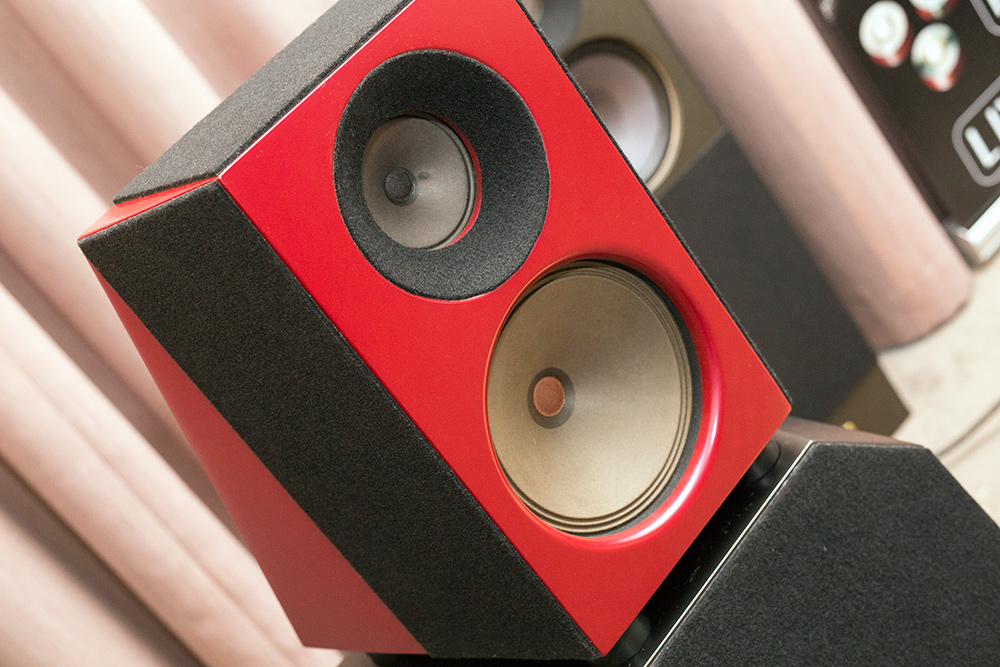 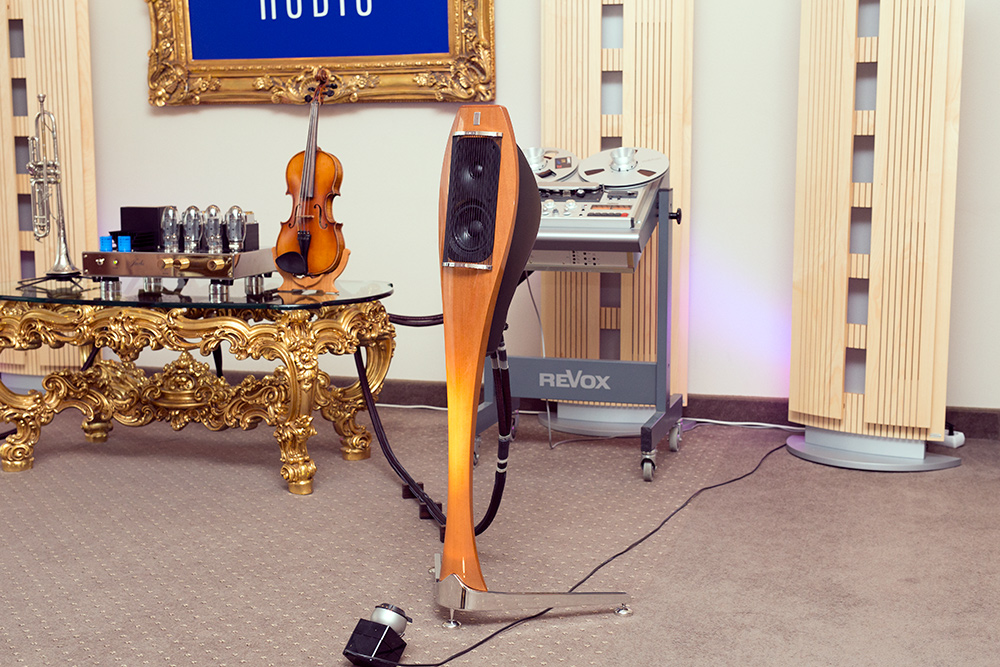 The latest creation out of the Franco Serblin Laboratorium, in Italy, is the Lignea, a two-way speaker with a 1.1” soft-dome tweeter and a 4.3” midrange-woofer, married together with a first-order crossover topology. The entire cabinet and main part of the integral stand are made of wood, while the bottom of the stand is stainless steel. The Lignea comes in a wood or black finish, and both looked beautiful to my eyes. I looked around back and . . . 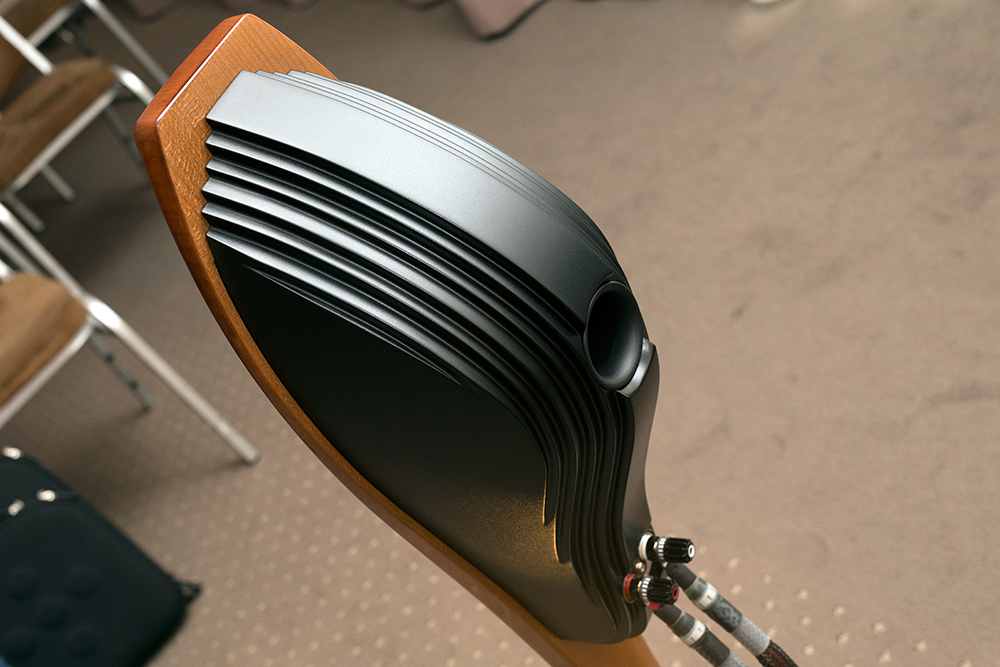 . . . found a fully rounded enclosure housing the drivers. It’s designed that way to reduce driver-induced resonances and internal standing waves. The Lignea has just begun shipping, with a retail price of €4500 per pair.