I’ll conclude my coverage of the 2016 CEDIA Expo with a roundup of the rest of the interesting speakers I saw. All prices in USD. 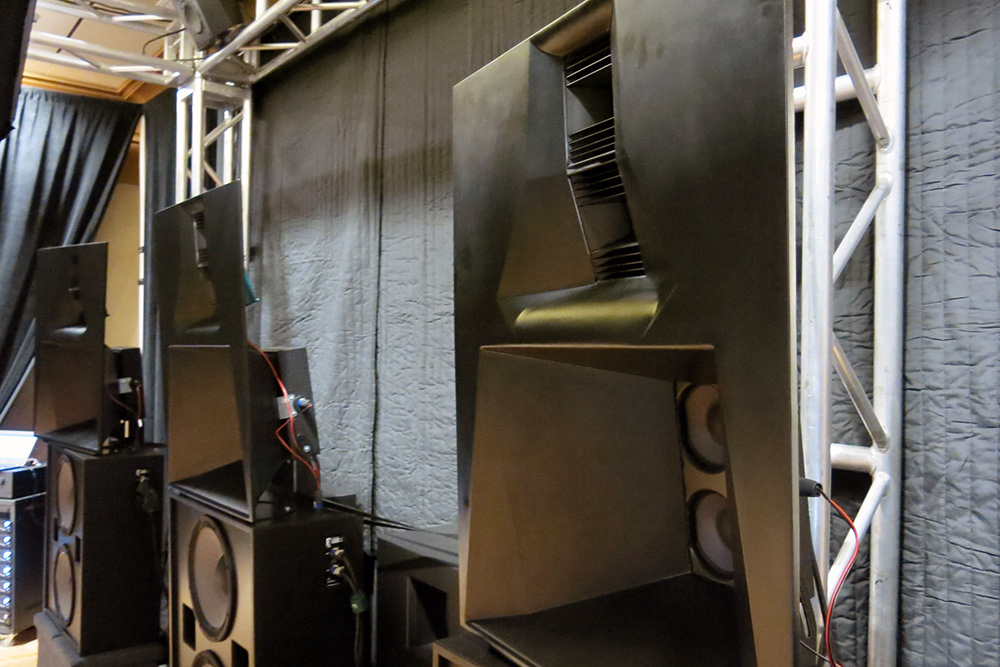 I’ve never been in a tank battle, but I’m pretty sure hearing Fury on the Alcons Audio speaker system at the CEDIA Expo is the closest I’ll get to that experience. This huge horn-based system included three CR3 front speakers (shown here), two 18” and two 21” subwoofers, and a total of 16 speakers used for surround and height channels. The system played at extraordinary levels with no apparent distortion or strain. Total cost of this system is around $125,000, but the company pointed out that this system was much more elaborate and costly than would be needed in most homes. 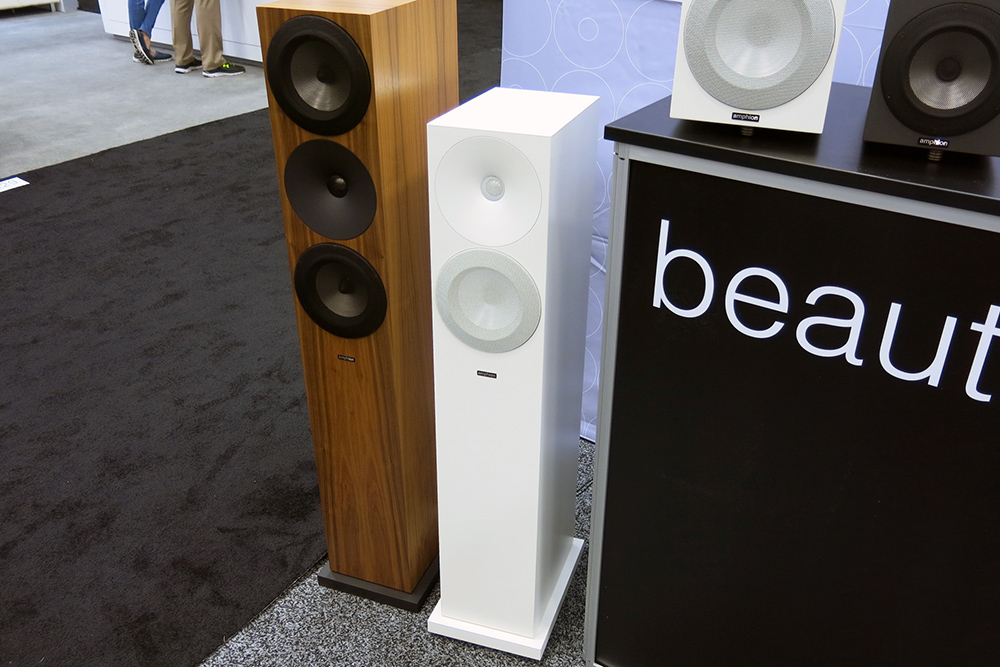 Amphion’s floorstanding Argon3LS (right) replaces the bass port on the previous model, the Argon3L, with a 6.5” passive radiator to reinforce the bass output of the 6.5” woofer. A 1” tweeter in a shallow waveguide provides the highs. The $3790/pair speaker is available in black, white, or walnut veneer, with nine different grille-color options. 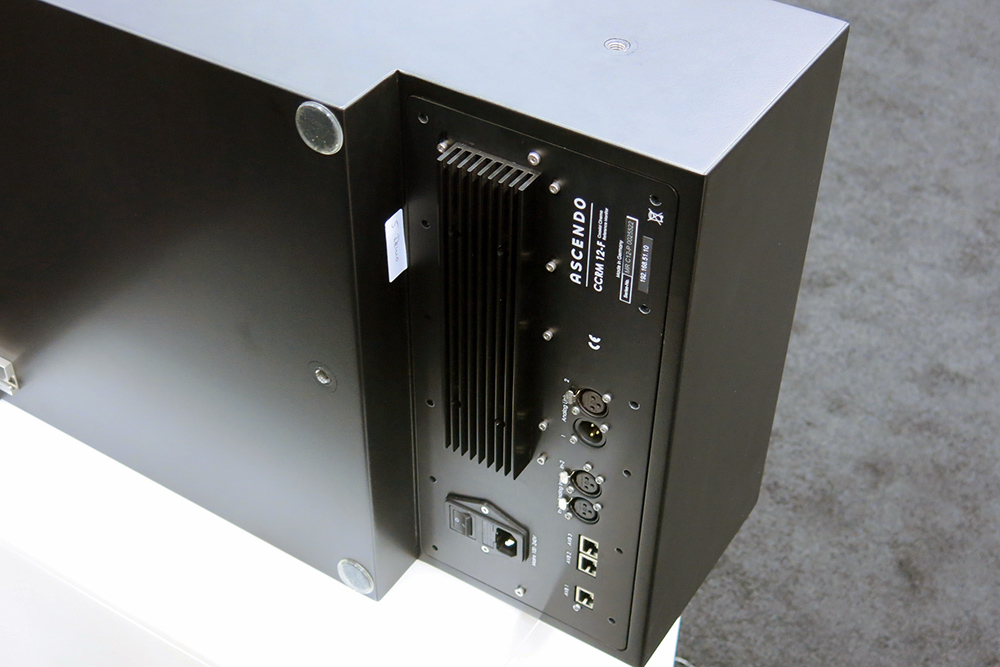 I expect the Ascendo speaker system might be the future of home theater, or at least of large, custom-installed home theaters. Each of the speakers incorporates a 1” compression horn driver inside a 12” woofer, each driven by a 500W amp and tuned using DSP. The neatest thing about them, though, is that the speakers can be networked using standard Ethernet cable, as an alternative to using the speakers’ conventional analog and digital connections. The booth used an adapter box to convert signals from a Trinnov Altitude32 surround processor to AVB (Audio Video Bridging) format for networking, but ideally, the surround processor’s numerous output jacks would be replaced with a single, standard RJ45 Ethernet jack. US prices were not set but should be in the range of $4500 per speaker, including the internal amps and DSP. 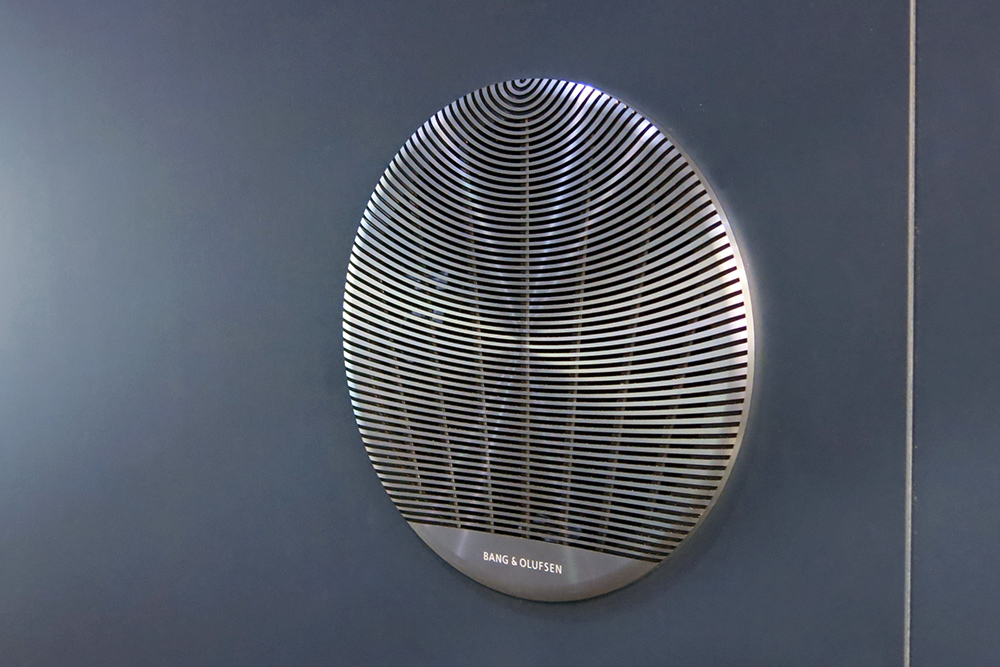 One of the biggest surprises of the show was the announcement of a partnership between lifestyle A/V manufacturer Bang & Olufsen and architectural audio specialist manufacturer Origin Acoustics, which has done the acoustical engineering for B&O’s new line of in-wall/in-ceiling speakers. The flagship is the BOC106, which retails for $700 each and incorporates a 10” woofer plus a pivoting module that holds a 3.5” midrange and a 1” tweeter. It can be used as an angled speaker for front left/center/right channels in a home theater, or as a conventional stereo speaker. The standard grille is a magnetically attached design circled by a brushed-finish metal ring, but the hot ticket for the stylish set will be the optional stainless-steel grille shown here, which will add about $500 per speaker. 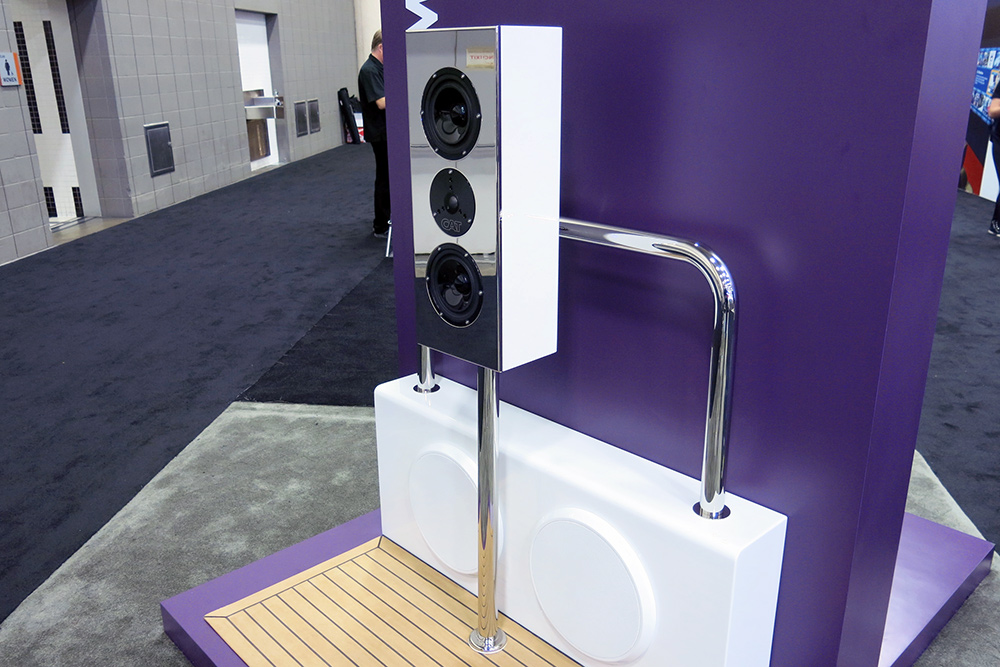 This custom speaker from California Audio Technology, better known as CAT, might be the most niche-market speaker ever made -- it’s built specifically for mega-yachts. The baffle is machined from 316L stainless steel, which the company described as “wristwatch grade.” The aluminum enclosure is coated with Awlgrip, an ultra-tough paint specifically developed for marine use, and the driver diaphragms are clear-coated with Awlgrip. Each of the speakers costs $40,000. The 12” subs seen below the speaker are designed to mount directly into a yacht’s hull, and cost $10,000 each. The system has already been installed on the helicopter pad of one 200-plus-foot yacht, so when the helicopter’s not there, the pad can be used for dance parties. 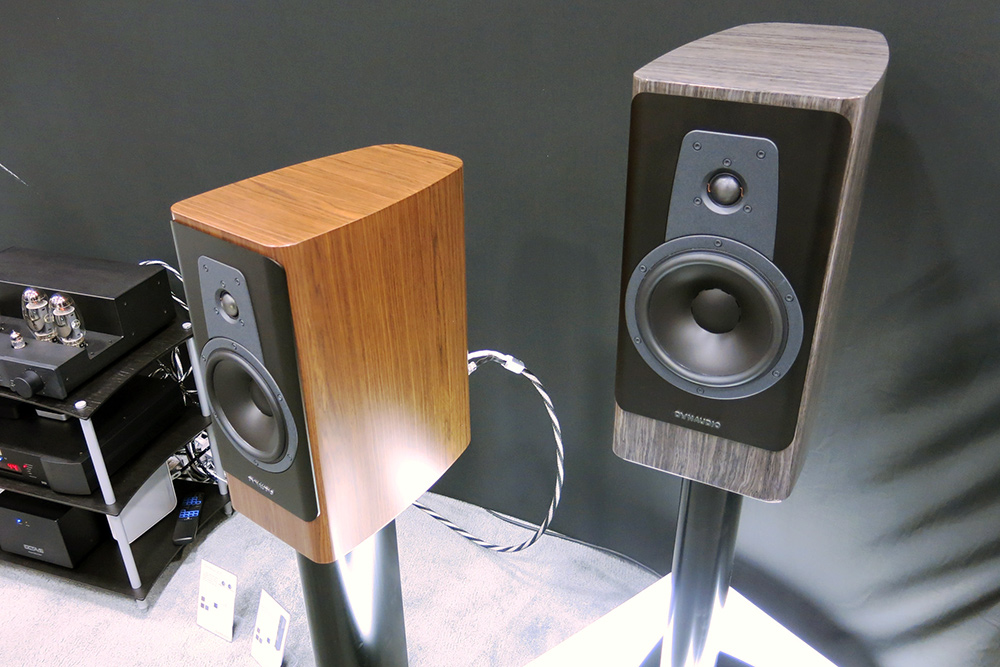 The CEDIA Expo marked the North American debut of Dynaudio’s Contour 20 stand-mounted speaker, which will sell for $5000 per pair in Walnut Satin (left), White Oak Satin, Piano Black, or Piano White finishes, or for $5750 per pair in a finish of Grey Oak (right) or Rosewood. It uses a 7” woofer made with Dynaudio’s variable-thickness MSP membrane, plus the company’s Esotar2 tweeter. 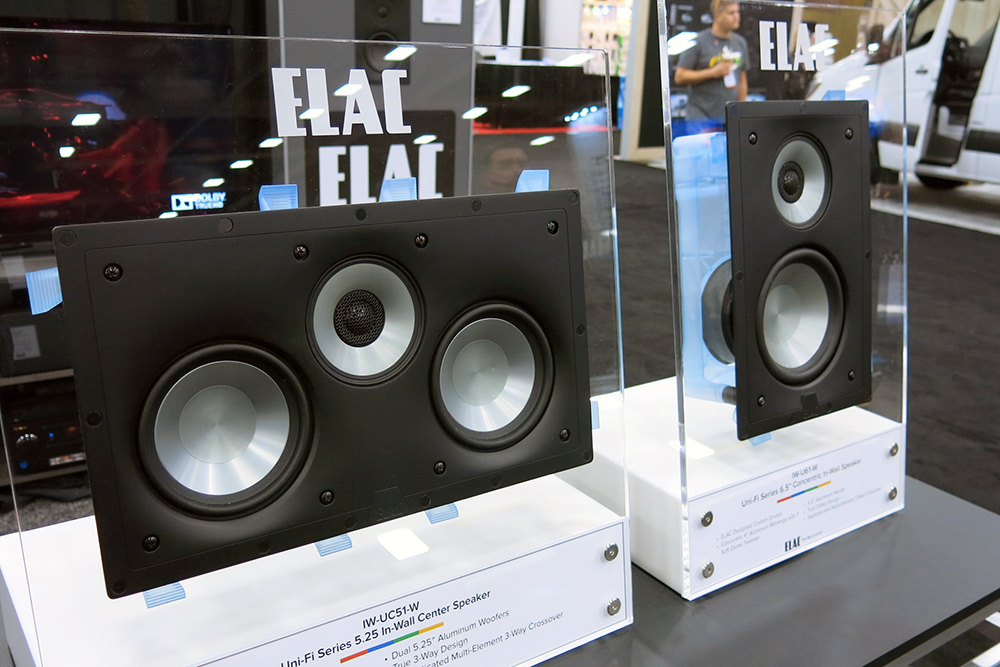 ELAC’s Debut and Uni-Fi speaker lines have earned some of the most enthusiastic reviews of the last few years, and now designer Andrew Jones has created in-wall versions of both lines. The IW-UC51-W at left is an in-wall version of the Uni-Fi UB5. It can be used as a center or left/right speaker, and houses two 5.25” woofers, and a 1” tweeter concentrically mounted inside a 4” midrange. The IW-U61-W at right is basically an in-wall version of the company’s Uni-Fi UB5 bookshelf speaker, but with a 6.5” woofer instead of the UB5’s 5.25-incher. 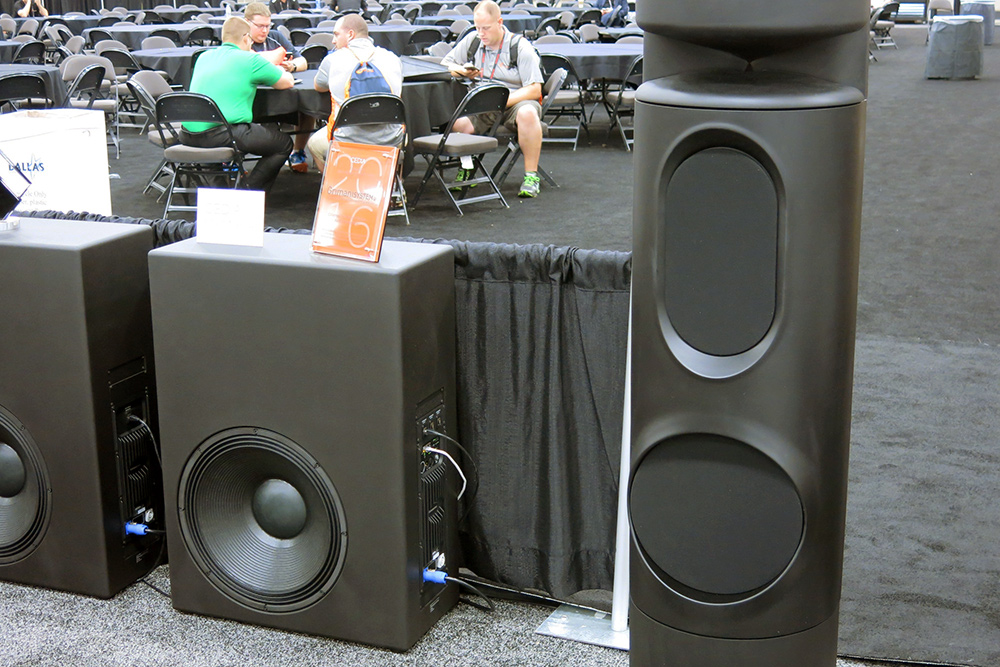 Grimani Systems, a company founded by ex-THX, ex-Dolby theater designer Tony Grimani to build state-of-the-art home speakers, launched its largest speaker yet, the $32,700-each Alpha. It’s a three-way, tri-amped design with a 12” woofer powered by a 1000W amp, two 6.5” midranges powered by a 500W amp, and a 1” compression tweeter powered by a 250W amp. DSP for speaker tuning and room correction is built in. The subwoofer is the Delta, which features an 18” driver powered by a 2000W amp. The Delta runs $20,900 in the master version with built-in DSP, and $17,500 in the slave version with no DSP. 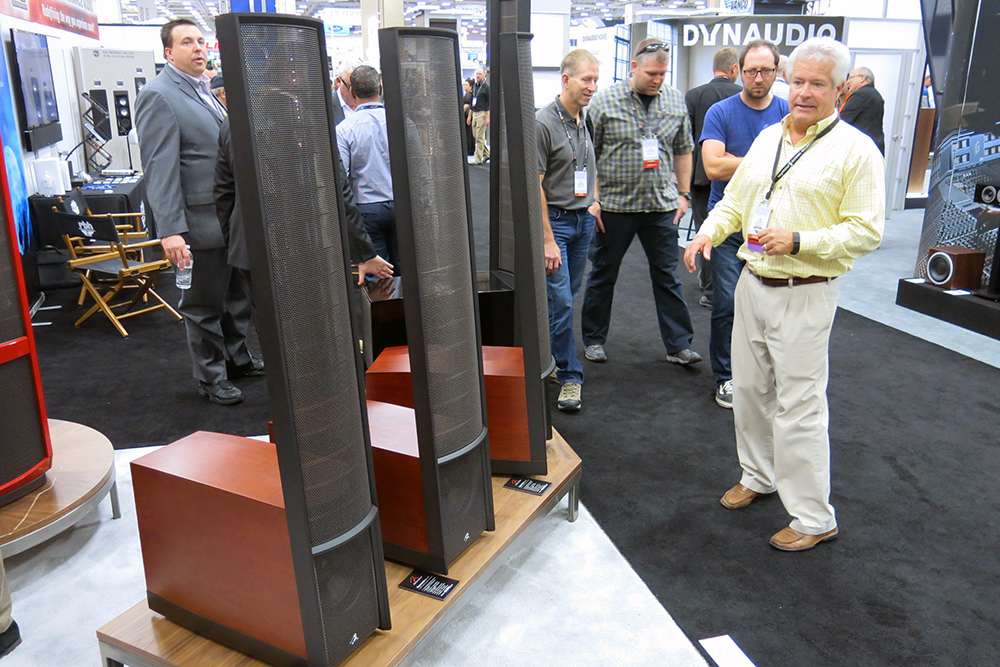 The Classic ESL9 is the latest in MartinLogan’s Masterpiece line of electrostatic speakers. It’s a passive design with front- and rear-firing 8” woofers and a 44” by 9” electrostatic panel, and will sell for $6495 per pair. 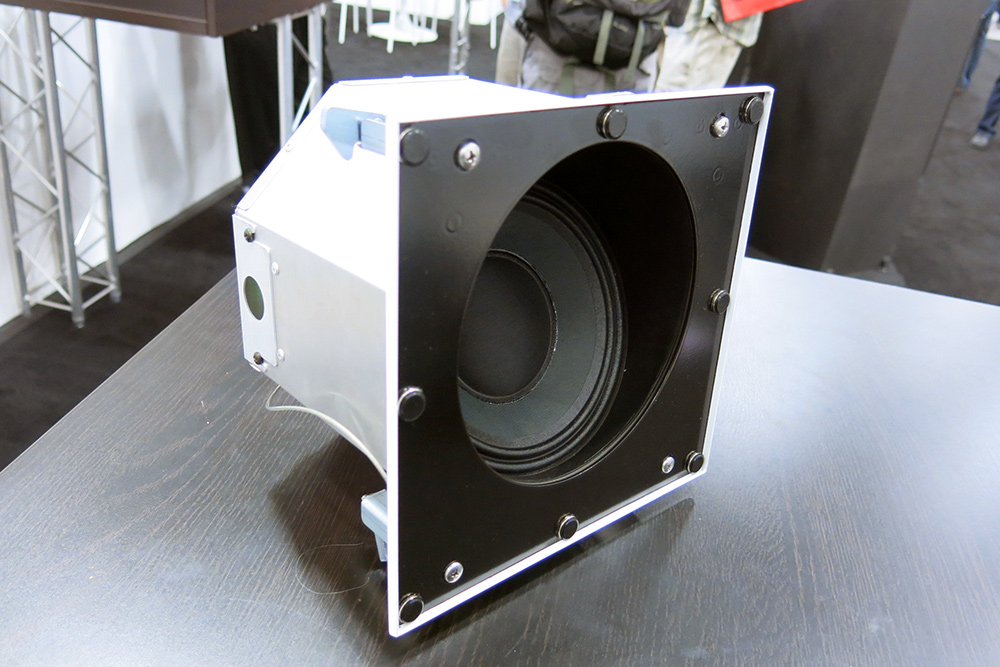 Pro Audio Technology is best known for large, P.A.-style speakers built for custom home theaters, but the SCRS-6C-ica is a completely different product: a very high-quality in-wall/in-ceiling design with a tiny horn tweeter mounted behind the acoustically transparent dust cap of a 6.5” woofer, and a rated sensitivity of 103dB -- all mounted in an aluminum enclosure. It’s available in a standard version and an angled version (shown here) for use in the left, center, and right channels of a home theater. Price is expected to be about $1000 each.