If you read practically any high-end audio publication, you probably know by now that the high-end audio industry has largely abandoned the Las Vegas CES show -- or did the show abandon high-end audio? I’m not sure, but either way, there were only a couple of dozen audio companies at the Venetian hotel, a venue that only three years ago hosted a couple hundred audio companies. But between the exhibits at the Venetian and a smattering of audio companies over at the Las Vegas Convention Center, I did find a few interesting new audio products worth checking out. Here’s the first bunch, with all prices in USD. 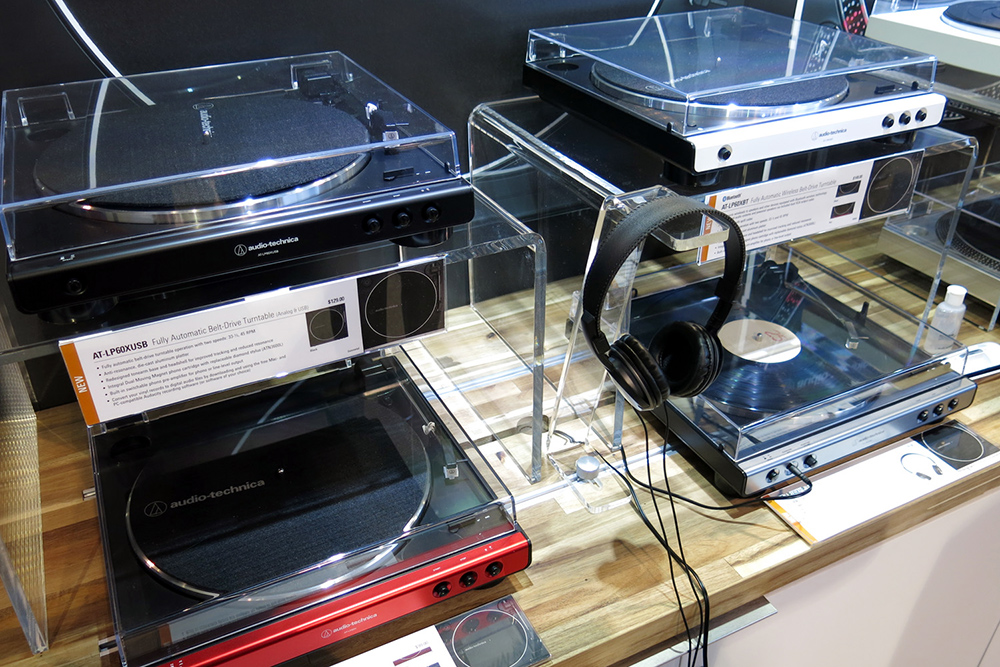 Audio-Technica’s inexpensive turntables are widely regarded as the least-expensive models worth fooling with. For 2019, the company updated and expanded its budget line with new chassis that look nicer and sturdier than the old ones, and a few new features, too. All have built-in phono preamps and RCA output jacks (some older models had hardwired cables). The AT-LP60 ($99, bottom left) is the basic model. The AT-LP60XHP ($129, bottom right) adds a headphone amp with front jack and volume control. The AT-LP60UXB ($129, top left) doesn’t include the headphone amp, but does include a USB output for easy dubbing onto a computer. The AT-LP60XBT ($149, top right) has a built-in aptX Bluetooth transmitter. 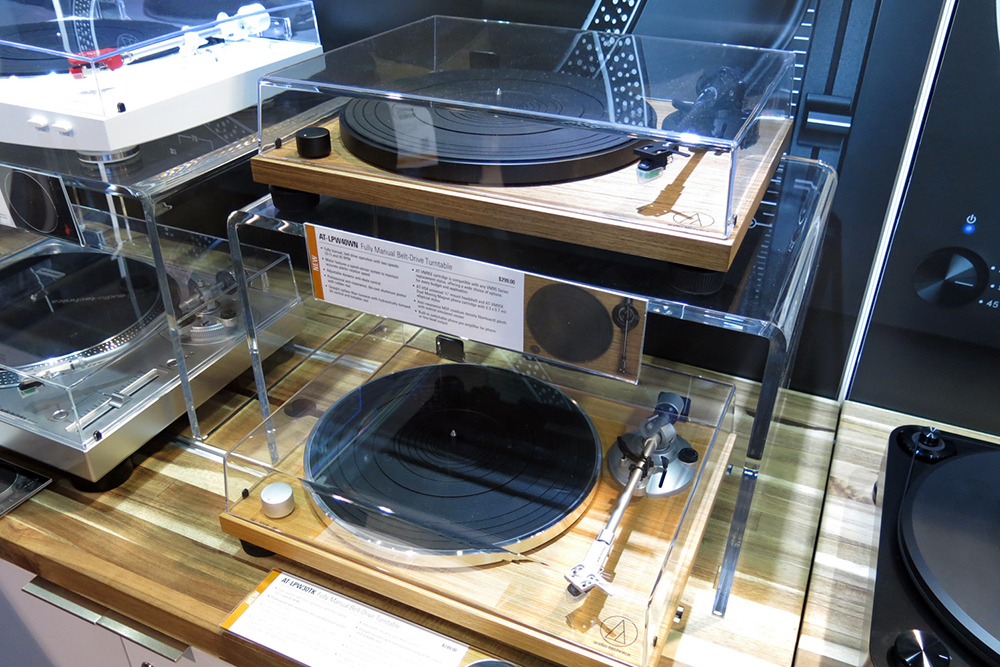 Audio-Technica also launched a new higher-end line designed to compete with high-quality budget tables from Music Hall and Pro-Ject. Both have built-in a phono preamp that can be bypassed, both include an Audio-Technica AT-VM95E MM cartridge, and both use a die-cast aluminum platter and an MDF plinth covered in simulated walnut vinyl. The LP-W30TK ($249, bottom) is the basic model; the step-up LP-W40WN ($299, top) adds a carbon-fiber tonearm and a speed-sensor system to maintain correct RPM. 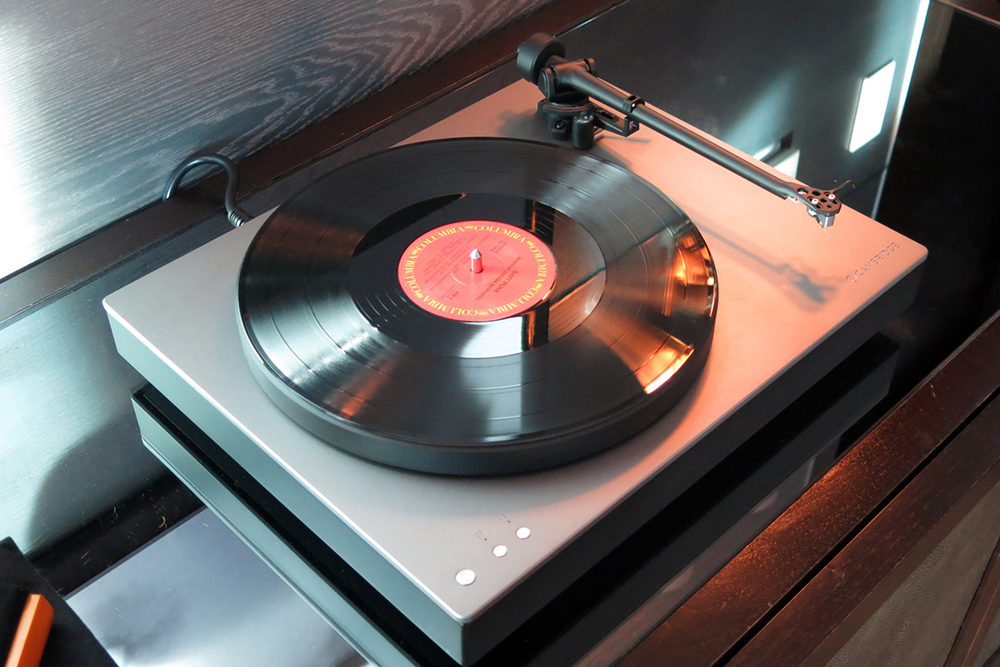 Cambridge Audio’s Alva TT Bluetooth turntable ($1699.99), which debuted in prototype form at last year’s Rocky Mountain Audio Fest, was up and running in its final version at CES. It includes a Bluetooth aptX HD transmitter that’s capable of transmitting data-reduced audio at resolutions up to 24/48. It’s a direct-drive, medium-torque design, which the company says it chose because it offers better speed consistency than belt drive but with smoother operation than high-torque direct-drive turntables. A 6mm aluminum top plate adds mass to the plinth. The Alva TT includes a high-output moving-coil cartridge of Cambridge Audio’s own design, and has line outputs and a built-in phono preamp. 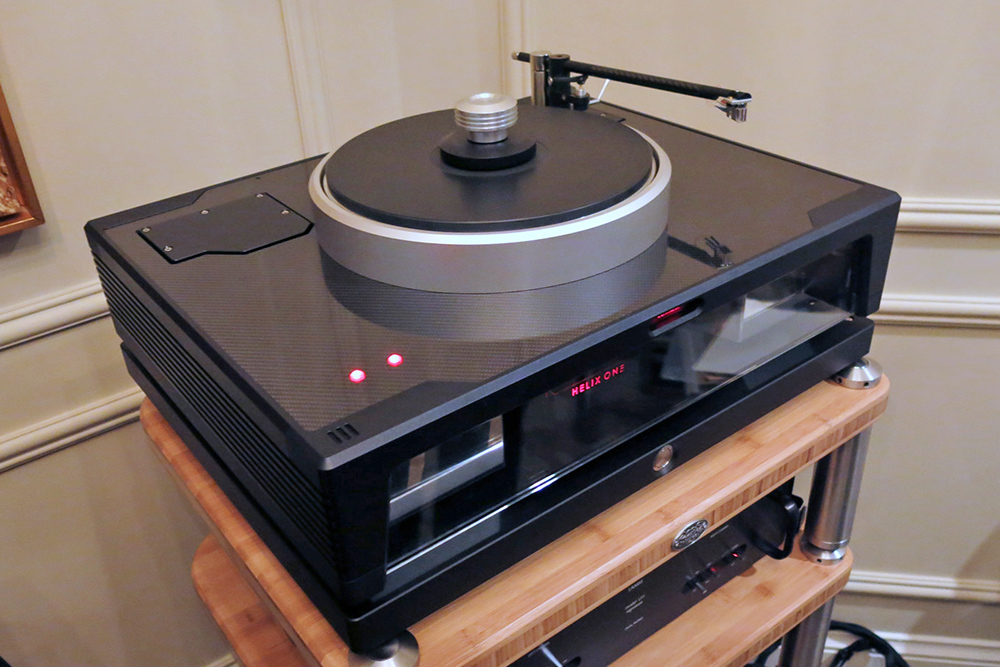 By a zillion miles, the most lust-worthy new turntable at CES 2019 was the Döhmann Audio Helix One-V ($65,000 without tonearm or cartridge). It has the same suspension system as the original Helix One, which debuted in 2015. The main differences between the two are that the One-V has a new low-pressure vacuum hold-down system for the record, and an advanced motor-control system that company founder Mark Döhmann says automatically adjusts to correct the inaccuracies of the dual-belt drive system. “It’s almost like a direct-drive model in terms of authority and pacing, but it doesn’t have the high-frequency artifacts that direct-drive ’tables have,” Döhmann told me. Döhmann demonstrated the efficacy of the active suspension system by playing a record and rocking the base of the turntable around. The top part of the turntable floated on its own without the slightest audible playback glitch. 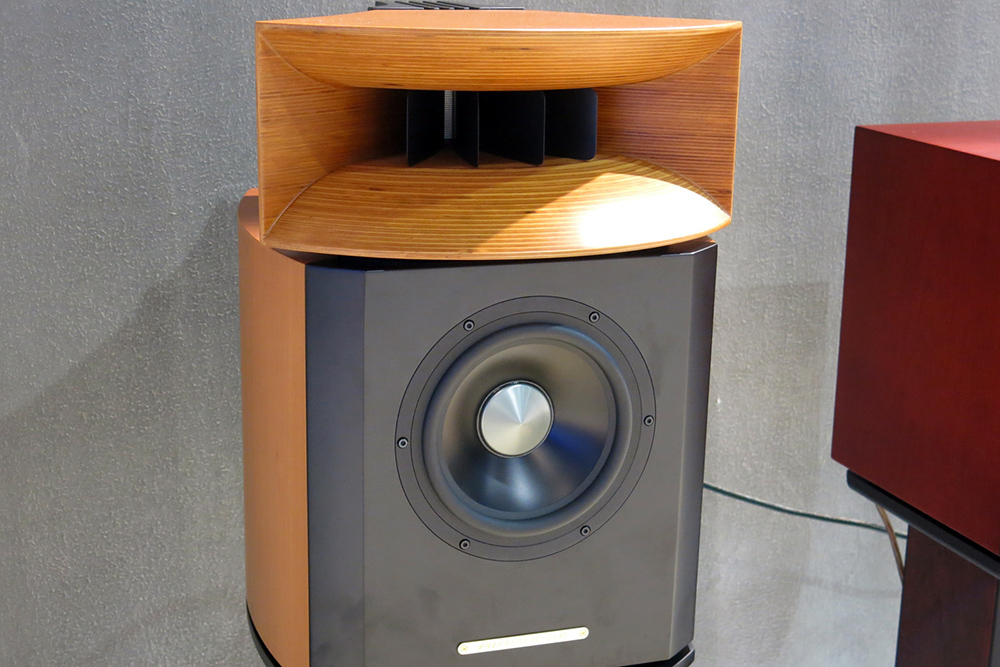 Edifier’s Airpulse A800 combines the sound of the classic segmented tweeter horn, popularized decades ago by Altec-Lansing and JBL, with the convenience of a wireless speaker. Each horn is powered by a ribbon tweeter, and an 8" woofer handles the bass and lower midrange. All amplification and digital-to-analog conversion is built in. Like Edifier’s other high-end active speakers, the Airpulse 800 is voiced by well-known bass amp and speaker designer Phil Jones. It includes aptX Bluetooth and a balanced analog input, as well as coax, TosLink, and USB digital inputs. Price is expected to be around $4000 for a stereo system. 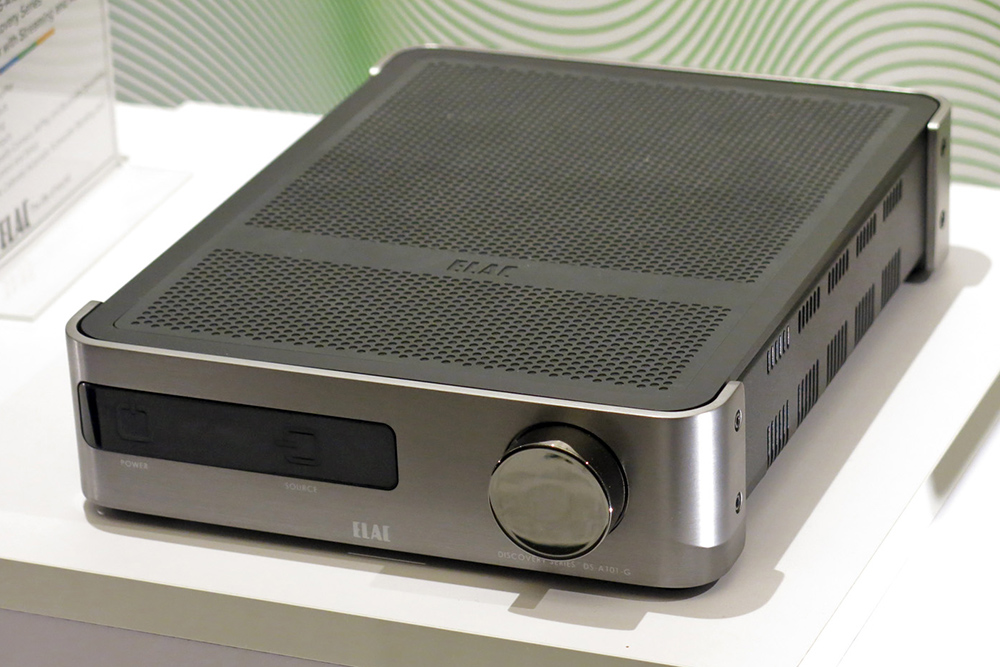 Elac’s Discovery DS-A101-G ($749) might be the most advanced integrated amp you can buy. It works as a Roon endpoint and includes Bluetooth, AirPlay, Spotify Connect, and DLNA. The subwoofer output includes an automatic blending feature that optimizes the blend of the subwoofer and the main speakers for you. The built-in stereo BASH amplifier is rated at 80Wpc. Because the DS-A101-G incorporates Dolby Digital and can learn codes from other remotes, it can deliver all the convenience of a soundbar when used as a TV sound system with a couple of speakers. 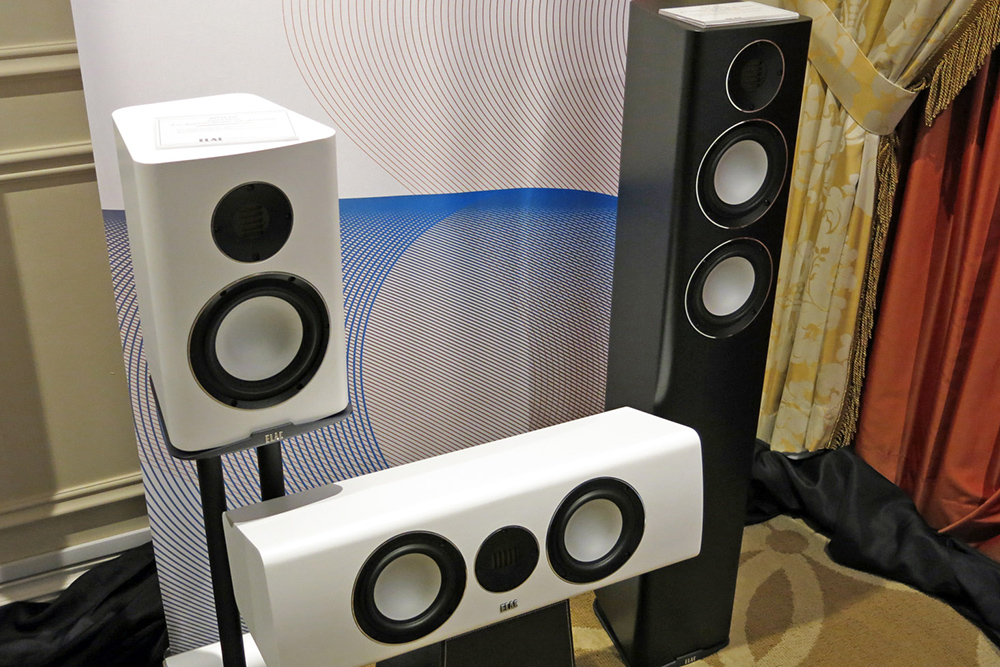 Elac’s new Andrew Jones-designed Carina line of speakers incorporates an air-motion transformer (AMT) folded-ribbon tweeter in each model instead of the conventional dome tweeters used on Jones’s other Elac models; Elac calls it a Jet tweeter. The BS244.2 bookshelf model ($1200 per pair) has a 6.5" woofer plus a Jet tweeter, while the FS247.4 tower speaker ($2400 per pair) has the same tweeter with two 5.25" woofers. The CC241.4 center speaker (price TBD) has the same driver complement as the tower speaker. Because the Jet tweeter’s low-frequency response isn’t as deep as the dome tweeters Jones has been using . . . 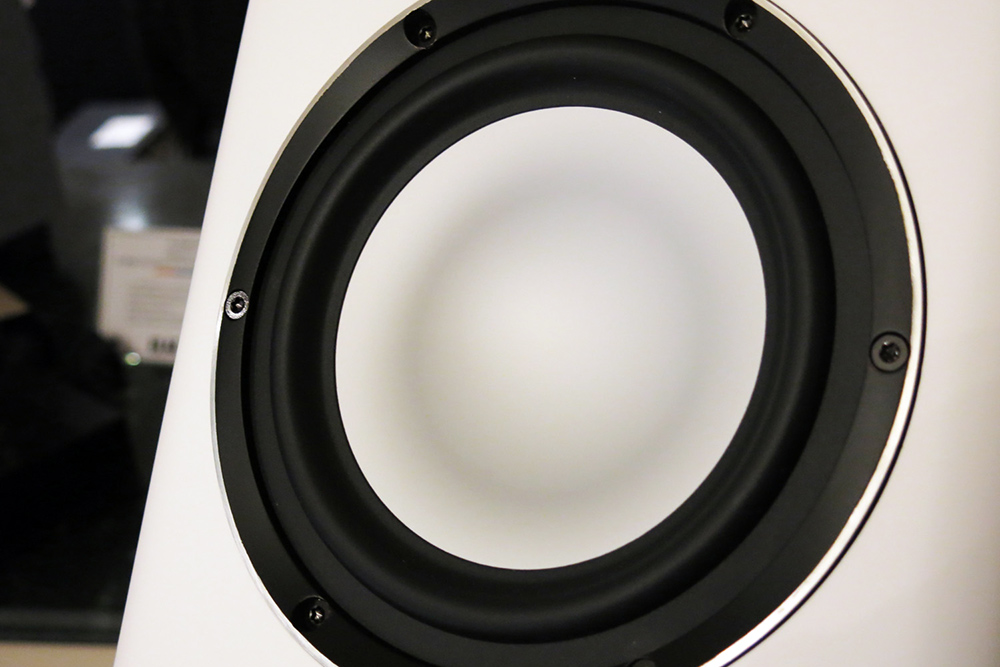 . . . he used a compound curvature on the aluminum woofer cone to extend its high-frequency response so it would blend better with the tweeter. The curve gets shallower as it nears the outer edge of the cone.