Against all odds, the 2022 CES took place this week in Las Vegas, even though many major tech manufacturers had pulled out and most press outlets canceled their plans to attend. So why did I go? Partly out of sheer inertia—I haven’t missed a CES since I first visited the show in 1990. Partly out of convenience—I was driving back to Los Angeles after visiting my family in Texas, and Las Vegas wasn’t far out of the way. And partly out of curiosity—I can remember when CES didn’t take over all of Las Vegas, when you could get a good lunch buffet at the Sahara for $6, and when the press events actually focused on new products rather than creating spectacle for the TV cameras. I hoped that the 2022 show would recall those simpler times of my youth. Rosebud . . .

Some might question the wisdom of attending, given the recent surge in the COVID-19 Omicron variant. But all show attendees had to show proof of vaccination, and in my two days in Las Vegas, visiting the convention center plus five different hotels, I recall seeing exactly one person without a mask (except of course in restaurants). Compare that to my stop at a Buc-ees on Interstate 10 west of Houston, where of the roughly 200 customers I saw in the store, I was the only one wearing a mask—and this in a state that ranks 29th in vaccination rate. And considering the sparse attendance, I felt like CES was one of the safest places I could be. 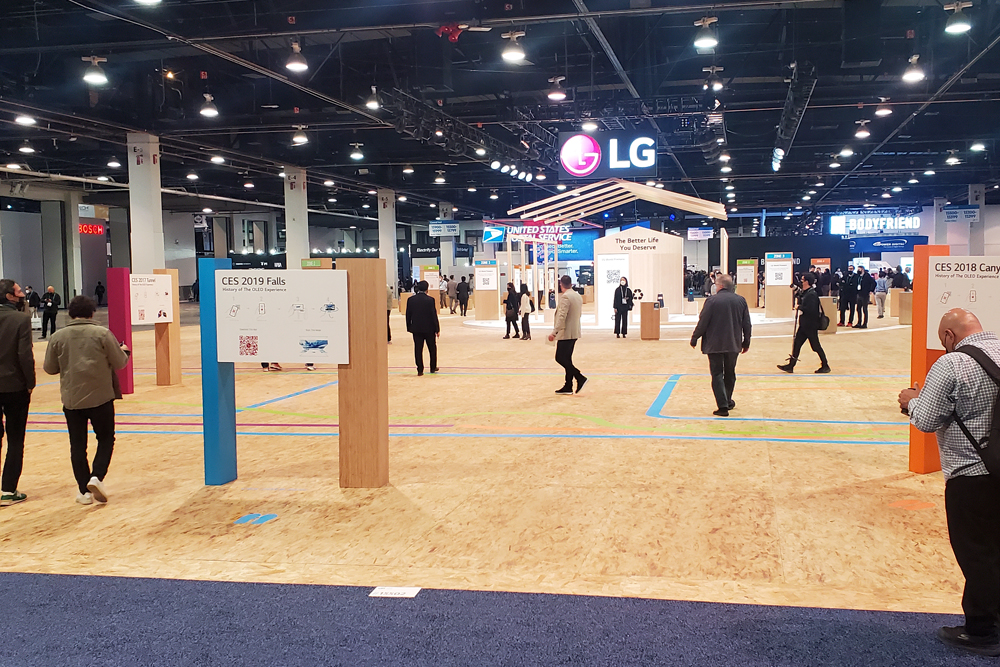 All that said, CES proved to be an almost complete waste of time for an audio journalist. I could count the major audio companies that attended on one hand—and have fingers left over. Of the tech giants, only Samsung actually demoed new products. Others, such as Sony, Panasonic, and LG, had very stripped-down booths with no real product displays—or in LG’s case, hastily constructed wooden frames with QR codes that you could scan with a smartphone to see images of the company’s past exhibits.

However, I did find a few new audio products at the show. Here’s the first batch, with all prices below in USD. I’ll cover new speakers in a second blog post. 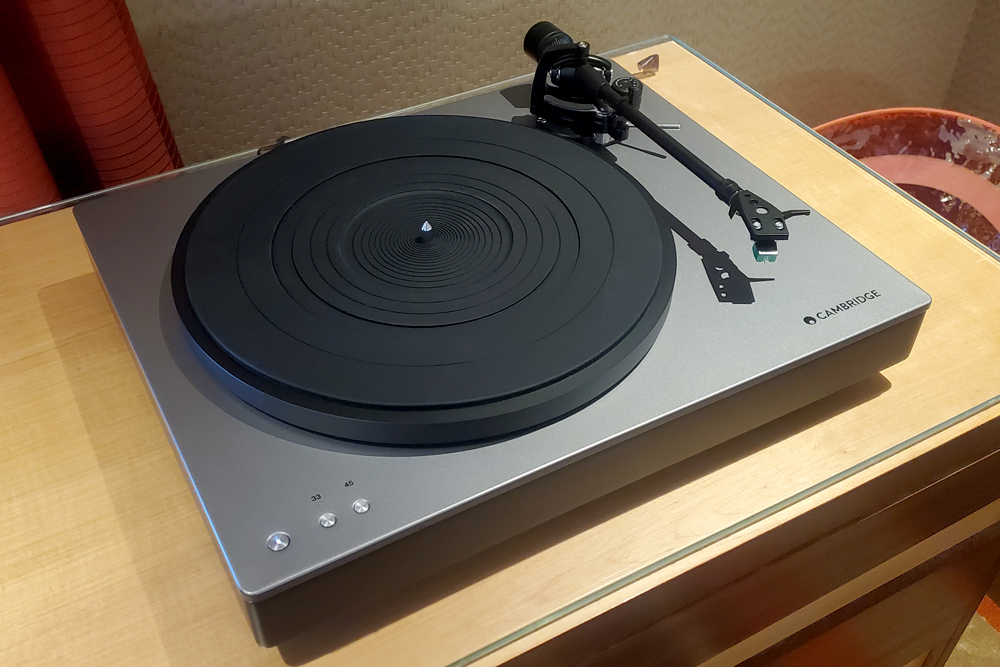 In a private suite at the Bellagio, Cambridge Audio launched two new turntables: the direct-drive Alva TT V2 ($1999) and the belt-drive Alva ST ($999). The Alva ST is shown here, but the two turntables are visually indistinguishable unless you look closely at the cartridge—the ST has an Audio-Technica AT-VM95E moving-magnet cartridge, and the Alva TT V2 has Cambridge Audio’s custom Alva MC moving-coil cartridge. Both turntables feature an aptX HD Bluetooth transmitter, along with a built-in phono preamp that can be bypassed; in the original model, the Alva TT, the phono pre was always in the circuit. The new models also feature an updated tonearm. 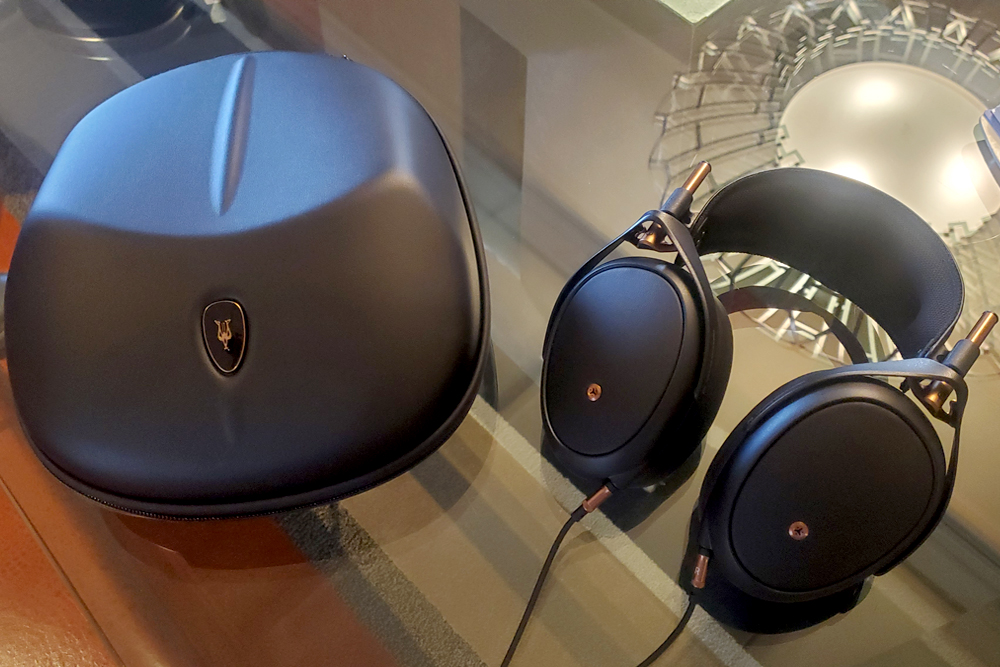 The Meze Liric headphones ($2000) are a cost-reduced version of the Empyrean headphones, which I raved about when they debuted in 2019. They feature a scaled-down version of the Rinaro Isodynamics planar-magnetic driver found in the Empyreans. The band is simpler but still effective and comfortable, and from a practical standpoint, the case is actually nicer—rather than the metal briefcase that houses the Empyreans, Meze includes a relatively compact, form-fitting molded case that’s much easier to slip into a duffel bag or suitcase. 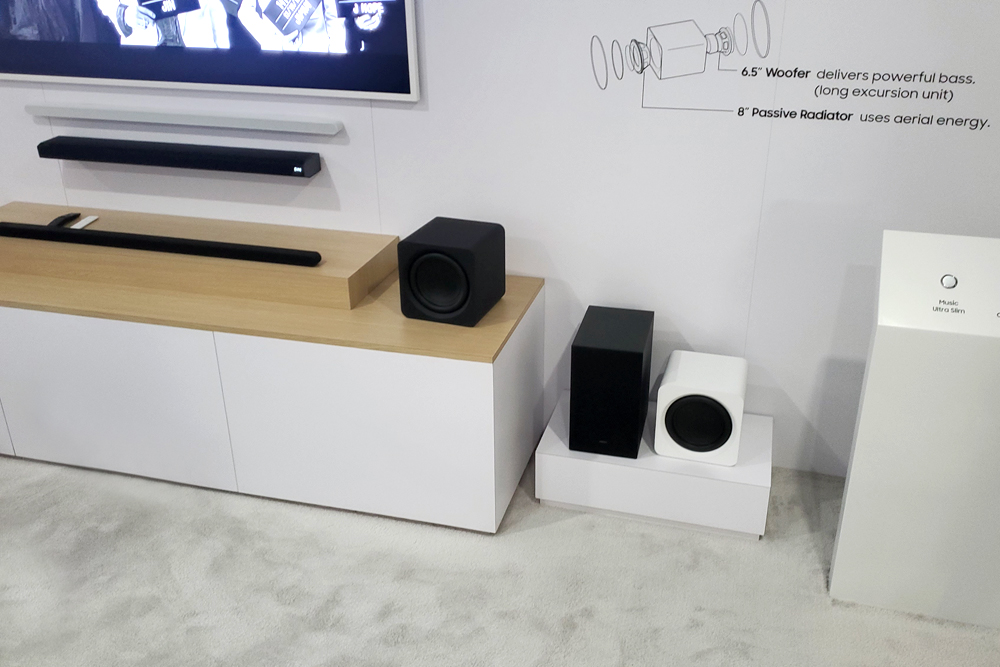 I’d say that, by far, the most revolutionary audio product at the show came from Samsung, which showed its new HW-S800B Ultra Slim Soundbar (price TBD). The HW-S800B measures only 1.4″ high and 1.6″ deep, but it incorporates two-way speakers for left, center, and right channels, plus upward-firing drivers for Dolby Atmos and DTS:X immersive sound. A tiny subwoofer, packing a 6.5″ woofer and an 8″ passive radiator, handles the bottom end. Even though I didn’t initially notice the white soundbar mounted under the TV (Samsung mounted one of its existing models below, in black, for comparison), it easily filled the demo room in Samsung’s booth with powerful, enveloping surround sound. The HW-S800B is one of what will be a line of Ultra Slim models, which will vary mainly in length and price. 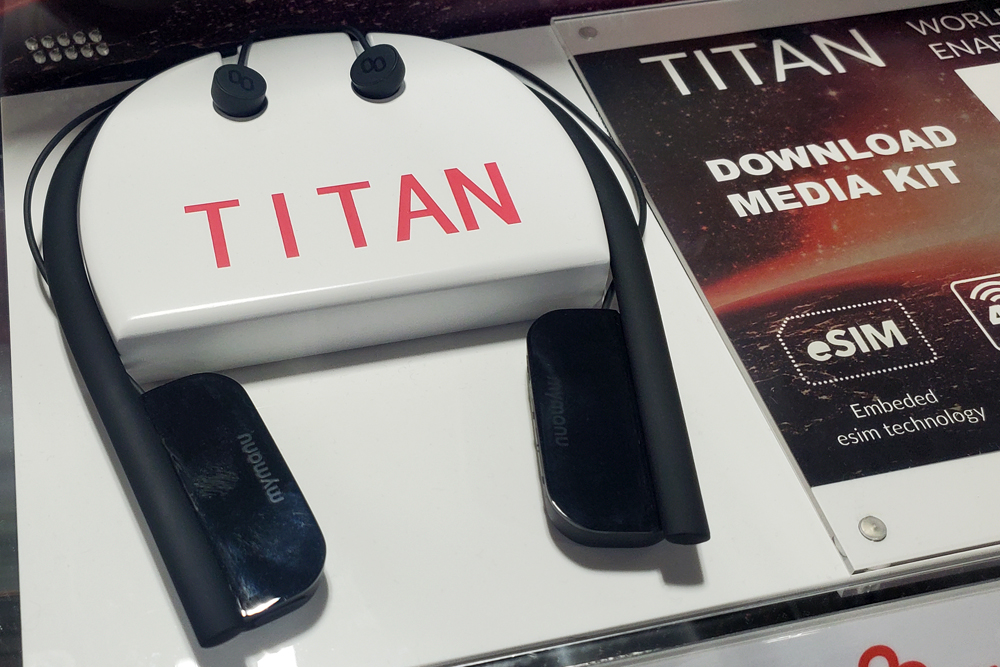 UK-based tech company Mymanu claims its new Titans are the first 4G-enabled earphones, meaning you don’t need a smartphone to play stored music or streamed files from the internet through a cellular network. (I do remember writing a few years ago about a rather clumsy-looking attempt to incorporate an Android phone into a pair of headphones, but I don’t think they ever shipped.) The Titans ($166) were co-developed with Bosch Telecom, and they work entirely through voice control—you tell them what you want to stream and from where, how to set the volume, etc. They also include a built-in translator that works through the MyJuno app to translate 37 languages on the fly. A neckband contains all the electronics, and the earphones are connected with short cables.