There were a few new products at FAE 2020, and some that weren’t brand new but that were playing at a show for the first time. Trends? Integration is still a thing. We saw lots of products that combine functions that are typically handled by standalone components in separates-based systems. What has always occurred to me is that some functions should be combined -- for convenience, yes, but perhaps also for performance. As a prime example . . . 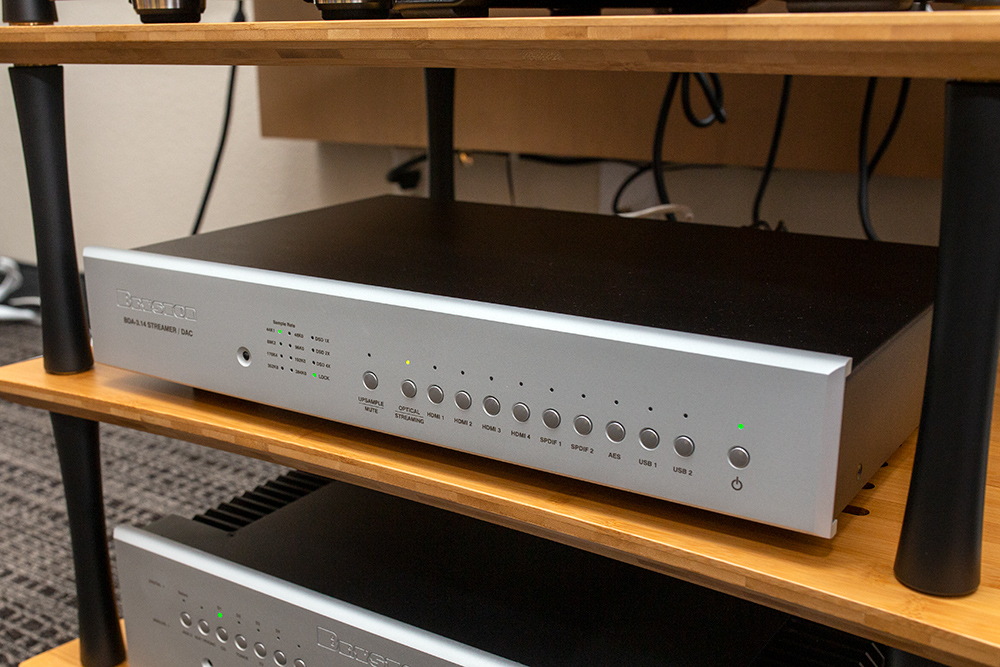 Bryston played the BDA-3.14 streamer-DAC ($4195, all prices in US dollars) at FAE 2020, which includes a DAC based on the company’s flagship BDA-3 digital-to-analog converter, plus a slew of additional features. The BDA-3.14 comes with USB, HDMI, S/PDIF, and AES/EBU inputs, and an internal music player that supports Tidal, Qobuz, and Roon. The onboard digital volume control allows direct connection to an amplifier, so no traditional analog preamplifier is needed if you’re running an entirely digital system -- just connect single-ended or balanced interconnects from the BDA-3.14 to a power amp. The USB input supports resolutions up to 32-bit/384kHz PCM and DSD512. The other inputs support up to 24-bit/192kHz PCM and DSD128. All in all, we loved the integrated nature of the BDA-3.14 -- add a Bryston amplifier and you’re set. 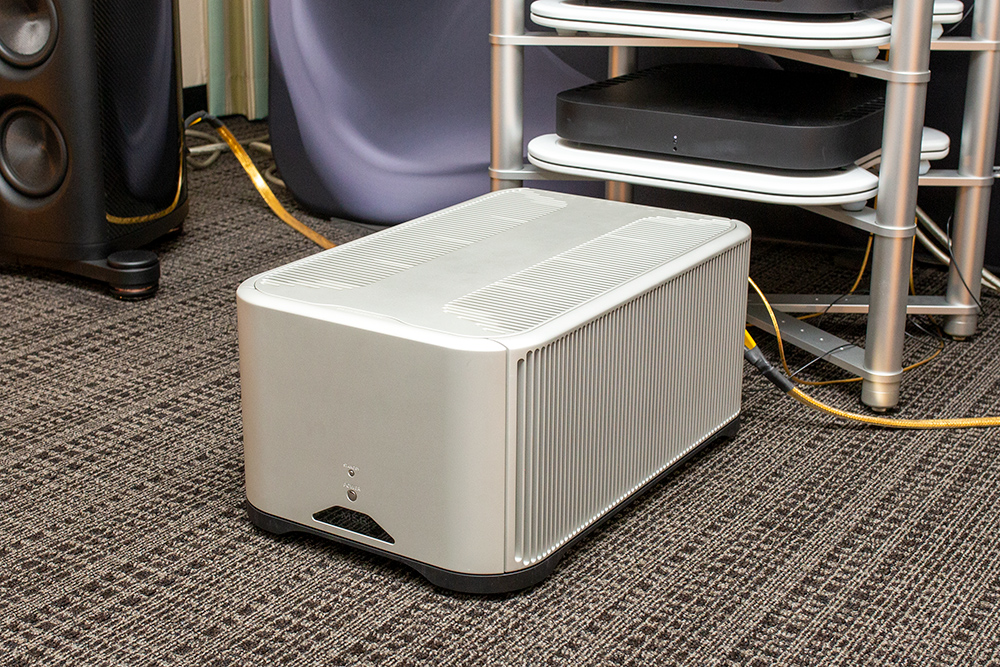 The MSB Technology S500 stereo amplifier ($58,500) was playing for the first time at a show at FAE 2020. This model was codeveloped with the M500 monoblocks, which we saw in Munich at High End last May. The S500 delivers 500Wpc into 8 ohms -- just like the M500 monos -- and has zero negative feedback in the circuit design. According to the company, the million microfarads of power-supply capacitance enable the S500 to control woofers to a profound degree. But it’s not just about control. The S500 is also specified to have 138dB of dynamic range, which is exceptionally high. The input stage is newly developed by MSB Technology and is said to help the S500 match the low noise floors of its DACs. And the machining of the chassis is simply beautiful. 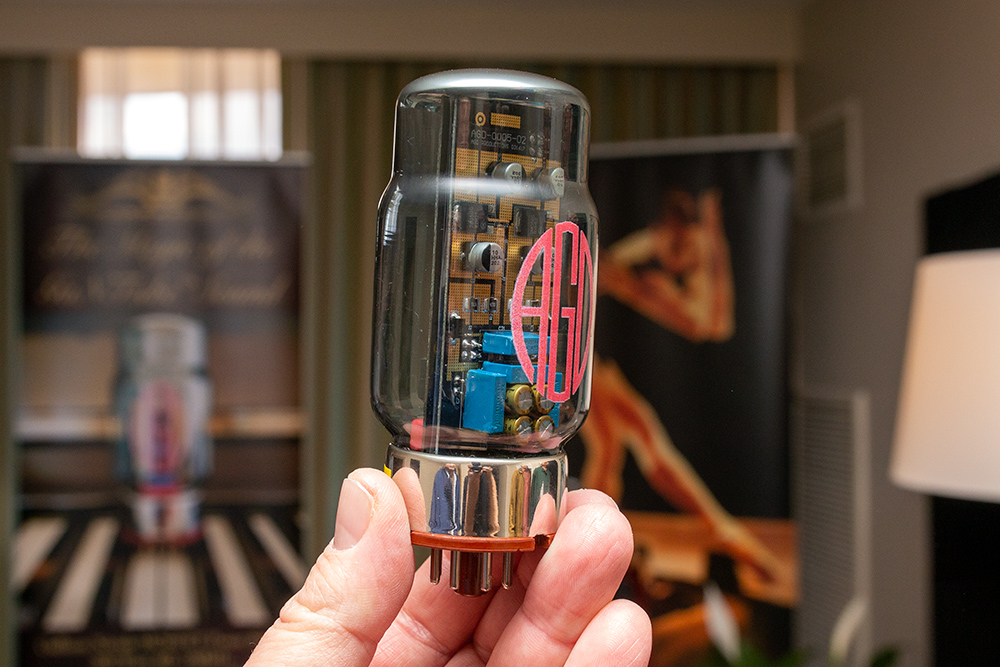 Here’s something you don’t see every day -- a solid-state, class-D output-stage circuit board based on gallium nitride (GaN) transistors nestled into a vacuum tube. Albert Guerra (shown below), president and CEO of AGD Productions, calls it a GaNTube, and it’s more than a gimmick. He first implemented the GaNTube in his top-of-the-line Vivace monoblock amplifier ($15,000/pair). Now he’s implemented it in a smaller monoblock amplifier dubbed The Audion, priced at $7500/pair in a chromed finish and $6800/pair in a satin finish. 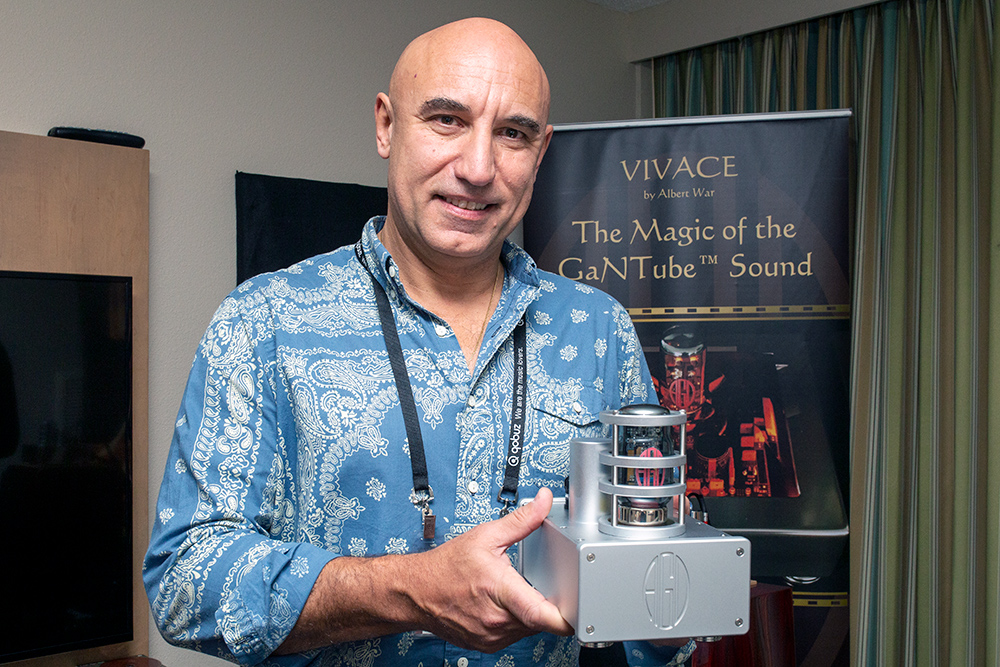 As with the Vivace, the GaNTube plugs into the chassis of The Audion, just like a regular vacuum tube would. That chassis contains the power supply circuitry. The continuous power rating for The Audion is 85W into 8 ohms, while maximum dynamic power is 170W into 4 ohms. A side benefit of this tube-based approach, beyond just looking cool, is that if Guerra updates the GaNTube to improve performance, the consumer can just swap out the tube to reap the benefits, as someone would with a real vacuum tube. Clever. A nice touch he’s included is . . . 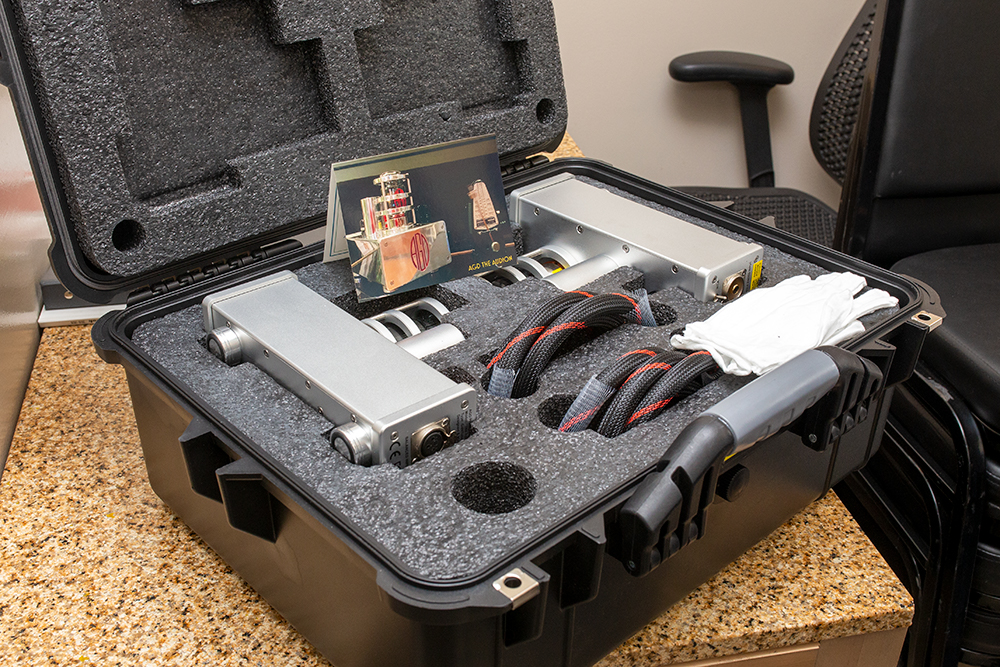 . . . the flight case that the monoblocks come in, to which he’s added high-quality power cords and white gloves. 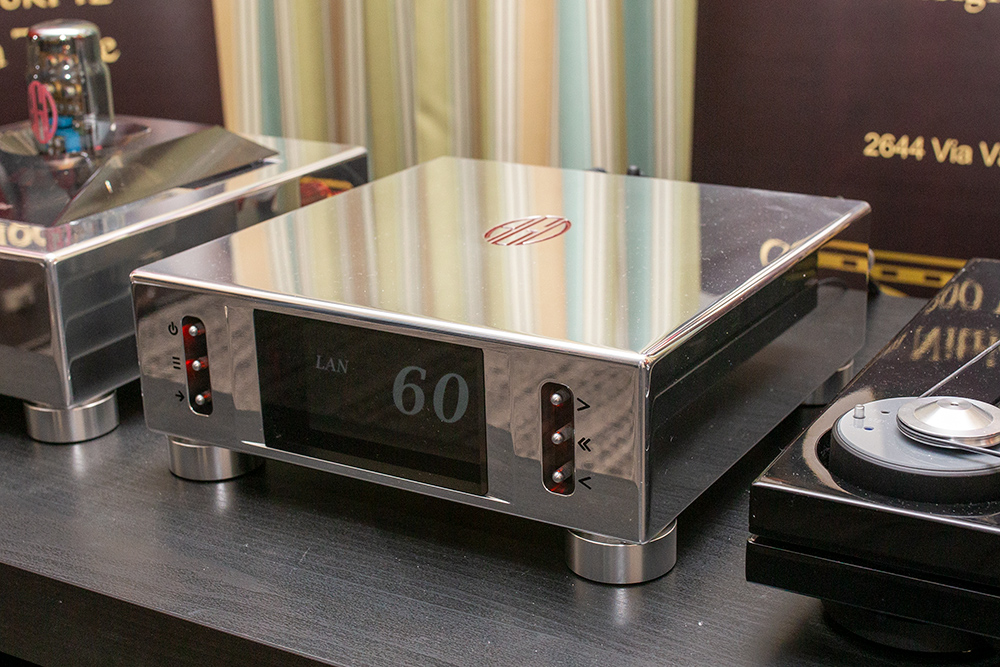 AGD also showed the streaming-capable Andante preamplifier-DAC, which costs $11,000 with a moving-magnet/moving-coil phono stage, and $9800 without it. The Andante, which has balanced analog circuitry throughout and a 256-step resistor-based volume control, has three sets of single-ended (RCA) inputs, one set of balanced (XLR) inputs, one set of balanced (XLR) outputs, and two sets of single-ended (RCA) outputs (if the phono option is purchased, one set of single-ended inputs gets configured as that). Digital inputs include Ethernet, USB, coaxial S/PDIF (RCA), optical S/PDIF (TosLink), AES/EBU (XLR), and Bluetooth aptX HD. The streamer/digital section is said to be compatible with UPnP/DLNA, Roon, and Tidal. Like the AGD amplifiers, the Andante is designed and manufactured in the USA. 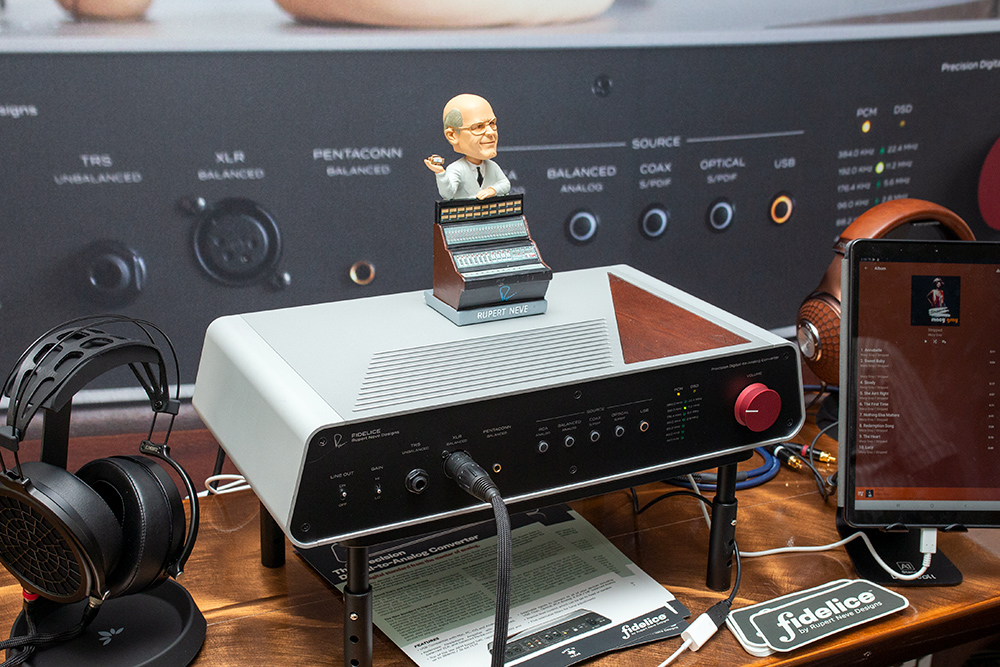 The Fidelice by Rupert Neve Designs Precision digital-to-analog converter, which is priced at $4995, is quite a bit more than only that -- it has a capable headphone amplifier that has not only a 1/4" connector but also XLR and Pentaconn balanced connectors. The Precision also has an Alps potentiometer for volume control, as well as single-ended (RCA) and balanced (XLR/TRS) input and output connectors so that it can be used as a preamplifier. An AKM 4497 chipset forms the heart of the digital-to-analog converter section. Digital inputs include coaxial S/PDIF (RCA) and optical S/PDIF (TosLink), which support PCM up to 24-bit/192kHz, as well as USB, which supports maximum resolutions of 32-bit/384kHz PCM and DSD512. On the backside of the Precision are five dip switches to select between five digital filter settings. According to a rep, hallmarks of Rupert Neve products include class-A operation for low distortion, high voltage for increased headroom, wide bandwidth, and, last but not least, a combination of intensive measuring and listening during the development process. “We’re both scientists and audiophiles -- we design stuff and then we listen to it endlessly,” he said. Once again, this product is made in the USA. 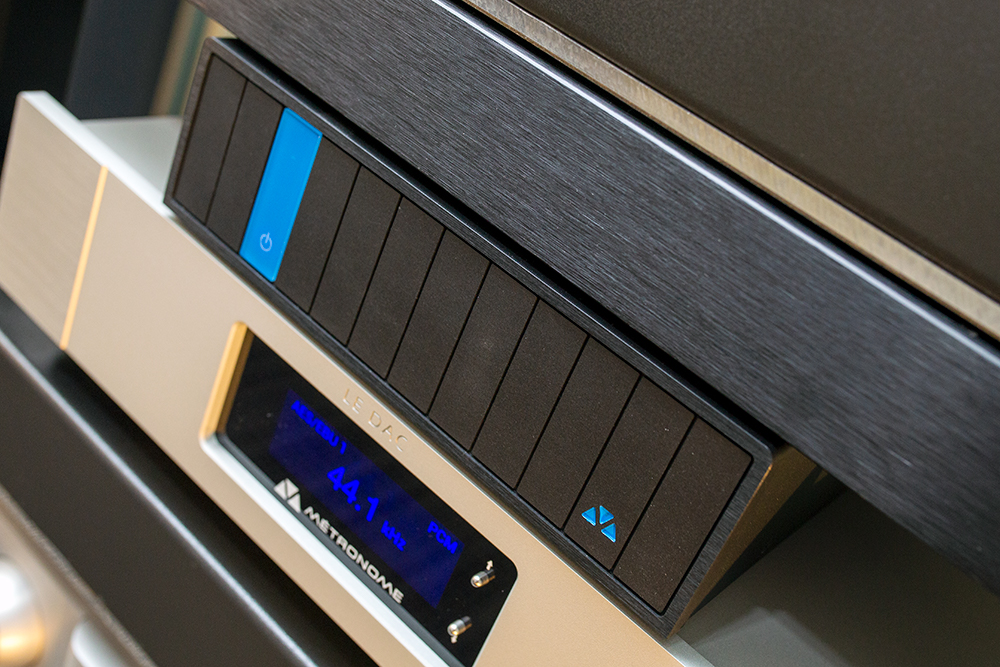 Metronome, which is based in France, showed the DSS (Digital Sharing Streamer), a music streamer (top, in black) with HDMI, coaxial and optical S/PDIF (RCA and TosLink), and AES/EBU (XLR) digital outputs. Digital inputs include two USB jacks and Ethernet. Supported music services include Tidal, Qobuz, Spotify Premium, vTuner, and Deezer. The DSS is compatible with MQA and has onboard Roon and AirPlay. The DSS is available in either black or silver. The price is $4300, and it’s available now.