On a beautiful, blue-sky November morning, SoundStage! Global descended on Windsor, England, for the Hi-Fi Show Live 2018, held November 10 to 11. As is often the case in England, the weather turned into a wet weekend within minutes of taking the photo of the grand De Vere Beaumont Estate. The venue sits in the shadows of a large castle just up the road. That being, of course, the residence of the Queen, built in the 11th century after the invasion of William the Conqueror. 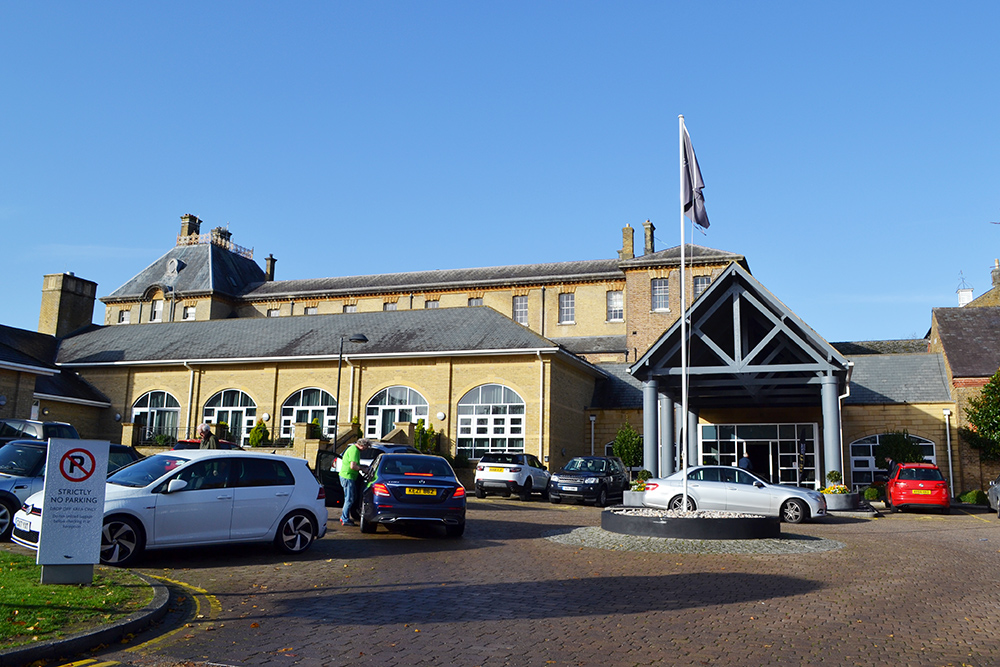 There is some deep history in this part of the world, and that also goes for Hi-Fi Show Live itself. This incarnation is the direct descendant of the Hi-Fi News show (Penta), once the largest international hi-fi show in Europe. The show exhibit space was tricky to navigate, but once I got my bearings within the old building, there were more than a hundred brands waiting to be discovered. Because many of the products shown had debuted elsewhere, we decided ahead of time that I would omit prices for each product. Instead, you’ll find below a summary of the systems I found most interesting, including how they sounded and most of the model names of the individual products in each. 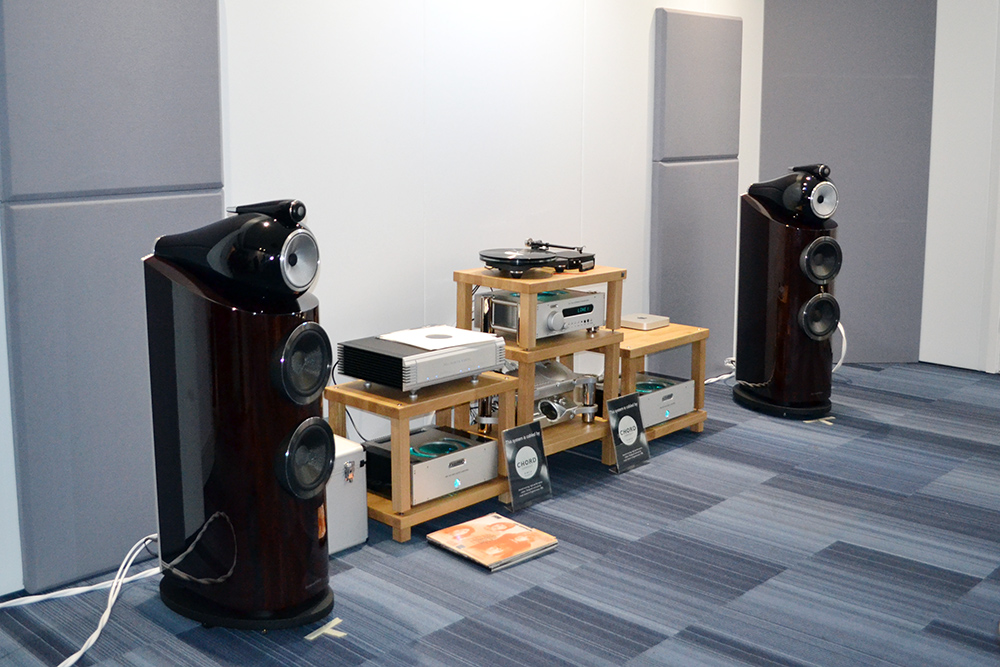 Bowers and Wilkins showed a pair of 802 D3 loudspeakers, powered by a pair of Chord Electronics SPM 1400 MkII mono power amplifiers and a CPA 5000 preamp. The digital source came from a Chord DAVE reference DAC and Blu MkII CD transport. Analog source came courtesy of a Musical Fidelity Nu-Vista Vinyl phono stage and Rega RP8 turntable. Sound appeared to be detailed, perhaps veering toward the analytical end of the spectrum, with digital source at least. 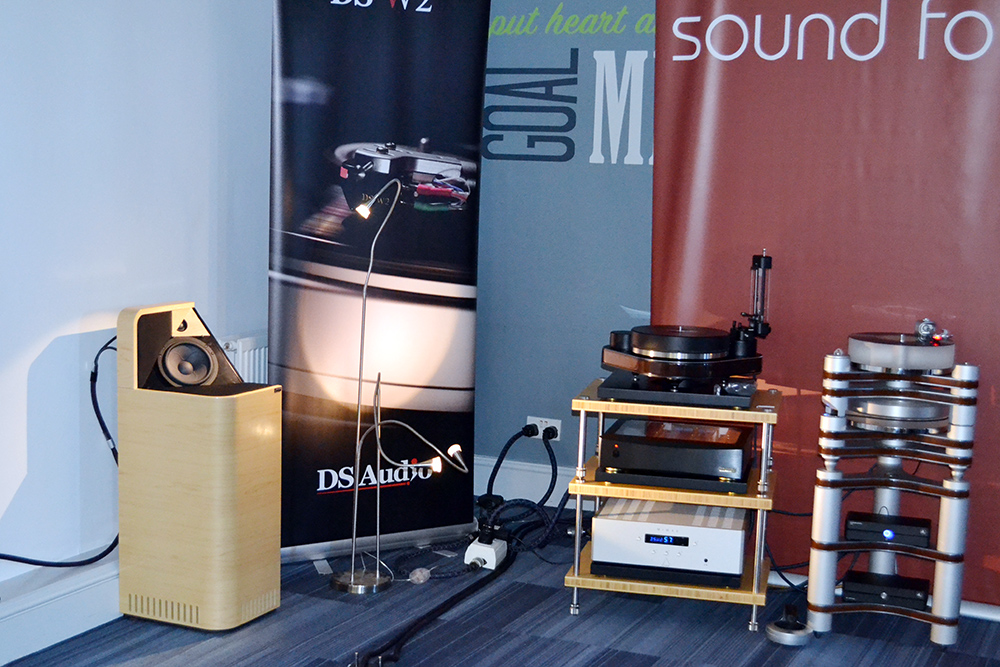 Sound Foundations (distributer) had a combination of Clearaudio turntables, DS Audio amplification, IsoTek mains cleaners, Furutech cabling, and the curious Larsen loudspeakers. The system projected a large image and appeared to dig deep in the bass. I wasn’t convinced the positioning in the room was optimized for the speakers, though they were clearly designed to work close to a boundary. I’d like to hear them in a known environment to get a better picture of their capability. 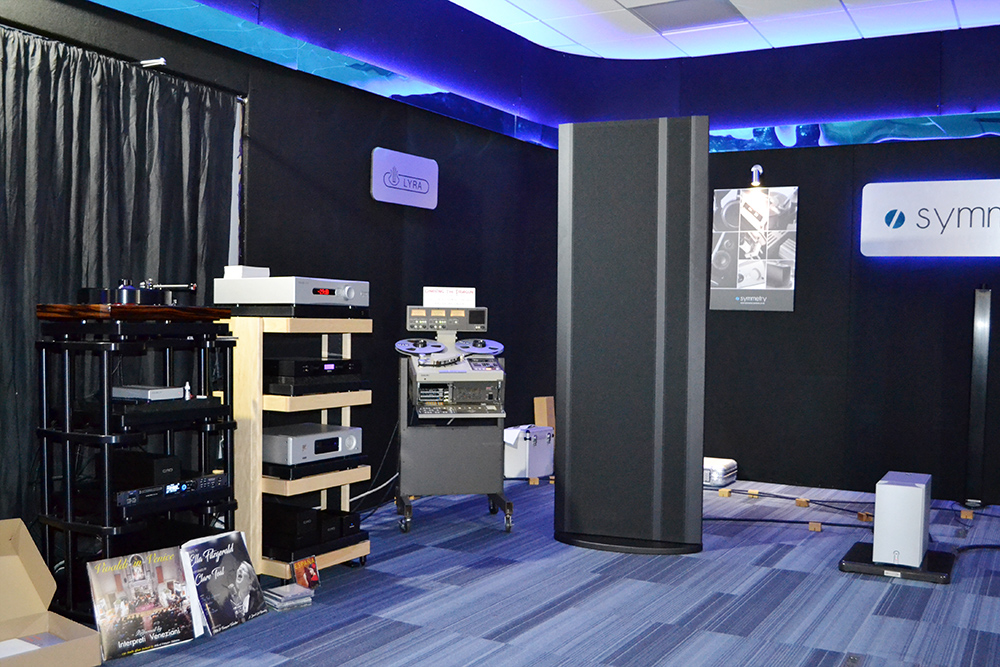 Symmetry Distribution showed a system comprising Magnepan 20.7 loudspeakers driven by Trilogy 995R hybrid monoblock amps and the 903 preamp. Digital source came courtesy of an Ayre Acoustics C-5xe used as a transport only and a Brinkmann Nyquist DAC. Analog source used a Trilogy 907 phono stage connected to a Brinkmann turntable. No show seems complete without a cool piece of vintage gear making an appearance and, yes, this was in the shape of a Sony 1/2" studio reel-to-reel deck playing a live recording by Chasing the Dragon.

Having a slightly biased view on well set-up panel-based systems, I wasn’t let down. The image was big and precise, with the full-range panels delivering a surprising amount of bass -- and not that gut-wrenching bass you might expect from a speaker of this size. 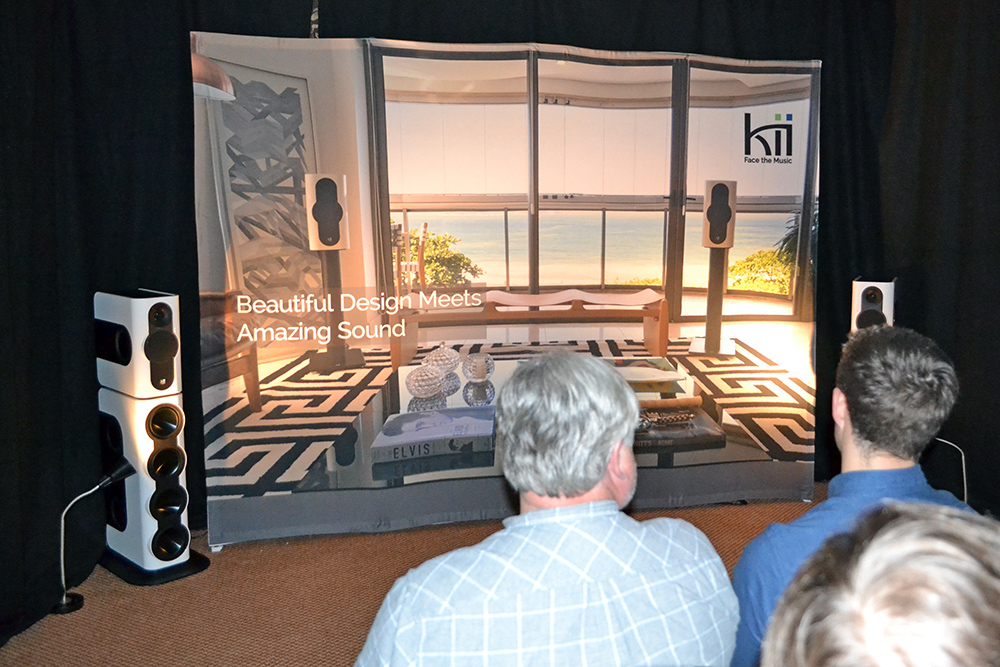 Moving on to something a bit more tech oriented, I came across the Kii Audio room. I’ve been aware of this relatively new German company for a while, but I’d never heard its speakers. Kii was demonstrating its model Three BXT, which is a combination of the Kii Three (standmount) and a new bass section (BXT). All Kii speakers are active and feature some interesting DSP processing techniques, which are said to ensure the speaker can be tuned to the room. The sound was dynamic and powerful with a good image presented. Moving around, I found the sweet spot less rigid, with stereo separation stable a meter or so from the central spot. Considering the demo room was probably too small for the speaker, the DSP room adaptability appeared to be doing its job quite well.

Icon Audio is a small company dedicated to designing and producing all its own tube amps and speakers. I liked the warming appearance (on a cold, wet November day) and silky tone of its MB81 mono amps, using the lovely GU-81 pentode tube. There’s something mesmerising about a tube still glowing in an age of digital technology. 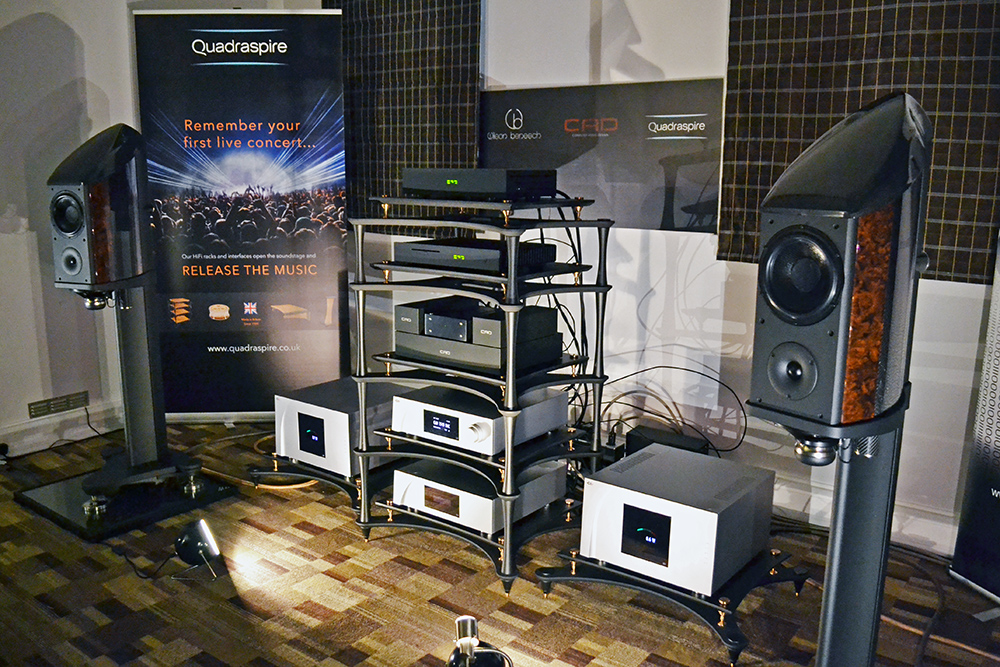 Wilson Benesch was demonstrating its Discovery II loudspeaker, powered by the Swiss electronics brand CH Precision. Digital source came courtesy of CAD (Computer Audio Design). It’s unusual to see WB being demonstrated without a vinyl source these days. The sound was still smooth and detailed, which we have come to expect from WB coming into its 30th year. 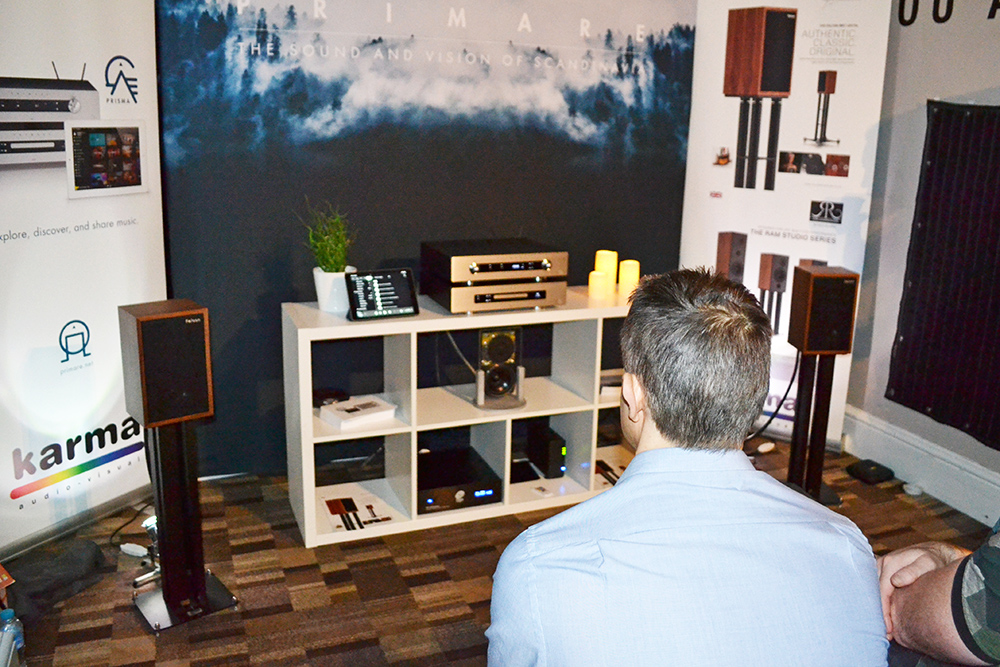 Falcon Acoustics was showing its new LS3/5a-based speaker. I learned that the company has gone to great lengths to replicate the exact materials, specs, and performance of the original BBC-licensed monitor from yesteryear. Perhaps another classic resurrected for a new generation to enjoy? The sound was that typical mid-focused balance, though it actually sounded better than I remember the original sounding. The LS3/5a was of course designed originally as a desktop nearfield broadcast monitor. It just so happened to become synonymous with the “British hi-fi sound.” The small size and lack of extension below 80Hz surely helped in smaller British living rooms. 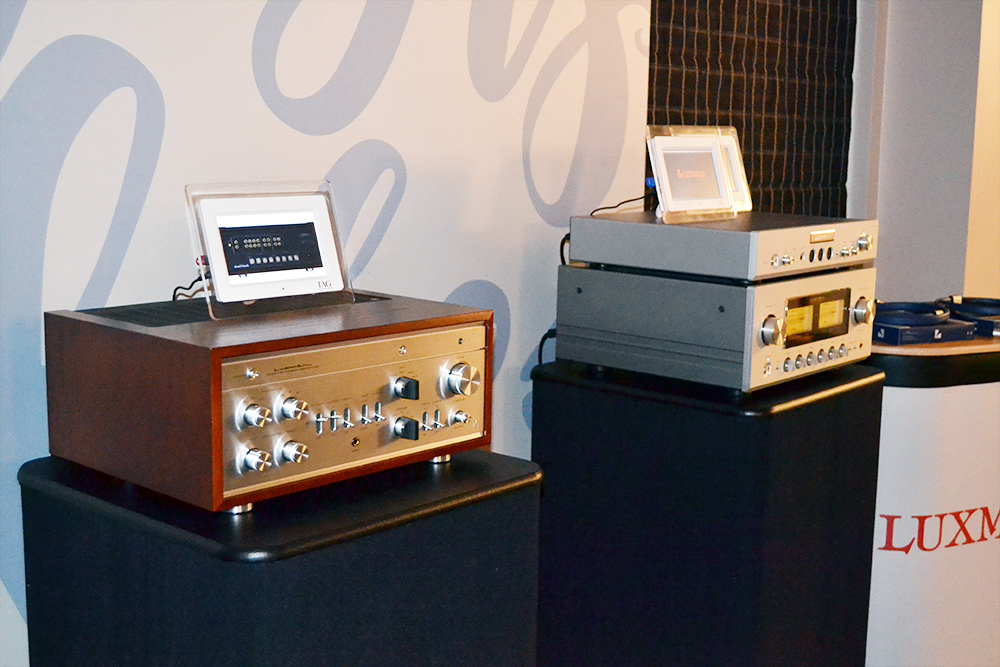 Luxman shared a room with DALI, the well-known Denmark-based speaker maker. Luxman is one of those old brands that’s often forgotten, yet it’s so well built, reflecting those early years of Japanese quality-made hi-fi components. In fact, the CL-38u (pictured above), has been introduced to cater to that nostalgic buyer. There’s definitely something about a toggle switch that screams vintage! 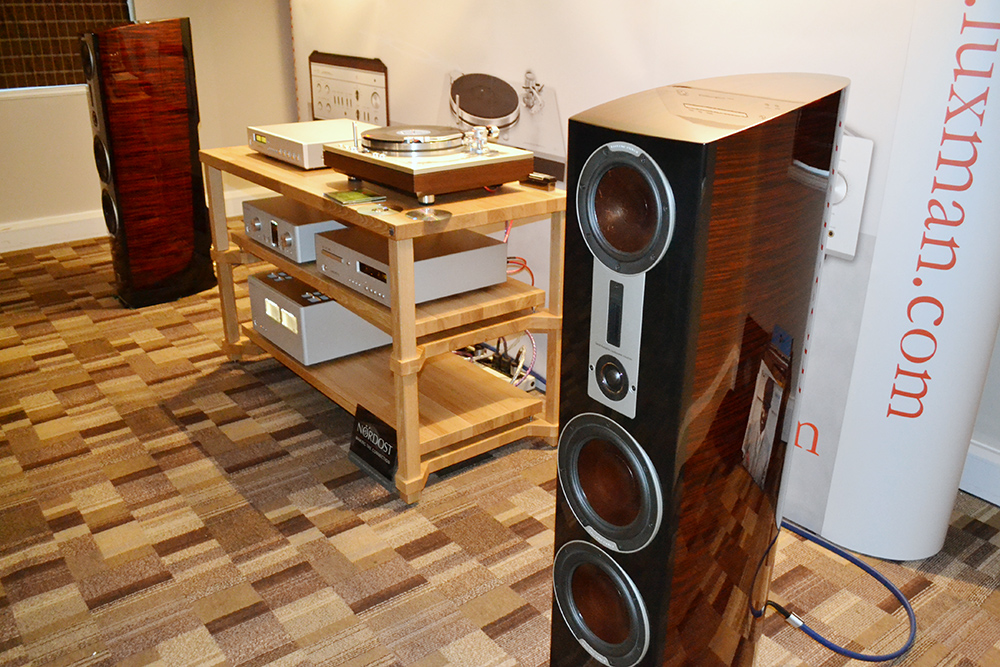 The Luxman/DALI live demo used a more modern-looking power amp (M-900u), with the C-900u preamp coupled to a D-08u disc player. DALI Epicon 8 speakers looked rather sexy in the Walnut gloss lacquer. Connections were all from Nordost. The sound appeared to be cohesive and well balanced with what seemed to be a nicely matched system. 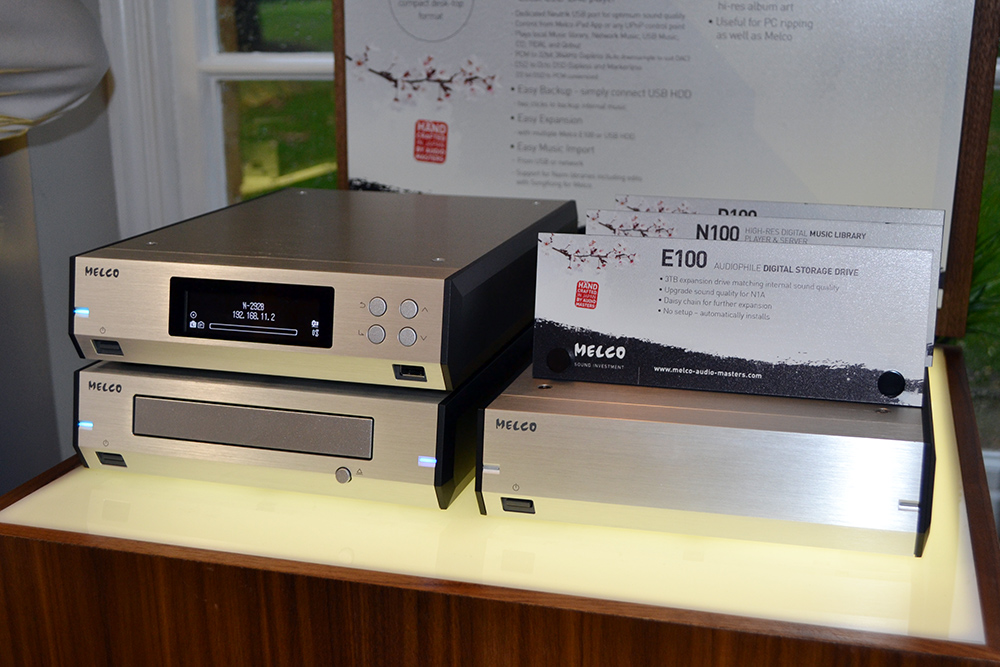 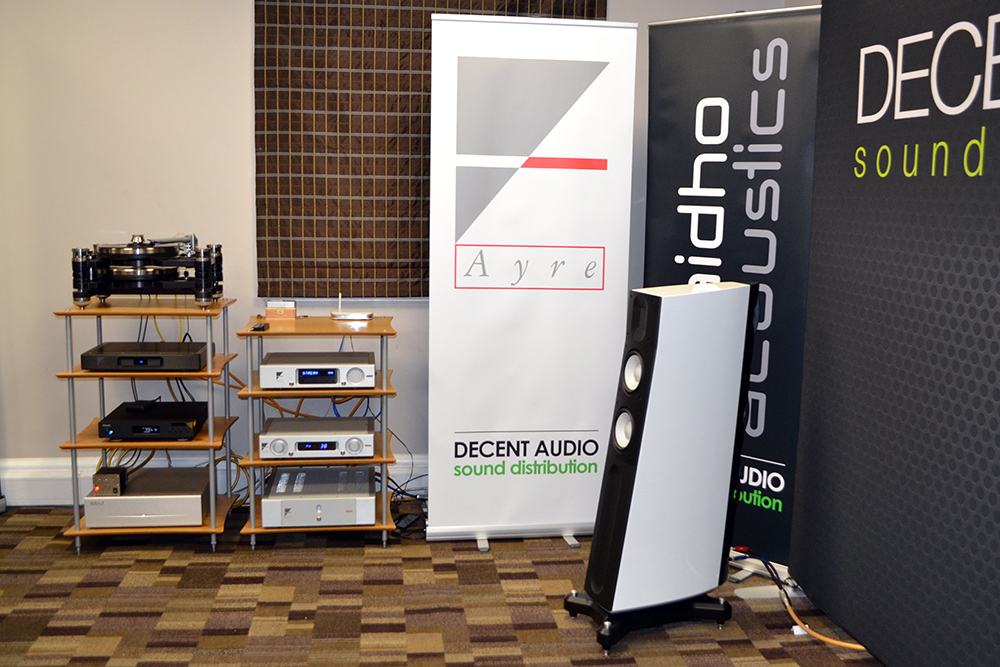 Decent Audio distribution showed off the Raidho D-2.1 speaker, the pair being powered by Ayre electronics and a Kronos Sparta turntable. The sound was clear and precise, though the choice of music could have been aimed more to impress the audience. 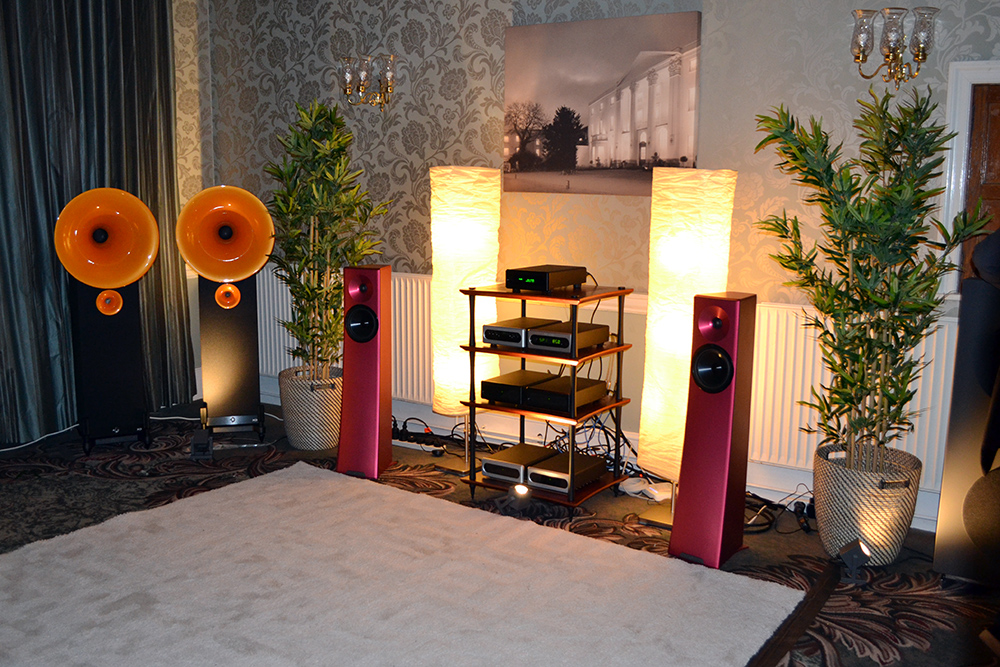 The splendid Remenham suite in the oddly named “White House” featured an eclectic mix of high-end brands from YG Acoustics, Avantgarde, Bel Canto Design, SME, and Siltech -- to name but a few. The system above comprised the svelte YG Acoustics Carmel speakers powered by Bel Canto electronics. It was difficult to get a good impression of the sound, as the room was busy, noisy, and not really playing anything that could test the system’s capability, at least when I visited. 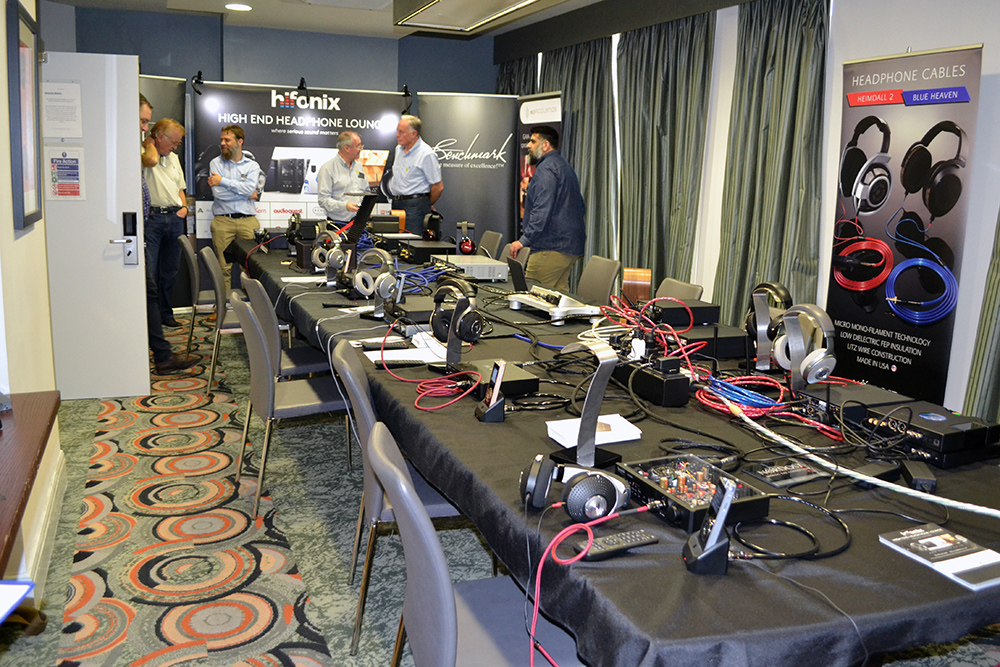 Hifonix had a wide selection of headphones and DACs on show to audition, for those seeking that personal high-end experience. These headspace demos have become a big part of hi-fi shows, booting out the TVs and AV kit, of which there was not one sign. 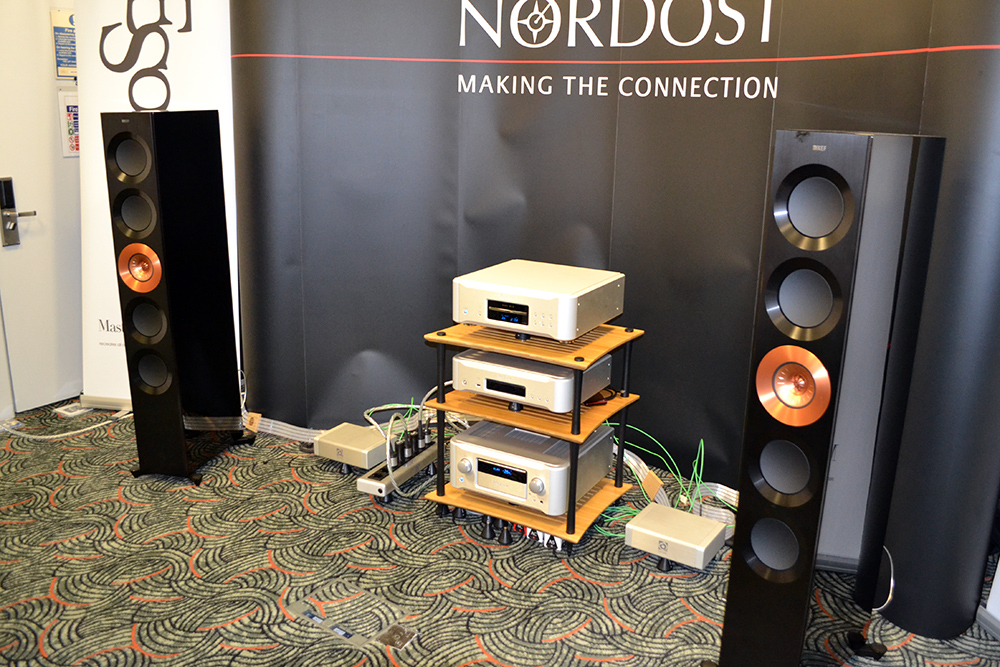 Nordost partnered with Esoteric and KEF for its demonstration. The sound was sharply focused with pinpoint imaging, for which we must thank the KEF Uni-Q driver array. Nordost had gone to great lengths to isolate and treat both signal and mains power supply feeds in an attempt to give a purer presentation and low noise floor. From a quick listen, the company appeared to have succeeded in its goals. 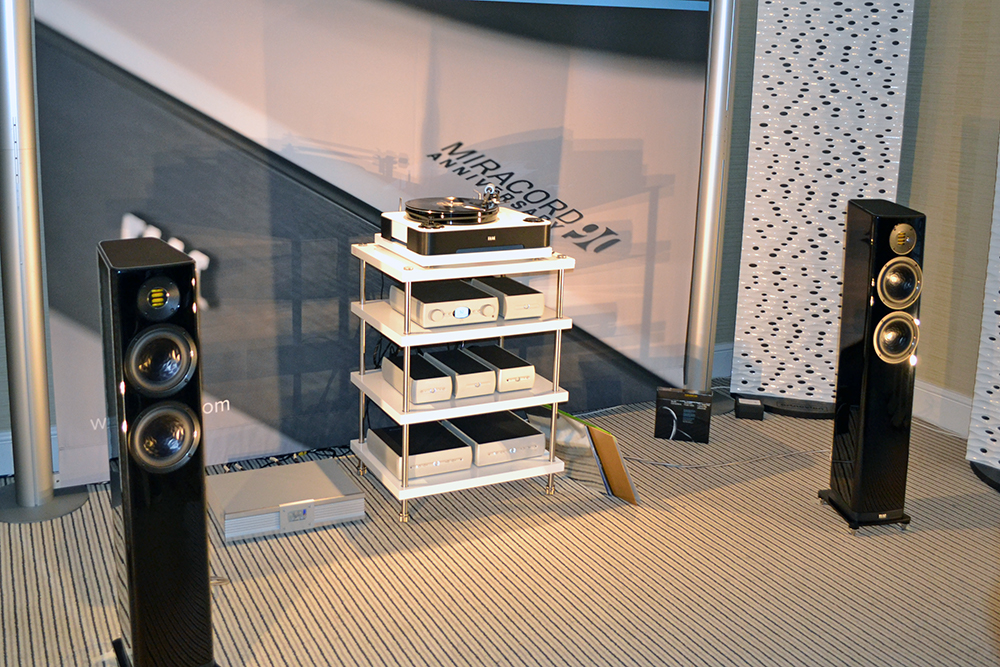 Elac showed a full complement of its own components, from the splendid Miracord 90 Anniversary turntable to a pair of Vela FS 407 loudspeakers, which feature the trademark JET AMT-type tweeter. Overall, the sound appeared to be clear and natural from this “one-stop shop” hi-fi manufacturer. I have to say that Elac always has a nicely presented room, which is light and airy with clean graphics and a general lack of clutter. 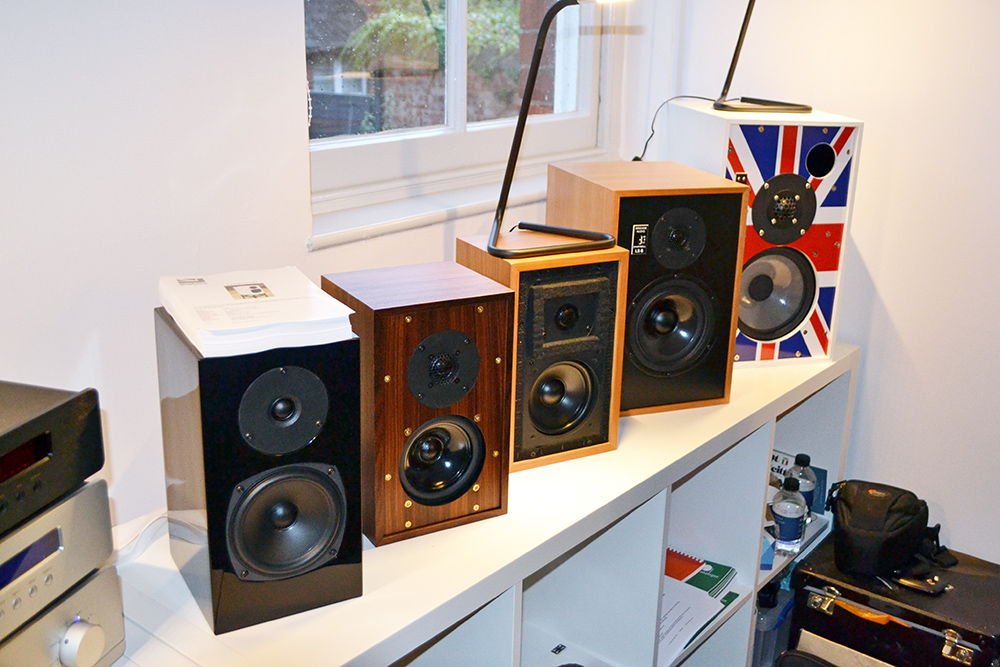 Now what room is complete at a hi-fi show without a Union Jack emblazoned upon a BBC-style monitor? Graham Audio is one of the handful of companies now re-making BBC clones. Its room was partnered with Exposure electronics. 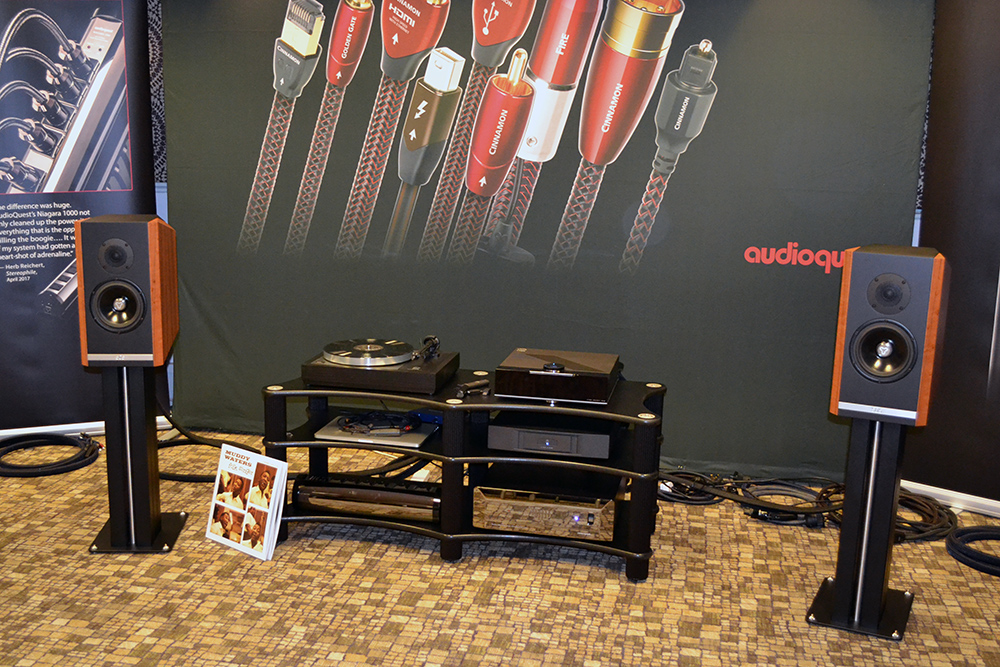 A relative newcomer to the speaker fraternity is Kudos Audio. The company showed off its new Titan 505 standmount speaker, which features an isobaric driver configuration, first popularized by Linn in the late ’70s with the classic and aptly named Isobarik. The sound was smooth, with bass extension that you wouldn’t normally expect from a standmount-type configuration -- the speakers were able to fill a large room with ease. 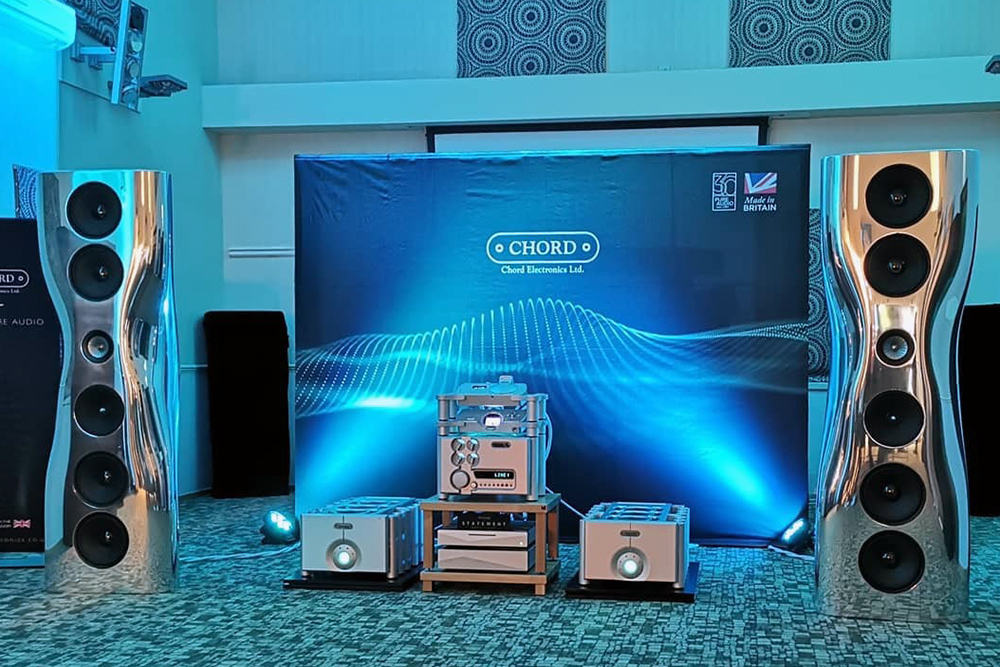 Chord Electronics was demonstrating the recently launched Ultima monoblock amps and Ultima preamp, which represent a new reference point for Chord. The all-digital source came from a DAVE DAC and Blu MkII CD transport. Speakers were the KEF Muons, seen for many years as a showpiece on a pedestal to ogle, but rarely chosen to do a live demo. An odd choice, they were still very capable. But the driver technology is dated, and I think a pair of Blade loudspeakers would have been better suited to this exhibit. Cabling was by the Chord Company, of no connection to Chord Electronics, incidentally. 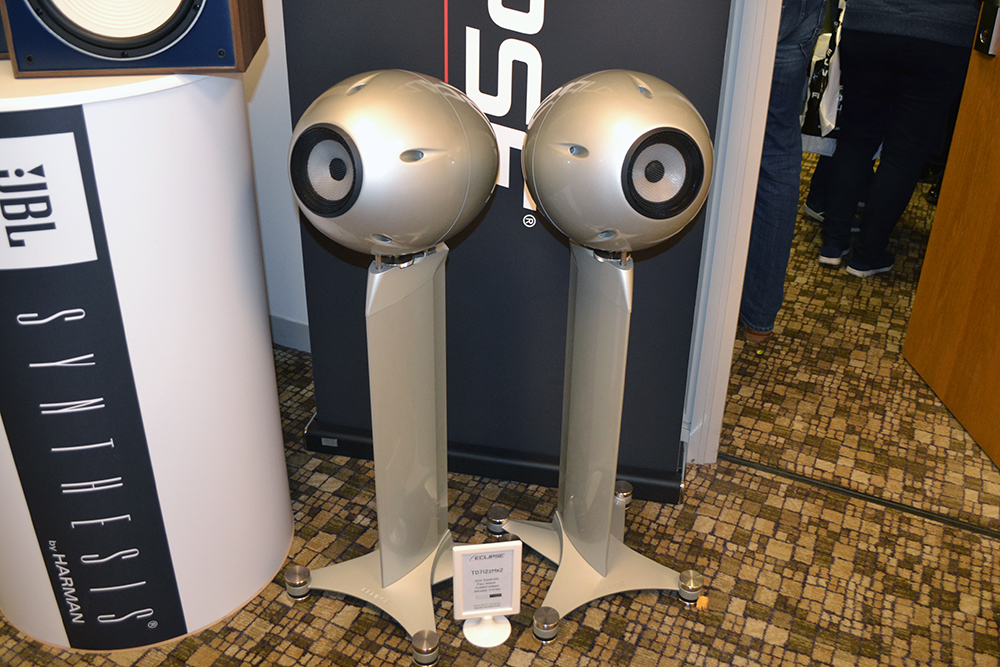 Eclipse speakers have been around for many years, and they pop up from time to time. The image projected from the full-range drivers the company uses in its models always appears to be accurate, although it can show the limitations of a small single driver attempting to cover the full audio spectrum. I often find the music is carefully selected to show off the speakers’ best side, without exposing the weaknesses. Still, they do some things other speakers cannot. 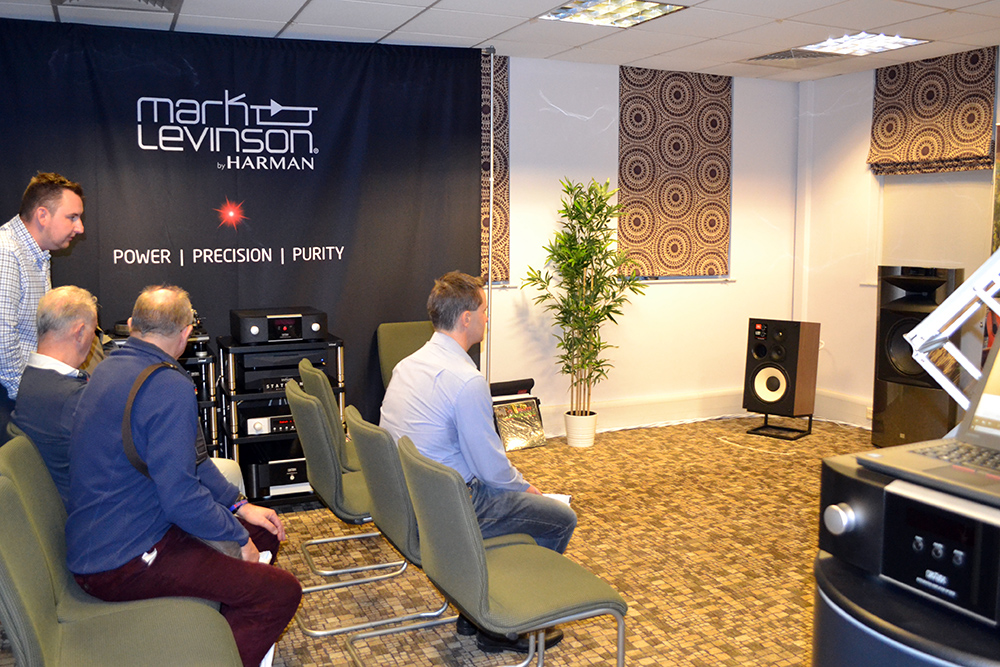 Harman had two exhibits, with this being the smaller room representing JBL Synthesis. A full complement of Mark Levinson electronics drove a pair of dynamic-sounding JBL K2 S9900 loudspeakers in a slick gloss-grey finish. 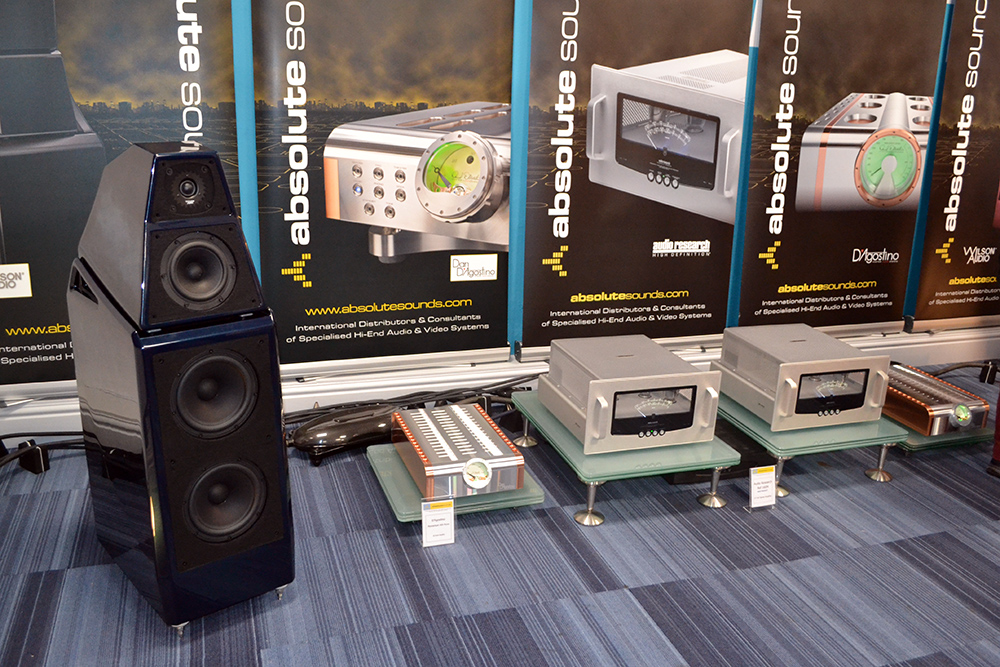 And finally, whilst I hate waiting outside a room with a ticket to enter a timed demo, I understand the need to engage with a captive audience when you’re attempting to sell exotic high-end kit. So with a typical British attitude, I waited, complaining quietly to myself. Absolute Sounds is one of the country’s most prestigious distributors of exotica, representing brands like Audio Research and Wilson Audio for decades. I don’t like the fact that many hi-fi brands selling high-end kit don’t seem to bother engaging with the audience and working the room better. Absolute Sounds, on the other hand, created a sense of occasion. The first demo was built on a pair of Wilson Audio Sasha DAW speakers powered by Audio Research Reference 160M monoblocks and a Reference 10 preamplifier, with DCS supplying all DAC and source equipment. 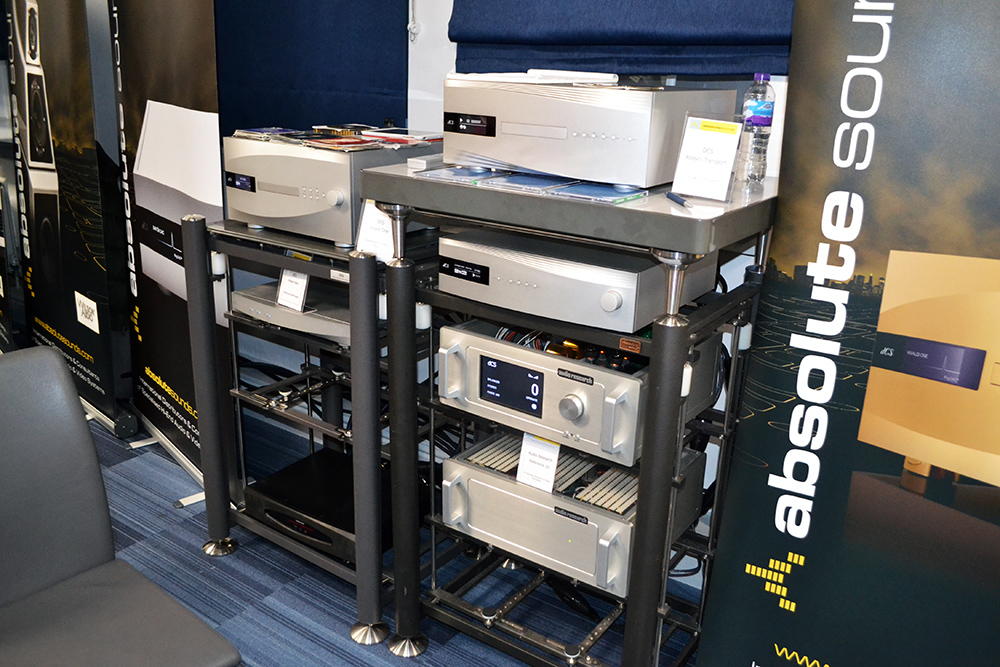 Interestingly, the talk and demos were more about music -- specifically, the sonic differences between identical recordings made on conventional CD remaster (£40), CD-R burnt 1:1 from original master tapes (£150), and one of the fabled crystal glass variants at a cool £2000 in limited numbers. The sonic results were enlightening to say the least. 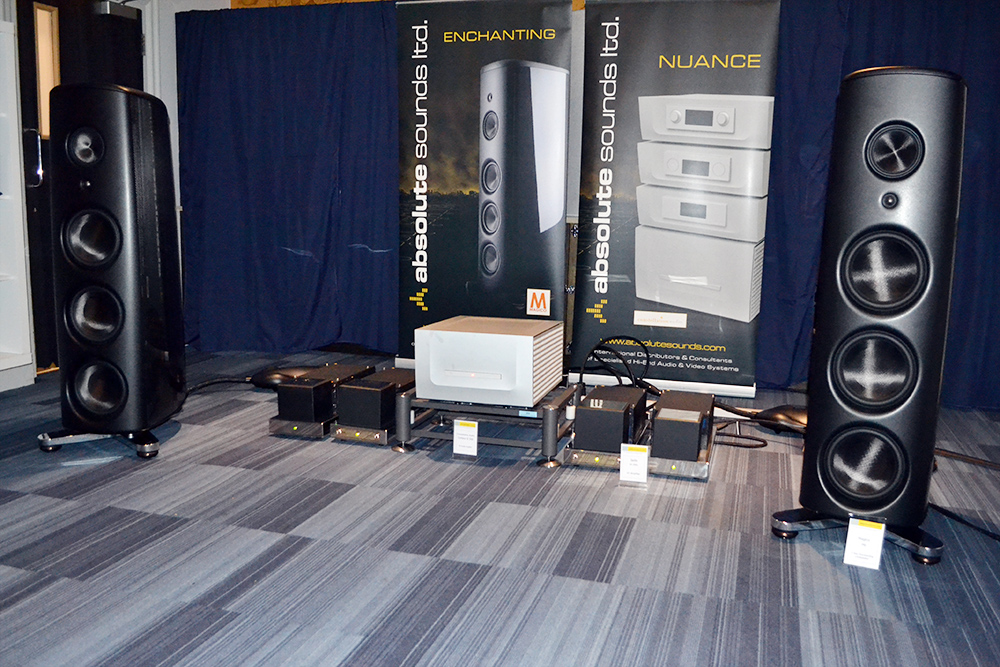 The second timed demo (in the adjacent room) comprised equipment from Jadis and Magico (M6 speakers), as well as an all-analog last session of the day. This talk was again about music recordings, but it focused on pre-digital vinyl pressings.

Whilst the Hi-Fi Show Live 2018 couldn’t fill the shoes of its ancestral past, the organizers are making an effort to put the high-end audio event back on the map. Gone are the big rooms with big screens and booming subs -- you’ll now find more sedate musical experiences. And for those looking for peace and quiet, the headspace exhibits will hopefully attract a younger audience to experience what high-end hi-fi can offer. A blend of analog, digital, tubes, horns, and audiophile exotica made for a varied and interesting show. However, I can’t help thinking that the high-end space missed a choice for audio enthusiasts looking for more technology. For that, only one company was on point: Kii Audio.

In a bold move for next year, the show is moving to Royal Ascot and shifting up a gear with an increased number of spaces available to exhibitors. The show missed a few big brand names, some of whom exhibited at the Festival of Sound in London a few weeks earlier. I can see these brands moving over to the Hi-fi Show Live for 2019, making it an interesting date on the calendar.