The Devialet Revolution: A Conversation with Co-Founder Pierre-Emmanuel Calmel

France's Devialet has been on quite the tear recently. From the expansion of its Expert amplifier range to the introduction of technologies such as SAM (Speaker Active Matching), and, most recently, the appearance of their exciting Phantom all-in-one loudspeaker, the rapidity of its innovation is matched seemingly only by its ambition to one day have its products be ubiquitous. At this year's High End show, the firm introduced version 8.0 of its firmware and demonstrated its impressive Phantom models. I was fortunate enough to have an hour to chat with co-founder Pierre-Emmanuel Calmel about anything I wanted, and the wide-ranging conversation was illuminating to say the least. 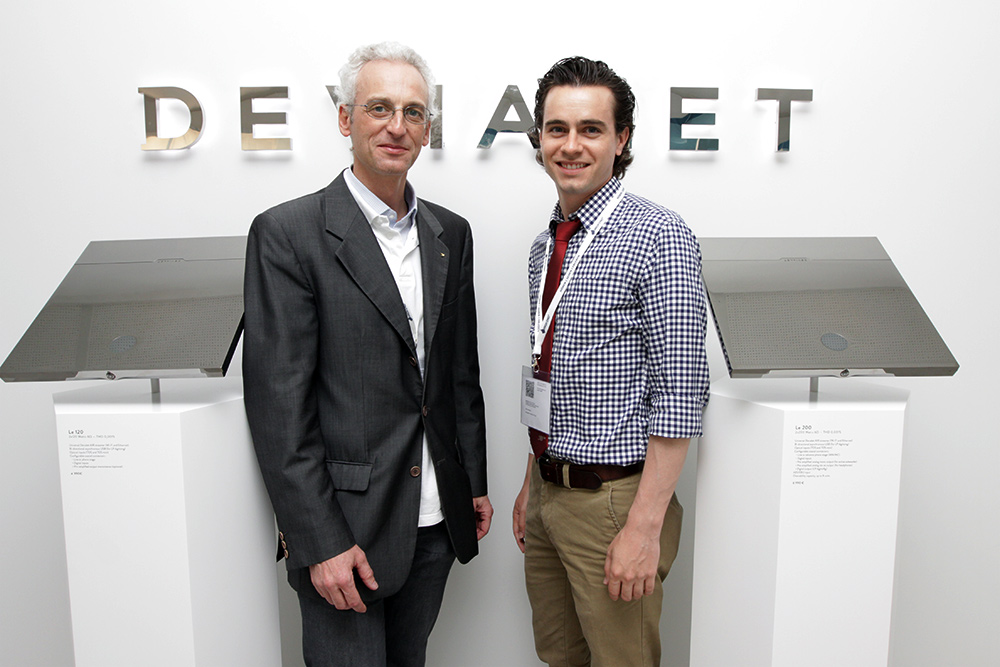 Pierre is not your typical audio engineer. The creator of the ADH (Analog Digital Hybrid) amplifier was articulate and confident, yet he had a relaxed demeanor and a good sense of humor. Delving into the company's philosophy, he spoke with the vision and sensibility of someone with extensive business experience. "Phantom was the idea behind our tagline at the 2013 High End show that 'One day, everyone will own a Devialet.'" The Phantom project, it turns out, was born three years ago as a collaboration with Swiss Audio Design, a company with loudspeaker experience that shared Devialet's vision of an all-in-one loudspeaker, so to speak, with built-in amps and electronics in a consumer-friendly design. Swiss Audio Design was then absorbed into Devialet, and a large team began brainstorming ideas.

After eight months, the Devialet contingent arrived at a traditional bookshelf design, and Calmel decided that they had stumbled down the wrong path. "We need to be much more disruptive," he said in perfect English, laced with a heavy French accent. "Being a second product, we wanted Phantom to be a revolutionary, breakthrough product." What they did have at that time was a firm figure of a loudspeaker weighing no more than 10 kilograms, and with an internal volume of no more than 10 liters. Any bigger or heavier, and Calmel said the Phantom would look monstrous to the average consumer. It turned out to be an enormous challenge. "We had to fight for each millimeter of dimension, and everyone was targeted to the same goal. If there was an issue, it became an issue for everyone, including the design, mechanics, electronics, and acoustic teams." 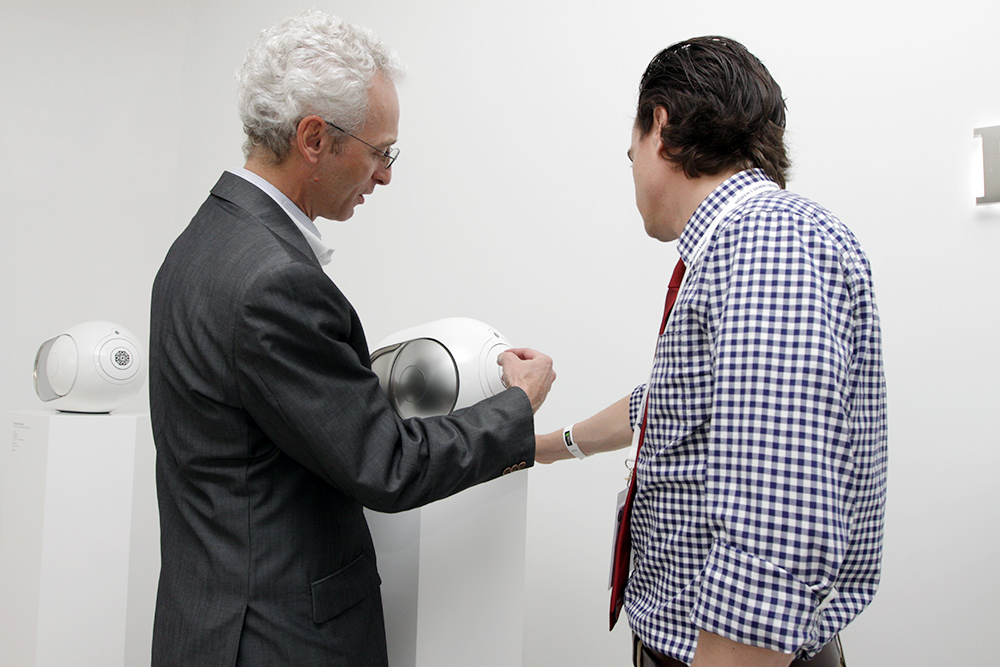 Calmel talks about the Phantom project

Instead of encountering an obstacle and looking for an alternative, his teams worked fervently, "day and night," to find a way to make their vision work. Calmel talked with verve about the finest of details and how he and his engineers were able to overcome them. If you couldn't tell, there is an Apple-like obsession with perfection here. Nothing less is sufficient. Devialet invested two years of R&D work and over a million euros to miniaturize the ADH used in their Expert line for use in the Phantom. Is the amp in the Phantom every bit as good as the one in the Expert line? "That was the minimum requirement," Calmel told me matter-of-factly.

Shifting to version 8.0 of the Expert line's firmware, Calmel fires off a feature set that is ambitious as hell. In one fell swoop the company is able to offer incredible improvements courtesy of Devialet's Evo hardware platform. With Record Active Matching (RAM), Devialet has enabled its entire line of amps (except for the 120) to adjust multiple phono-stage parameters in real-time, including EQ curves and cartridge sensitivity. The company provides a raft of curves on its website, organized by manufacturer and model, effectively upgrading each Expert amplifier with a flexible, high-quality phono preamp. It has also updated its SAM software to SAMV2, permitting even greater power protection of a loudspeaker and better group-delay stability, allowing Devialet to offer SAM compatibility with most every loudspeaker available today. With its forthcoming SAM Lab hardware, dealers, and possibly listeners themselves, will be able to "SAM" their own individual loudspeakers. Oh, and the Expert line now supports DSD over PCM (DOP) through all of its digital inputs. All this, mind you, via software, on hardware that hasn't been updated in two years. "The Expert line still has additional processing headroom -- there is a lot more that we want to do," he said with a grin. 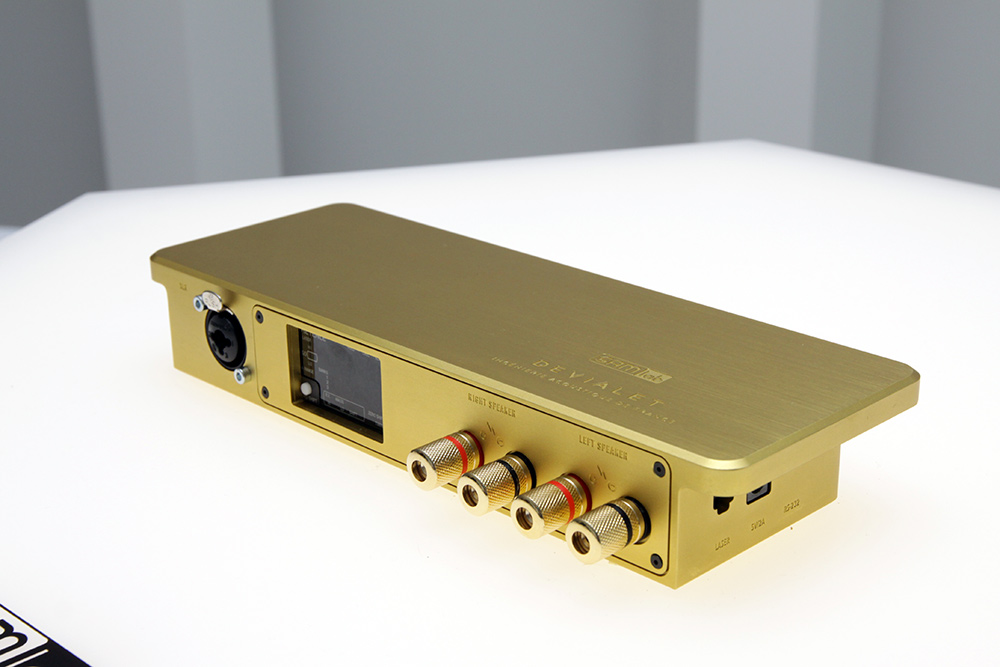 Wrapping up, Calmel ruminated on the company's roots and its future, explaining, "If you never dream of walking on the moon, you never will. With Phantom, you see the product and you're smiling." The future looks bright for Pierre-Emmanuel and his company. They have plans to open up dedicated flagship stores in the biggest cities around the world, including London, New York, Shanghai, and Berlin. The goal is to be shipping worldwide, producing a Phantom every two minutes from the company's fully automated, dedicated factory, by the end of the calendar year. Having heard what the Phantom is capable of here in Munich, I have no doubt that they'll sell well. Devialet, it seems, is playing a different ballgame from any other audio company out there. By the look of things, I think it's going to win.