The British Are Coming! Affordable Loudspeakers from KEF and Monitor Audio

It really is a terrific time to be an audiophile on a budget. Terms like low-fi and mid-fi are, to my mind, pretty condescending to an integrated amplifier or floorstanding loudspeaker that happens to cost less than $2000 -- and possibly far less! -- but may punch far beyond its weight class. Thanks to the rapid advances in Chinese production and quality control, once-boring vinyl-clad, folded-box loudspeakers have flourished into surprisingly handsome and grown-up furniture. I am continually surprised when, every few years, the heavy hitters of audio update a range of speakers and, for a modest increase in price, offer a disproportionately large jump in material and build quality, to say nothing of aesthetics. Such is the case this year with KEF having updated its Q series, and Monitor Audio its Silver series of loudspeakers, with both storied English brands having airdropped their wares a thousand kilometers due east of Normandy. 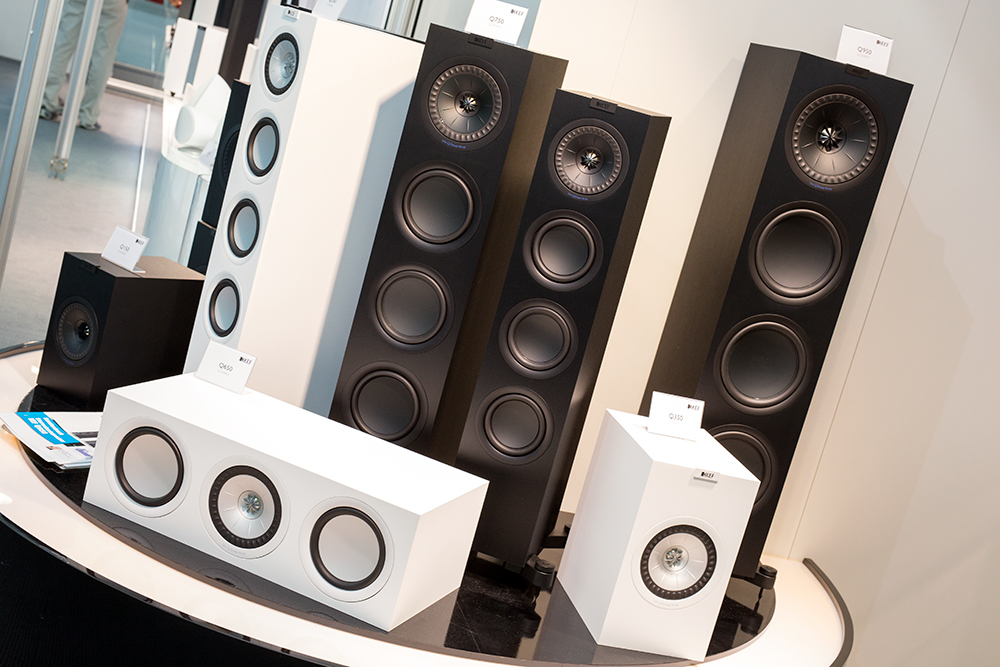 First and foremost, KEF appears to be hopping on the passive radiator bandwagon, which has come back into vogue over the past several years. While the Q150 and Q350 only make use of KEF’s Uni-Q -- the company’s signature coaxial and coincident tweeter-midrange unit -- in a ported configuration, their center and floorstanding siblings go port-less, opting instead for a pair of passive radiators. I strongly suspect that KEF’s head of acoustics, Jack Oclee-Brown, has tread this path because, like GoldenEar Technology’s popular Triton towers, it’s a convenient way to get big, clean bass out of a relatively small cabinet without having to invest in another woofer with a full magnet structure. 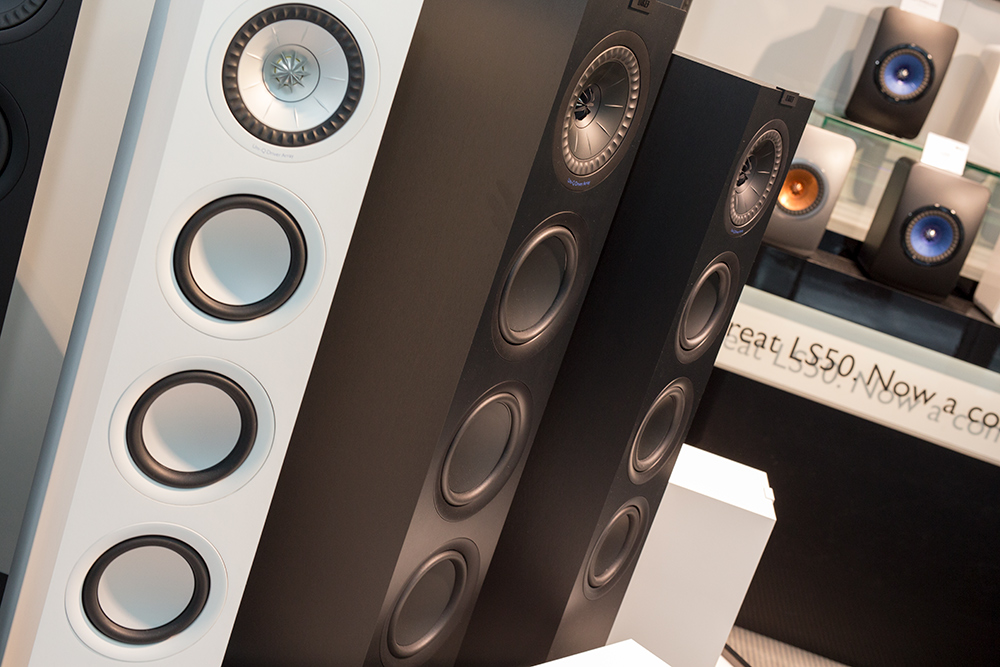 It’s also worth noting that satin finishes appear to be all the rage, with at least one or two of KEF’s direct competitors offering identical paint jobs. I’m particularly taken with the floorstanding models -- all of which are two-and-a-half-way designs -- finished in Black Satin: they look like baby Q-series Magicos for a tiny fraction of the price of their Hayward, California, contemporaries. I can’t say if they sound any good because they were on static display when we spoke with the KEF folks, but I’m more than a little curious about what the blokes from Maidstone have crafted. 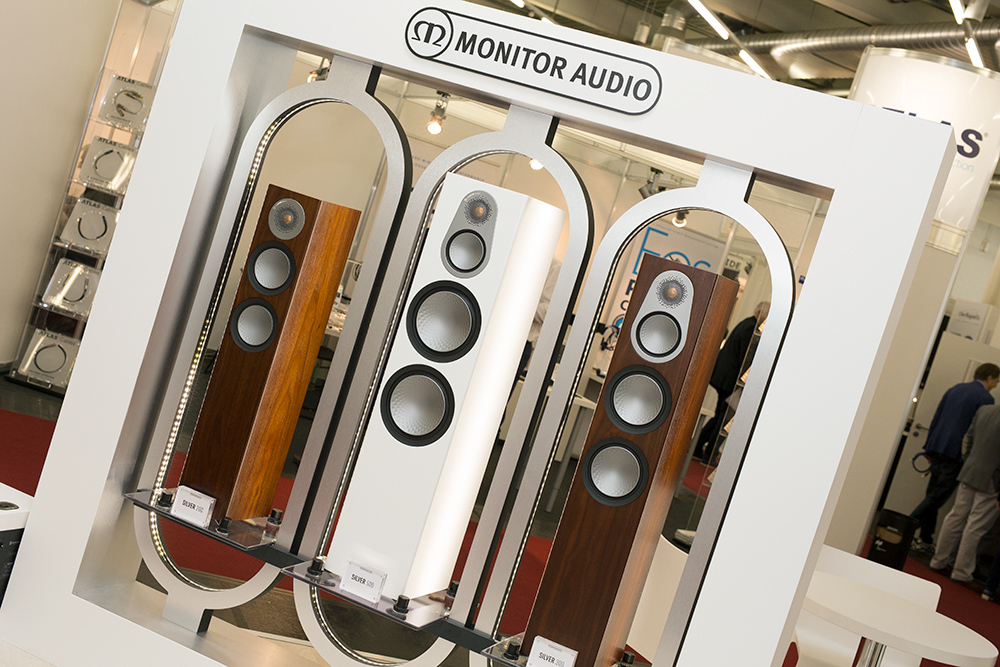 The new Silvers bear a clear resemblance to the models that they replace, but with changes both skin deep and under the bonnet. All of the drivers are ground-up redesigns, from the gold-dome C-CAM tweeter to the dimpled RST midrange and bass cones. The “dish,” or depth, of the 4” RST midrange and 5.25” midrange-woofer has been increased to allow for greater extension and linearity in the upper midrange and lower treble, allowing Monitor to push the crossover point for the gold-dome tweeter to between 2.5kHz and 3.2kHz, depending on the model. This reduced strain on the tweeter leads to less distortion at the crossover point, and therefore cleaner midrange performance. 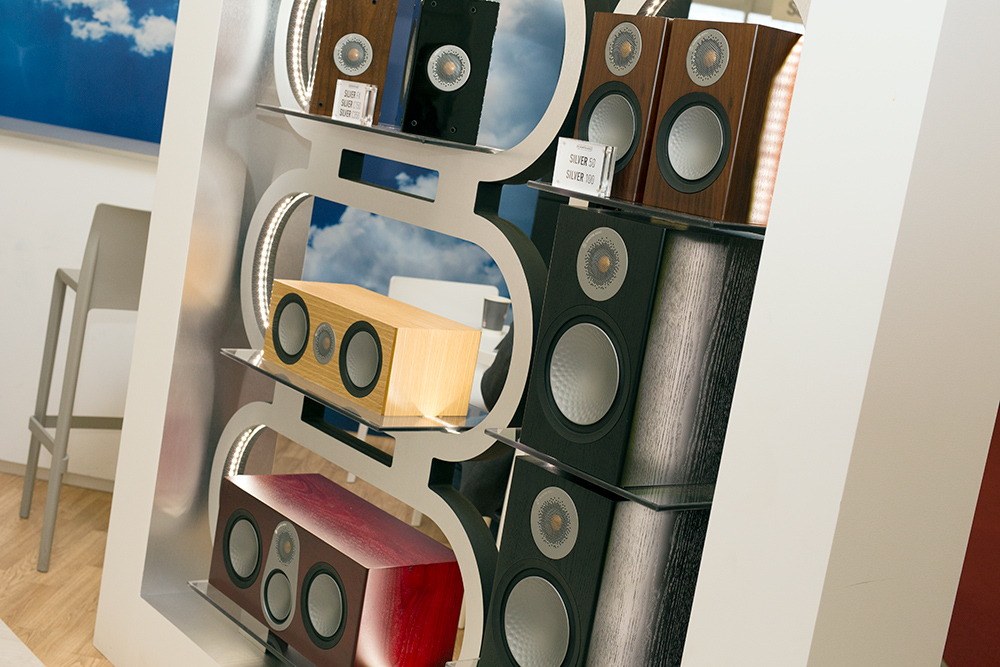 Monitor’s technical director, Dean Hartley, demonstrated the small Silver 200 by playing some Red Hot Chili Peppers and Metallica, and I noted several things. First, the aesthetic changes to the Silver line are subtle but numerous, with softer cabinet edges, updated footers, and brushed-aluminum accents all contributing to loudspeakers that are notably nicer to look at. Moreover, having previously owned a pair of Silver 10 floorstanders -- replaced by the new Silver 500 -- I detected slight improvements to midrange clarity and acuity, with stereo imaging seeming to improve as a result. That new tweeter shone through, too, in the form of a smoother, sweeter top end -- no mean feat given that the prior Silver-series tweeter was quite good for the money. Finally, I was genuinely surprised that the little two-and-a-half-way -- armed only with a pair of 5.25” drivers providing low-frequency output -- sounded so taut on kick drums, with healthy extension that never turned overwrought. Don’t let their slender, décor-friendly cabinet size fool you: The Silver 200s can seriously rock out, remaining composed even at high volume. 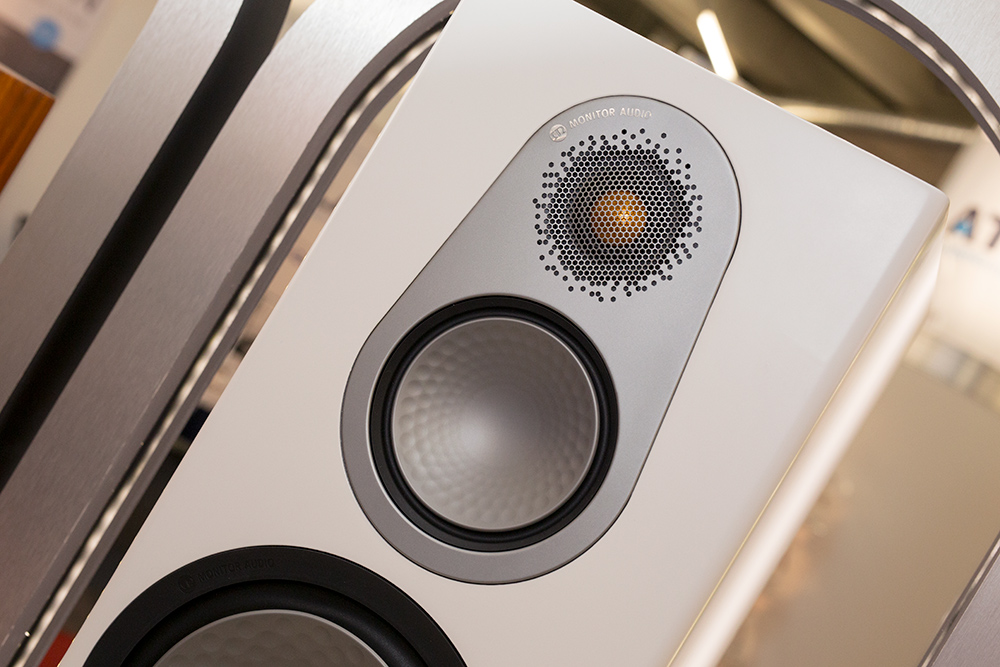 At a show where jaw-dropping prices have become uncomfortably common, it’s refreshing to see these companies’ engineering wizards contriving to produce so much performance for so little money, meaning that hi-fi remains relevant to as many music lovers as possible. Dear KEF and Monitor Audio marketing peeps: care to donate a pair or two for a real charity case? Asking for “a friend.”