I wrote the first High End 2022 product-coverage article we published, and then I turned my attention to taking most and editing all of the photos. But during that time with the photos, I came across a number of products I knew that the others on the team didn’t get, and I wanted to make sure they got published—so that’s how I ended up writing this final product-coverage article. All prices are in US dollars or euros. 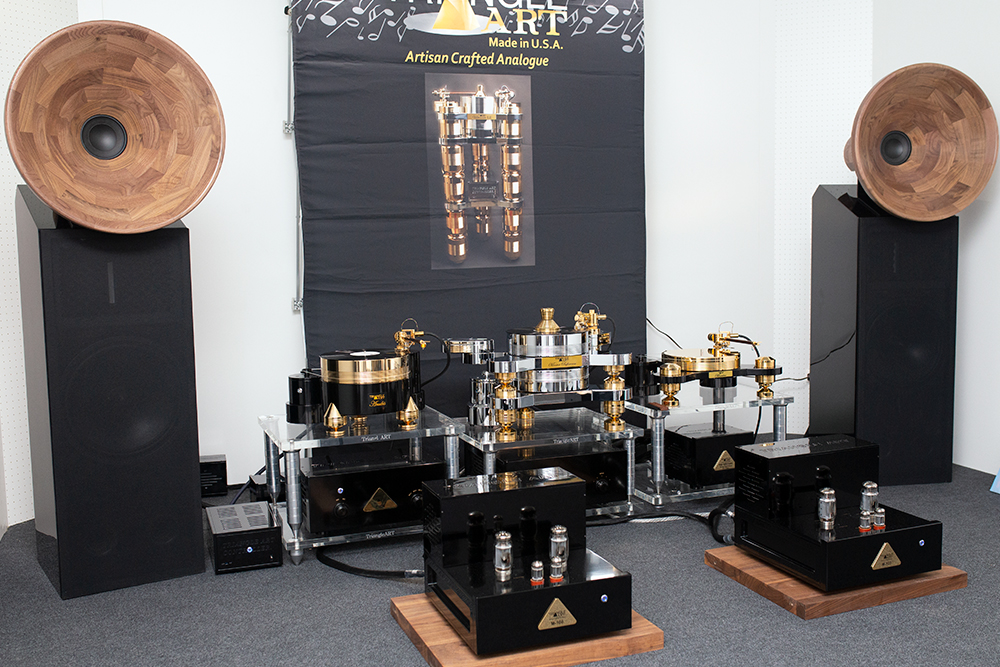 Seeing all this new stuff surprised me, because the company, which has operated since 1999 and is based in Anaheim, California, USA—the home to Disneyland—has been known mostly for its turntables, which is how it started out. But over time, TriangleArt expanded into electronics, cables, and now, through the Metis, the speaker market as well, since it’s the first we’ve ever seen from this crew. Obviously, the company wants to offer complete systems, but with a twist, because all of the products are different than what you get with most. We hope to visit this company soon—and will probably drop into Disneyland as well. 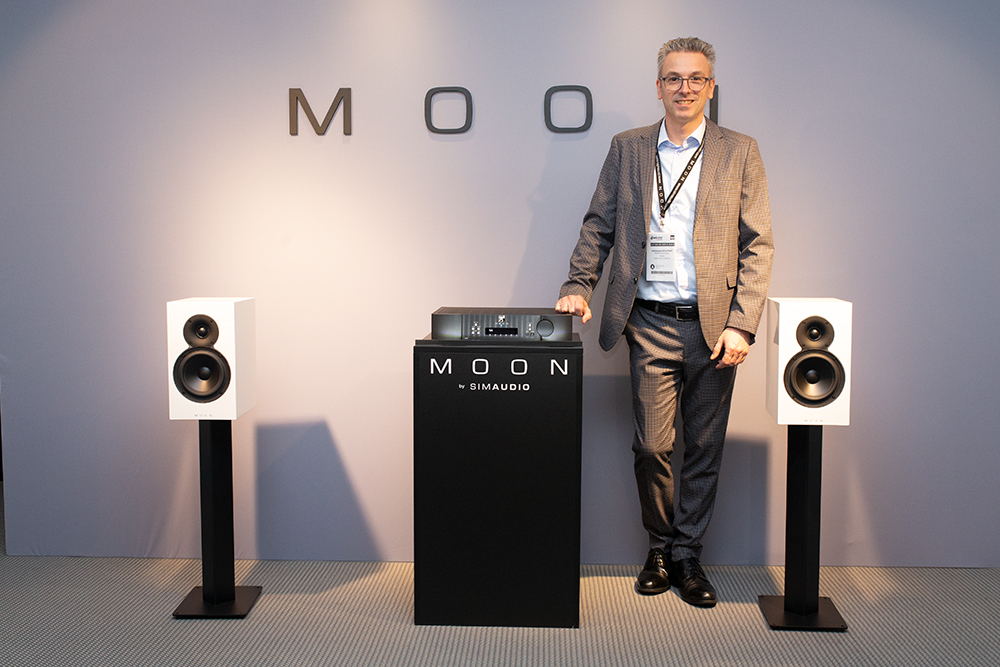 High End 2022 was the first time Simaudio showed its Moon Voice 22 loudspeaker—it was released on May 5. But we’ve known about this speaker for a fairly long time because we produced two videos about it: one video talks about the reason Simaudio, until now an electronics maker only, chose to get into loudspeakers; the other focuses on the design details. Product manager Dominique Poupart (in photo above) features prominently in both. We also published a review of it that I wrote on SoundStage! Hi-Fi on May 15. 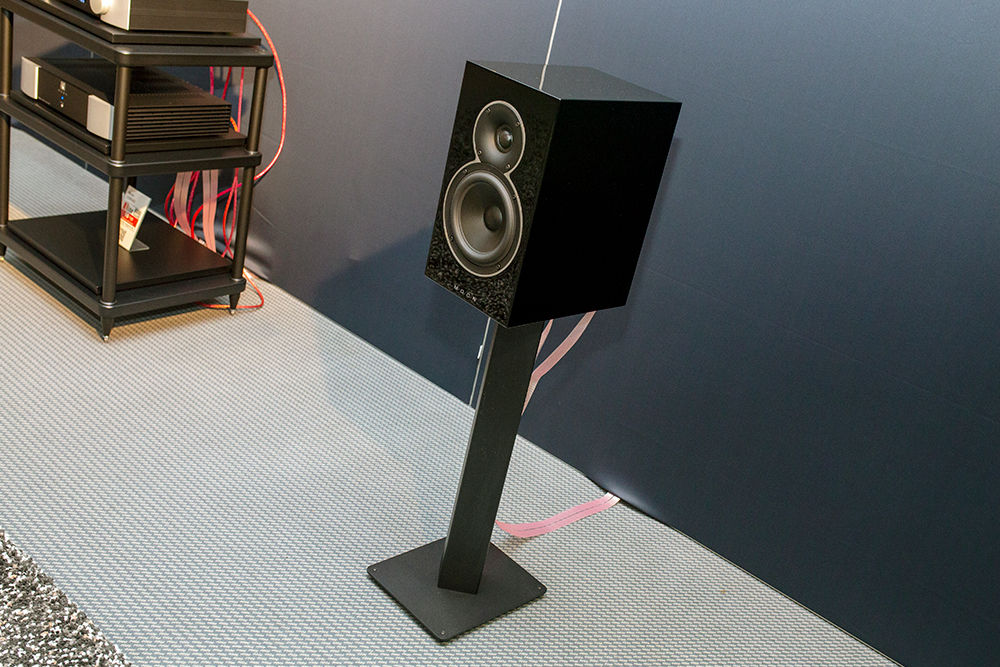 I encourage you to watch both videos and read the review to get most of the details. But quickly here, I’ll point out the highlights. The Voice 22, which is priced at €3000 per pair, is a two-way standmounted loudspeaker with a 1.1″ tweeter and a 6″ midrange-woofer. Distinctive features include its purposefully designed tweeter waveguide, low 1500Hz crossover point, and patent-pending technology called Curved Groove Damping for the cabinet walls. The Voice 22 is a small speaker, but even in the fairly large space at High End 2022, it provided a room-filling sound, which didn’t surprise me—I found the same when I had the Voice 22s set up in my home. 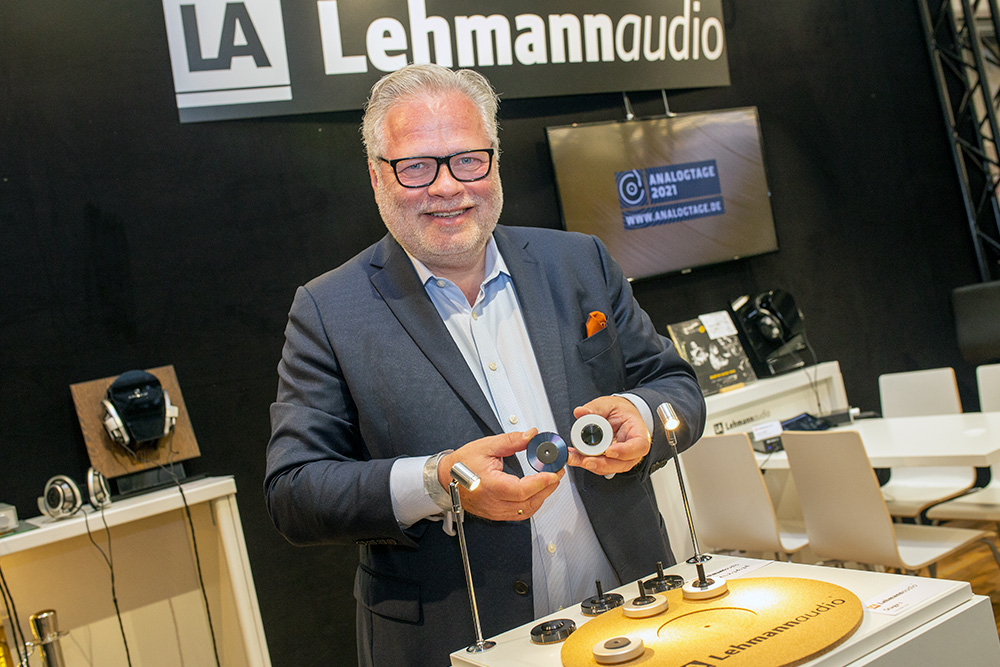 Confession time: I used to skip over hi-fi tweaks so I could get more of the big products. But when I ran into Lehmannaudio’s Norman Lehmann (in photo above), who made his name with his company in the 1990s with a phono stage called the Black Cube, I felt compelled to examine his 3S component isolators because he tends to make good stuff. 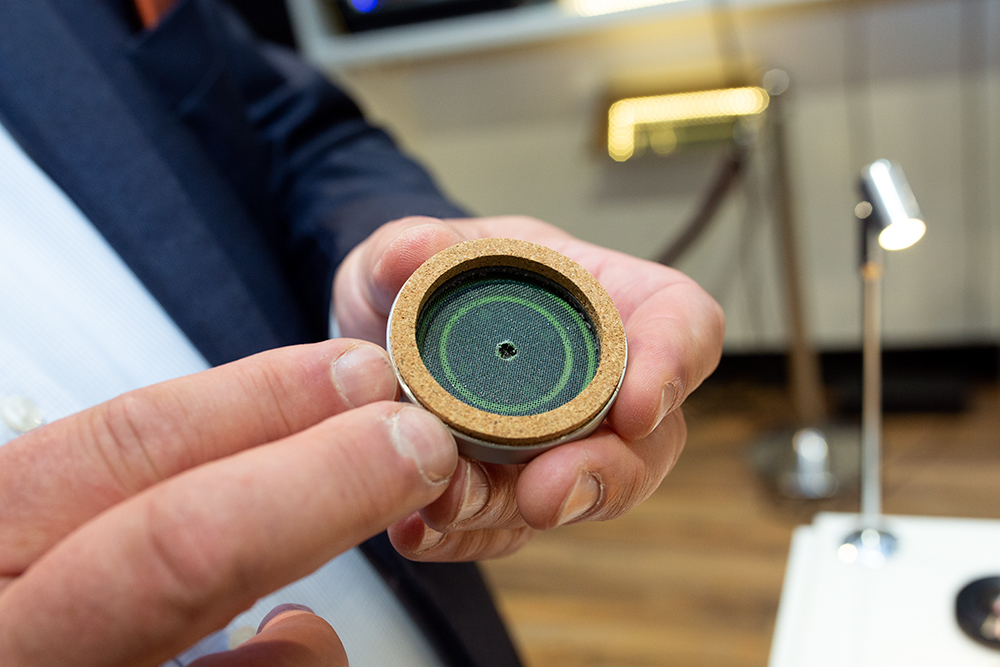 Lehmann told me that 3S stands for “string suspension system.” There are various models priced from €180 for a set of four for the models that have some sort of rubber or foam disc on the very top, to €200 for four for the ones with an aluminum disc on top. All models are pretty much the same—the main round part is made of aluminum with a cork ring on the bottom, which is what rests on the surface. Underneath and kind of inside each is this green-looking disc, which Lehmann told me has layers of other materials you can’t see. The green-looking disc was created by Manfred Diestertich, the designer of Audio Physic’s speakers. Lehmann also told me he only likes products that produce “real results,” so he showed me the outcomes from a bunch of measurements that illustrate how well his footers suppress resonances. For those into hi-fi tweaks, the 3S isolators are probably worth trying.

It’s now time for some products that’ll be made in limited quantities. 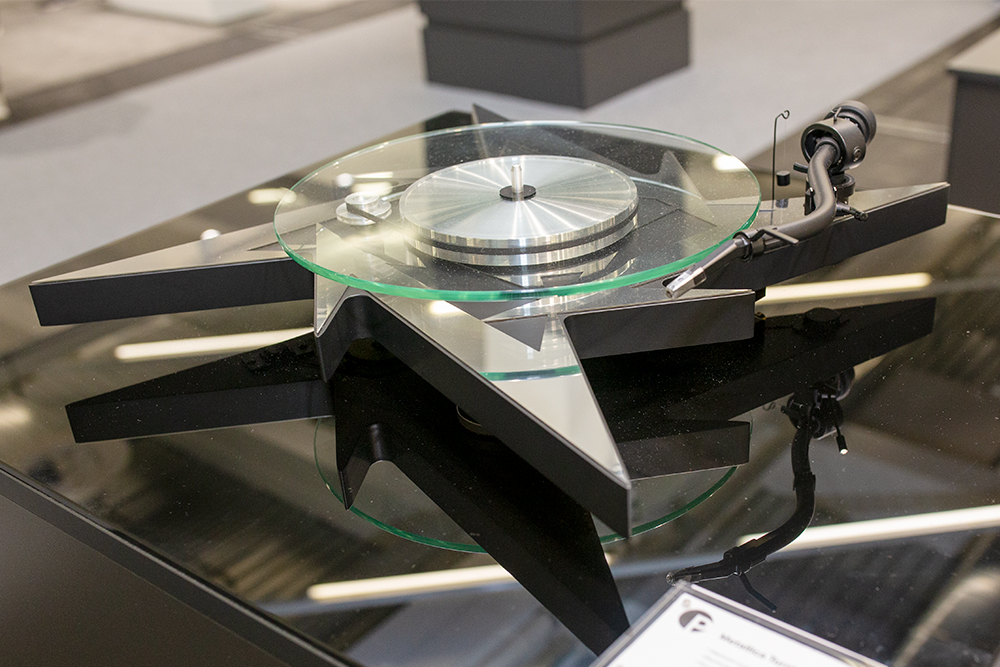 When walking by the Pro-Ject Audio Systems display, I knew I had to photograph and get the details on the company’s new Metallica-themed turntable the moment I saw it. But it wasn’t because I’m a fan of the band—I haven’t even listened to a single album. It was because of its unique shape, which I thought was really creative and a whole lot better than, say, simply painting an existing turntable’s rectangular-shaped plinth with a graphic. With this, Pro-Ject has gone above and beyond.

Priced at $1599 and available in limited quantities, the turntable has a specially shaped MDF plinth with a “mirror finished metal top plate,” and the platter is “heavy glass” with an aluminum sub-platter. The tonearm, which is 8.6″ long, is one of Pro-Ject’s own designs, as is the cartridge, the Pick it S2 C, which is a moving-magnet design. Nice work! 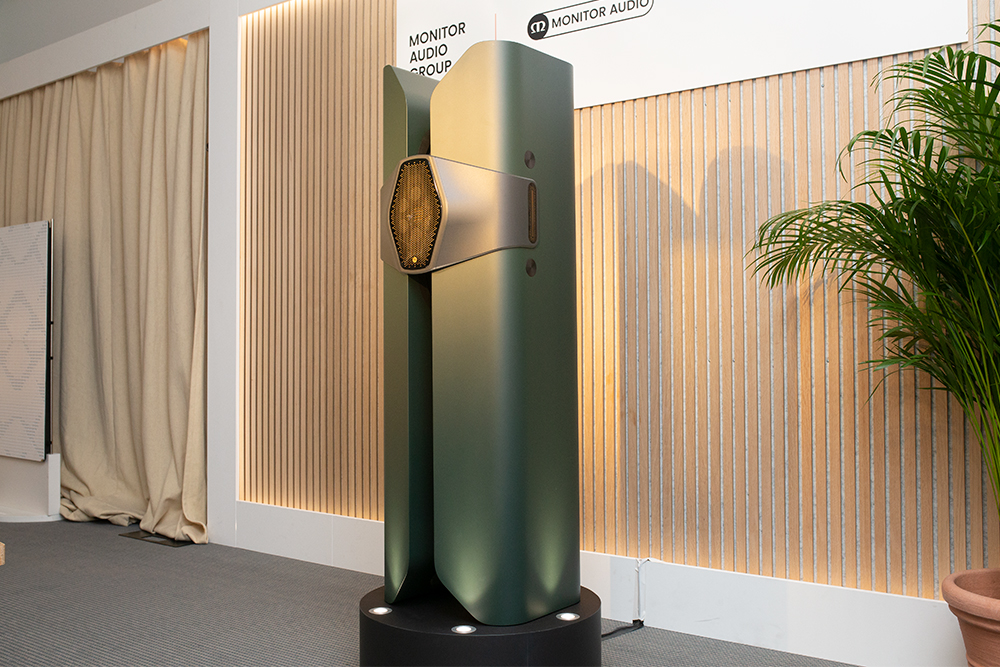 Monitor Audio was established in 1972, so this year is the company’s 50th year and a celebration is in order. Part of the celebration includes the Concept 50 loudspeaker (shown above). It isn’t a finished design, but it was being played at High End 2022, probably to gauge consumer reaction, since it’s so different from anything Monitor Audio has done before. But I’m not going to spill much ink on it here because Edgar Kramer already wrote something about it for our High End 2022 coverage—and I’m going to write much more about it for SoundStage Hi-Fi for the June 1 update. 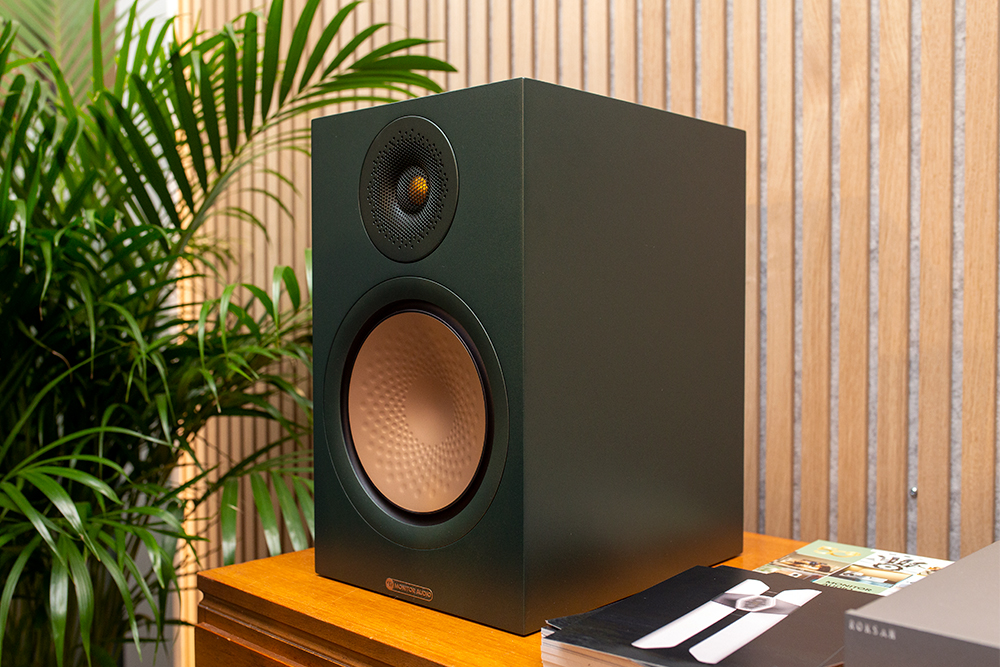 What I am going to talk about is the other 50th-anniversary loudspeaker that Monitor Audio unveiled: the Silver 100 Limited Edition. The Silver 100 Limited Edition is priced at €1300/pair and is, from what I could tell at the show and from the information on the website, technically the same as the existing Silver 100, which isn’t a bad thing because that’s a really good loudspeaker. Instead, MA is selling its rarity and its cosmetic embellishments. According to the company’s website, the “in-house designers have given the Silver 100 Limited Edition a classic Heritage Green finish and an anodised gold C-CAM bass driver, creating a luxe aesthetic befitting for our ‘Golden Jubilee.’ An exclusive gold effect badge adorns the rear of the speaker, showing the edition number and our 50th Anniversary branding. Each speaker will also be accompanied by a certificate of authenticity.” Even if it performs the same as the Silver 100, I’m considering snapping up a pair—50th anniversaries are special. 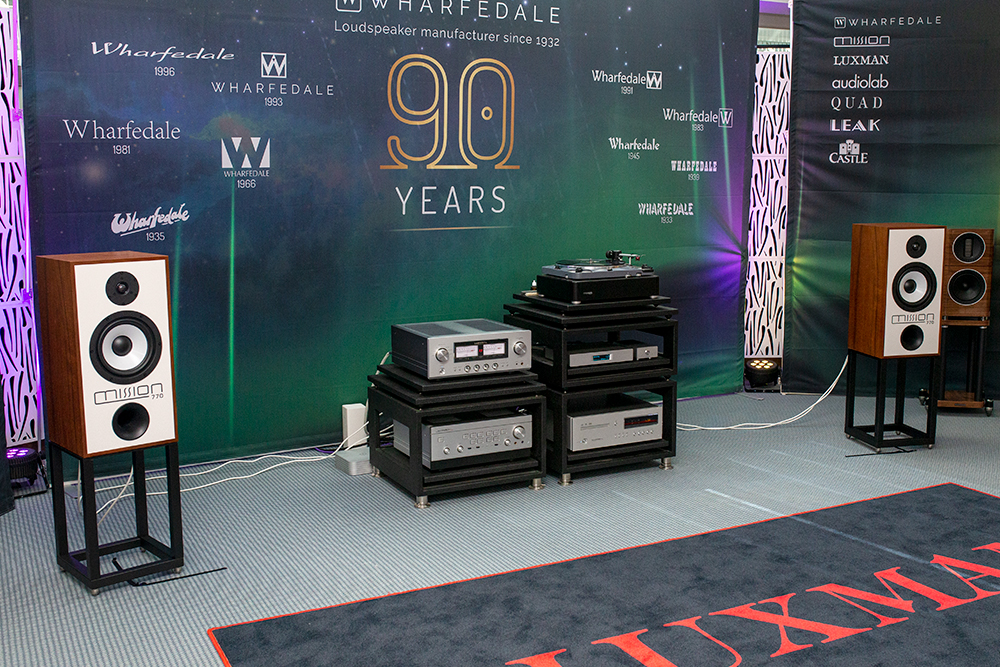 Finally, I’ll finish off with a new loudspeaker from Mission—the 700 (see below)—which can be thought of as a smaller sibling to the company’s 770, which was released late last year and can be seen above. The 770 seems to be a huge success because it’s in short supply (we’ve been waiting for a review pair). Both the 770 and the 700 are effectively reboots of the 1970s models that carried the same names. But those designs were created by Mission founder Farad Azima, while the new 770 and forthcoming 700 come from speaker engineer Peter Comeau. 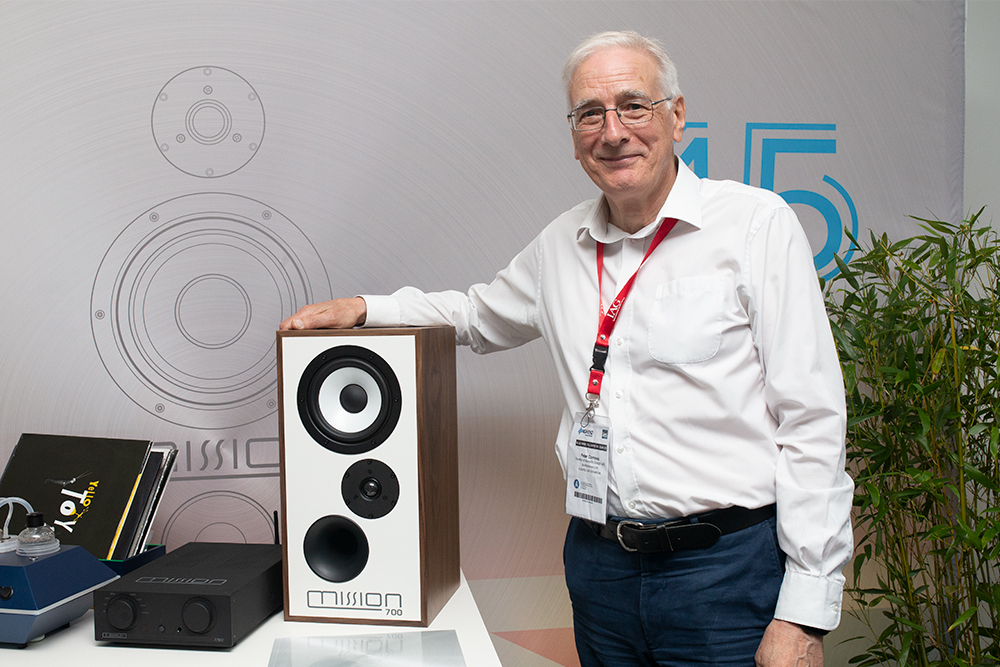 Unfortunately, that’s about all I can tell you about the 700 because the design isn’t quite finished yet. It’s also not priced, and Comeau wouldn’t tell me much more about it, other than revealing that the tweeter is offset the way it is because that’s what they did in the original due to the placements of the midrange-woofer and port tube. But I can tell you that I had a fascinating 20-minute conversation with Comeau about loudspeaker measurements and how they pertain to what we hear. I’ll cut to the chase and say that he feels like I do, which is that loudspeaker measurements have tremendous value. In fact, he’s looking forward to our measurements of the 770 when I get the pair. But he also feels that people who think they can determine how a speaker sounds only from the measurements are misleading themselves, which is the way I feel, too. He went on to tell me that, because listening is so vital, he and his team went through 174 crossover revisions before they landed on the sound that brought the “magic” of the original 770 design into the new version.