It seemed like this year the Montreal Audio Fest had more than its usual quota of new speaker introductions. They were everywhere. Here’s a bunch more, with all prices in Canadian dollars unless indicated otherwise. 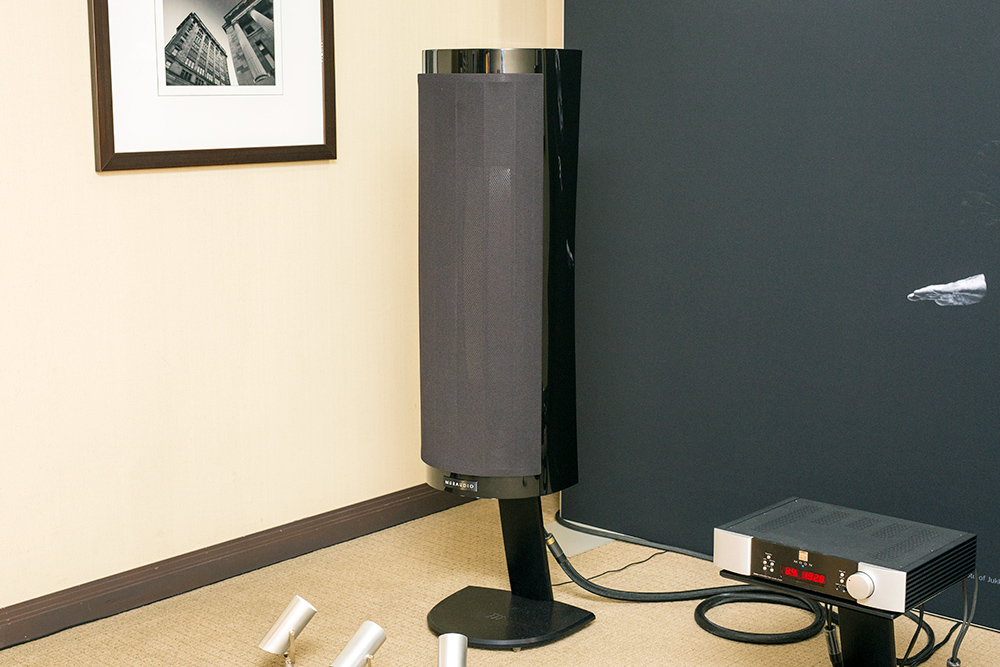 Although it’s not really the case, some people think that anyone can build a box speaker. Table saw? Check. Router? Check. Wood glue? Got it. Now cut some holes and jam in some drivers. Oh, and you might need a crossover.

But an electrostat? Not so much. Those things are tricky, with high voltage and stuff. That shit can kill you dead.

So it’s exceptionally rare when a new electrostat comes to town. Muraudio burst onto the audio scene fully formed a few years back with a statement-level electrostatic-based speaker called Domain Onmi PX1. It had three proprietary electrostatic panels, radiating over 360 degrees, crossed over to three dynamic woofers arranged in a triangular configuration, also radiating spherically. And now here they are again, debuting yet another new speaker, the SP1, which, at $14,700 USD per pair, is a far, far less expensive affair than the company’s big Domain Omni series, which was four times that.

The SP1 is a single-panel (hence the name) electrostatic speaker employing Muraudio’s signature panel, which is curved on both the vertical and horizontal axis. It operates in a dipole fashion from about 700Hz and up. Reinforcing the lower frequencies are four 6" drivers -- two at the top of the panel, the other two at the bottom, all sunk in and angled outward a bit. The demo pair was finished in an extremely high-quality black-gloss lacquer, and with their integrated stands and grilles on, they cut a dashing figure. Off to the side . . . 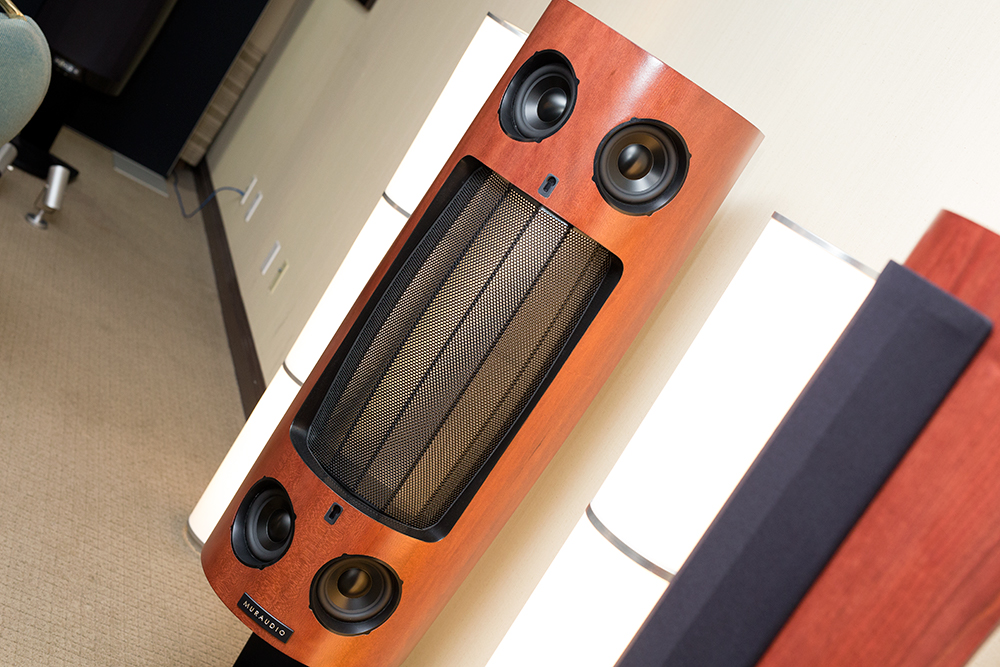 . . . of the room were another pair clad in cherrywood veneer. That said, these are fairly large speakers, and I much preferred the look in black gloss lacquer. 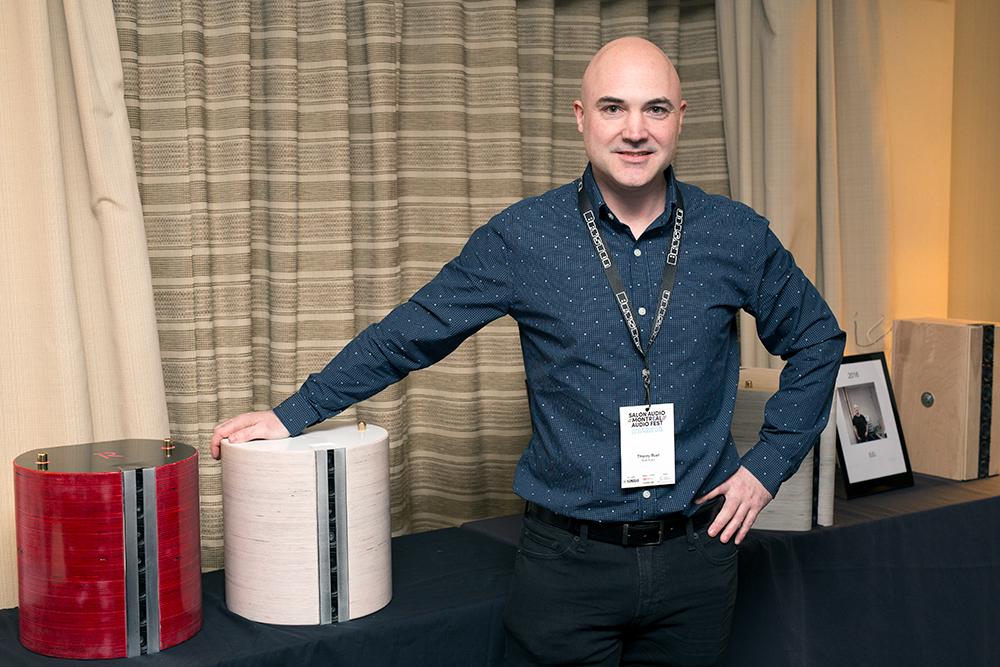 Here we see Thierry Ruel standing next to the prototype of a single module that’s part of Ruel’s first product, the R+, which coheres into that rarest of speakers -- a true line source. There’s a fair amount of utterly out-of-the-box thinking involved in the R+. First off, this speaker is made in “blocks,” almost a foot high, each built up from many layers of Baltic birch plywood and with a vertical run of seven one-and-a-half-inch drivers on one side. That’s one and a half inches, as in 1.5". Tiny little drivers, all lined up close together.

Now you’d be forgiven for thinking that this is up for an award as the most ludicrous idea of all time. How could such a small driver -- even a bunch of them -- do anything other than squeak out high frequencies? What about the midrange? What about bass? 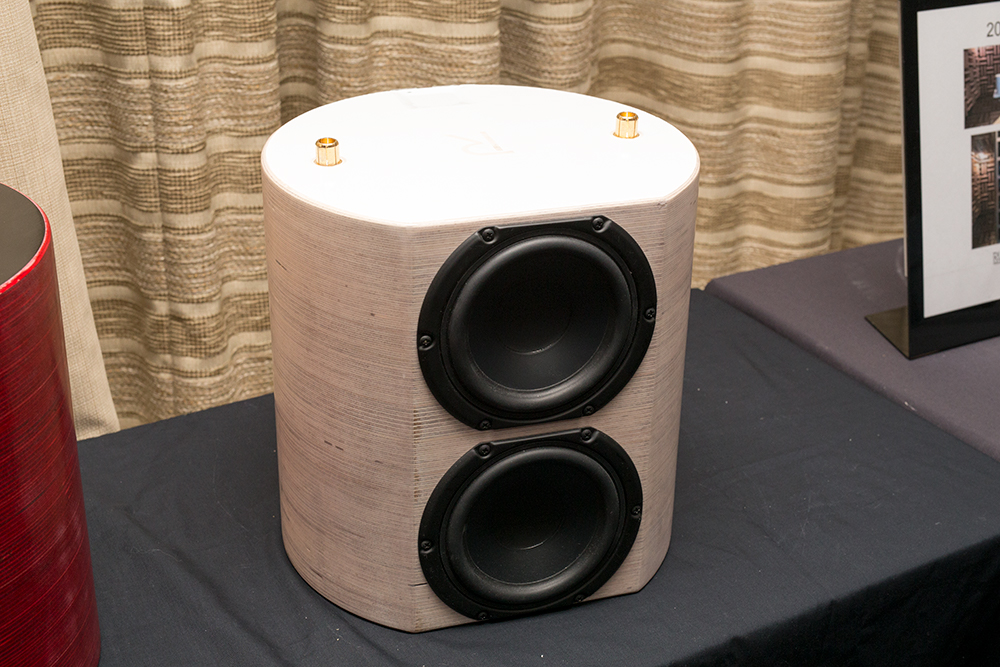 Glad you asked, because ’round back there are two passive radiators that looked to be 4" across. Via some DSP trickery built into the control unit (below), those 1.5" drivers chug out enough low frequencies to push good, ripe bass out the back via these passive radiators. 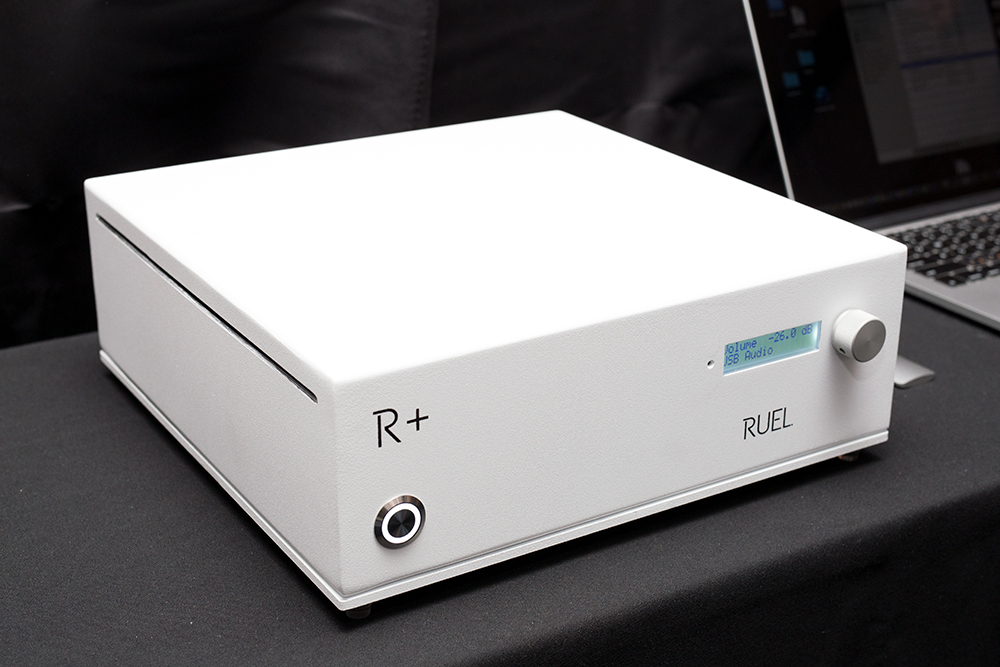 Along with left and right speakers, the control unit fleshed out the R+ system. The control unit contains two 1000W class-D amplifiers, a digital-to-analog converter, and the DSP smarts required by the system. 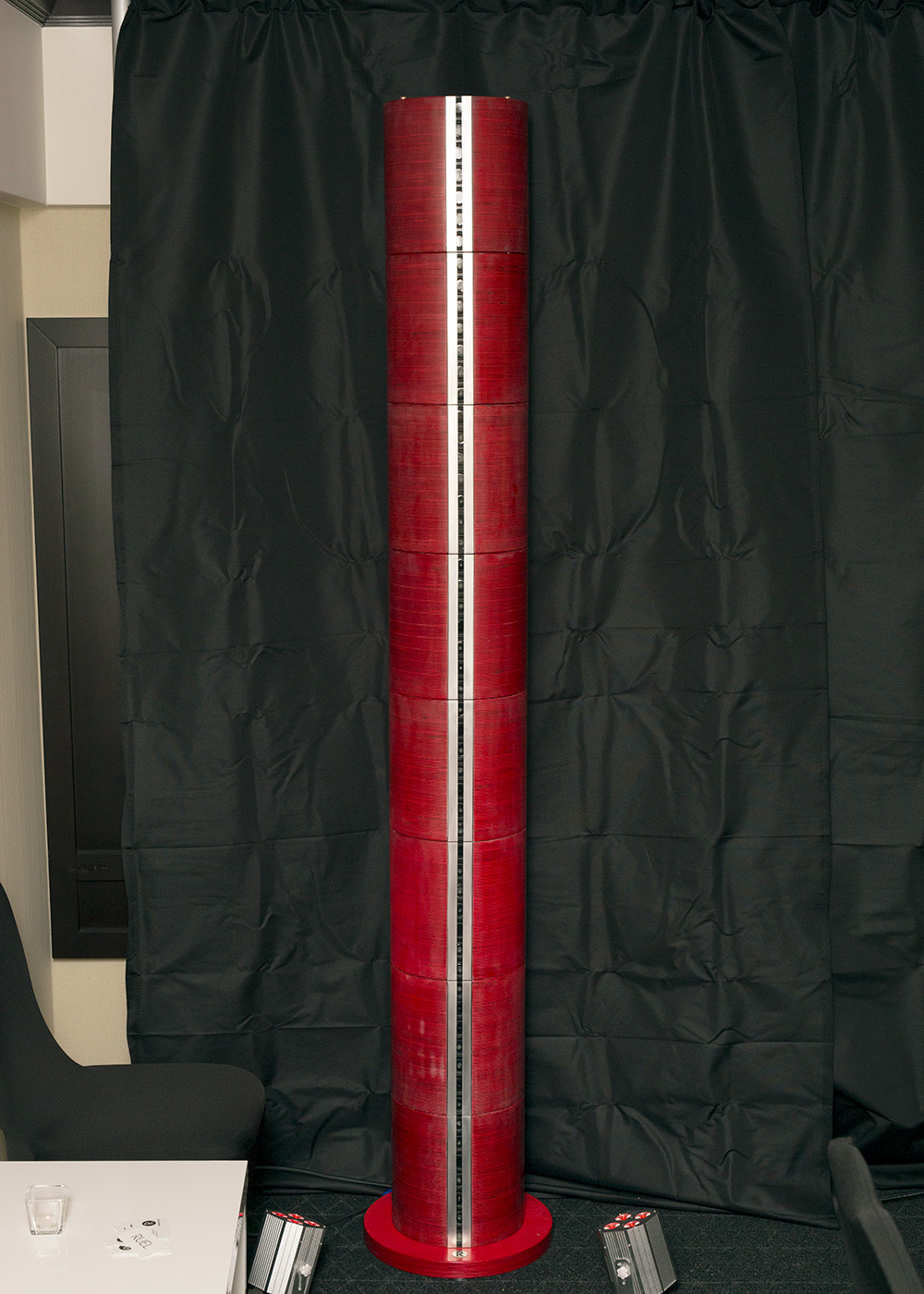 To run a true line-source speaker, the cabinet should reach from floor to ceiling, and the R+ accommodates. A standard R+ system is priced at $39,000 and is composed of eight speaker “blocks” per side, which will work for a typical room -- but another block or two can be added to accommodate 9' and 10' ceilings.

It all comes together in a system that sounded far, far better than a system composed almost entirely of 1.5" drivers had any right to do. Deep, rich bass, and a relaxed but extended treble accompanied by a sense of scale that made the floor-to-ceiling construction of the R+ seem like it was worth the significant engineering and manufacturing challenges that this design undoubtedly presented. 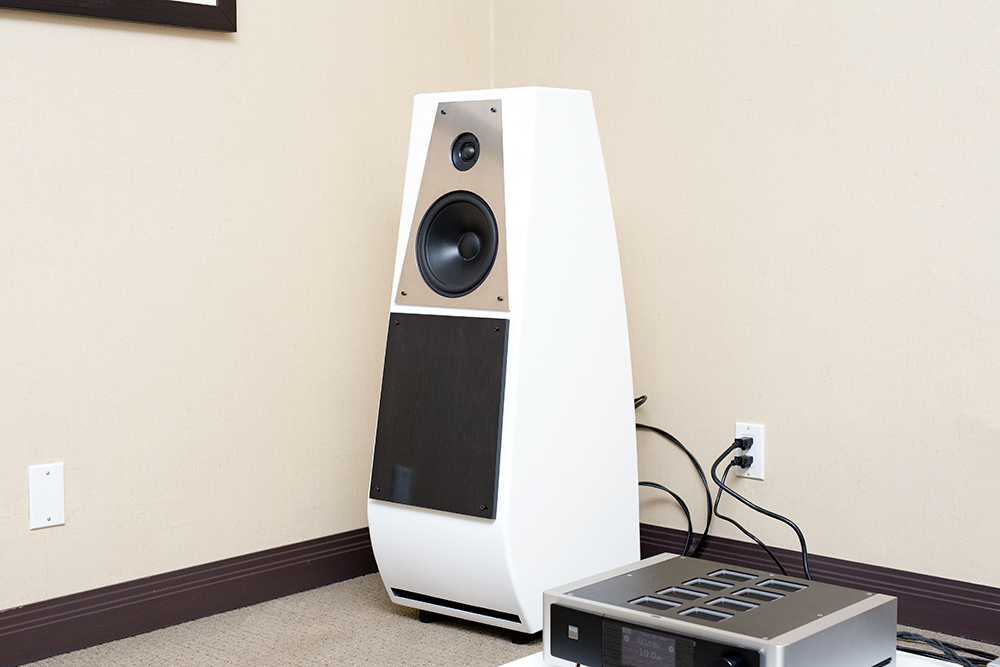 Tetra, based out of Ottawa, Ontario, the nation’s capital, had what seems like an ambitious new speaker playing in its room. I say “seems like,” as there’s not that much I can tell you about it other than its physical dimensions. According to the company’s president, Adrian Butts, there are numerous proprietary technologies -- some with patents pending -- inside the Phoenix, so no more details were available.

The $12,750-per-pair (that’s a show special price) Phoenix is a two-way design with a 1" tweeter and 8" midrange-woofer. Finishes are customizable to the customer’s tastes, and the demo pair was, overall, reasonable looking, albeit with an odd panel over the lower front that looked suspiciously like it was covering a hole where a larger woofer perhaps used to reside. 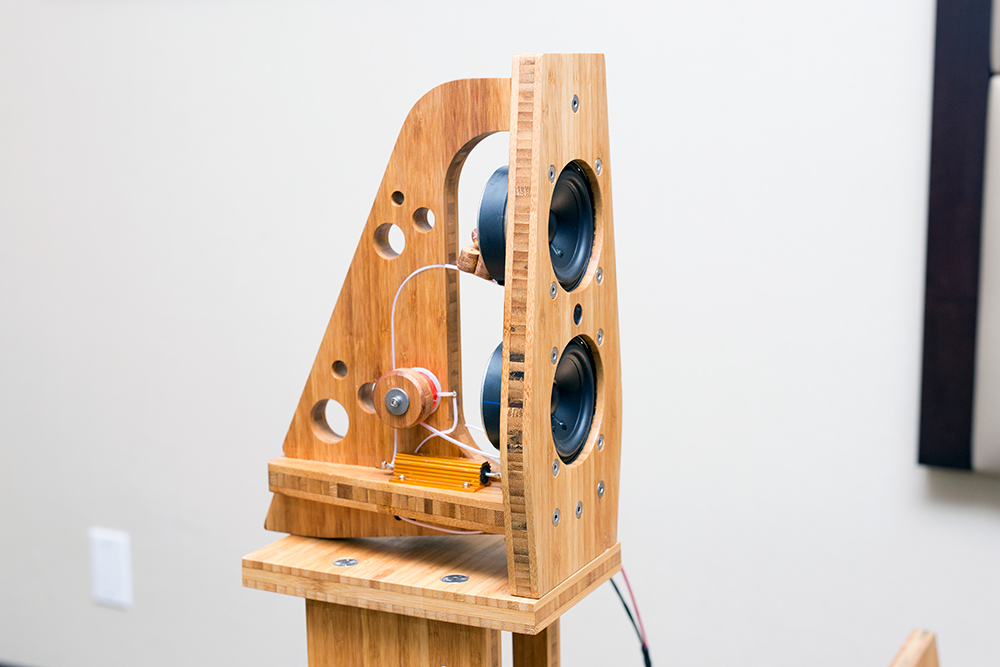 It’s always a treat to visit the Tri-Art room. This company, based out of Kingston, Ontario, makes new product coverage easy for us, as it’s always innovating and building interesting confections from bamboo composite.

The diminutive S-series Desktop Open speakers are -- as the name suggests -- an open-baffle design with two 3" drivers. The S-series Desktop Open is priced at $805 per pair and is a one-and-a-half-way design -- the topmost driver runs wide open, but the bottom one only works below 250Hz -- which is claimed to reach down to 118Hz. Tri-Art had these little guys matched with a pair of . . . 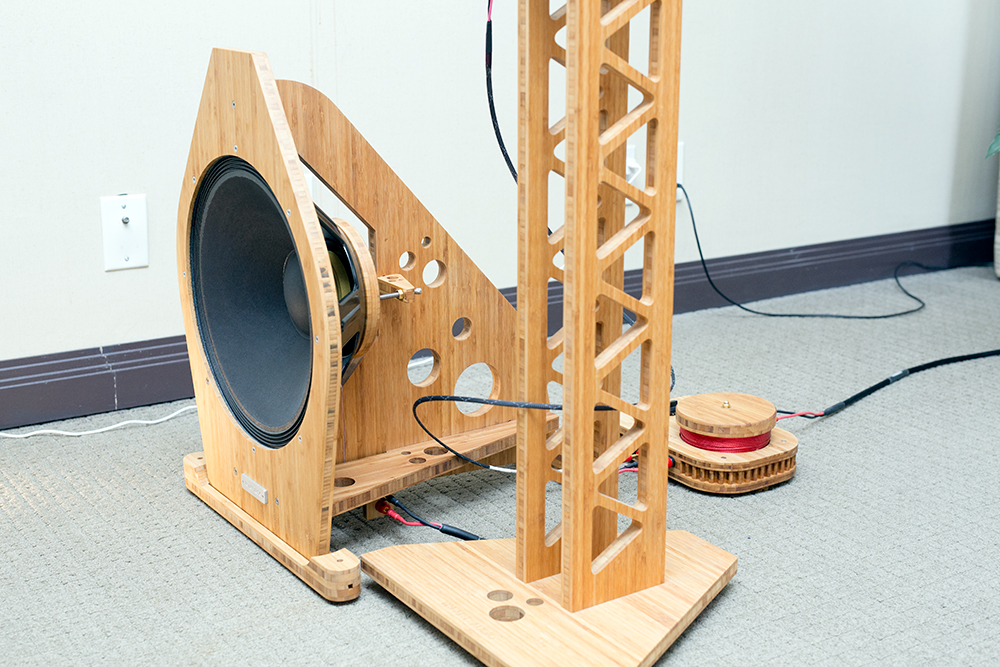