Loudspeakers are the easiest for me to cover for three reasons: they’re typically the most obvious things when you enter a room, I keep abreast of the market and usually know right off the bat what’s new and what’s not, and I’m really into speaker design and always keen to learn what might be new. As a result, the moment I got to the Hotel Bonaventure, the home of Montréal Audio Fest 2019, I started looking at loudspeakers and little else. Below are the first speakers I found, with all prices in Canadian dollars unless otherwise noted. 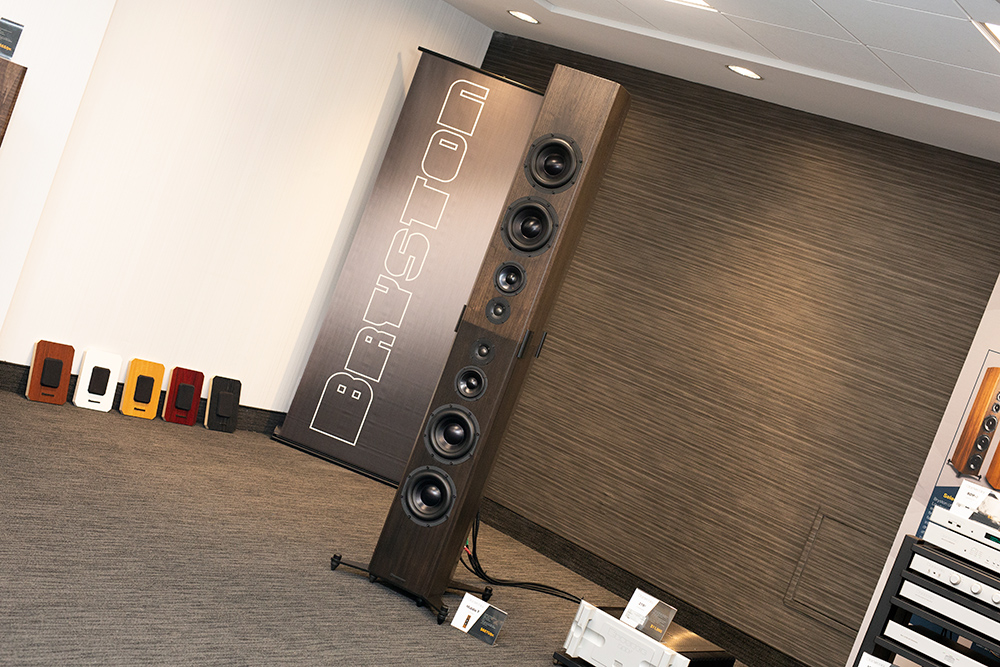 Bryston, the well-known Canadian brand that used to make only amplifiers and preamplifiers, nowadays also offers digital components, power conditioners, cables, a turntable, and a wide-ranging assortment of speakers. They were quick to point out to me that the Middle T-Rex loudspeaker shown here isn’t brand-spanking new -- it was introduced in 2018 -- but this is the first time the company put it on display at a show. Each Middle T-Rex speaker comprises two Middle T loudspeakers, stacked one on top of another, with the bottom one having its tweeter end up, the top one with it down, then secured with brackets that are on the sides and rear. Each Middle T has a 1" tweeter, a 5.25" midrange, and two 8" woofers. The tweeter-midrange crossover point is at 2.3kHz, while the crossover point between the midrange and woofers is at 160Hz. The passive version of the Middle T-Rex costs $13,740 per pair, or a customer can start with a pair of Middle Ts for half that ($6870/pair) and then move up to the T-Rex version in the future by adding another pair. The passive Middle T and Middle T-Rex speaker need only a single channel of power for each speaker, so a stereo amp or two mono amps will do. However, in Montreal the full Middle T-Rex Active system was on display. This system adds the Bryston BAX-1 DSP active crossover ($3495), as well as three channels of amplification per side -- one for the tweeter, one for the midrange, and one for the woofers -- which is why, in Montreal, the company used two 21B3 three-channel amplifiers ($11,995 each) to power the pair of Middle T-Rex speakers. Finally, about the color discrepancy between the top and bottom cabinets in the photo above: the lower one has Bryston’s original Espresso finish, which many people found too dark. The top is the new and final Espresso finish, which is not only lighter but also shows the real-wood-veneer grain more. 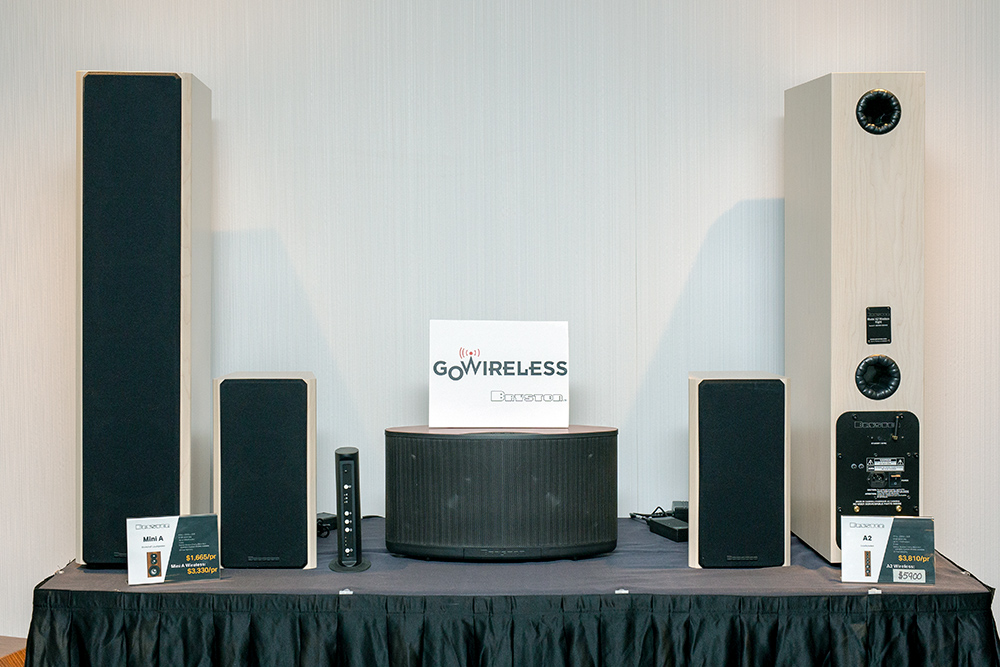 Bryston’s speaker lineup is so vast today that the company now offers wireless, fully powered speaker products as well. Smack in the center of the photo above is the BryFi 2 all-in-one speaker system ($1495), which incorporates two three-way speakers, replete with built-in amplification, streaming capability, and digital and analog inputs. To each side of the BryFi 2 are Mini A Wireless bookshelf speakers, priced at $3330 for the pair (a passive version, the Mini A, is $1665 per pair). On the outsides of the Mini A Wirelesses are the A2 Wireless floorstanders, which are $5900 for the pair (the passive version, the A2, is $3810 per pair). Unlike the BryFi 2, which has all its streaming “smarts” built in, both the Mini A Wireless and A2 Wireless have only their amplification and crossovers built in; they both rely on a wireless base station, which can be seen between the BryFi 2 and the Mini A Wireless on the left, as well as in . . . 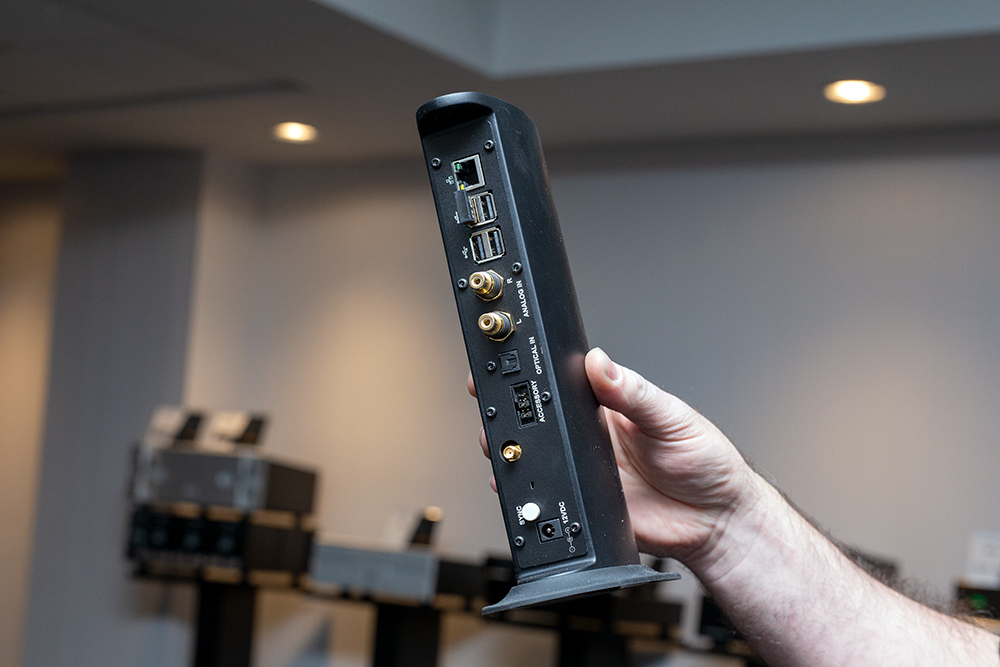 . . . this photo. Besides Bluetooth and Wi-Fi capability, the base station has optical (TosLink), Ethernet, and USB digital inputs, as well as a pair of single-ended RCA analog inputs. It connects wirelessly to the two speakers. This way, you can wire sources directly into the system, or stream from your phone, tablet, computer, or network. Unlike wireless speaker systems that have a master and a slave speaker, usually connected with a cable . . . 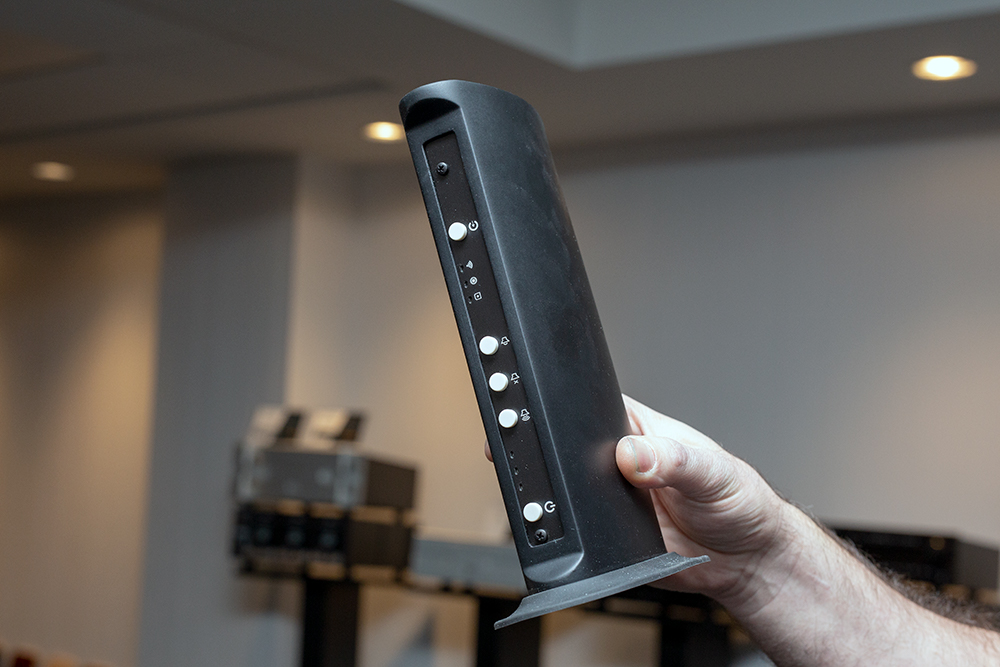 . . . the Bryston wireless base station directly addresses each speaker in a stereo pair. 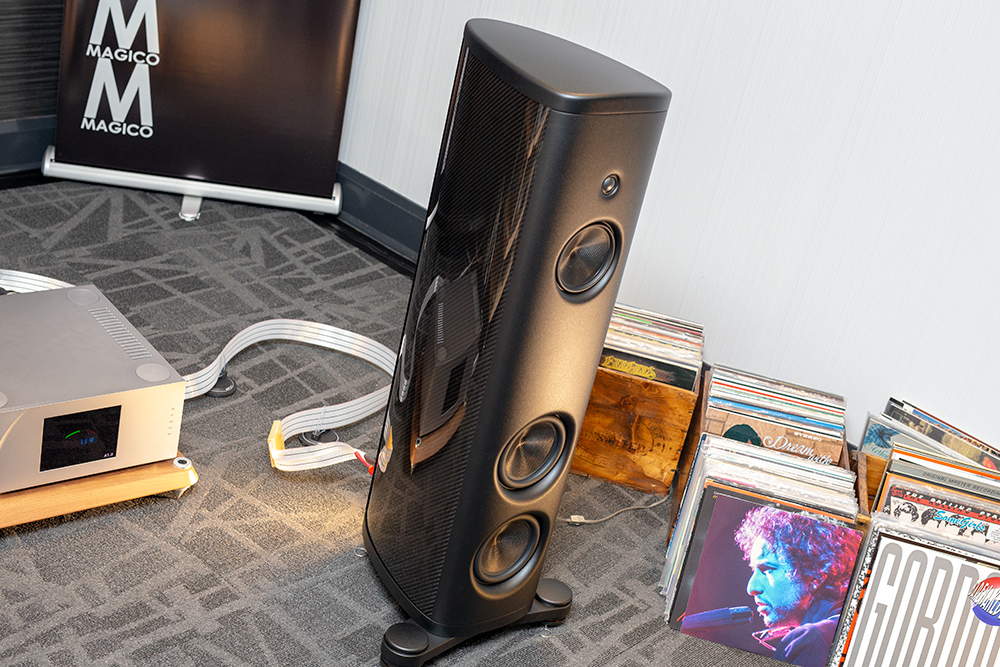 Magico’s M2 was announced a couple of months ago, but Montréal Audio Fest 2019 marked the first public demonstration of it anywhere, courtesy of Canadian dealer Audio by Mark Jones. The M2 is really a smaller, less-expensive descendant of Magico’s M6 loudspeaker, a statement-type design that’ll set you back at least $200,000 per pair in Canada. While still not cheap, the M2 is only $84,600 per pair in Canada, with the optional stands (in the US, the price is $56,000 per pair without the stands, $63,600 per pair with them). The M2 is a three-way design with a 1.1" diamond-coated beryllium-dome tweeter, a 6" graphene-layered carbon-fiber midrange driver, and two 7" graphene-layered carbon-fiber woofers. Sensitivity is said to be 88dB (1W/m), while the impedance is rated at 4 ohms. Probably the most impressive thing about the M2, and the M6, is the cabinet -- a monocoque carbon-fiber-based enclosure that’s curved to minimize internal standing waves and external diffraction, and supplemented by beautifully constructed aluminum portions on the front, rear, top, and bottom. Although there was some “room boom” due to the somewhat resonant Hotel Bonaventure walls, the M2s, driven by CH Precision electronics, and with a Vertere RG-1 turntable and Nordost cables throughout, sounded extraordinarily detailed yet unfatiguing overall. 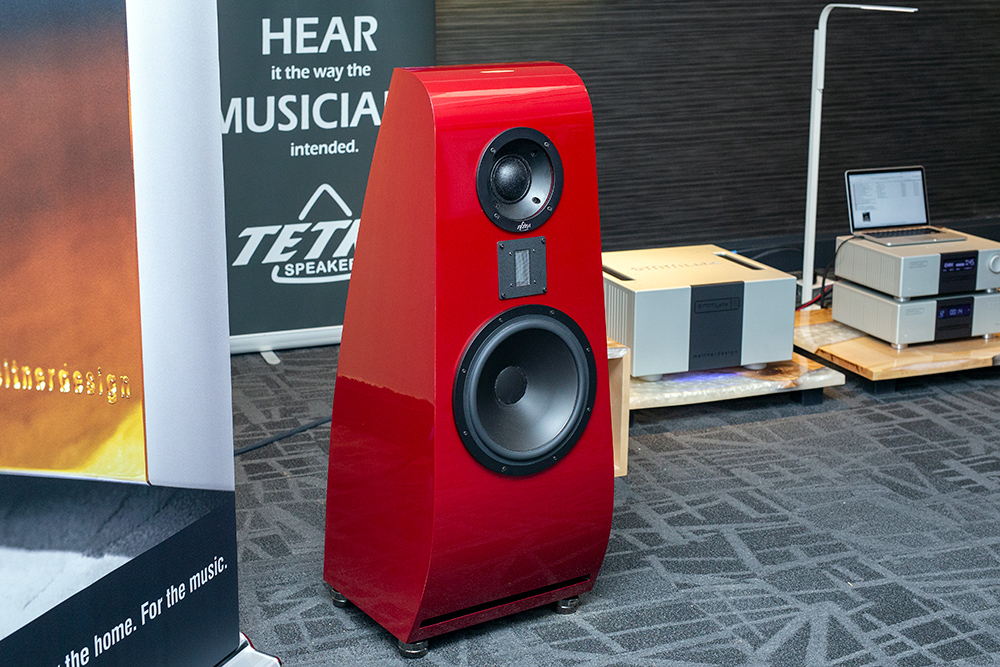 The Magico M2 certainly wasn’t the only expensive, small floorstanding speaker in Montreal. Tetra Speakers, which hails from Canada’s capital, Ottawa, was showing its Phoenix 707 loudspeaker, priced at $78,000/pr. in Canada and the US. The Phoenix features a 10" woofer, a 4" dome midrange, and a ribbon tweeter that looked about 3" high. The curved cabinet is made entirely of MDF, with the entire speaker said to weigh 120 pounds. According to Adrian Butts, Tetra’s founder and chief designer, the crossover was designed “totally by ear,” and is a balanced configuration. He said that the Phoenix 707 has a sensitivity spec of 93dB, which not only seems awfully high but would also mean the EMM Labs MTRX2 mono amps driving them were barely working at all -- they’re capable of 500W each into 8 ohms, doubling in power output into 4 ohms. In any event, fellow SoundStager Jason Thorpe and I thought the sound was pretty good. 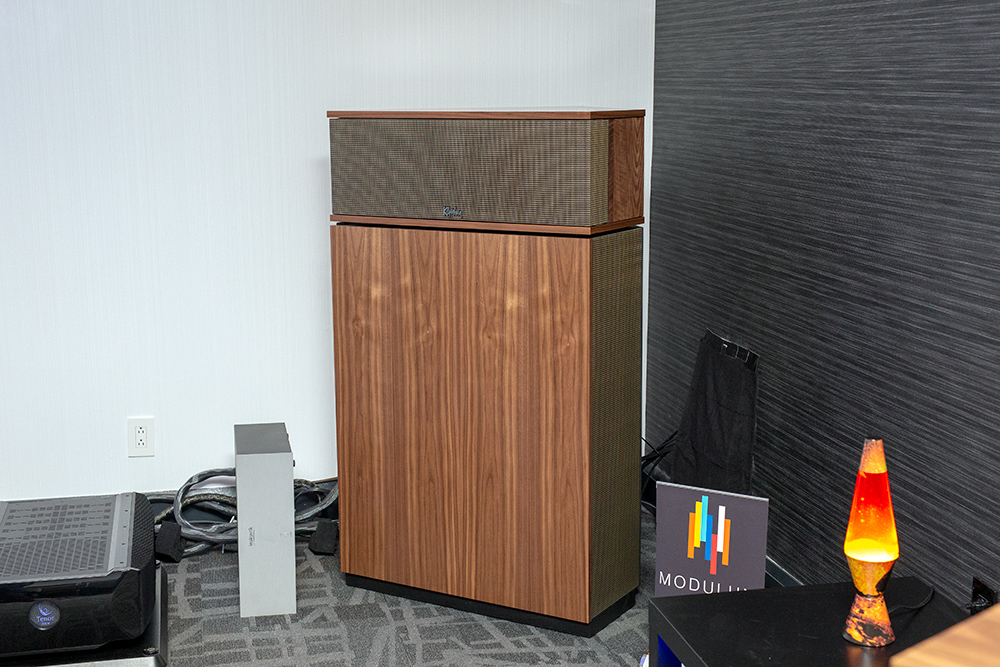 In February, at the Florida Audio Expo, I highlighted new versions of legendary speakers -- the Falcon Acoustics LS3/5a, which faithfully re-creates the original BBC LS3/5a design, and the JBL L100 Classic, which updates the ’70s-era JBL L100 with modern engineering. In Montreal I saw the Klipschhorn AK6, priced at $25,999 per pair, which, like the L100 Classic, updates a classic design with contemporary engineering and aesthetic tweaks. But this model marks a big change from the original, which debuted in 1946. That initial design needed to be butted tight into corners to get the bass right -- the low notes are produced by an internal woofer, but channeled through a clever “folded” horn that is part and parcel with the cabinet. The new model has been designed so it doesn’t need to be tight against the wall. According to a press release on the new AK6, it features a fully enclosed low-frequency horn cabinet, offering more placement versatility in the listening room, as the enclosure itself functions as a corner, delivering powerful bass performance and improved imaging. A 1" titanium tweeter mounted in a 90° x 40° Tractrix horn extends the output of high frequencies beyond 20kHz. An updated passive network features premium-grade AudioQuest internal wiring. AK6 designer . . . 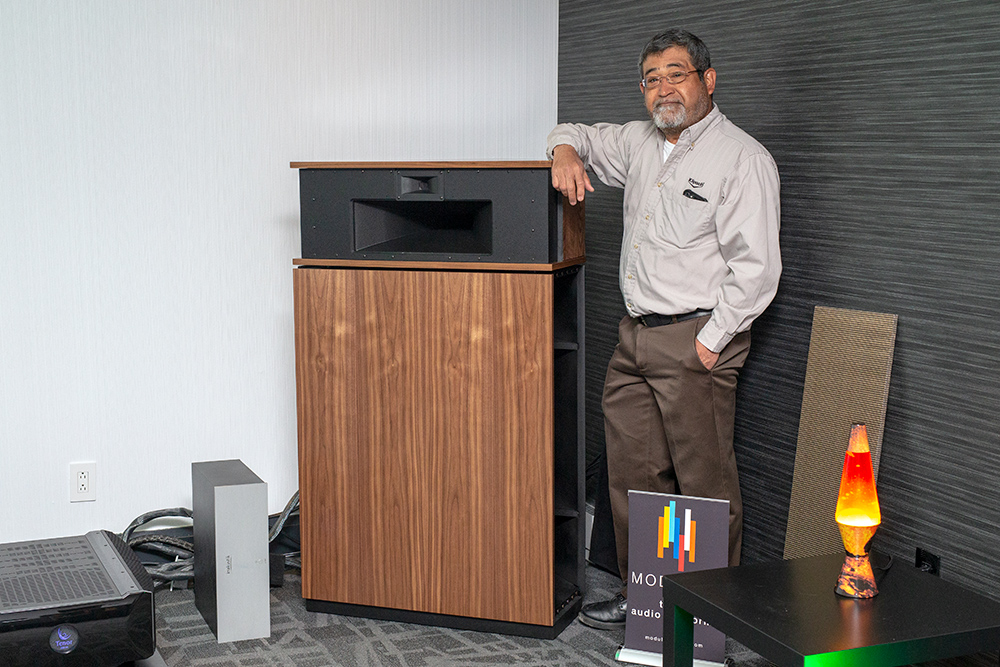 . . . Roy Delgado began with Klipsch in 1986 and worked with founder Paul Klipsch, who was born in 1904 and died in 2002. Roy was in Montreal, and he was happy to pull off the grilles to show us the woofer vents as well as the horn-loaded tweeter and midrange drivers. Using these horns allows sky-high sensitivity: 105dB (1W/m). Delgado also told me that the changes he was able to put into the AK6 are what Paul Klipsch wanted, but was unable to implement. If you ask me, Klipsch’s decision to update this legendary speaker with modern design techniques was brilliant.