I’m always on the lookout for interesting companies to tour when I visit Japan. On this last trip in January, I thought it would be informative to check out Asahi Kasei Microdevices (AKM), maker of, among other things, digital-to-analog converter (DAC) chips. AKM doesn’t sell directly to audiophiles, but rather to many audio manufacturers who incorporate the company’s products into their components. However, despite AKM’s industry-wide reach, it’s known only vaguely, if at all, to most audiophiles. As it turns out, I had no idea just how interesting my visit would be. 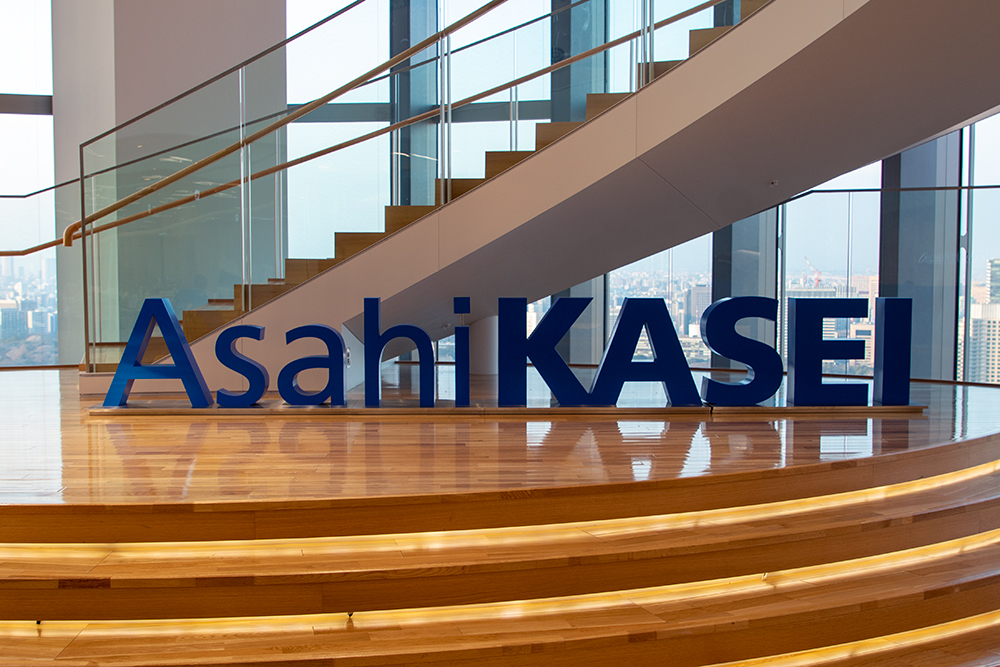 AKM is a subdivision of Asahi Kasei Corporation, a Japan-based global conglomerate. Prior to my visit, I had no contacts at either the parent company or the subsidiary, but I knew that Esoteric uses AKM’s DAC chips in some of its products. I thus e-mailed Hiroyuki Machida, head of Esoteric’s product planning group, who put me in touch with Gaku Suzuki, a manager in AKM’s marketing department. January 15 was the date set for my visit to AKM’s headquarters in Tokyo’s Hibiya Mitsui Tower, located in the prefecture’s tony Ginza district, known for its theaters and boutique retail shops.

Completed in 2018, Hibiya Mitsui Tower is about as ultra-modern and minimalist a building as I’ve seen. Entering the Tower’s large, busy lobby, I felt like I’d landed on the set of a futuristic Japanese sci-fi movie. From the lobby, I was directed up to Asahi Kasei’s multi-story reception space with its breathtaking Tokyo views. There, I began snapping photos of the area, including the nearby Tokyo Imperial Palace, whose beautiful and impeccably kept grounds are mostly hidden from public view at ground level. Suzuki almost instantly greeted me before escorting me to a conference room on another floor. 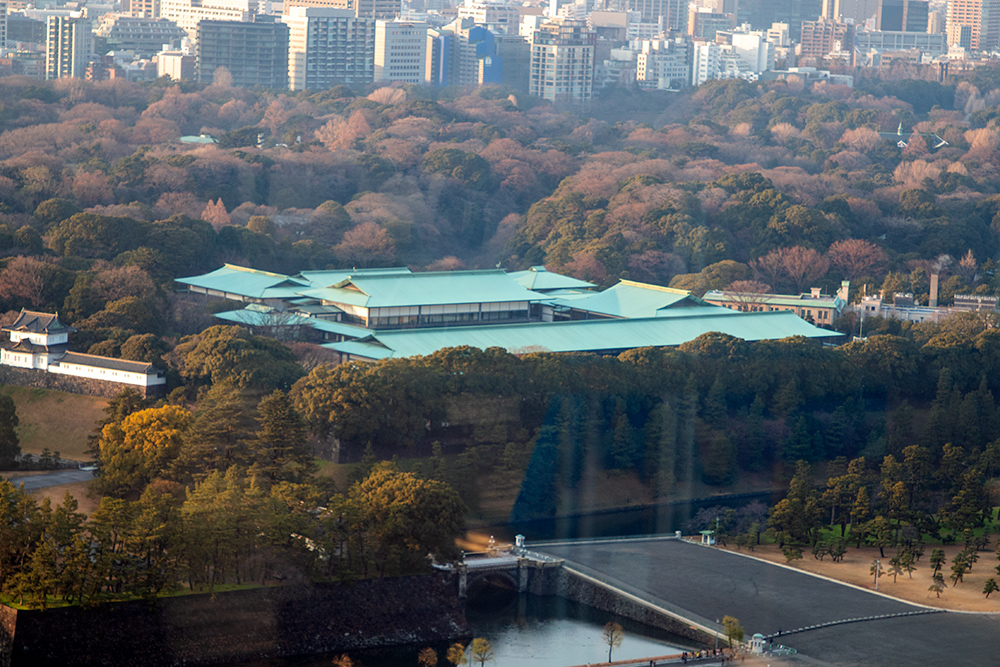 When we arrived at the conference room, Suzuki introduced me to Akihiro Ikehara, the group manager of AKM’s hi-fi/premium-audio products; Takashi Kotaki, an audio quality expert; and Mitsuru Aniya, a senior audio technology expert. After introductions and some small talk, the team walked me through a PowerPoint presentation that they had prepared for my visit. What I learned was fascinating. 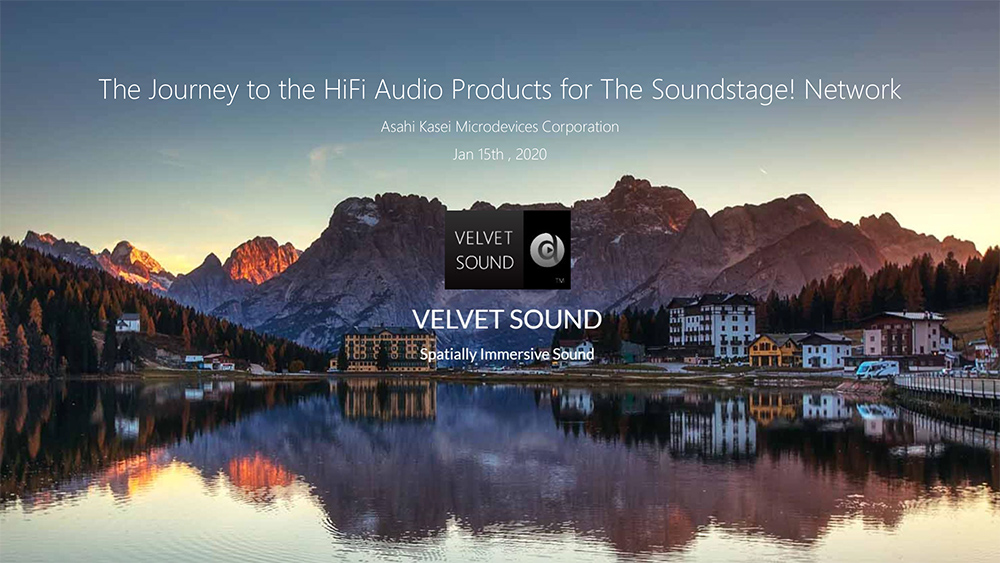 The first slide of the PowerPoint presentation

Established in 1931, Asahi Kasei owns and operates a large number of diversified subsidiaries in the home, construction materials, textile, chemical, medical, pharmaceutical, and electronics industries. It has almost 40,000 employees worldwide and annual net sales of approximately $24 billion. The products made by Asahi Kasei’s subsidiaries are much too numerous and diverse to list here. In fact, they seem endless. However, a few examples include industrial solvents, textiles, home thermal insulation, advanced medical devices, prescription medications, electronic speech recognition and navigational systems, complex automobile parts, and hospital and emergency responder data-management systems. Asahi Kasei’s operations touch virtually every aspect of human life not only in Japan but in many countries worldwide. 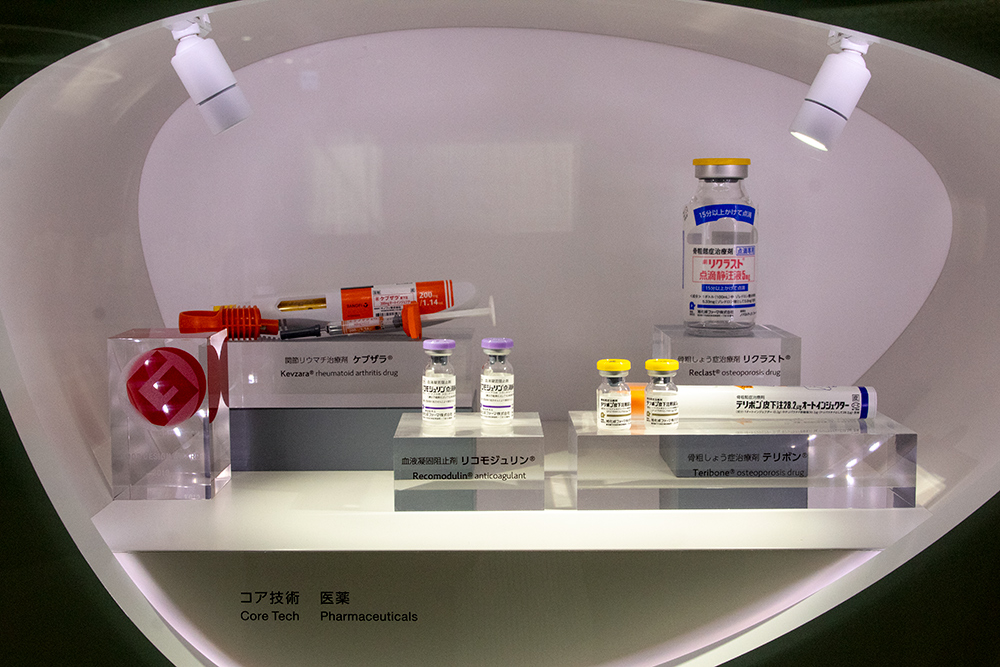 Some of Asahi Kasei’s products 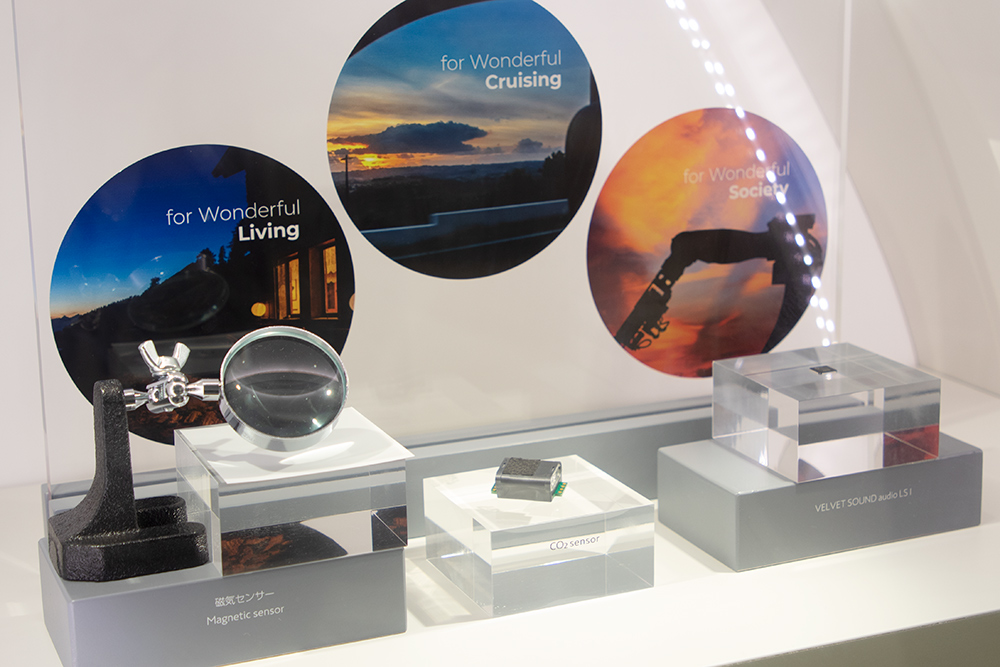 Some of AKM’s products

AKM’s audio products fall into three categories -- automotive, home/professional studio and broadcast, and portable. Although AKM’s audio products include such things as codecs, sample rate converters, audio and voice processors, digital interfaces (transmitters, receivers, and transceivers), and radio tuners, the division is perhaps best known among audiophiles for its digital-to-analog converter and analog-to-digital converter (ADC) chips, both of which AKM first began producing in the late 1980s.

AKM’s current generation of digital conversion chips, both stereo and multichannel, aim to achieve what the company calls Velvet Sound. According to AKM marketing literature, this sound “maximize[s] dynamics and ensure[s] pure, unaltered audio data, prioritizing the accurate capture and reproduction of the source material in order to achieve high performance and musicality.” AKM’s ambassador for the Velvet Sound concept is Japanese violinist Daishin Kashimoto, the Berlin Philharmonic’s lead violinist, who also holds the distinction of being the orchestra’s first concertmaster. 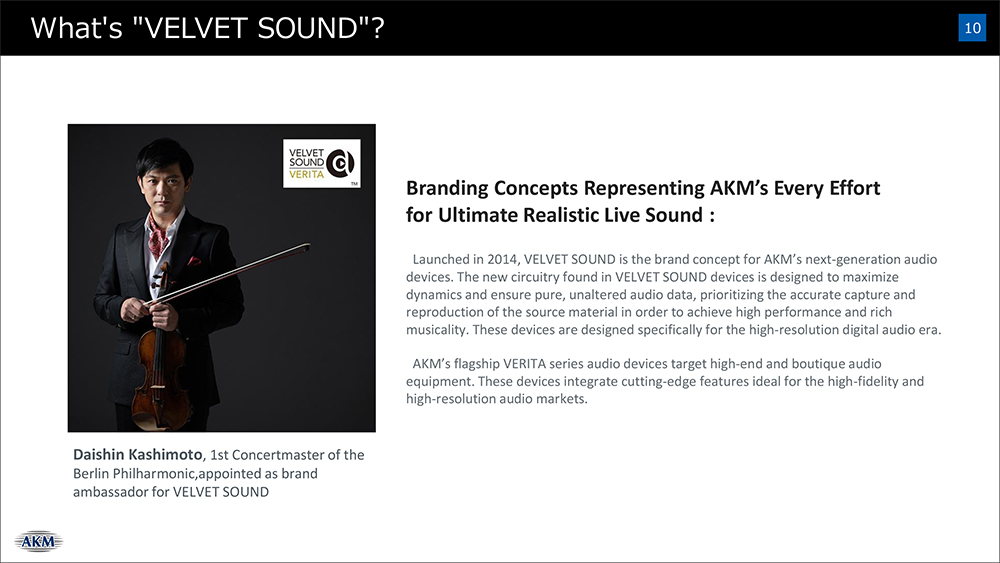 AKM has three chip series it calls Mid-range, Hi-end, and Flagship. An example of the latter is AKM’s highest-performing DAC chip, the 32-bit Verita AK4499, introduced in May of 2019 to replace the prior flagship chip, the Verita AK4497. The AK4499 accepts inputs of up to 768kHz PCM and DSD512 (aka Octa DSD), the latter of which has a sample rate of 22.5792MHz, or 512 times that of a Red Book CD. Also, the AK4499 features six different digital filters. 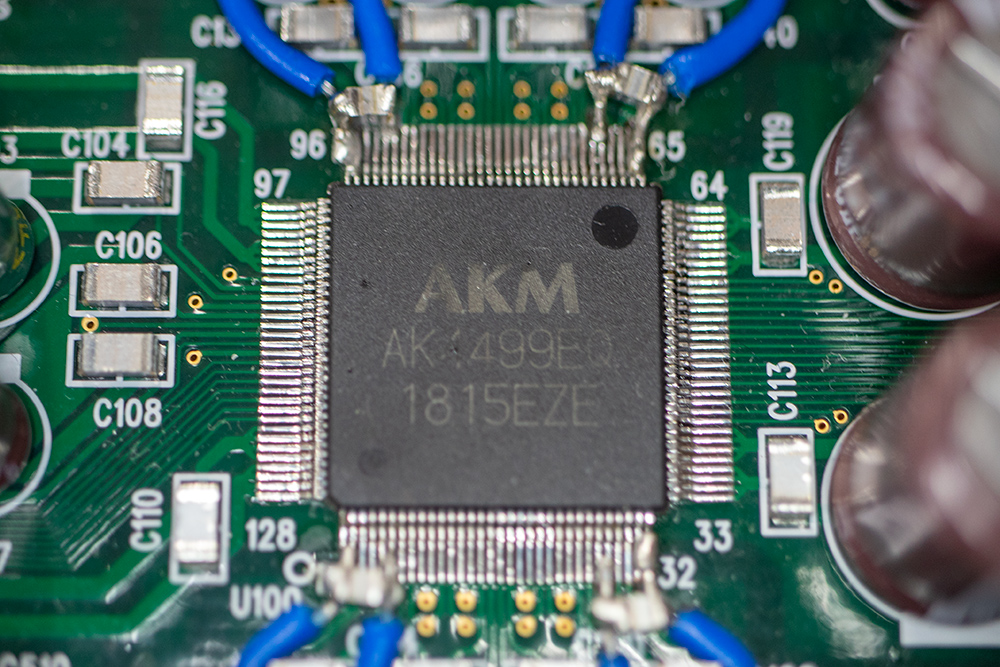 AKM’s past and present customers are too numerous to fully list. But to name a few of the audio-related ones, they include Astell&Kern, Aurender, Denon, Emotiva, Esoteric, Hegel Music Systems, Kenwood, Linn, Marantz, Pioneer, Sony, Tascam, TEAC, Technics, and Yamaha.

The listening room and a really interesting demo

At the conclusion of the PowerPoint presentation, we headed to AKM’s listening room, where all new audio products are performance tested. Outfitted with acoustic treatments, the room contained components from companies such as Esoteric, Linn, Korg, and Denon. But here’s the really cool thing -- in the listening room were two specially made AKM demo DAC components. One contained the new Verita AK4499 chip, while the other was equipped with the company’s older Verita AK4497 chip, released in 2016. Other than the chips, all of the parts in these demo DACs, including the power supplies, internal wiring, connectors, and chassis, were identical to each other. In fact, AKM takes these and similar demo components to manufacturers’ listening rooms to demonstrate its products. 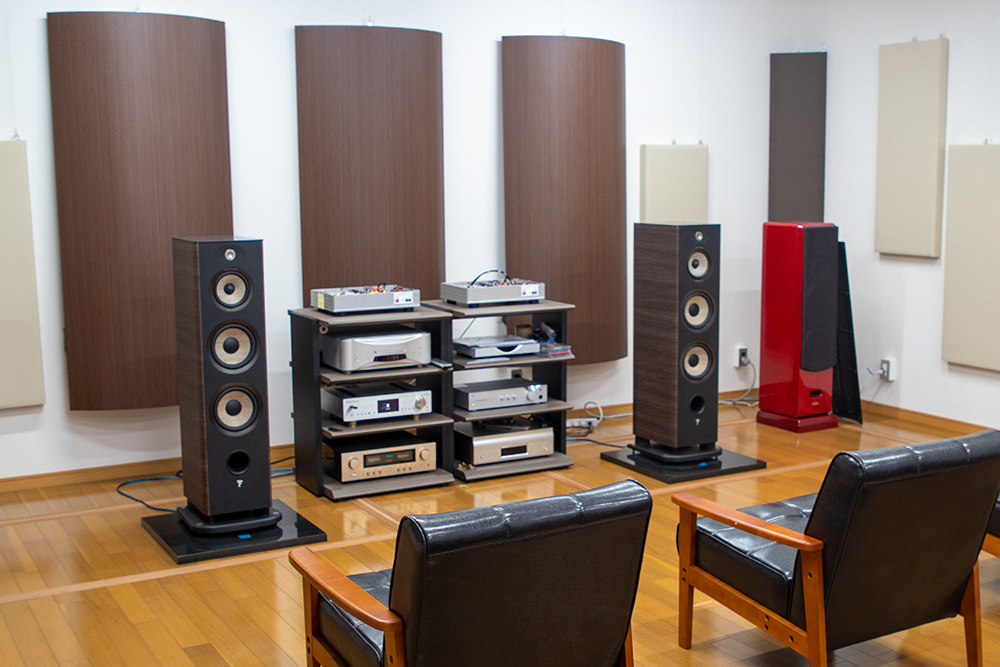 For our listening session, a digital audio signal was alternately inputted from a Cambridge Audio Azur 851N network player to one of the two AKM demo DACs, and the converted analog signal was passed on to an Accuphase E-270 integrated amplifier and ultimately to a pair of Focal Aria 948 speakers.

We first listened to the AK4499 demo DAC on everything from the Eagles’ “Hotel California” to several tracks from Camille Saint-Saens’s “Le carnaval des animaux” suite. The sound was incredibly transparent, detailed, clear, and crisp, and had powerful bass. Moving to the AK4497 demo DAC, the sound was still very good, but I could immediately tell there was greater transparency, transient edge, and harmonic richness with the DAC outfitted with the AK4499 chip. For example, on “Hotel California,” the opening kick drum with the AK4499 demo DAC was larger in scale and more dimensional than the other. The AK4499 demo DAC also brought more heft and detail to the table. All in all, the presentation of the component with the current flagship AK4499 chip was much more ear-opening and engaging. 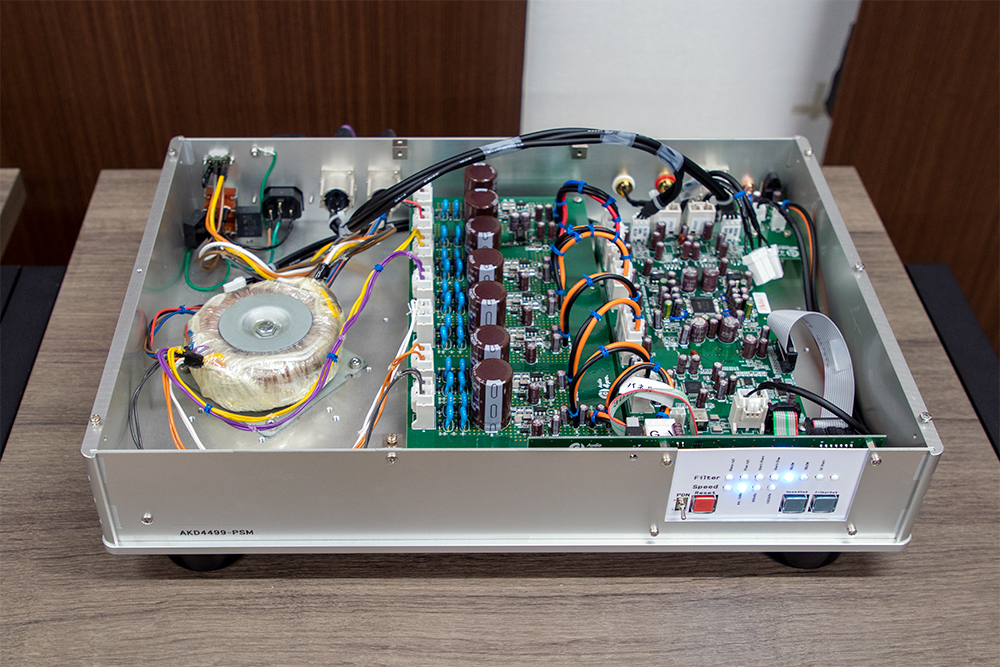 The demo got me thinking about just how important the converter chips are to a DAC. While that seems to be fairly obvious, it’s not something that you can fully appreciate until you experience a demo like this one.

My visit to AKM wasn’t just highly informative; it also proved that in audio, as in life in general, sometimes the most interesting and important things occur way behind the scenes. While I am unsure whether AKM will want to follow Intel’s lead and ask manufacturers to put an “AKM inside” sticker on their DACs, I think the company should certainly take more credit for the sonic performance of those products. I’ll be sure to keep AKM on my list for my upcoming trips to Japan. I am sure this manufacturer will always have something interesting to share. 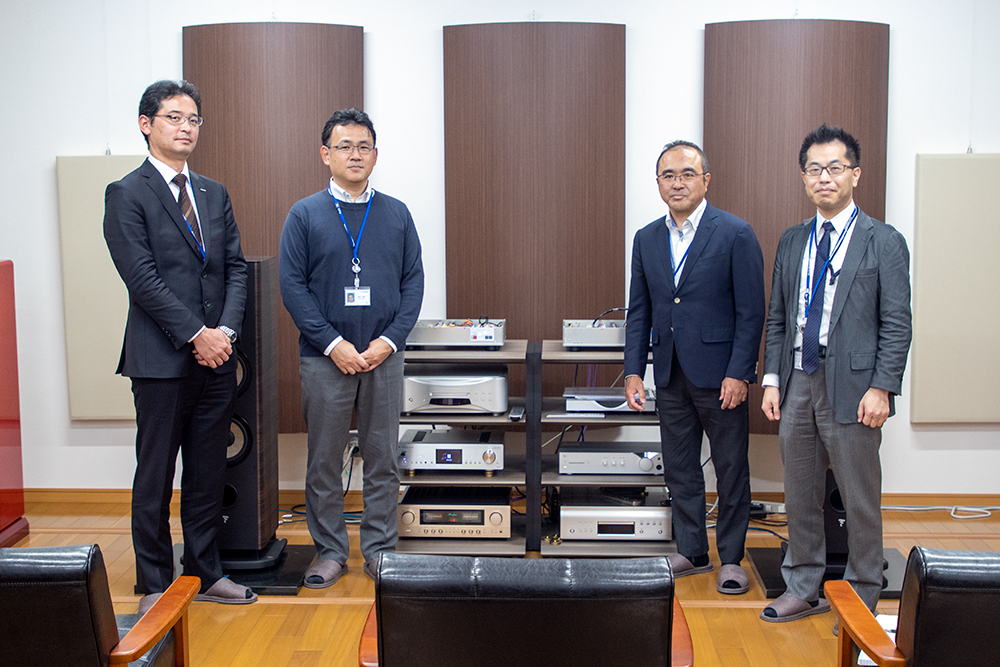