The annual Rocky Mountain Audio Fest, which ran for three days last week at the Denver Marriott Tech Center hotel, is the biggest and, in my opinion, most important consumer hi-fi show in North America. How big and important? Big and important enough that many manufacturers use it to debut their new products.

I was struck by how many new speakers included some sort of active technology, such as built-in amplification and, in some cases, a built-in DAC and wireless capability. According to the manufacturers I spoke with, this is for two reasons. Obviously, the first is to address the growing demand for wireless audio and desktop audio products. The second is that including active electronics allows them to fine-tune a speaker's performance in ways that would be difficult, impossible, and/or expensive with passive circuitry.

Here are the new (or at least recently introduced in North America) speakers from RMAF that I found most interesting. Apologies to any manufacturer I missed -- I'm just one reporter and RMAF is a big show. All prices in USD. 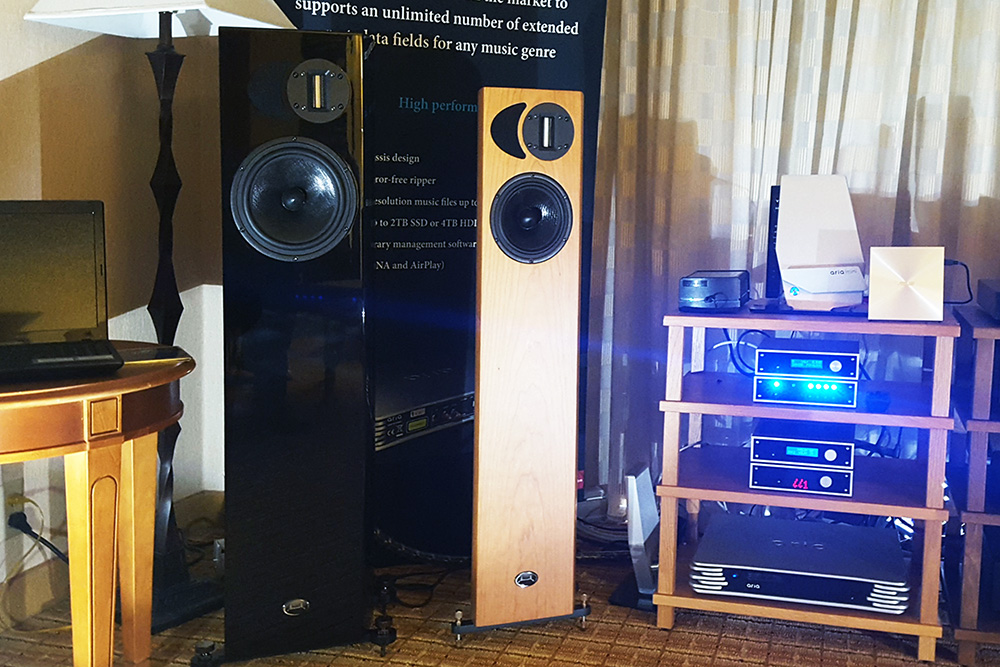 Apertura speakers have been around almost 20 years, but North American distribution is just starting now. RMAF featured the Edena (left) and Armonia (right), priced at $7000 to $7500/pair and $3900 to $4200/pair, respectively, depending on finish. The speakers rest on a large, central spike; the other spikes at the corners of the plinth are there just for stability. That half-moon-shaped thing next to the ribbon tweeter is fabric over what feels like firm felt. The distributor couldn't say for sure, but it appears to be a sort of "trap" for sound waves coming from the tweeter to control the dispersion and diffraction. I got to hear the Armonia and was impressed with its big, open sound and lack of midrange coloration. 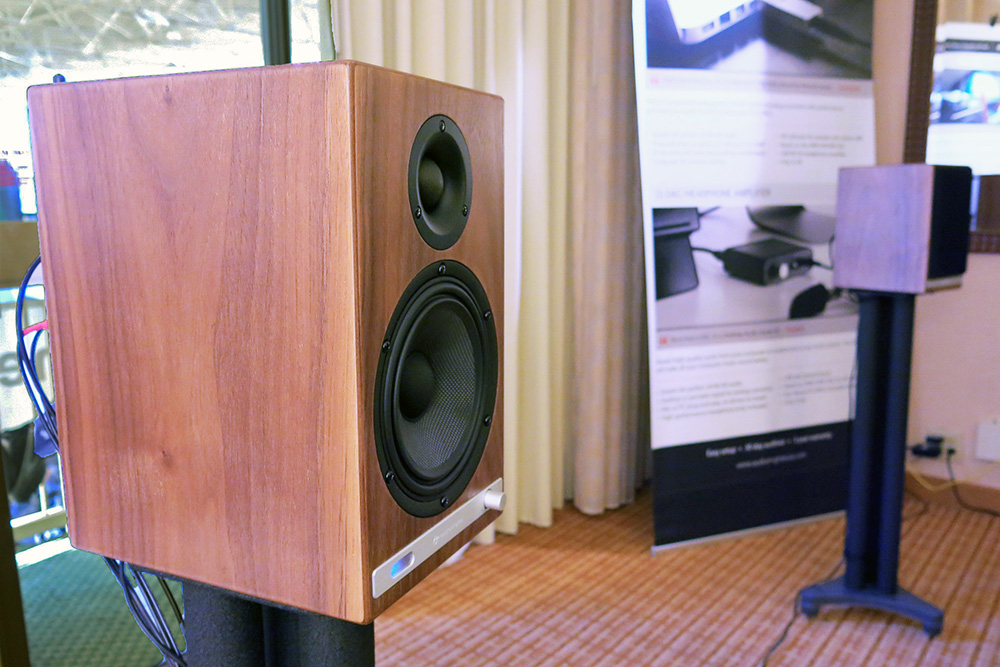 The $749/pair H6 is the biggest and baddest (i.e., best-performing and most fully featured) in Audioengine's line of powered speakers. Each one has a 55W amp and a 24/96 DAC built in. There's also a subwoofer output and built-in Bluetooth; Audioengine's Dave Solomon told me the Bluetooth range maxes out at about 100 feet, so you can leave the room with your phone in your pocket without losing signal. The 6.5" woofer has a cast, as opposed to stamped, metal basket -- a first for an Audioengine product. 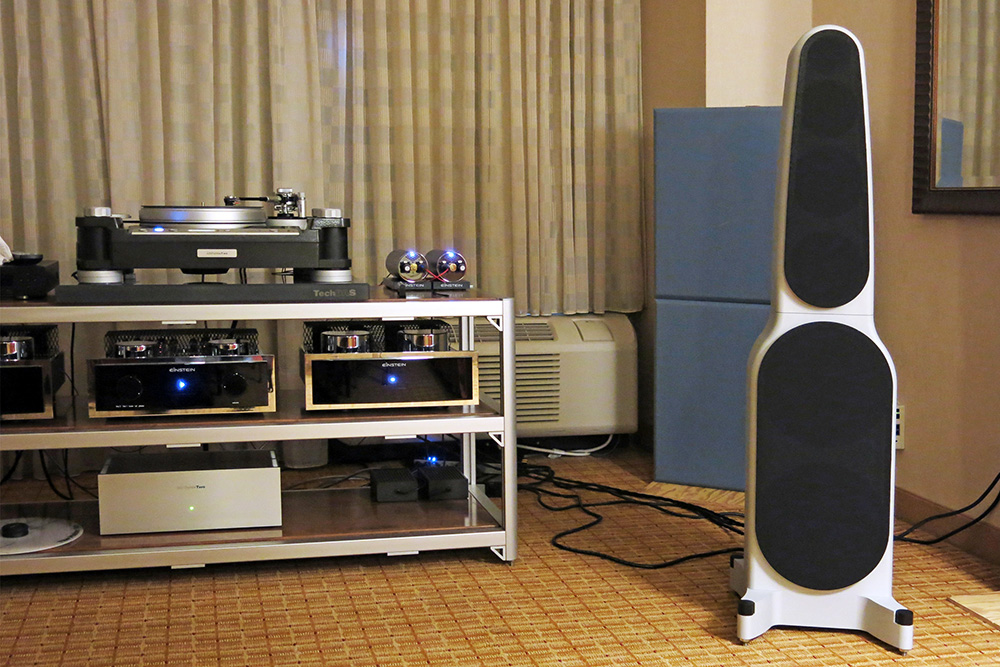 RMAF marked only the second time that AudioMachina's Maestro GSE has been shown in North America; even though the company is based in Loveland, Colorado, most of its business is in Japan, president Karl Schuemann told me. The $80,000/pair Maestro was easily one of the best speakers I heard at RMAF, in large part because of its enclosure, which is CNC-machined from solid aluminum. The lower enclosure holds two 10" woofers, powered by an internal amp rated at 1000W. The upper enclosure holds two 6" midbass drivers, a 4" midrange, and a 1" tweeter. I've knocked my knuckle against at least 1000 speakers, and this is one of the most acoustically dead enclosures I've encountered. 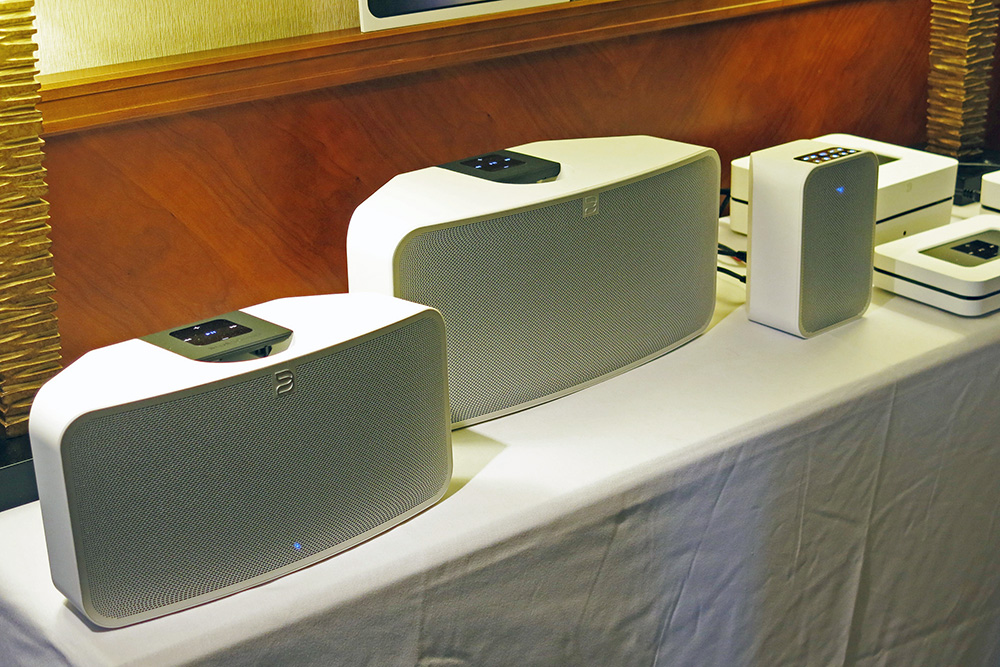 Bluesound's first wireless speaker was designed with input from PSB chief engineer Paul Barton; its three new wireless speakers shown here are fully the product of Barton's acoustical engineering and electronic tuning. The smallest is the $299 Pulse Flex 2, which can also be used in a stereo pair; it has a 4" woofer and a .5" tweeter. Next up is the $499 Pulse Mini, which has two 2" midrange-tweeters and a 4.5" woofer, as well as MaxxBass processing to create the impression of deeper, more powerful bass response. (It worked amazingly well in Barton's demo.) The largest model is the $699 Pulse 2, which features two 2.5" midrange-tweeters and a 5.25" woofer. 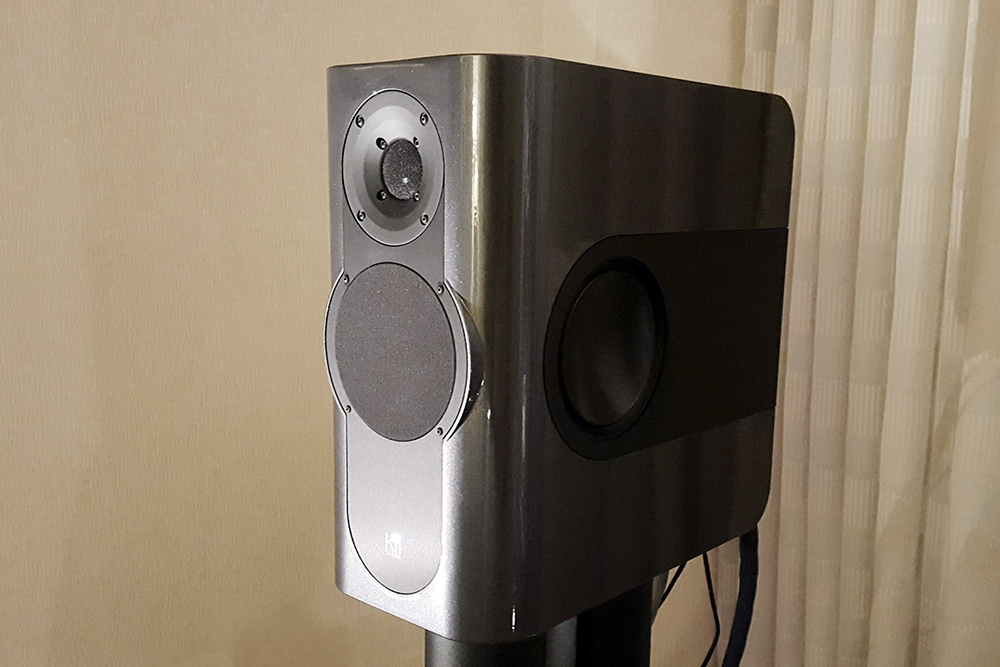 The $13,900/pair Kii Three powered speaker is built to deliver full-range sound from a bookshelf speaker. Each of the 16"-high speakers incorporates four 6.5" woofers (two rear-firing, two side-firing), a 5" midrange, and a 1" tweeter. Amplification is built in; the spec sheet says each driver gets its own 250W amp. According to the company, the crossover and woofer are positioned to make the bass and lower midrange more directional than what other bookshelf speakers can achieve, in order to improve phase coherence with the midrange and treble and to decrease the negative effects of room acoustics. 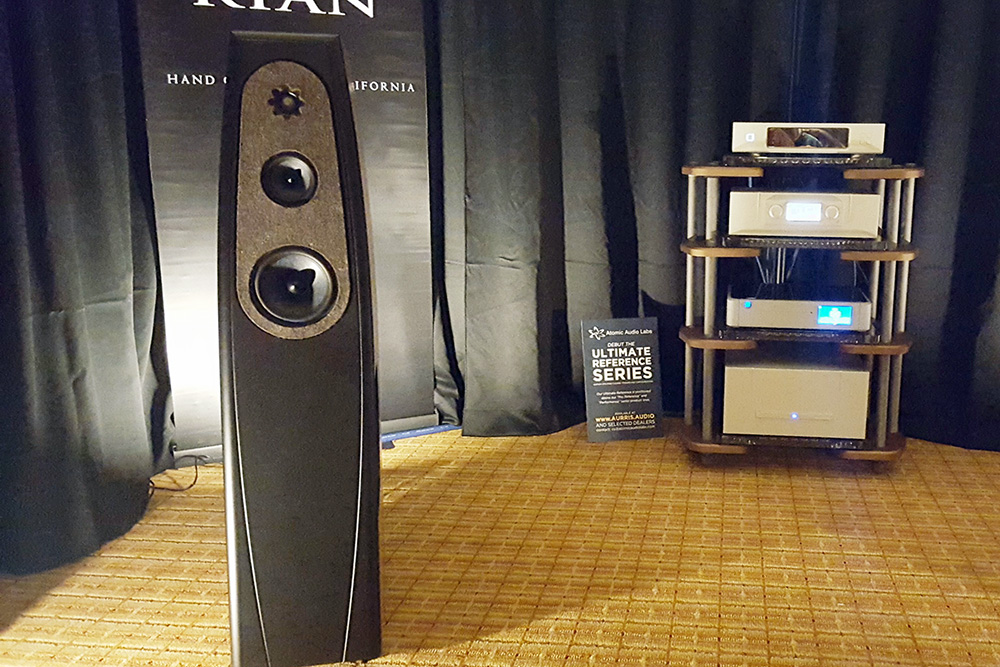 Ryan Acoustics is the brainchild of Todd Ryan, currently best known for his other gig as chief speaker engineer for Sonance. The $15,995 Tempus III is his new top-of-the-line model, featuring a 1.25" custom-designed beryllium-dome tweeter. It also employs a 4" mid, a 6.5" midbass, and two side-firing 8" woofers, all using cones made with a Nomex/Kevlar laminate. Driven by Constellation Audio electronics, the Tempus III delivered some of the cleanest, most neutral sound I heard at RMAF. 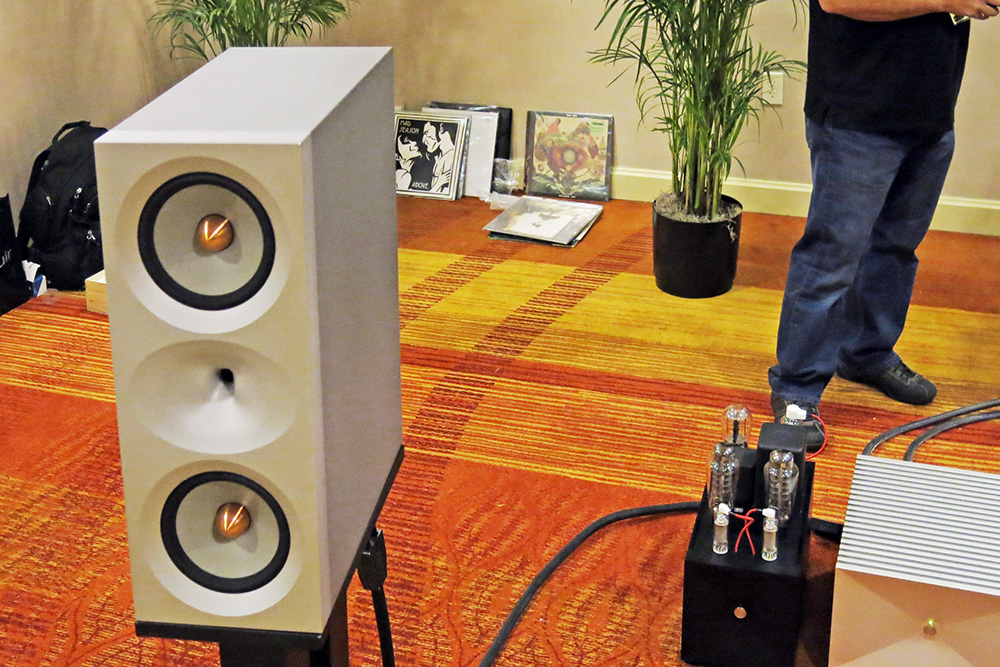 Thrax is a boutique audio company that builds high-end speakers and amps. The $20,000/pair Lyra speaker launched in March. It's built from thick aluminum slabs. Its horn tweeter employs a proprietary waveguide shape that helps it achieve impressive low-frequency response. That means it can be crossed over at a lower frequency of 1.5kHz (compared to 2 to 3kHz for most two-way speakers), which would in theory give it better midrange dispersion and a more open sound. That's exactly what I heard in the demo, which also featured the company's $33,000/pair Terres 250Wpc hybrid tube/transistor amps. 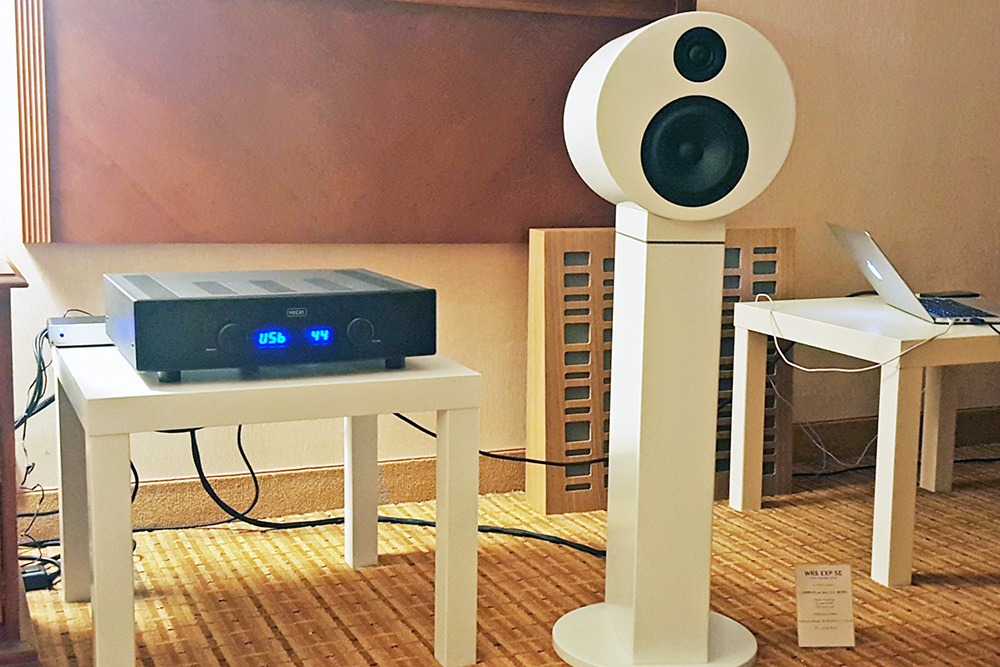 It was a surprise to see a $4999/pair speaker from Well Rounded Sound, which specializes in cute little desktop speakers with full-range drivers. The EXBSE's round cabinet is made from multiple CNC-machined rings of .75" MDF that have a flowing, somewhat erratic-looking shape inside. The rings are glued together and staggered so the internal walls form a sort of diffuser that diminishes standing waves inside the enclosure. The combination of the EXBSEs and a Hegel integrated amp produced surprisingly powerful and tight bass, and a subtly warm sound I could have listened to for hours. 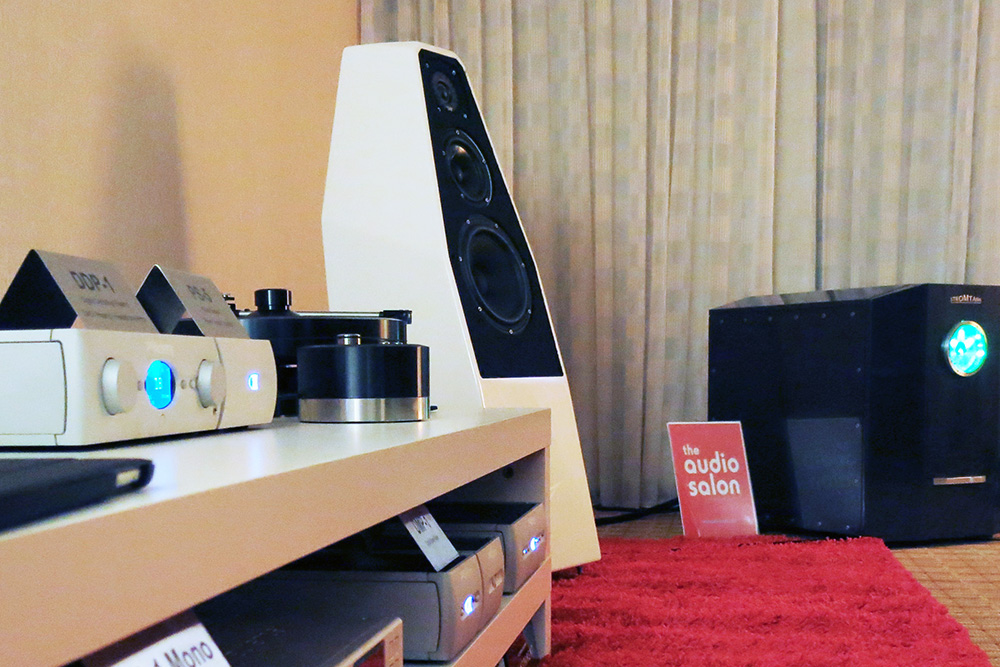 RMAF was the first chance I've had to hear Wilson Audio's new Sabrina speaker, which I'd previously seen only in prototype form. The Sabrina is an outgrowth of the WATT/Puppy, the speaker that made Wilson Audio so revered among audiophiles. Unlike the WATT/Puppy, which had a separate woofer module, the $15,900/pair Sabrina is a one-piece model. Driven by the new $1995-each, 325W DPA-1 Mono hybrid amps from Audio Alchemy, the Sabrina delivered what I think is the best sound I've ever heard from a Wilson speaker, and some of the best sound at RMAF.