Most new audio product introductions occur at the big electronics trade shows such as CEDIA, CES, IFA, and Munich’s High-End. But being the biggest consumer audio show in the US, the Rocky Mountain Audio Fest (RMAF) sees more than its share of new product introductions and North American debuts -- including numerous new speakers. There were way too many models for one person (me) to cover, so I’ll just share some of my favorites here. All prices in USD. 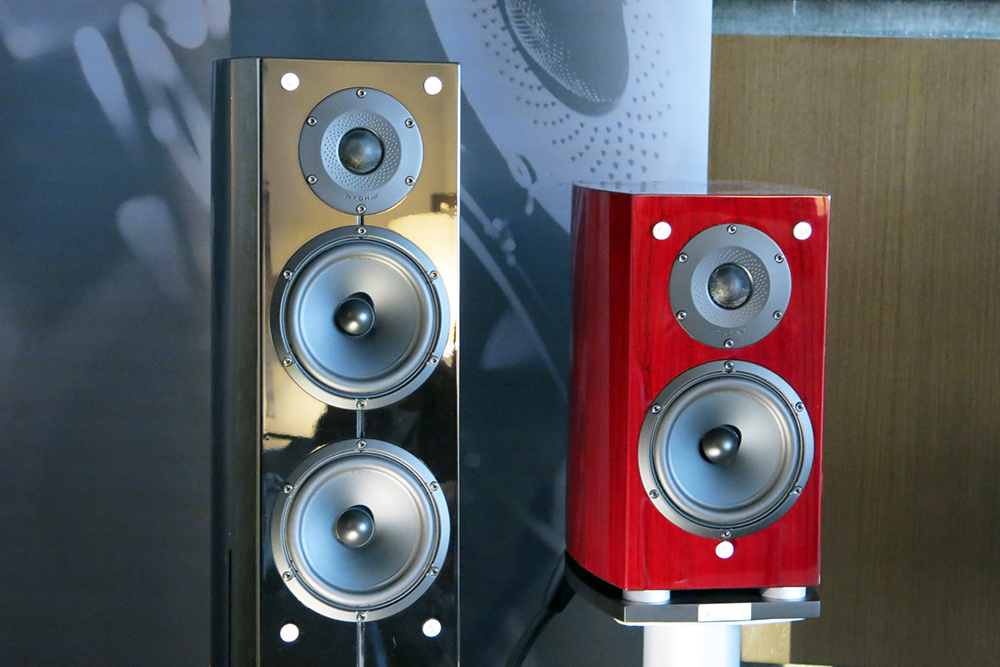 I liked the simple elegance of Atohm’s $7495-per-pair GT2-HD tower speaker and $4495-per-pair GT1-HD bookshelf speaker, both of which made their North American debuts at RMAF. Both employ first-order crossovers with a delay on the tweeter (and in the case of the GT2-HD, a slightly tilted baffle) to make them phase-coherent. The tower speaker employs an unusual “reverse spike” design: it sits on a platform with spikes that point up. A larger tower is also available, along with matching center and surround speakers. 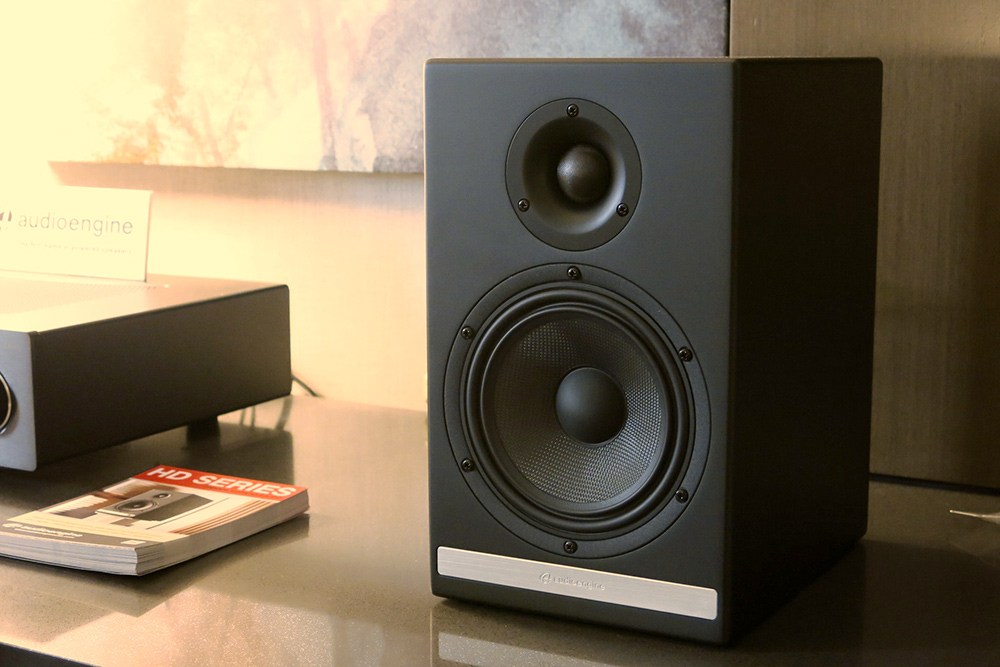 Audioengine says its recently introduced HD6 has won lots of fans, but several customers expressed a desire to use the amplifier of their choice rather than the speaker’s built-in amplifiers. For them, the company has introduced the HDP6, a passive version that Audioengine says is just like the HD6 but without the amps, internal DAC, and Bluetooth receiver. It’s available in walnut, cherry, and black finishes for $499/pr., $250 less than the HD6. 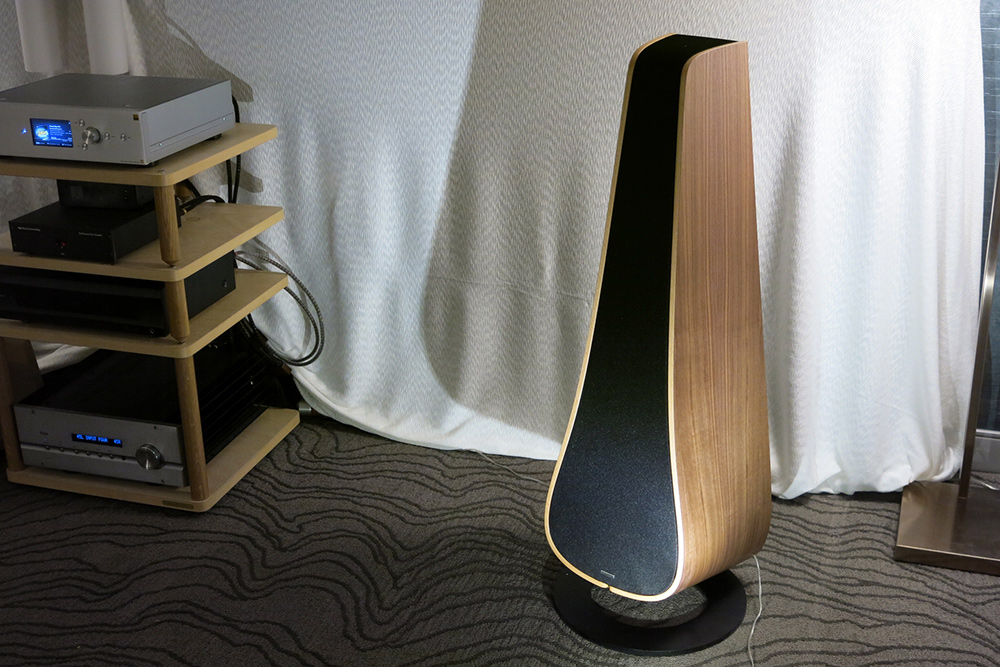 “There’s nothing flat in there,” a Davone rep said of the $9000-per-pair Solo. The speaker’s birch plywood sides curve from top to bottom and front to back, in order to eliminate internal standing waves. The grille hides an 8” woofer, a 4” midrange, and a 1” tweeter. 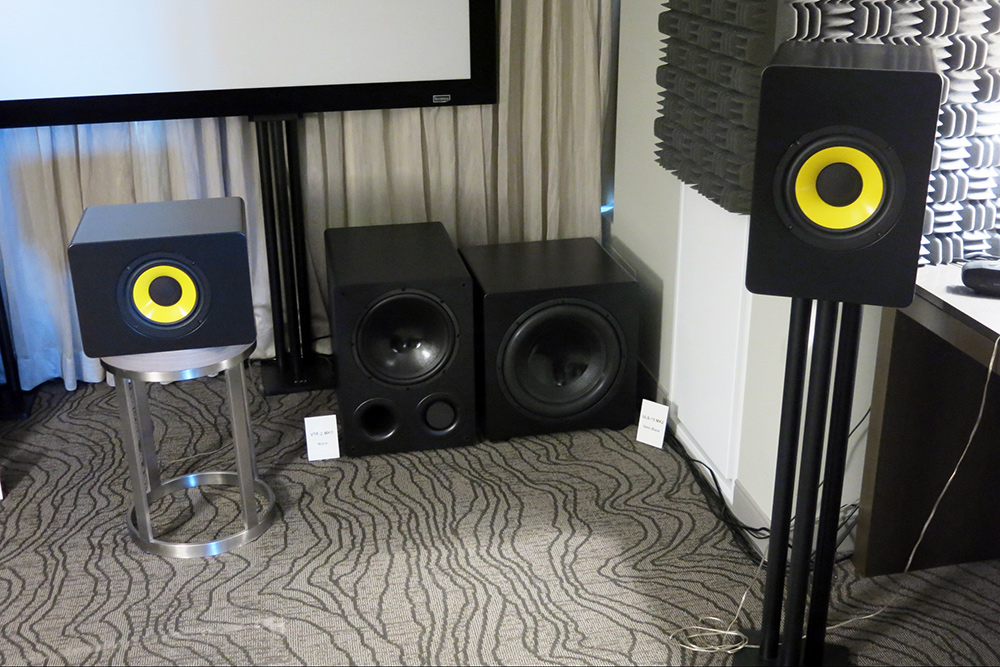 For me, the most exciting introduction at RMAF was the Hsu Research CCB-8, a new stand-mounted speaker that works for stereo or for any channel of a home-theater system. It uses an 8” woofer with a tweeter mounted concentrically behind the woofer magnet. The tweeter vents through a hollow pole piece, which in conjunction with the woofer cone forms a constant-directivity horn. Price is expected to be about $699 per pair. Hsu also introduced two new subwoofers: the $399 VTF-1 Mk3 and the $539 VTF-2 Mk5 (shown at left in the photo), which respectively have 10” and 12” woofers. Both are front-firing versions of older, down-firing models. 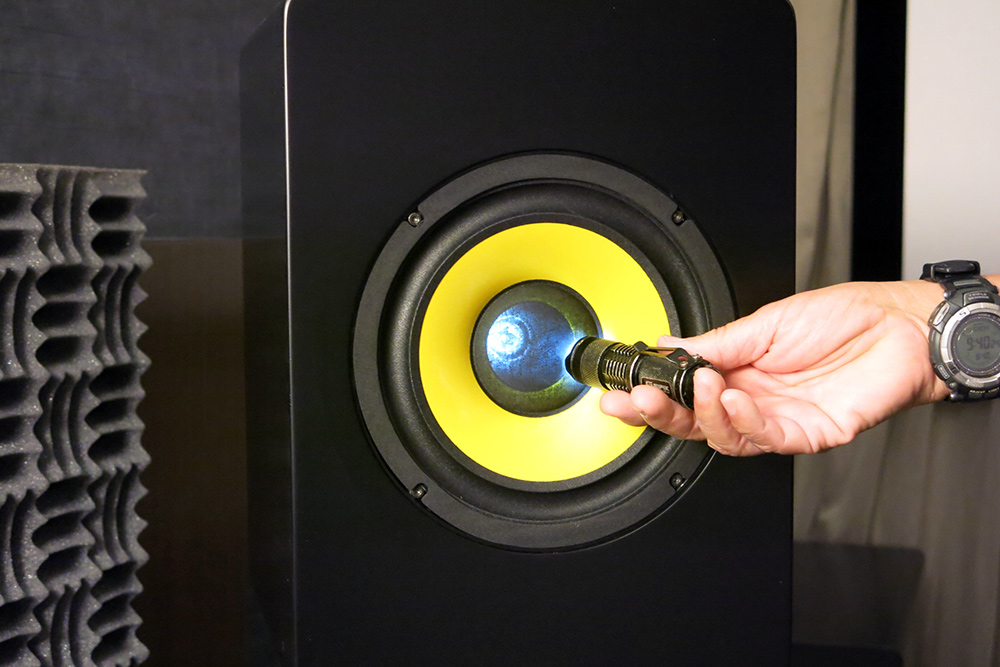 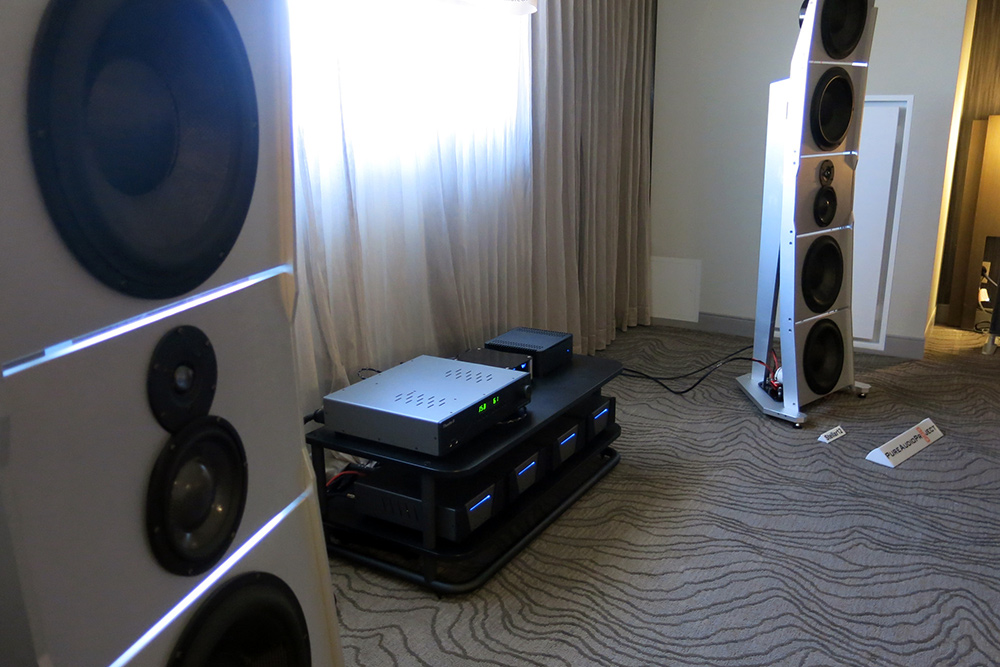 If you’re looking for a speaker that makes a visual impact as well as a sonic one, the PureAudioProject Stellar12 should fill the bill. It’s an open-back speaker made from aluminum billet. The midrange and woofer drivers are unenclosed, so they radiate sound forward and back. Price of the speaker is $20,000 per pair. Of course, the Stellar12 produced a huge soundstage, but I was surprised to hear that it also produced fairly precise sonic images. 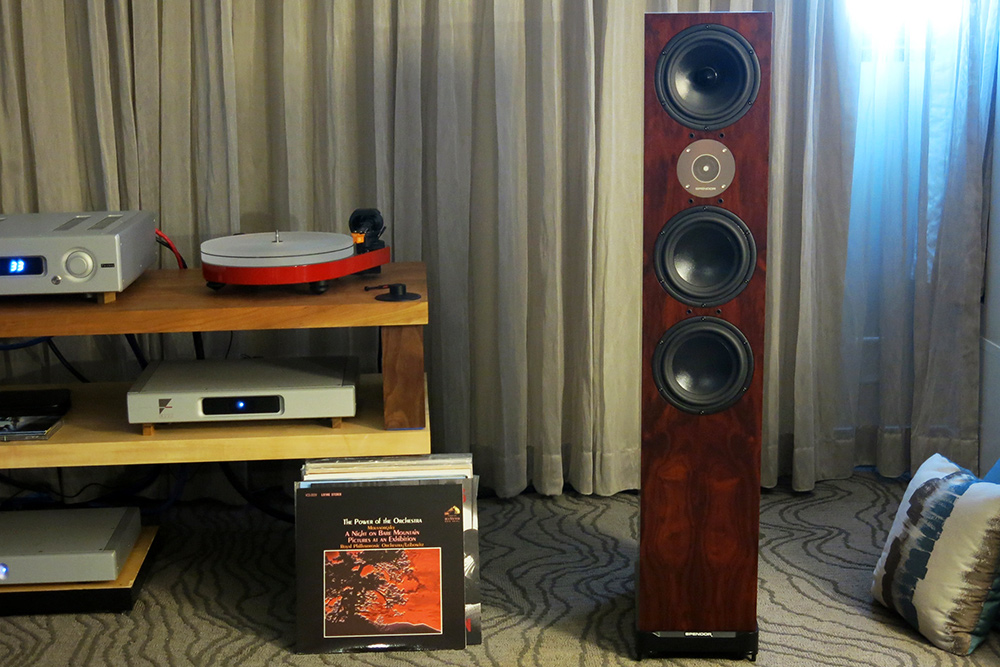 RMAF marked the North American debut of Spendor’s $9999-per-pair D9, a three-way model with two 6.5” woofers and a 6.5” midrange. Like the existing D7, it uses Spendor’s LPZ tweeter, which positions a stainless-steel chamber in front of the tweeter diaphragm that is said to flatten and optimize the tweeter’s phase response. 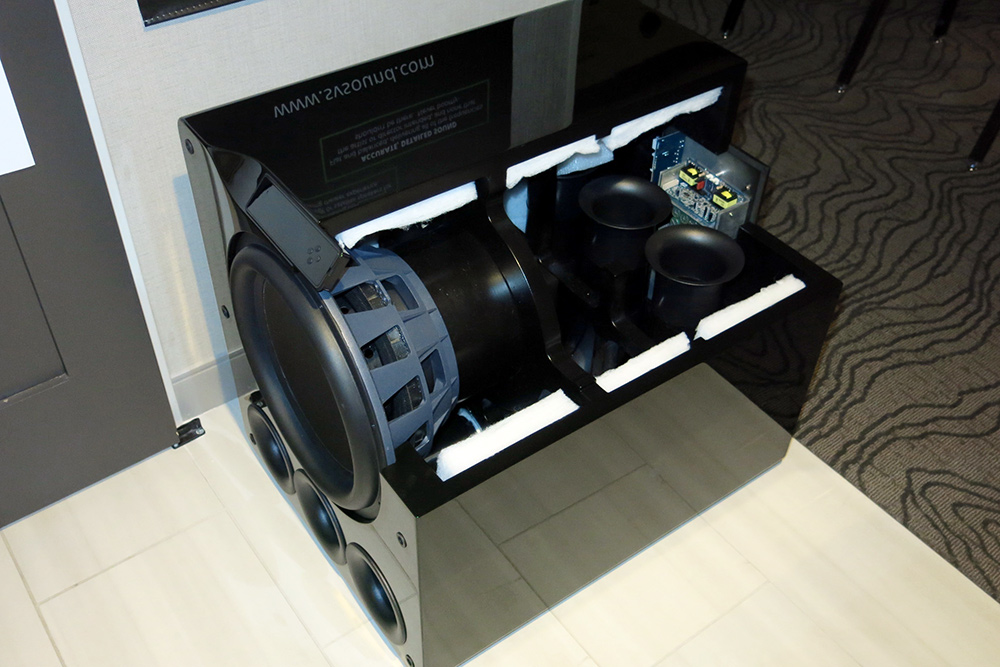 SVS is known for making some of the world’s best subwoofers, but its woofers have until now topped out at 13”. The $2499 PB16-Ultra uses a new 16” driver with a colossal 8”-diameter, edge-wound voice coil. It employs a new class-D amp with discrete MOSFET outputs, rated at 1500W RMS and 5000W peak. It’s also the first SVS sub with a front control panel, and there’s also an iOS/Android app that provides full control over all of the subwoofer’s features. You can use as many of the three front ports as you like; the app will tune the response appropriately. A sealed model, the $1999 SB16-Ultra, is also available. 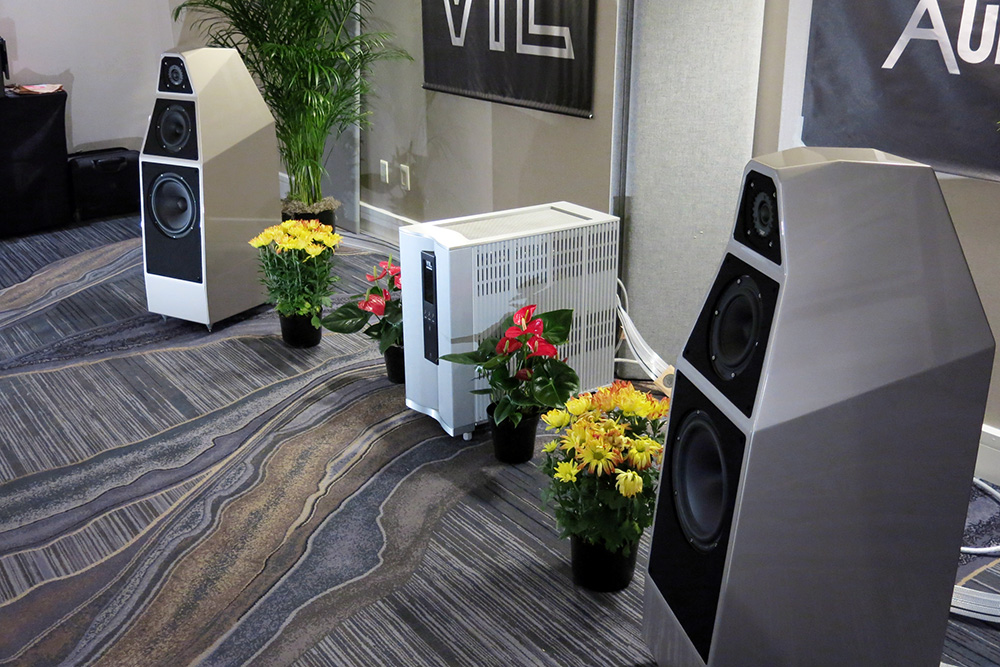 Wilson Audio’s Yvette speaker replaces the Sophia, which debuted 15 years ago. The tweeter and midrange baffles are slanted to time-align the drivers with the 10” woofer. The $25,500-per-pair Yvette employs two different proprietary composite materials: S-Material for the midrange baffle and X-Material for the woofer and tweeter baffles. 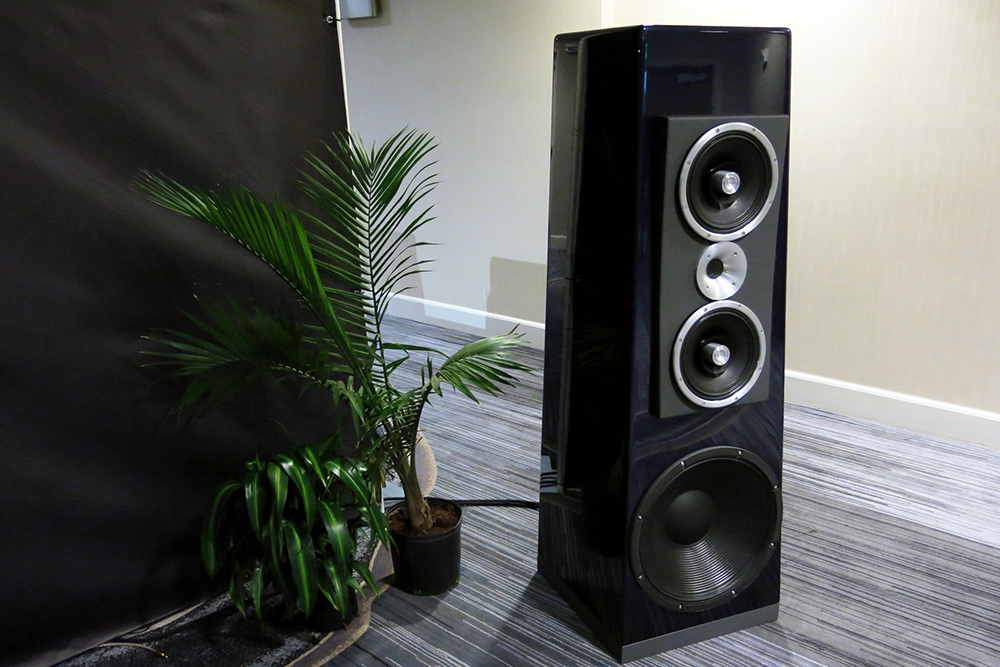 Zu Audio showed a prototype of its new flagship, the Experience, which will retail for about $30,000 per pair. The company said the voicing is close to finalized, but the final shape may change some, likely becoming slimmer and a bit smaller. Sensitivity is rated at 101dB, so the Experience should be able to reach very loud volumes on less than 10W.