I haven’t been to Rocky Mountain Audio Fest (RMAF) since 2013. That year, RMAF was so lacking in new products -- or any really interesting products, actually -- that we left halfway through the second day to go see Captain Phillips at a nearby movie theater. After our stint at RMAF 2013 completed, I vowed not to go back and instead spend our time covering shows elsewhere.

Last year, however, Brent Butterworth covered it for us and said, “Really, you need to be at this show. It’s much better now.” I listened to him and came back this year -- and I’m glad I did. RMAF 2018 has turned out to be much better than I thought it would be, with many new and interesting products worth photographing and writing about. I first concentrated on hi-fi electronics, which are shown below, with all prices in USD. 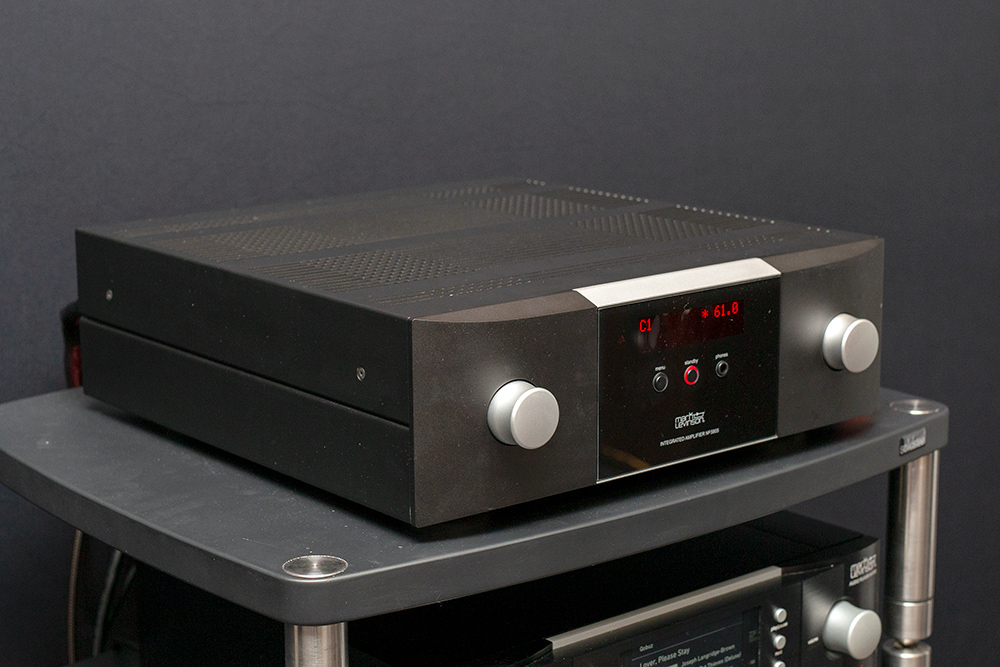 Harman’s Mark Levinson brand used RMAF 2018 to unveil its lowest-priced integrated amplifiers ever -- but stressed that they’re still all manufactured in the USA and their Levinson DNA is intact. Shown above is the No.5805, priced at $8500. The company also showed . . . 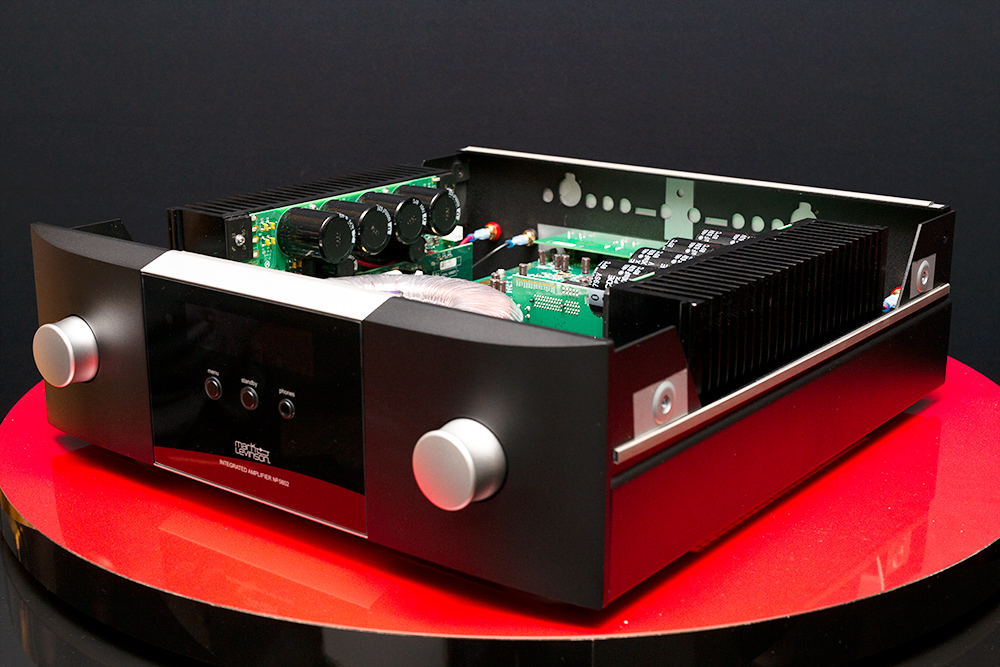 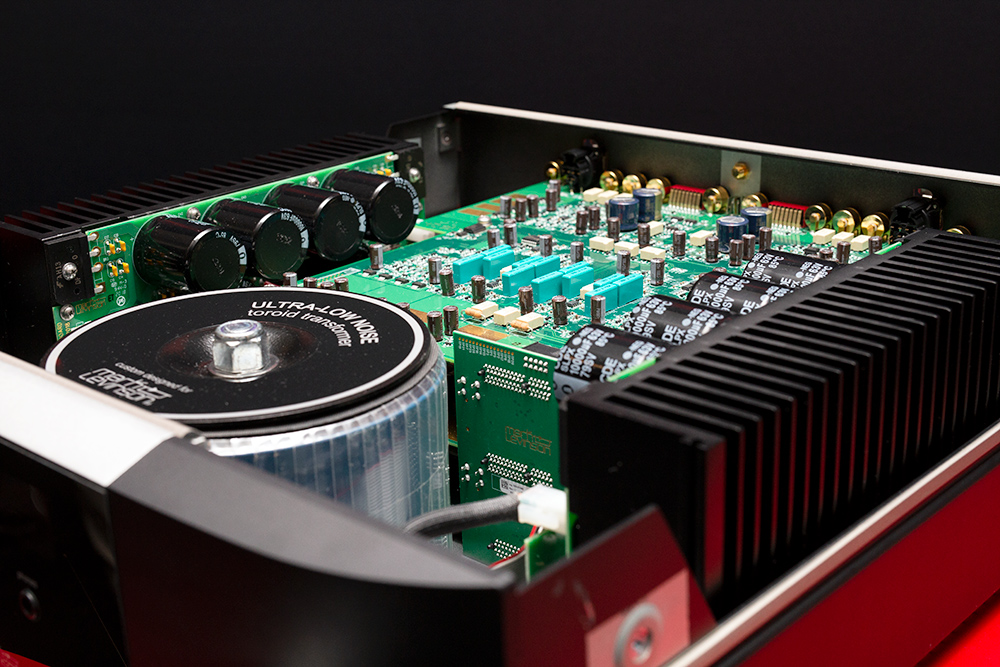 . . . are an analog board inside and analog inputs on the backside. There are one pair of line-level balanced (XLR) and two pairs of line-level single-ended (RCA) inputs, plus one stereo input (RCA) for the moving-magnet/moving-coil phono stage, which can be adjusted via DIP switches also located on the back. 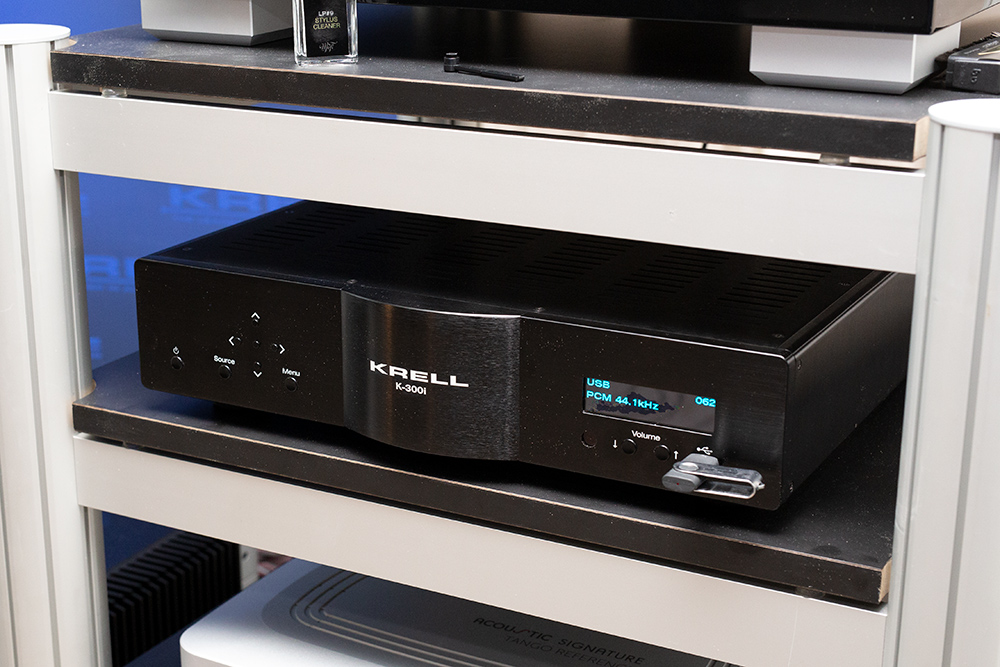 Krell used to be a really big name in hi-fi, but in recent years, it’s more or less fallen off the audiophile map. But with some recent staffing changes and new products in the works, the company plans to change that. One of the new things is the K-300i integrated amplifier, which is available in silver or black finish and carries a base price of $7000, with an optional digital module for $1000 more, based on an ESS Technology Sabre Pro DAC chipset. The K-300i’s power-amp section uses the company’s iBias technology and is rated to deliver 150Wpc into 8 ohms or 300Wpc into 4 ohms. It uses a 771VA transformer and has 80,000µF of power-supply capacitance. Analog inputs include two pairs of balanced (XLR) and three pairs of single-ended (RCA). The module’s digital inputs include one TosLink optical, one S/PDIF coax (RCA), one USB, two HDMI (with support for 4K video), Bluetooth, and Ethernet. The module, which is also Roon- and MQA-compatible, supports Spotify, vTuner Internet Radio, Tidal, Deezer, and Qobuz streaming services. 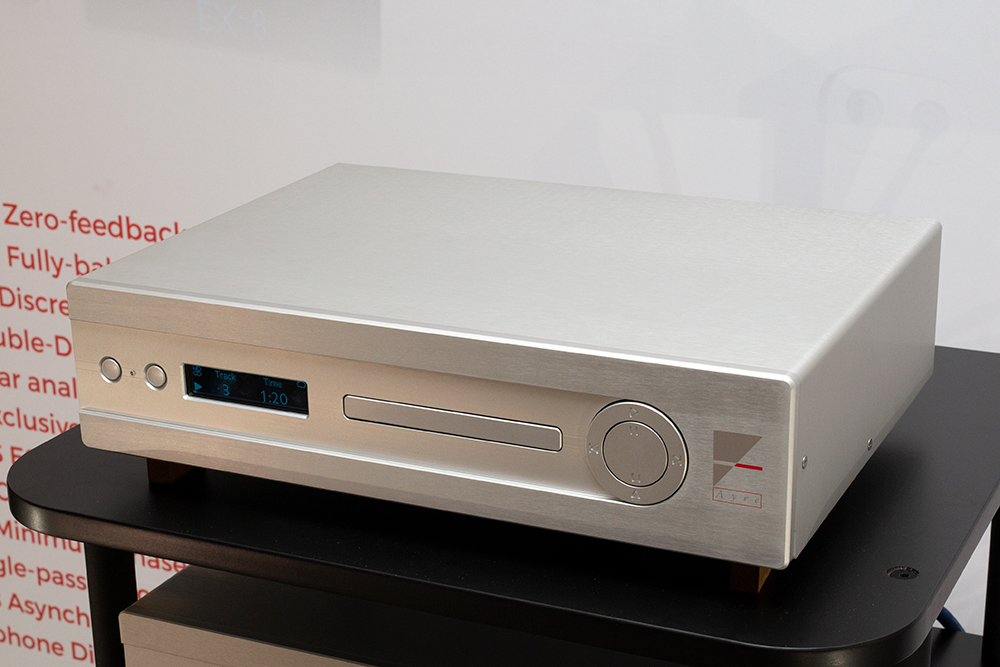 Ayre Acoustics’ headquarters is about an hour by car from the Denver Marriott Tech Center, home to RMAF 2018. Locals, you could say. The folks at Ayre used this year’s RMAF to introduce the CX-8 CD player, which offers more than CD playback. In its base state, which costs $4950, it has S/PDIF digital inputs, so it can be used as a DAC, as well as single-ended and balanced analog outputs. Another $500 will add an asynchronous USB input, while $700 more will get you an Ethernet connector. Getting USB and Ethernet together costs $1000, saving you $200 and making the cost $5950 with all options included. 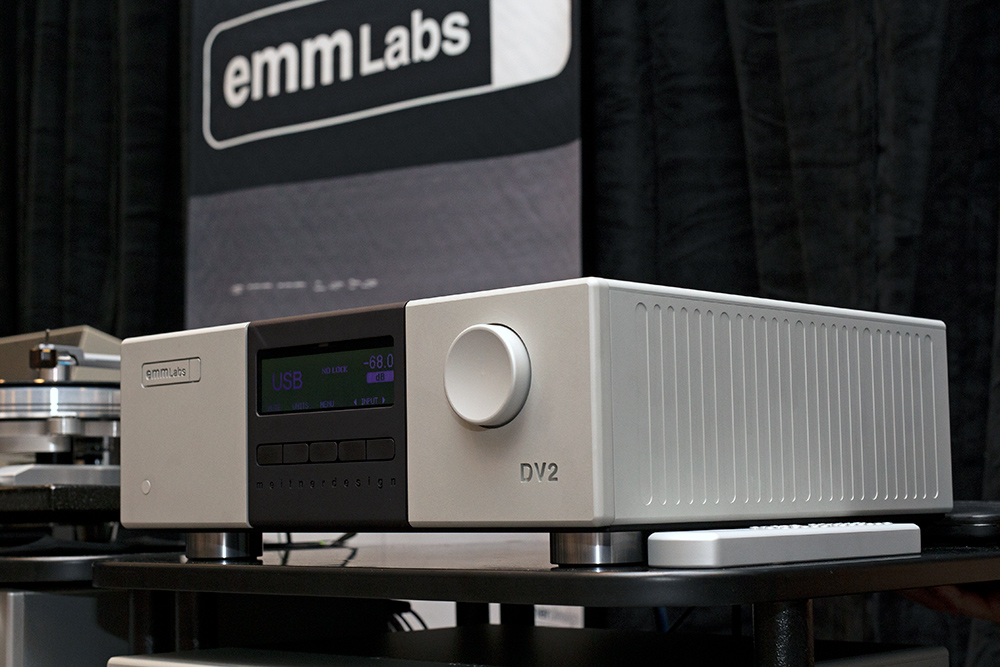 EMM Labs showed the DV2 DAC-preamplifier ($30,000) at Munich’s High End 2018, but that one was a prototype. Now the DV2 is finished and is ready to ship. The DV2 is pretty much the company’s DA2 Reference DAC, replete with proprietary Ed Meitner-designed 16X DSD (DSD1024), single-bit digital converters inside, but with a digitally controlled analog volume control and support for MQA playback added. One nifty feature is a two-position gain toggle on the DV2’s backside, for higher or lower gain, to better match it with an associated amplifier, which you can connect with either the single-ended (RCA) or balanced (XLR) outputs. 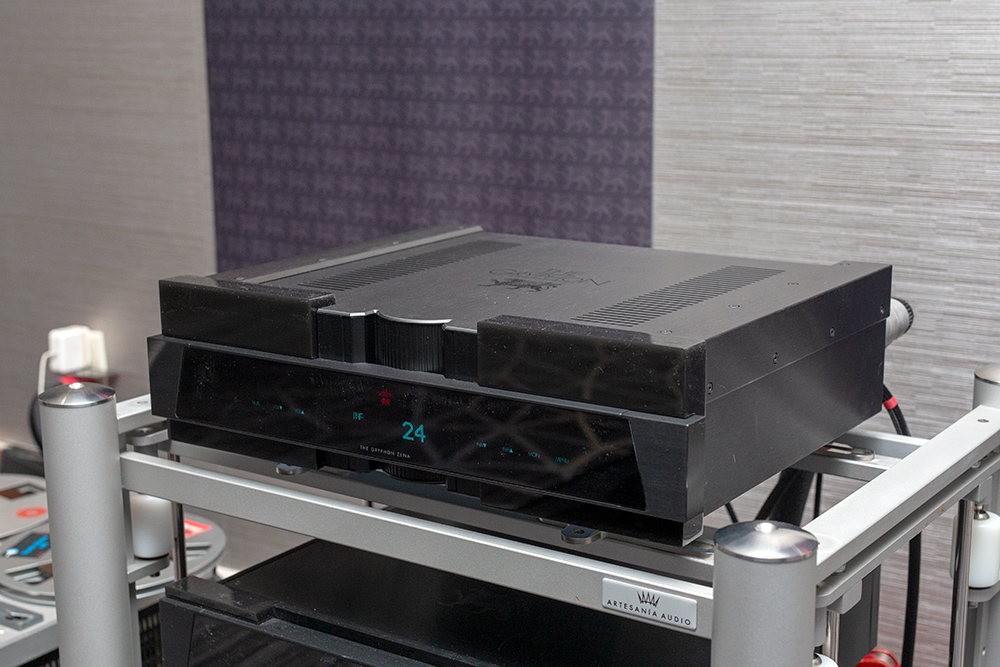 Gryphon Audio Designs’ Zena preamplifier was on display for the first time at High End 2018 in Munich, but it wasn’t playing there. I got to hear it at RMAF 2018, in a system assembled by On a Higher Note, Gryphon’s North American importer. The Zena has a base price of $17,500 and is a zero-feedback, pure-class-A design, implemented in a true dual-mono configuration -- meaning complete separation between the left and right channels. Like all of Gryphon’s products, the Zena offers beautiful industrial design and heavy-duty build quality. Optional are a moving-magnet/moving-coil phono stage for $2150 and a PCM- and DSD-capable DAC module for $6000, though the expansion slot can accommodate only one of the two options. 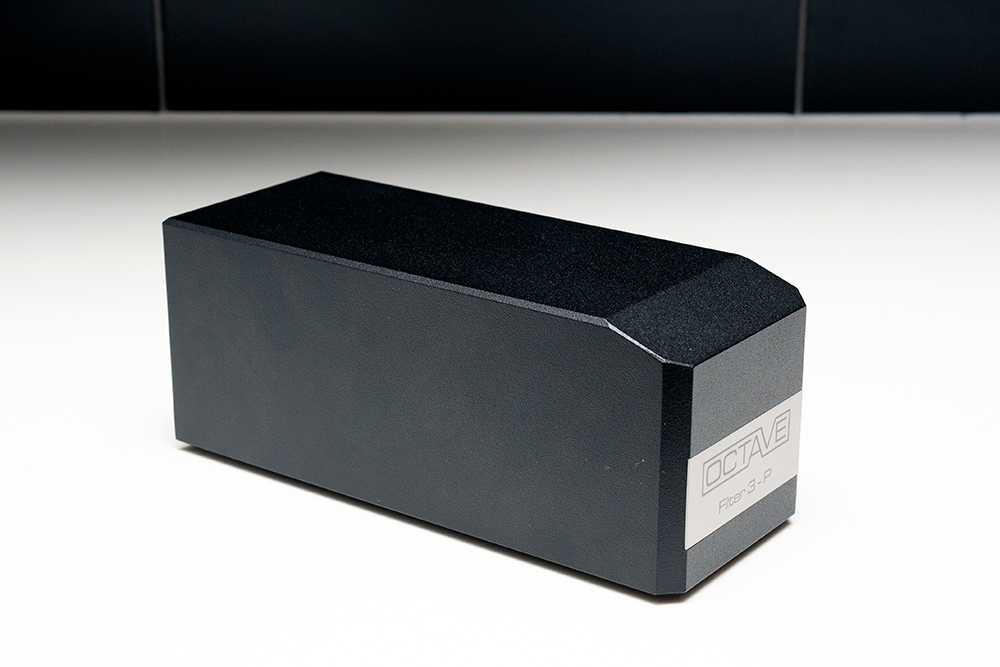 The radio-frequency energy generated by digital audio equipment has been a source of concern for some audiophiles, but I never pondered it much until I talked to the folks at Octave Audio. They’re now offering the Filter 3-P, a device that’s intended to be placed after a digital source, such as a DAC and/or disc player, and just before a standalone preamplifier or integrated amplifier. Its purpose is to filter out any noise that the digital components might have generated before the noise can be amplified to even greater levels. It’s priced at $2750, and offers single-ended and balanced connections. You simply plug interconnects from the source component into . . . 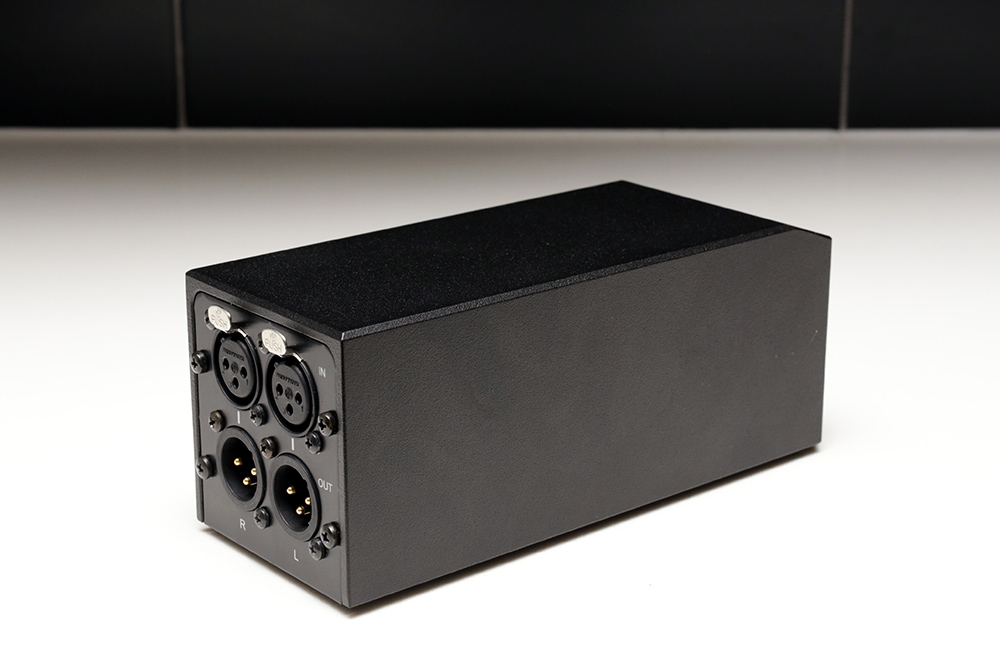 . . . the Filter 3-P’s inputs, then connect more interconnects between the Filter 3-P’s outputs and the inputs of a preamplifier or integrated amplifier. Like I said, I wasn’t worried about this problem, but since adding the Filter 3-P to a system is so easy, I’m now kind of keen to try it out.