Starting Off with a Bang -- Literally! 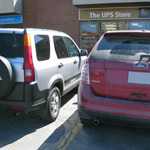 Our goal with this year's Salon Son & Image coverage is to produce the largest show report ever done at this event, and we also want to get it online quicker than anyone. Fifteen years ago when we first started covering this show, no one else was doing online coverage. Times change, though, and we now have competitors trying to catch up to our on-the-spot coverage. The result is that we have to be better than ever. In order to meet this year's goals, it means getting to Montreal early and starting off our coverage with a BANG! That bang, though, was just supposed to be a figure of speech; it wasn't supposed to involve my car.

It all started when I decided weeks before this show that I'd take a two-hour train ride from my home in Ottawa to Montreal rather than drive. The train is convenient, relaxing, and it allows me to actually work since it now has free Wi-Fi access. Of course, I had to actually get to the train, and prior to arriving at the train station I needed to do a rush shipment via UPS.

Early in the afternoon my wife drove me from home to the UPS Store for what should have been a quick package drop-off before going on to the train station. But while in the store filling out the paperwork, I glanced outside to see a gentleman parking unnecessarily close to my car and then carelessly swinging his door open until, bang, it hit mine. Who doesn't hate it when that happens? 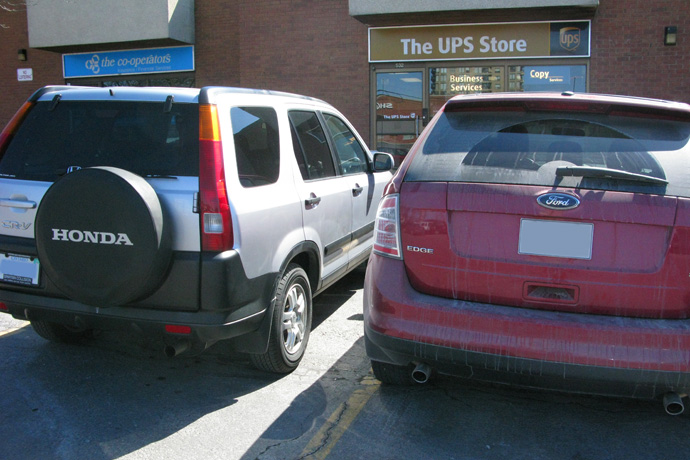 My wife was in the car and I could see her get out to confront the man, who said a few words to her, shrugged his shoulders, and then quickly started scurrying away. I immediately left the store to talk to him and deal with this -- I wasn't about to allow him to simply walk away from damage he might have done. At first he denied that his door hit mine. But then he changed his story and admitted that it did when my wife walked sternly toward him and assured him that it hit hard enough for her to hear it. He nodded his head, but then said it really didn't matter since he felt his door didn't hit mine hard enough. Then he said something about us simply forgetting it all because it was such a nice, sunny day. How convenient for him.

Seeing that he was not about to take responsibility for anything, I knew my questioning needed to be firmer with a conversation that went pretty much like this:

Me: "Sir, you hit my car and you just can't walk away from that until we see if there is damage."

Me: "Sir, I want to remind you that you just hit my car."

Him: "You are an angry little man. Forget about it."

Me: "I'm not going to forget about it. In fact, it's now long past being forgotten. First you hit my car, then you lied about it, then you admitted you did it, and now you want to forget this happened. See a problem with that? But first let me talk about something you just said: Is the word little supposed to get me mad?"

Him: "Uh huh." He followed that up with a smile.

Me: "Look, I'm 5’5” tall and I'm 46 years old. I've been short my whole life -- no surprise. I'm not about to grow, either. Frankly, calling me names like that worked when I was five. It's been more than four decades since then."

Me: "So, yes, I'm angry that you hit my car. And, yes, I'm even angrier that you lied to me. And there's now a dent and mark on my car, so please give me your name and address so I can write it down."

Me: "OK, let me get your license plate number and take a picture of your car."

I could go on about the words he then said to me, some of which I'd have to censor to keep this a family-friendly article, but let me jump to the most important part of this story. You'll never see a belligerent person's attitude change quicker than when you pull a camera out of your pocket and take a picture of what's going on. I'm pretty sure his jaw hit the pavement when I did that. And why do it? I learned years ago from a friend who worked as a personal-injury attorney that the best thing you can have at the scene of any accident, no matter how minor it is, is a camera to record what happened. This was the first time I've ever had to actually resort to doing this (and I was lucky enough to have a camera on me, simply because I was going to Montreal), but believe me: the outcome after I used it was as astonishing as it was satisfying. This gentleman's tone changed substantially once I snapped the photo, and he quickly handed me all the personal information necessary should my car need to be fixed. Moral of the story: photographic evidence is the best way to win an argument. 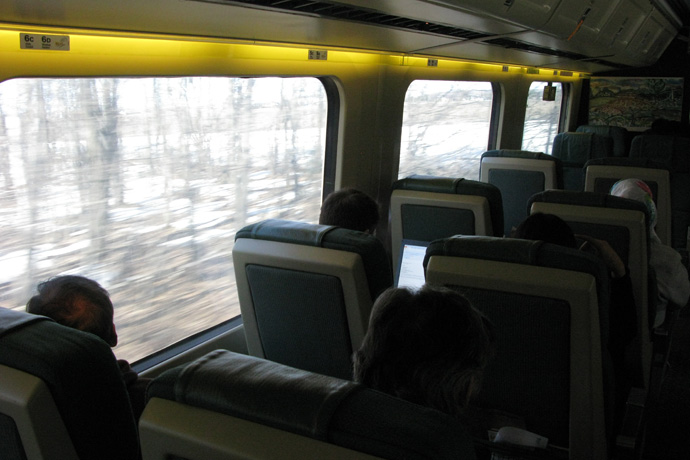 My trip to the UPS Store obviously took longer than I anticipated, so I was in quite a rush for the train. Once I boarded, though, the slight adrenaline rush from that previous altercation quickly disappeared. The train ride, which is happening as I write this, is relaxing me, which is allowing me to better prepare for the four grueling days of show coverage that lie ahead. Furthermore, a train ride through this part of Canada at this time of year is wonderful, and free Wi-Fi access that works perfectly is as useful as it is surprising that it even exists. After all, how else could I have written this article, uploaded it, and had it online when I haven't even arrived in Montreal yet? Internet-based publishing has no boundaries anymore. 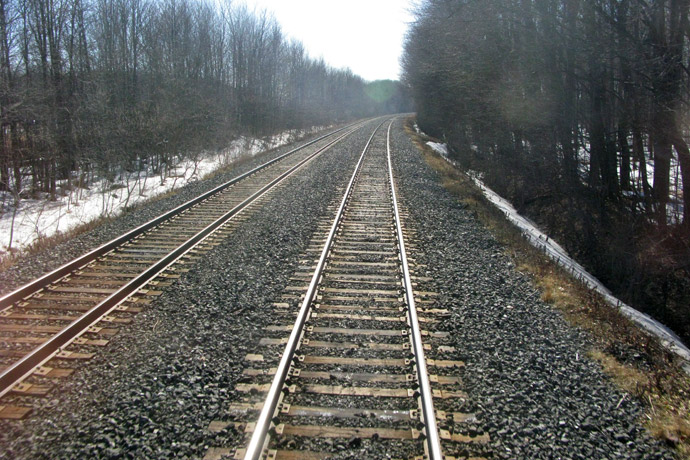 Salon Son & Image 2011 is starting off with a bang -- in more ways than one! -- with our goal being to produce our biggest, best show report from Montreal ever. Look for much more to come -- and, hopefully, no more incidents like the one at the UPS Store on the way to the show.