The wacky world of audio contains a huge number of fringe players. You've got the Lowther single-driver crowd who get their kicks from a remarkably quick midrange at the expense of the frequency extremes. There are the horn dudes who crave the jump factor of their 104dB-efficient speakers despite vocals that often sound like they're coming out of a megaphone.

And then there's the Audio Note crowd. I've often thought of the AN boys as somewhat akin to Scientologists. They believe deeply that their interpretation of music is correct, and that -- it seems to me anyway -- everyone else is marching out of step. Doug Schneider informed me that Audio Note was displaying a brand new tonearm, and that propelled me to their room, despite the fact that I'm generally not a big fan of their house sound. Rather than just getting the skinny on their new Arm Three V2, I decided to act like the professional I'm supposed to be and put my preconceptions aside.

So I sat down for a listen. The system comprised the aforementioned Arm Three V2, a non-current turntable, the TT3 Reference, their $15,000 E/Lexus Signature speaker, and the $22,000 Jinro amplifier (which is the same as their legendary Ongaku amplifier except that it uses copper instead of silver for wiring). 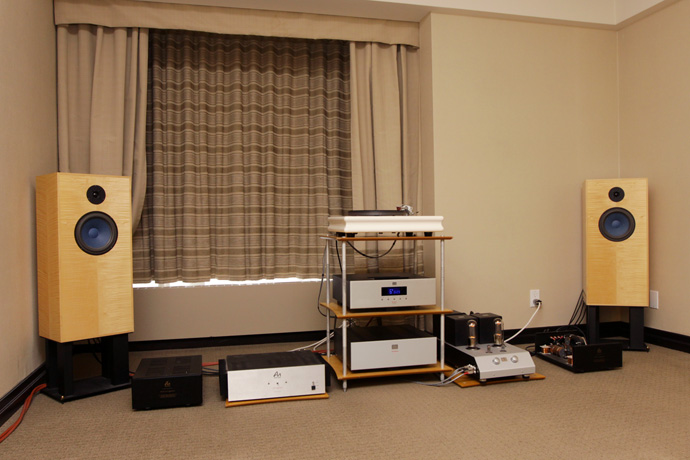 My first impressions were quite positive. There was a ton of dynamic snap with lots of body. That tube richness, a distinctly triode flavor, suffused the presentation, imbuing the music with a juicy, analog quality.

But I quickly began to see some issues with the way in which the speakers were manipulating the sound. Audio Note had the speakers pushed right into the corners of the room, emulating the setup of corner horns of yore. Unfortunately, this orientation left a fairly big hole in the center of the soundstage and locked the sound so that each of the speaker locations was clearly identifiable. So I wasn't getting very much center image.

That wasn't a showstopper for me. I was still able to thoroughly enjoy the dynamic ebb and flow of the music, and that triode sound -- it was just jammy. The Jinro amp, its big-ass machine-age tubes glowing with the promise of lethal voltages -- sounded perhaps even more tubey than most of the 300B amps of my experience, but I don't see that as a problem. I can happily listen to outrageously tubey amps with utter pleasure. I might not want to listen to that sort of presentation every day, but hey -- variety is the spice of life.

The Audio Note gear is kind of expensive, though. For $37,000 there are a lot of amp-speaker combinations I'd choose before the Jinro-Lexus setup. But sitting there, listening to that rig in that room, I could certainly see the appeal.