Rooting around an audio show for analog products is just so 20th century. It's like searching for buggy whips at a car show.

Look, it's not as if I enjoy analog just to be obstreperous. I fully realize its faults. I really do. But LPs and their associated infrastructure just feel so much more human than CDs and their sterile, dry, husk-like players. Recently I digitized my entire CD collection and stored it on a server in a RAID array. Now that my CD collection is freed from those tacky silver discs and their brittle plastic cases I feel way better about listening to digital music. It wasn't digital per se that I objected to. It was CDs themselves.

I still prefer the sound of analog, though, and -- convenience aside -- I'd rather listen to a record than a digital file any day of the week. Further to that, I never find myself drawn to a CD player with anywhere near the avarice that turntables bring out of me. I mean really! Which is sexier? Some gumpy rectangular CD player with its cheesy little drawer or a mighty turntable with layers of steel, chrome, aluminum, wood, and perhaps unobtainium forming a bulletproof constrained-layer sandwich.

I got carried away there. 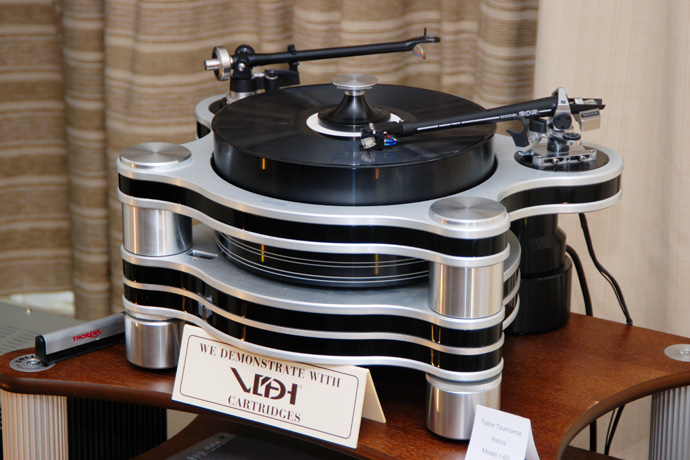 So I guess it should come as no surprise that my first sighting of the Hanss T-60 turntable left me slightly gobsmacked. The T-60 has been around for a little while now, so it's not exactly breaking news, but this was the first time I'd seen it in the flesh. It's one big sucker. The plinth is a two-layer jobbie, with each level composed of acrylic sandwiched by aluminum. The platter cuts right through both plinth layers, and it's a 20-centimeter-thick chunk of aluminum that weighs in at over 40 pounds. There are two motors in the T-60, each of which uses two belts. In order to reduce the pressure on the bearing, the platter is partly levitated by opposing magnets. Cool, right? And what's even cooler is that the T-60 retails for $6500, which seems mighty reasonable considering the apparent quantity and quality of the unit. 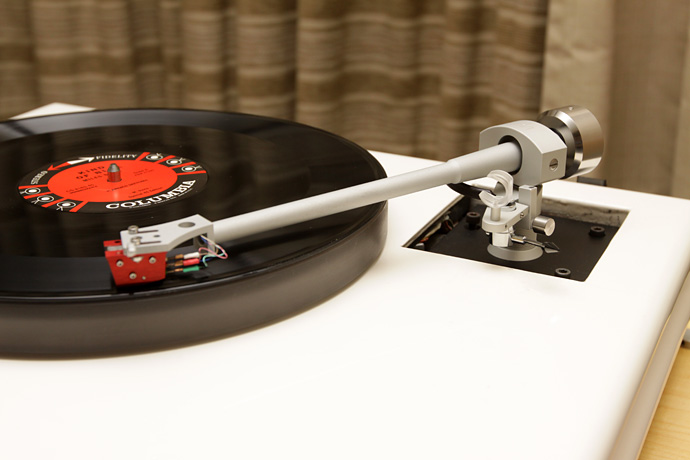 At the other end of the complexity spectrum, Audio Note UK was premiering their Arm Three V2. There are really three different versions of this arm -- the One, Two, and Three, which differ from each other by the type of internal wiring used. The One employs copper wire, while the Two uses silver AN-V wire. The Three is wired with silver AN-Vx.

Audio Note used to purchase Rega RB300 arms and rewire them with its own wire, but the company decided to take the plunge and manufacture its own arm from scratch. The V2 arm, which continues to use Rega geometry, features a one-piece arm tube and headshell, which is machined from a billet of solid aluminum. The bearing housing is also machined from solid aluminum. Anti-skating is done via the tried-and-true string-and-weight method.

As I said previously, I have no love for the silver disc, so imagine my glee as I walked the halls noting that many exhibitors were using either a computer and DAC or just a simple turntable. CDs banished to the phantom zone! Hah! 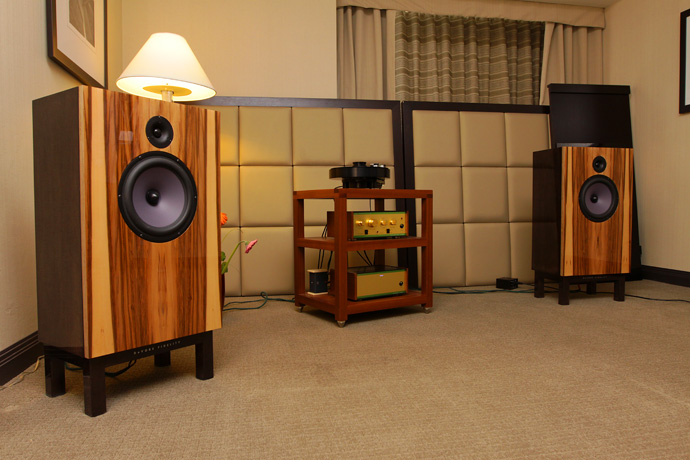 One such example was the Coup De Foudre room, where DeVore Fidelity was playing the production version of the Orangutan-series speaker that I'd first seen at CES. The $12,000 Orangutan O/96 Oscar is a two-way speaker that's (surprise) 96dB efficient. That high efficiency makes the speaker a perfect match for the absolutely adorable $3795 Leben CS300X(S) integrated amplifier, which uses my all-time favorite tube, the EL84. The Leben puts out a modest 15Wpc, which is plenty for the O/96 Oscar. 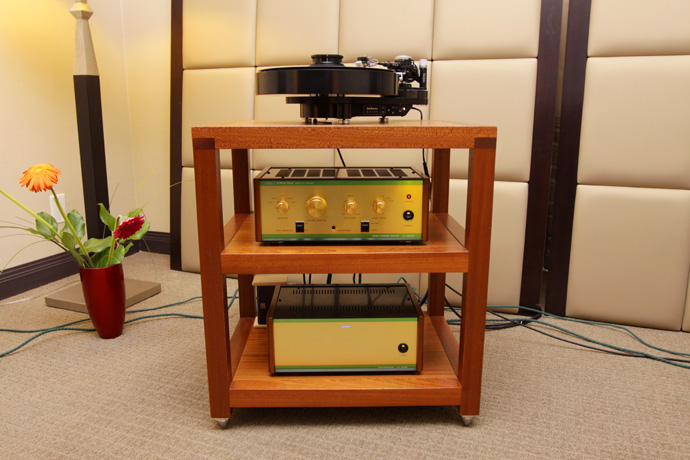 Leben also supplied the phono stage, the $2795 RS-30EQ. The Brinkmann Bardo turntable, which retails for $7000, was fronted by an EMT TSD-15 cartridge mounted on a Graham tonearm.

This system was modest looking, though not exactly cheap. But it had a rich, accessible sound to it, one that put the emphasis on fluidity, pace, and depth rather than pinpoint imaging. I could easily see myself relaxing into this system with the windows open on a cool spring evening. I listened to a couple of jazz pieces and found myself experiencing the ebb and flow of the music without feeling the need to analyze each note and instrumental line. This was a system for music lovers, not equipment hounds. 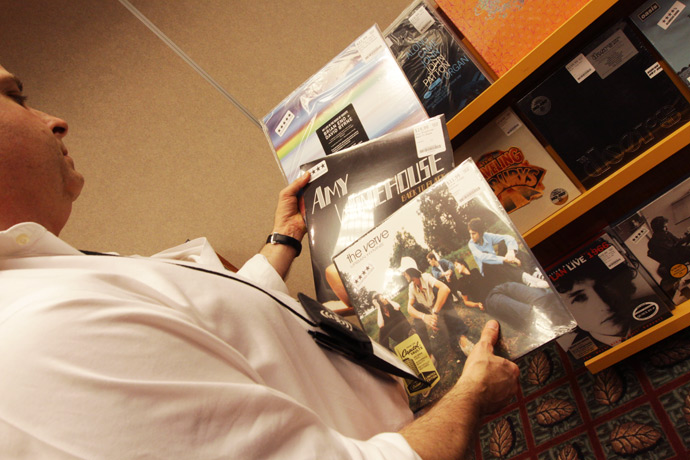 The LP market has loosened up of late. For a number of years you could get only jazz or classical reissues, with a bit of audiophile fluffery thrown in for good measure. Things are way better now. I stopped by at the booth run by Aux 33 Tours, a Montreal record store, and took a quick look through their LPs. The selection was staggering. All of the audiophile chestnuts -- the Mobile Fidelity and Classic Records reissues -- were there, but they also had real records for sale. Slayer and Metallica for the metalheads. Tom Waits for those so inclined. Byrne and Eno's My Life in the Bush of Ghosts on a double 180-gram LP at $19.99, for crying out loud! Tom Petty and the Rolling Stones box sets. So much selection, and much of it for just a touch more than a downloaded album. 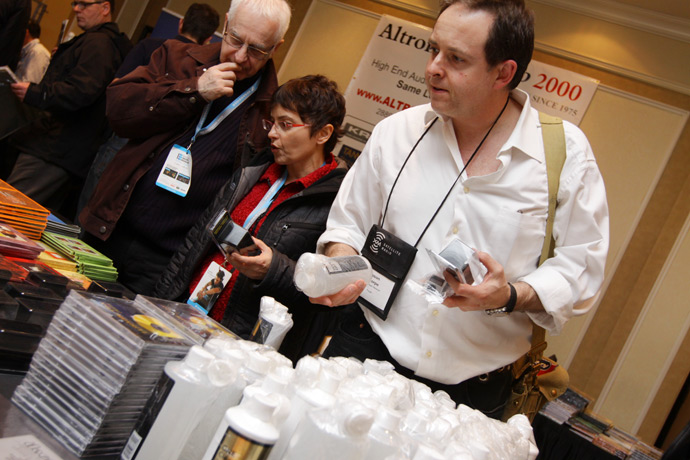 There was more over at the Liberty Audio bazaar. For those who aren't in the know, May Audio became Justice Audio, which metamorphosed into Liberty Audio. Why? Beats me. But Liberty Audio wasn't just retailing a whole bunch more LPs; they also had a boatload of analog accessories for sale, including the elusive Mobile Fidelity record brushes, Nitty Gritty cleaning fluid, and tons of different ointments and jellies for your stylus.

It was all here, under one roof. What a blast. Montreal's a wonderful city to spend a weekend in. Why not head out next year and make a holiday of it?