What a Strange Way to Do Business

By far, the oddest room that I encountered on my first day at the show was that hosted by Lys Audio, a new company from Montreal, Canada.

Now when I walk into a room at a hi-fi show, I expect to see some equipment somewhere in the room. In the case of Lys Audio, I saw only a curtain with a couple of violins suspended from it. The music was playing all right, and at quite high volumes, which was what drew me in (call me shallow). But I didn't see much of anything else. 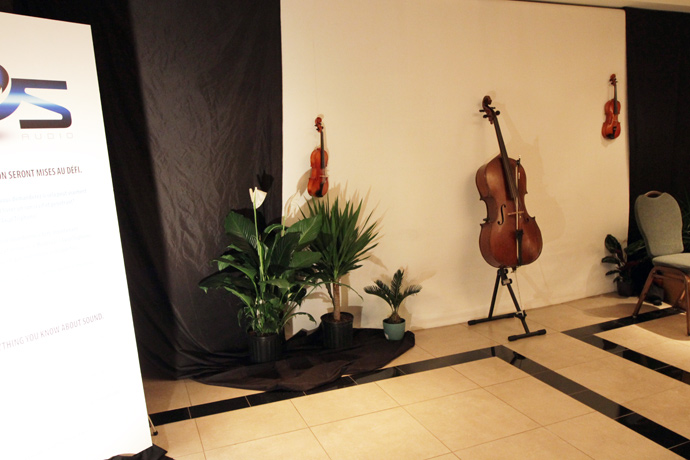 The company's principal scoped me out and proceeded to explain to me that he had unearthed an old technology that allowed his system to derive a center channel from two stereo channels. At this point I was unclear whether his company was selling the speakers that were playing behind the curtain or the processor that was deriving the center channel. I sat back for a listen and was remarkably unimpressed. The classical piece that was playing sounded flat, compressed, and one-dimensional, with little separation between instruments.

I asked the company owner if I could see the speakers and he responded in the negative. He did, however, point out some of the equipment that was in use -- an old Dynaco PAS 3 and a CD player not much more recent. The turntable was a nice, juicy Oracle though. At this point I wasn't getting any useful information so I backed quietly out of the room.

Sometimes I second-guess myself. Was I witnessing an audio revolution as Lys Audio would have me believe? Was I too caught up in my own world to see it? I tracked down Doug Schneider for a second opinion.

Doug waded in and asked some pointed questions, but he didn't have much more luck. He did confirm, though, that the system didn't sound very good at all.

So we were left wondering why a company would take the time and spend the money to present an exhibit that by its very nature would have to stand on the merits of its sound alone, if the resultant sound wasn't very good at all. The last thing I want to do is slam a new company that's trying to launch an innovative product. But in this instance the complete lack of any obvious product and mediocre sound to boot confounded me utterly.