It bothers me every year -- the politeness and the banality of the music at these shows. We all like solo cello and Diana Krall -- don't we? We all understand that exhibitors want to draw in as many people as possible by avoiding abrasive music that'll drive away showgoers. Fair enough. But still, when I walk by a room and hear Led Zeppelin or Pink Floyd playing at higher-than-usual levels, I invariably stop in my tracks and march right in. So do lots of other folks, by my observations.

So why don't we hear more fun, accessible, real music at shows? And why don't exhibitors crank up the volume a bit? I mean really, what's the bloody point of owning big-ass speakers if they don't rock out? Dynamic snap and ease at high volumes without hardening up -- that's what it's all about, baby. 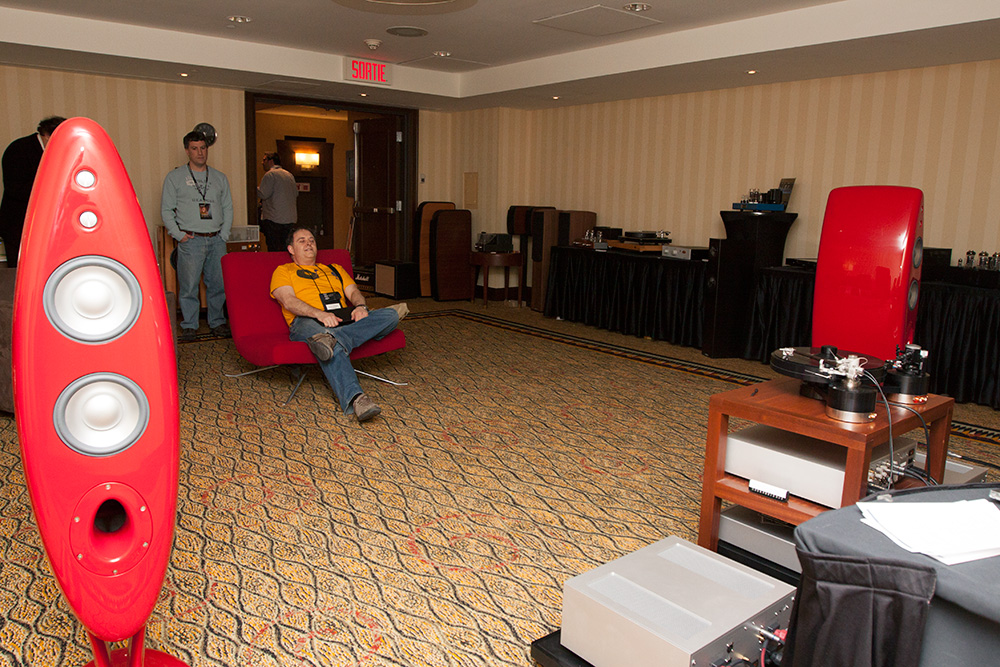 Doug and I were sitting in the Coup de Foudre room listening to the Vivid K1 speakers ($32,000 CAD) driven by a pair of Luxman M-600A stereo amps ($11,500 CAD each) and fronted by Luxman's C-600f line stage ($11,500 CAD) and a Luxman DA-06 DAC ($6500 CAD). The system was playing at a reasonable level that we could easily talk over, and Doug mentioned that the Vivid tweeter and midrange were quite rugged and have seen use in pro-audio setups. "So they'll go quite loud then?" I asked.

"Oh yeah, you bet," he replied. I then beckoned Philip O'Hanlon over. "Put on something dynamic, Philip," I said. "I mean really dynamic."

Philip "Always Ready with the Perfect Music" O'Hanlon cued up MJ's "Billie Jean" and turned the volume up a couple of notches. He looked over at me and raised his eyebrows to query whether the level was right. I gestured for him to turn it up more, and he complied. We repeated this procedure several times until it was Really Freakin' Loud. Louder, in fact, than I've ever heard at an audio show. Curiously, the room began to fill up.

Doug was right. The Vivids showed no sign of strain, retaining their composure and refraining from any sort of treble hardening. I would wager that the tweeter has a fairly easy ride, crossed over to the dome midrange at a high frequency, and that reduces its propensity for distortion at high levels. Whatever the reason, it sounded great and was an absolute hill of fun to listen to.

We've got ourselves a game, I thought to myself. "Let's go check out the Tannoy Westminsters," I said to Doug. "I want to see how loud they'll go." 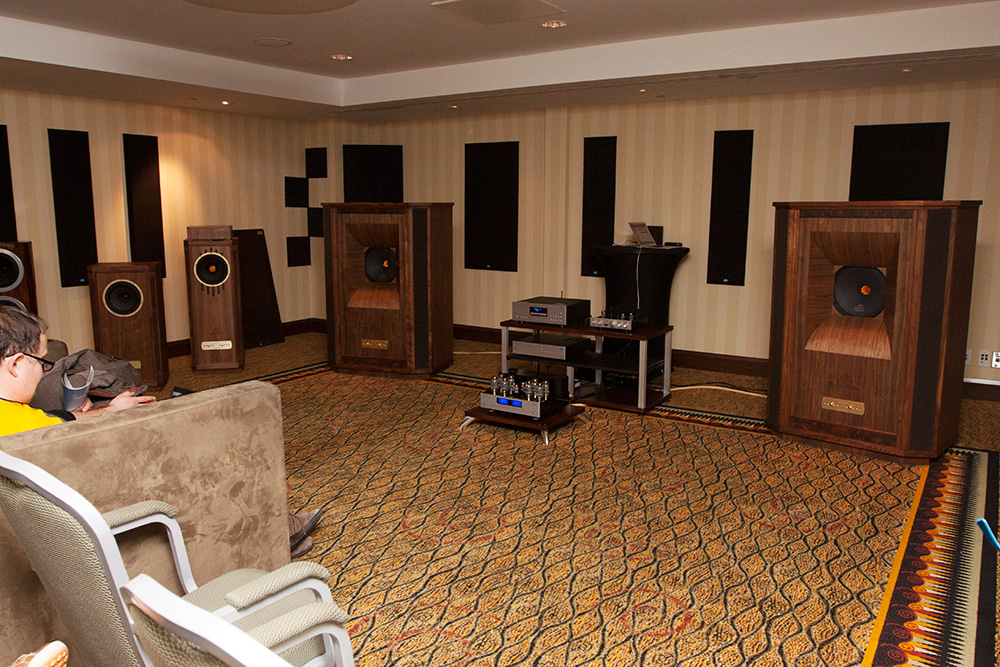 At first the chaps in the Tannoy room didn't really understand what we were trying to accomplish. Some negotiation ensued and we settled on AC/DC's Back in Black, but they were having server troubles and couldn't find it, so we decided that ZZ Top -- at the opposite end of the Album Artist alphabet -- would make a fine substitute. "I'm Bad, I'm Nationwide" isn't as cleanly recorded as "Billie Jean," but it's an exciting, amiable song, and as the Tannoy rep throttled up the volume, once again the room filled up with showgoers. I gestured to turn it up further, and he looked at me as if I were insane.

It's a glorious madness.

The big Tannoy Westminster GR speakers ($50,000 CAD/pr.) were made for this type of abuse. Driven by a Cary CAD-120S MkII amp ($5995 USD) through a Cary SLP-98L ($4495 USD) and DMC-600SE ($7995 USD), they didn't sound as controlled and refined as the Vivids, but in return they offered a juicy, dynamic, human sound that added a little crunch and life to the music. I could sense the top end hardening up a little, but really -- it was ridiculously loud. Perhaps even damagingly loud. 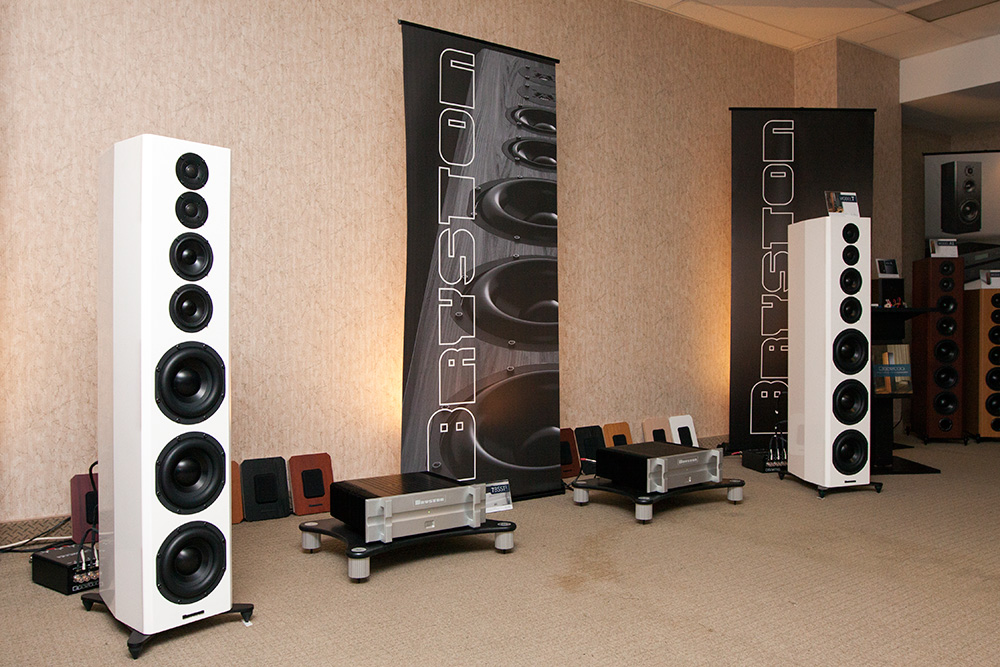 Continuing our sport, Doug and I headed over to poke the bear in the Bryston room. James Tanner was sitting in the right-most of three chairs, which is where he always holds court. At first James seemed like he'd comply. He cued up a Daft Punk track and turned up the volume a bit. The Bryston Model T Signatures ($7495 to $8495 USD, depending on finish), driven by a mono pair of 7B SST2 amps ($5100 USD each) and fronted by a BP26 preamp ($4695 USD) and a BDA-3 DAC ($3195 USD) and BDP-2 player ($2995 USD), seemed like the perfect competitors, but there were a couple of older gents in the room, and I think Tanner didn't want to offend them, so he declined my repeated volume-raising gesticulations. It was too bad, really, as the Model T is a wonderful-sounding speaker, and its dual midranges and tweeters seem custom designed for just these sorts of antics.

As a takeaway from this experiment, I realized that real-world music -- played at realistic concert levels -- is far from a room-clearing activity. But it's the type of thing that should be used judiciously. If every room were screaming out high-level rock music, it'd get old real quick. But when a showgoer asks for some loud rock and roll, it's in an exhibitor's best interests to accommodate. If, that is, the system can handle it.