The fact that The Home Entertainment Show Newport 2018 is even happening comes as a welcome surprise to Southern California audiophiles. After the show’s founder passed away in 2016, the show organizers split into warring camps. One started the Los Angeles Audio Show, which took place in June 2017 and was generally considered a success. T.H.E. Show 2017 ended up being cancelled due to lack of interest. But when the organizer of the 2018 LAAS abruptly cancelled that show last month, Maurice Jung, who ended up owning T.H.E. Show, quickly put together a 2018 event, from June 1 to 3 at the Marriott Irvine Spectrum in Irvine, California.

Luckily, I was able to get down to Irvine, which is south of Los Angeles, to take in a few hours of T.H.E. Show. Not surprisingly, it wasn’t large -- two floors with perhaps eight to ten displays, plus a few large ballroom displays on the first floor and a ballroom with about 25 small exhibits. But it was amazingly well organized given the tight time frame, and I found a surprising amount of new gear I hadn’t seen or heard before. 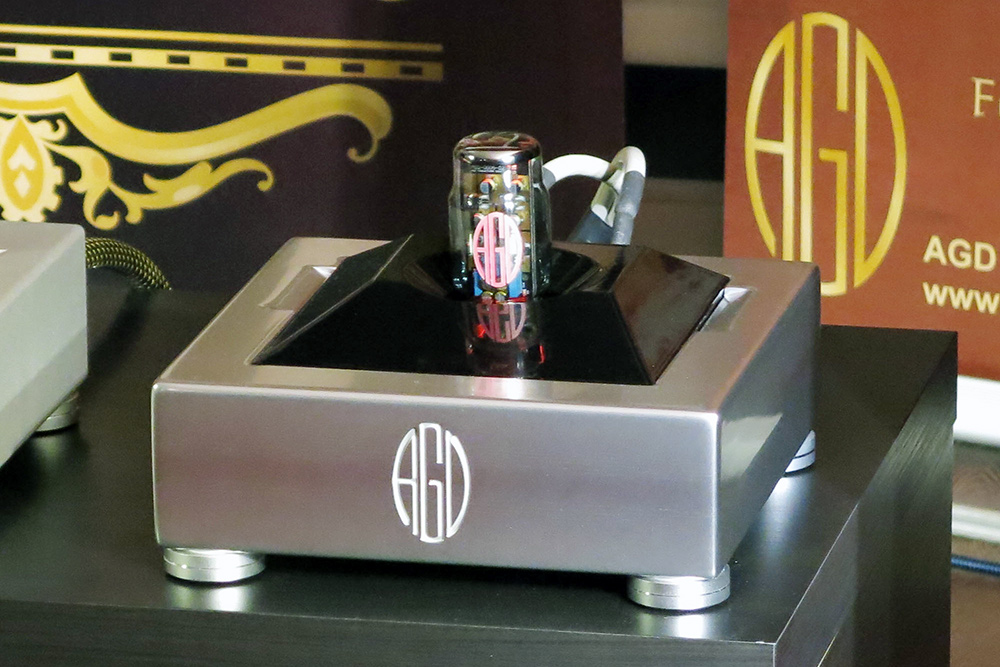 I thought AGD’s Vivace monoblock amp ($15,000 per pair) was one of the stars of T.H.E. Show, but I bet it would have gotten attention even at a huge show like Munich’s High End. The class-D amp packs the core of its electronics into an enclosure styled to resemble a vacuum tube . . . 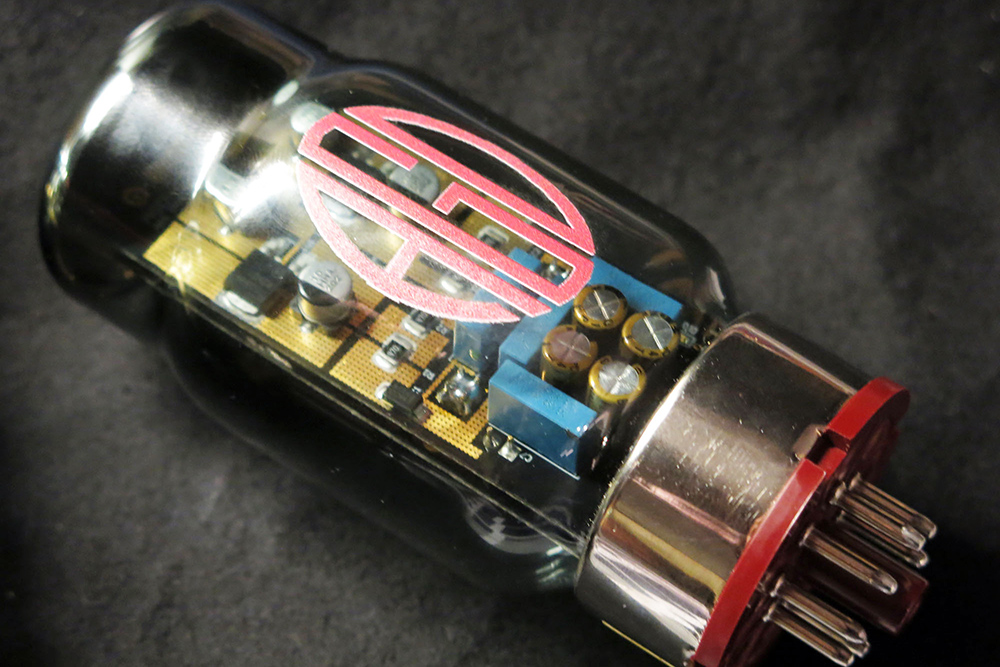 . . . which you can see in closeup in this photo. Company founder Alberto Guerra admitted that he did it largely for the sake of visual aesthetics. “Otherwise a class-D amp just looks like a box,” he said. The amp uses gallium nitride MOSFET output transistors, which Guerra says switch faster and allow the amp to have a noise floor in the -120 to -130dB range. Power is rated at 200W into 4 ohms. 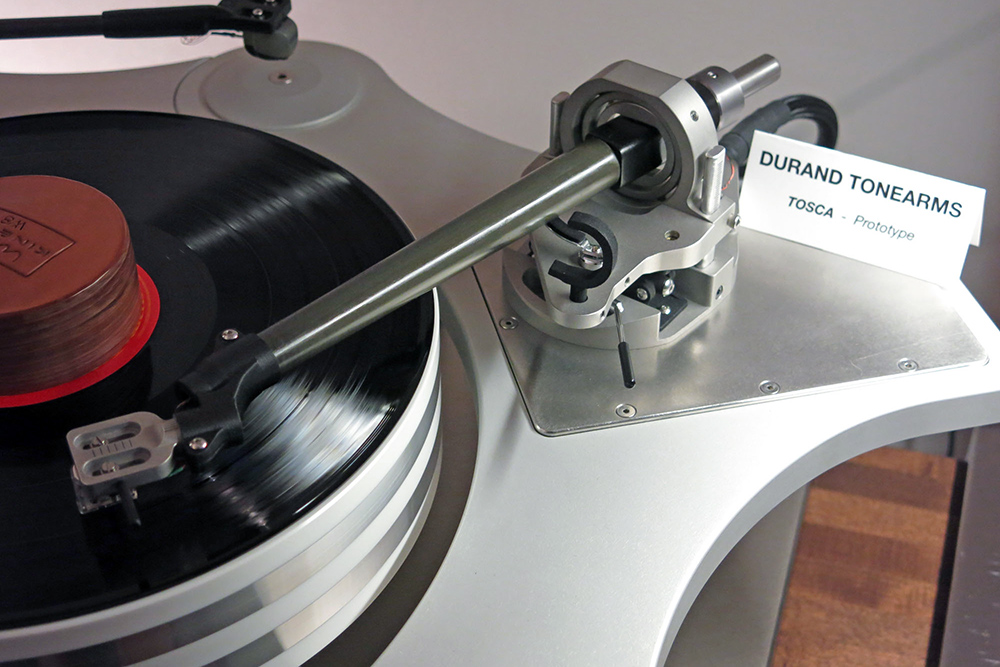 T.H.E. Show marked the world premiere of one of the coolest tonearms I’ve seen. The Durand Tonearms Tosca is the company’s first gimbaled design. The azimuth is adjusted at the headshell instead of at the base of the tonearm, and because of the unique design of the headshell, the adjustment takes place in the same plane as the cantilever. Vertical tracking angle is adjusted through a screw near the base that raises and lowers the entire tonearm using a mechanism similar to a car jack. It’s still in prototype form, and price is listed as “somewhere between $1 and $1,000,000.” 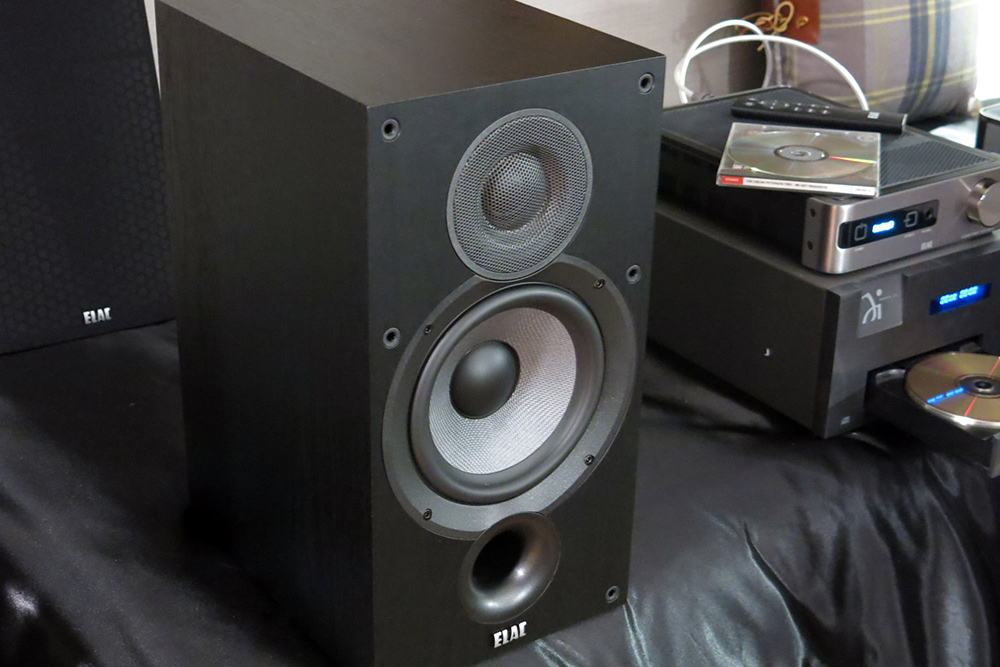 “It’s the least expensive speaker at the show!” proclaimed Randy Wilson, owner of rep firm I Rep Green, which handles Elac in Southern California. Indeed, the latest of the company’s Andrew Jones-designed speakers, the Debut 2.0 B6.2 two-way ($299 per pair), was much more affordable than most of the other speakers I saw -- but it still delivered some of the best sound I heard at the show. Its 6.5" aramid-fiber woofer blended beautifully and seamlessly with its 1" soft-dome tweeter; I wish I could have listened longer. 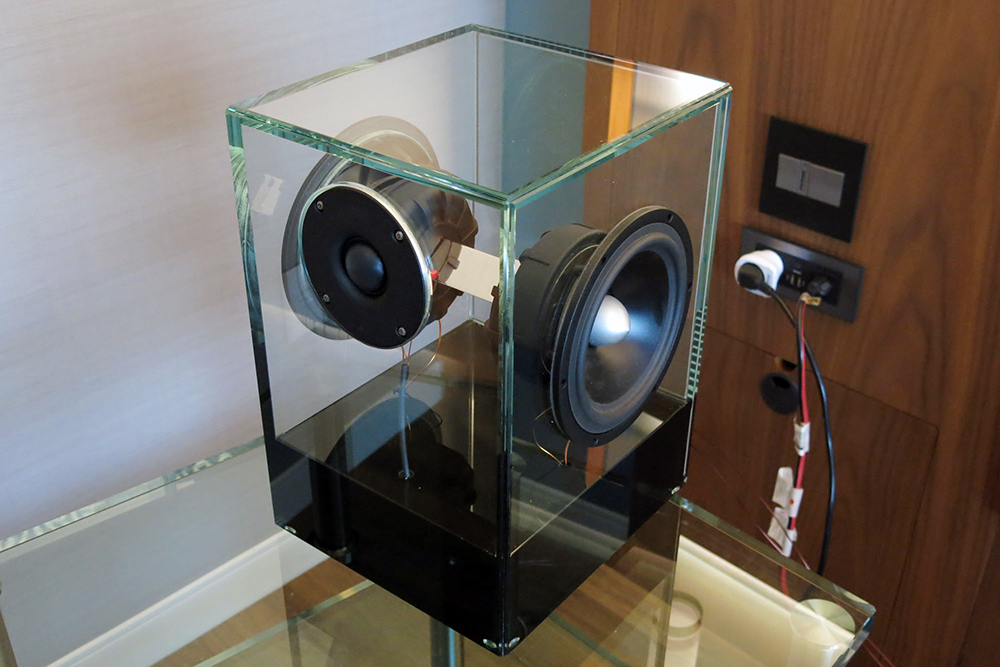 Perfect8’s Cube S ($18,000 per pair) is unusual in many ways. The only front-firing driver is a 1.25" dome tweeter. A 6.5" midrange-woofer fires from each side. While other Perfect8 speakers I’ve seen hide their crossovers in separate enclosures to maintain a clean look (which matters if your enclosure’s made from glass, as Perfect8’s is), the Cube S hides its crossover in a blacked-out section in the bottom. 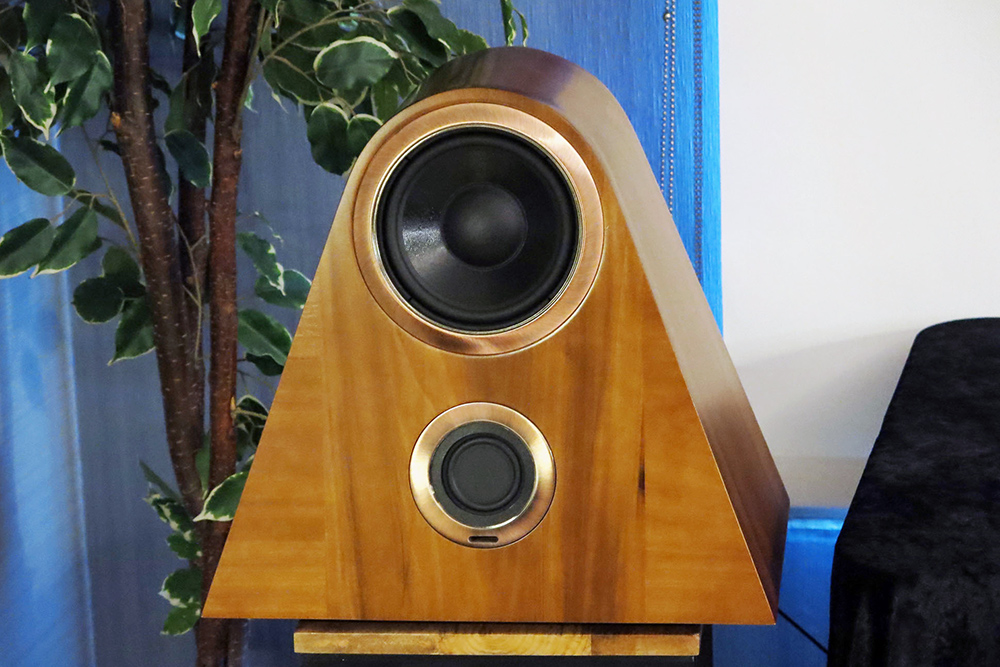 The Rembrandt Laboratories Model V ($3500 per pair) shows some fresh and smart thinking. The midrange-tweeter is a distributed-mode planar driver similar to the NXT drivers used in a few other speakers. Because it covers the range from 200Hz to 20kHz, it requires no crossover. The 6.5" woofer is low-passed at 200Hz. Each of the active speakers incorporates a class-D amp said to be rated at 300W but running at a maximum of 67W to keep distortion below 0.1%. 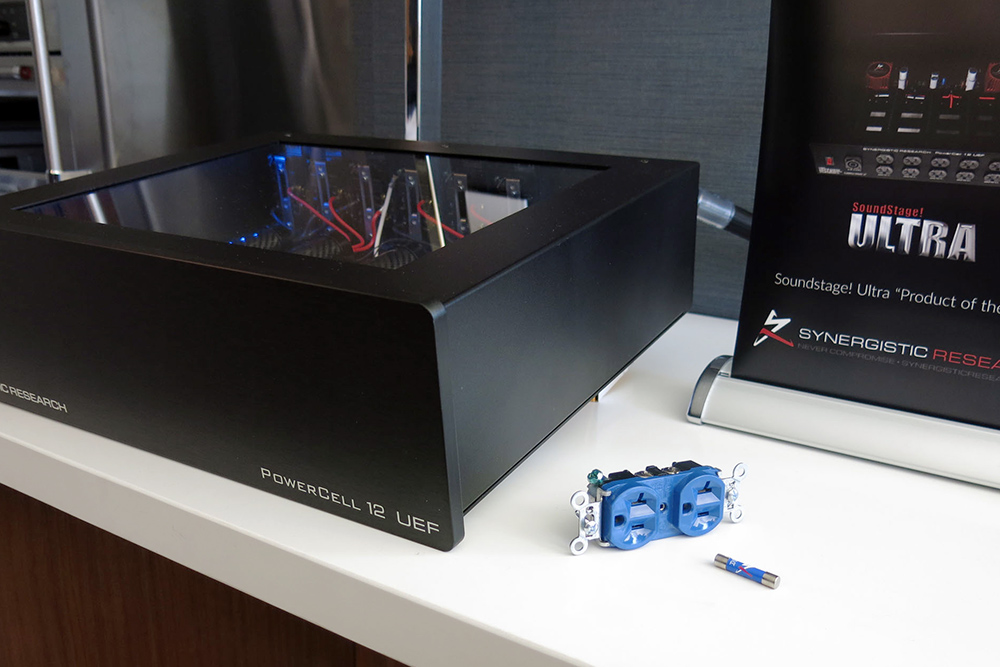 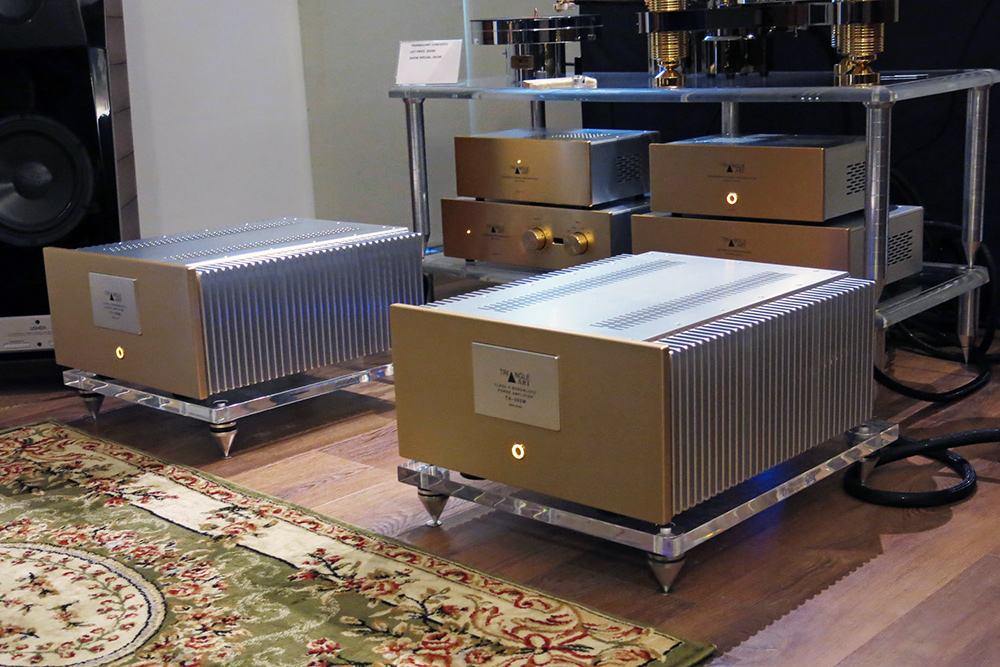 Triangle Art’s new TA-200M solid-state monoblocks ($73,000 per pair) run in pure class A. With 40 bipolar power transistors per amp, the TA-200M is said to deliver 125W into 8 ohms or 250W into 4 ohms. Balanced XLR and unbalanced RCA inputs are provided on the back.