All of the audio components selected for TWBAS 2012 have a few things in common: Their designs are based on sound engineering principles, they’ve been developed with great care by passionate people, they’re made by companies with impeccable reputations, and, most important, each is the result of its designers’ desire to further push the edge of the art of audio reproduction. And all of these components share one other attribute: without great recordings of great music to play through them, they’re nothing more than expensive sculpture.

So, in conjunction with TWBAS 2012, the SoundStage! Network is releasing its very first demonstration album. Just as a loudspeaker can sound its best only when driven by a top-notch amplifier, the demand for quality runs all the way back up the signal chain, past the source component, to the recording being played. We applied the same criteria to the selection of a recording label as we did to selecting the equipment for TWBAS, and are very pleased to be partnering with 2L to bring the ultimate sonic performance to the TWBAS 2012 system, the reference systems of all of our reviewers, and to our many thousands of loyal readers. 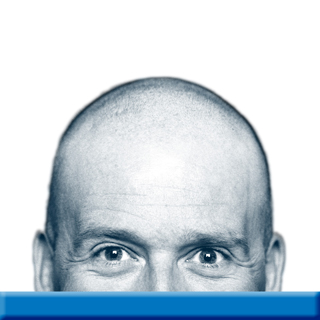 The first L in 2L stands for Morten Lindberg, the principal behind the label. The second L is for lyd -- the Norwegian word for sound or audio. Lindberg’s mission for 2L is to showcase Norwegian composers and artists, as well as a certain aesthetic he calls "The Nordic Sound." Beyond that, he recognizes few boundaries when choosing what music to record. Lindberg draws heavily from the usual classical repertoire, but also embraces a variety of other genres, from contemporary compositions to traditional and folk music. His background in trumpet and choral performance led him to classical recording even as most of his classmates were training to become recording engineers for pop music, and that background still influences his musical selections.

Lindberg thinks that the role of an audio engineer is to create as well as to capture. He prefers to record in venues with spacious acoustics: large concert halls, churches, and cathedrals, of which there is no shortage in Norway. "These venues are actually where we can make the most intimate recordings," Lindberg says. "The qualities we seek in large rooms are not necessarily a big reverb, but openness due to the absence of close reflecting walls." He says that the greatest challenge in creating a recording is to shrink to the dimensions of a typical living room the sense of space audible in the sort of venues where we’re accustomed to hearing such music in concert. 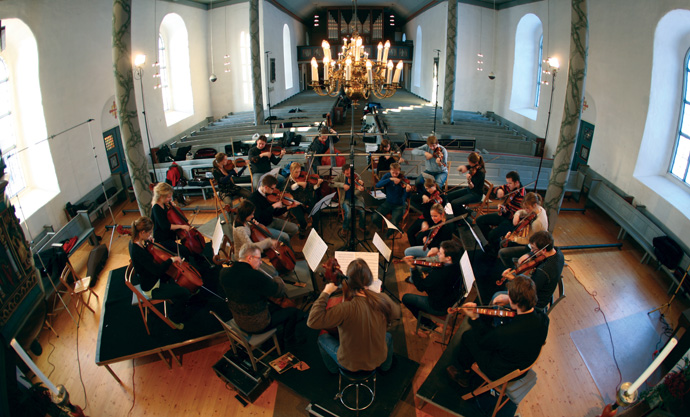 Reducing this scale and volume without losing the intensity of the performance is no easy feat. It usually takes four to six days of intense recording sessions to produce a 60-minute release. "In credit of the musicians, I need to say that this is not in need of getting the score right, but in order to bring forward the right mood and dimensions," Lindberg emphasizes. He summarizes his approach by saying, "There is no method available today to reproduce the exact perception of attending a live performance. That leaves us with the art of illusion when it comes to recording music. As recording engineers and producers, we need to do exactly the same as any good musician: interpret the music and the composer’s intentions and adapt to the venue where we perform -- and sometimes a lie can be more beautiful than the truth." 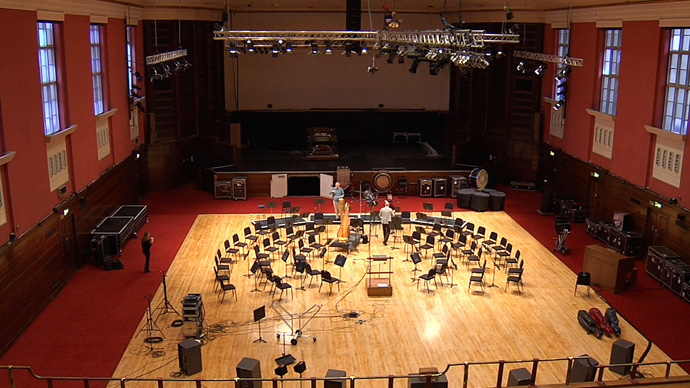 In other respects, though, Lindberg is unwilling to accept anything but the truth. He mainly works with DPA microphones, which he believes give a very neutral and accurate sound when used in acoustic environments. For his multichannel mixes, each mike is run into its recording channel with no additional processing of any kind. For a two-channel stereo recording Lindberg might use only the front left and right mikes, or he might add a little bit from the surround mikes for spaciousness, or use an additional pair of dedicated mikes -- whichever sounds best.

Currently, 2L records everything in Digital eXtreme Definition (DXD), the trade name of a 24-bit/352.8kHz PCM format. According to Lindberg, "In DXD we find the shimmering brilliance from the original analog source as directly from the microphones." The Pyramix workstation (from Merging Technologies in Switzerland) that 2L uses digitizes the incoming analog signal with a 5-bit delta-sigma converter running at 2.8224MHz. Since there is no standard format for saving, editing, or playing back such a bitstream, it must be converted to PCM. With such a system, the noise floor begins to rise above about 50kHz, due to the noise shaping necessary for the delta-sigma converter. Decimating to 352.8kHz is not about preserving ultra-high-frequency information per se -- which is, in any case, buried in the noise -- but retaining the excellent impulse-response characteristics of the original digital signal. The 24/352.8 master can then be used in postproduction with all of the PCM-based tools that have been developed over the past several decades.

2L uses Weiss Saracon software to convert the 24/352.8 master to 24/192 (or other sample rates) for release as a download and on Blu-ray Disc, as well as to DSD for release on SACD. The following graphs show the frequency content of a typical DXD recording, as well as how much of that frequency content can be preserved at the sample rates of some various distribution formats. 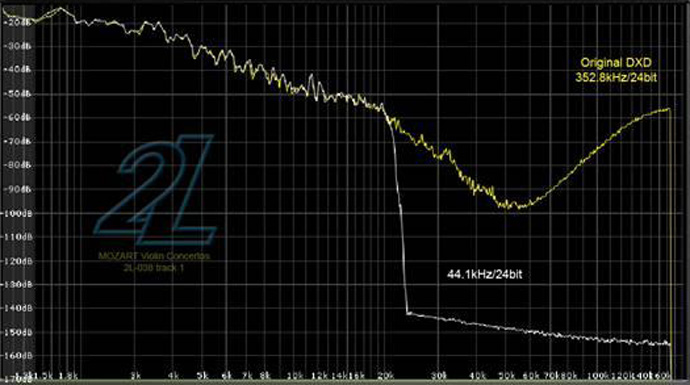 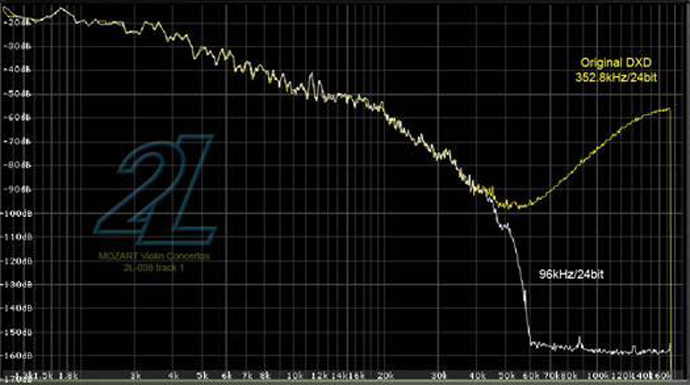 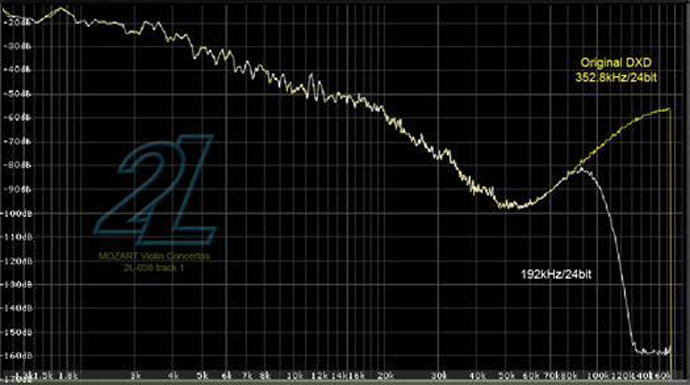 The recordings included in this sampler were chosen by members of the SoundStage! Network staff as being among our favorites from recent 2L releases -- as well as some brand-new selections from full-length titles that will be released later this year. You’ll hear ensembles varying in size from a solo piano to a full orchestra. Some recordings are meant to bring the performers into your listening space; others will make your front wall seem to disappear as they virtually transport you to one of those large Norwegian churches of which Lindberg is so fond. We think you’ll like them as well. The selections were chosen not only for their spectacular sound but also because we find them musically compelling -- because a real demonstration-quality recording is not mere gimmicks and effects.

It’s time you heard how good your hi-fi can sound.