If you read “Shunyata Research and the Power-Cable Tryouts -- Part 1” when it was first published in early January, then you will know that I am about a month behind with this article. In that first part, I wrote that I installed Shunyata Research Venom PS8 power distributors, Venom HC power cords, and Venom Defender noise suppressors in my system and that you should “check back for an update toward the end of this month to find out how it all performed.”

I’ll cut to the chase on why the delay occurred: CES 2016 came right after that article and took about a week and a half out of my life; I had many other articles I had to write, including a couple of lengthy reviews; and I was involved in the production of a couple more SoundStage! InSight videos, including one on GoldenEar Technology’s new Triton Two+ and Three+ loudspeakers, which we put on YouTube the other day. I was working very hard the entire time, just not on this article. I mention this only because I don’t want anyone to think there was anything wrong with the Shunyata Research products after I installed them -- in fact, the opposite occurred. 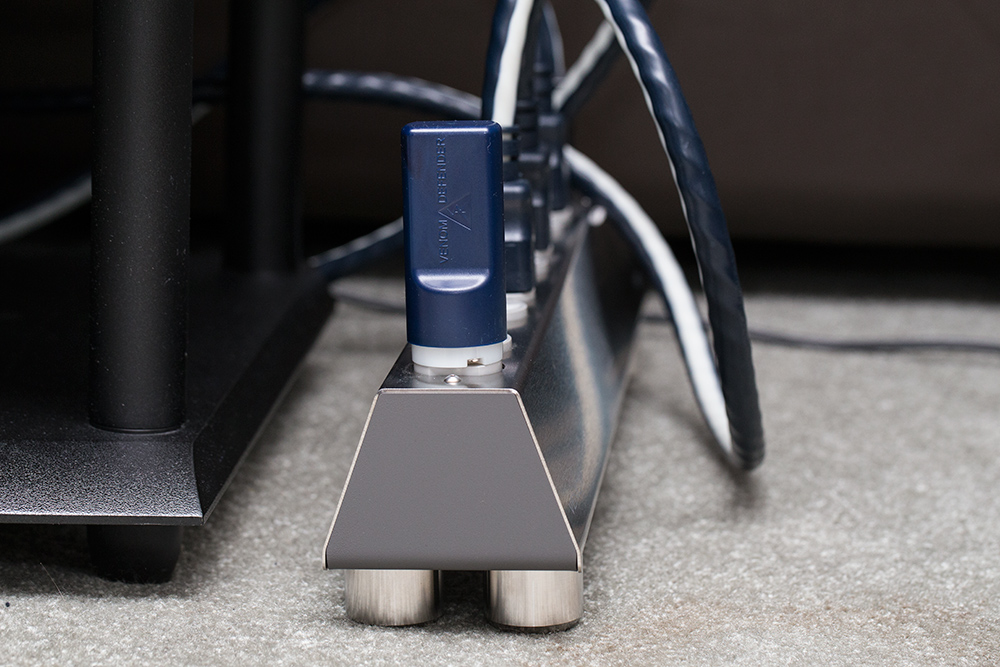 After I connected the various Venoms, I immediately noticed significant and surprising improvements with my system. But before I get to what the improvements were exactly, let me tell you where the Shunyata Research products were and weren’t used. Two Venom HC power cords connected the two PS8s to the wall receptacles (these two power cords I had Shunyata make longer to make sure they reached my wall receptacles), I used a single Defender with each PS8 (it plugs into a PS8 receptacle), and I used two more Venom HC power cords (standard 6' lengths) to plug a Hegel Music Systems HD30 digital-to-analog converter and Moon by Simaudio Evolution 740P with the optional 820S external power supply into one of the PS8s. Blue Circle Audio BC204 and Audio Research GS150 amplifiers were plugged into the other PS8, but using their stock cords -- that’s because the BC204 requires a cord with a Neutrik PowerCon connector and the GS150 needs a 20A connector, but Shunyata supplied the Venom HC cords with standard 15A connectors. Still, the amps had the benefit of being plugged into a Defender- and Venom HC-equipped PS8. The only other thing using a stock cord was my Samsung laptop, which was plugged into the same PS8 as the HD30 and 740P. 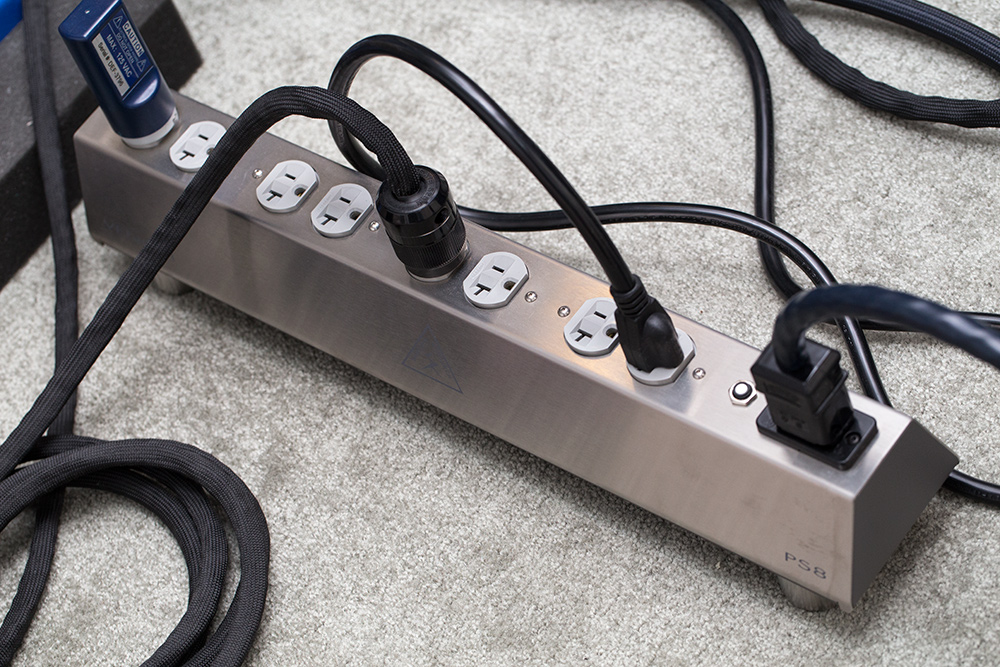 The first improvement had to do with the GS150 specifically, which has a meter on the front that shows the incoming line voltage. With my previous power setup composed entirely of stock power cords and power distributors that I bought at Home Depot and Canadian Tire (the reasons for which were explained in the first article), the needle was in the range labeled Normal, but just a little below the center position. With the Shunyata products installed, the needle was right in the center position, precisely where it should be. I can’t be sure this changed the performance of the amp much, but it did indicate to me that my old setup might have been choking off the power to the amp just a touch, something that I was a little surprised about.

The next thing I noticed was that some hiss and a very subtle buzz I’d always heard regardless of what electronics I was using were now greatly diminished. The hissing and buzzing were still there, but I had to put my ear to within an inch of a speaker to hear anything, whereas before I could detect the sounds from about 6" away. Obviously, these products do help reduce noise.

The final thing I noticed was that it wasn’t only that the hissing and buzzing were diminished -- the entire noise floor seemed to have dropped, letting me hear more deeply into my recordings, which not only allowed me to more readily hear the subtlest details, but really manifested itself in my listening room with noticeable increases in soundstage width and depth. This was very apparent through the Vivid Audio B1 Decades, which are some of the most resolving speakers you can buy and can lay out a vast soundstage about as good as anything I have heard (I was in the midst of reviewing the Vivids when the Shunyata gear arrived). 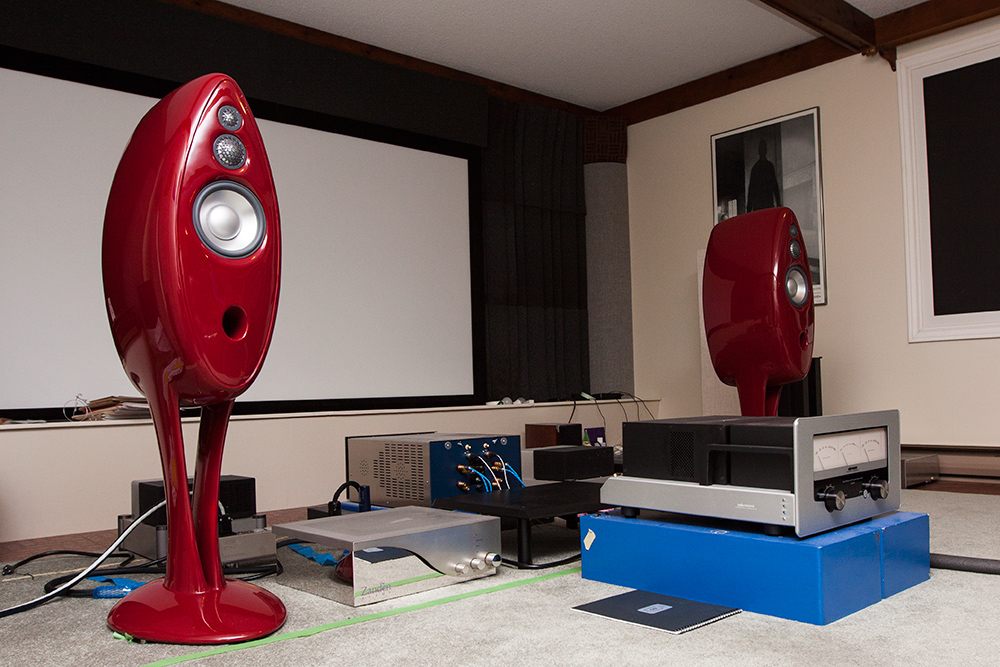 This soundstaging improvement was very noticeable with recordings such as the Cowboy Junkies’ The Trinity Session (16-bit/44.1kHz FLAC, RCA) and Ennio Morricone’s soundtrack to the movie The Mission (16/44.1 FLAC, Virgin), both of which I’ve been using to assess soundstage size and specificity for over 25 years because of how well the spaces of the recording venues were captured. But it was also true of less-spacious-sounding recordings, such as Sade’s Lovers Rock (16/44.1, Epic), an album I love for the music, but not so much for the recording quality -- it’s better than most pop recordings, but still just average by true high-end standards. Insofar as the soundstaging goes, Lovers Rock is far from the very natural presentation of The Mission or The Trinity Session -- it’s basically a mixing-board creation that has good width but comparatively little depth. However, with the Shunyata Research products in the game, things improved. The second track on Lovers Rock, “Flow,” has an interesting stage setup -- Sade Adu’s voice appears in the center of the stage, the drums are behind her, and far left and right are Adu’s backing vocals obviously mixed in (I’m assuming it’s her voice since the CD’s liner notes don’t credit any other singer). The little depth that is there was far more discernible than before, making the distinction between her center-placed vocal and the drums more precise. The stage was slightly wider, even floating further beyond the boundaries of the left and right speakers, and I noticed increased dimensionality to Sade Adu’s lead and backing vocals. The high frequencies also sounded a little tidier, and the presentation had more of an airy quality, which I really liked. In fact, every recording, good or bad, was similarly improved in terms of soundstaging, dimensionality, and high-frequency refinement -- with absolutely no downside whatsoever. Can you really ask for more?

As I mentioned in the first article, a single PS8 is priced at $695 USD, while each Defender is $195. The price for a 6’ length of Venom HC is $295 (longer lengths cost more). To me, these prices are not unreasonable given the build quality of the products and the improvements they brought to my system -- they were not only noticeable, but difficult to do without once I’d experienced them. Having said that, I now consider this setup my “Shunyata Research baseline” for performance.

As I wrote in January, my next step is to replace the Venom HC power cords with ΞTRON Alpha HC power cords and see what happens, then write about it. Priced at $1250 for a 6' length, this power cord is priced quite a bit higher than the Venom HC, so my expectations are commensurately higher. However, I don’t think I’ll write it up as a blog entry here. Instead, I’m impressed enough with what I’ve heard so far from the Venom products that I plan to write a full review of the Alpha HC on SoundStage! Hi-Fi. After that, I might even experiment more with power-related products. Suffice it to say that my curiosity is now piqued.