Here’s the last batch of the most interesting headphones and headphone-related products I saw at CES 2019. Also check out my first and second headphone reports from CES, and watch SoundStage! Solo over the next few months for reviews of some of CES’s most promising new models. All prices in USD. 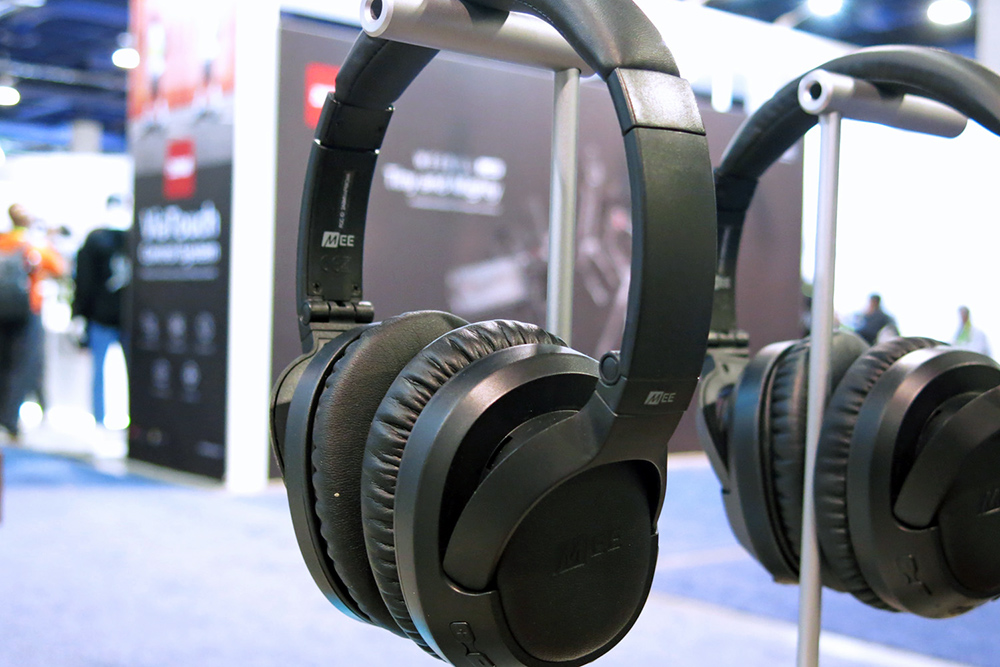 You can listen to music on MEE Audio’s new Matrix Cinema headphones, but they’re really intended more for movie and TV listening. They include aptX Low Latency Bluetooth, to avoid the lip-sync problems created when standard Bluetooth headphones are used for video programming, and a Voice Boost mode that’s said to make voices easier to hear. There’s a model with noise canceling (shown here) for $149.99, and one without NC for $119.99. The company also offers two Bluetooth transmitters with aptX LL . . . 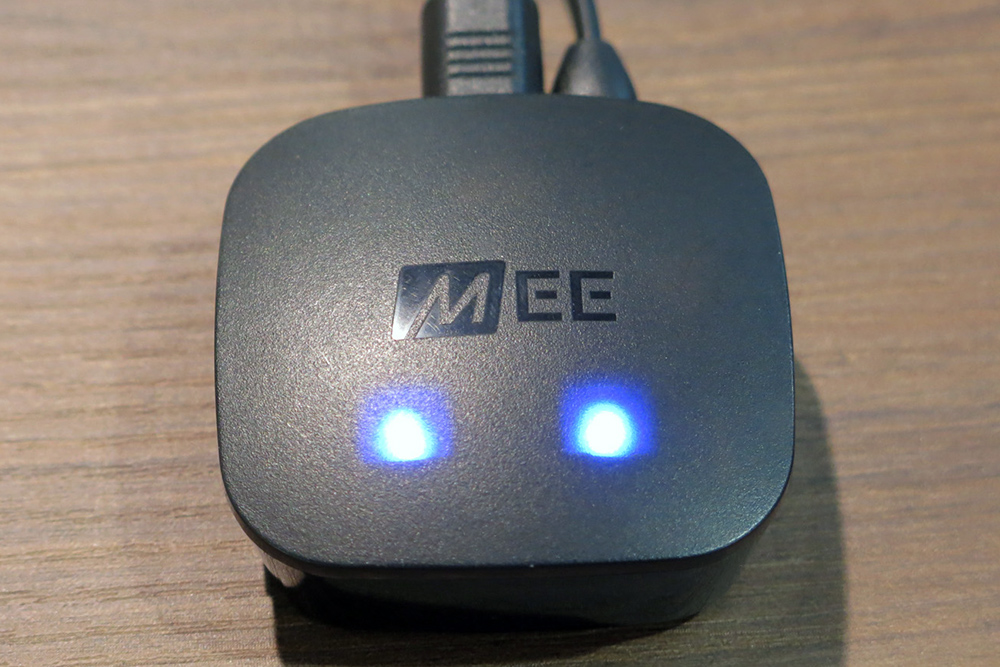 . . . including the $59.99 Connect, which incorporates a rechargeable battery rated for eight hours of run time. That means you can not only connect it to a TV for movie watching but also connect the pocket-sized Connect to an inflight entertainment system, so you can now use Bluetooth earphones without a wired connection option on planes. 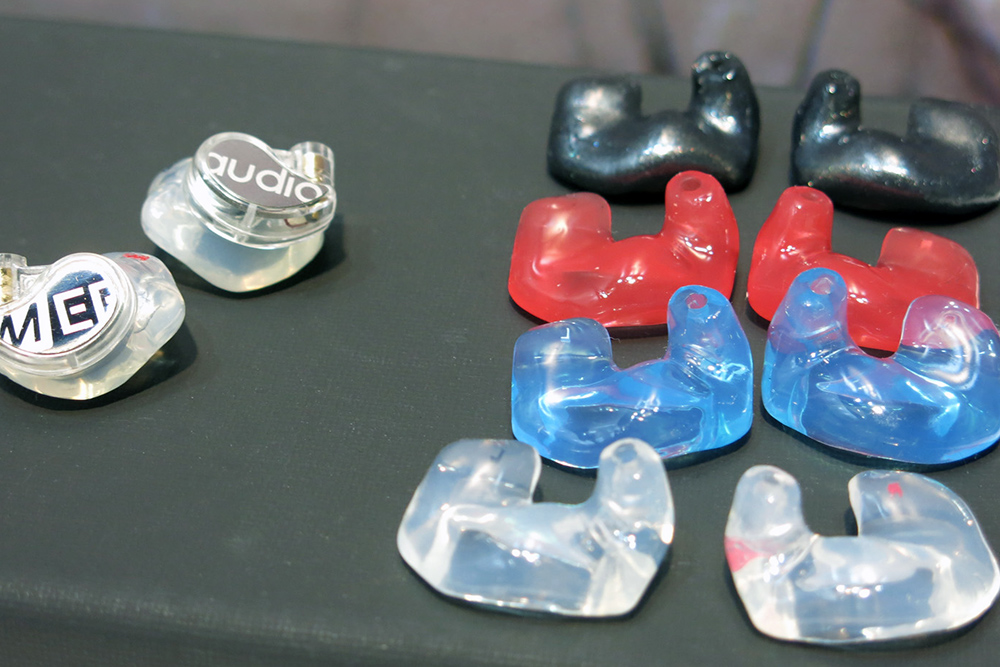 MEE Audio also showed the MX-PRO line, a remarkably affordable approach to custom earphones. All of them ship as universal-fit models with a variety of eartips. If you want to make them custom, just have some earlobe impressions made by an audiologist and send them to MEE; for $150, they’ll send you custom-molded tips that will fit any of the MX-PRO models. The metal plates on the earpieces can also be customized with engravings of your design for $25. Four models are in the line, priced at multiples of $50; the line runs from the $49.99 MX1 PRO, with a single dynamic driver per earpiece, to the $199.99 MX4 PRO, with a single dynamic driver plus three balanced armatures on each side. 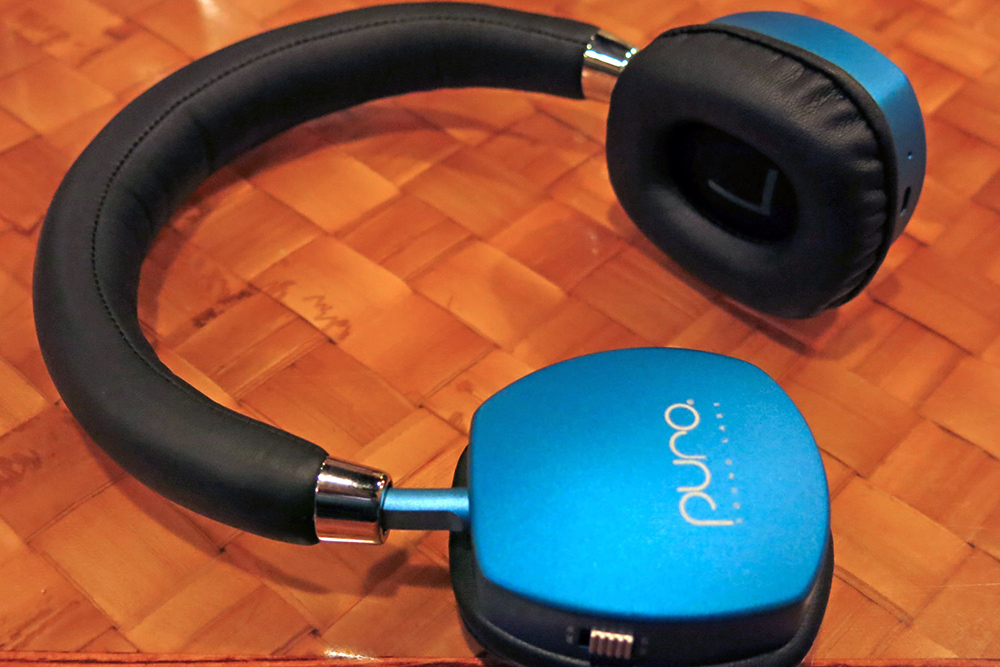 Puro kids’ headphones have volume limiting built in, so they don’t play over 85dB and stand less chance of damaging young ears. The company’s newest model is the PuroQuiet ($199.99), which adds active noise canceling. The idea is that the less environmental noise the listener hears, the less they’ll mind the limited volume. Like Puro’s previous models, the PuroQuiet is tuned pretty close to the so-called “Harman curve,” which researchers at Harman International found to be the preferred headphone response for most listeners. (I’m trying to talk them into making a model big enough to fit adult males, but no luck yet.) 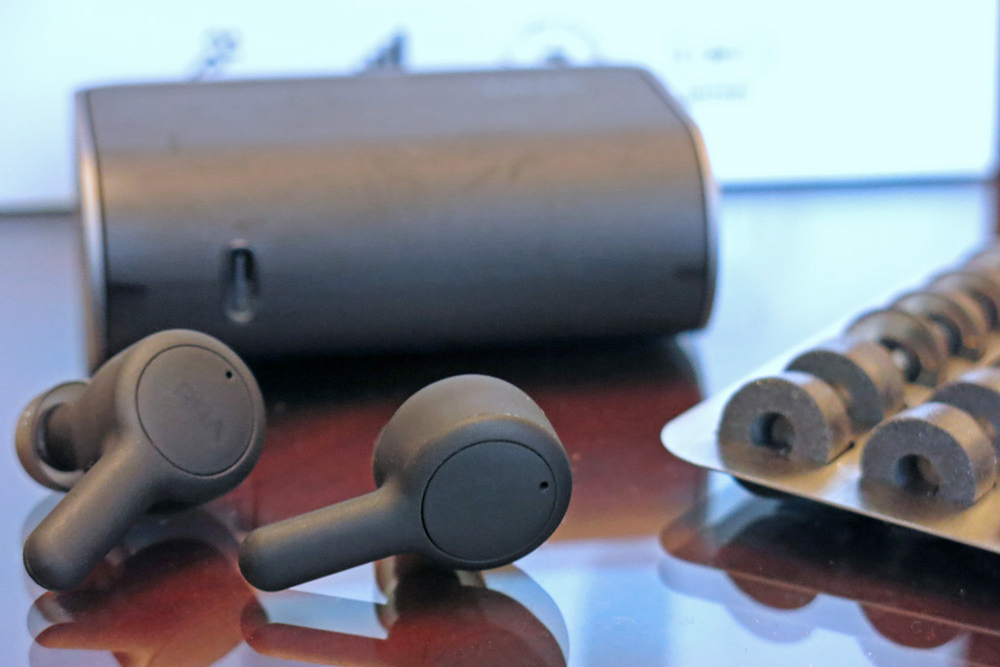 True wireless earphones, which came to prominence two years ago when Apple introduced its AirPods, haven’t won much acclaim for their sound. RHA, known for audiophile-targeted earphones with machined-aluminum enclosures, is attempting to improve this situation with the True Connect true wireless earphones ($169.99). I didn’t get a chance to hear them, but the fact that they come with nine different sets of eartips certainly makes it more likely the listener will get a good fit -- and, probably, better sound. 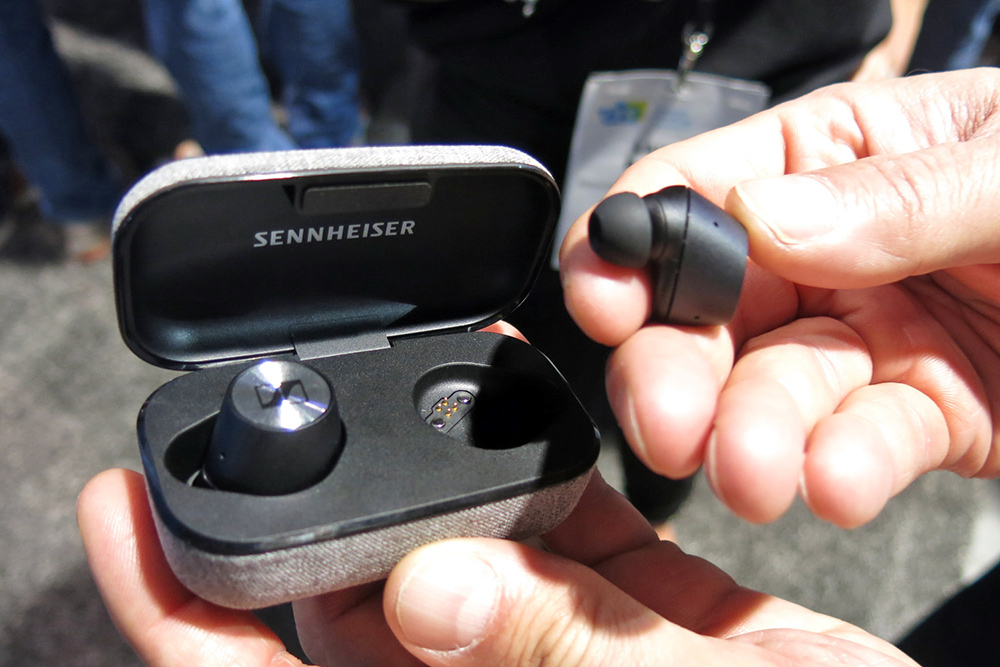 Sennheiser is also attempting to get better sound from true wireless earphones, with the introduction of the Momentum True Wireless earphones ($299.95). The earphones have a “transparent hearing” feature that lets you hear ambient sounds with or without music playback. It’s triggered by touch-sensitive controls on the right earpiece. Using Sennheiser’s dedicated smartphone app . . . 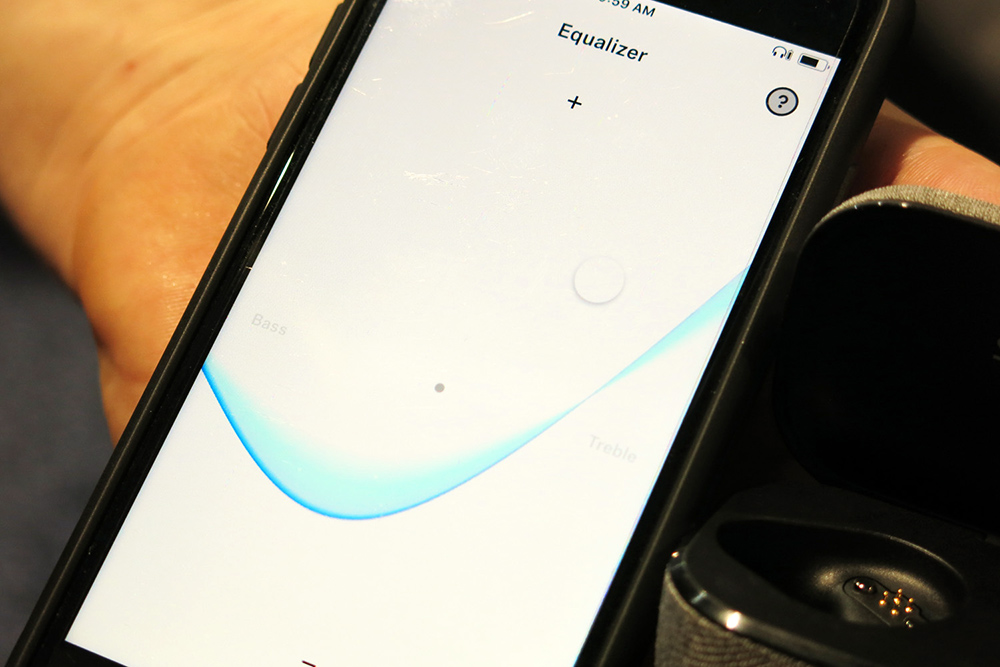 . . . you can easily tune the sound to your liking with a touch. Just tap your finger in the frequency range you want to emphasize or deemphasize, and then drag the onscreen dot around until you get the response curve and sound you want. 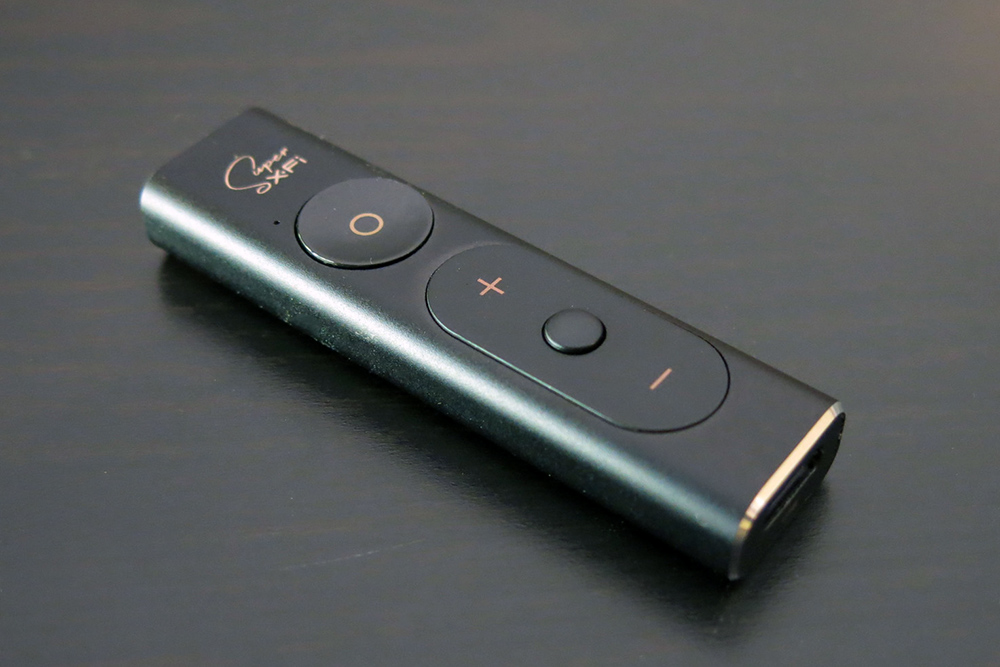 Creative’s Super X-Fi Amp ($199) appears to be intended to deliver the amazing headphone virtualization capabilities of the Smyth Realiser A8 headphone processor, but in a radically more compact design and at about 1/15th the price. In order to process sound so it seems like it’s coming from speakers rather than headphones, you first take pictures of your earlobes and face, then upload them into the Super X-Fi app (available now for Android and promised for iOS). A corrective curve is then created to adapt your headphones for your ears -- and, if they’re among Creative’s new line of Super X-Fi-certified headphones and earphones, correct for the response errors in the headphones or earphones. However, in the company’s CES demo, they used microphones inserted into showgoers’ ears to create the corrective curves, then played test tones through an Elac 5.1.4 surround system. The appointment-only demo had all sorts of technical problems, but for a fleeting moment, it gave me a very strong impression of hearing a 5.1.4 system -- so much so that I had to take the headphones off for a moment to confirm that the sound wasn’t coming from the speaker system. (Unfortunately, some of the other people in the demo seemed to be hearing the center speaker coming from the upper left corner of the room, and I had to leave before they were able to correct the problem.) The Super X-Fi Amp has a USB-C input and a 3.5mm output, and is roughly finger-sized. Perhaps we’ll have more about this someday on SoundStage! Solo . . . 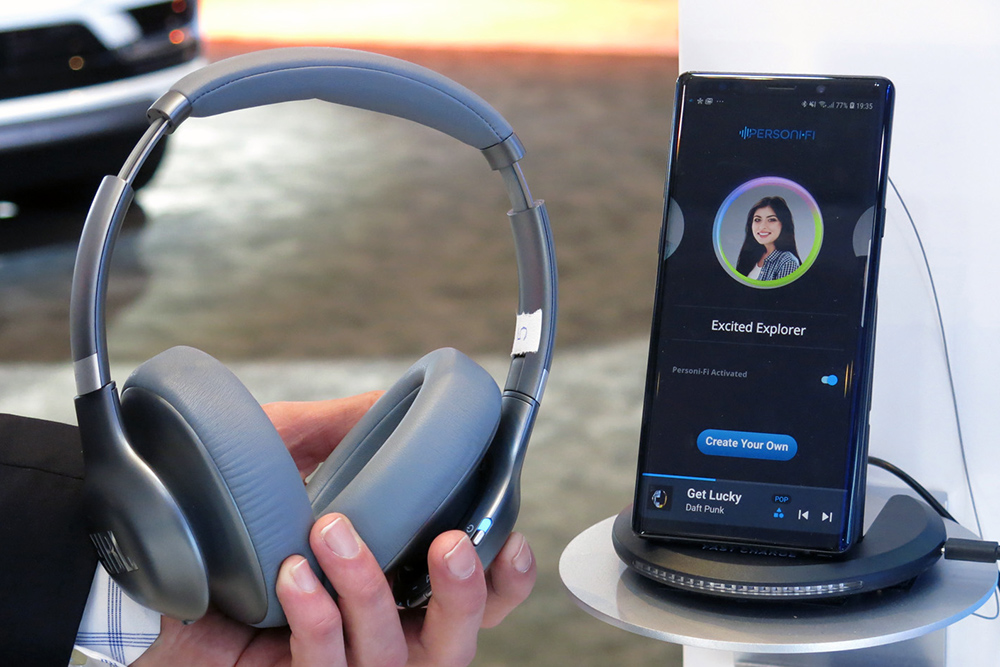 A more successful demo of advanced headphone audio processing took place at Harman International’s exhibit at the Hard Rock Hotel & Casino. There, the company showed its Personi-Fi technology, which allows listeners to create a user profile with a preferred frequency response, then enjoy that same frequency response with all their audio gear. In the demo, I listened to a tune through JBL headphones, and chose one of three sound profiles I liked on a smartphone mated to the headphones through Bluetooth. I then went into a Mercedes sedan, used the same phone to select my preferred profile, and got a very similar sound from the system in the Mercedes. It can also optimize sound in a car for users in different seats, and can even work to deliver better sound in vehicles used for taxis and ride-sharing programs. Harman hopes to have this technology in cars within a year or so.