In June of this year, I attended an interesting product pre-launch event at a unique venue. Let’s take the product first.

Canvas Audio, whose pre-crowdfunding campaign period has just commenced, has created what it calls the world’s first hi-fi OLED television sound stand, also called Canvas. Its creators state that while OLED TVs have dramatically increased in performance, soundbars have not. The Canvas stand is about 15" tall, 4' wide, and 8" deep, and it sports a minimalist Scandinavian design. It aims to complement OLED’s stunning picture quality with breathtaking audio, three-dimensional no less, without the clutter of multiple component boxes or freestanding speakers. 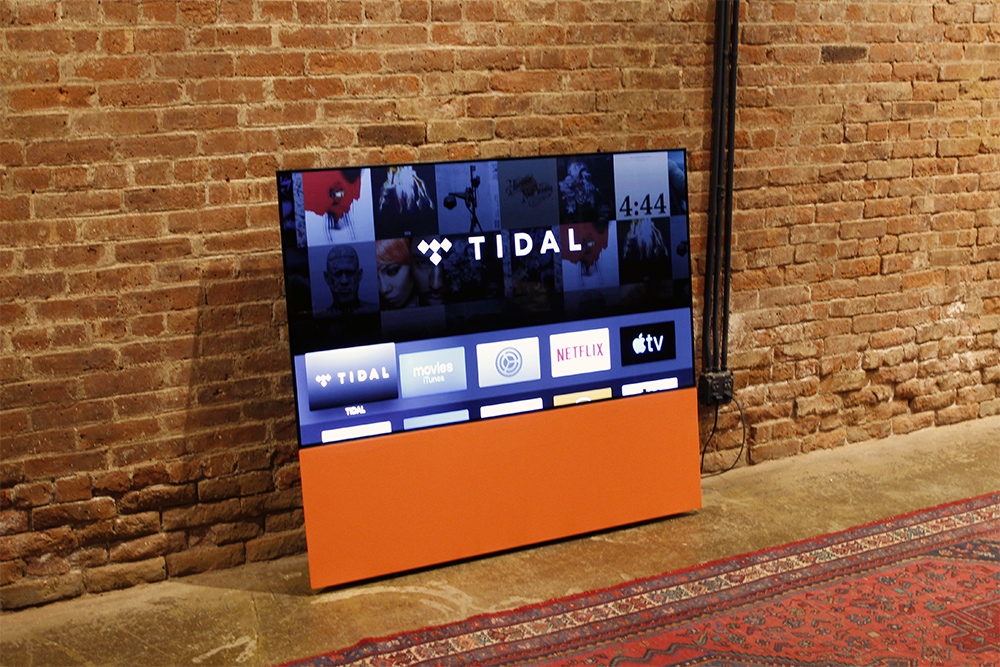 Interaural crosstalk, which plagues virtually all stereo playback systems, occurs when sound from the left channel reaches the listener’s right ear and/or sound from the right channel reaches his left ear. This crosstalk degrades a system’s ability to reproduce realistic aural images. Interaural crosstalk cancelation (IXTC), which is used in Theoretica’s processors, places an inverted and delayed canceling version of the left-channel signal into the right-channel speaker and vice versa, thus freeing images from the area between the speakers, causing them to become much more 3D and realistic. 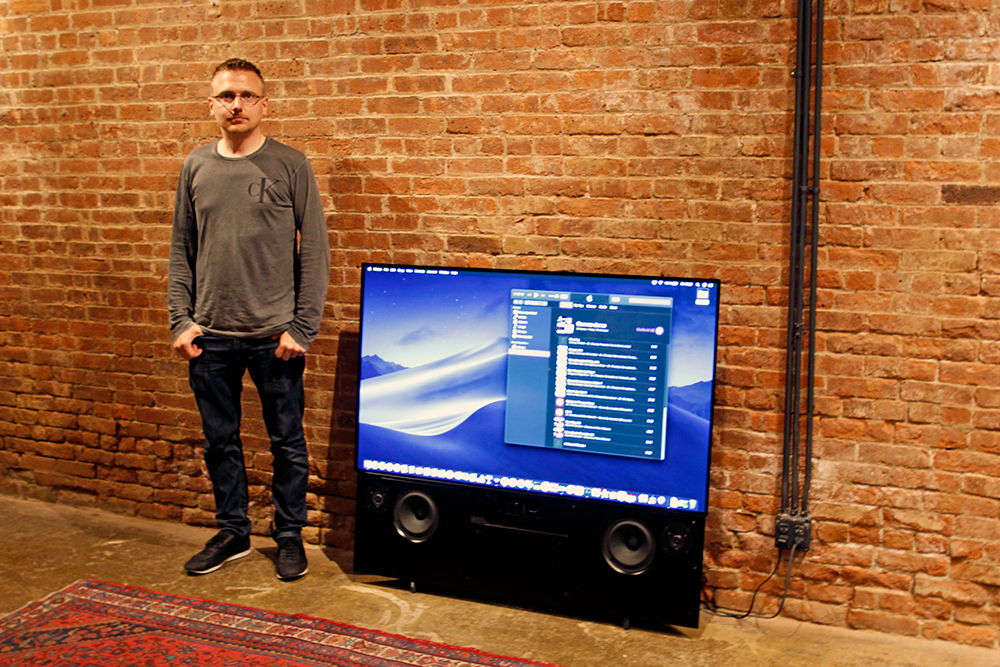 In addition to BACCH-SP processing, Canvas’s stand features a four-channel 200W amplifier, two 6" dynamic drivers with diecast-aluminum chassis for the bass and midrange, and two high-frequency radiators, all manufactured by SB Acoustics, a company started by former Scan-Speak engineers. The stand also features digital room correction, a proprietary chassis-bracing system that is said to reduce standing waves, a video streamer storage slot, interchangeable cover panels that are available in five colors, and a large variety of wired and wireless connectivity options.

The Canvas stand is compatible with LG-branded OLED 55" and 65" B Series (2016 through 2019) and C Series (2017 through 2019) TVs. The stand can be ordered now as part of the company’s pre-crowdfunding campaign at early bird prices of $999 and $1099 for the 55" and 65" TVs, respectively, with a $100 refundable deposit made through Canvas Audio’s website. Both prices will increase by $100 at the start of the official crowdfunding campaign, scheduled for September of this year, and will further increase when the campaign concludes. 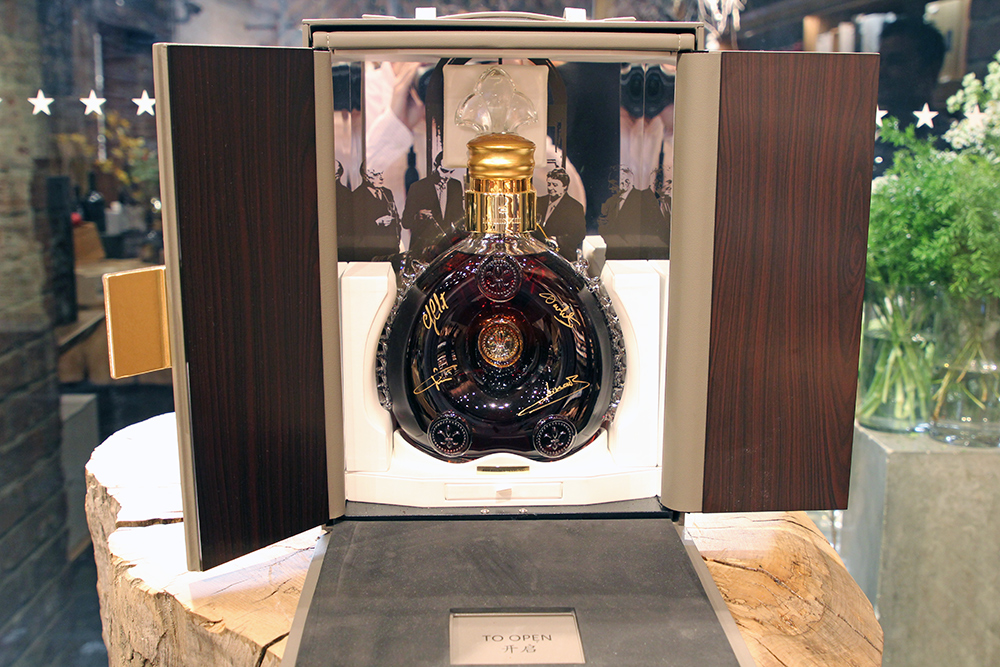 Now for the venue. New York City’s Chelsea Wine Market consists of one square block filled with all types of vendors, many food oriented. The Wine Vault, located in that market, is, to my knowledge, unique in that it mixes fine wine and high-end audio. Upstairs is a gorgeous retail wine store that sells wines of all prices. Whether you need a $3 bottle of Dulce Vida tequila or a $19,999 bottle of Remy Martin Louis XIII cognac, the Wine Vault has them both.

The Wine Vault’s lower level is a cavernous, turn-of-the-century bomb shelter that has been converted into a commercial wine-storage facility. It is in that 80% to 90% humid, 55°F area, with its 66"-thick brick and steel walls, that some of the world’s most serious wine connoisseurs store their most cherished and expensive wine collections -- 30,000 cases in all. Also downstairs is a space that is used for weddings, parties, and, yes, product launch events. 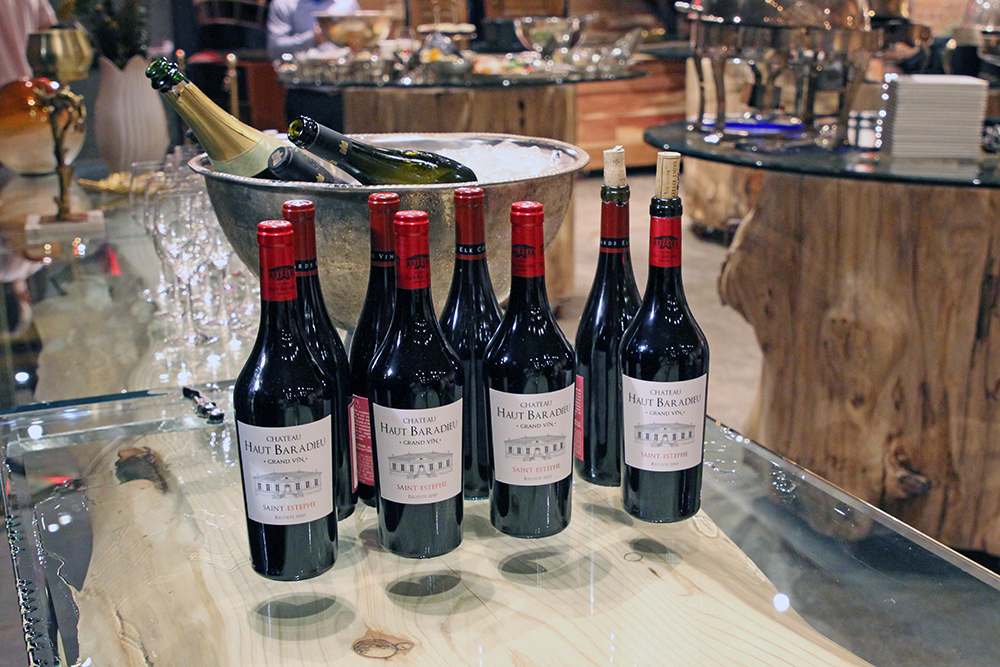 Here is where the audio comes in. Now-retired Wall Street tycoon Andrew Hoover III, who stores his wine collection at the Wine Vault, is an avid audiophile and a friend of Professor Choueiri. In fact, Andrew has so many high-end systems that they cannot fit in his home, and he uses the Wine Vault as an audio system overflow space. There are high-end speakers and components everywhere. For example, the upstairs retail area contains speakers from MartinLogan, Avantgarde Acoustic, and Vapor Audio. There are also amps from companies such as Odyssey Audio. In the downstairs event area are YG Acoustics, Klipsch, and DIY line-array speakers, as well as Krell amplifiers. Also downstairs is a Theoretica Grand BACCH-SP 3D audio processor. 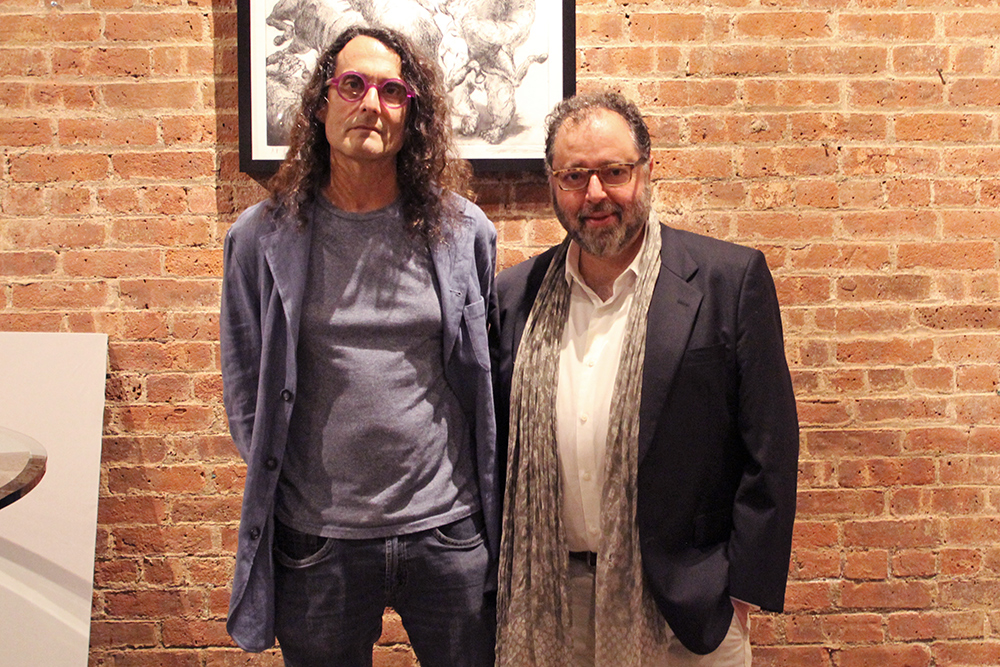 Aside from the press, at the event was Kim Neeper Rasmussen, Canvas’s founder and chief executive officer, and David Chesky, a composer, pianist, and cofounder of Chesky Records and online music store HDtracks. Although Andrew Hoover could not make it, his son, Philip, a promising classical piano student, was there. During the course of the afternoon, Chesky gave Philip a few practice tips on the piano. Also in attendance were several of Professor Choueiri’s friends, including former president of Fox Television Stephen Chao, Prince Wa’el Chehab, and Chinese aerospace businesswoman Sofie Xue. Top-end wines and Italian delicacies abounded. 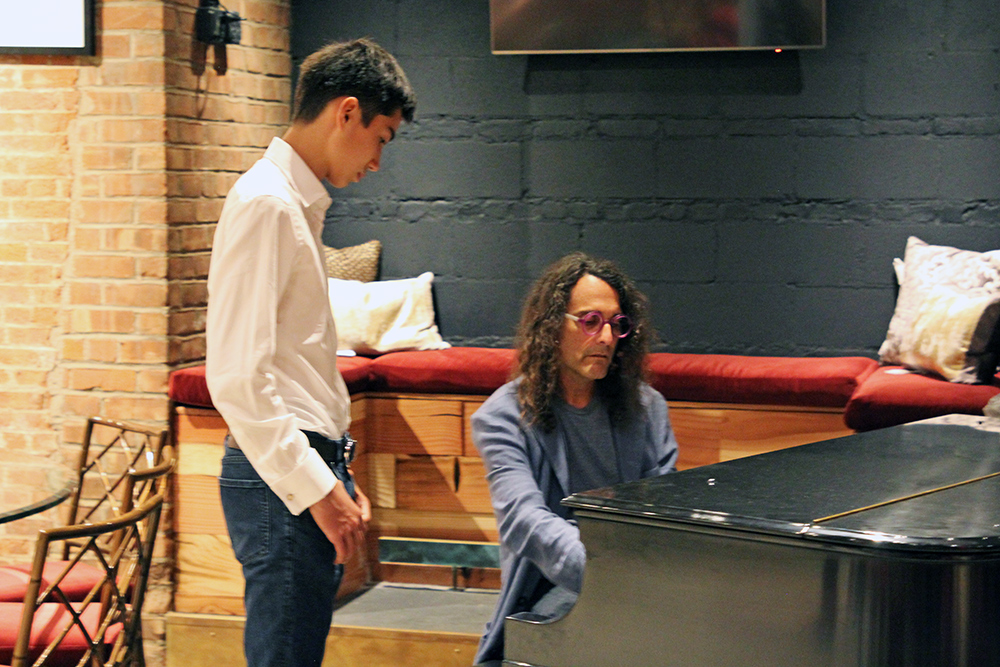 In a very good way, I was a bit taken aback by the demo, which featured movies such as House of Flying Daggers and Blade Runner 2049, and music tracks such as Wycliffe Gordon’s “Down by the Riverside,” from Dreams of New Orleans, released on Chesky Records. The Canvas stand provides a very nice slice of the 3D technology that is offered by Theoretica’s high-end components. 3D sonic images were surprisingly well-formed. While Canvas’s marketing literature suggests the production of stereo imaging that’s 10' to 20' wide, I found soundstage width to be even greater as movie special effects cut a wide swath through the large room. Also, astonished by the deep and controlled bass output, I scanned the room for one or more hidden subwoofers, but none were to be found.

I am unsure of what plans that Canvas or Theoretica may have for the high-end home-theater market. Should they decide to pursue that market and work out all of the technical details, some very established market players could be in for a world of hurt. 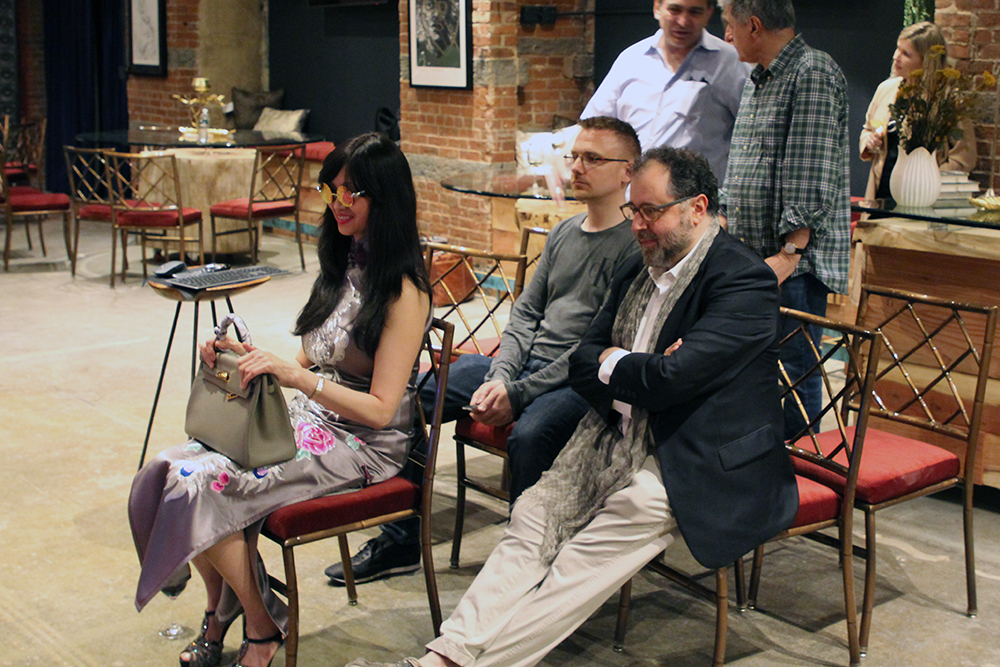 After the demo concluded, Philip gave a riveting solo piano performance. The kid can play! Finally, I was given a private tour of the wine storage area, where the most expensive bottles go for about $200,000. Not wanting to risk ruinous disaster, my guide gave me a bottle to hold valued at a mere $50,000. I was asked not to reveal the names of the company’s mostly wealthy storage clients, whose names were prominently marked on the individual storage lockers.

I left for the day knowing that Canvas Audio is an extremely impressive new company that places cutting-edge audio technology in a sleek all-in-one lifestyle box. It doesn’t take a rocket scientist to figure out that, at about a grand, it’s a stone-cold bargain, even though it did take a rocket scientist to make the company’s new stand sound so good. I just happen to own an LG OLED TV -- don’t think that I haven’t considered getting one.