CanJam encompasses a series of headphone shows that take place at various locations around the world. Arguably, the most important one in North America is CanJam SoCal, the show that takes place in the Los Angeles area -- specifically at the Westin South Coast Plaza hotel in Costa Mesa, California. The 2016 SoCal show, held March 19 to 20, hosted about 60 exhibitors, plus a surprising number of new products.

The show covered ten meeting rooms plus a large tented pavilion, in which headphone, earphone, and headphone-amp manufacturers sat side-by-side at tables showing off their latest wares. If there was a significant high-end headphone or amp that wasn’t available for demo at CanJam SoCal, I sure can’t think of it.

Here are the new and recently introduced products from CanJam SoCal that I thought were the most interesting. All prices in USD. 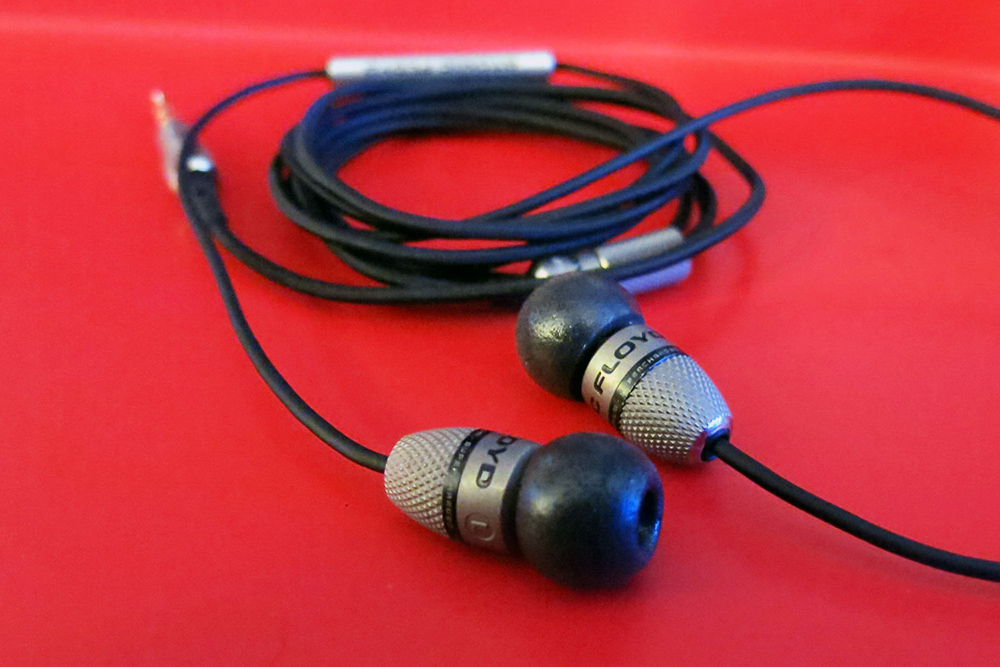 Atomic Floyd is a small British company specializing (or should I say specialising?) in all-metal earphones. The latest model is the $399 SuperDarts Titanium, which packs a single balanced armature and a single dynamic driver into a tiny, almost impossibly light titanium enclosure. While the SuperDarts Titaniums felt no heavier than a cheap set of plastic earphones you’d pick up at 7-Eleven, they sounded like true high-end earphones, with loads of treble detail and solid bass response. 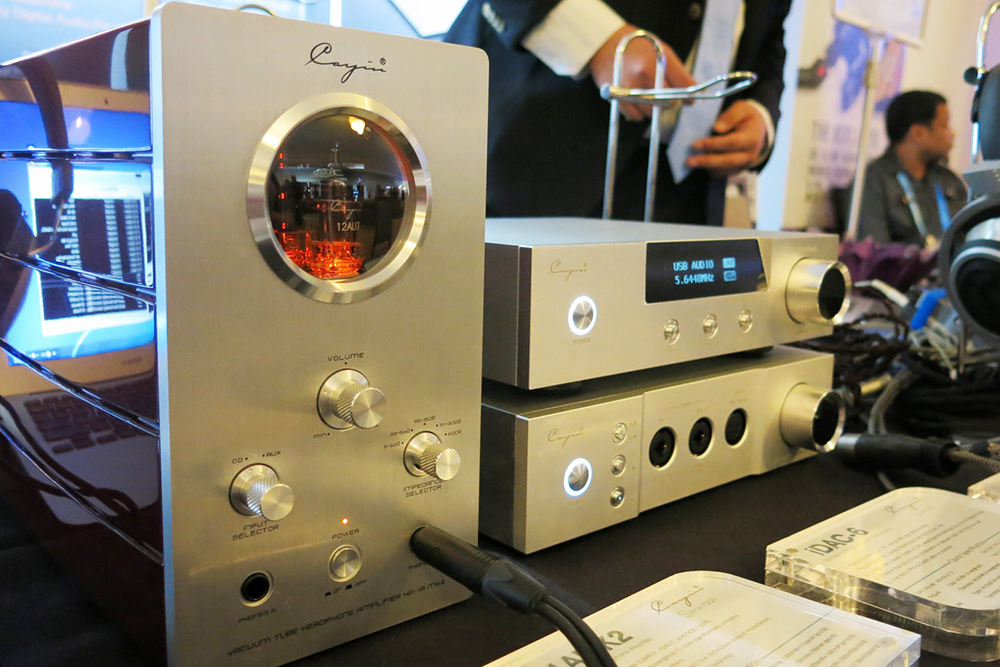 Cayin’s HA-1A Mk.2, shown at left, is a new version of an all-tube headphone amp, the HA-1A Mk.1, introduced in 2005. While the original was designed to drive speakers as well as headphones, the new model is dedicated entirely to headphones. The amp’s EL84 output tubes are said to deliver a whopping 2.1Wpc into 600-ohm headphones; most of the amps I’ve measured can barely manage one tenth of that. Expect a price around $1000. To the right are the new iDAC-6 DAC and the iHA-6 headphone amp, both priced at $999. The amp is solid-state and includes a high-current mode designed for driving planar-magnetic headphones, while the DAC can be switched between tube and solid-state output stages. 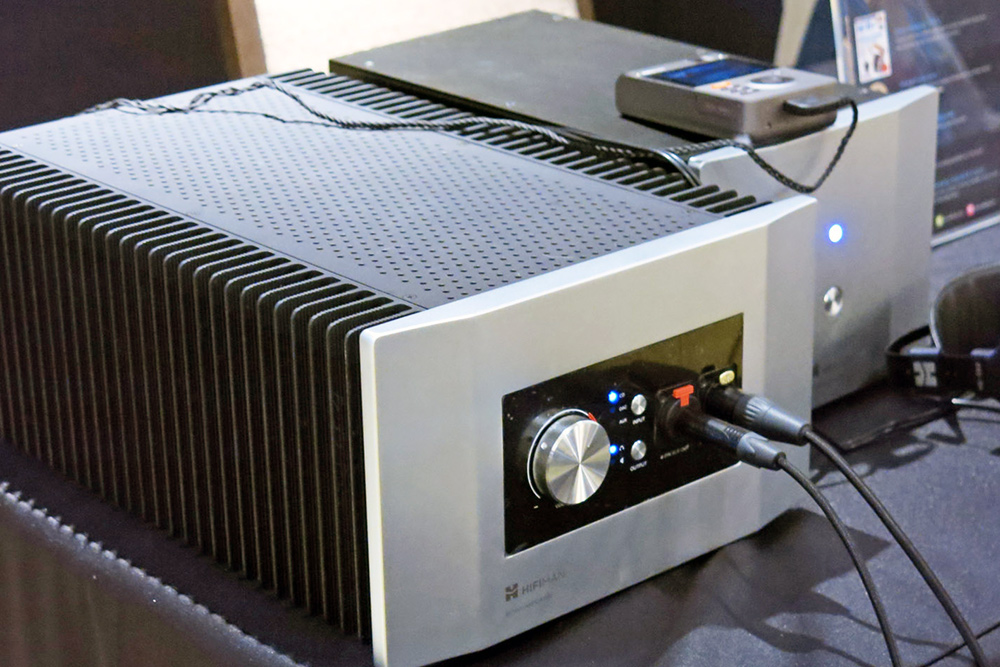 HiFiMan’s EF1000 is surely one of the most over-the-top headphone amps ever built. It’s a hybrid design with 6922-type tubes in the input stage and eight output transistors per channel. According to HiFiMan founder Fang Bian, the EF1000 delivers 70Wpc into a 35-ohm load in class-A mode, and more than 100Wpc in class-AB mode (about 100,000 times more power than most headphones need for average listening). It uses relay-switched resistors for volume control, and uses a separate power supply, which can be seen at right. 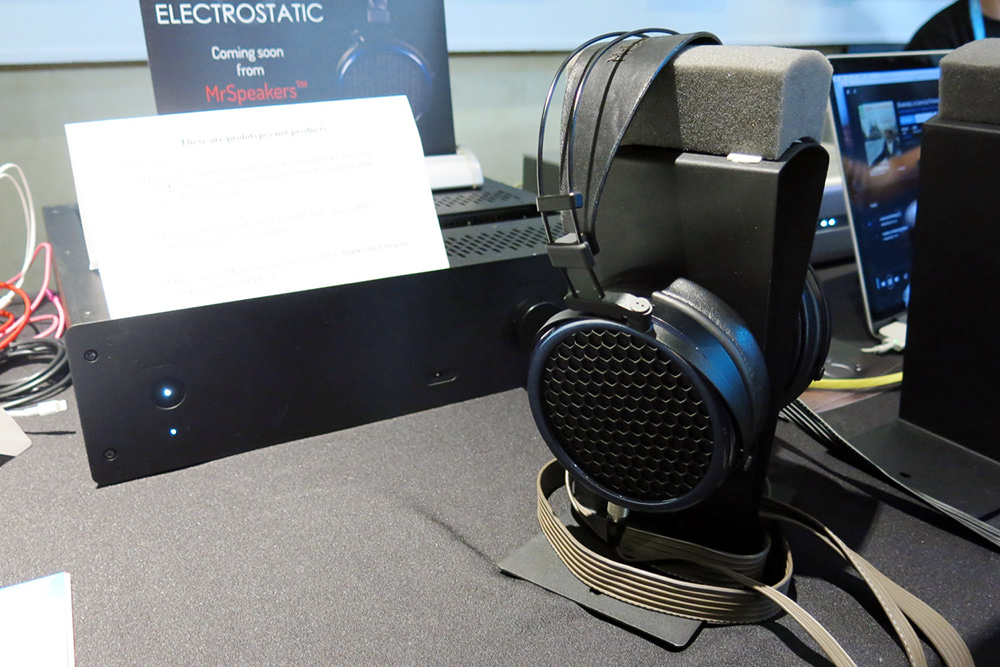 MrSpeakers, a company known for planar-magnetic headphones, showed its first electrostatic model, the Ether Electrostatic. Company head Dan Clark stressed that the exhibit was a “technology demo,” not a showing of a finished product, so no pricing or details were available except that the Ether Electrostatic headphones will be compatible with any amp that works with Stax headphones. In my brief listen, I heard some of the most insanely detailed and delicate treble response I’ve ever heard from headphones, so I’m looking forward to sampling the finished product, which Clark says he hopes to complete this year. 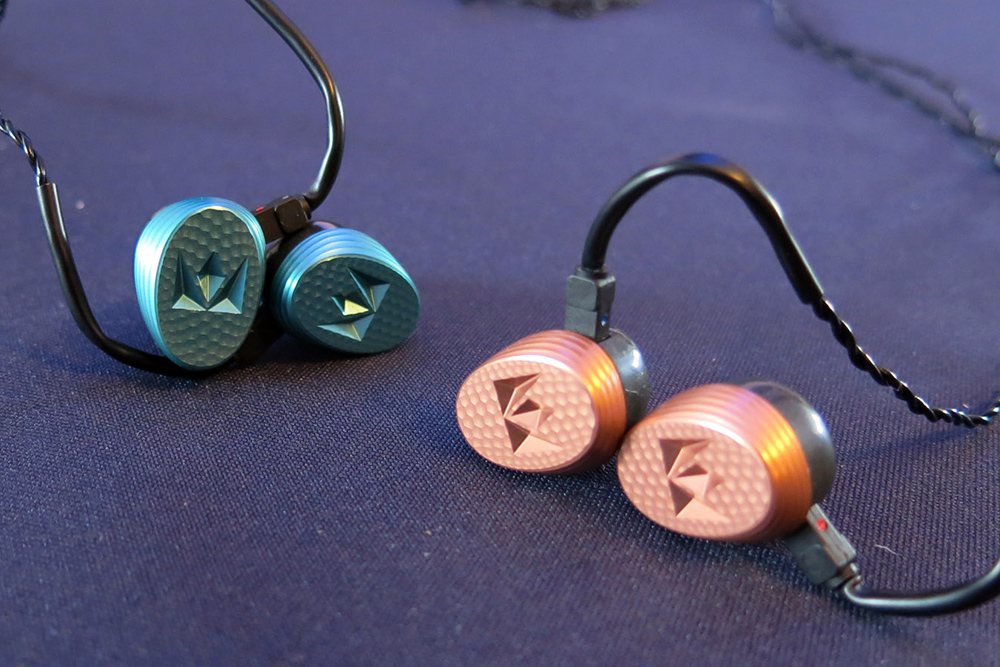 After the successful retooling of its Kaiser 10 earphones, Noble has reworked its Classic line in similar fashion, using aluminum endcaps and internal geometry based on the Kaiser 10s’ design. Prices for universal-fit models range from $399 for the Tridents to $999 for the Djangos. Shown are the $499 Savanna earphones at right and the $699 Dulce Bass earphones at left. Add $100 to $300 for custom-molded versions. 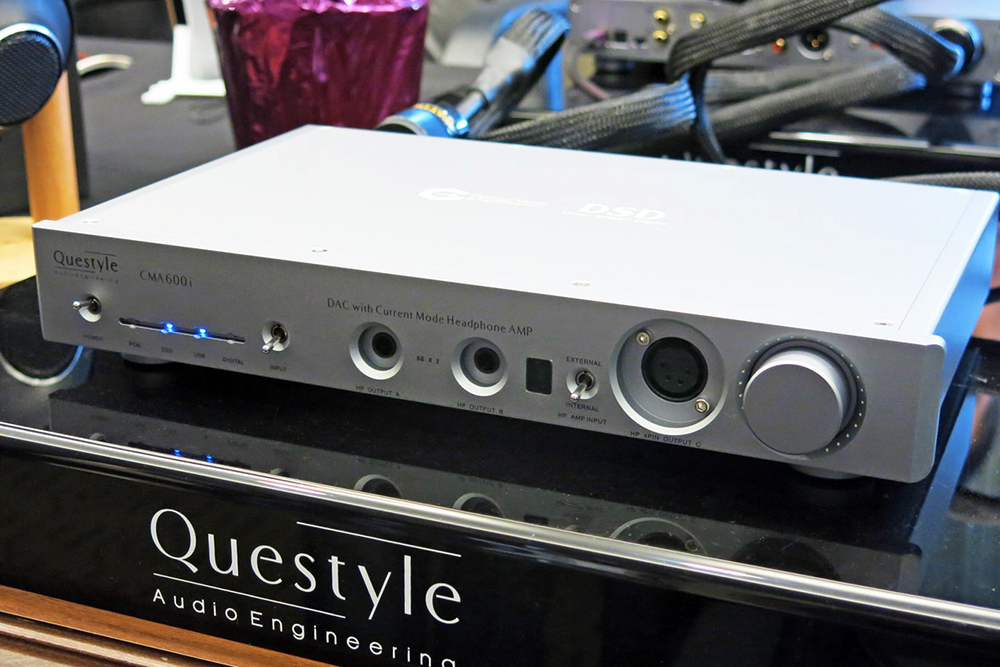 Questyle Audio has built a rep for pricey component-based headphone-amp systems, so I was happy to see the company showing a pleasantly affordable new all-in-one model, the $1299 CMA600i DAC-amplifier. The CMA600i takes USB, TosLink, and coax digital input as well as analog input. The DAC handles DSD signals up to 5.6MHz and PCM up to 24-bit/192kHz. Balanced and single-ended outputs are included. That’s not to say Questyle is neglecting the high end of its business, because the company also showed the Reference Gold components, a $12,500 stack of four units including monoblock-style headphone amps, a DAC, and a preamp. 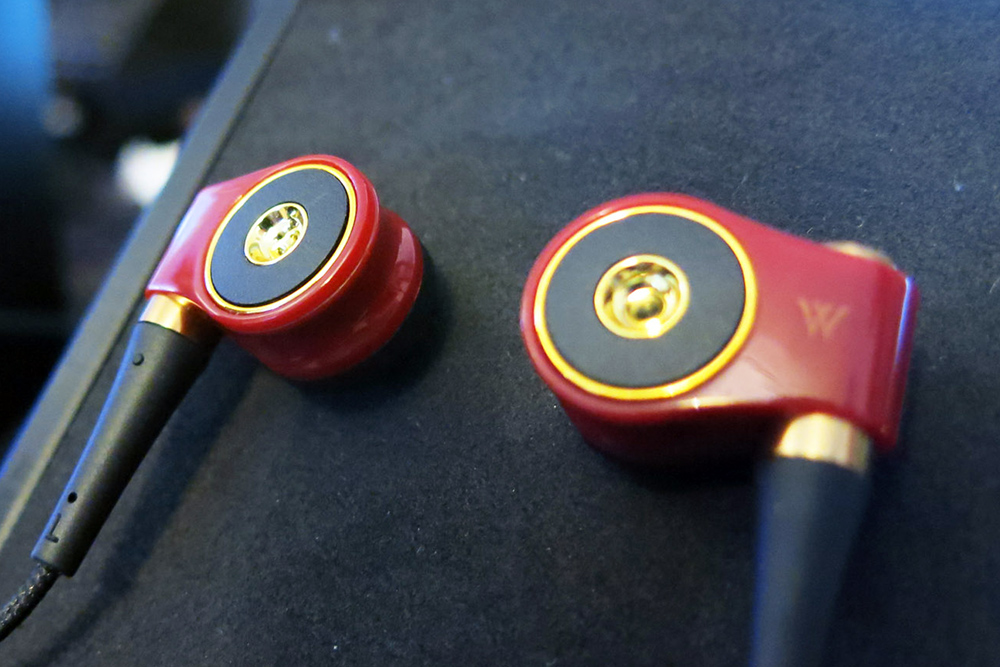 The $420 Radius HP-TWF41 earphones are definitely the most exotic I saw at CanJam SoCal. Each earpiece incorporates a beryllium-diaphragm dynamic driver as the woofer and a ceramic piezoelectric tweeter. I couldn’t have been more skeptical; in my experience, using exotic drivers in headphones usually ends in disaster, especially in hybrid designs. But a “whoa!” involuntarily escaped my lips with the first few notes of Holly Cole’s “Train Song.” I thought the HP-TWF41 earphones combined a nicely neutral tonal balance with exceptionally clear and uncolored vocals and full, yet precise, bass reproduction. 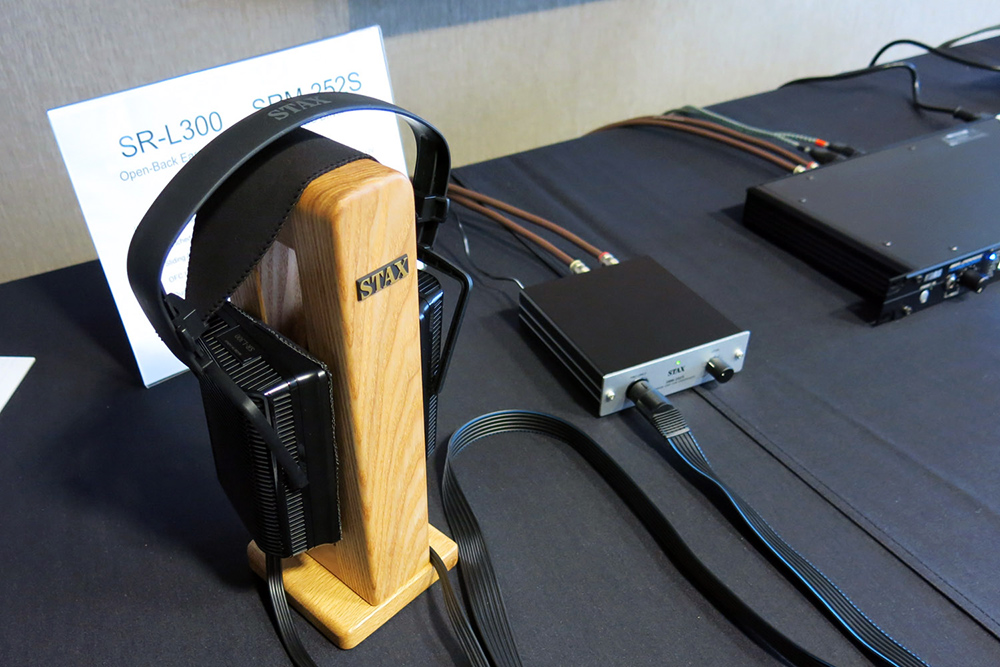 Stax is best known for ultra-expensive electrostatic headphones priced up to about $5000, so it came as a shock to hear that the new SR-L300s will cost about $800 to $900, including a dedicated amplifier. The new headphones felt almost impossibly light on my head, yet delivered plenty of the spacious, enveloping sound enthusiasts expect from electrostatics. 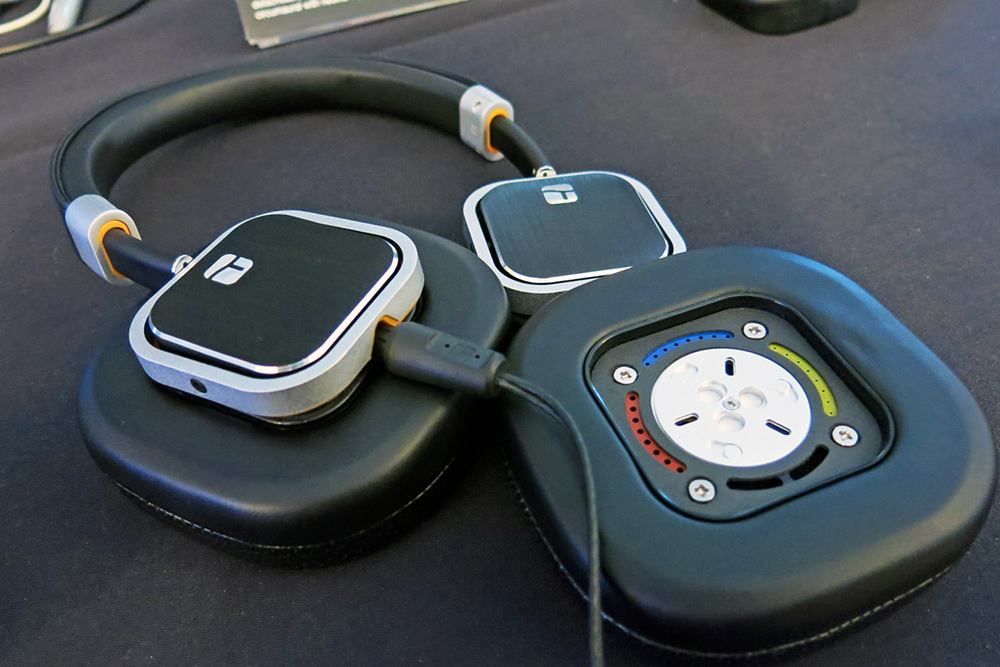 The relatively new brand Torque Audio has already gained a lot of attention for its tunable earphones and headphones, all of which can be set for a variety of different tonal balances. The t401 Pro headphones are basically the same as the t402v headphones I previously reviewed on SoundStage! Xperience; only the earpads are different. But what a difference! The new earpads are porous, so sound can get in and out and the headphones function more like audiophile-style open-back models. As with the t402v ’phones, the t401 Pros’ earpads deliver a different tuning depending on which of the four sides is on top -- but the new pads also add an interior, two-position aluminum vent, which means you have eight tuning options in total. The best of the eight positions gave me the kind of exceptionally flat, natural-sounding response I crave. No price has been set yet, but the t401 Pros should be less expensive than the t402vs because they include only one set of earpads. 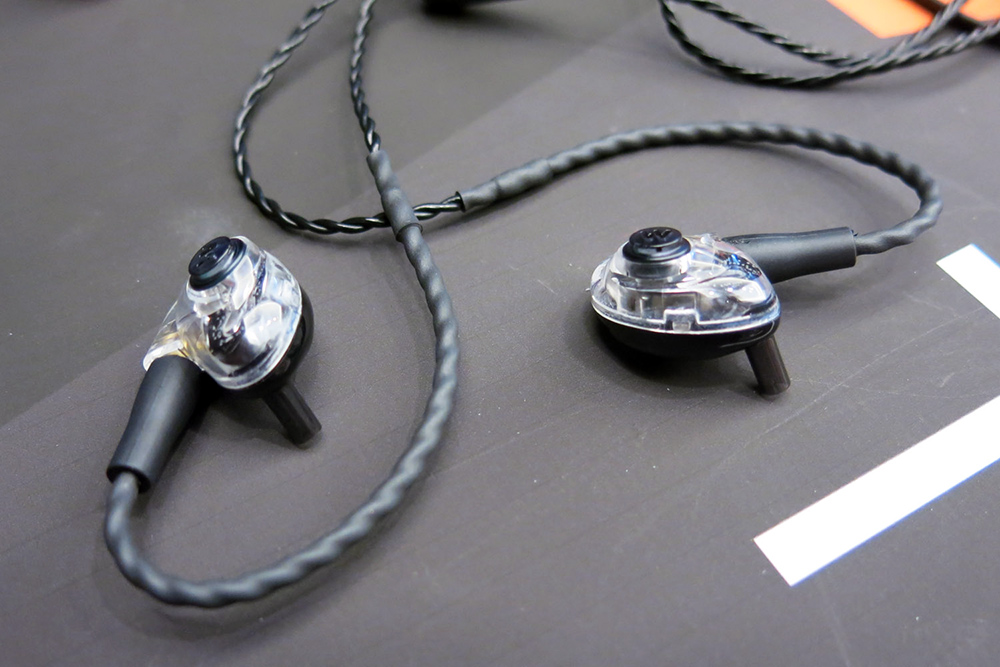 Many earphone users would like to be able to hear ambient sounds, either for safety or just so they can carry on a chat while listening. However, most of the earphones that admit ambient sounds rely on rear ports that allow all the bass to leak out. Westone’s Ambient Pro line incorporates a cavity in each earpiece to trap the bass while still letting in ambient sounds. It’s available in one-, two-, and three-driver models priced from $189 to $439. 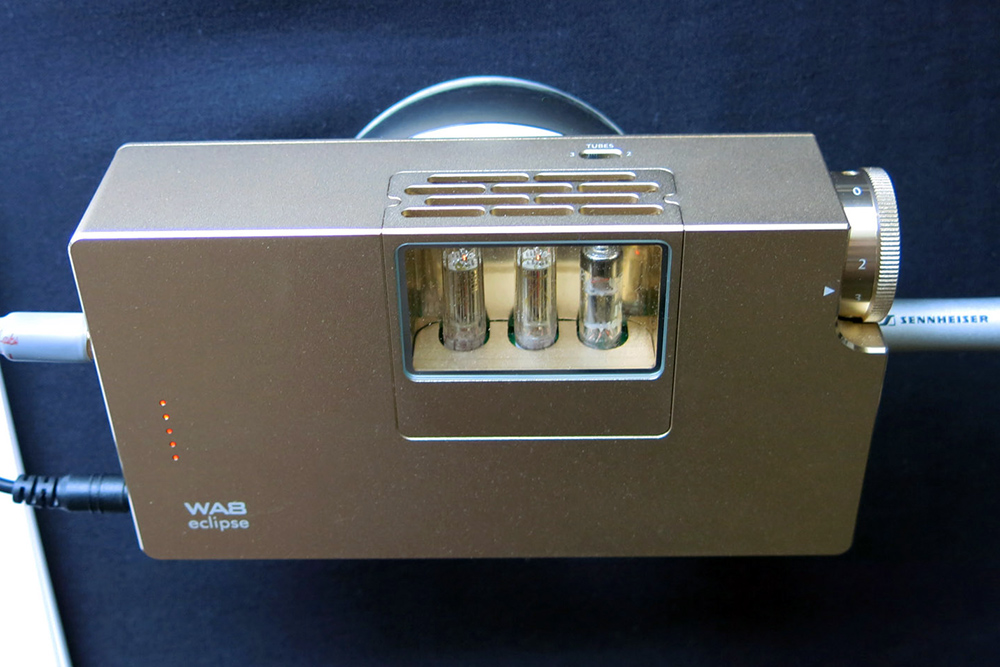 My slavish adherence to alphabetical order pushed the coolest new product from CanJam SoCal to the end. The Woo Audio WA8 Eclipse is a semi-portable DAC-headphone amp that relies entirely on tube amplification. According to company-head Jack Woo, there are no solid-state components in the amplification chain, only in the DAC. The single-ended amp relies on tiny 6S31B power tubes, and a switch lets you use either one or two, depending on how much power you need. A single, even tinier 6021 tube functions as the driver stage. The WA8 Eclipse weighs 2.4 pounds and costs $1799 in black or gray, and $1899 in gold finish.