Thirty-five years. That’s a generation. A long time to be alive. It’s halfway through the biblical three-score and ten that us humans are supposedly allotted -- the best half of a life, some might say.

Thirty-five years. It’s an eternity for an audio company, especially a company such as Italy’s Sonus Faber, which has spent its lifetime building rarefied no-compromise products that are built from the ground up with visual and tactile elegance as their leading-edge hallmarks. The Sonus Faber designers don’t just knock out boxes stuffed with drivers -- they create works of art that also happen to function as speakers. Right from the start, Sonus Faber’s speakers radiated elegance, and through the years I’ve always found myself appreciating its products as sculpture first and as musical transducers second.

From a small, bespoke artisanal producer of handmade speakers, Sonus Faber has expanded and found itself folded into the McIntosh Group, an American company that encapsulates -- amongst others -- McIntosh Laboratory, Audio Research, and Sumiko. It seemed inevitable that along with this expansion some of its products would emigrate from the leather-aproned artisans in Italy to mass production in China. Sure enough, over the past few years, some of SF’s lower-end products have been manufactured in China, but the company’s 35th anniversary sees its new lineup -- the Sonetto -- proudly designed and manufactured in Italy.

In order to give the audio press a chance at a look and a listen to the new Sonettos, Sonus Faber flew a bunch of us down to Kansas City, Missouri, for a first listen to this new speaker line.

Kansas City crept up on me, shedding layers like an onion. As we traversed the city, I noted the beautiful and contradictory architecture -- British cottage-like limestone homes arguing with southern terracotta-tinged art-deco buildings.

The venue for this launch, the 1900 Building, was built in 1966, so it’s had just over 50 years to mature into period architecture. Cast concrete walls and ceilings are mixed with marble slab and modernist flourishes. A wide, flowing spiral staircase leads down to three beautiful light-filled venues that have been carefully designed to project visual elegance and provide superior acoustics. 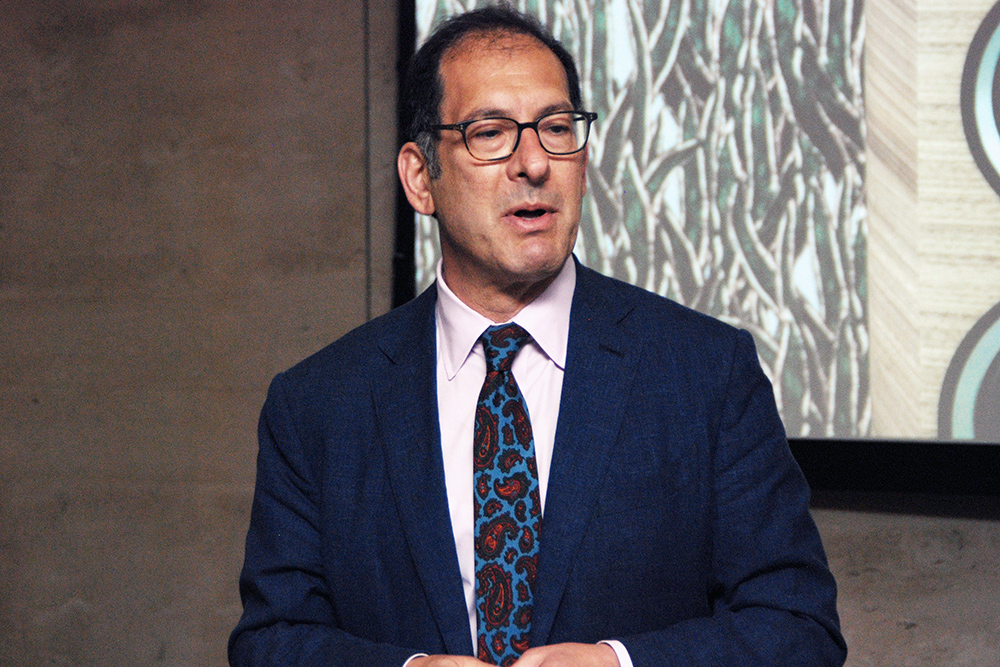 Here’s where this story gets interesting. Steven Karbank, the chairman of Karbank Real Estate Company, which owns the 1900 Building, explained that he’s an audiophile of long standing. If anyone present doubted it, they needed only to look up at the public-address speakers in either of the facility’s beautiful, minimalist performance spaces. 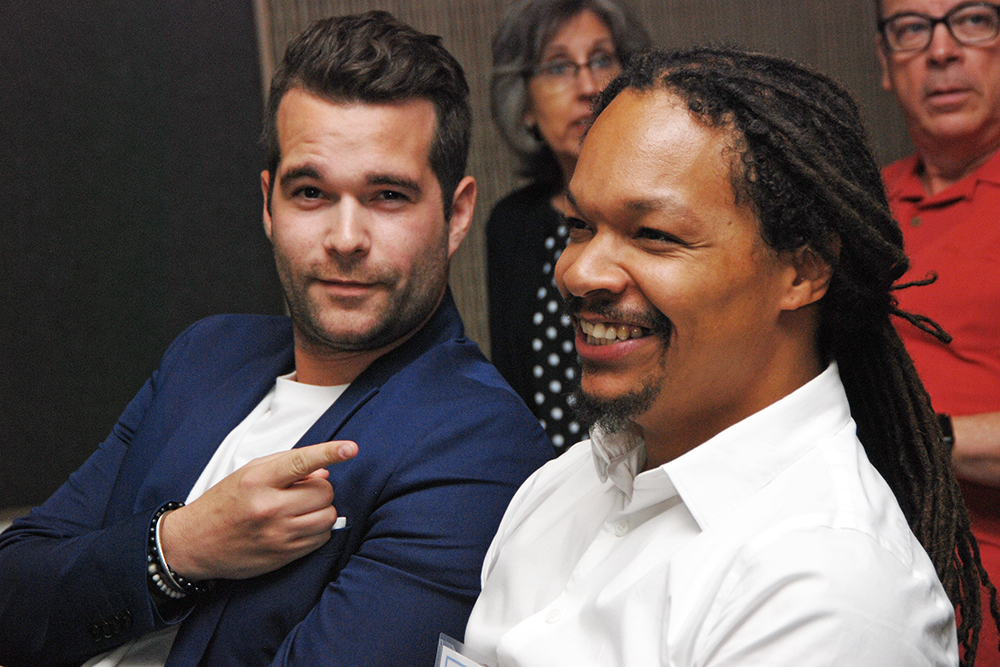 Right up there on the ceiling and unceremoniously bolted to the walls were a significant number of Sonus Faber Vox center-channel speakers. According to Will Kline, Sonus Faber’s North American brand manager, Karbank’s goal for these performance spaces was for the audience to experience a seamless listening experience, regardless of seating position, with no sense of transition from the first row through to the very back. No idle boast, this, as Sonus Faber had arranged for three performers to provide a demo for our benefit. 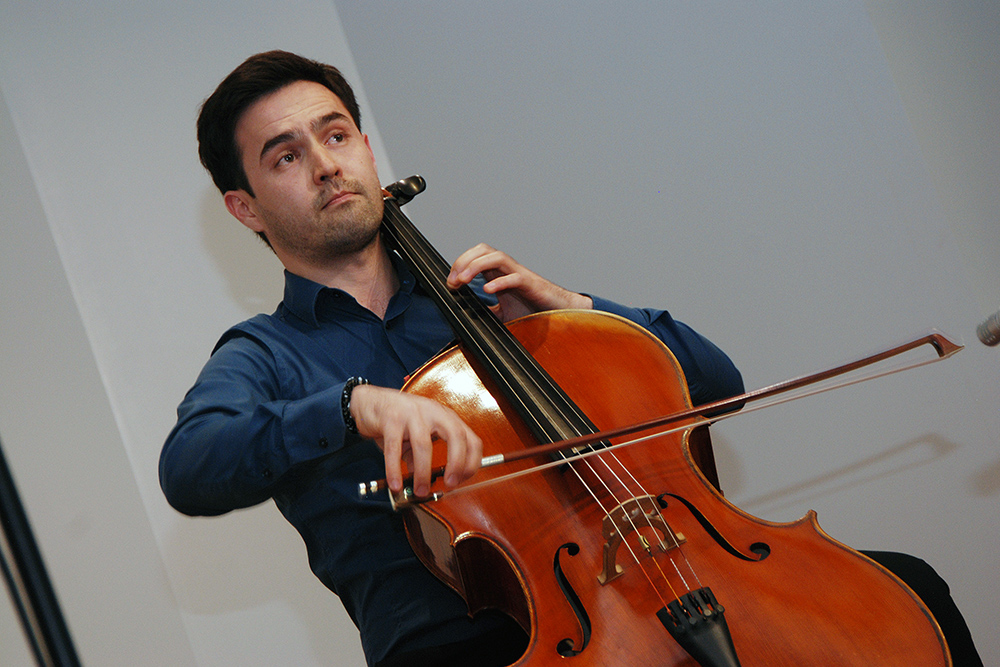 Solo violin and cello leave no room for a PA system to hide, and I spent much of the performances walking around the room, listening for what the speakers were contributing. True enough, there was a coherence to the sound that followed me around the room. Right at the front, I could hear a combination of both the reinforced PA sound and the direct sound emanating from the strings, but it was a complementary combination that I actively had to listen for. As I moved back, the direct sound quickly tailed off, and the contributions of the Sonus Faber speakers took up the slack. I’d say that Karbank achieved his goal with these rooms. 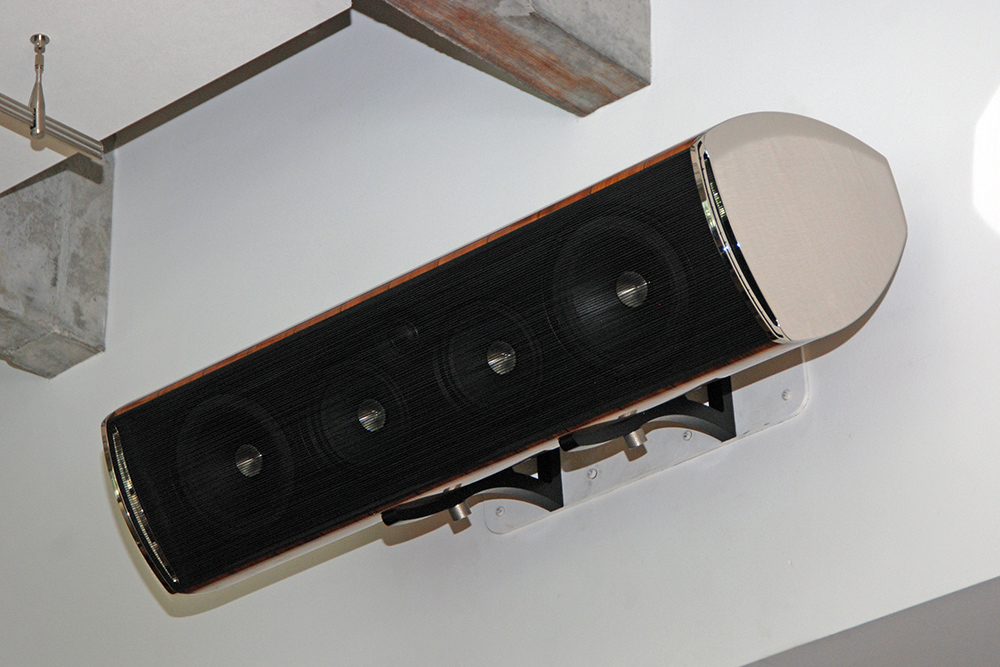 But we were down here to investigate the Sonettos, right? As I stated earlier, the Sonetto line is designed and manufactured in Italy, and from an aesthetic viewpoint, it encapsulates the elegance that all SF speakers radiate. Of the three available finishes, the beautiful edge-grain walnut veneer jumped out at me, pulled me in, and made me want to stroke it. The matte satin-white finish has a stark, architectural severity to it that fit in perfectly with the 1900 Building’s sparseness, while the gloss black finish looked deep and lustrous. The three finishes -- with the inclusion of the white one -- provide ample versatility, but if it were my cash, I’d grab the walnut veneer, no question.

The top of the speaker is inset with a padded slice of hand-sewn leather that is embossed with the Sonus Faber logo. It’s soft, supple, and slightly padded, and it invites a caress. 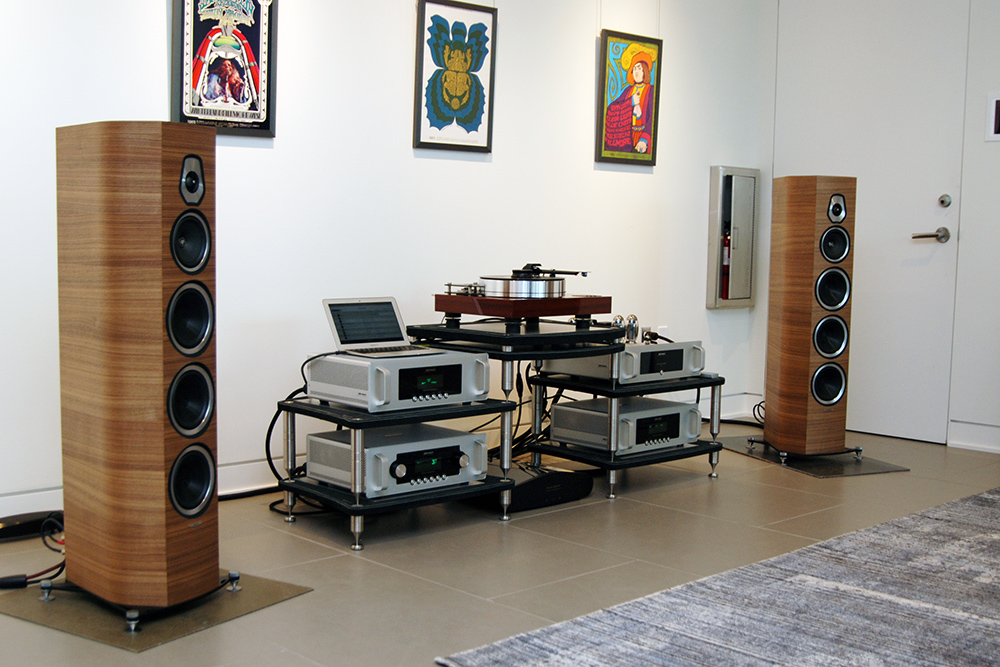 Sonus Faber pulled out all the stops on the multiple systems fronting the Sonettos. Tons of high-rent Audio Research and McIntosh boxes, and a juicy Pro-Ject turntable provided the motivation. We sat down and had a listen to both the VIII and the V floorstanders, which I will describe in more detail below. While the speakers sounded just great -- tight, well-defined bass leading up through to a clean, unfatiguing treble -- it was honestly hard to get the measure of their sound. This room in the 1900 Building was reflective beyond belief, and the speakers were set up asymmetrically in the room, with one side bouncing off a boundary and the other in free space. Hard walls behind the speakers, hardwood floors, and huge glass windows behind the listening position added to the slap echo. 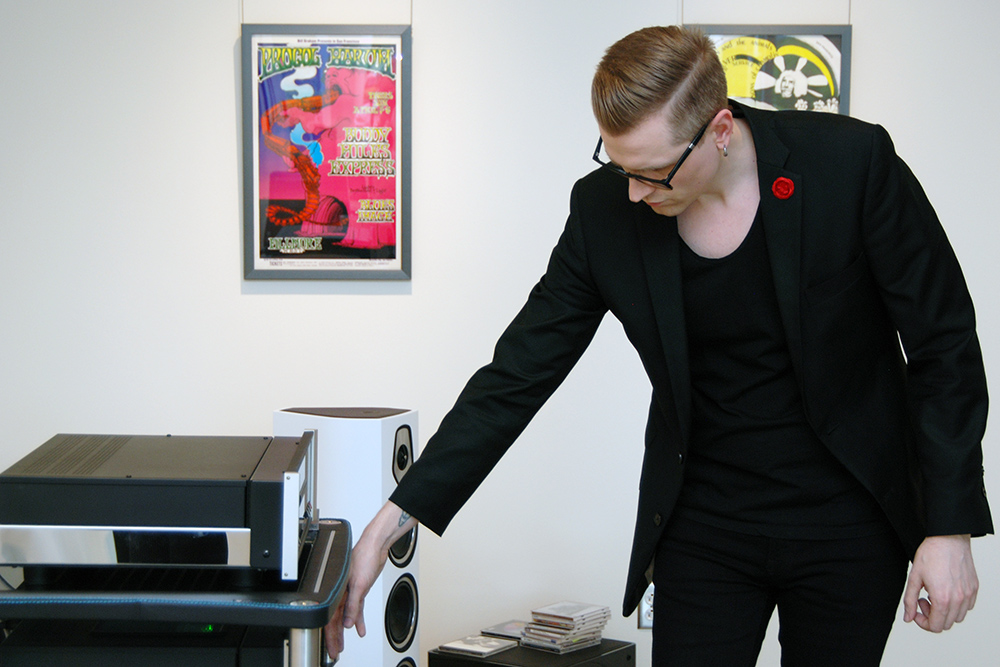 There are seven speakers in the new Sonetto line -- three floorstanders (III, V, and VIII) and two stand-mounted speakers (I and II) form the core. The speakers are bottom-ported in order to ease room placement, and there’s a fair bit of variation, so it shouldn’t be hard to choose an appropriate size. All speakers in the line employ Sonus Faber’s Damped Apex Dome tweeter and a midrange made from a blend of natural fibers. 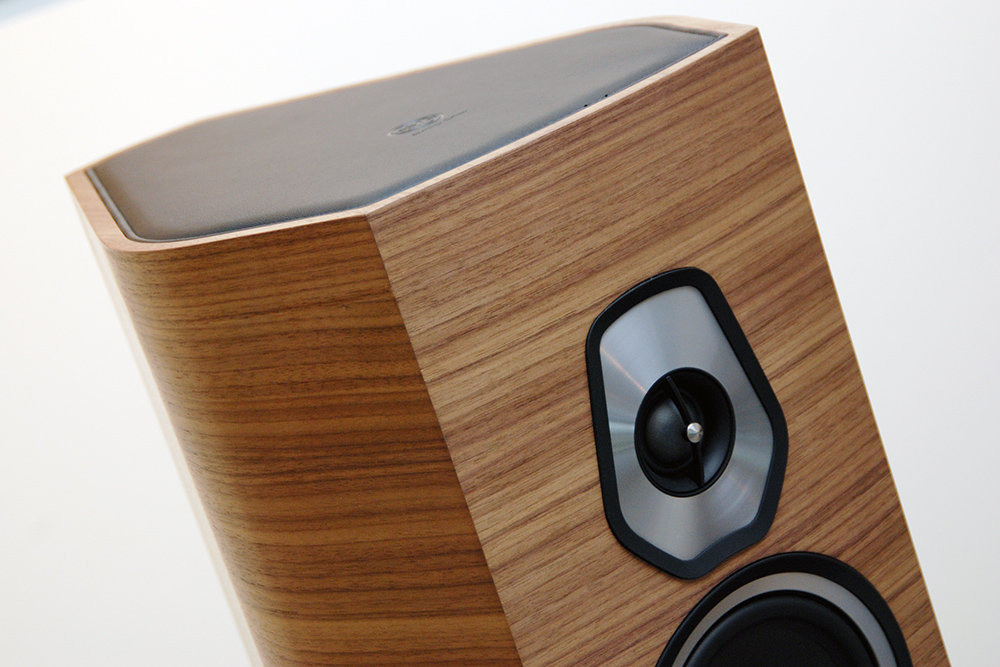 Starting from the top, the VIII ($6499 USD/pair) is a true full-range speaker, with three 7.1" woofers. The VIII is a chunky guy, reaching down to 36Hz and stabilized by aluminum outriggers. Moving down the line is the Sonetto V ($4999/pair), with one less woofer than the VIII and a commensurately smaller cabinet volume. The Sonetto III ($3999/pair) is armed with two slightly smaller 6" woofers.

The two bookshelf speakers, the Sonettos II ($2299/pair) and I ($1699/pair), are also bottom-ported, but the port folds out to the front so they can be placed directly on shelves or stands, although Sonus Faber’s milled-aluminum stands would be my choice, given their rigidity and the commensurately high level of carriage work. The II relies on that natural-fiber midrange to also perform bass duty, and it’ll dig down to a respectable 42Hz. The baby Sonetto I uses a 6" midrange as compared to the 6.5" cone in the II, but that substitution nips off only 3Hz of bass extension compared to its bigger brother. 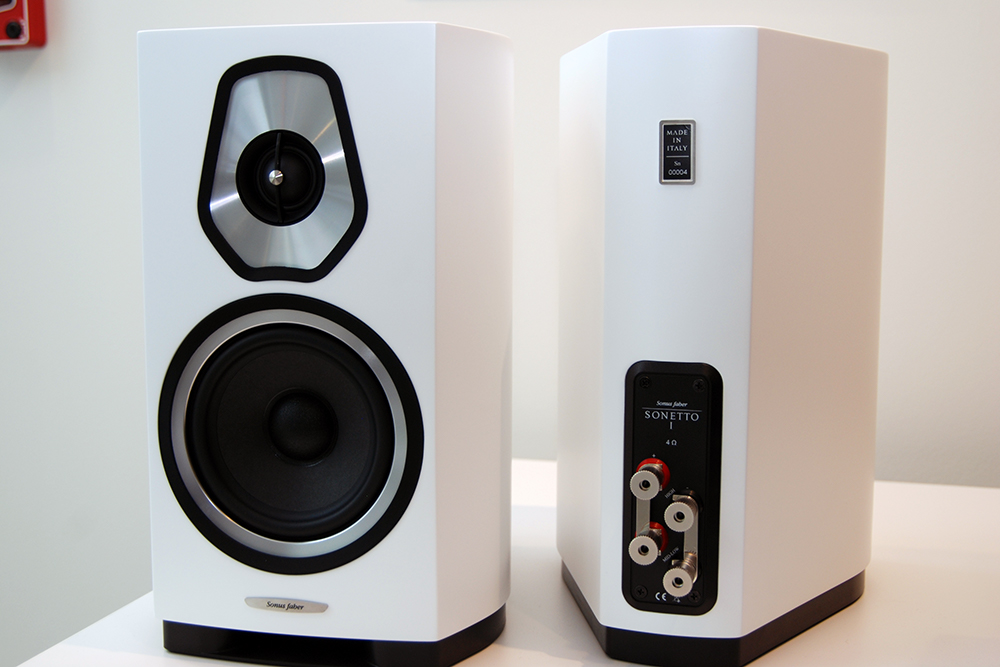 During our time at the 1900 Building, Sonus Faber made it very clear to us that the Sonettos contained much trickle-down tech from the company’s more expensive products, and as such presented a demarcation point between the made-in-China products and the higher-priced Olympica-and-up lines.

And really, when you take a good close look at the build quality of the Sonetto speakers -- the carriage work, the finish quality, the high-rent components -- they leave little doubt in your mind that, yes indeed, they’re made in Italy, by Italian craftsmen and women. 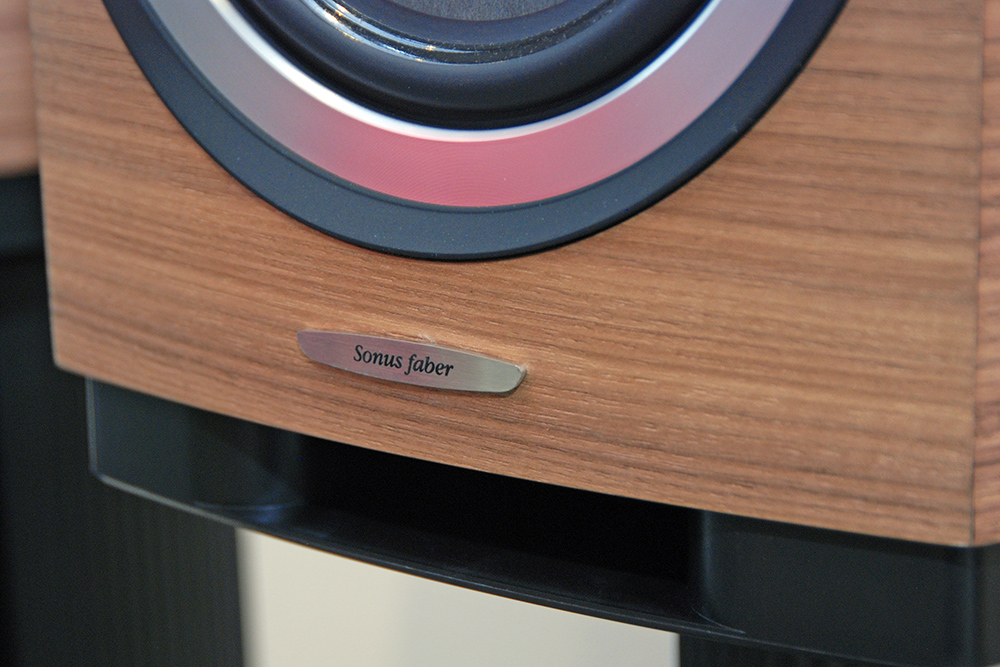 However, the prices of the speakers in the Sonetto line scream Far East, not Vicenza, Italy. Running from the smallest Sonetto I right up to the floorstanding VIII, I was quite taken aback that these were not jobbed out elsewhere, so to speak.

The Sonetto line presents a lot of speaker for the money, and a product that radiates pride of ownership. Ottimo lavoro, Sonus Faber.