Thirty years ago, audio manufacturers often conducted product demonstrations at audio society meetings. At these demos, the manufacturers gained exposure for their products, had the time to discuss the products in some depth, and happily for all, offered the demo samples at a discount at the event’s conclusion. But at some point, it became harder and harder for many of the societies to find manufacturers who were willing to hold demos, and the number of them gradually decreased.

Perhaps most damning for the demos was that the membership of many of the societies came to primarily consist of aging adults who were generally not in the equipment-buying stage of their audiophile lives. There was also the cost of shipping the product samples to (and possibly from) the demo, which over the years has seemingly risen more than inflation.

Fast forward to 2019, and there is now no shortage of these demos. Whether this is due to the demise of many brick-and-mortar audio retailers, the ever-increasing expense of exhibiting at an audio show, or something else entirely, I have no idea. Either way, one audiophile society manufacturer demo that I attended on August 16 involved the Audio Syndrome audio club, which hails from Long Island, New York. At a satellite location of Huntington, New York’s Sound Insight audio store, GT Audio Works, Zanden Audio Systems, and Triode Wire Labs set up shop and took a group of about 30 audiophiles through an evening of analog and digital sources, tubed and solid-state electronics, and open-baffle speakers featuring planar and ribbon drivers. 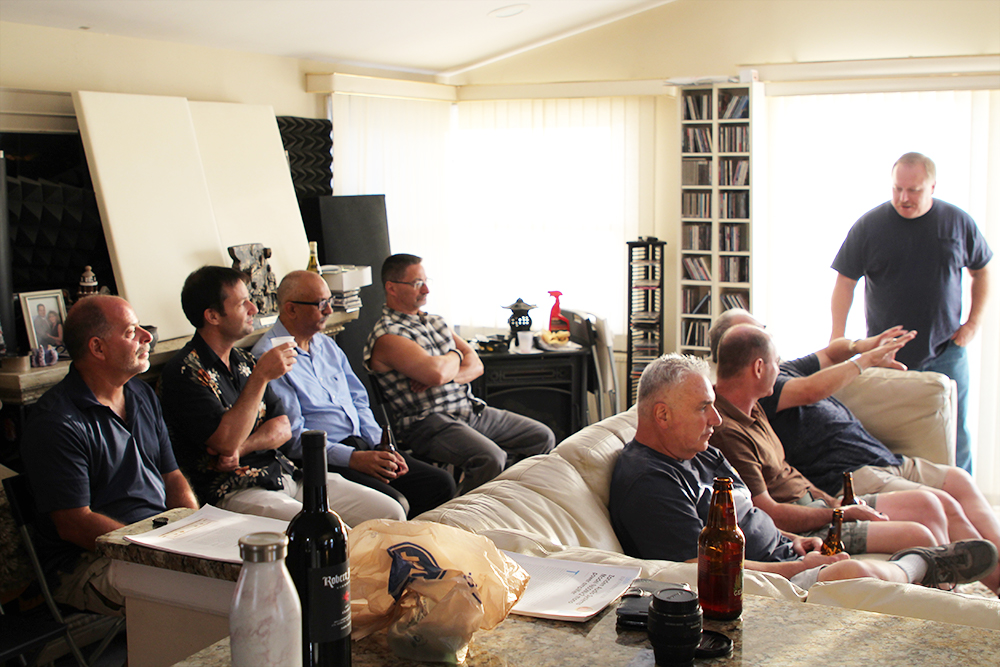 Started in 2012 by speaker builder Greg Takesh, New Jersey’s GT Audio Works is a one-man shop that manufactures open-baffle dipole speakers that use ribbon tweeters and planar-magnetic panels featuring a proprietary membrane. Running full-range, these speakers can be used with or without subwoofers. Takesh states that his lean operation allows him to keep prices below that of his competitors.

Designer Kazutoshi Yamada Osaka started Japan-based Zanden Audio Systems in 1980. The company is known for manufacturing chromed and shiny tube-based electronics that are exemplars of audio jewelry and craftsmanship.

Based in Massapequa Park, New York, Triode Wire Labs was officially started in 2010 by “Triode Pete” Grzybowski, who has worked in the power-generation industry for 30 years. Pete states that he has tirelessly experimented since 1995 to perfect his cables using various connector, conductor, insulation, grounding, and shielding materials and techniques.

I arrived at the demo to find representatives from each of the above companies: GT Audio’s Greg Takesh; Zanden Audio Systems’ US distributor, Eric Pheils; Sound Insight’s Steve Rabitz; and Triode Wire Lab’s “Triode Pete.” I also found a physically substantial playback system. For analog devotees there was a VPI Industries HW-40 Anniversary turntable with a newly designed Fatboy arm (together, $15,000, all prices in USD) and an Ortofon Cadenza Bronze MC cartridge ($2309). For the digital folk, there was an Esoteric K-01Xs SACD/CD player-DAC ($22,000). 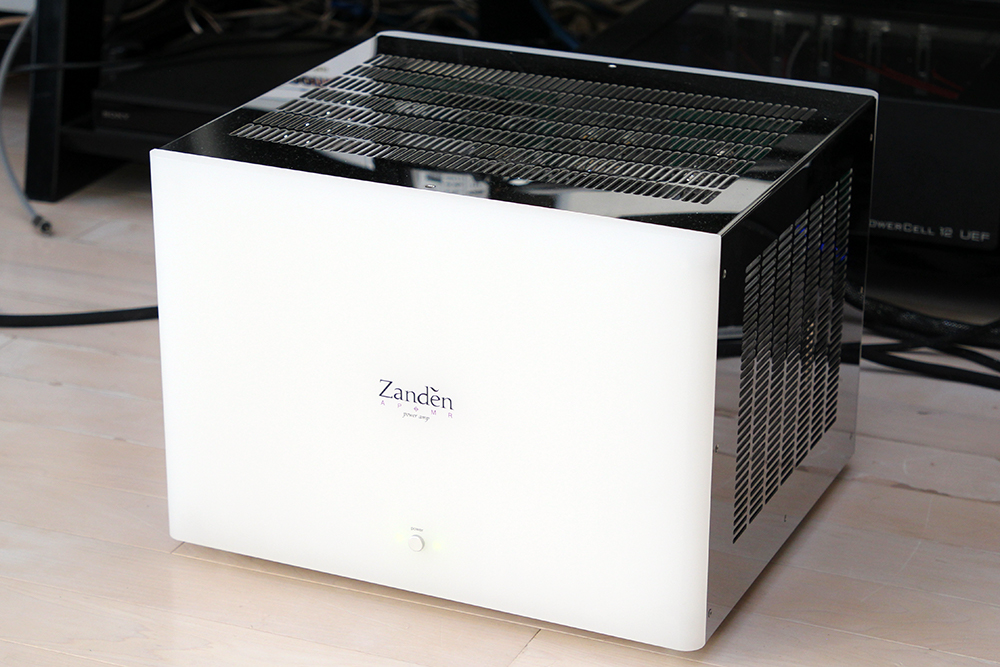 Next were components from Zanden’s Modern line. There was the Model 8120 100Wpc class-A/B stereo tube amplifier ($26,200 with balanced inputs and input transformers), whose tube complement consists of four 12AU7s and four KT120s, the latter on the output stage. There was also the Model 3100 tube line stage ($12,500), whose short-path design features input and output transformers, as well as two Philips JAN 5687WB tubes -- one for its single gain stage (without negative feedback) and the other for rectification. Finally, there was the Model 120 phono stage ($8375), which features a solid-state amplification circuit and five selectable EQ curves (RIAA, Teldec, EMI, Columbia, and Decca). 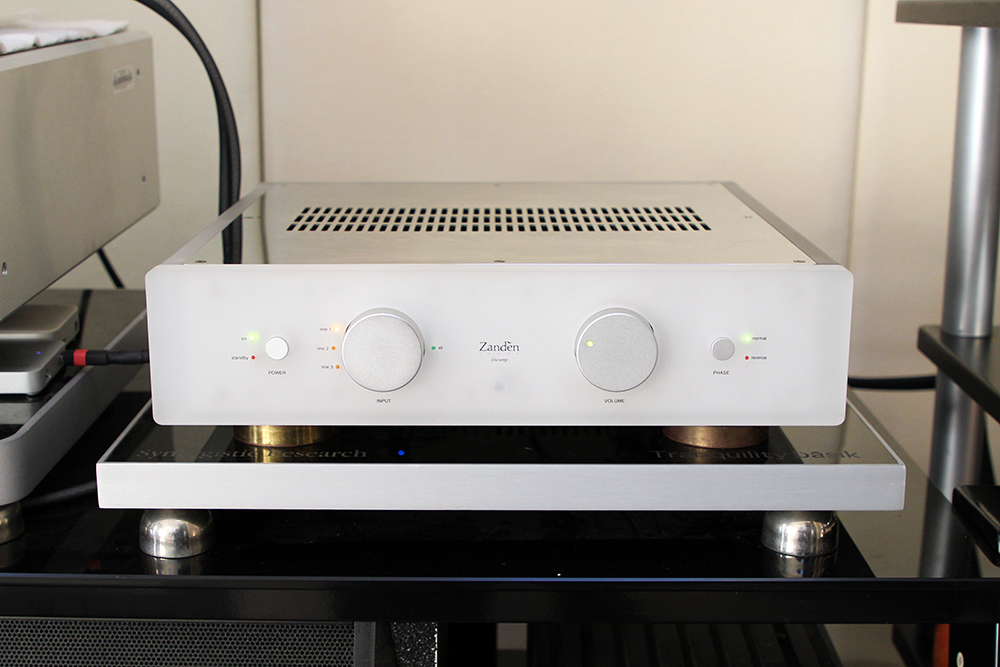 Surprisingly, at least to me, the room treatments were also from Zanden. These were the company’s AP-1 flat panels ($350 each), AT-2 2m-tall tubes with cloth covering ($950 each), and stands for the AT-2 tubes ($160 each). As Pheils explained to me, these treatments came as a result of a collaboration with Naraji Sakamoto, who was formerly the head of Panasonic’s Audio Research Center and is credited with establishing the Technics brand. Sakamoto discovered a low-repulsion polyurethane foam, which, according to his research, exhibits nearly ideal characteristics for a damping material. This material, which became known as Crie-Composite, is at the heart of these Zanden treatments.

Last were the physically imposing transducers -- a pair of GT Audio Works’ planar-ribbon, dipole GTA3.1R speakers ($23,000/pr.) matched with GT’s optional, active SI 600 open-baffle, dipole subwoofer system. Eschewing OEM drivers, the two-way, 78"-tall, 100-pound speaker uses a 0.5" foil ribbon tweeter and a 10"-wide planar driver with an ultra-thin proprietary diaphragm. Together, these drivers are said to operate sans crossover down to 50Hz. The subwoofer system handles anything below that. Takesh uses neodymium magnets on the speaker’s drivers, which, he states, allow it to achieve 92dB/W/m sensitivity. 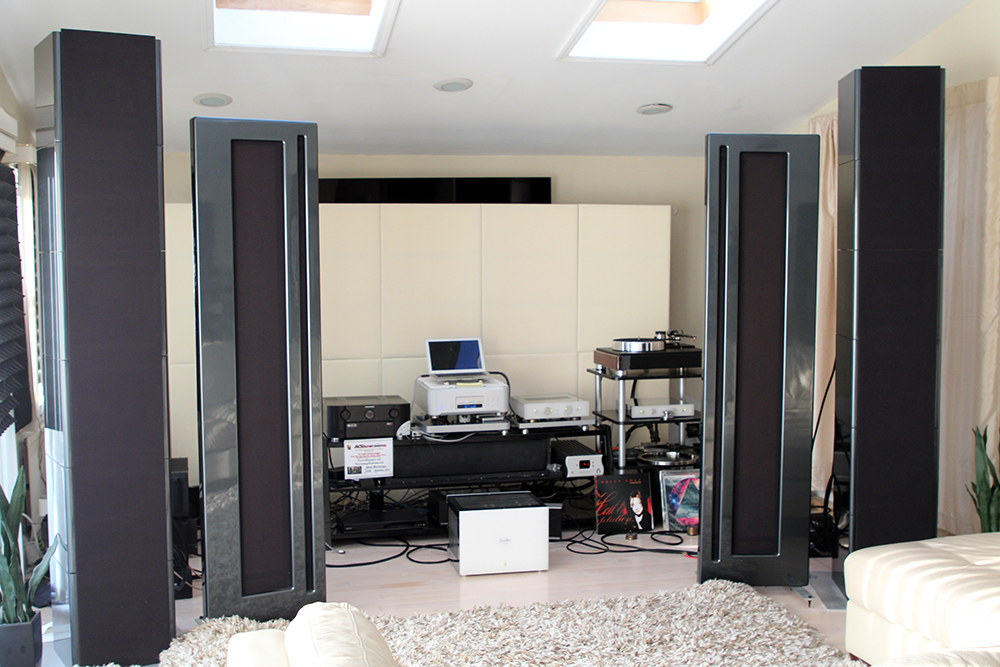 Speaking of the subwoofer system, it is modular and is available in two, three, four, or six modules per stereo pair. The six-module-per-channel version used at the demo retails for $23,500 per stereo pair. Takesh states that this system goes down to a subterranean 16Hz. Although the subwoofer system was previously manufactured by Sound Insights, Takesh now builds it.

Everything was connected with Triode Wire Labs cables and power cords. Although not constituting a full list, these included the brand’s American speaker cables (starting at $699, depending on terminations, per 6' pair), Silver Statement power cords ($1199 per 6' length), Spirit II interconnects ($399 and $499 for a 1m length with RCA and XLR terminations, respectively), and Split Power & Data USB cable ($399 per 1.5m length). 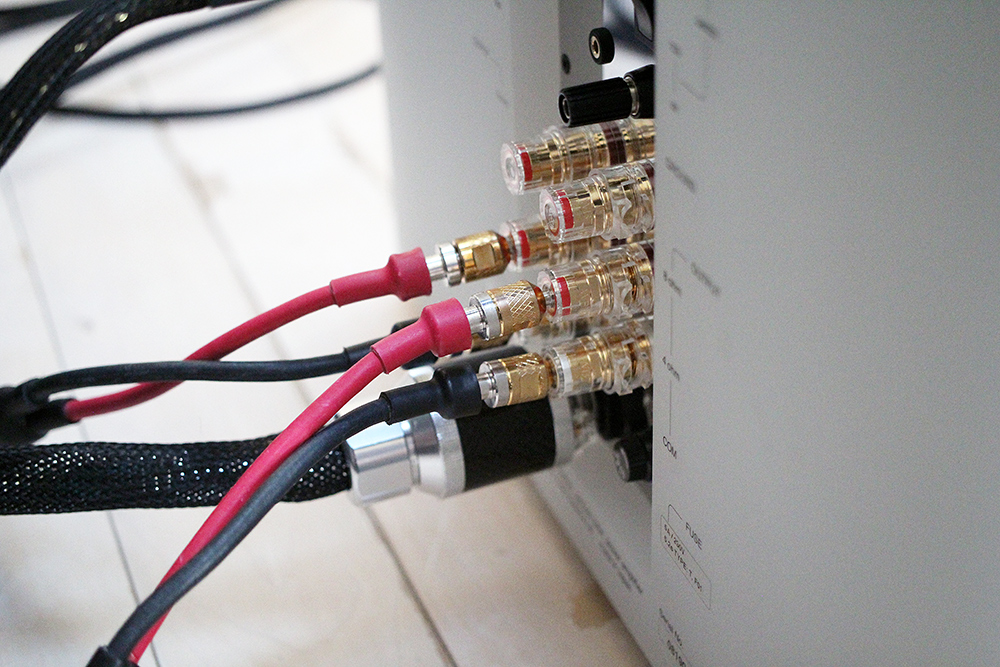 When the demo began, it became apparent that the sound was uncommonly large. I am talking about the type of large that in my experience can only be obtained with really large speakers in a large room (here, 27' x 16'). The sound was also highly transparent, which was not unexpected based on the marriage of planar and ribbon drivers. The result was that I felt as if I could get up and walk around the soundstage. Also, the sound was detailed, yet did not exhibit the type of hyper-detail of some systems. Undoubtedly, it exemplified the Zanden house sound -- dynamic enough to enthrall, but neutral and organic.

By way of one example only, on “That’s All,” from Soular Energy by the Ray Brown Trio featuring Gene Harris (LP, Analogue Productions), the performers were laid out on an uncommonly expansive soundstage. Harris’s piano keys were hard-hit and penetrating. The piece was presented with an elegance that was worthy of this great jazz track. 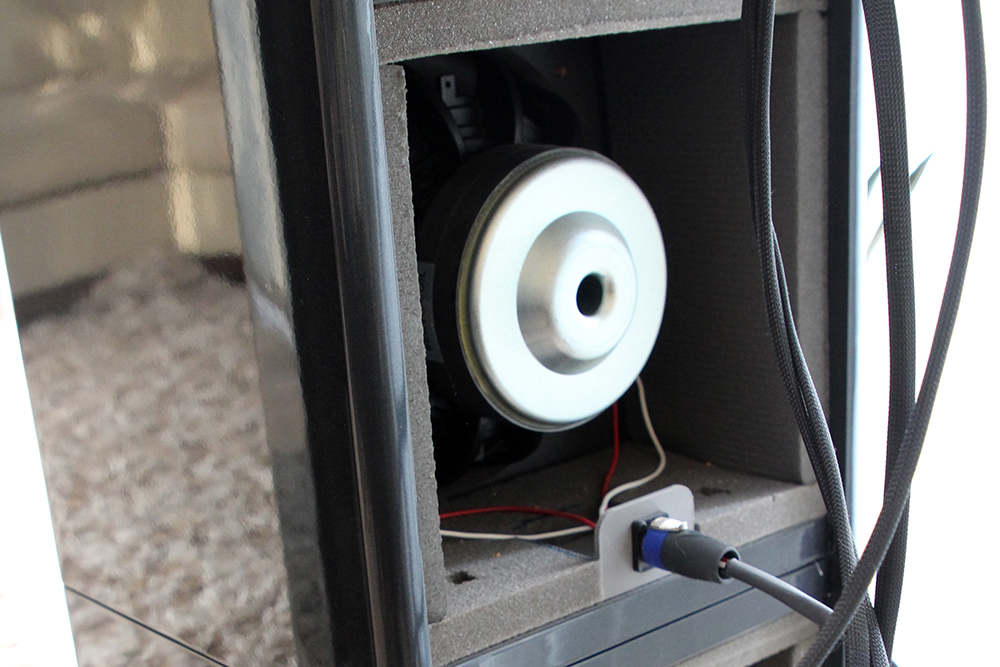 Ray Brown’s bass notes went low, and were generally very well controlled, snappy, and detailed. However, I noticed that on some tracks there was an excess of lower bass energy near the room’s rear wall. At one point, a few small items, CD cases and the like, even fell from a shelf in that area. I mentioned this to Pheils, who agreed with my observation and asserted that the room’s rear would benefit from additional Zanden treatments. Treatments aside, the version of the subwoofer system with four modules per side -- instead of six -- might very well have been a better match for this room.

Bass integration is rarely easy, particularly with speaker systems like this one that mix dynamically driven bass drivers with fast-moving midrange and high-frequency drivers such as planars, electrostats, and ribbons. Takesh states that his speaker integrates exceptionally well with the subwoofer system since both share the same dipole radiating pattern. Despite my suspicious nature, I found the integration to be much better than I had anticipated. 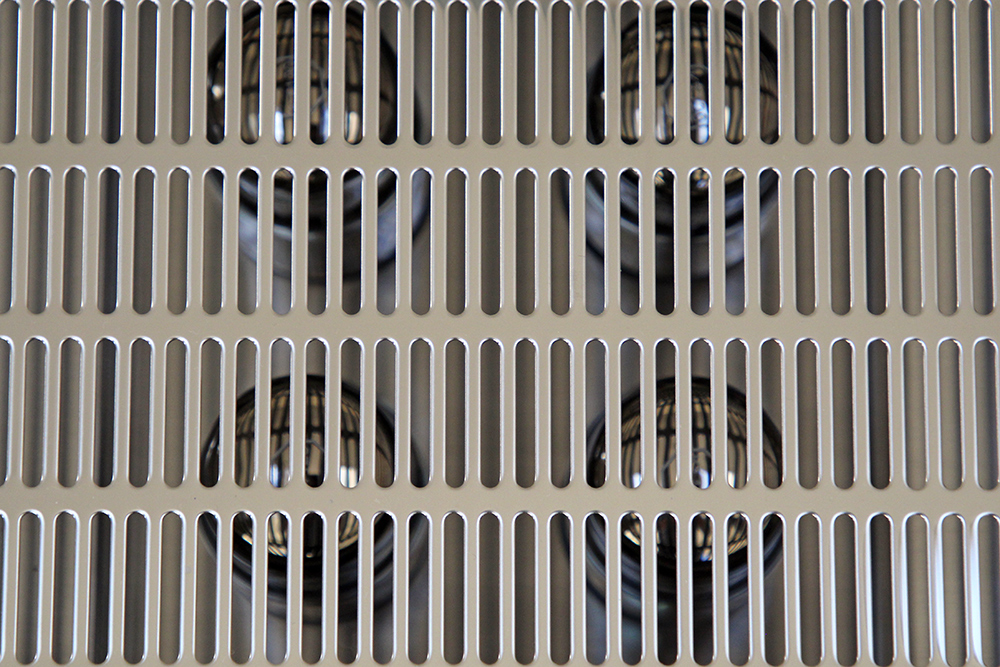 Yes, the high-end audio market can sometimes seem like a small one. But this demo proved to me that no matter how much you think you’ve seen, there are manufacturers with interesting products that you either have never heard of or know little about. While Zanden Audio Systems was already on my “keep an eye on” list, GT Audio Works, Sound Insight, and Triode Wire Labs are new additions. I will also be on the lookout for the Zanden room treatments. Undoubtedly, I will cross paths with these companies again. Stay tuned.