Doug Schneider, the SoundStage! Network’s founder, isn’t much into audio gimmickry. He’s seen a lot of products in his 26 years as a journalist, and he pretty quickly separates the wheat from the chaff. Products that are based on suspect or imaginary technologies don’t get much attention from him.

So it was interesting when Doug sent me a press release about the Forty-10 ($35,000 USD per pair), a technologically unusual but handsome speaker from a new company, Philadelphia-based MC Audiotech. Doug thought this speaker might be worth checking out, so I figured I’d soon be heading to Philadelphia, known for, among other things, its unique pretzels. They’re formed into a figure-eight pattern and arguably chewier than the more traditional large-looped pretzel variety, and I always get one when I visit that city. I visited on February 24. 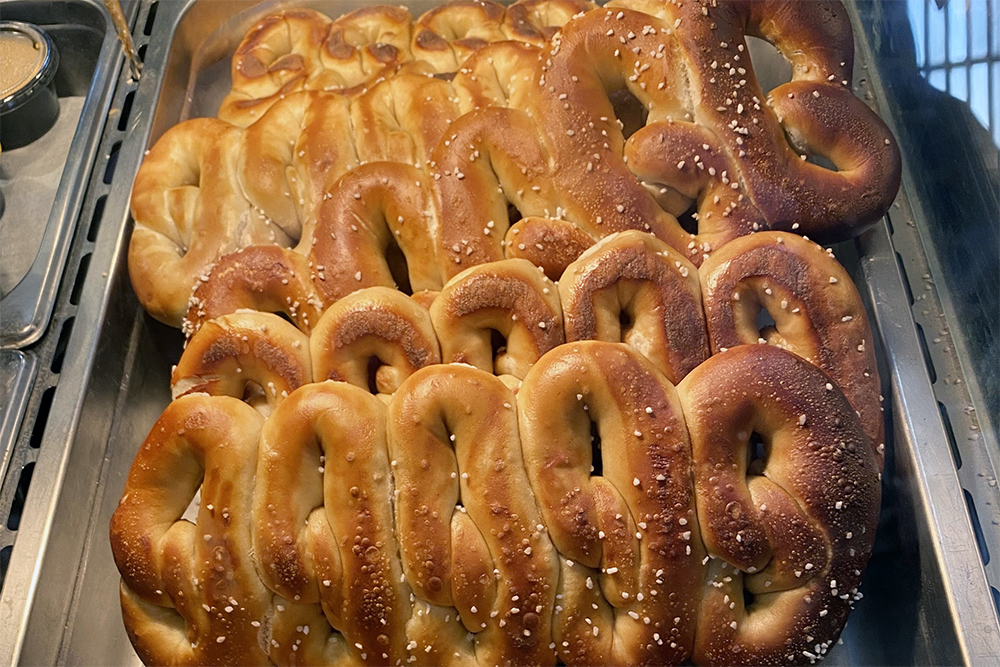 The people behind the Forty-10 are Mark Conti (hence the “MC”) and Paul Paddock, MC Audiotech’s manager and designer, respectively. Conti, whose background is in the sale of milling machines, grinders, and other computerized machine tools, is no stranger to high-end audio. He was a driving force behind the audio companies Impact Technology and Veloce Audio, the latter of which was known for its battery-powered components. A musician and inventor, Paddock co-founded Linaeum Corporation, which, among other things, licensed dipole line-source tweeter technology during the 1980s and 1990s to RadioShack for its Pro LX5 speaker and Optimus Dipole tweeter. 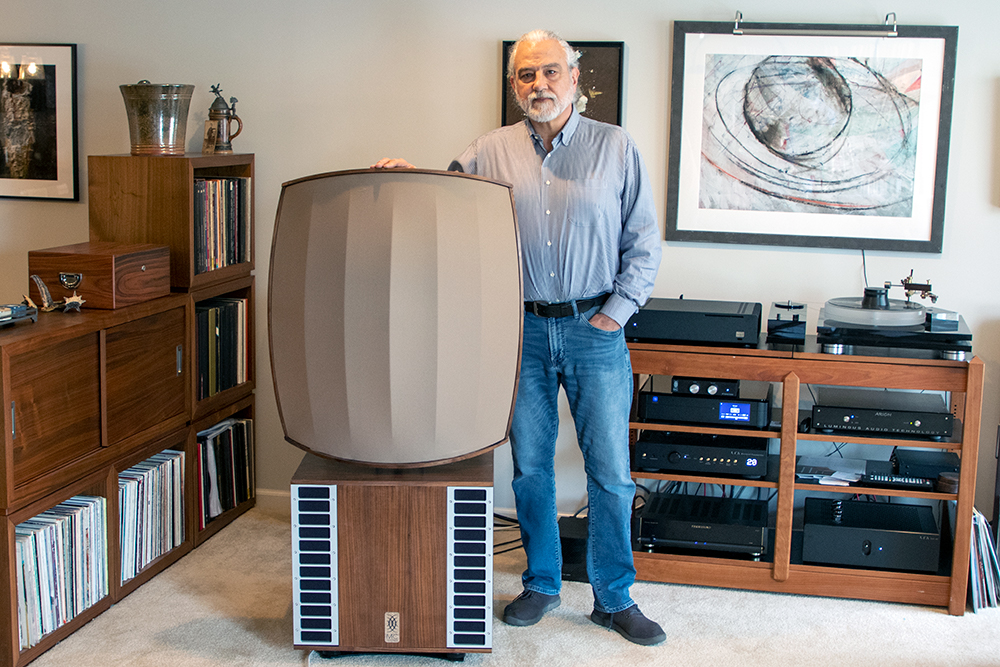 Mark Conti and the Forty-10

The Forty-10 and the bending wave technology 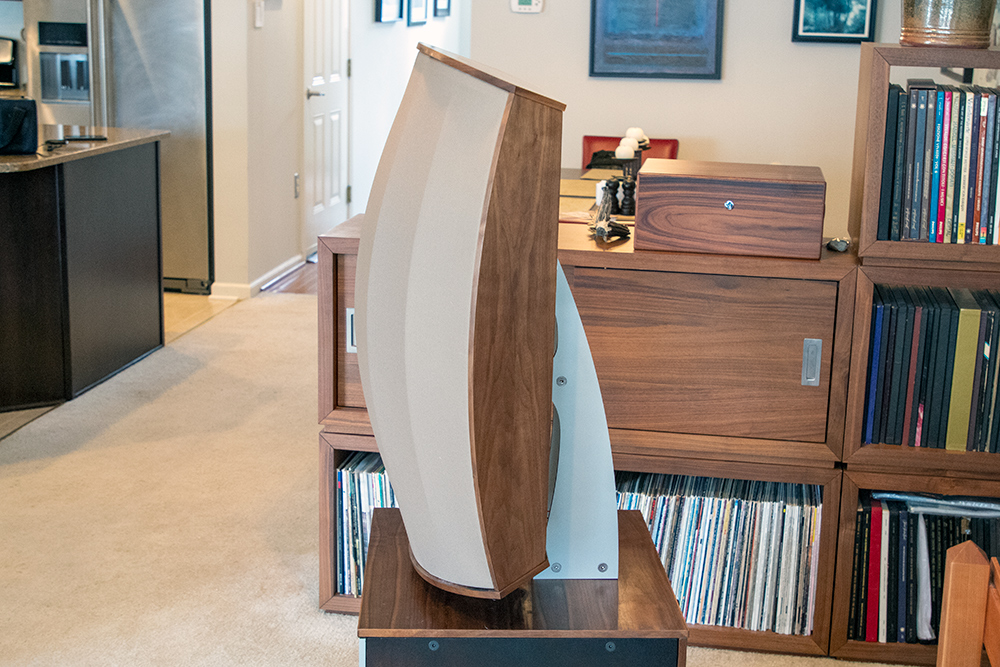 Falling within the category of “bending” or “traveling wave” transducers, each WBLS transducer consists of two paper-thin, flexible, curved plastic membranes that meet at one of their sides. A wire loop, bonded to the membranes at that point of contact, interacts with two magnets, one on each of the loop’s sides, thus creating a ripple within the membranes that projects a soundwave. The effect is similar to dropping a stone from a bridge into a body of water. The water’s surface is disrupted by the stone’s transferred energy, which propagates through the water in all available directions. MC Audiotech states that flexible membrane drivers like the WBLS, which date back to the 1920s and 1930s, were never commercially feasible until Linaeum introduced its transducer.

The WBLS transducers are suspended on top of the Forty-10’s lower bass cabinet and mounted in an open-baffle upper module that MC Audiotech calls a “space array.” This signifies that the transducers’ placement arrangement is horizontally and vertically curved. A user-supplied amplifier drives the array. 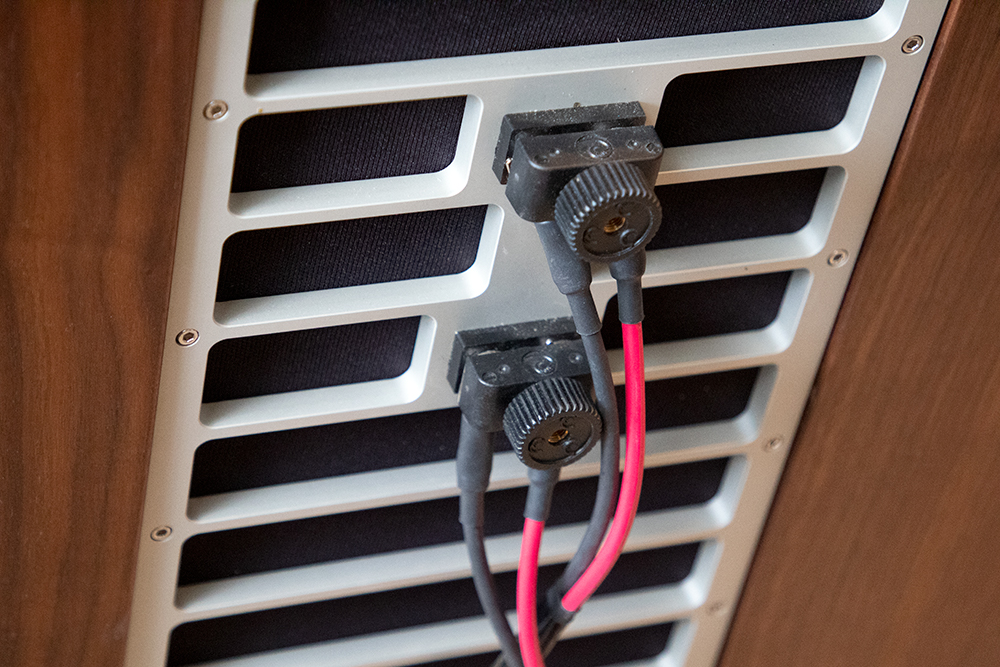 The back of the Forty-10 bass cabinet

The Forty-10’s “folded cube” bass cabinet contains two enormous 18" pro audio woofers in a compact dipole arrangement that are connected to a second user-supplied amplifier, thus completing the speaker’s biamp configuration. The cabinet contains three large, striking aluminum grilles, two in front and one on the rear. The woofers’ movements force air through these grilles, thus effectively rendering it open-baffle as well. The grilles are sized so as to place the woofers under slight compression, which MC Audiotech claims improves sound quality.

The array and bass cabinet are crossed over at 100Hz. The weight of the speaker is approximately 175 pounds. MC Audiotech states that it is flat off axis, within 2.5dB over +/- 60 degrees. An analog, hybrid passive/active control box is included to trim the bass output to both the upper array and the room. While the circuit path that provides the signal for the upper array is passive, the one used to adjust the bass signal is active. 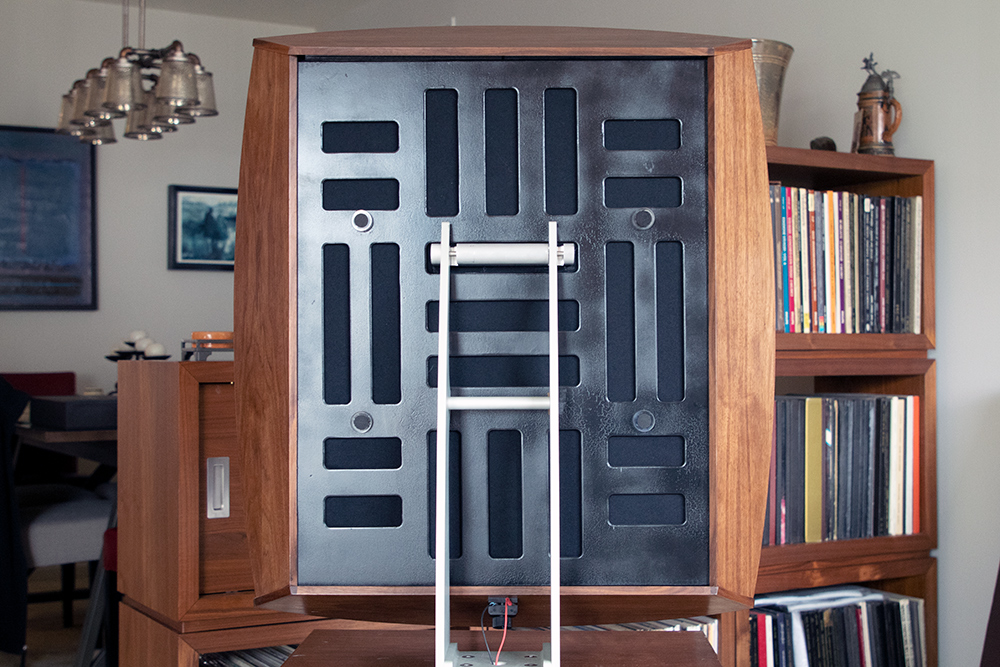 Behind the top panel

MC Audiotech states that the Forty-10’s space array and bass cabinet are rated at approximately 96 and 95dB sensitivity, respectively, and thus can be effectively driven by amplifiers of as little as 20Wpc.

Aesthetically, the Forty-10 has its roots in mid-century design. Its satin walnut veneer bass cabinet and upper array trim, gorgeous metal work, and large off-white grille cloth make quite a statement. (Other material finishes, such as a figured maple veneer with black aluminum grilles and golden-brown upper grille cloth, are also available.) 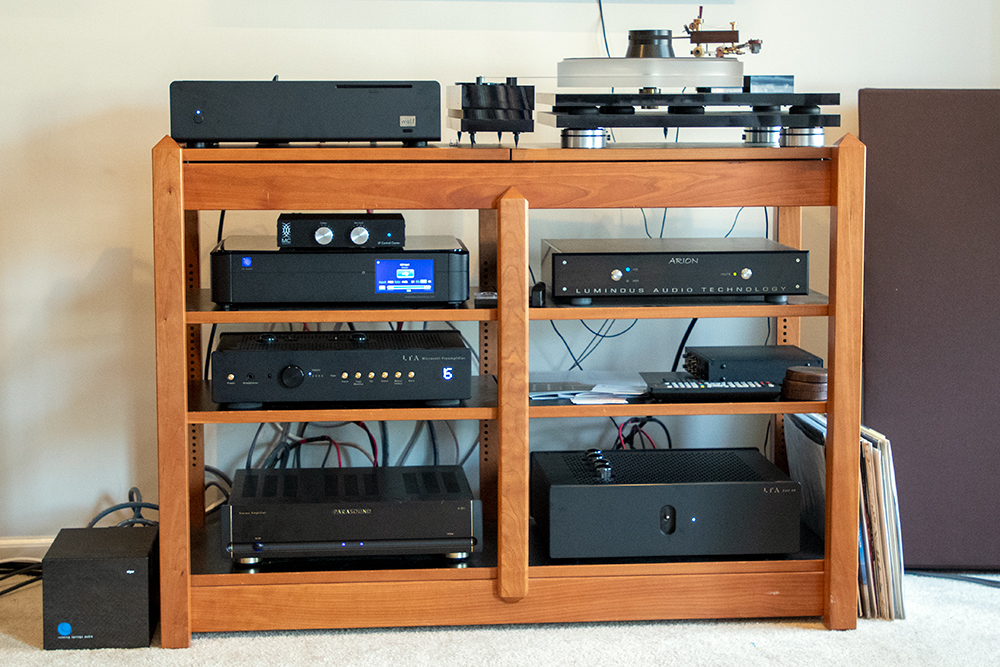 Conti states that due to the Forty-10’s dispersion pattern, a pair of speakers can pretty much be placed almost anywhere with excellent results. For example, since there’s little output on the speakers’ sides, each speaker can be placed close to a room’s sidewalls.

The audition mostly involved downloaded digital music files played from the Wolf server and streamed from Tidal. However, the turntable was pressed into service for several tracks.

Due to the Forty-10’s technological underpinnings, I figured that its sound would be large, fast, and highly transparent with a very large sweet spot. Since speakers with broad dispersion patterns can sometimes lack focus and the ability to create finely pointed images, I also figured that its sonic images might be somewhat diffuse. I was only partially right.

Yes, the Forty-10 is very fast and transparent. However, images were focused and three-dimensional. Moreover, calling the sweet spot a “spot” does the speaker an injustice. While music was playing, I listened while standing up, moving around the room, and even sitting on the floor. Finding a place where the performance suffered was surprisingly difficult. This is a speaker that allows you to have a group of people over for a listening party. 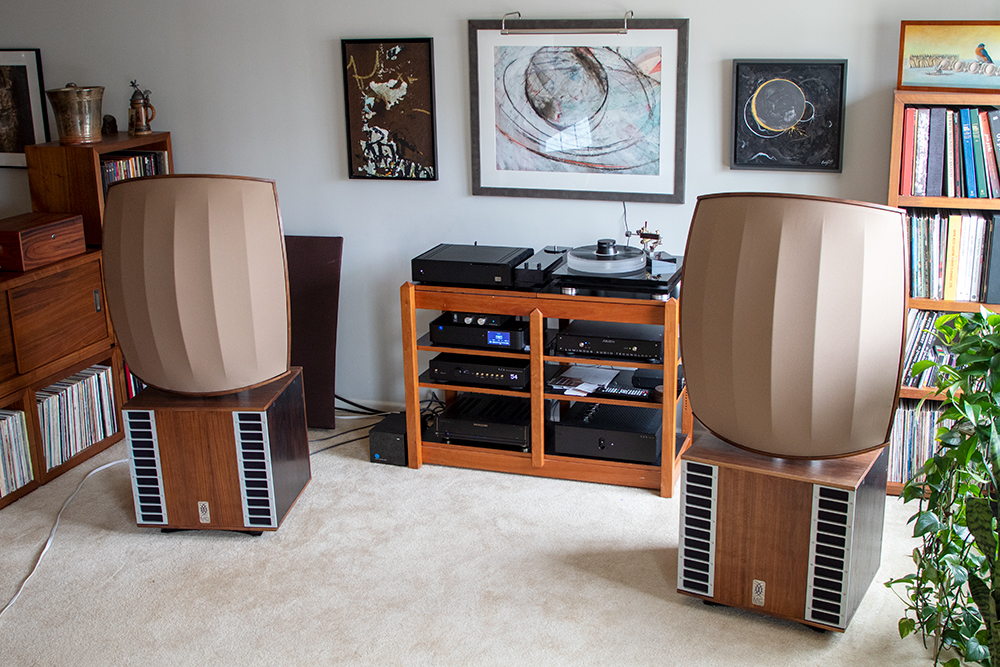 On London Grammar’s “Hey Now,” from the If You Wait album (LP, Sony Legacy), Hannah Reid’s voice hung in the air with effortlessness, delicacy, and transparency. The song’s uncommonly deep bass notes were textured and controlled. Further, the soundstage was laterally very extended.

The Forty-10’s ability to reproduce detail and texture was evident on Yosi Horikawa’s “Bubbles,” from the album Wandering (16-bit/44.1kHz FLAC, First Word Records / Tidal). That track appears to be a recording of small objects being dropped onto a hard surface backed by subtle and soothing melodies. These sounds were reproduced with a cleanness and liquidity that not many other speakers can achieve.

Conducted by Donald George Johanos, the Dallas Symphony Orchestra’s version of Sergei Rachmaninoff’s “Symphonic Dances,” from Rachmaninoff: Symphonic Dances; Vocalise (LP, Athena Records), suffers from overplay at audio shows and other demos. Still, on the Forty-10s, it demonstrated the speakers’ ability to sort through large-scale, complex works and to orderly present the orchestral sections on an uncommonly large, airy, and three-dimensional soundstage. 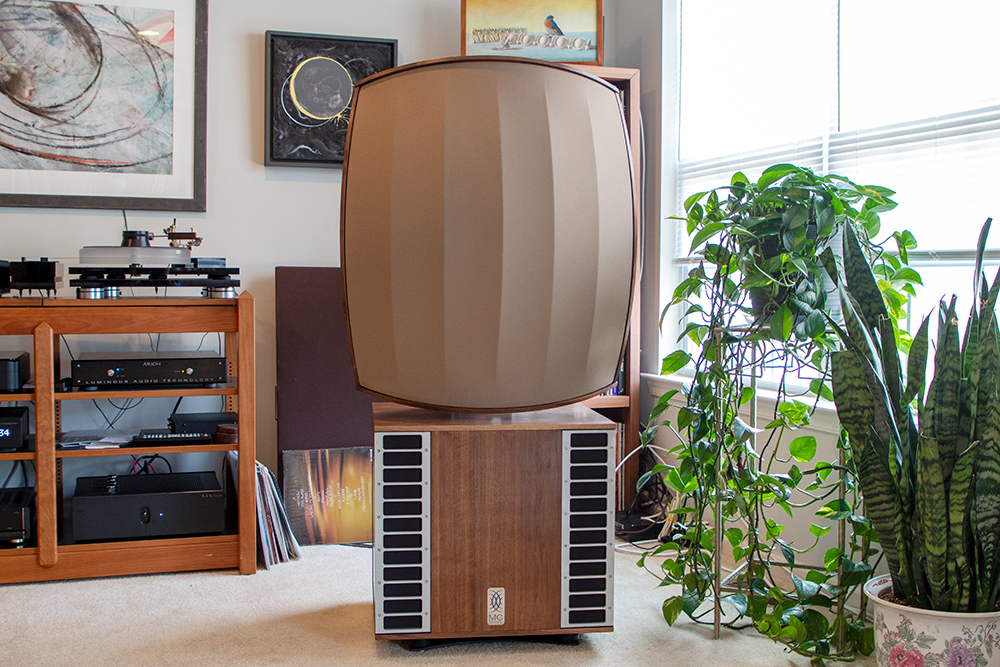 In fact, the Forty-10s sounded so good with the Linear Tube Audio and Parasound gear that I wondered what their sound would be like if they were paired with a pair of high-power statement amps. The answer to that question awaits another day.

My time with Mark Conti and MC Audiotech’s Forty-10 proved that Doug Schneider was right -- the speaker was worth traveling to Philadelphia to check out. I’ve also made a mental note that the next time I’m in that city I’ll need to bring home a bag or two of those pretzels. My visit also reinforced something that I already knew: when it comes to audio, there’s more than one way to Rome.