A Visit to Bache Audio

Located in Brooklyn, New York, Bache Audio mostly manufactures audiophile speakers. On July 5, 2020, Greg Belman, Bache’s founder, invited me over for a listening session. It was my first face-to-face audio meeting since the global pandemic’s start.

I first met Belman several years ago when I attended a demonstration of Bache’s speakers at the New York-based Audiophile Society. At that demo, the speakers were successfully paired with tube electronics from Alexus Audio. Belman is good friends with Alexus’s founder, Alex Chorine, and as discussed below, the two have collaborated professionally. Although both Belman and Chorine are formerly from Russia, the two didn’t meet until they came to the United States.

When I arrived, Belman greeted me at curbside. After some catching up on the busy city street, Belman and I headed to Bache’s showroom, behind which lies a small product assembly area. 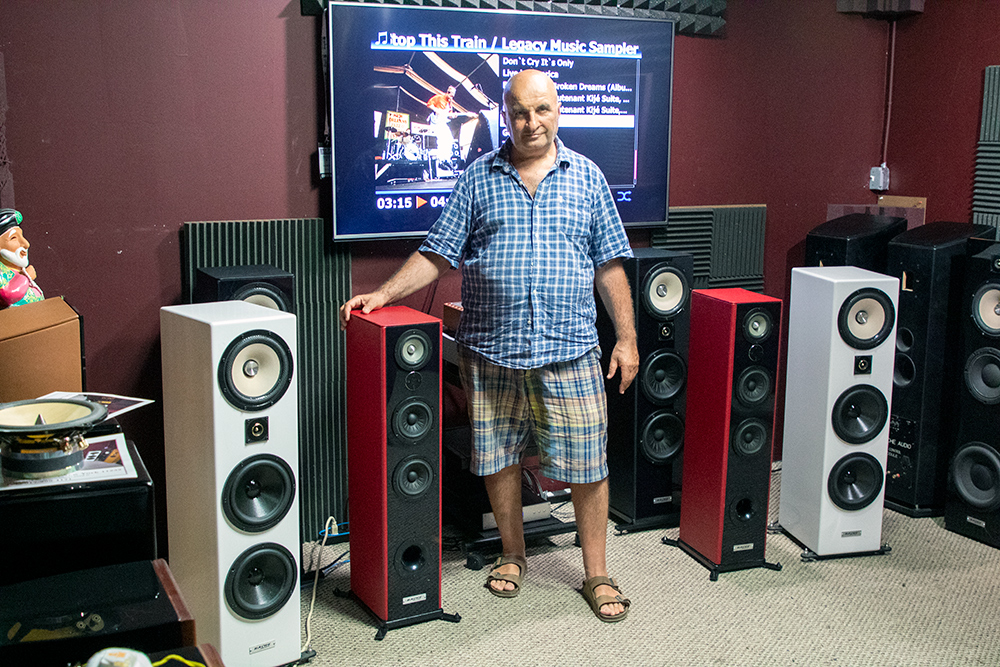 Bache is a one-man operation. As such, Belman handles all of the company’s activities, save for some heavy physical work that his son handles. Belman came here from Orenburg, Russia, an old fortress city that lies on the Ural River, about 900 miles southeast of Moscow. When in Russia, Belman worked as an electrical engineer at a top-secret military manufacturing facility. When I asked him what types of things he worked on, he told me that although he had intimate knowledge of the devices that he designed, he wasn’t privy to the types of end products they were used in. I took him at his word.

Belman told me that around 2010, he began designing and building single-driver speakers. These speakers don’t exhibit the reported driver cohesiveness problems that can be associated with speakers employing multiple drivers, and thus one or more crossovers. I advised Belman that designing a single-driver speaker seems very difficult, since that driver needs to cover the entire frequency band. He agreed, stating that one problem with such speakers is that they perform poorly at the frequency spectrum’s upper and lower ends. Belman further stated that he tried adding a tweeter to his early speaker models, but he got poor top-end results. He also tried pairing the speakers with subwoofers, but he found that a suck-out in the upper bass to middle-midrange region of about 100 to 500Hz caused voices and instruments such as piano and cello to sound thin. 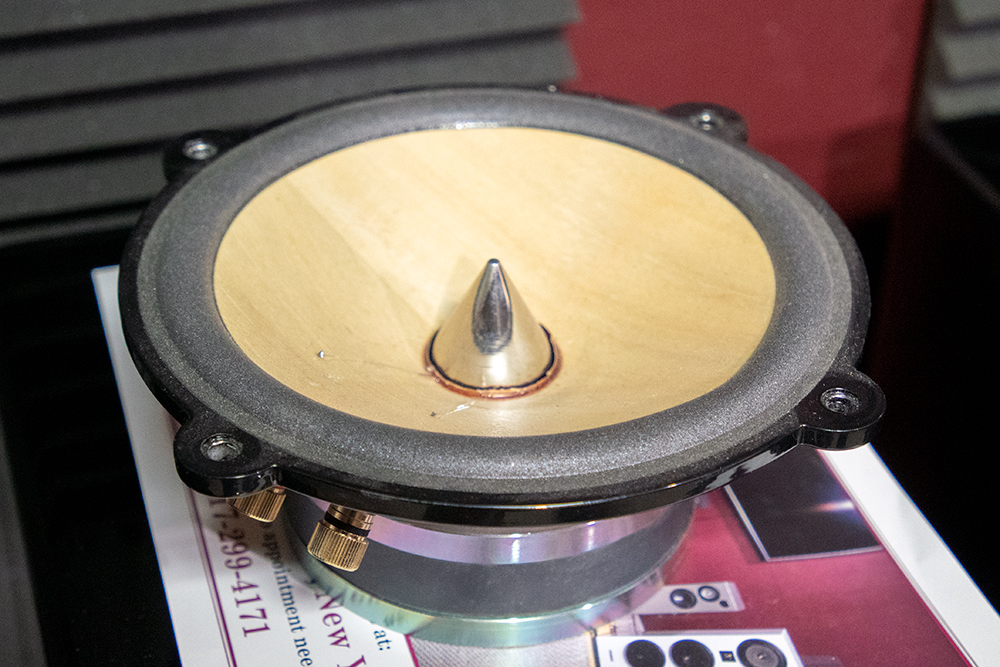 What Belman ultimately gravitated toward was the so-called “augmented wide-band” (AWB) speaker, which uses a single wide-band driver that covers a large portion of the audible frequency band, accompanied by several of what he calls “helper” drivers, in this case a super tweeter and one or more woofers. Belman said that this hybrid design incorporates the best attributes of the one-way designs (exceptional dynamics and coherence) and their three-way counterparts (excellent frequency extension and dispersion characteristics, along with the ability to play loudly without distorting).

People who heard Belman’s AWB speakers were impressed. In fact, he soon developed somewhat of a cult following. In 2013 Belman started Bache. The company’s current speaker models, made in small runs, range in price from $2500 to $14,000 per pair (all prices USD).

The small 225 sq. ft. showroom had a ceiling that was at least 10’ high. Its audio system, which Belman also uses to voice his speakers, consisted of a Cocktail Audio X50(D) music server and a 500W AB Audio class-D integrated amplifier. AB, named from the first letters of “Alexus” and “Bache,” is a joint venture between those two companies. 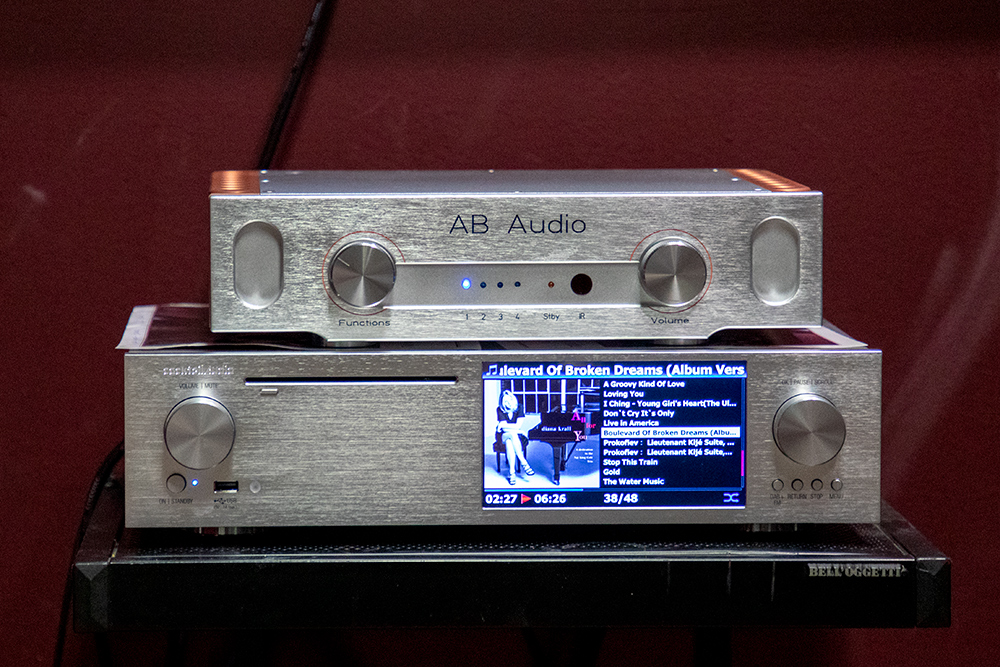 The room contained many Bache AWB speakers. However, the ones Belman most wanted me to hear were the Lexington-001 and Tribeca-001 speakers ($3700 and $5600 per pair, respectively).

The Lexington-001, rated at 90dB sensitivity, is designed for small-to-medium-sized rooms, perhaps one in an urban apartment. It has a 1" AMT (air motion transformer) super tweeter, 4" W4-1320 Tang Band full-range driver with a paper-bamboo-blend cone and underhung 1" voice coil, and two 5.25" Eton woofers that each feature a nonwoven carbon fiber and Kevlar composite cone. As several other speaker designers have done before him, Belman removes the Tang Band’s whizzer cone, which is a small secondary cone that radiates high-frequency sound more effectively than does the larger one. Belman feels that if left intact, the whizzer cone colors the sound. 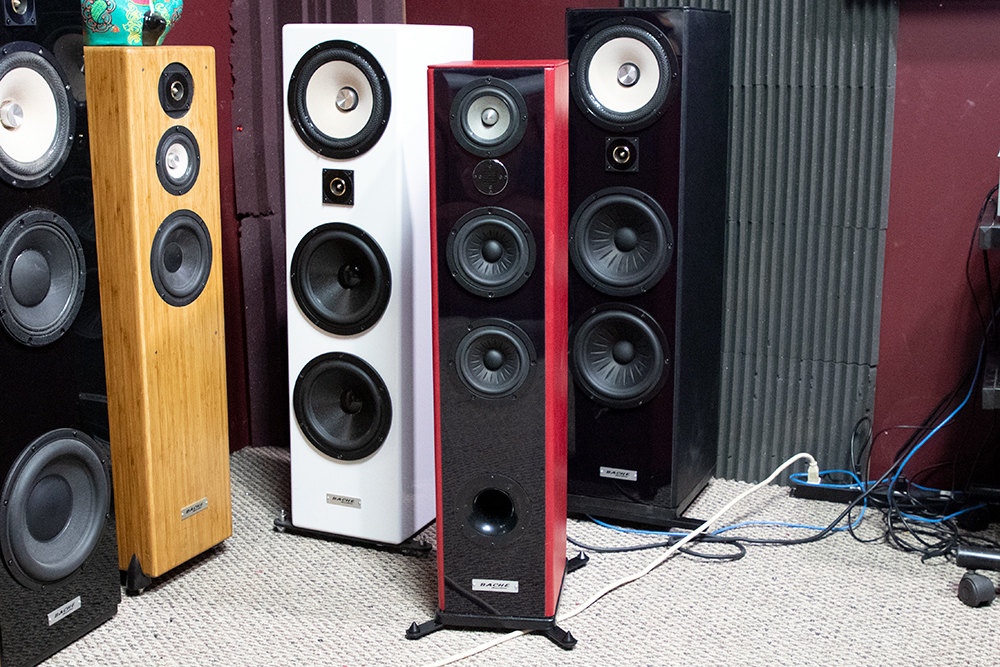 Belman said that the Tribeca-001, rated at 92dB sensitivity, is a good match for somewhat larger rooms and works well with a wide range of amplifiers, including many tube amps. It uses an expensive Japanese-made Fostex super tweeter, an 8" model W8-2145 Tang Band full-range driver with a bamboo-fiber-reinforced paper cone and underhung 1.5" voice coil, and two 8" Eton woofers.

Both the Lexington-001 and Tribeca-001 speakers are ported. They’re also minimally designed, using one pure copper capacitor per speaker to protect the super tweeter and one inductor coil to prevent high-frequency signals from being fed to the woofers. The speakers’ cabinets are constructed from MDF, which Belman can finish in virtually any color at no additional cost, and a wide variety of finishing materials. The pair of Lexington-001s that we listened to were tastefully bedecked in a red faux leather. The Tribeca-001s, also no slouches, sported a gorgeous piano-white finish. 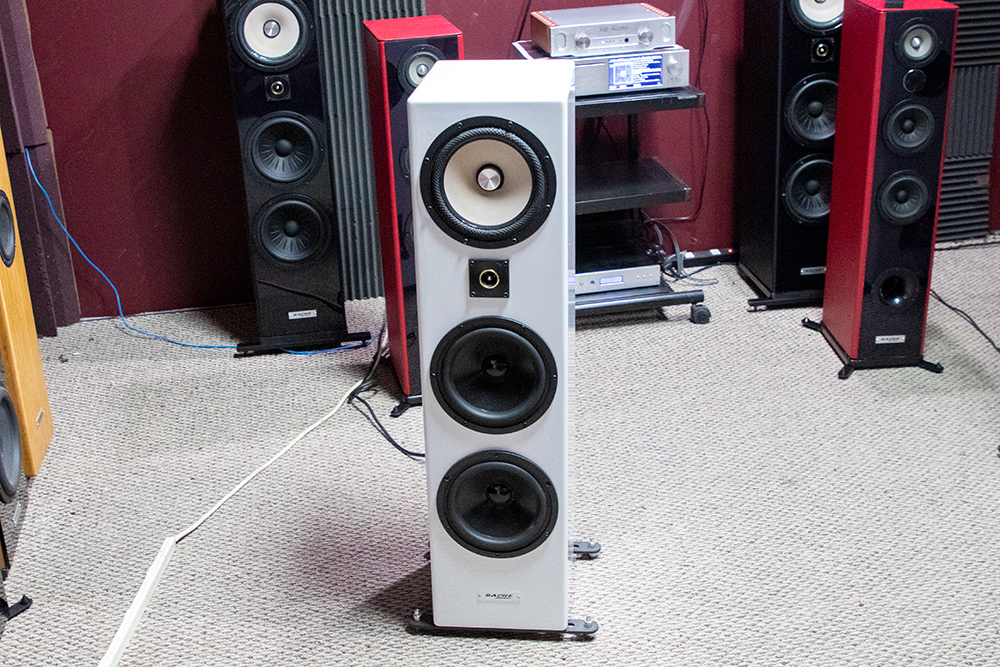 Although we didn’t get a chance to listen to them, the showroom also contained numerous high-sensitivity Bache AWB speakers that were designed for extremely large rooms, though they’re said to pair very well with even flea-watt amps. One such speaker was the Bache Audio 002AB ($12,500 per pair), which is rated at 96dB sensitivity and contains two 10" woofers, one powered and one passive.

When it was finally time to listen, I focused on whether the “helper” drivers assisted the Lexington-001 and Tribeca-001 speakers in doing things that many traditional single wide-band speakers have trouble with -- playing at loud volumes without distorting, producing a wide dispersion pattern, and excelling with both intimate acoustic music tracks and more complex ones, perhaps with substantial high-frequency content and low-end slam and impact. 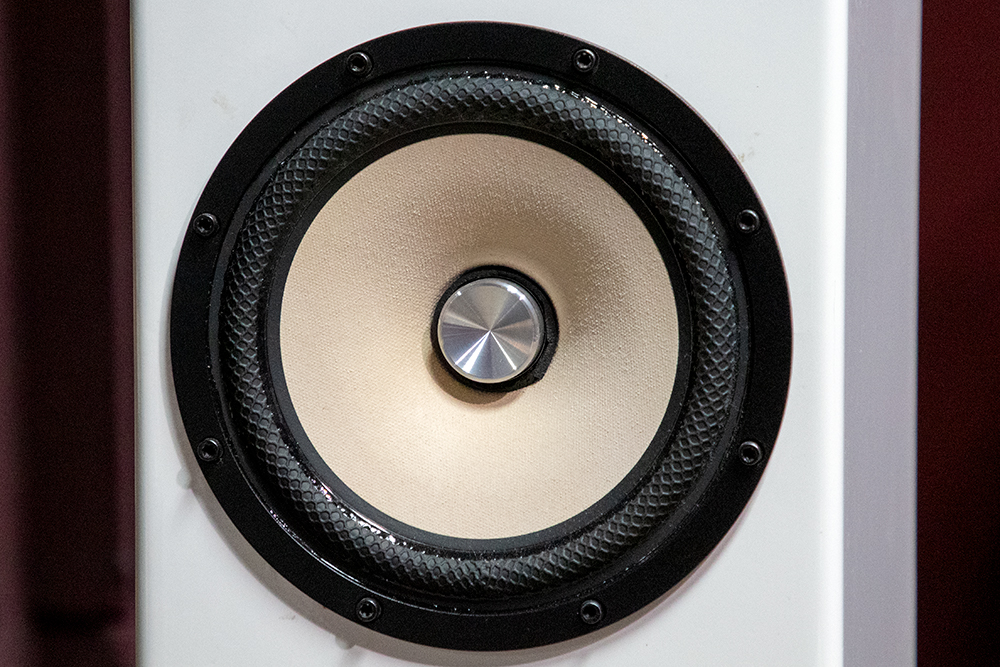 With both the Lexington-001 and Tribeca-001 speakers, Ella Fitzgerald’s voice was gorgeous, natural, relaxed, and coherent throughout her range. At many times the Baches’ cost, the very best dynamically driven speakers use crossovers that are eloquently designed to deliver this type of performance and more. Those much more expensive speakers also deliver even more detail than that provided by the Baches. However, the Baches made the reproduction of Ella’s voice by their price-appropriate competitors seem rough and jacked-up with unwanted energy.

Assumedly due to the helper drivers, the Lexington-001 and Tribeca-001 speakers had no problem playing at loud volumes. Even at such volumes, percussive strikes on “A Groovy Kind of Love” were punchy and articulate. The tuttis and bass drum attacks in the above London Symphony Orchestra movements were jarring in a good way. Also, assumedly due to the assistance of those drivers, there was no problem at the frequency extremes. Walking around the room while music was playing revealed good sound everywhere despite the removal of the Tang Band’s whizzer cone. 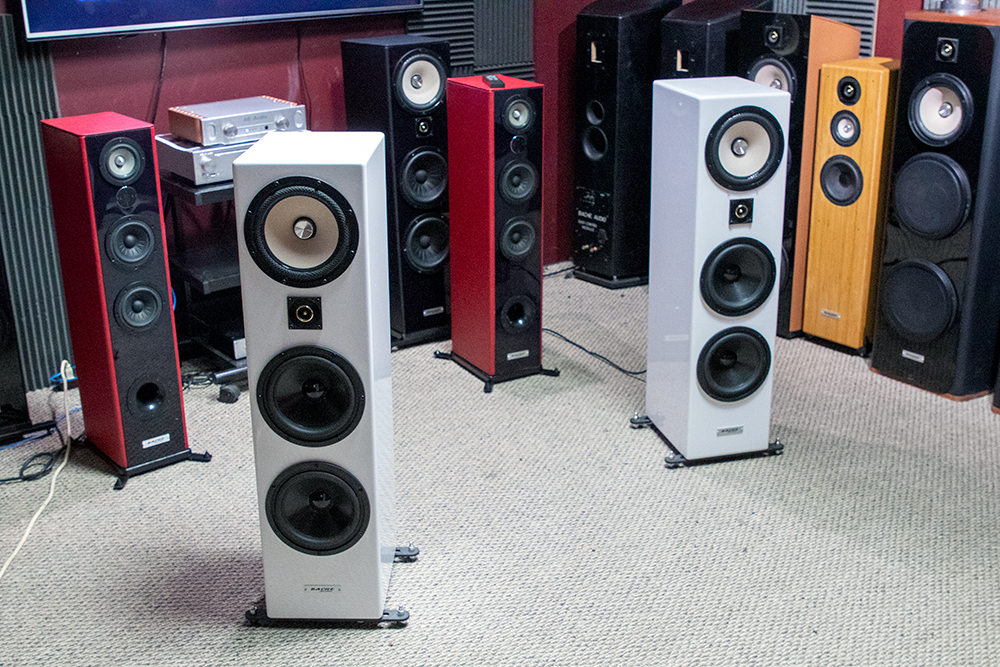 Finally, I needed more time with the Lexington-001 and Tribeca-001 speakers to make a definitive determination as far as sonic colorations. Any darkish colorations I detected were slight and pleasing, and they never subtracted from my listening enjoyment. There are competitor speakers that are more conventionally designed, but they might not produce the gorgeous midrange bloom and easy-to-listen-to and relaxed sound that the Baches do.

All speakers make sonic compromises. The ones made by Bache’s Lexington-001 and Tribeca-001 speakers, which favor a gorgeous midrange and excellent cohesiveness and perceived dynamic range, will appeal to many. So it’s no surprise that Bache’s augmented and modified wide-band dynamic-driver speakers have garnered a cult following. If more audiophiles give them a listen, the cult may be headed for a substantial membership expansion.