Reasonable or not, we all have our biases. One of mine is that I am generally reluctant to buy an audio cable or power cord from a component manufacturer. Frankly, when someone mentions that they’ve done just that, I cringe a bit inside. But I always hold my tongue, especially if they have already completed the purchase.

It’s not that component manufacturers can’t make great cables or cords. Certainly, some do. However, cable craft is a world unto itself, and when navigating that world, I prefer to deal with a specialist. Also, in my opinion, many of the component makers assign insufficient importance to the role that cables and power cords play in an audio system’s relative performance. Just look at the molded cords, afterthoughts at best, that typically accompany audio components. Indeed, some component makers seem to have only recently entered the cable and power cord market in search of nothing more than revenue growth. 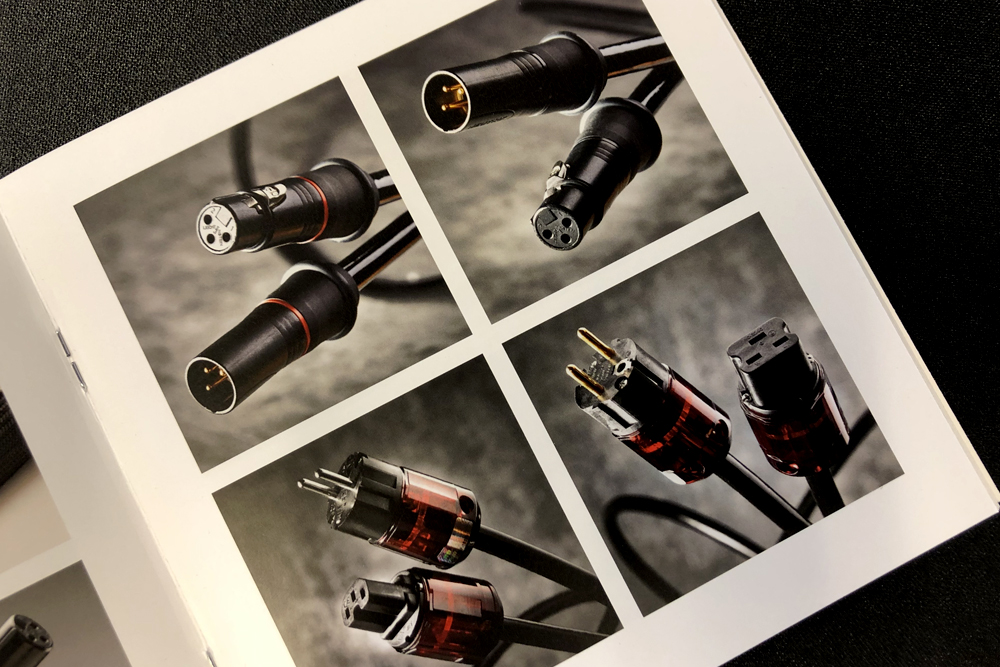 However, when I heard that Denmark’s Gryphon Audio Designs had introduced a new line of flagship cables and power cords called Vanta, I was uncommonly intrigued. I’ve been impressed by Gryphon’s components as of late, finding the company’s Zena preamplifier, for example, to be as harmonically dense in sound as any solid-state competitor that I’ve heard. That’s no backhanded compliment. If I were putting together or adding to a stereo system right now, the brand would be on my shortlist. Also, as discussed below, Gryphon is no cable newcomer that has historically downplayed the product category’s importance.

Wanting to learn more about the Vantas, I reviewed several of Gryphon’s white papers as well as the company’s website. I also participated in a video call with Rune Skov, Gryphon’s global sales director, who is located in Denmark. Below is what I learned.

Flemming E. Rasmussen started Gryphon as an offshoot of his company 2R Marketing, which during the 1970s and ’80s imported into Denmark high-end audio gear from such companies as Classé, Infinity Systems, Kiseki Audio, and Krell Industries. Rasmussen was long interested in audio cables, and beginning in 1989, 2R Marketing designed, manufactured, and marketed numerous high-end cables. In fact, Skov told me that 2R Marketing was the first company outside of Japan to source pure-copper Ohno continuous casting (PCOCC) wire and use it in a cable conductor. Also, 2R Marketing made cable connectors on an OEM basis for Oehlbach Kabel GmbH, a German audio/video cable and electronics product manufacturer. 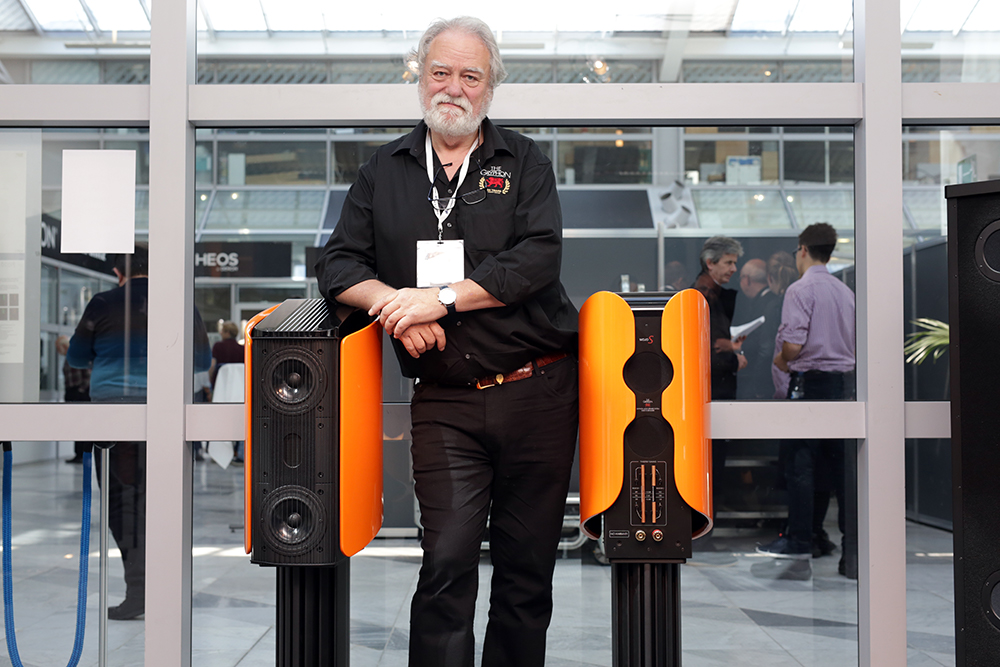 Further, mostly as a hobby project for Rasmussen, 2R Marketing designed and built a step-up phono-signal component called the Gryphon Head Amp. When members of the audio industry and the public became aware of this component, it was an immediate hit, garnering sufficient interest, particularly at first in Japan, to justify Gryphon’s creation as a company in 1985. The Gryphon name and logo were inspired by the Greek mythological creature, which possesses the head and wings of an eagle and the body, tail, and rear legs of a lion. To Rasmussen, this creature symbolizes the union of the lion’s power and the eagle’s grace, resulting in the forceful elegance that he sought to achieve with Gryphon’s audio gear.

After the Head Amp’s success, Gryphon moved forward with the design and manufacture of other audio components, which were also extremely well-received. In 1990 Gryphon began selling audio cables. In 1993 it ceased importing third-party gear. While Rasmussen is no longer involved in the company’s daily operations, he is still responsible for the operational and aesthetic design of some of the company’s key products. 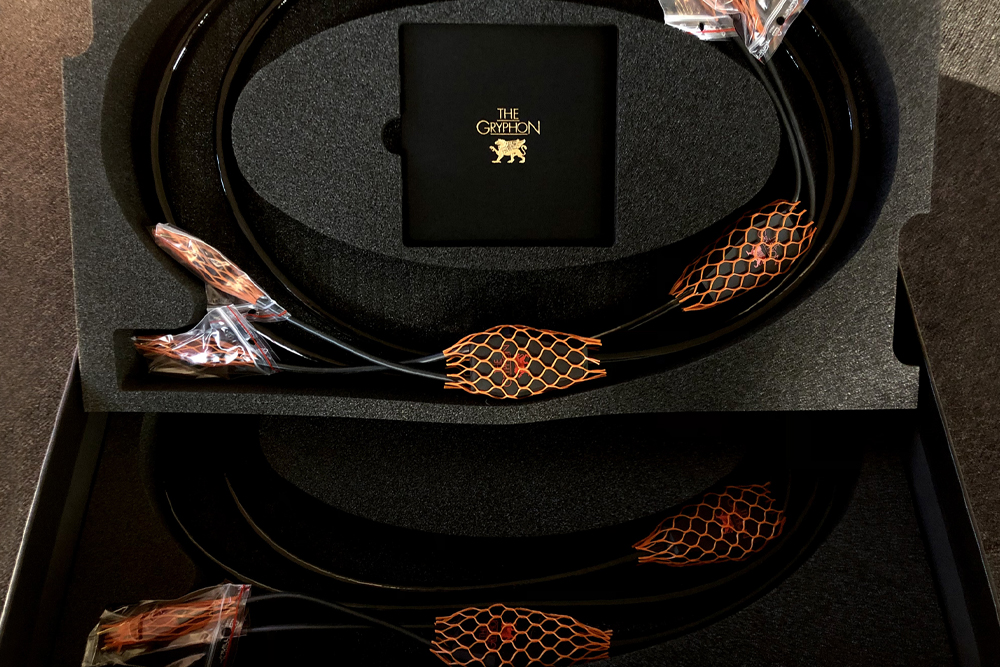 Gryphon’s website introduces the Vanta cables from a decisively component manufacturer’s perspective: “to judge by some cable manufacturers’ ‘technical’ explanations, you could be forgiven for thinking that cable differences are voodoo, magic, or hallucinations.” However, “there are straightforward physics that govern impedance, inductance, capacitance, and hysteresis and, through them, sonic performance.” Similarly, the website states that, while some cable manufacturers tweak their products to create a sound that is, among other things, forward, recessed, dark, or bright, the Vanta cables do not act as colorizing sonic filters and have no “house sound.” Instead, as with all of Gryphon’s products, the Vanta “sound” is one of “neutrality, purity, and accuracy.” Skov also told me that Gryphon doesn’t want the company’s cables to alter the sound of the components to which they are connected.

One thing about Gryphon’s cables in general—they’ve had extremely long production cycles. For example, the company’s Guideline cables have been in production for an astonishing 23 years. According to Skov, when Gryphon introduces a cable, it does not engage in planned product obsolescence and holds nothing back in design or manufacturing expertise. Rather, Skov told me, every Gryphon cable is the result of an extraordinary investment in money and engineering time by the company.

According to Gryphon, the Vanta cables and power cords all have a few things in common: superior build quality and thus mechanical stability; expensive, proprietary gold and silver alloy, ultra-pure, solid-core conductors that are made from a sophisticated extrusion process aimed at reducing crystal boundaries (this alloy is said not to degrade in performance over time as other cables are claimed to do); proprietary insulation that reduces RF interference and thus noise, grunge, and coloration; dielectrics that do not smear or otherwise degrade the signal; and connectors that are proprietary or sourced from top manufacturers such as Oyaide and Neutrik and precision soldered under a microscope. 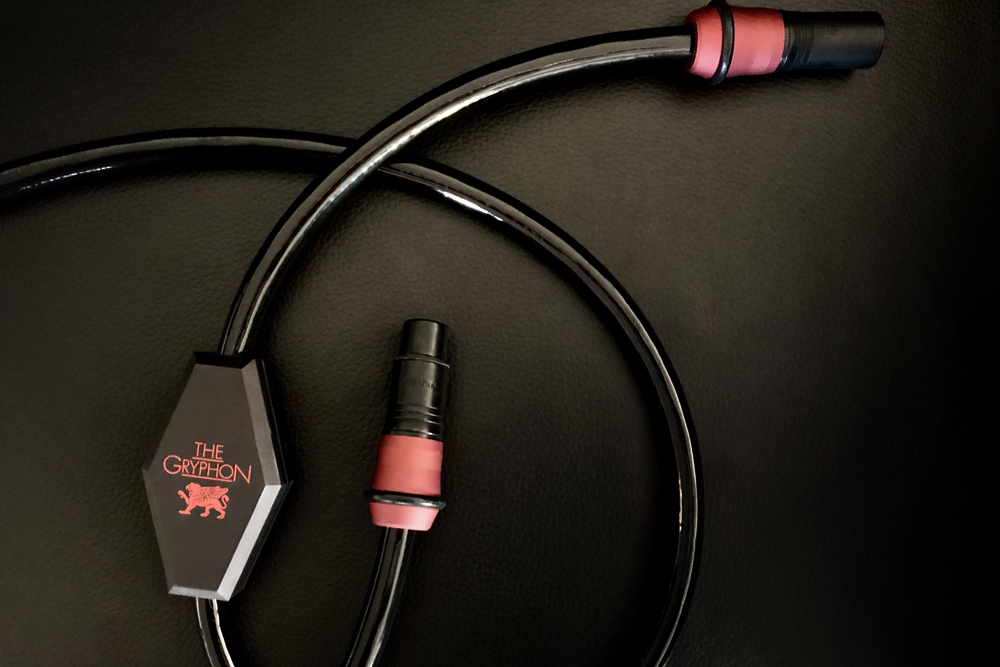 The Vanta analog cables consist of a speaker cable and an interconnect. The speaker cable’s geometry features two 13-gauge solid-core conductors per channel that are constructed from the proprietary silver and gold alloy. The conductors are contained within a complex arrangement of large polytetrafluoroethylene (PTFE), aka Teflon, insulating tubes: five smaller tubes keep the four large tubes in place, all of which are held together by a thin PTFE binder layer that’s in turn surrounded by a passive shield made of braided silver-plated copper wires. Surrounding the shield is a binder layer of non-woven polyester foil. On the cable’s exterior is a polyurethane jacket. The cable’s proprietary connectors, available in spade or banana terminations, consist of gold-plated solid copper in an anodized aluminum housing.

The Vanta interconnect features a geometry that is similar to the speaker cable, but uses two 16-gauge runs of the solid-core conductors. The single-ended RCA and balanced XLR connectors are from Neutrik, though the RCA connectors are modified by Gryphon before being soldered to the conductors. 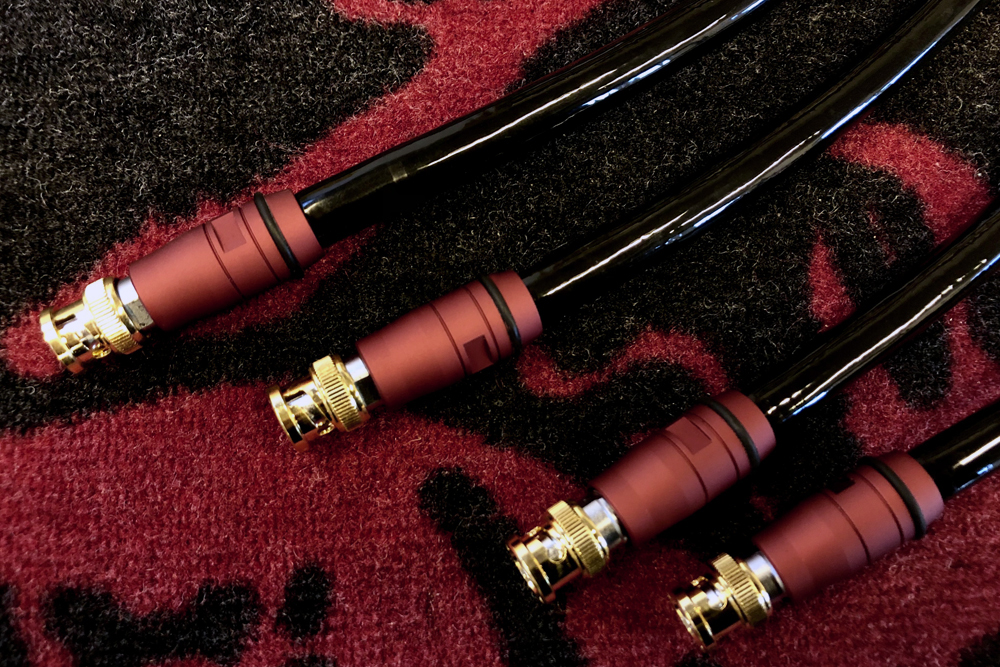 The Vanta digital cable comes in BNC-terminated S/PDIF (75-ohm) and XLR-terminated AES/EBU (110-ohm) versions, both of which employ, from the interior to the exterior, two runs of the solid-core conductors, here 21-gauge, that are twisted into a helix pattern; a two-tube version of the PTFE insulation; two binder layers, one of stranded polyester fibers and the other of PTFE; an insulating tube of soft and flexible silicone-based rubber; a braided shield of silver-plated copper wires; a binder of non-woven polyester foil; and a polyurethane jacket. The gold-plated, copper-pinned BNC connectors, sourced from Oyaide, are insulated with PTFE and placed in an anodized aluminum Gryphon-designed housing. The XLR connectors, sourced from Neutrik, contain gold-plated deoxidized phosphor bronze connection pins and are also placed in the anodized aluminum housing.

Finally, the Vanta power cord, which is available in 15- and 20-amp versions, features three of the solid-core conductors (two 13-gauge and one 16-gauge), a braided shield of silver-plated copper wires, an insulating tube made with silicone rubber, another insulating layer made of PTFE, and a polyurethane jacket. The cord’s connectors, sourced from Oyaide, use blades constructed of gold and palladium-plated deoxidized phosphor bronze. 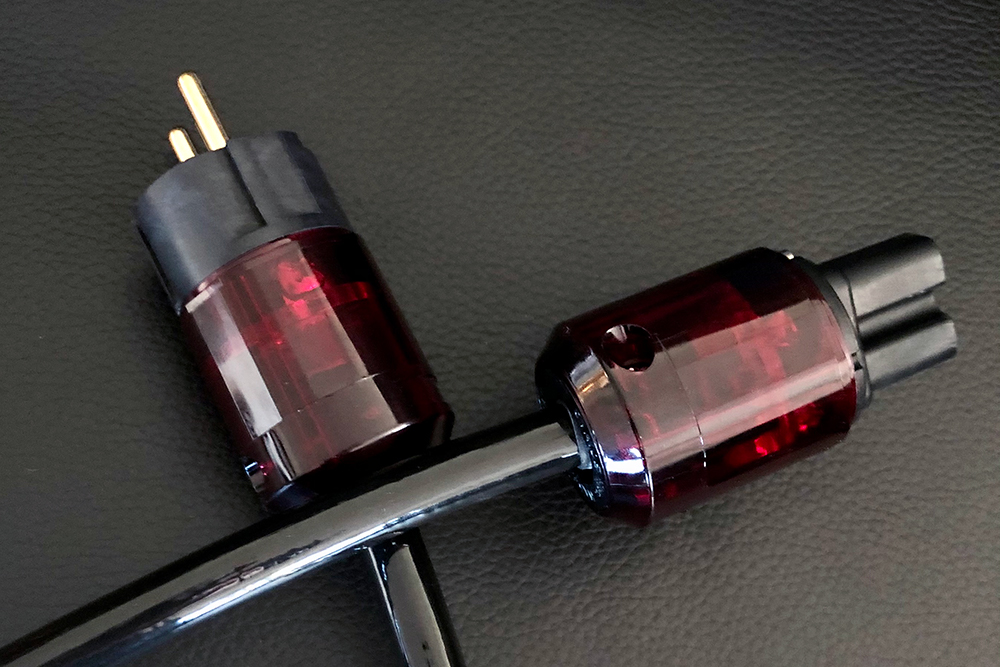 As flagship Gryphon products, the Vanta cables and power cords are not for those who are faint of wallet or purse. To provide some sample prices, a stereo pair of the Vanta speaker cable, 3m in length with spade or banana connectors, retails for $21,400 (all prices USD). A stereo pair of the Vanta interconnects, RCA or XLR, retails for $6500 per 1m length. The series’ power cords cost $5150 for a length of a meter and a half, and the digital cables cost $4000 for a 1m length.

Reasonable or not, I’m still reluctant to purchase a cable or power cord from a component manufacturer. However, based on what I now know about Gryphon and the Vanta line, these cables and cords might very well constitute an exception to my general inclinations. They appear to be the real deal.