Last week, Bowers & Wilkins announced its new Formation line of wireless products, which I first read about on our SoundStage! Australia website. It really piqued my interest.

On April 26 and 27, Hi-Fi Centre held its annual Vancouver Audio Festival, located right in its upscale-looking store, situated on the edge of the city’s historic Gastown district. Products from well-known manufacturers such as AudioQuest, McIntosh, Sonus Faber, Audeze, Astell & Kern, JVC, and Naim were featured, as well as the brand new YG Acoustics Vantage loudspeaker and the entire Bowers & Wilkins Formation lineup. As I found myself downtown on the Saturday -- which was a beautiful sunny day in Vancouver -- I headed down to Hi-Fi Centre to check out all the new Bowers & Wilkins Formation speakers, but particularly the Duo minimonitor, which retails for $3999/pair (all prices in US dollars), since it’s the model that really appeals to me and probably most audiophiles. 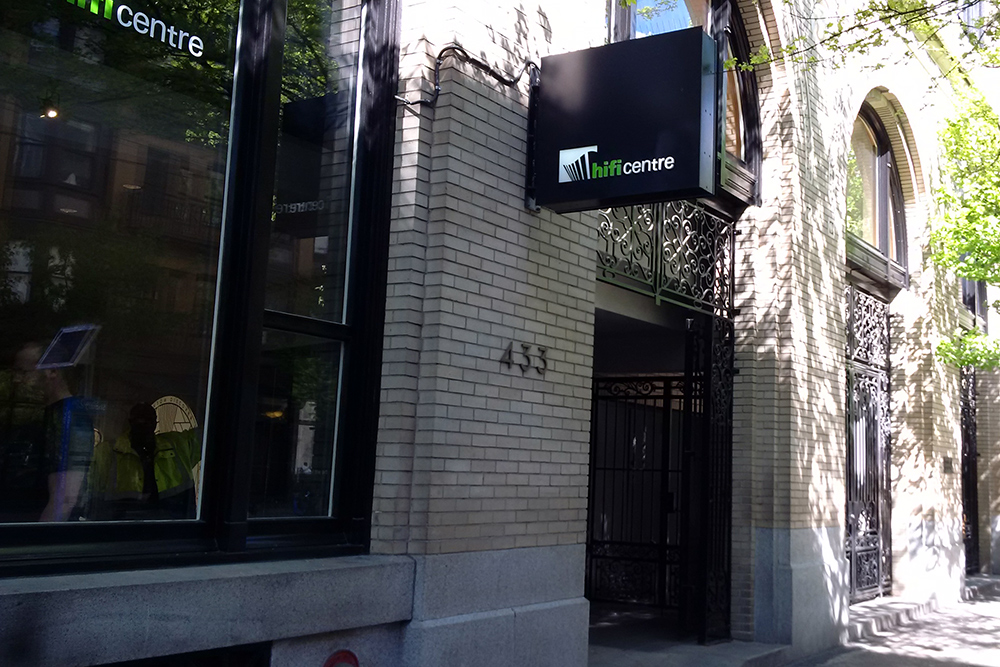 When I arrived at the store, I had to search around for the Formation speakers, which were situated in a room at the front, not along the sides or at the back of the building where most of the listening rooms are located. I am guessing that the other patrons also had trouble finding them -- or they didn’t know that they were even there -- as I had the room mostly to myself with only a few other guests stopping by for the better part of an hour.

Set up with just an Apple MacBook Pro running Roon and connected to an AirPort Extreme router, the system used only a pair of the Duos, which were mounted on optional stands. There was no subwoofer in use. The setup was a model of simplicity and grace -- clad in a stylish matte-black finish, the Duos looked like a more rounded, futuristic version of the company’s 805 D3 loudspeakers. Very cool. 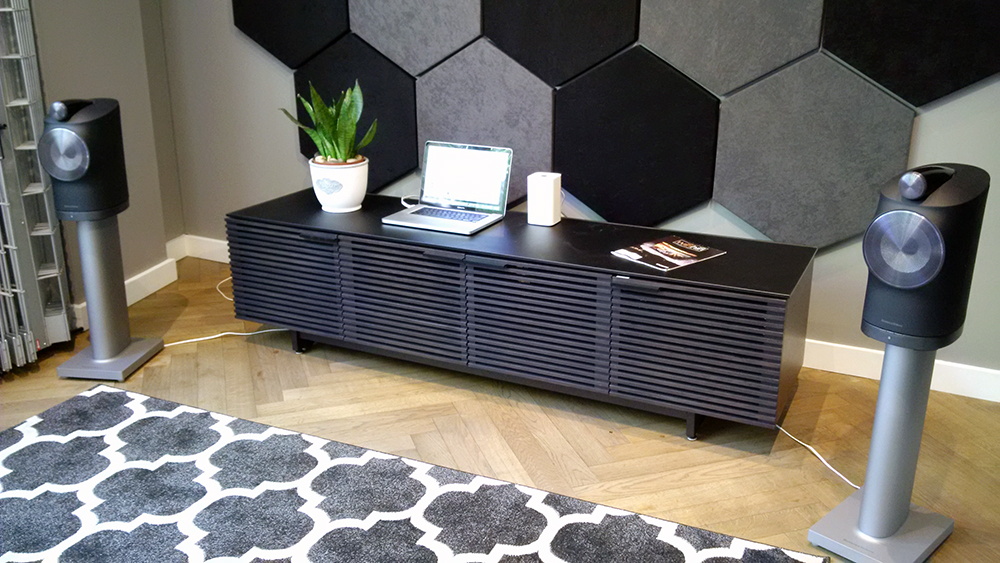 The other Formation products were also in the store: the Bass subwoofer ($999), Bar soundbar ($1199), Wedge all-in-one speaker system ($899), and Audio wireless audio hub ($699). The Formation products’ proprietary wireless technology allows streaming of up to 24-bit/96kHz audio and also includes support for Apple AirPlay 2, Bluetooth (including AptX HD), Spotify Connect, and Roon. Their wireless technology also includes a mesh networking system co-developed by EVA Automation, the parent company of Bowers & Wilkins, with a claimed latency of only 1 microsecond, which means all the speakers should stay ideally in sync, which can be a problem with some wireless technologies.

Although all of the Formation products were on active display, as I mentioned, I was really there to hear the Duos. With a 1" Carbon Dome tweeter similar to the one used in B&W’s 700 series and a 6.5" midrange-woofer with a cone made of Continuum, first seen in the company’s flagship 800 series but now in all its lines, I was very interested in hearing what Bowers & Wilkins could achieve with a high-end, wireless active speaker -- the company’s first of this kind. 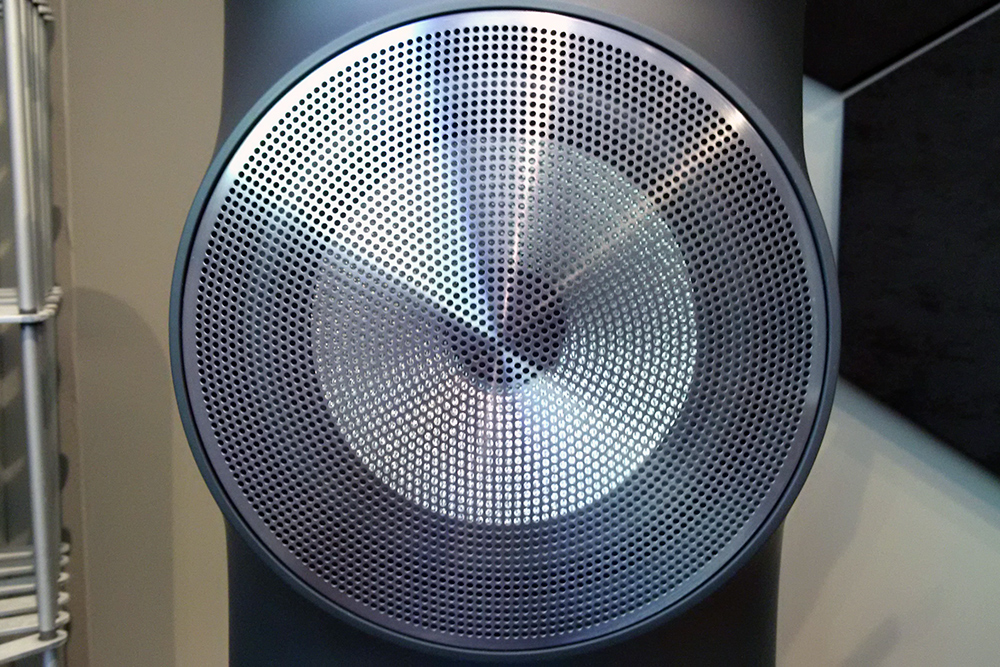 And as soon as I heard the Formation Duos, I was impressed. These little speakers simply disappeared into the huge wall of sound that was being produced. This wasn’t surprising, since I would expect nothing less from a well-engineered, standmounted active speaker utilizing digital signal processing (DSP) with two 125W amplifiers, each powering a driver. But the soundstaging and imaging were surprising. Female vocals sounded absolutely amazing. They literally “hung” between the speakers with a realism that was breathtaking. Massed voices of a choral piece had an immense sense of space. When I cued up some of my favorite recent reference tracks, Karen Carpenter’s contralto vocals on Carpenters with the Royal Philharmonic Orchestra were ultra smooth and alluring, as they should be. Dido’s breathy voice on "Hurricanes," from her latest album, Still on My Mind, was very present sounding, as was the rich strumming of the acoustic guitar, whose echoes faded eerily into a deep, dark background. 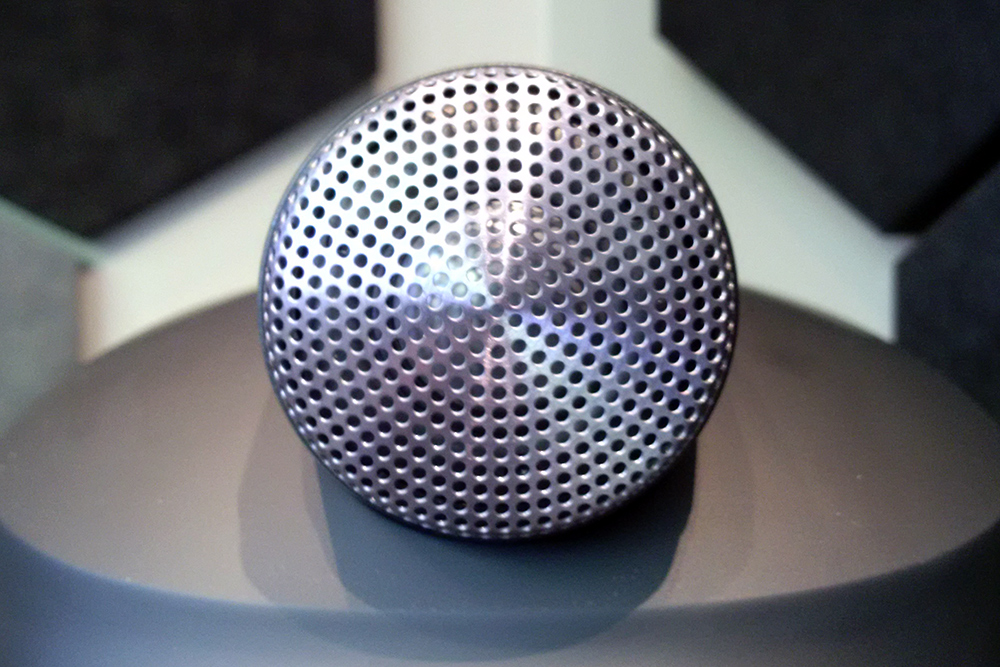 For such a compact speaker, the Formation Duo had fantastic bass, but as mentioned, this was not totally unexpected from an active speaker utilizing DSP -- the designers can use tricks to bring deep bass out that they can’t in a typical passive-type design. As a result, a track featuring pipe organ filled the room with enough low frequencies to make most people think that there might have been a subwoofer playing. Tony Levin’s bass on “Mercy Street,” from Peter Gabriel’s So, sounded big, round, and solid.

If I had one complaint, it was that the highs could be a little too crisp for my liking, which was what I heard when they played Peter Gabriel’s “Don’t Give Up,” which has Kate Bush accompanying him on vocals. Her vocals and the synthesized pipes sounded a little dry at high volumes. Still, the Formation Duos could image like gangbusters, and they projected a palpable midrange and deep, tight bass that I found utterly captivating, allowing me to overlook this one annoyance. 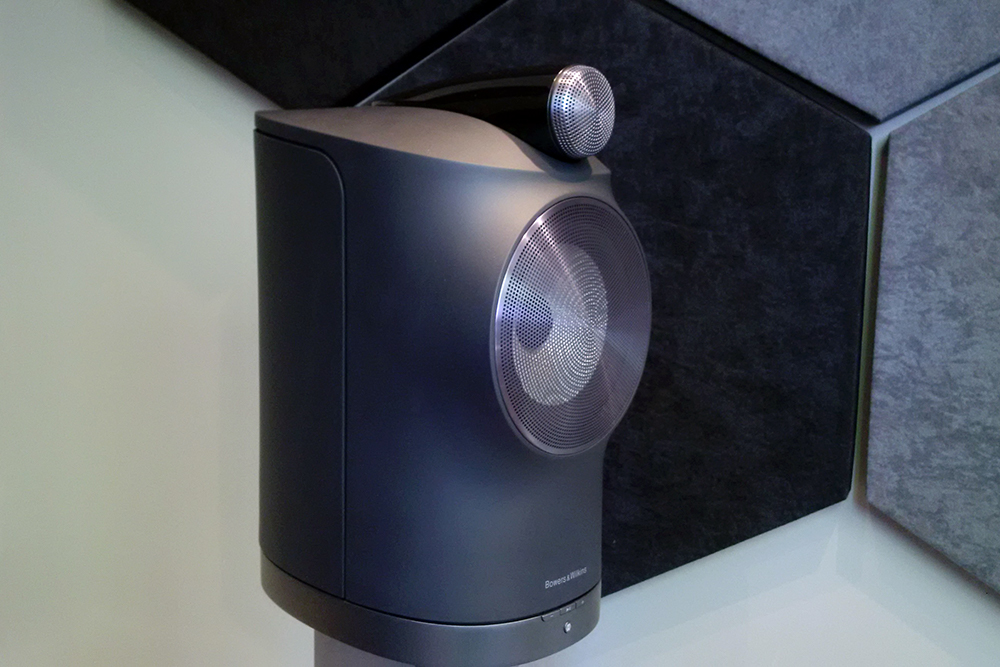 All in all, I was glad that I had made the trek down to Hi-Fi Centre to see and hear the Duos that day. What I heard thoroughly impressed me. Perhaps in the future, our own Gordon Brockhouse can do a review of the Formation Duos for our SoundStage! Simplifi website, which focuses on such products, to provide a more fulsome evaluation of their sound. In the meantime, I highly encourage you to seek out a pair of Duos to learn more about what this venerable British brand is up to.