A Day at Rogue Audio

Located in Eastern Pennsylvania, Rogue Audio has designed and manufactured quality vacuum-tube-based electronics for 20 years. In January 2018, Rogue moved from its home of 17 years to a brand new facility it had constructed from the ground up. Shortly before Christmas, I visited the new premises, bringing along my brother, Sathyan Sundaram, who also writes for the SoundStage! Network. He also took the photos for this piece. Befitting the season, we stayed nearby in Bethlehem, Pennsylvania, where there was, as it happened, room at the inn -- the Holiday Inn, that is. 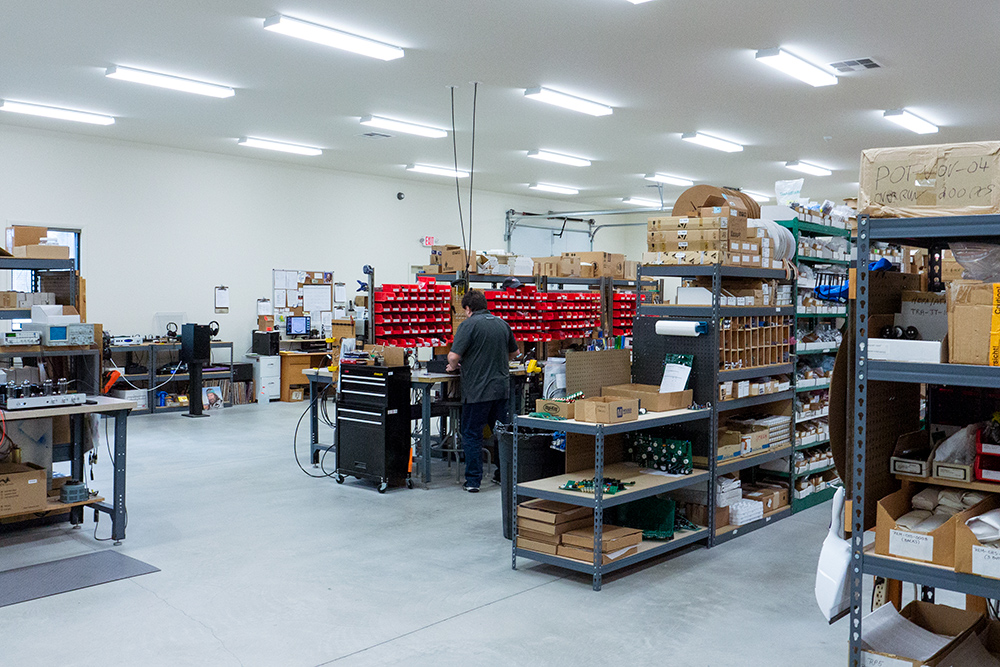 Mark O’Brien, Rogue Audio’s founder and president, and his production manager, Nick Fitzsimmons, gave us a tour, and a few themes emerged. One of them was how Rogue likes to keep the production local as much as possible. It’s not just for being able to say that the product was built in the USA, but dealing with local companies also makes operational sense. One example Nick gave was that if there were to be an issue with a run of . . . 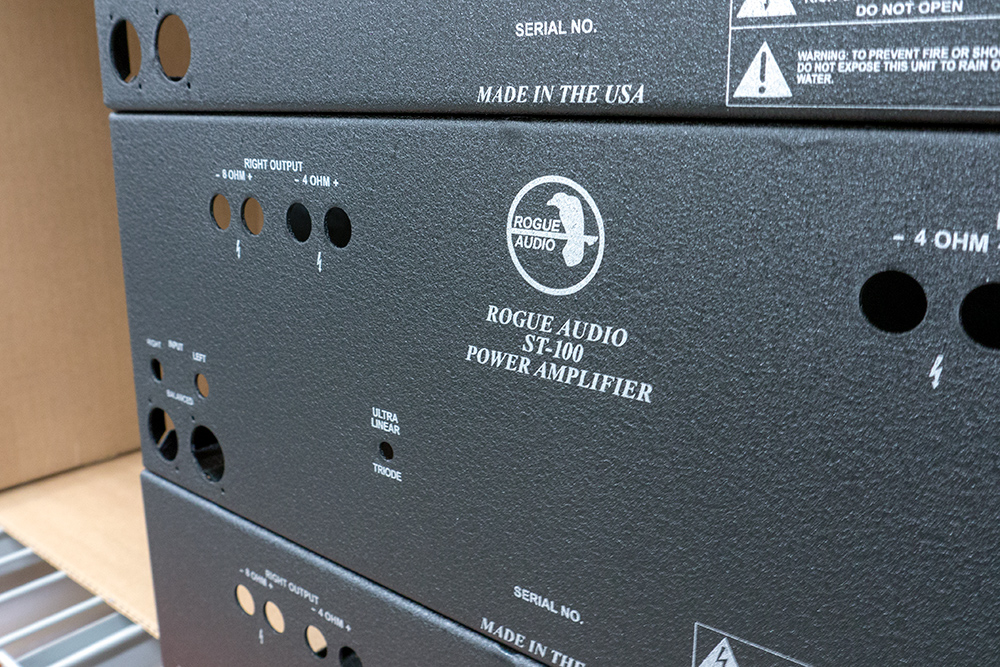 . . . chassis components, the farthest of their two metalwork suppliers is only a 40-minute drive, so they could get it resolved in person and not wait months on a shipment from elsewhere. Likewise, their transformers, a critical device in any tube amplifier, mostly come from suppliers in New York and Connecticut. 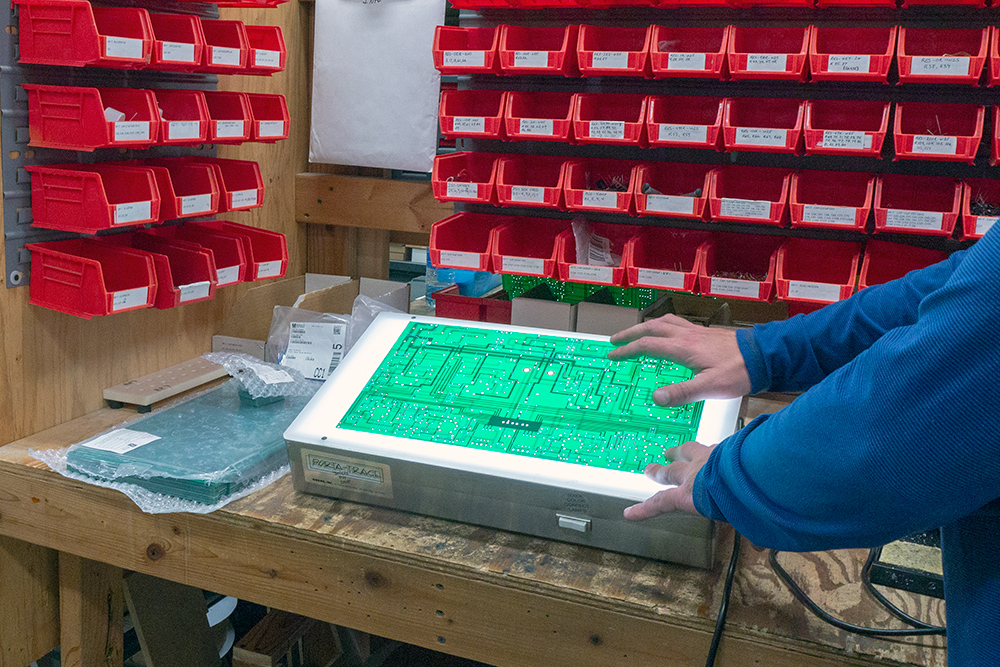 The second theme to emerge was quality control. Every unit Rogue builds goes through multiple QC inspections, which begin with looking at each printed circuit board on a lightbox to identify any broken traces or other imperfections, even before the first component is soldered on. This step not only avoids rework and wasted components in the assembly process, but could catch problems that would otherwise come up when the unit is out in the field in a customer’s home. 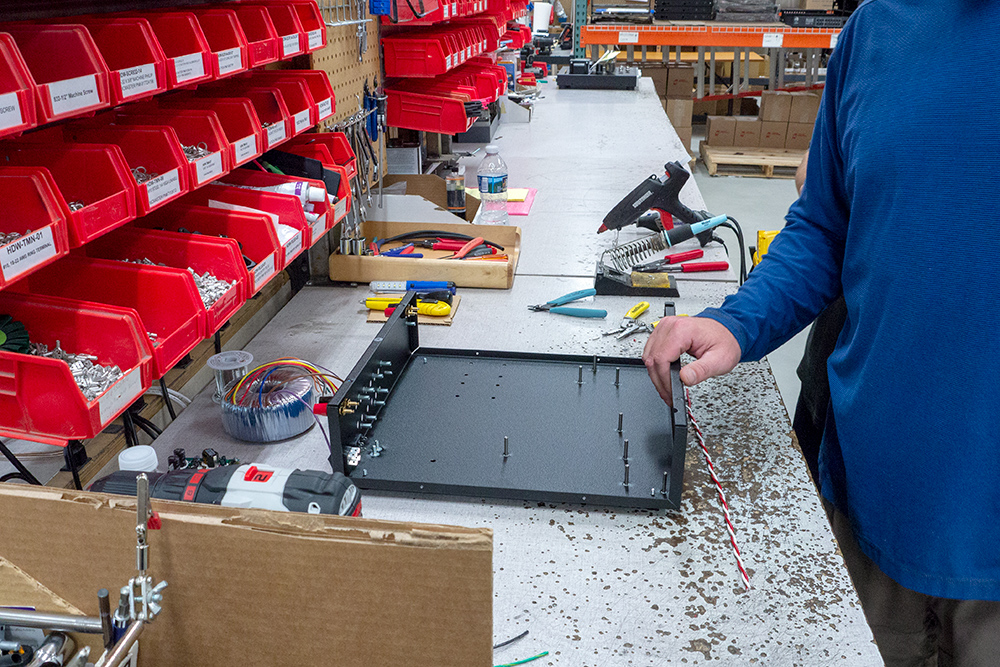 Once the printed circuit board (PCB) is populated, it needs to be . . . 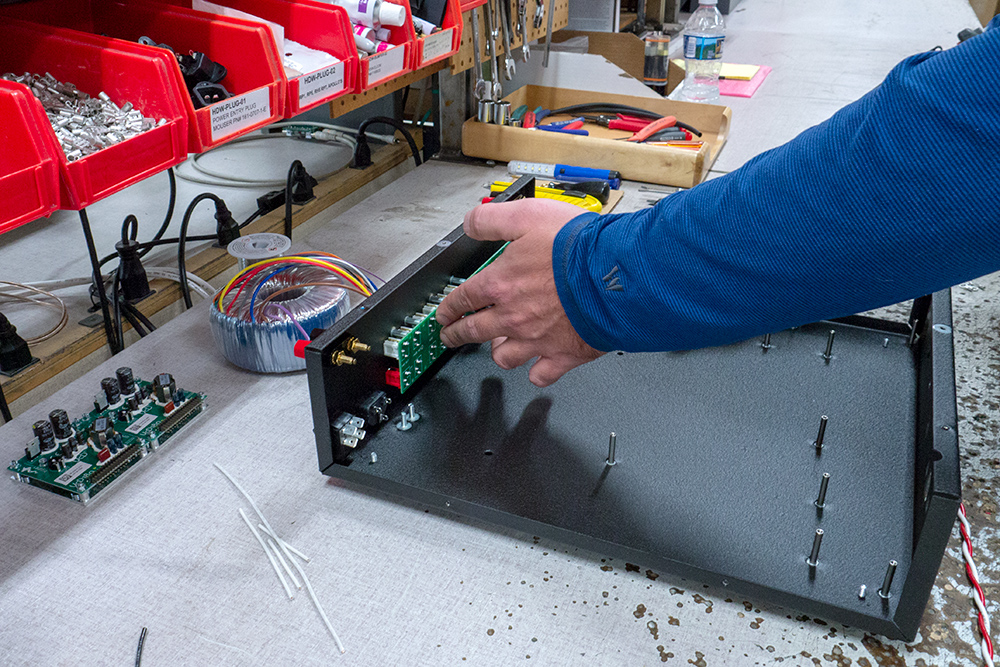 . . . assembled into the chassis along with the transformers, knobs, switches, and displays. Then . . . 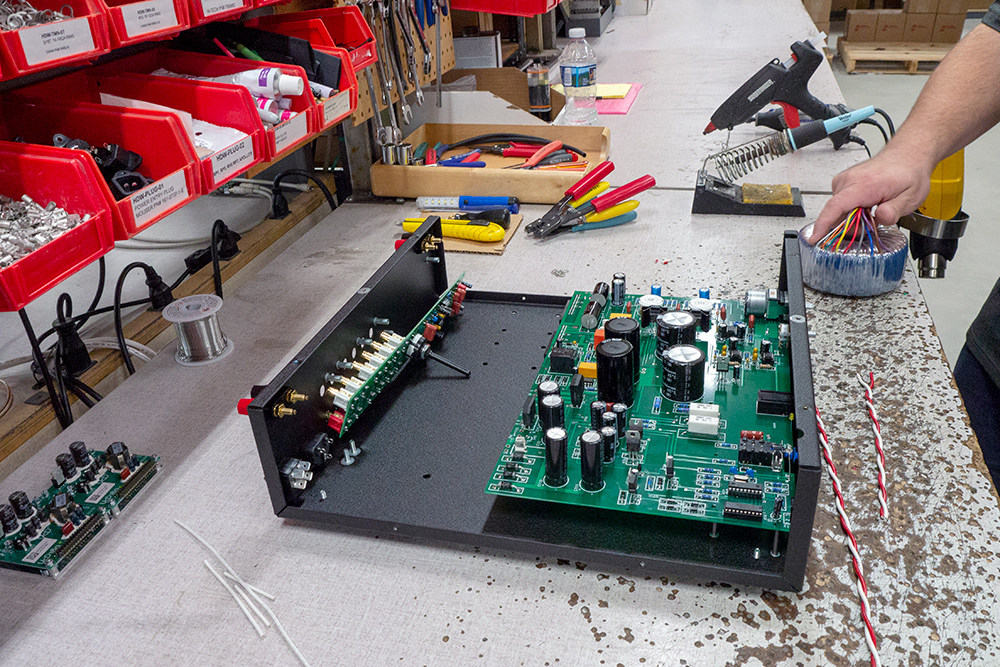 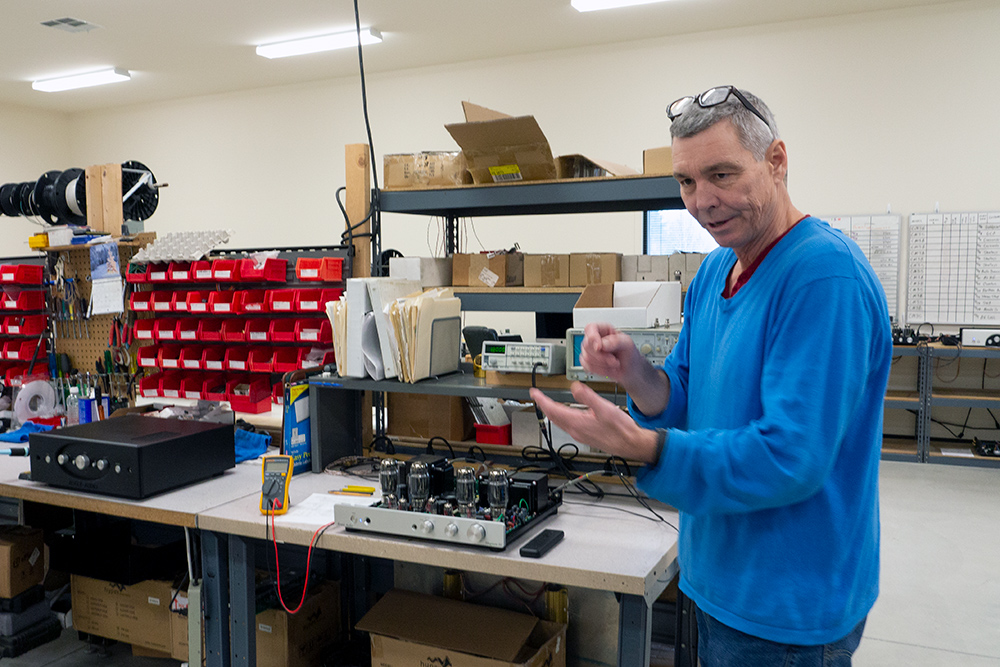 Before the top of a component goes on, every unit has its tubes installed and gets run in for 24 hours. This burn-in step isn’t for any potential improvement in sound quality, but to identify any points of premature failure. A technician will check through a list of test points on the circuit board to ensure that all values are within specification.

Lastly, before a component can go into its shipping box, it needs to go through a listening test. A pair of Klipsch speakers are used -- not for their superior sound quality, but because their high sensitivity will make it easy to hear any noise in the system that shouldn’t be there. For example, hiss or hum that might be present with an 85dB-sensitive speaker will be twice as easy to hear if the speaker’s sensitivity is 95dB. His physics and electrical engineering backgrounds notwithstanding, Mark O’Brien thinks there are some problems that are just easier to catch with a simple listening test than with an oscilloscope. Someone will listen to every input, flip every switch, and push every button to ensure it functions properly. If there is a headphone output, that will get listened to as well. 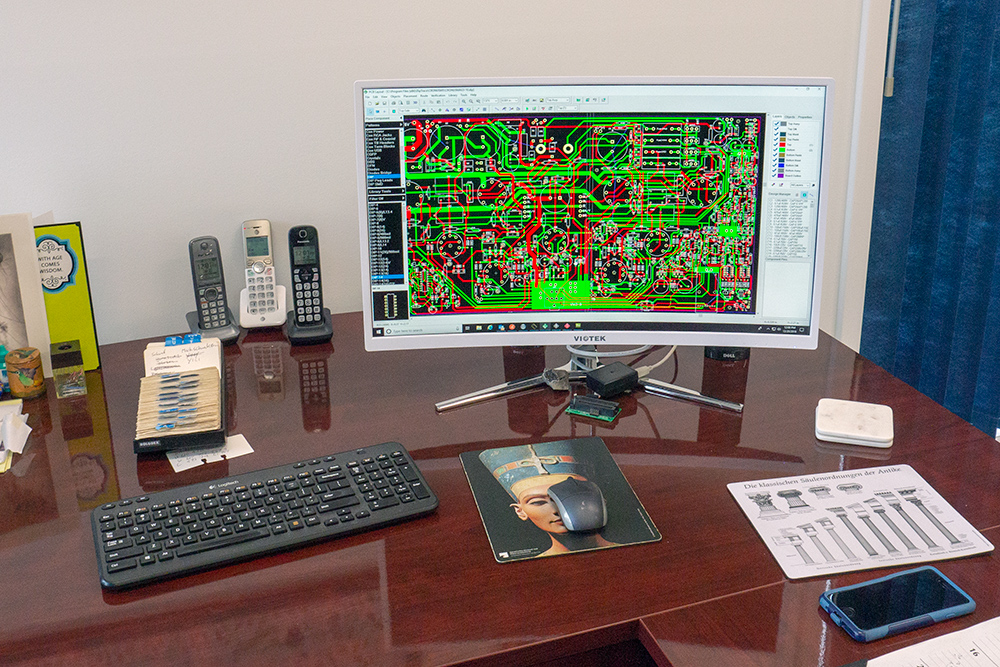 Mark O’Brien does the electrical design for Rogue Audio, and shares the mechanical and industrial design responsibilities with the company’s vice president, Phil Koch. After having worked on these tube circuits for a few decades, Mark said he usually has the idea for something new mostly laid out in his head, but he appreciates the ease of using modern software to draw up the circuit, as well as to do some simulated measurements, before having to build up the first prototype. 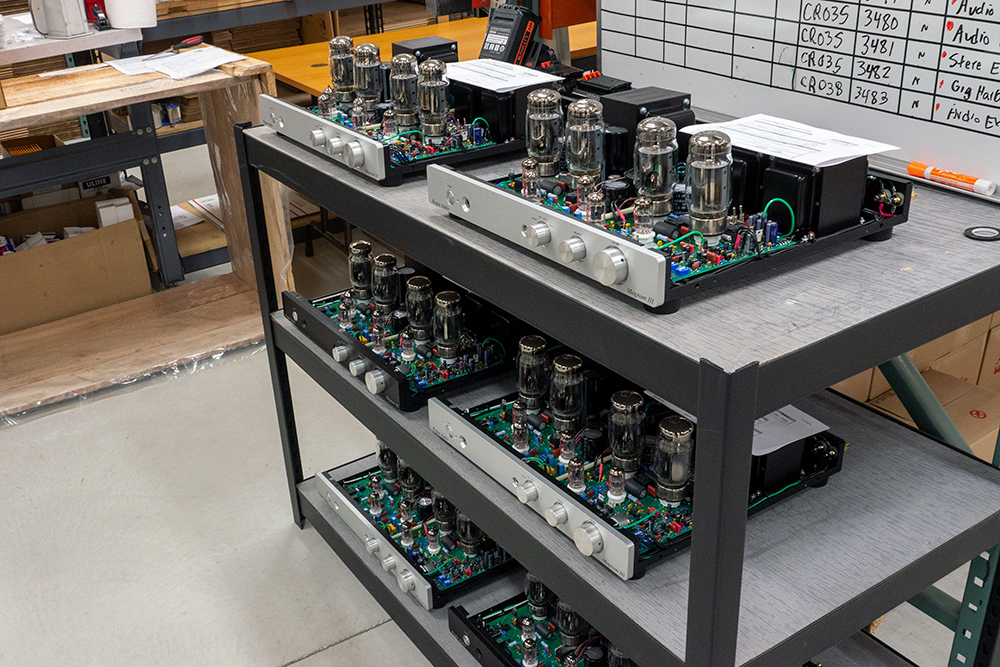 In the end though, for Mark, and for Rogue Audio’s customers, a new product succeeds or fails based on whether or not it sounds good. So we ended our factory tour in the listening room, where we heard Rogue’s Stereo 100 power amplifier driving a pair of MartinLogan Expression ESL 13A loudspeakers. The preamplifier was Rogue’s RP-7. The digital front-end was a MacBook Pro running JRiver and feeding into a Mytek Brooklyn DAC. Analog duties were handled by an Avid turntable with a Miyajima Shilabe cartridge fed into a Rogue Ares Magnum phono preamp. 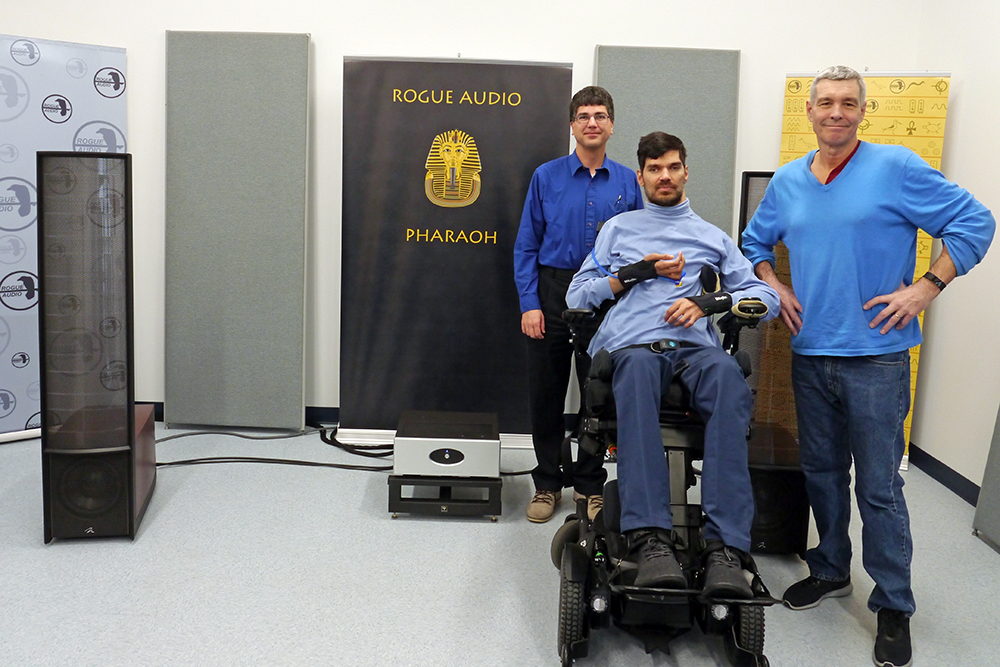 Our listening time was, unfortunately, a bit short, as we needed to hit the road, but it was informative and particularly valuable to me because I now have some Rogue Audio components in for review -- I will be reporting on them in the next several months, beginning with the RH-5 headphone amplifier on SoundStage! Solo. 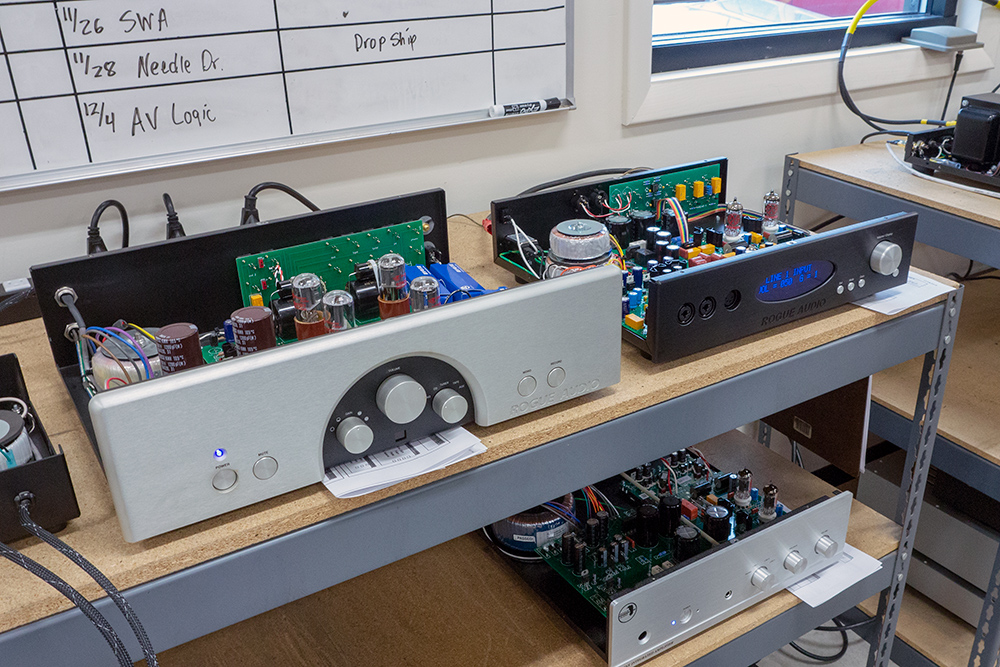 The final theme of our visit was value. Mark O’Brien’s philosophy has always been to make audio components that perform well, while eschewing the super-exotic materials, jeweled casework, and exclusivity pricing that drives a large slice of the audio industry. In our conversation, Mark told us that, while the 2008 recession had been quite difficult for Rogue, as it was for many firms, it may ultimately have helped the company! Why? As a larger number of consumers consider what they are really getting for their money, when they go to make a purchase, it can only benefit those companies who have built a reputation on good-sounding, long-lasting products sold at a fair price. Rogue Audio is, most assuredly, one of those companies.