The story of Audeze’s CRBN electrostatic headphones, which the company announced today, is unusual. And judging from the brief listen I got last week at Audeze’s Santa Ana, California, headquarters, so is the end result.

The CRBN grew out of Audeze’s work with UCLA’s Staglin IMHRO Center for Cognitive Neuroscience and industrial design firm Boombang, attempting to create high-quality, noise-canceling headphones that patients in MRI (magnetic resonance imaging) machines could use. The headphones couldn’t have any metal parts, because they would interfere with the machines and possibly burn patients because of electrical voltage induced by the powerful magnetic fields.

Currently, MRI operators use a crude system of plastic hearing protectors that receive sound (instructions from the technician, plus music to keep the patient entertained and relaxed) through long tubes connected to a speaker box—and the sound is at best usable. “Well, you’re not gonna like this!” an MRI technician warned last December when we were chatting before the procedure and I told him I review audio products for a living. 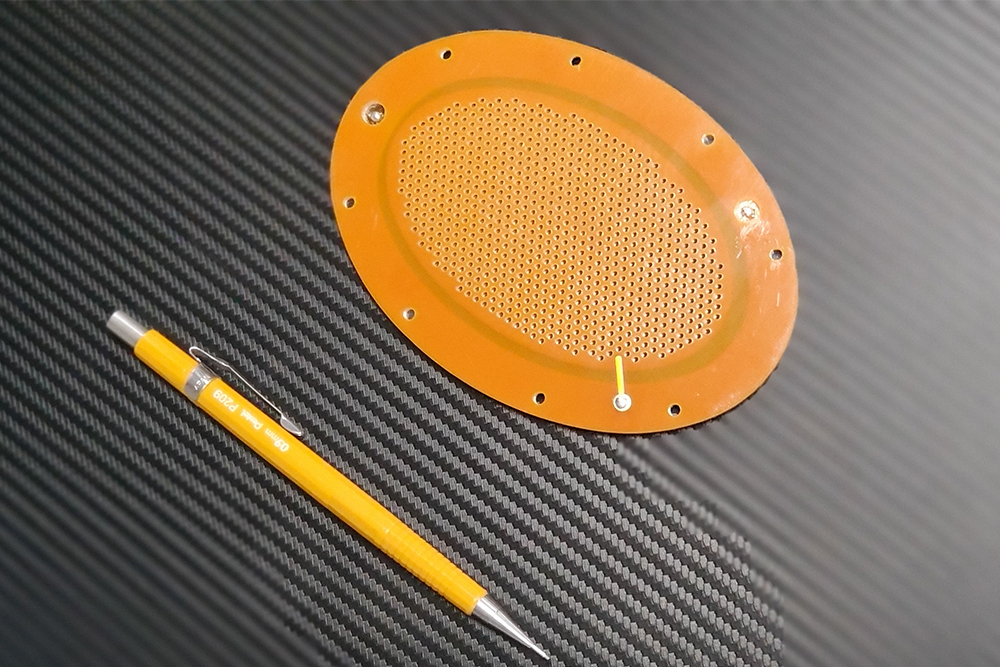 Audeze was asked to develop high-output headphone drivers containing no metal. The solution it found is an electrostatic driver using a film diaphragm impregnated with a single layer of conductive carbon nanotubes. According to Audeze founder and CEO Sankar Thiagasamudram, the company was already using cast (i.e., poured into a mold) polymer film diaphragms for its planar-magnetic headphones because the process delivers a more consistent thickness than extruding the film. The company found that its casting process allowed it to suspend a single layer of nanotubes in the polymer. Thiagasamudram says the 3-micron-thick, carbon-impregnated polymer film can’t delaminate, whereas a polymer diaphragm with a vacuum-deposited metal conductive layer can.

One particular challenge was that noise levels in an MRI machine can reach 120dB, which means a headphone with active noise canceling needs to create a phase-inverted canceling wave that’s also at 120dB. So the driver in the MRI headphones is designed to take as much as 1200V bias, rather than the 580V bias used in most electrostatic headphones, allowing it to produce the super-high sound-pressure level required. 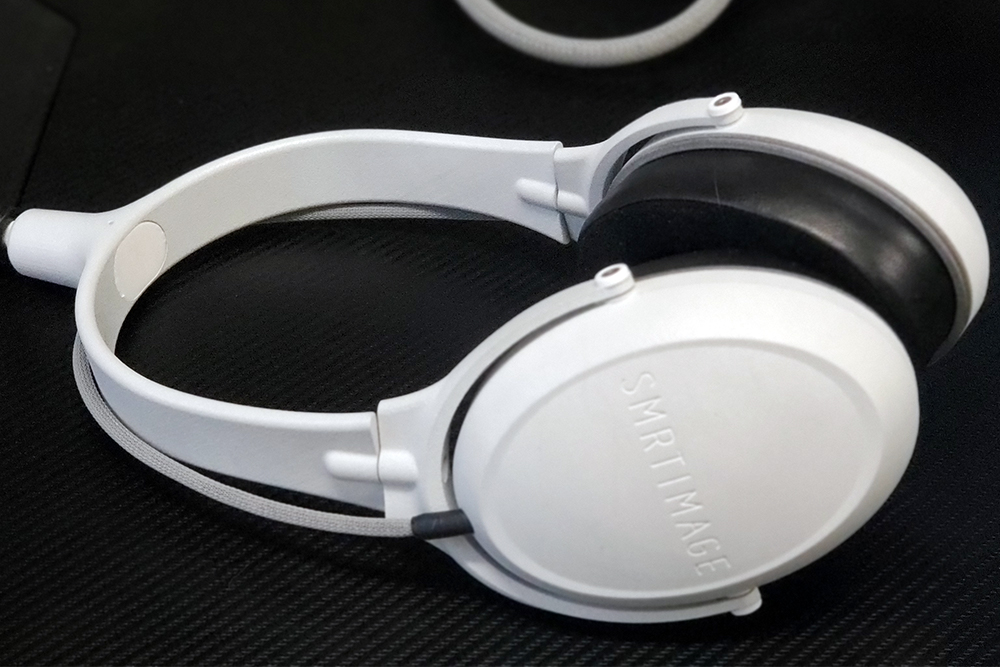 The MRI headphones are starting to ship out to medical providers now, and Audeze has also developed a new high-end headphone model, the CRBN, around the driver. “We never wanted to get into the electrostatic market, because it’s a niche inside a niche, but when we heard how good this driver sounded, we couldn’t resist,” Audeze’s Mark Cohen said. The $4500 CRBN headphones are now available for order on Audeze’s website. They require the use of an amp that can drive electrostatic headphones; according to the company, any amp conforming to the 580V Stax standard will work.

Audeze demoed the CRBN headphones for me using a Mjölnir Audio Carbon amplifier, playing my choice of tunes from Qobuz. I’ve heard several electrostatic headphones before, and measured a few, but I’ve never felt the category offered anything I couldn’t get with planar-magnetic headphones, which don’t require the use of a special amp. 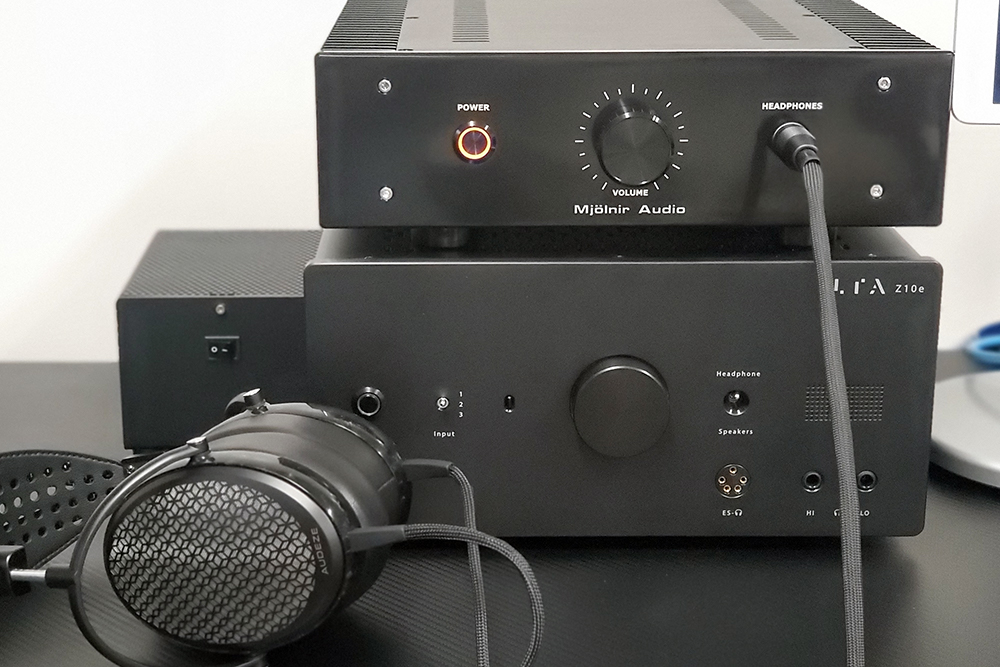 I didn’t feel that way hearing the CRBNs. They seemed to deliver a realistic sense of space I’d never encountered before, in speakers or headphones. When I played the version of “Gentle Rain” on saxophonist Houston Person and bassist Ron Carter’s Remember Love (24-bit/48kHz FLAC, HighNote/Qobuz), I was struck by how much it sounded like Carter was playing about five feet to my right. I could sense the space around the bass, and even sort of “sonar” the size of the bass’s body. It was all the more remarkable because of the contrast with Person’s tenor, which was mixed with lots of reverb and thus kind of floating around me. Of course, the recording was made with microphones, so I could hear the coloration of the bass mike and whatever EQ was used in the mix, but from a spatial standpoint, it sounded like I was hearing a live bass in a relatively small room. It reminded me of monitoring a bass recording with headphones on one ear to hear the recording chain but removed from the other ear to reveal the live sound—except I was hearing the same sound in both ears.

Even with Tracy Chapman’s “Fast Car” (Tracy Chapman, 16/44.1 FLAC, Elektra/Qobuz), a time-tested standby, I heard a sonic presentation I’d never experienced before: truly lifelike detail on the acoustic guitars at the beginning of the tune, and a generally airy and natural-sounding sense of spaciousness throughout—and this on a recording that’s generally used as a tonal-balance test rather than a test of soundstaging and spatiality. 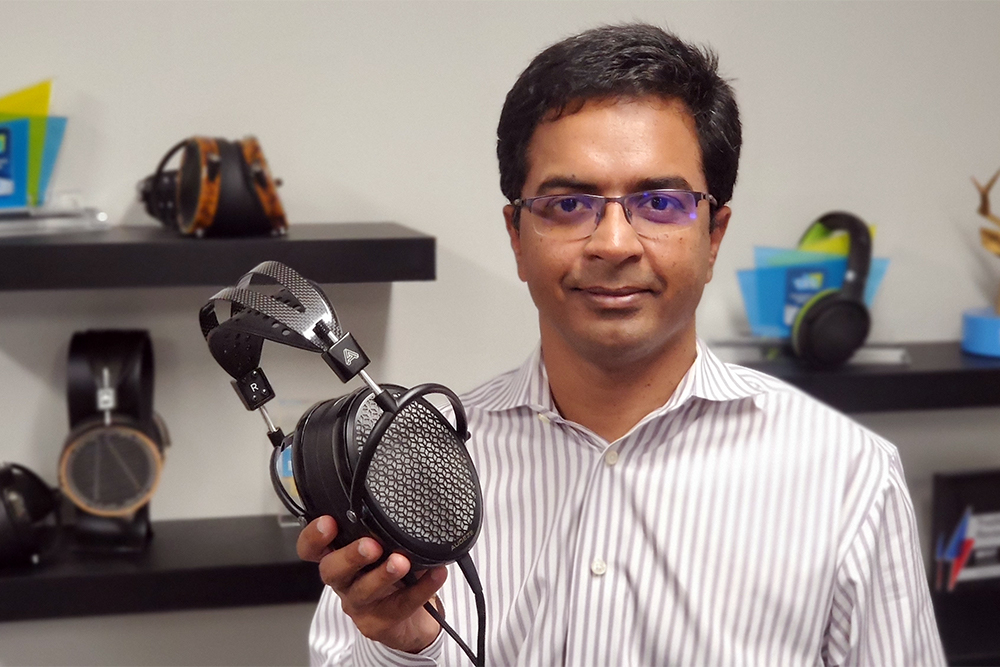 Sankar Thiagasamudram with the CRBN headphones

I’ll be very curious to hear if my initial impressions hold up under more focused testing—and to see if the measurements look like standard fare for flat-panel-driver headphones, or if there’s something really new and different from a frequency-response standpoint, too. Fortunately, Audeze has promised to send a review sample as soon as they’re available.