On the morning I submitted my previous (first) column, I stepped outside to my backyard workshop shed and unfastened the wood clamps from a fun little project I had no intention of keeping.

The Fostex BK-12m is a 2m folded-horn speaker that uses any number of small, full-range drivers. Online retailer Madisound sells the DIY kit for $395 (all prices USD) and the cabinets alone for $130 each, but due to the rising cost of materials, it had paused selling both. On the product page, however, I found a link to a free PDF of the cabinet plans.

I just happened to have a pair of 4″ Fostex FE103En drivers (now superseded by FE103NV, $64 each) that I sourced from a small bedroom/desktop kit ($279) that I had years ago purchased for my son’s first bedroom setup. Since he’d graduated to other larger, vintage speakers, the mini speakers had sat unused.

Having been commanded by the missus not to use paycheck money on the hobby necessitates a healthy dose of buying (and fixing) and selling used gear on the local marketplaces, which means that anything of worth and unused and taking up space is a potential sale to fund finishing or starting another project. Since I didn’t think the Fostex speakers would fetch much, and since I also hate losing money, I decided to spend money. To make money. Hey, sometimes it works out! 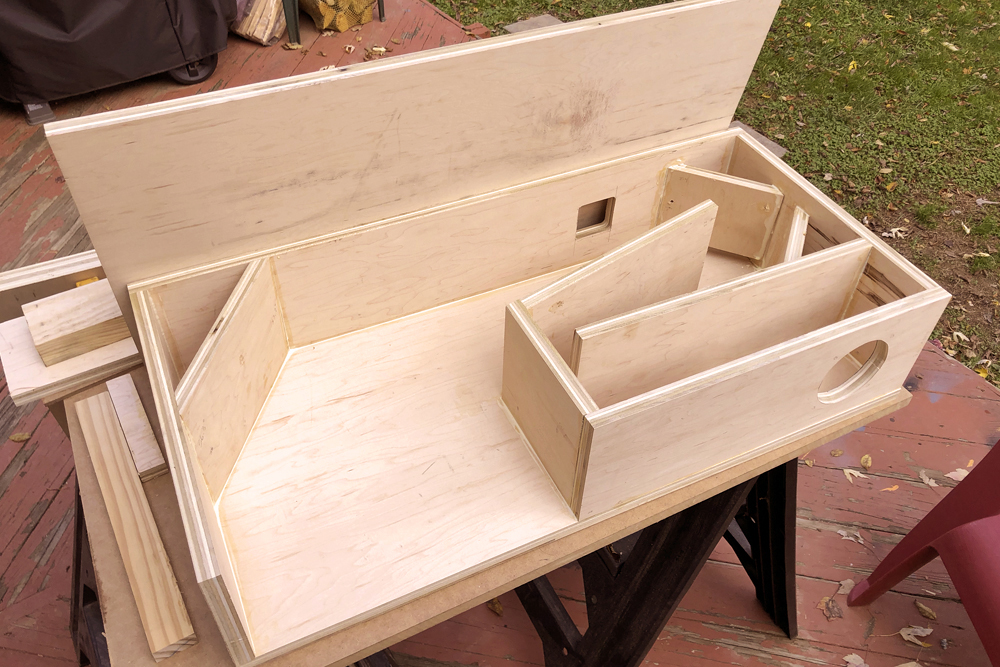 Surely these larger, floorstanding cabinets would be more . . . marketable?

I made my BK-12m cabinets from a single 75-pound sheet of 3/4″ maple ply at 4′ × 8′ ($66). Following the meager layout instructions listed in the plan, I drew out and labeled the cuts with the board’s long grain. I used a portable table saw to make the rip cuts and then created a jig to make the crosscuts. After cutting, I stacked the pieces into two piles, one per cabinet. My visiting father-in-law routed the holes for the rear panel’s hookup-wire terminal cups and the front baffle’s driver. Then we got to gluing and clamping. 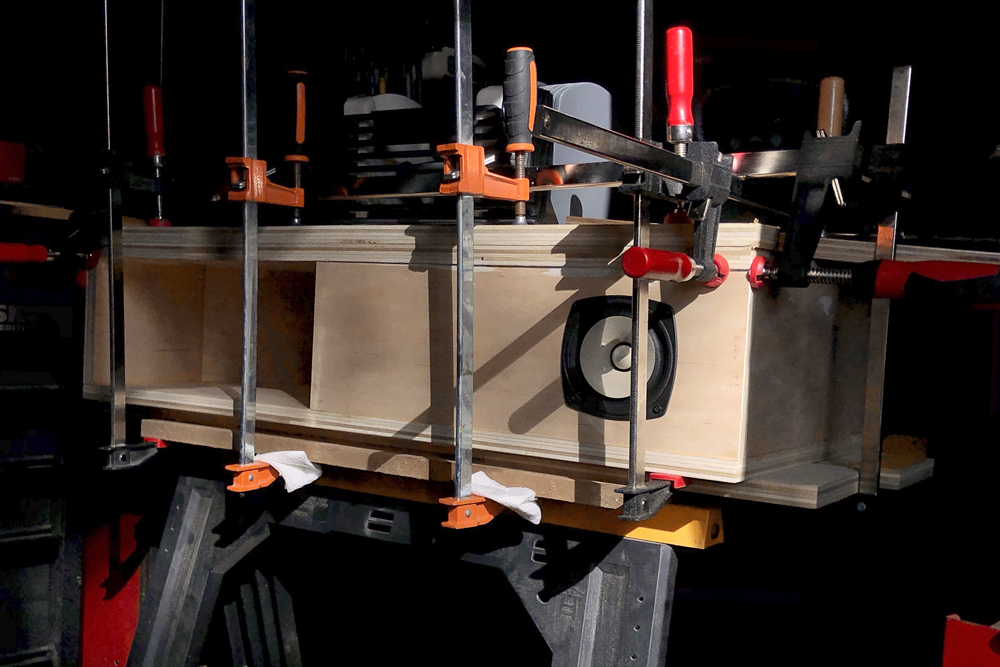 Something strange happened when I brought the completed but unfinished cabinets into the audio room. I hooked them up to my DIYAudio.com First Watt Aleph J clone amp, and I listened to them. Well, that part wasn’t strange, but what came next left me positively flummoxed.

Years ago, at a well-known car magazine, I worked for an editor who desired “every car to be great” and was disappointed when they weren’t. It was a clever acknowledgment, I believe, that most new cars were great—for their specific purpose. No vehicle better illustrates this concept than the Toyota Prius—to the chagrin of anyone who actually enjoys driving. The Prius is ugly and slow, rides like a donkey on pogo sticks, and completely mops the road of anything approaching its miserly fuel sippyness.

Prius owners lovingly hypermile them into the ground.

If you’re not seeing the line I’m drawing in the sand of this little digression, it’s this: I wonder if the audiophile community isn’t much different. 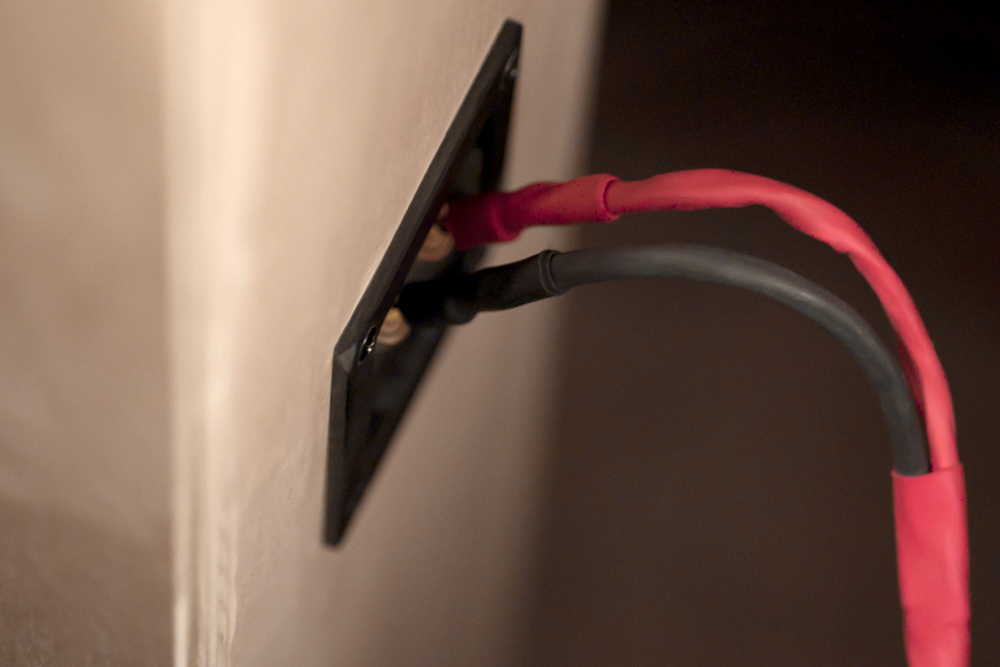 I expect that someone shopping for an integrated tube amp has different priorities and expectations than the one shopping for megabucks, freight-delivered, solid-state separates. And not just from a financial perspective. Likewise, today’s streaming-DAC-plus-phono-integrated amps aren’t much different, for an intended purpose, from those vinyl-walnut-veneered, department-store-branded, all-in-one-chassis units sold in the late 1970s.

Each of these audio products serves a given purpose. Some of them are hi-fi; some of them pretend to be. The question isn’t whether or not you like them. It’s whether or not the product achieves its intended design: does it do well the things it promises to do? Only later does the secondary question emerge: does that function, that intended design, suit your own audio priorities and expectations? 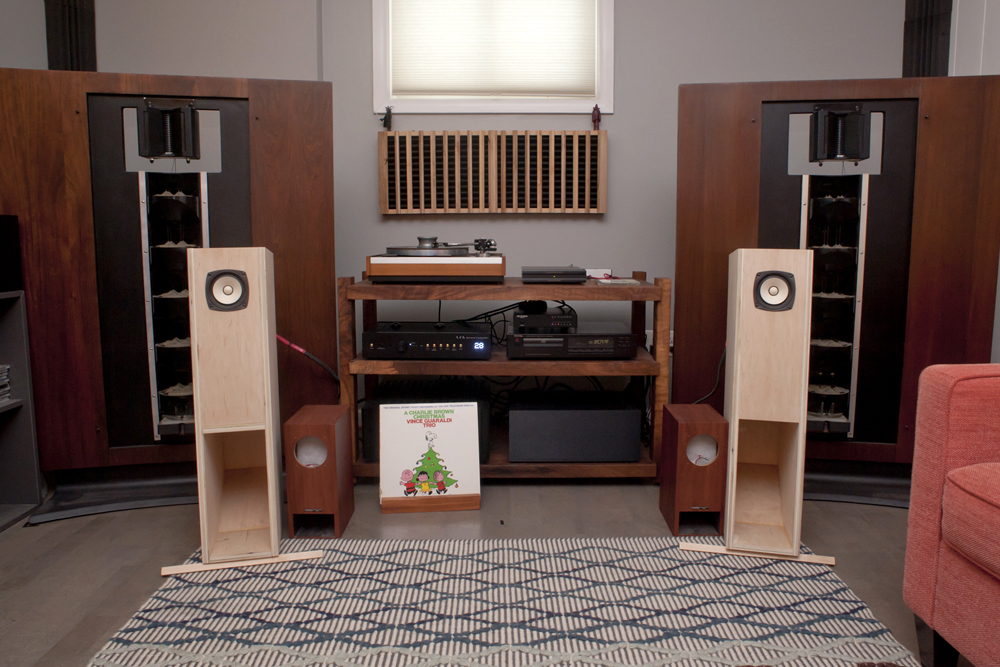 My listening room is a medium-smallish box of parallel lines, with the playback gear sitting atop a Massif Audio Design Dogma rack placed near the short front wall, between speaker baffles that stand slightly toed-in at 36″ from the front wall. A sleeper couch lines the right wall, and my collection of Ikea Eket media-storage cubes line the left wall. The rear wall, adjacent to both the front door and a wood stairwell, is made of shiny, painted brick; opposite the front door and to the rear right of my listening seat, the stairwell is tent-flapped by a hanging quilt that—if only aesthetically, but hopefully sonically—encloses the room’s only (open) cavity. I usually sit between eight and ten feet from the speakers.

Fostex lists the FE103En driver as having a stamped-steel frame, a banana-pulp paper cone, and an inverted cloth surround; it has a power rating of 5-15W and a nominal impedance of 8 ohms. The diminutive driver is capable of 89dB/W/M output and a frequency response of 83Hz to 22kHz. In cabinet, the BK-12m extends down to a rolled-off 70Hz. At my listening chair, and with a 38Hz room mode, I clearly heard 1/2-octave warble tones down to 40Hz, with 31.5Hz faintly observed at the horn’s front-facing throat. Though rather diminished in volume, 16kHz was also audible at the listening position.

In my listening, I found that the BK-12m loudspeakers could make an impressive noise, but on some of my favorite music, the scale was smaller, thinner than I’m used to. They could play loud, and with flesh and bite that latch onto the music’s finer details. Fast, explosive, linear—depending on the recording. And while most music doesn’t need to play loud, or to fill a room, I found that these 4″ crossover-less budget drivers provided a sense of instrument and vocal isolation that wowed me. 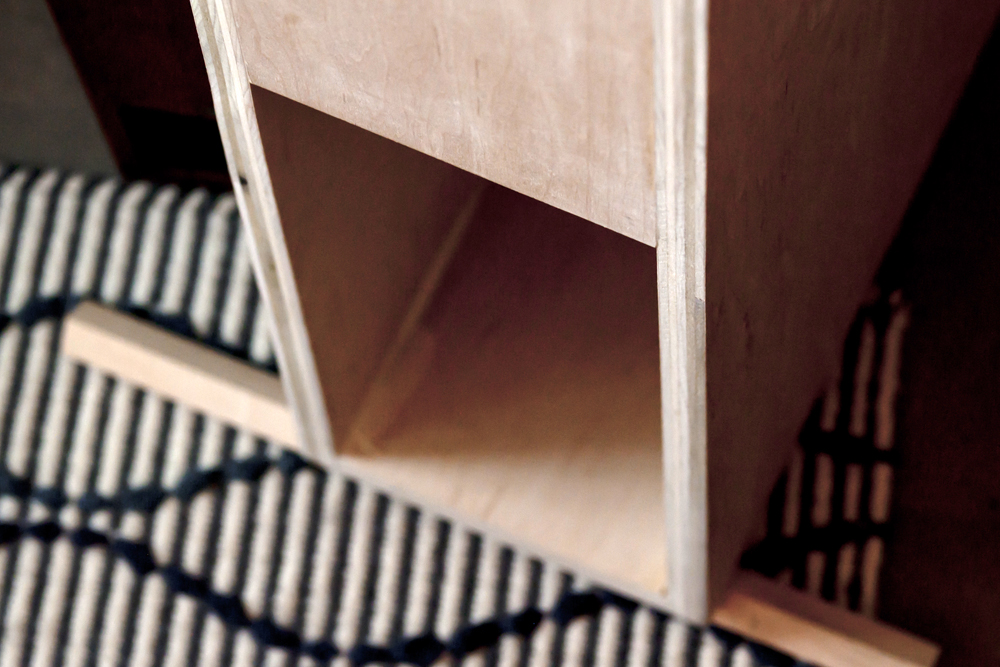 Three changes took the DIY BK-12m speakers to another level: lifting the front baffle off the ground so that the drivers were aimed toward my ears, sitting in the near field, and adding a budget subwoofer—crossed over at 70Hz—to supplement the lowest octaves. This presented a fuller experience without altering the speed, touch, and midrange presence I had previously found so alluring. Here, it filled the room.

I began this project with the preconceived idea that a small, full-range driver in a tiny box wasn’t for me. I just knew I wouldn’t like them and so set about making them sellable. Ignorant of their capabilities, I didn’t think crafting a larger box for them would change my listening mind.

The potential (or probability) for discovery and the emotions that come with it, in the driver’s seat, is literally why car dealerships encourage you to test drive a vehicle. Test driving the DIY Fostex BK-12m introduced me to the idea that these small speakers do some of the things I want from a speaker better than my other large boxes. 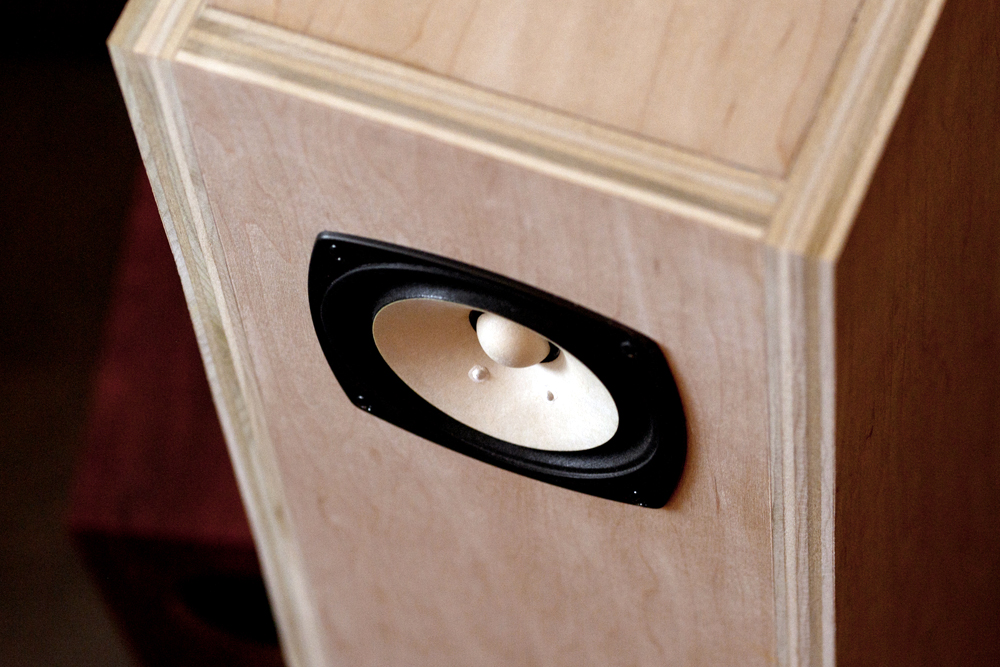 For the price of lumber and a family dinner—and a few days’ labor (that I thoroughly enjoyed)—I found speaker performance that has rivaled or exceeded transducers costing ten times as much.

Now the question is whether or not I want to sell them.