Sometime after the last Leo’s Stereo closed, my father would take me to The Wherehouse on Saturday mornings to shop for CDs. When that chain of stores folded, he moved on to Target or Best Buy or Sam Goody at the local shopping mall. That one could own music, a tangible thing for personal enjoyment, shaped my upbringing. What we didn’t know then was that store shopping—seeing the newest displays, rifling through plastic letter dividers and name placards—was an endangered endeavor.

“You know what?” I asked my friends. “Hey. Actually, if you’re interested, I could sign you up. It’s totally not a scam. You just pick 12, and then buy one more at regular price sometime in the next year. That’s it.” 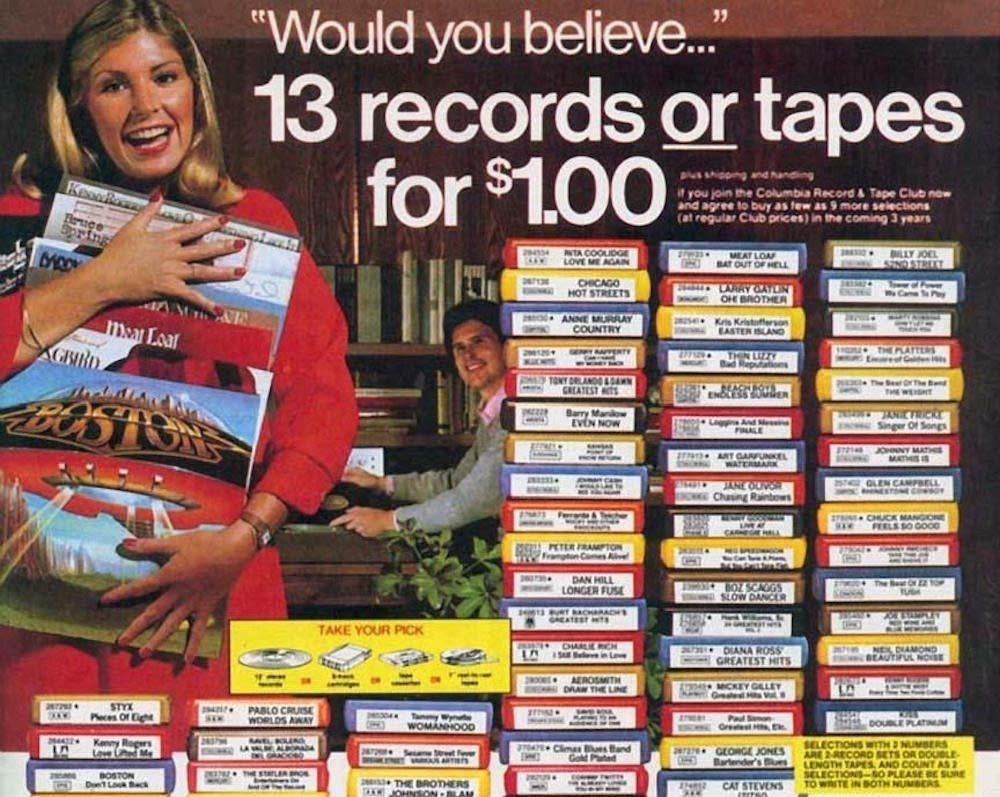 After I ditched Columbia House for BMG Music Service, my burgeoning collection grew rapidly. The pricing was better, the genre selections were more diverse, and the album descriptions appeared to have been written by people who cared about each band’s music. There was one other thing, though: four free CDs no-strings-attached for referrals.

You might be thinking I had a lot of brothers. I recall my mother wondering the same.* But while I was Scrooge McDucking backstrokes in a chamber of my own shiny silver discs, access to tangible music was on the way out. You probably know the rest, and how we got to today’s resurgence of both vinyl and high-quality, lossless digital streaming. But my love for the CD format hasn’t waned.

Last month’s blog post introduced the first of two little boxes that I placed into my system’s signal path. Box #1 (analog) had so thoroughly elevated the sound of vinyl in my listening room that none of my streaming or shiny discs could keep up. Box #2 (digital) doesn’t even the score (it doesn’t need to); rather, it breathes new life into a relic of the past.

Box #2 is a digital, multipurpose tool. It’s a key, or an unlocking spell, that opens various audio possibilities.

The $105 miniDSP 2x4 is a “digital signal processor.” The product page says it’s got engines and resolutions and programmed processing filters and plug-ins; I use it as an active, electronic crossover. In that manner, I’m like a tuner using an automotive dynamometer, or “dyno,” a tool that measures a car engine’s output. Dyno tuners tweak an engine’s parameters and then test the changes to enhance its output. I’m using the miniDSP to safely tune my incomplete ESS Transar speakers. 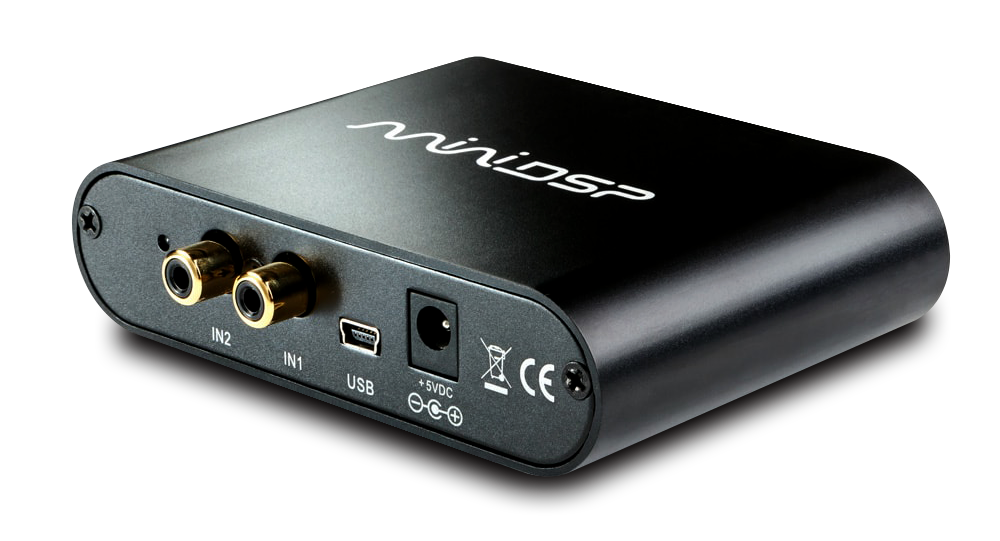 The full journey is on Audiokarma, but here’s why I’m writing about using a miniDSP: Ricky Caudillo, the longtime and now-former CEO of ESS, messaged me in 2016, alerting me to an eBay auction for a pair of Transar speakers located in Ohio. I won the auction. The missus totally didn’t flip, not even, like, a little, and so we road-tripped to Ohio (from the Washington D.C. metro area) to pick them up. The Transar is large, wide, thin, two-person-carry heavy, flimsy and wobbly, and open-baffle (dipole, too). I found the pair untested, incomplete, and battered. They didn’t have the Heil Air Motion Transformer tweeters or the suspended mounting brackets, but both of the vertical “low-frequency AMT” drivers’ five pods moved freely, vertically, on their graphene rods atop each voice-coil’s large magnet. Score.

I had no idea if they worked. I had only a vague idea of what was missing. Worse, there was almost no information aside from ancient hearsay anecdote on the internet’s earliest message boards. 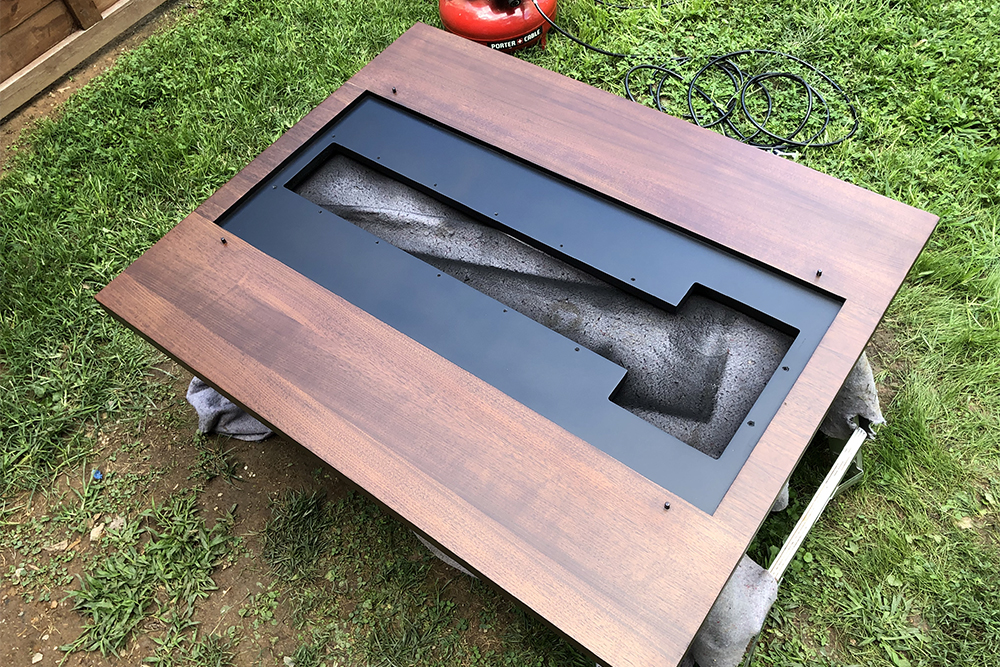 In time, I bought brand new AMT tweeters from ESS, and my father-in-law fabricated aluminum mounts to secure the two drivers to each speaker’s baffle. I was stuck, however, when I discovered that the original speaker package included a special current-source amplifier/crossover box. The Transar is a biamp system, and the amplifier box contains a built-in passive crossover. The built-in amp is said to power the low-frequency driver in each speaker, and the user then connects another amplifier to the amp/crossover box’s single-ended outputs to power both AMT tweeters. All of that, and the special five-pin XLR connecting cables, was gone. 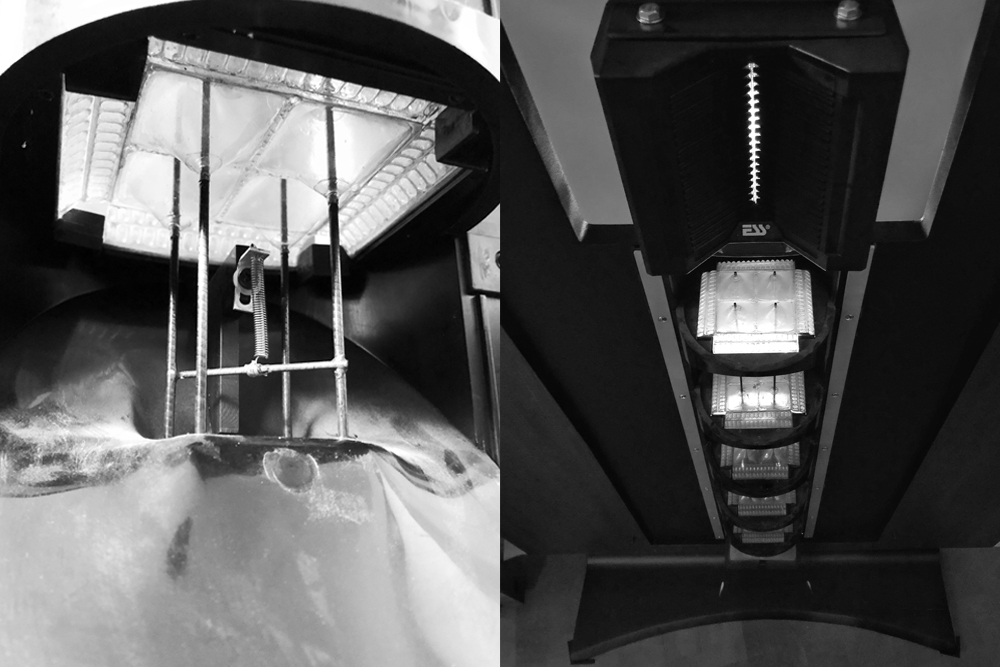 After two years of searching, I gave up on the amp/crossover box and decided to direct-wire the drivers. I made two small wooden boxes—each box contains four binding posts for the biamp speaker cable connections. This means that each speaker’s tweeter’s two leads run to two of the binding posts, and the leads from each speaker’s low-frequency driver run to the other two binding posts. Absent a passive crossover, the very digital miniDSP sits in the signal path, via unbalanced, single-ended connections, between my two amplifiers (one for the low-frequency AMTs and one for the Heil AMT tweeters) and my Linear Tube Audio microZOTL preamp. 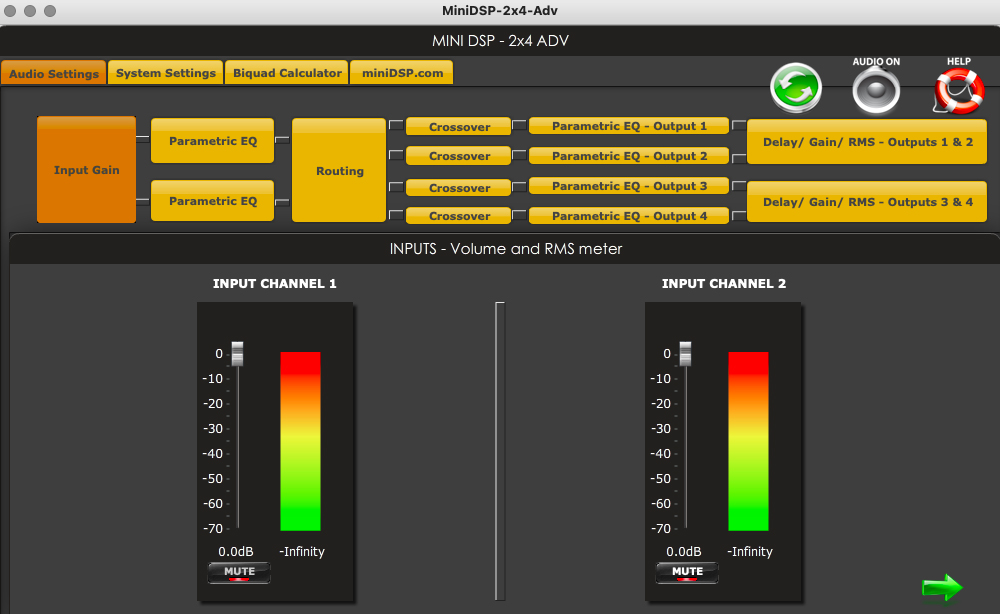 The beauty of the miniDSP’s software is its real-time processing of extensive crossover and equalization adjustments. Each hardware purchase comes with one software license, and it’s the app’s plug-ins that enable those infinite adjustments. You can literally choose new parameters on the fly to earball driver and system preferences, like crossover types, slopes, frequencies, cut-off filters, gain/delay, and more. 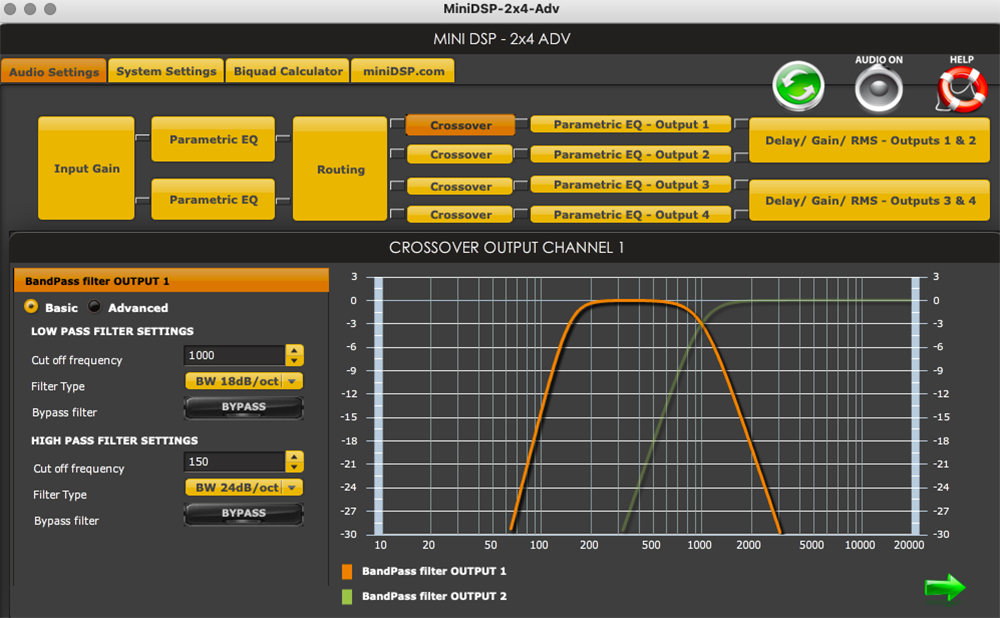 It’s simple enough that, with just a speck of critical speaker information (crossover frequency at bare minimum), a dolt like me can figure out how to safely make noise. In my case, I know that the Transar’s low-frequency driver plays down to 150Hz and it crosses over to the AMT tweeter at 1000Hz. I’ve played around with customizable slopes (6dB to 24dB), and with built-in crossover types like Butterworth, Linkwitz-Riley, and Bessel. And with my LTA microZOTL preamp’s dual outputs, I’ve added a subwoofer that handles frequencies below 150Hz to the preamp’s second output. That’s triamped full frequency.

My teenager says kids these days overuse the word “cringe,” as in That’s so cringe to mock or deride a minute or embarrassing horror. Using a 24/48 output resolution in my analog signal path? 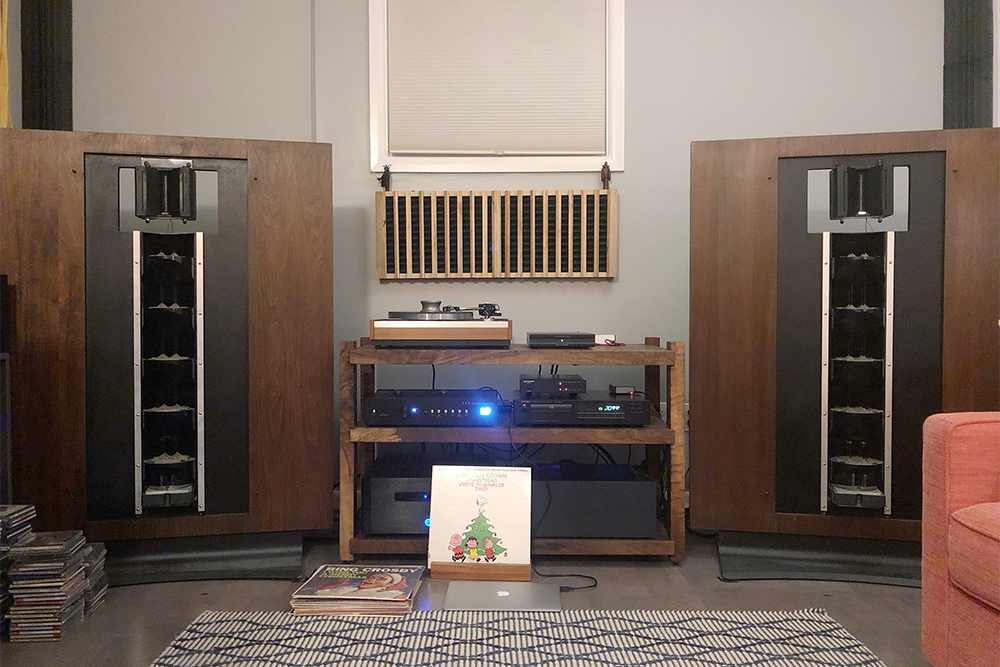 Perhaps in some other analog time, someone more brilliant than me would have thrown together some caps and resistors and coils to make these unicorn speakers sing outside of the digital realm. For now, the affordable immediacy of the intuitive miniDSP has brought my ESS Transars back from the dead.

*I don’t have any brothers.

This month’s selections feature modern updates to two of last month’s classic space-rock entries: Hum’s occasionally shoegazy frontman, Matt Talbot, unexpectedly dropped Inlet (Earth Analog Records, EAR-005)—the band’s first new music in 22 years—in November 2020. It’s lush, and it sounds great. Since reforming in 2015, Failure has been busy touring and recording, making up for lost time after disbanding in 1997. The trio’s newest is Wild Type Droid (Failure Records, LP6), released in December 2021, and I think it’s their most cohesive effort yet. Don’t miss guitarist Greg Edwards’s closing track, “Half Moon.” I’ve had it on repeat for most of January.

On the other hand, I spent the rest of the month obsessed with Will Ramos’s vocal techniques on deathcore band Lorna Shore’s new EP . . . And I Return to Nothingness (Century Media, 19439909011). “To the Hellfire” was the metal industry’s song of the year in 2021, and it’s not hard to see why: it’s got speed, detail, blast beats, virtuosic solos, and Ramos’s ability to enunciate thoughtful lyrics through deep-fry and false-chord vocals. The duality is real with this one—check out Ramos’s smiley Tea Time Interview with opera singer Elizabeth Zharoff on her show The Charismatic Voice, or the one-take vocal reaction to “Of the Abyss” from vocal coach Mark Garrett at Kardavox Academy. What you come to learn is that extreme metal musicians (and the metal community) are incredibly diverse, not actually angry, and maybe kind of fun-loving and sweet, even if they sometimes squeal like dying animals. It’s hard not to be wowed—even if it’s not for you.