By all accounts, I should be asleep right now -- I've been up for more than 36 hours. Most of that was due to the 15-hour travel time from Canada to Vicenza, Italy, for the Sonus Faber company's 30th anniversary, and my inability to sleep on a plane. But what got me jazzed enough to stay up even longer and write this was the company's complete reimagining of their stand-mounted '90s-era Extrema loudspeaker, now dubbed Ex3ma (pronounced ex-three-ma), which is being released at this event. 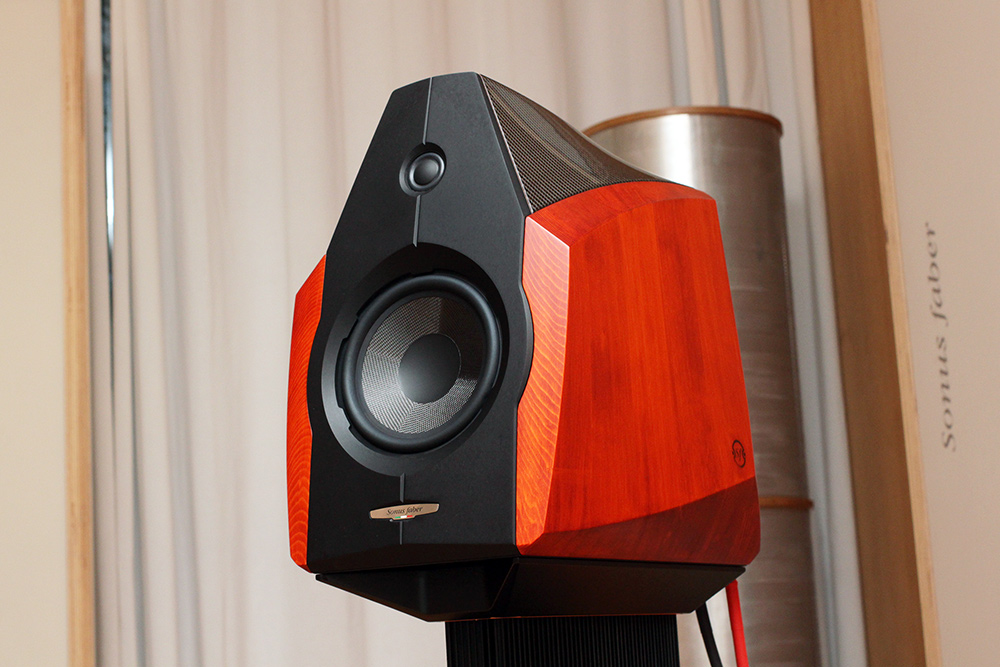 Like the Extrema, the Ex3ma is a bulky, stand-mounted, two-way design with a passive radiator on the back. There is also a visual resemblance that's deliberate. Other than that, there's little else that's the same as the original. 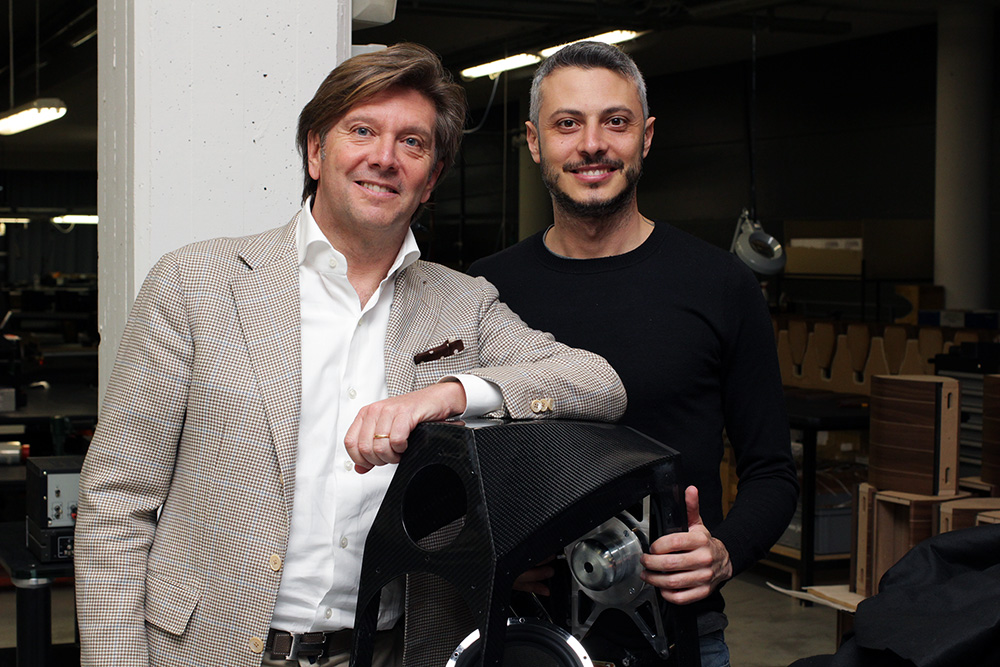 To create this model, Sonus Faber's boss, Mauro Grange, wrote the company's chief acoustic engineer, Paolo Tezzon, and chief industrial designer, Livio Cucuzza, a blank check to let their imaginations run wild and create a cost-no-object stand-mounted monitor that was inspired by the '90s-era, now-classic design, but would be considered by today's standards to be nothing short of state of the art. So that's what they did. 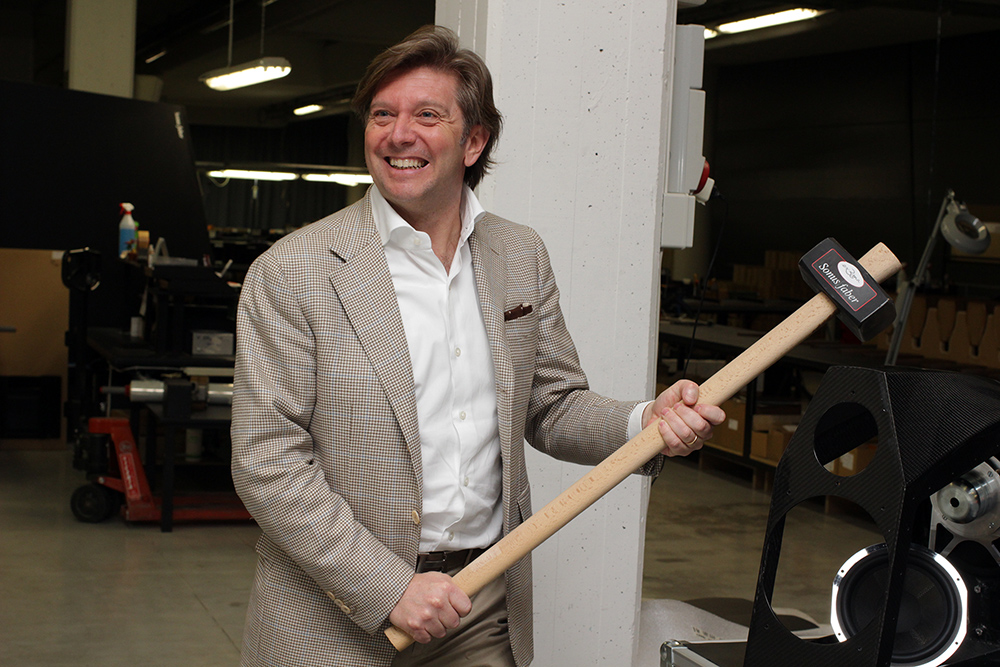 Then Mauro added another wrinkle -- limited edition, such that only 30 pairs would be made, each with unique design elements to make them one-of-a-kind creations. To further ensure exclusivity, after the unveiling the company is literally breaking the mold that helps create the carbon-fiber main enclosure for the speaker -- they even have a sledgehammer at the factory to do the damage, perhaps by Mauro himself. Talk about creating something rare! So rare, in fact, there's no official retail price for the Ex3ma -- prospective buyers are invited to hear the speaker at Sonus Faber's factory, and if they want it, only then will price be discussed. If they buy a pair, a senior Sonus Faber staff member will personally install them in their house. Suffice it to say that the Ex3ma isn't likely to be cheap (Mauro wouldn't even give me a hint as to how much the company wants for each pair). 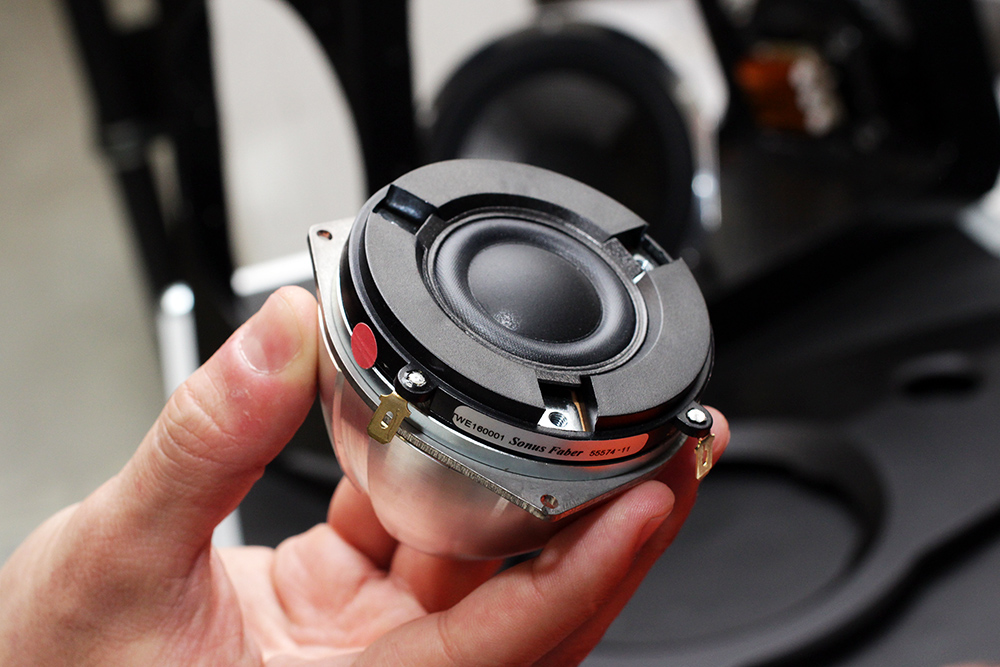 The drivers for the Ex3ma are brand new: a diamond-over-beryllium tweeter (carbon dust is bonded to a beryllium dome); a carbon-fiber-based midrange-woofer with a diamond-over-beryllium dustcap; and a "racetrack"-shaped, carbon-fiber-based passive radiator that can be custom tuned via four switch settings on the rear. The drivers hand off to each other at about 2.5kHz. What's more, every crossover will be point-to-point wired and made by Paolo Tezzon himself to ensure the utmost in quality. 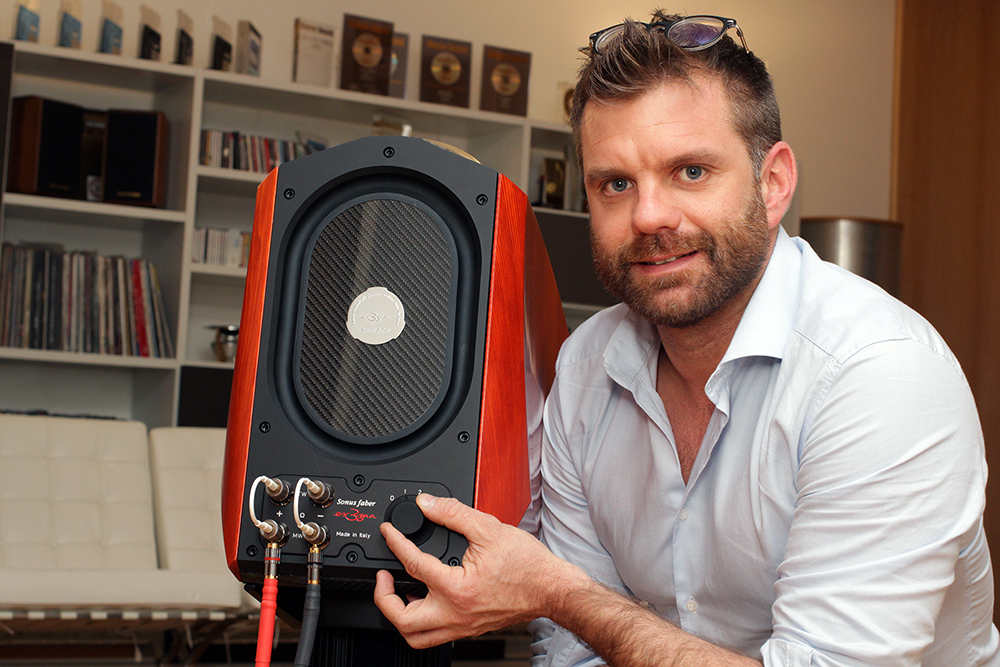 Paolo Tezzon shows the switch settings on the rear

The cabinet is even more impressive: a main carbon-fiber-based, monocoque enclosure with a wood core; specially selected wood for the sides (aesthetically and for the resonance properties); and an aluminum front baffle with a copper layer sandwiched between it and the main enclosure. A thoroughly original design flourish courtesy of Cucuzza is a small window on the cabinet's underside so that the owner can see the backside of the midrange-woofer, which, incidentally, looks fabulous with the different metals it's constructed from. 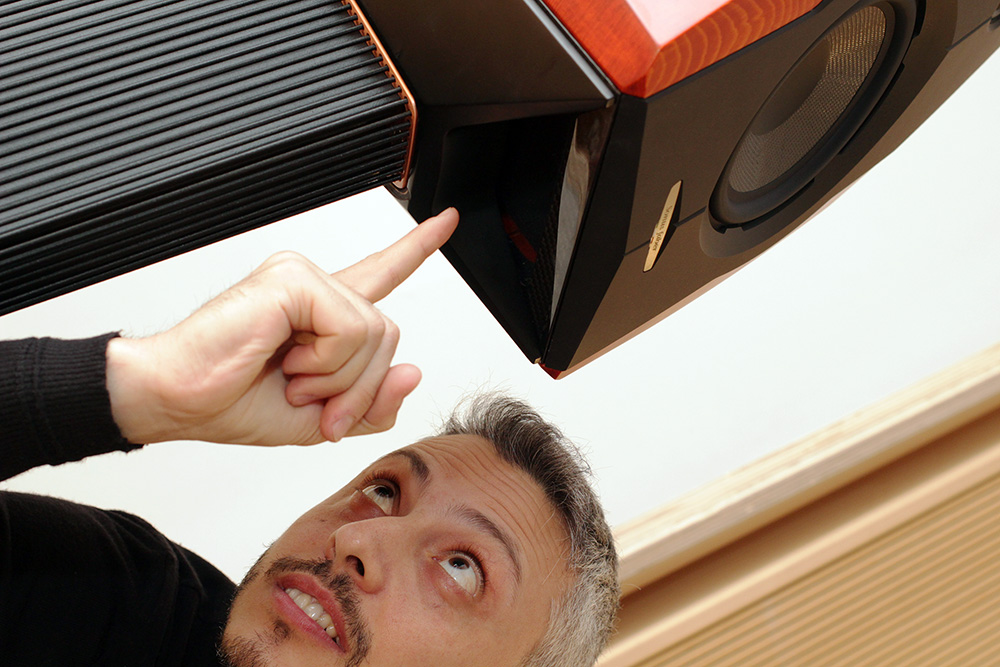 Livio points to the window on the underside

The stand the speaker rests on has a granite and epoxy base holding an aluminum pole that's specially tuned to eliminate resonances. The pair I saw and photographed were the production prototypes and were almost entirely the same as what will be produced, but the production models will have glossy side panels, not matte ones, which were on display in the production area. 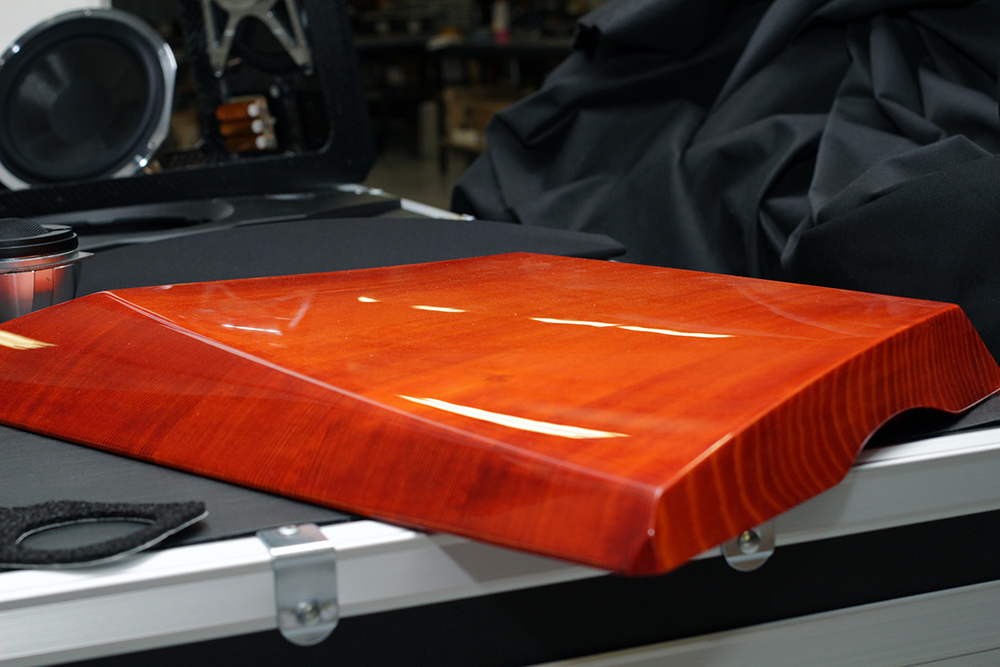 According to Tezzon, the entire Ex3ma project took a year to complete -- 50 percent longer than most other Sonus Faber designs. According to Cucuzza, every design detail he wanted in the speaker was implemented -- he's especially proud of the quality of the carbon-fiber work . . . 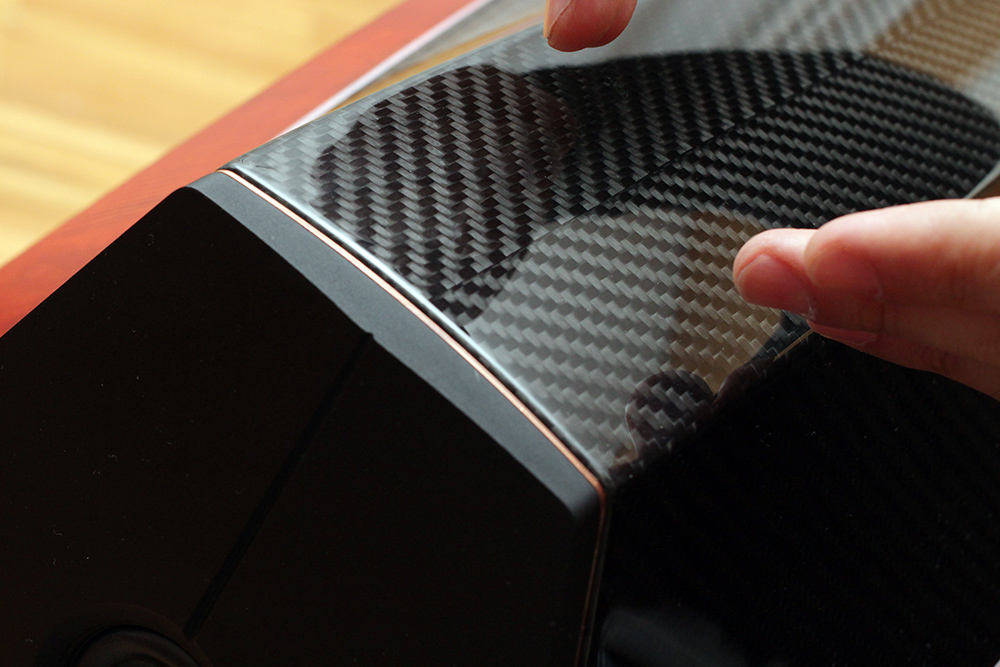 Cucuzza shows the quality of the carbon fiber

. . . which he believes is the best you'll find anywhere. Finally, Mauro Grange concedes that given how much went into developing the Ex3ma and how few they're actually selling of it, they'll probably lose money on the project. Yet after he said that, he smiled and added, "But we produce the products that we love. That's the difference with us." Indeed. 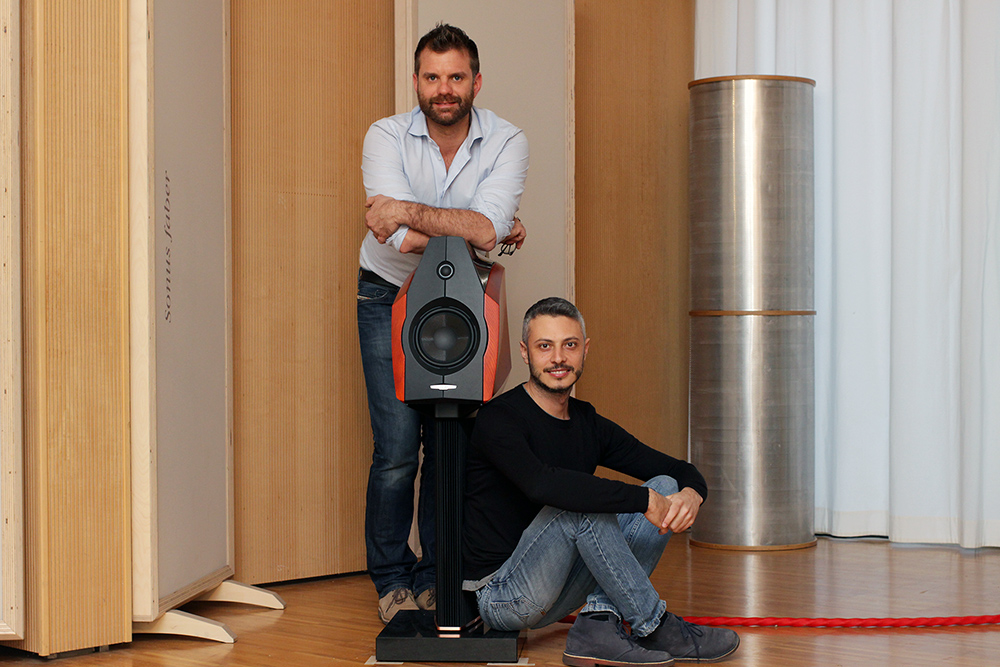