“Aida is Aida and it’s timeless,” Sonus Faber industrial designer Livio Cucuzza told me. His statement goes a long way to explain why the newest version of the Aida loudspeaker, which was unveiled in the largest display room at the Warsaw National Stadium location of Audio Video Show 2017, looks pretty much the same as the one that debuted in 2011. “Cosmetically, no big changes—just updated the front and rear baffles,” he added. He also said that in addition to the Red and Walnut finishes of the existing Aida, the new model is now available in a dark-brown Wenge finish, which debuted at Munich’s High End 2017 in the company’s Homage series. 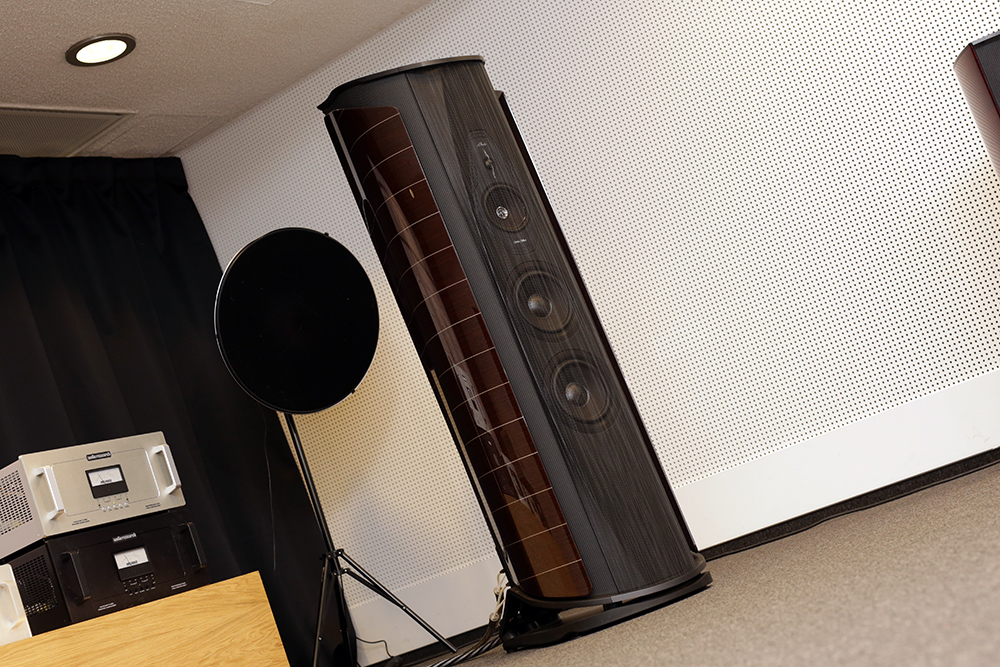 Seeing so few cosmetic changes immediately got me to thinking that Sonus Faber eschewed a name change because the new Aida looks so much like the original, something that Sonus Faber marketers Fiore Cappelletto and Marta Vecellio corroborated when I asked them later in the day. They told me that although the idea of some sort of name change was batted around the offices, at the end it was like Cucuzza said -- Aida is Aida -- so they left it at that. That said, I expect some people (including me) will call it Aida 2017, just to differentiate the two.

That’s not to say there haven’t been substantial improvements -- in fact, for audiophiles, they’re important changes because they will significantly affect the sound. The drivers have changed, necessitating a new crossover design. Even the cabinet has changed, although the alterations may not be visible. According to the company’s press release for the Aida 2017:

The typical lyra shape enclosure, as in the previous edition, is complemented by the “Anima Legata” system, the “Tuned Mass Dampers” and a revision of the special “Bow spring” suspension, which contains the “Zero Vibration Transmission” system, all designed to keep both the loudspeaker and the musical environment free from unwanted resonance and vibration.

Perhaps the most radical among the new changes is the selection of all-new driver systems. The tweeter is the “D.A.D. Arrow Point” H28 XTR-04, first used in the Sonus Faber Lilium and also in the most recent Homage Tradition Collection. The midrange is also promoted to an M18 XTR-04 enhanced with the avional gunmetal basket, the most advanced midrange driver in the entire Sonus Faber catalogue. This new combination of tweeter and midrange creates the “Voice of Sonus Faber,” the iconic configuration of driver technology capable of maintaining the effortless, warm and involving timbre that has become a trademark of the Arcugnano-based company.

As with the original Aida, the new version has one tweeter, one midrange, and two woofers on the front panel, and a single downward-facing subwoofer mounted on the underside of the cabinet and firing toward the floor. Although they call it a 3.5-way in the literature, in talking to Sonus Faber’s acoustical designer, Paolo Tezzon, I found out it’s really what I call a 3.75-way, because of the way the drivers are crossed over. The two woofers’ low ends aren’t rolled off, so they simply add to the output of the subwoofer, resulting in more surface area to produce all that bass energy. Of the two woofers, however, it’s only the topmost one that goes high enough in frequency to transition to the midrange. It’s the way the two woofers work with the midrange that makes it, to me at least, a 3.75-way configuration as opposed to a 3.5-way one. The Aida also incorporates the company’s Sound Field Shaper technology, which involves the mounting of a level-adjustable tweeter and two midranges (the original Aida had only one midrange and a tweeter) high up on the rear panel that work in phase with the front drive units and are intended to create a more spacious and enveloping sound. 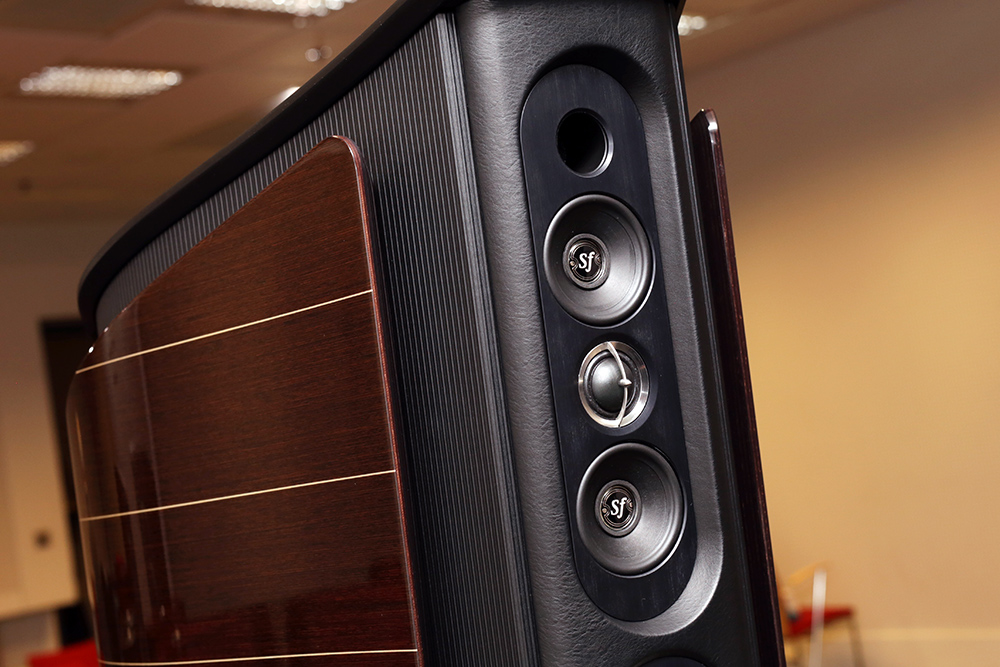 I asked Tezzon why these changes were chosen, and he said it was to incorporate all the technical advancements made in the other speakers that had been designed after 2011 into this one -- plus add some that those don’t have. Then he capped it off by exclaiming, “But with the new Aida, we surpassed them all!” 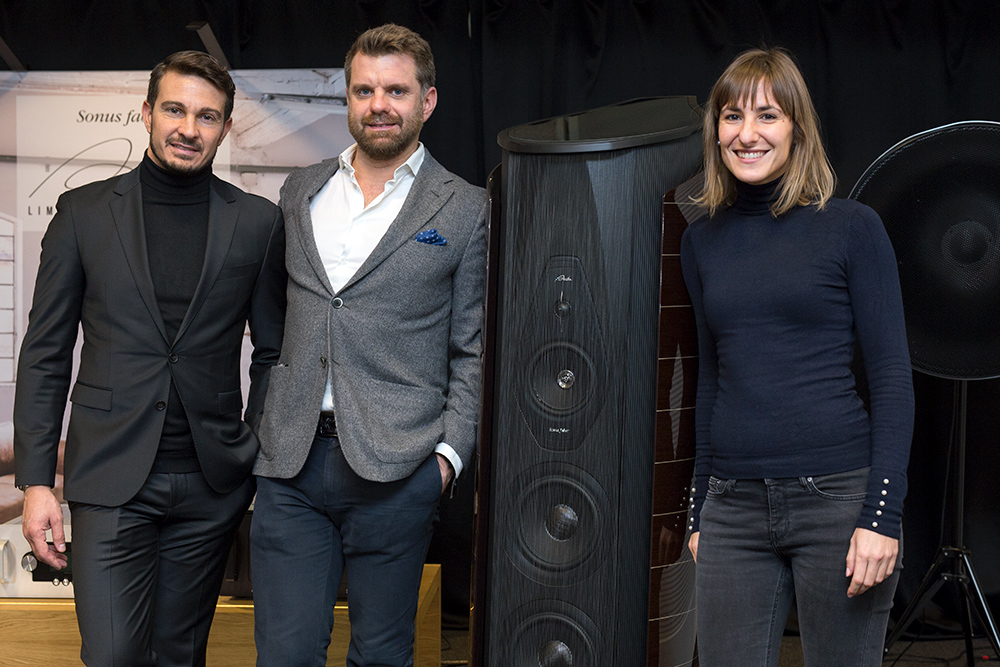 I think Tezzon is right. In the big Warsaw listening room befitting big speakers, driven with a host of Audio Research electronics, the Aidas sounded nothing short of spectacular -- ballsy, deep, powerful bass; a super-smooth midrange; spirited, effortless upper frequencies; and utter clarity throughout the audioband. Furthermore, with the tracks played, the soundstage was wide and deep, with centered vocal images that were focused and rock-solid. I thought it was one of the best-sounding systems I’ve ever heard at an audio show, as did fellow writer Brent Butterworth, who said as we were leaving, “That’s how a true high-end system should sound. It’s going to be tough to top that.” He was right -- we didn’t hear another system on the first day that sounded nearly as good. 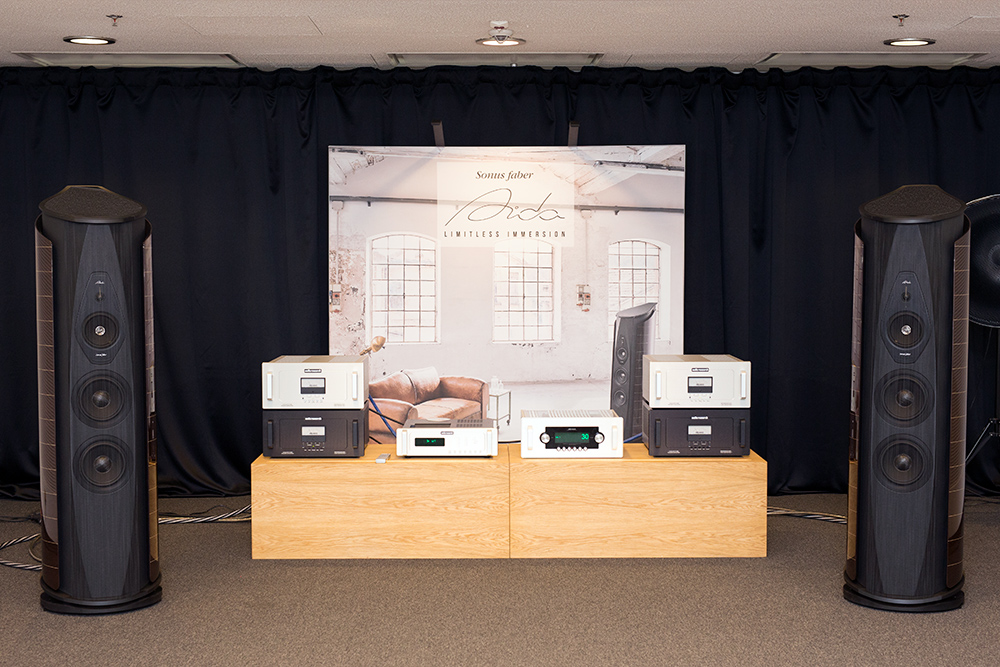 If you’re interested in what Sonus Faber’s new flagship costs, its price is €82,000/pair (plus VAT). If you want to hear the Aida 2017, you can in December when it becomes available worldwide.