Here’s how crazy our pace became: As we were leaving the PGE Narodowy stadium on the first day of the show, we saw the shuttle bus about to depart. At Doug Schneider’s urging, I ran to flag it down. Unfortunately, there were four floodlights placed around the exit, pointing up at the building. One wasn’t working, and the other three faced in my direction, essentially blinding me. At full speed, I ran directly into the one that was switched off, and it took me out at the knees. I thought I’d fallen into a hole, as I flew forward and landed stunningly hard on the cement. The result was a nasty gash on my leg and bruises on both knees. Although Doug thought I’d broken both legs, I was merely hurt, not injured. I take the risks for you, readers. It’s dangerous out here. Don’t try this at home. 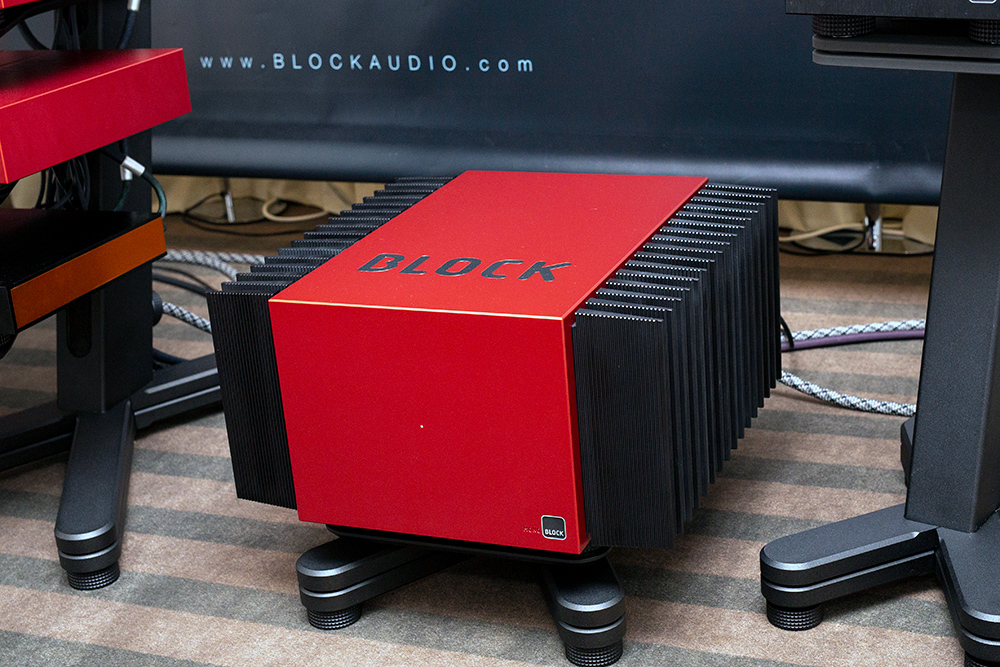 Now we’re talking statement-level stuff -- Block Audio, which is from the Czech Republic, had on hand the Mono Block SE amplifier. This is that rare beast, a 200Wpc true class-A amplifier. Should you need more power, the Mono Block SE can chug out 500Wpc in AB mode via the flick of a switch. As you might expect, this amp runs hot -- superhot when I touched it. The company recommends a complete Block Audio system, but a pair of Mono Block SE amps on their own cost €52,000. 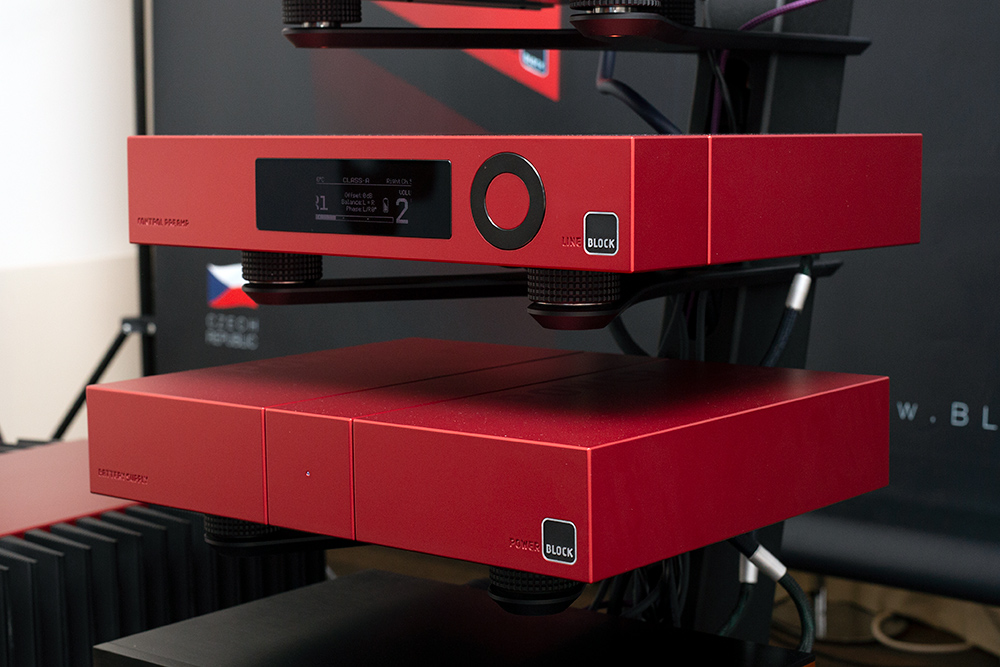 Should you wish to build a complete Block Audio system, you can also purchase the company’s Line and Power Block SE preamplifier and Mono Block SE together. The Line and Power Block SE preamplifier is true dual mono, with a separate dual-mono, battery-based power supply. It even runs from the battery when it needs to charge. The entire system’s circuitry is balanced from start to finish. We looked at . . . 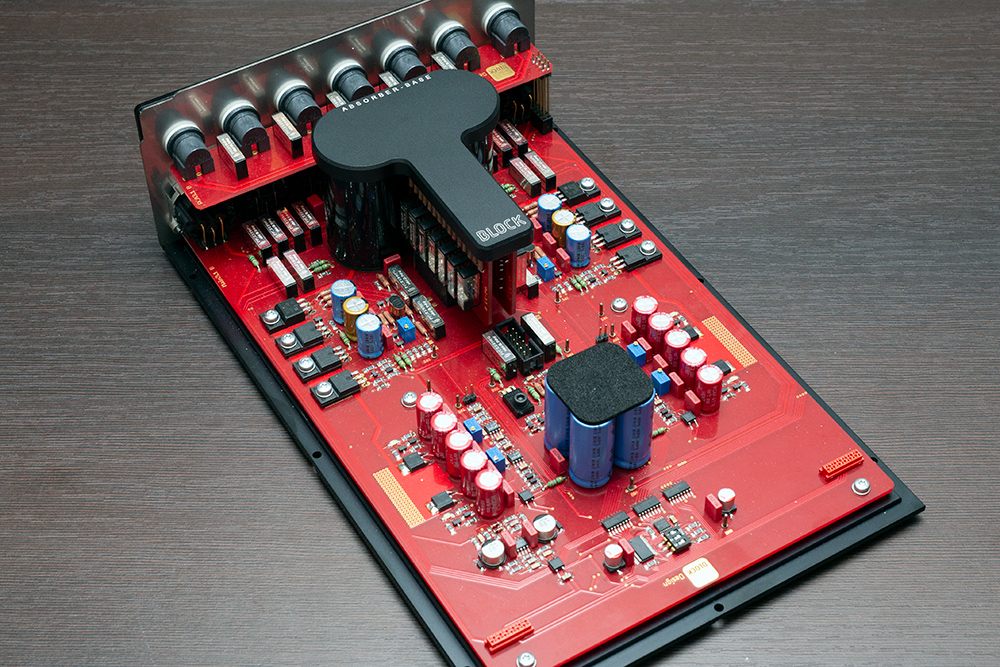 . . . one circuit board and it looked to be extremely well laid-out and chock full of the highest-quality parts. The Line and Power Block SE retails for €37,500, but in the chaos that is the Audio Video Show, I originally lost the price of the preamp and had to go back and revisit the room. To my delight they were playing Talk Talk’s The Colour of Spring, so I sat down and did some listening. This was a spectacular-sounding system. 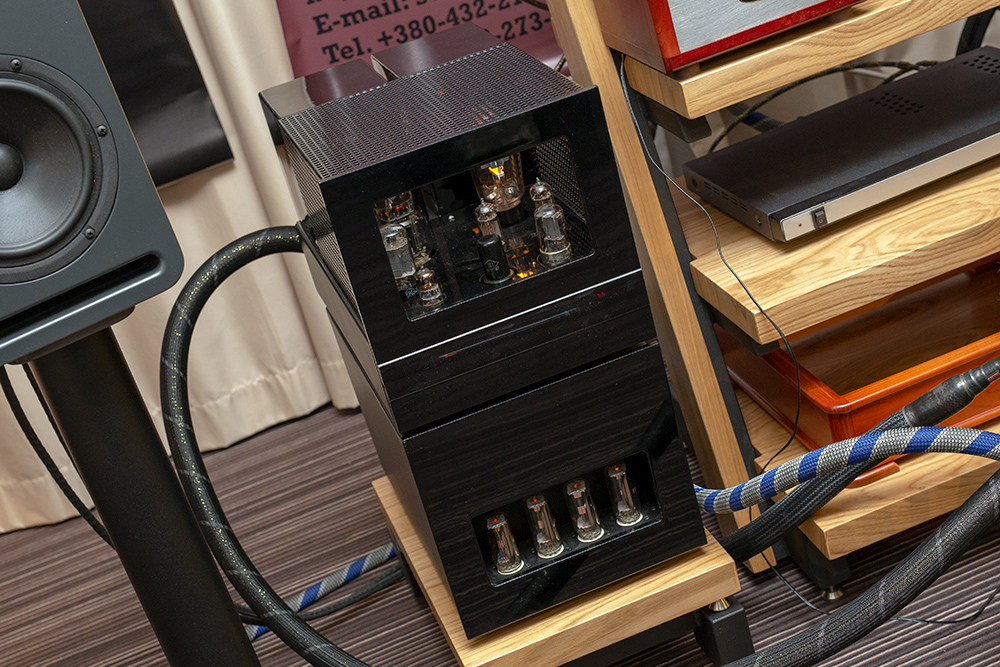 Interface+ is big on its plus symbols. At AVS, it showed the €14,000 SE811+33 Duet 36Wpc single-ended mono amplifier. Each mono amplifier has separate chassis for the amplifier circuitry and the power supply. The power tube is a single 811, and it’s backed up by a flurry of other tubes. The company is based in Vinnytsia, Ukraine. 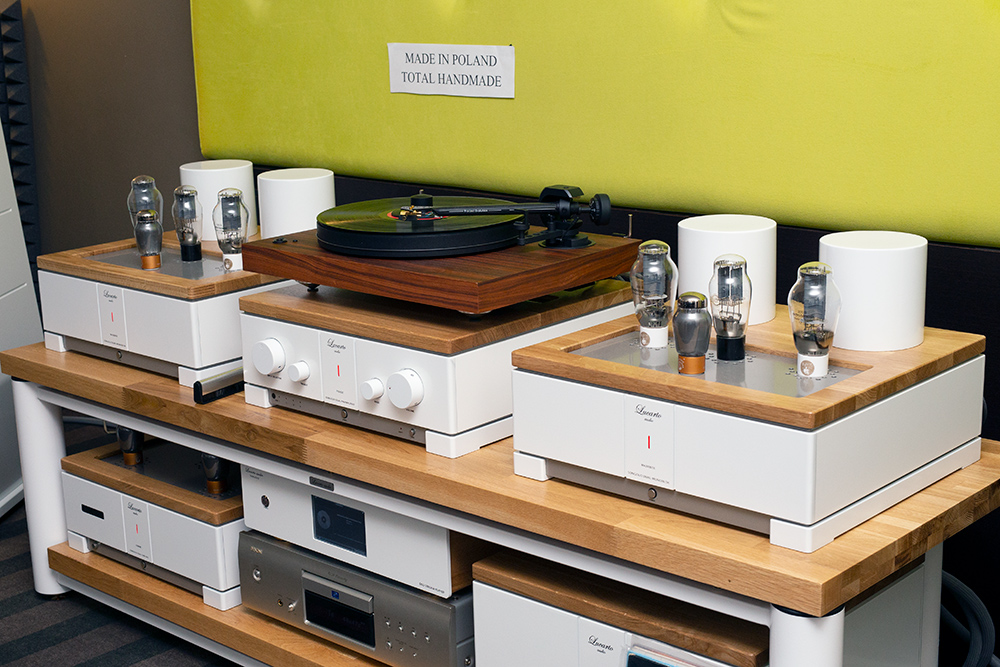 New for the show were Lucarto Audio’s mono amps and preamp. The company hails from Opole, Poland. The zł10,400 Songolo P300SE tube preamplifier is a dual-mono hybrid design, with transistors running in class A and used to control a pair of 6N6P tubes. The amp is the Songolo MA300BSE (zł18,600 per pair), which employs a CV181 input tube, two 300B output tubes, and a 5C3S rectifier tube. Power output is 14W. 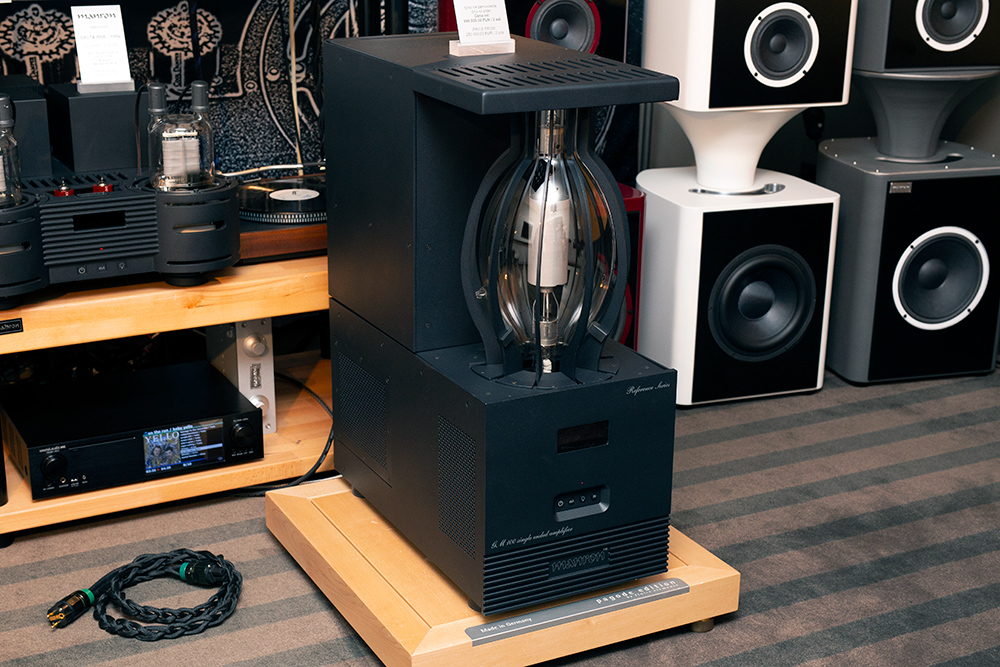 Manron, based in Torun, Poland, manufactures a number of tube amplifiers, but the big news was the company’s terrifying Delta δSE150m 150W mono amplifier. This single-ended triode amp is powered by a GM100, which is a big-ass 1kW radio transmitter tube. I wasn’t around when they booted this thing up, and to tell the truth it scared me a little, so I’m not sad about missing it -- but Doug went back later to get a picture when . . . 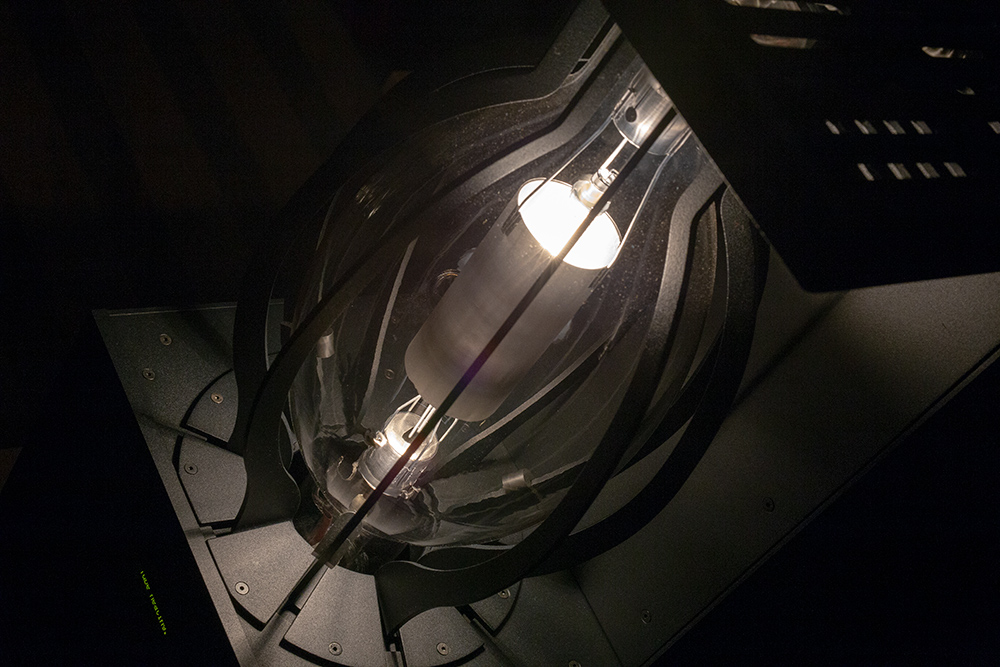 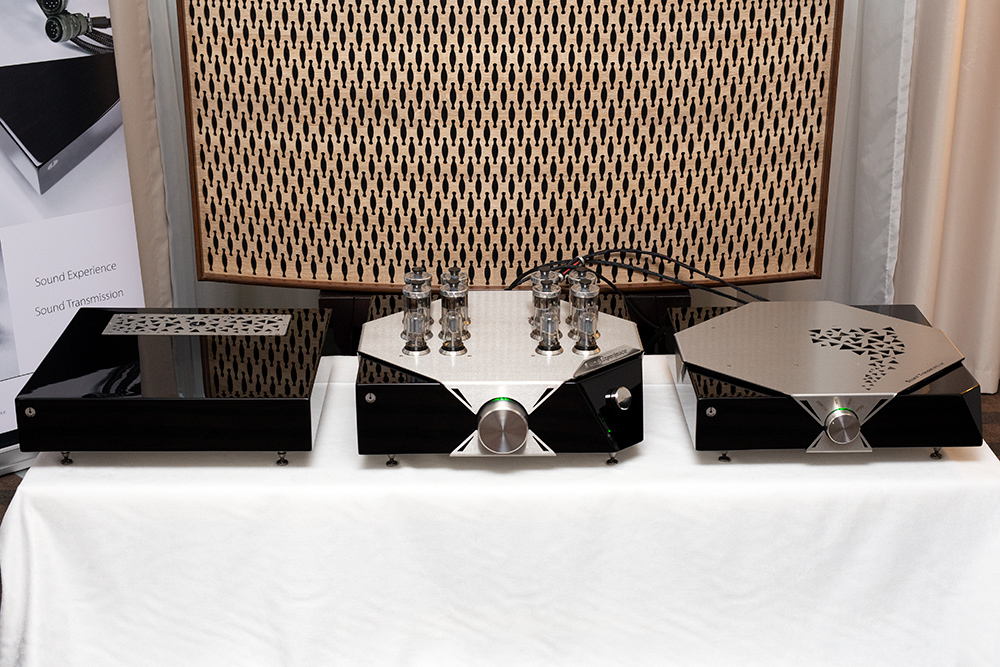 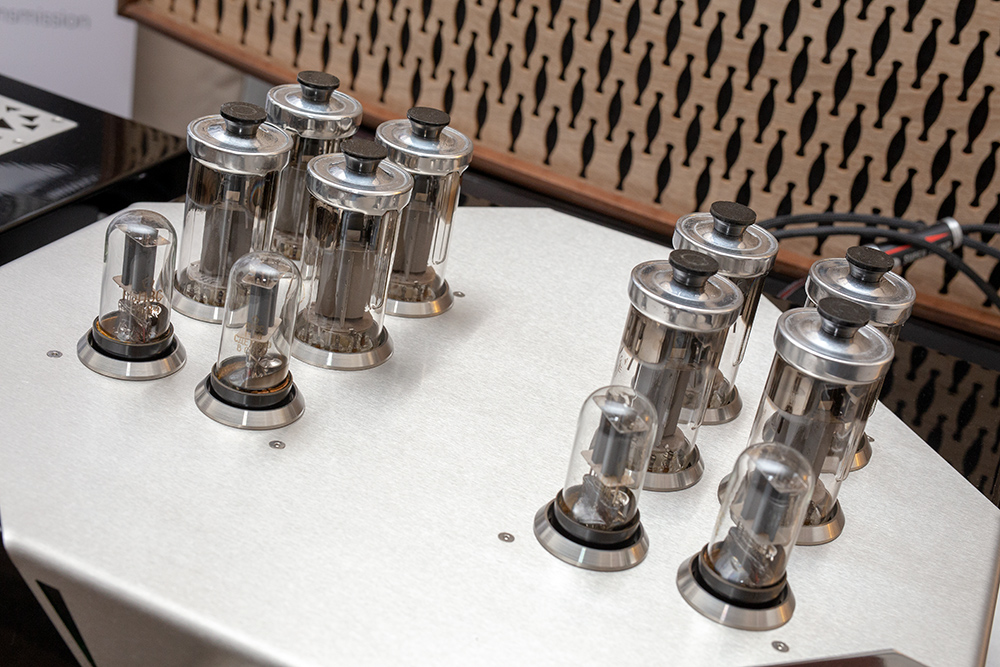 . . . Russian radio-frequency GU50 tubes, the amp is built with a separate power supply (left). The input stage employs two 6N8S tubes per channel. The SE-PP60 retails for zł65,000. The company was also showing . . . 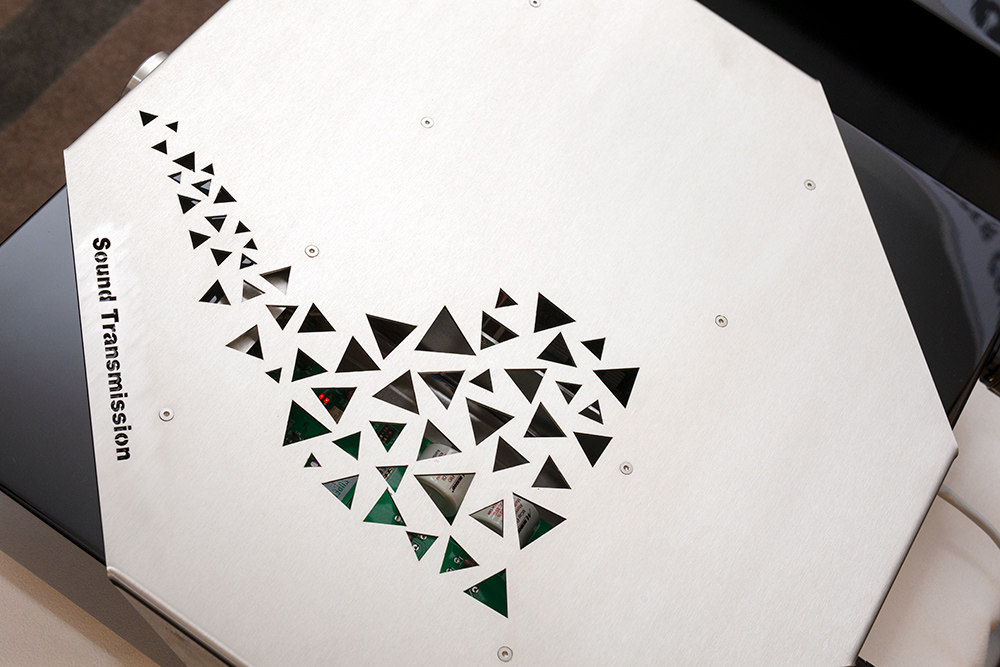 . . . its ST-DAC-1 (also far right, two photos above this one), which is based on a PCM1794 chip communicating via an XMOS USB processor. The ST-DAC-1 is powered by a Raspberry Pi running Volumio software. The analog output is tube-based, using a 6N16BV tube. There’s a hard disk for storage, and the unit also streams pretty much any audio format you can imagine. That’s lots of functionality for zł18,000.