The 2018 CanJam SoCal headphone show, held at the JW Marriott Los Angeles L.A. Live hotel in downtown Los Angeles, wrapped up on Sunday. As one of the most high-profile headphone events in the world, CanJam SoCal always hosts a slew of new and recent products I haven’t seen before. I’ve already reported on several new headphones and earphones, as well as new amplifiers and a headphone processing app. Here’s the last of my three CanJam SoCal reports, again focusing on headphones and earphones. All products are presented in alphabetical order with prices listed in USD. 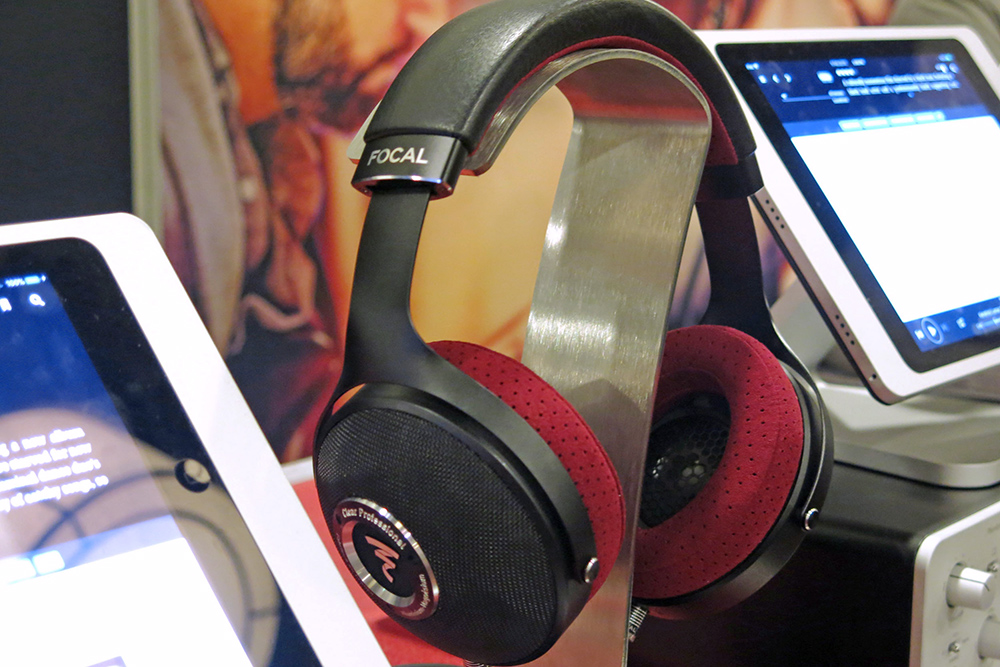 The Clear Professional headphones ($1699) are a pro version of the Focal Clear open-back dynamic headphones I recently reviewed for SoundStage! Xperience. The headphones are the same except that the Pros come with two cables (one coiled for studio use, and both tipped with a 1/4" plug) instead of the three included with the consumer version, plus a replacement set of earpads. In addition, the Pro headphones come in this awesome maroon-and-black color scheme instead of the staid gray color of the consumer version. Well worth the extra $200 over the consumer model, I say. 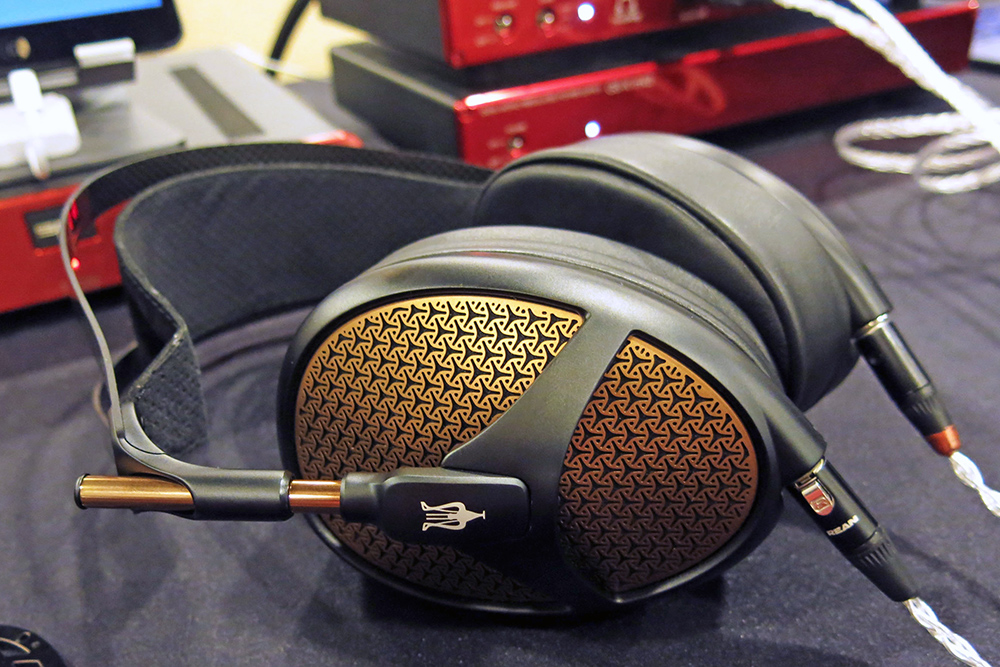 At a projected price between $3000 and $3500, Meze’s new Empyrean headphones, the company’s flagship design, will be about ten times as expensive as its current models. But they’re a much more special product. The headphones are made from CNC-machined aluminum, with a carbon-fiber headband. They feature what Meze calls a hybrid-array driver. It’s a planar-magnetic driver with its coil arranged so that it divides the diaphragm into a woofer section and a tweeter section, which you can see . . . 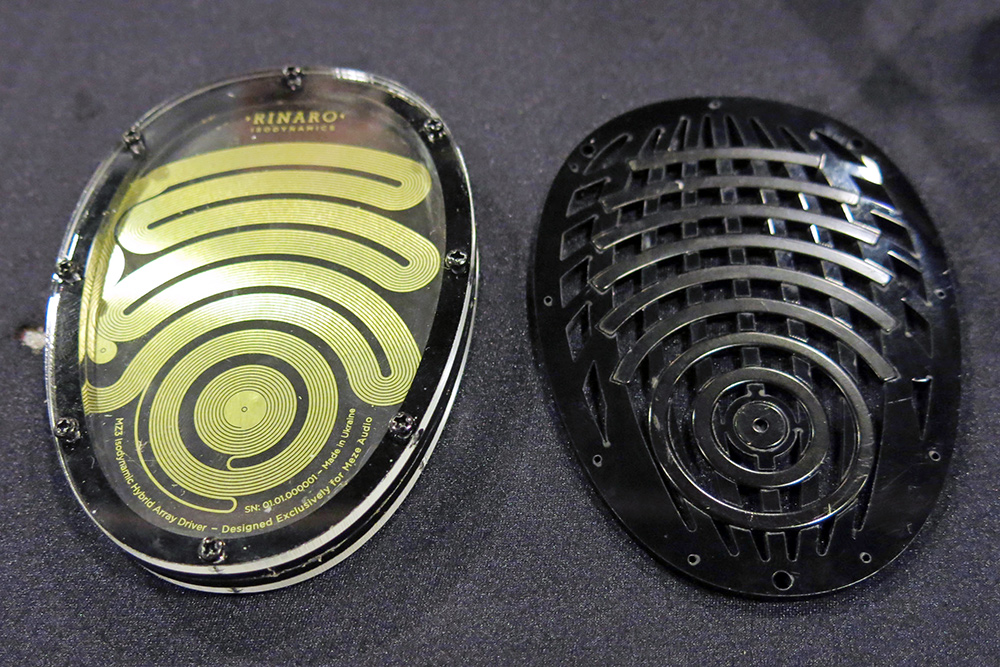 . . . in the photo, which shows the coil and diaphragm at left and the magnet structure at right. The circular part of the coil near the bottom functions as the tweeter, while the part of the coil that’s folded repeatedly on itself serves as the woofer. 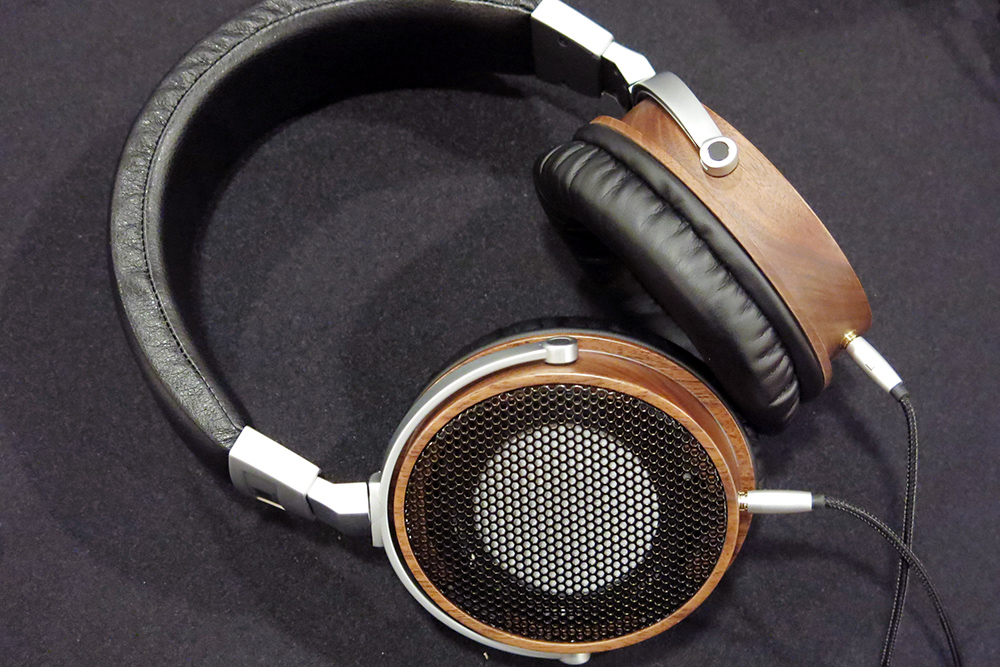 Monoprice showed several new models at CanJam SoCal, including the M565C ($229) and M1060C ($329) headphones, which are closed-back versions of the company’s M565 and M1060 ($199 and $299, respectively) open-back, planar-magnetic headphones. But the real star of the show was the new open-back, dynamic M650 headphones, shown here, priced at just $149. The M650s feature a 50mm driver per earpiece and come with cloth and leather earpads for two different tonal responses. 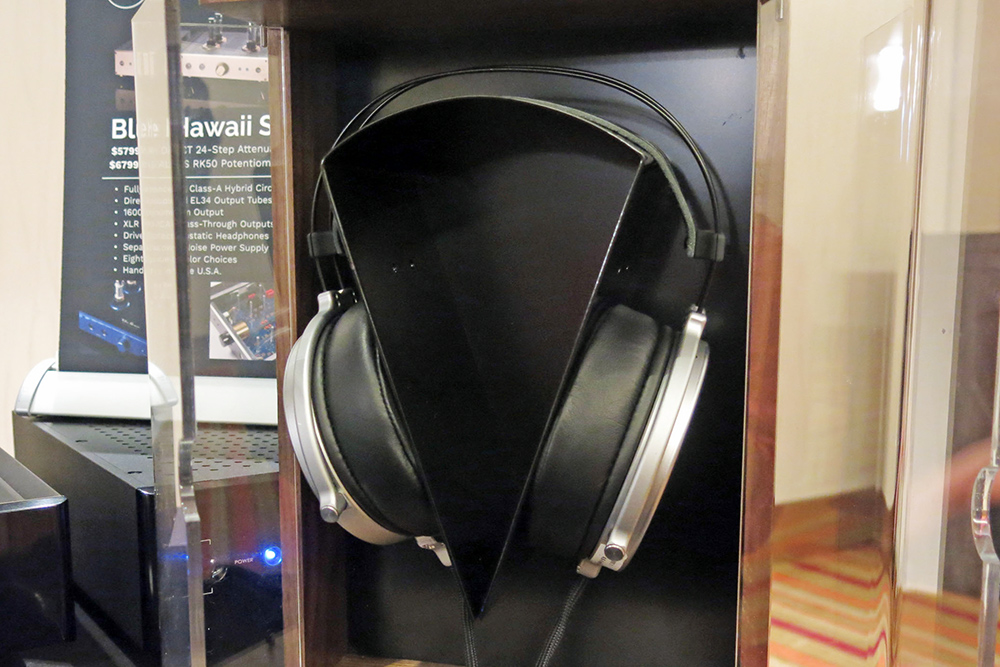 MrSpeakers has been showing prototype electrostatic headphones for a while, and now they’re finally finished. The Voce headphones ($2999) work with any amp compatible with Stax electrostatic headphones. They come with three different tuning pads for each ear, which fit behind the earpads. The pads are made from an extremely thin fibrous material, and they can be used in eight different combinations to adjust the Voces’ balance by altering the treble response. The combination presentation box and stand shown here is included. Finally, a presentation box you won’t just toss into a closet! 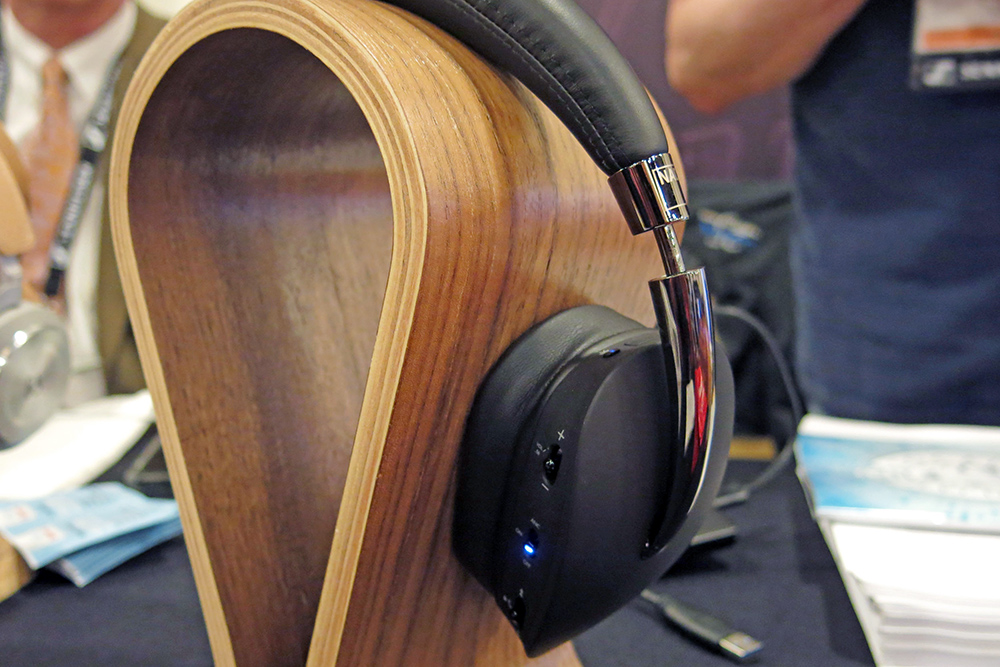 We’ve talked about the NAD Viso HP70s, NAD’s new noise-canceling Bluetooth headphones, for a while, but now they’re finally shipping. According to NAD/PSB speaker and headphone designer Paul Barton, the big difference between the HP70s ($399) and the PSB M4U 8s, another set of Bluetooth noise-canceling headphones he designed, is mainly the way they fit; he said some people like the feel of the HP70s (which are based on the passive Viso HP50s) better, while others like the feel of the M4U 8s better. The HP70s also use a different noise-canceling chip than the M4U 8s. Barton says it performs better than the M4U 8s’ chip at some frequencies, but not as well at other frequencies. 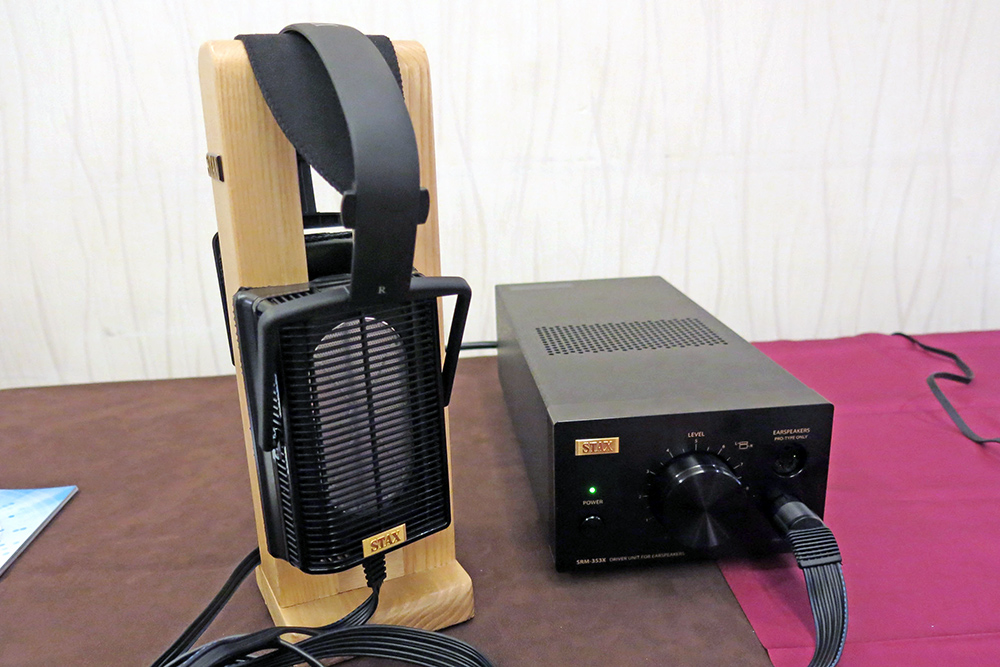 Stax built its latest electrostatic headphones and amplifier to celebrate the company’s 80th anniversary. Both are available as limited editions and won’t ship for another six months or so. The system comprises the SR-L300X headphones ($1200) and SRM-353X amplifier ($1800). The SR-L300Xes combine the best attributes of several Stax headphones: the earpieces from the SR-L700s, the cables from the SR-L500s, and the headband from the SR-L300s. 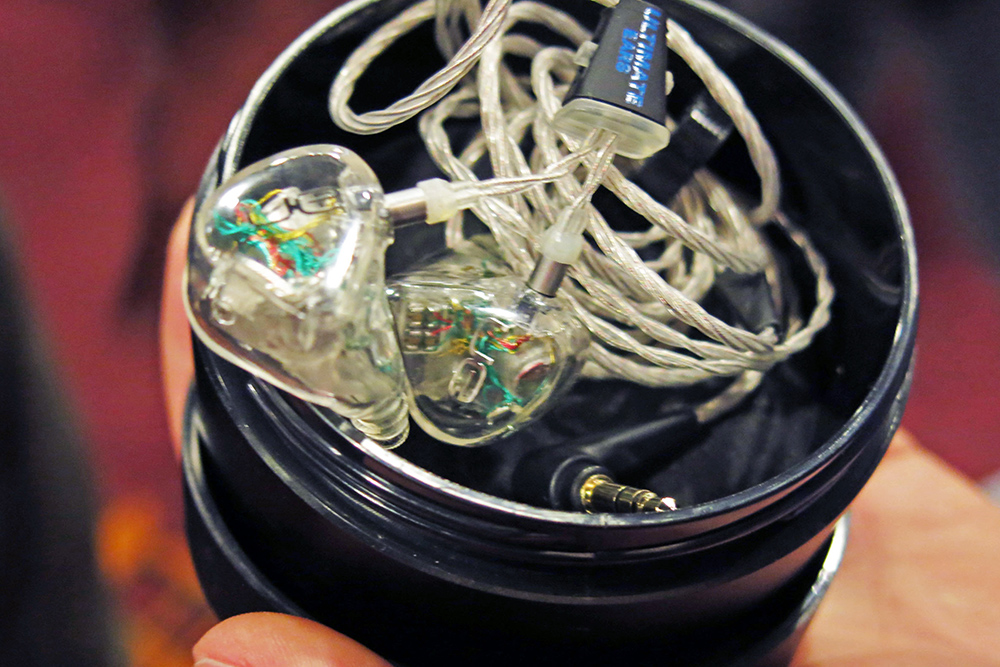 UE Pro specializes in custom-molded earphones for musicians and audiophiles. The company has taken many steps over the years to make its products more reliable and convenient; the latest is the IPX connection system, a set of connectors with an IP67 waterproof/dustproof rating that the company says has been tested for 3000 inserted/removal cycles. Removing them requires a firm, straight pull, thus lessening the chance they’ll come loose. The system, which also includes the new UE SuperBax low-impedance, high-durability cables (originally designed for cochlear implants), will be included on all UE Pro custom earphones. Also shown in this photo are the company’s new flagship UE Live earphones ($2199), which employ one 6mm dynamic driver plus seven balanced armatures per ear. 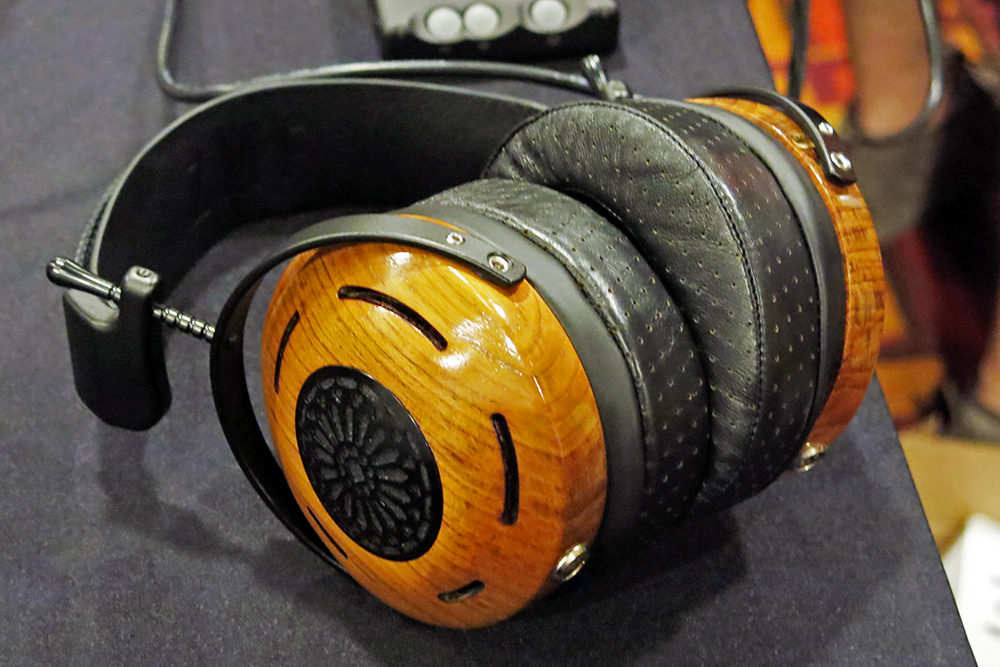 ZMF’s Auteurs are the company’s first open-back headphones. They use 300-ohm dynamic drivers with biocellulose diaphragms for better damping of high-frequency resonances. The headphones ship with two sets of earpads, your choice of which affects the tonal balance. According to the company, one sounds “meatier,” but deciding which is better is a matter of taste. The Auteur headphones are available in teak for $1599, and in African blackwood for $1699. ZMF says it’s down to its last few models in African blackwood, but the company will be coming out with a different upgrade wood option roughly every quarter. They’re still figuring out which wood will be next; right now they’re experimenting with Manchurian ash.