Here’s the second part of my coverage of new speakers I saw at the 2019 CEDIA Expo, which took over the Colorado Convention Center in Denver last week. In this part, we’ll look at some of the more exotic designs often seen at the Expo but almost never seen at other North American shows, including some in-wall and on-wall models. All prices in USD. 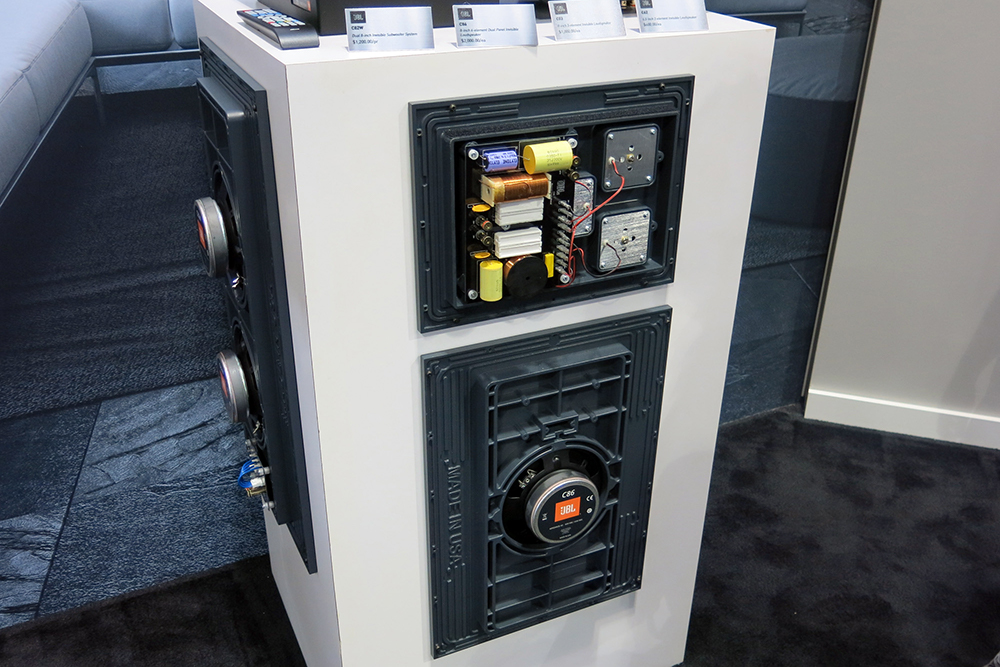 One of the biggest of the many surprises I found in the JBL booth was this new collaboration with “invisible speaker” manufacturer Stealth Acoustics, known for speakers that an installer mounts into drywall, then muds and textures so the speaker is indistinguishable from the rest of the wall. According to Harman International’s Jim Garrett, the C86 shown here ($2000 each) represents a “hot-rodded” version of Stealth Acoustics’ products. The lower section is an 8" woofer, while the upper section incorporates six drive elements that vibrate the front panel to produce mids and treble. Why the separate panels? Because driving the same diaphragm with different transducers would introduce intermodulation distortion. 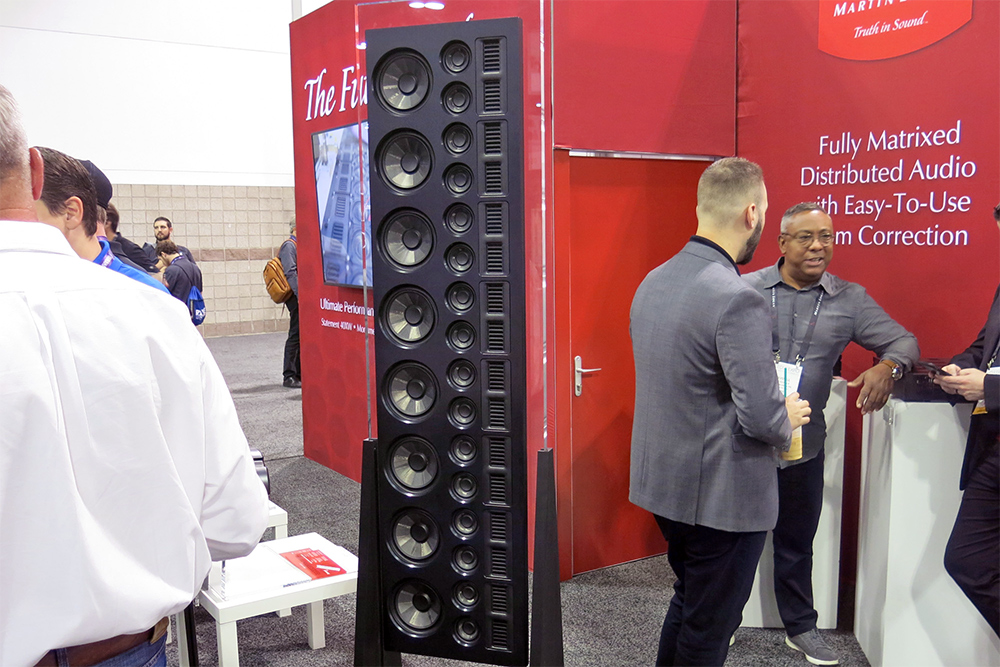 MartinLogan’s Statement 40XW in-wall speaker ($20,000 each) was the talk of the show, winning considerable praise for its sound, but it had competing manufacturers questioning whether there’s really a market for $40,000/pair in-wall speakers. But according to MartinLogan’s Devin Zell, “Our dealers have been begging us for high-performance custom-install products.” Each Statement 40XW packs low-, mid-, and high-frequency line arrays, made up respectively of eight 6.5" woofers, 16 3.5" midrange drivers, and 16 of the company’s Folded Motion XT folded-ribbon tweeters. 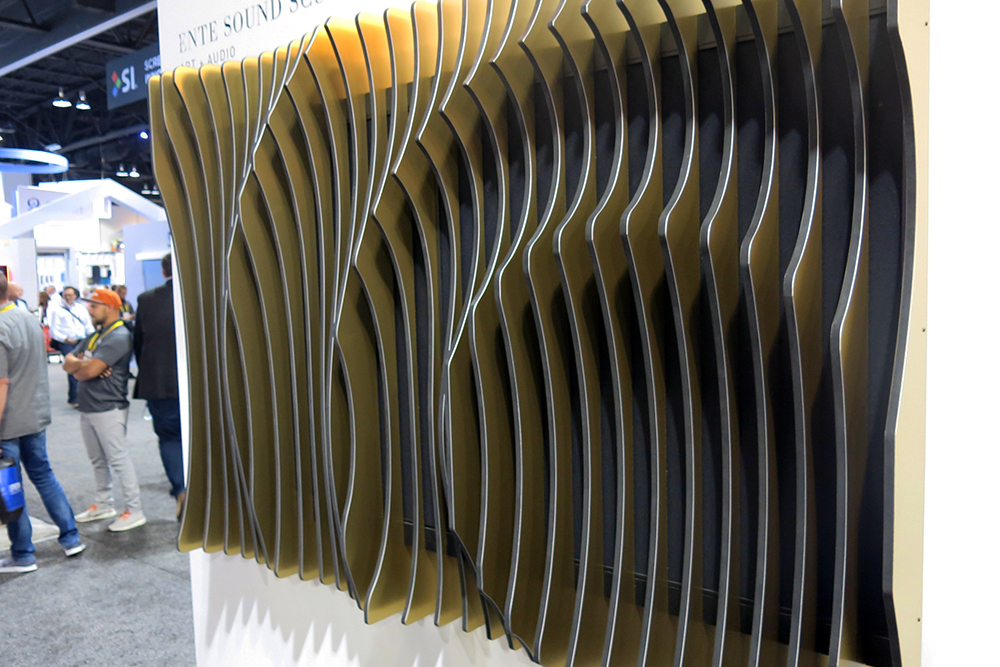 At first glance, I thought the Leon Speakers Ente Sound Sculpture was an acoustical diffuser, but the beautiful wave patterns actually conceal a Sonos-compatible wireless stereo speaker system. It was playing at very low volume when I was there, and the company rep I spoke with didn’t know the technical particulars, but he speculated that the speaker would cost $50,000 to $60,000 -- a lot for a wireless speaker, but not necessarily a crazy price for a work of art, I suppose.

Lexicon’s SoundSteer SL-1 is surely one of the most advanced speakers I’ve ever encountered. Each one packs a 10" downfiring woofer, four 5.25" midwoofers, sixteen 2" midranges, and twelve 1" tweeters. Each of the drivers except the midwoofers has its own amp channel; the midwoofers share an amp channel, and total power is 650W per speaker. A digital signal processor inside manipulates the sound from the multiple drivers to create beams of sound, allowing the listener to change the size and position of the sweet spot through an app. The blue rings around the speaker show the width and direction of the beam. A full system with two speakers and a wireless hub with built-in streaming will run $50,000. 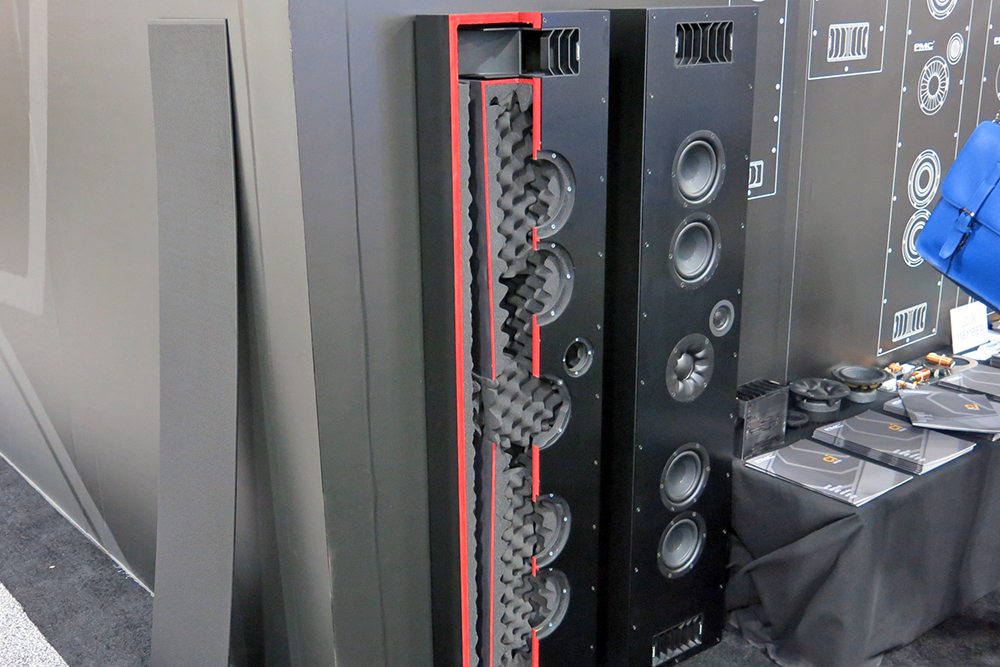 PMC’s Ci-series speakers represent a very serious effort to get audiophile-grade sound into an in-wall speaker system. The flagship Ci140 shown here packs four 5.25" drivers into a transmission-line enclosure said to deliver high bass output down to 30Hz, and 119dB of volume at 1m. A 2" dome midrange and 1" tweeter provide the mids and highs, respectively. The “140” in the model number refers to the speaker height in centimeters; there will also be Ci30, Ci45, Ci65, and Ci90 models, as well as a Ci140sub subwoofer. The price of the Ci140 is $6000 each, but the prices for the other models are not yet available. 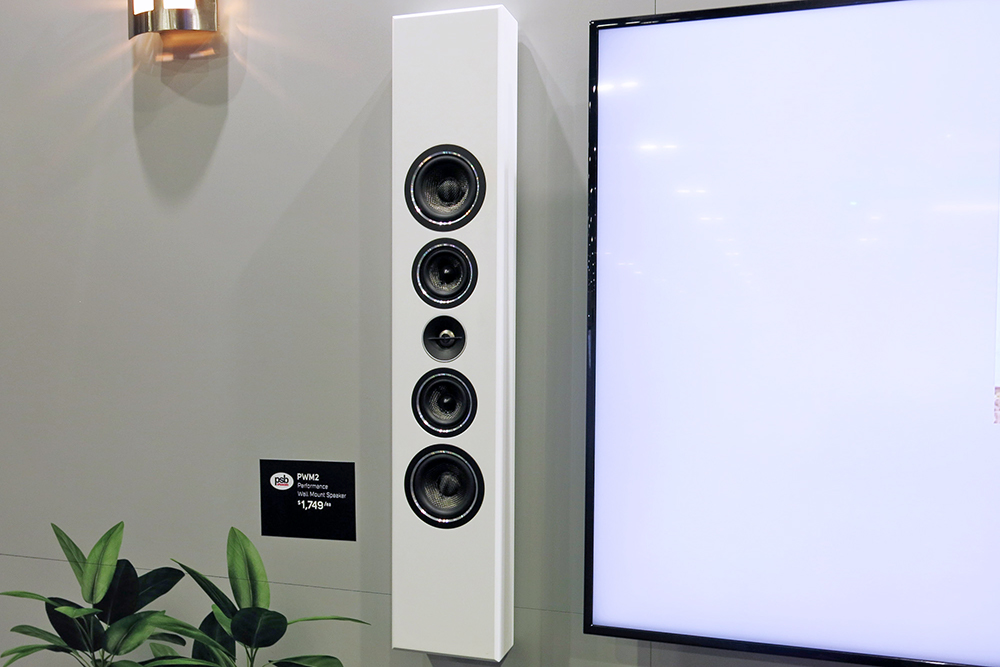 PSB’s PWM2 ($1749 each) is a new high-end on-wall speaker designed to flank flat-panel TVs or projection screens. It represents the middle of what will be a three-speaker line. The driver complement includes two 4" woofers, two 3" midranges, and a 1" tweeter, and the cabinet is ported top and bottom. The 4"-thick speaker can be used as a left/right or center speaker, and it’s available in white or black.