At every audio show, I find numerous cool new products that don’t fit the categories we’ve created, or that fell through the cracks of our other articles. Of course, CES 2018 in Las Vegas was no exception. So I’ll wrap up my CES 2018 coverage with a column full of the odds and ends that caught my eyes and ears. Here they are, with all prices listed in USD. 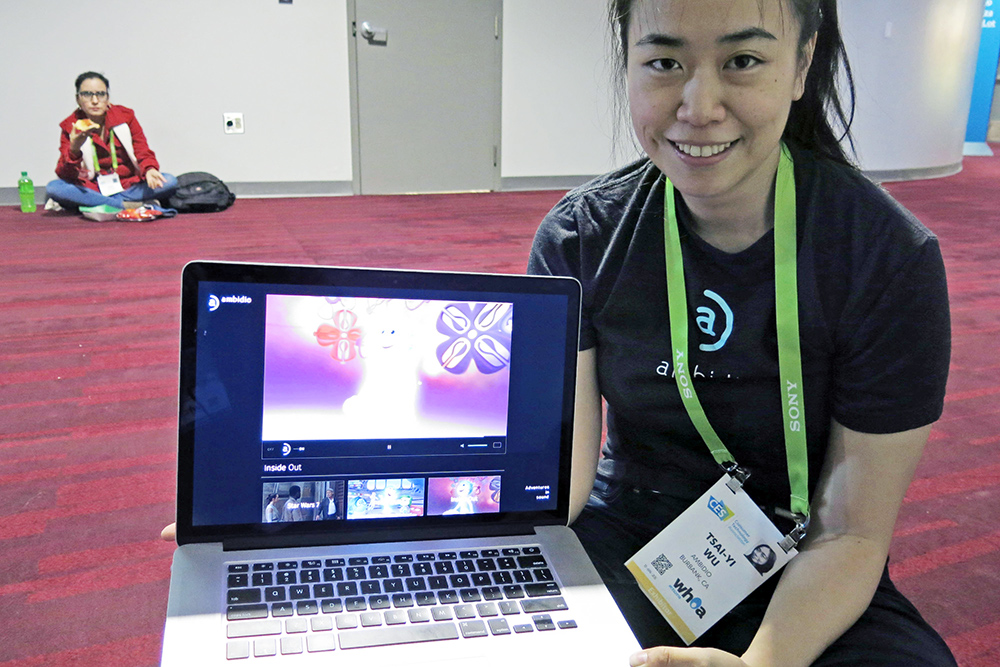 The only place Iris Tsai-Yi Wu and I could find to meet at CES was on the floor outside the North Hall at the Las Vegas Convention Center, but her demo was so good I didn’t mind. She founded her company, Ambidio, to apply the anatomical knowledge she gained in med school to her real passion: audio production. Ambidio’s technology folds down multichannel material to stereo while preserving the surround-sound effect. I’ve encountered many such technologies, but hers delivered some of the most convincing rear-channel effects I’ve heard -- despite her demo rig, which was nothing more than a stock Apple MacBook and a smartphone whose brand I didn’t catch. (Listen to the demo clip from Star Wars: The Force Awakens on your laptop to get an idea.) The company was part of Disney’s 2017 Accelerator program, and has worked with Skywalker Sound and NPR. The idea is that studios will pay Ambidio to license its process for their releases. I don’t know enough about Ambidio to form a judgment about it yet, but I have to say Iris’s moxie reminds me of two other audio entrepreneurs I was lucky enough to know: Ray Dolby and Henry Kloss. 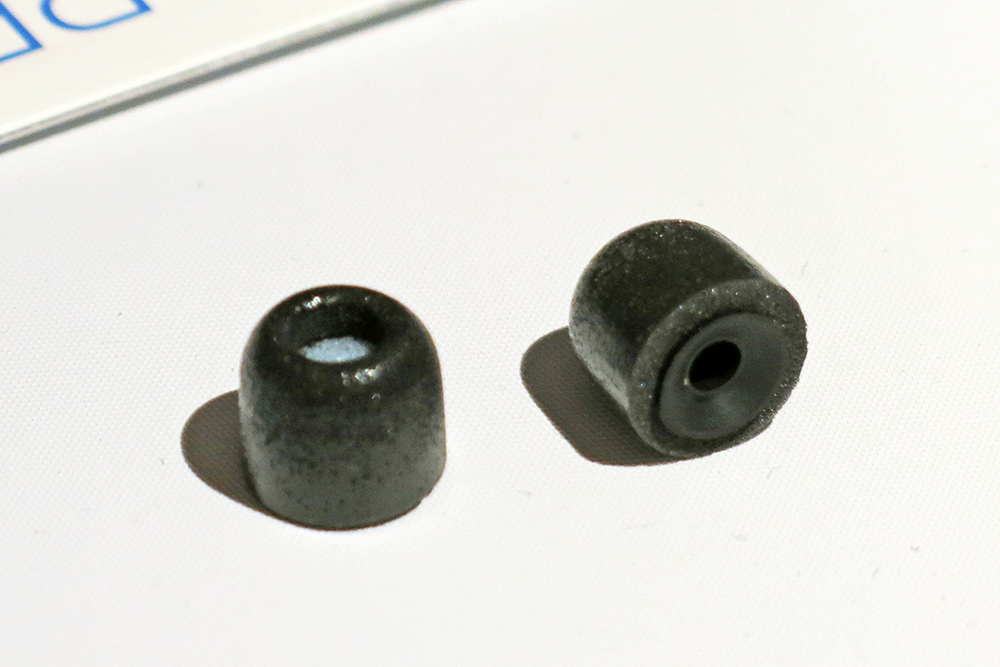 Many earphone enthusiasts (this one included) love the tight seal and comfortable fit of Comply foam tips, but ordering them can be a little complicated because you have to choose the right size for your earphones’ soundtubes. The company’s new SmartCore tips ($19.99 for three pairs) have an internal flange that stretches to fit most tips. According to Comply, the SmartCore tips will fit all but the tiniest soundtubes, such as those found on many models from Klipsch, Shure, and Westone. And you can buy them from outlets such as Best Buy rather than ordering them. 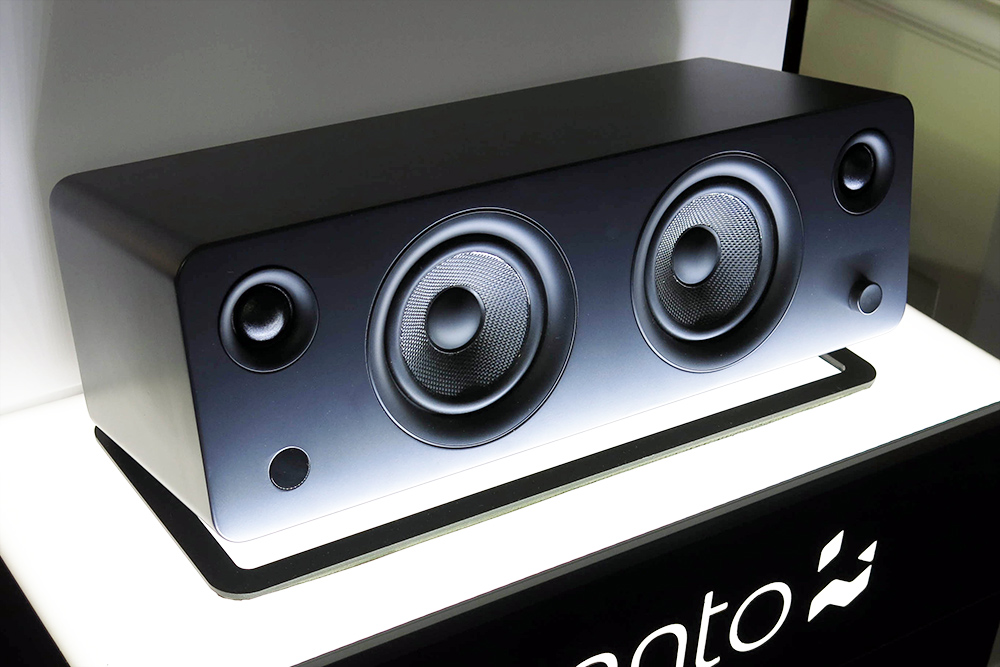 Many audiophiles hate all-in-one wireless speakers, but I think they’ll like the Kanto Syd ($299 including stand), which is basically a good-quality stereo squeezed into one box. Each channel gets a 0.75" tweeter and a 4" woofer. There’s an RCA input that can be set for line or phono sources, a TosLink optical digital input, a USB digital input, a full-range subwoofer output, and a Bluetooth receiver. Pushing on the volume control cycles through the inputs. 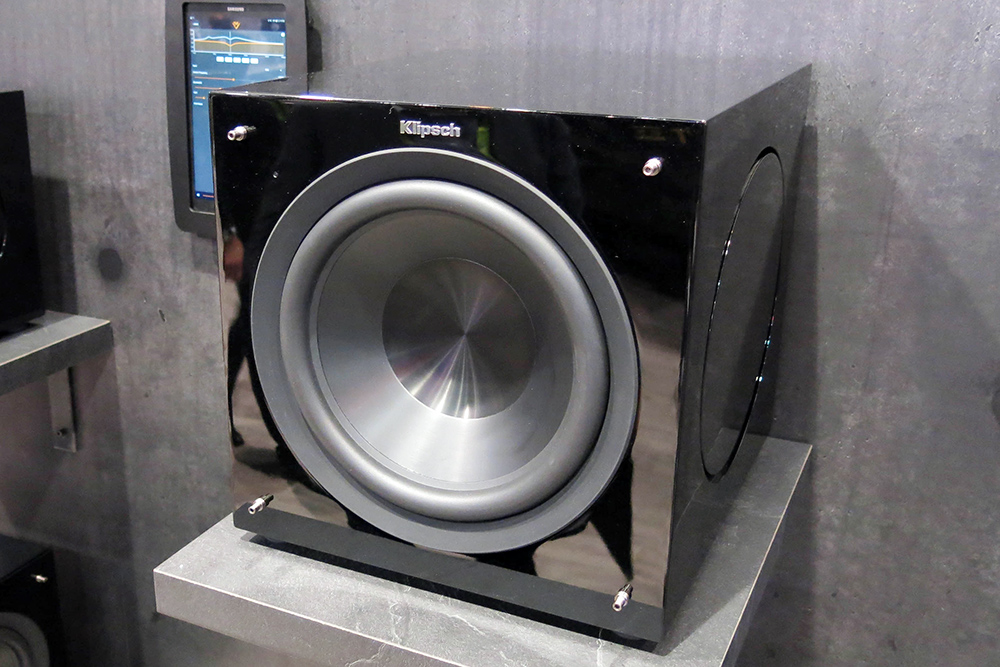 The “C” in Klipsch’s new C-Series subwoofers stands for compact, but despite their size, they’re designed to compete with the output of larger models -- and also to work better in audiophile-oriented two-channel systems. This one is the C310ASW-I ($1599), and it has one 10" active driver and two passive radiators. It has XLR and RCA line-level inputs plus speaker-level inputs and a wireless receiver, and controls that let you mix the contributions of the different inputs -- much like the input section of REL subs, which have long been popular with audiophiles. A smartphone app lets you perform automatic room EQ and also tweak the EQ to your liking. The app works with one sub or two, a feature that should ease the confusion of dual-sub calibration. 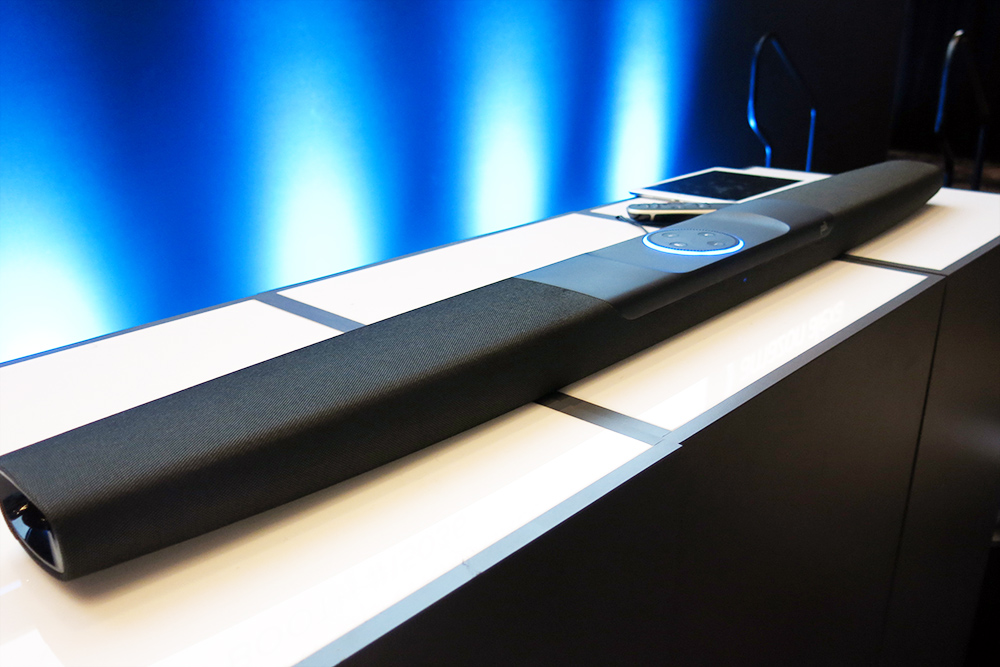 Polk’s new Command Bar soundbar ($299) commanded the most PR splash of any audio product at CES 2018, with a packed introduction at the Cosmopolitan hotel. But as the first soundbar I’ve seen with Amazon Alexa built in, it deserved the attention. The center of the bar features a microphone array and LED ring much like the one found on the Amazon Echo smartspeaker. The company said it paid particular attention to integration with Amazon Fire streaming sticks, so you can command the Command Bar to play your choice of content -- and, of course, to tell you the weather or order lunch. Inside the soundbar are two 1.25" by 3.25" midrange drivers and two 1" tweeters. A separate subwoofer packs a 6.5" driver and a 50W amp. 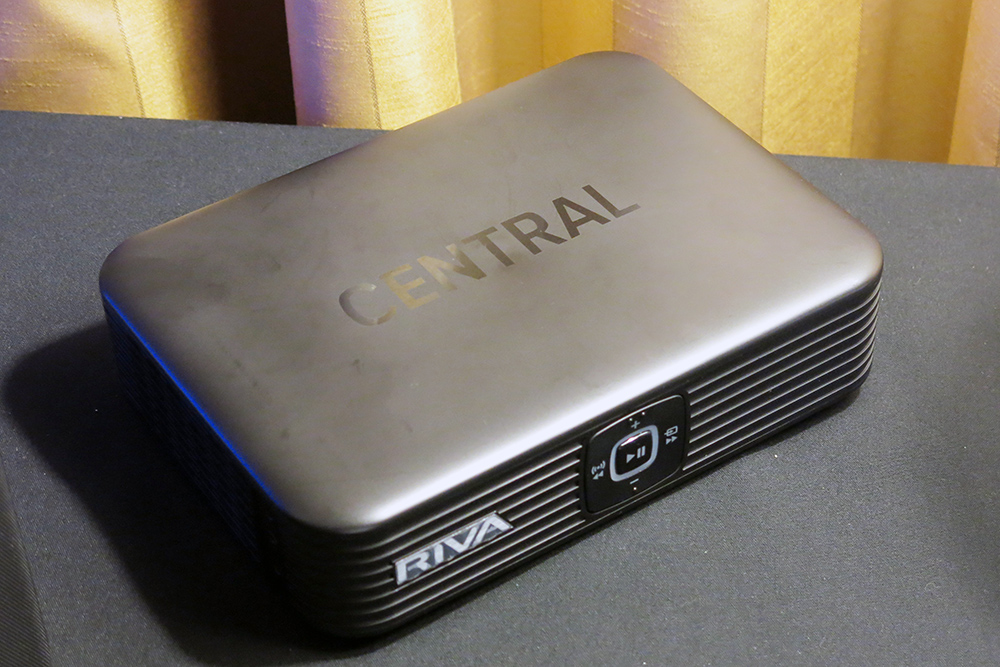 The Riva Central ($399) is a smart amp that connects to any pair of speakers so they can play streamed content and also work in a system with Riva’s Festival and Arena speakers. It incorporates a class-D amp rated at 55W into 4 ohms, and it can stream content via AirPlay, Bluetooth, and Spotify Connect. It also lets you play music from a turntable and USB sticks, and has a variable-level subwoofer line output. 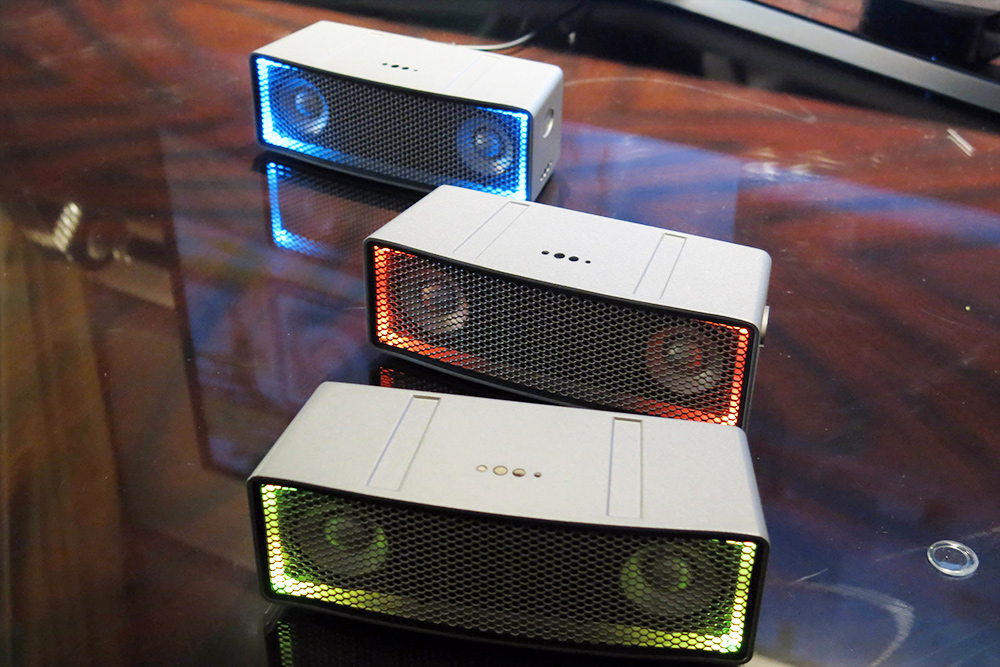 Sound Dimension’s Soundots ($290 each) is a modular portable speaker system. Infrared ports on the sides, top, and bottom of each speaker allow the speakers to share an audio signal. Place them atop or alongside each other, and they link up and play together, using the company’s proprietary technology to optimize each speaker’s performance for its position in the array. So, for example, you could line up three of them and make a soundbar. The company demoed a setup showing about 30 Soundots in three adjacent stacks, all playing the same material in sync. Each Soundots has Bluetooth along with 3.5mm analog and TosLink optical digital inputs. An app lets you change the color of the lights or turn them off. 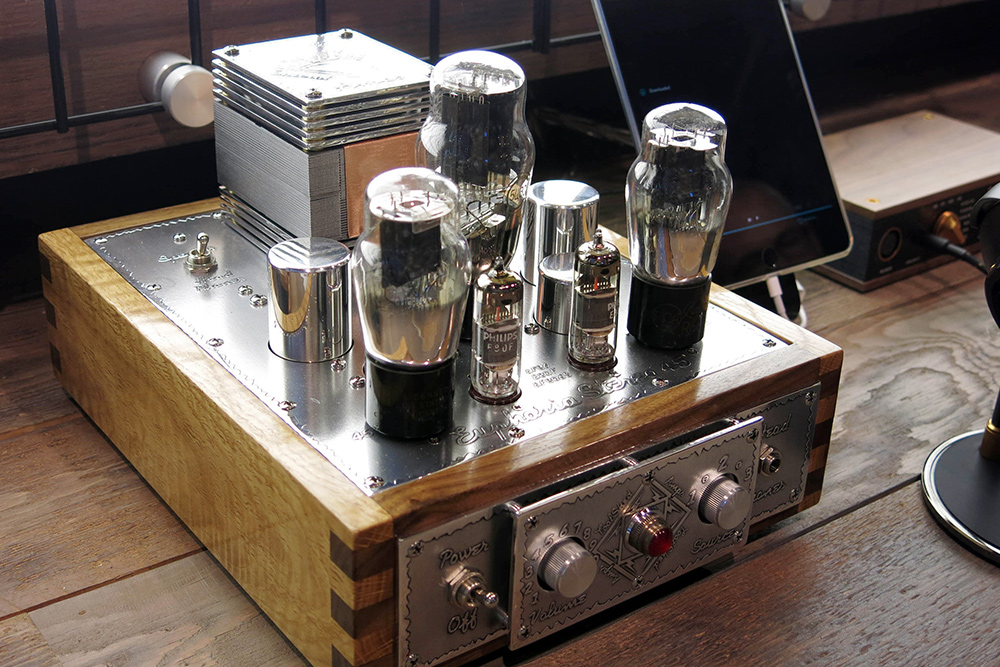 I was delightfully surprised to see this beauty in the Klipsch booth, but even though it sat among the company’s headphones, and even though it does have a headphone jack, it’s actually an integrated amp designed to drive Klipsch’s Heritage Series horn speakers. The ToolShed Euphoria Stereo 45 DHT ($3495) puts out just 2.5Wpc into 8 ohms, but that’s enough to drive those super-efficient horn speakers to loud volumes. It’s a single-ended, direct-heated triode design. This one has a commemorative Klipsch logo graphic stamped into the top panel of the transformer cover. 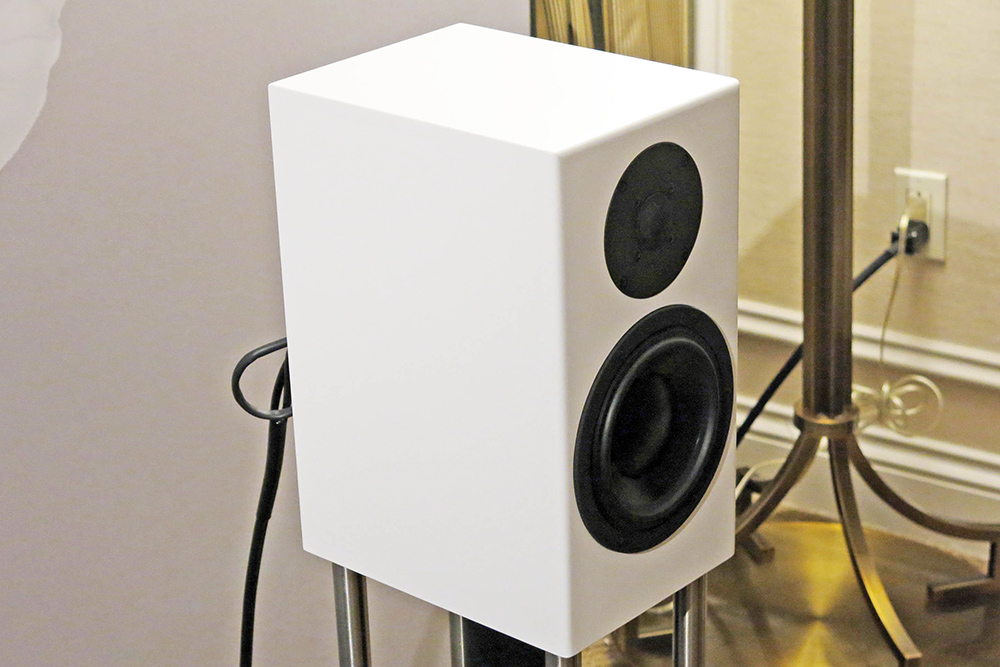 Totem Acoustic’s Signature One ($2650/pair), created to commemorate the company’s 30th anniversary, sort of combines the most loved characteristics of two previous, similarly sized models. “The Sky [bookshelf speaker] has sold very well for us,” Totem’s Vince Bruzzese told me, “but some people told us they missed the character of our Model One. So for the Signature One, we struck a balance between the two.” The Signature One has a 6.5" woofer with a beefy 3" voice coil, crossed over to a 1" tweeter. Paired with Simaudio Moon electronics and Transparent cabling, the modestly sized speakers kicked out a powerful, well-balanced sound.