Is there any product genre that has more diverse offerings than loudspeakers? Florida Audio Expo 2020 saw a dizzying array of models of all configurations, sizes, and shapes -- and at all price points. And as you’ll see in the first entry in this installment of our coverage, you can even get them in all stages of manufacture. (All prices are in US dollars.) 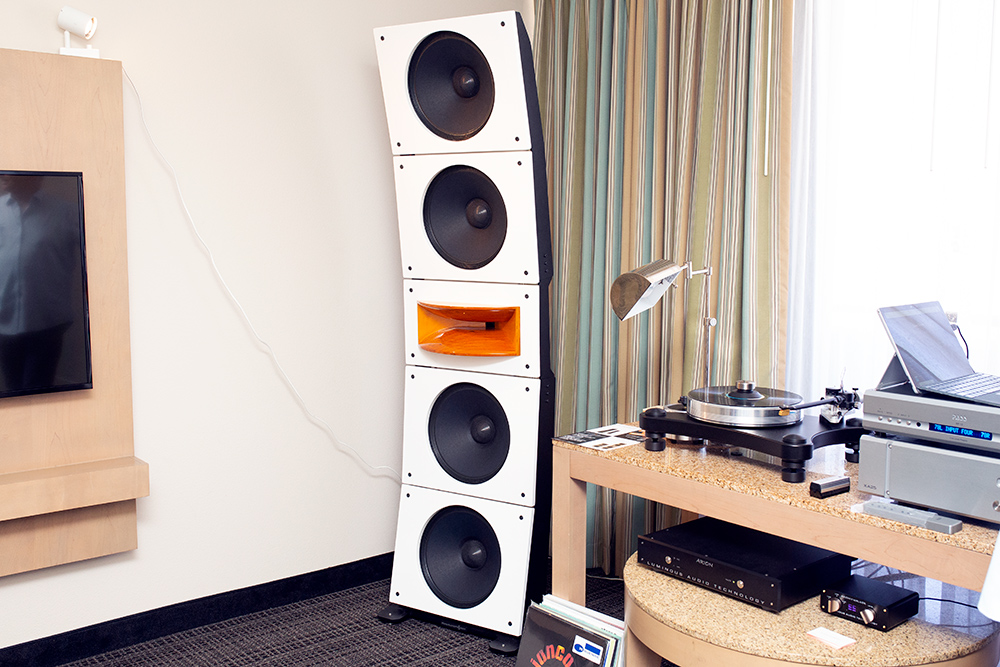 The PureAudioProject Quintet15 Horn1 loudspeaker is a modular, aluminum-frame, open-baffle design that is best described as a multinational affair, due to the countries of origin of the various parts that combine to make it up. The Quintet15 Horn1 is sold as a kit, and you can order it with either two woofers per channel or four, as shown. The horn is made in Europe, and it houses a 1.4" polymer-dome tweeter. The woofers are made in the United States and are mounted on baffles that can be ordered in a number of finishes. The passive crossover components are made in Germany by Mundorf, though there’s an option for an electronic active crossover at additional cost. The kit can be ordered in single-wire or biwire configuration. The price as seen is $10,000/pair. 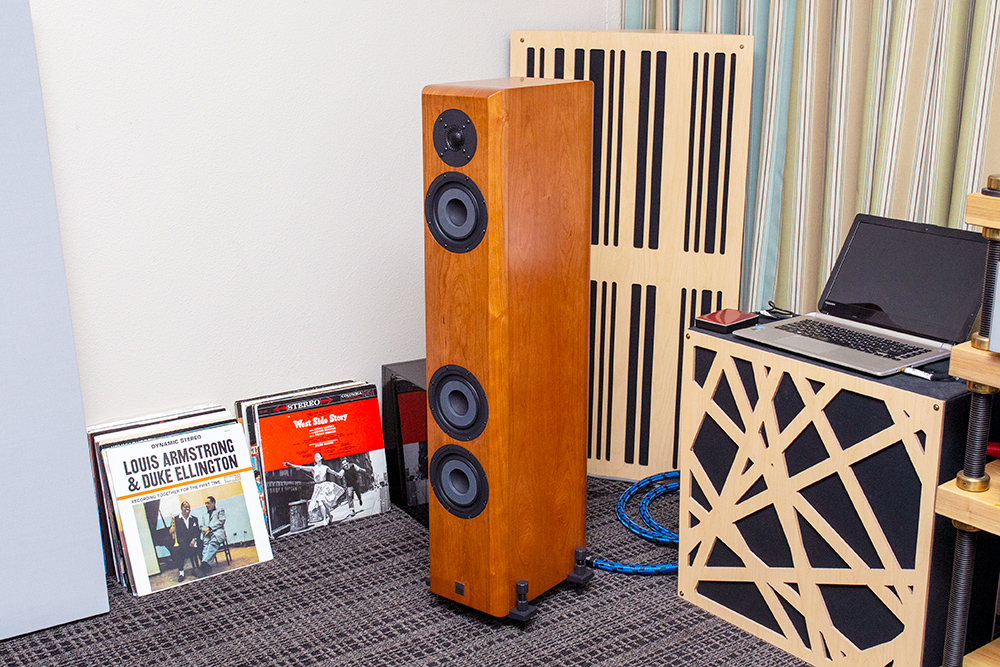 The new three-way Vienna Acoustics Beethoven Baby Grand Reference loudspeaker, shown above in Cherry finish, is said to house much of the driver technology of the pricier Vienna Acoustics Liszt models. The . . . 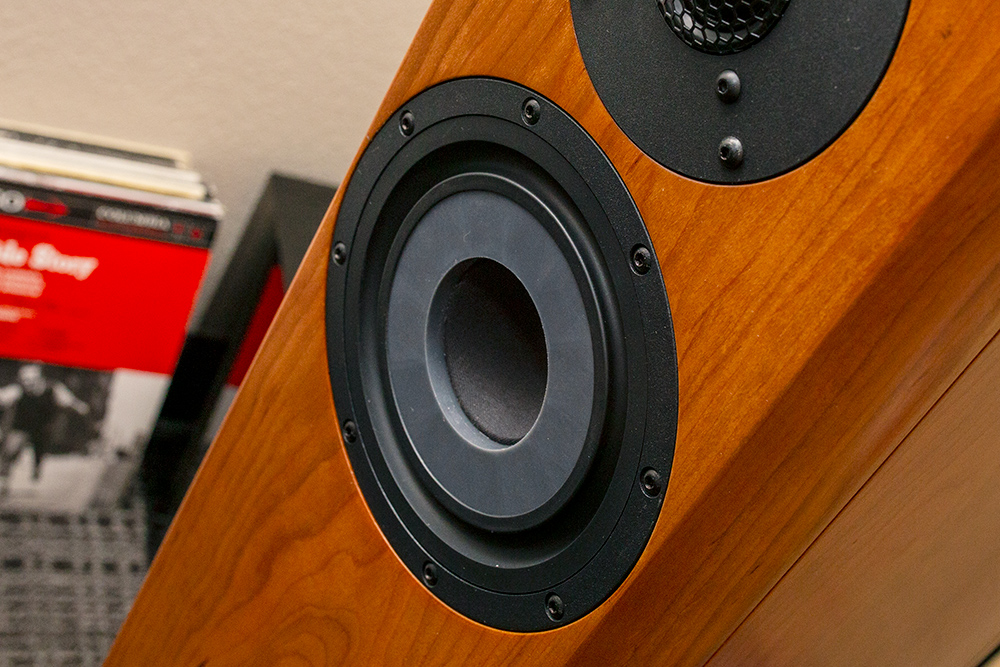 . . . Spidercone driver diaphragms in the midrange and woofers are made from what Vienna Acoustics calls the X4P mixture. The cones’ construction is said to result in purely pistonic operation when married to the large voice coils powering them. Several finishes are available: Premium Rosewood, Cherry, Piano Black, and Piano White. The price of the Beethoven Baby Grand Reference is $9498/pair. 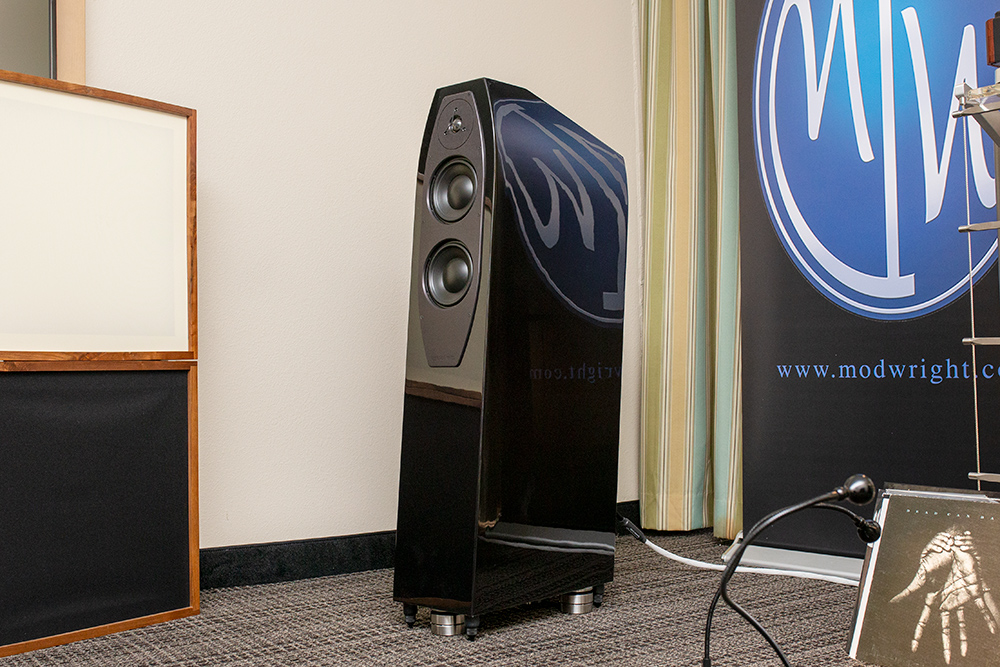 The EgglestonWorks Oso floorstanding loudspeaker made its debut in Florida, dressed in a sleek and shiny black finish. This new model tops out the company’s Artisan line -- it comes in above the Emma and Nico, and it features two 6" midranges, a 1" soft-dome tweeter, and a . . . 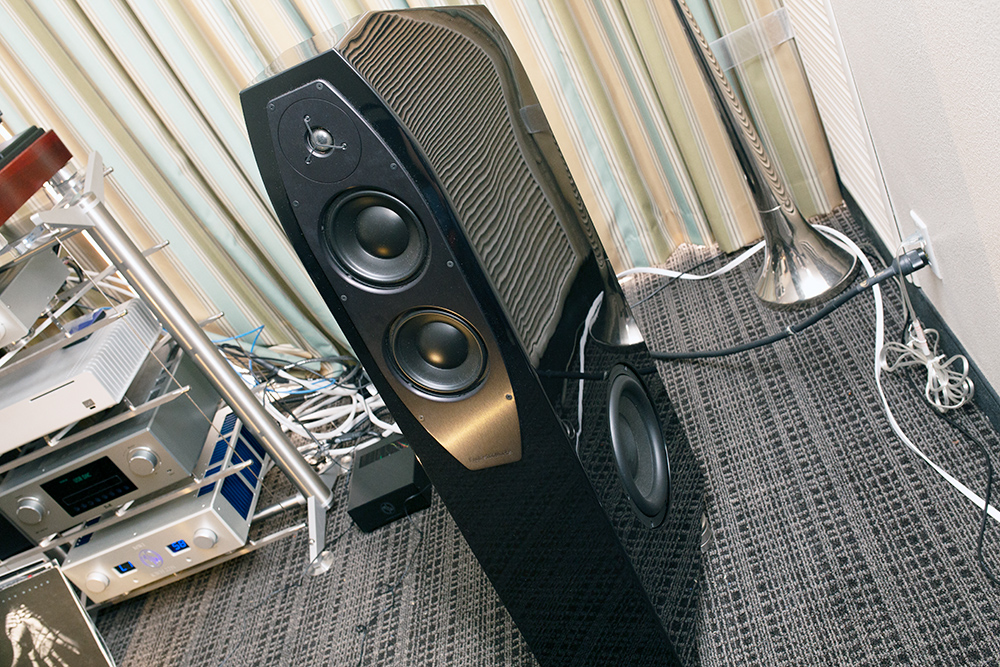 . . . 10" side-firing woofer in a slot-ported sub-enclosure -- a porting system trickled down from the Kiva and Viginti loudspeakers. The price is $11,995/pair, and the available finishes are plentiful (pretty much any painted color you can imagine). 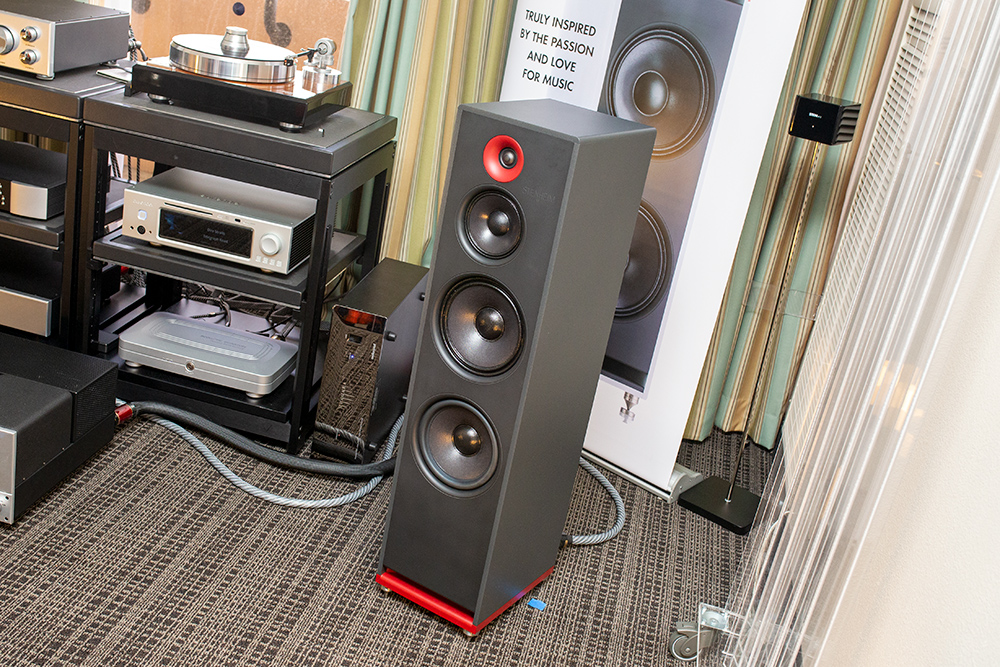 The Stenheim Alumine Three is a three-way, four-driver floorstander with an all-aluminum cabinet. It’s priced at $29,000 per pair. The driver complement, housed in three separate compartments within the cabinet, consists of two 8" woofers, a single 5.25" midrange, and a 1" tweeter in a mini-waveguide. The Swiss-made speaker has a front-firing laminar flow port down near the bottom. The Three is rated to play from 32Hz to 35kHz and is claimed to have a 93dB sensitivity. It’s available in a light-gray finish or the dark gray you see in the photo. The . . . 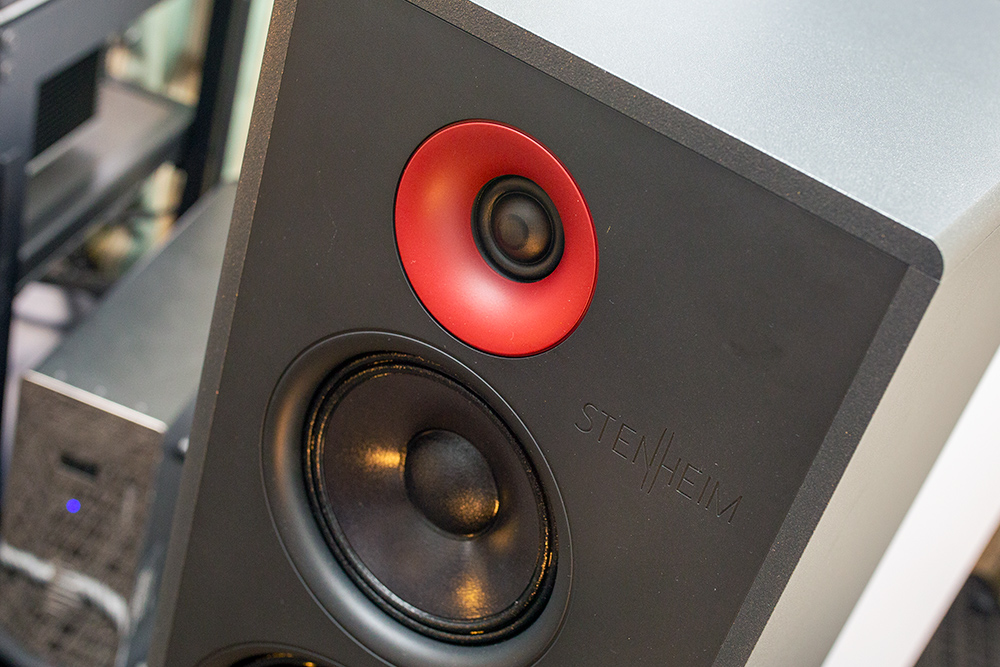 . . . red portions around the tweeter and at the bottom of the speaker shown in the photos above can be substituted for black at time of order. 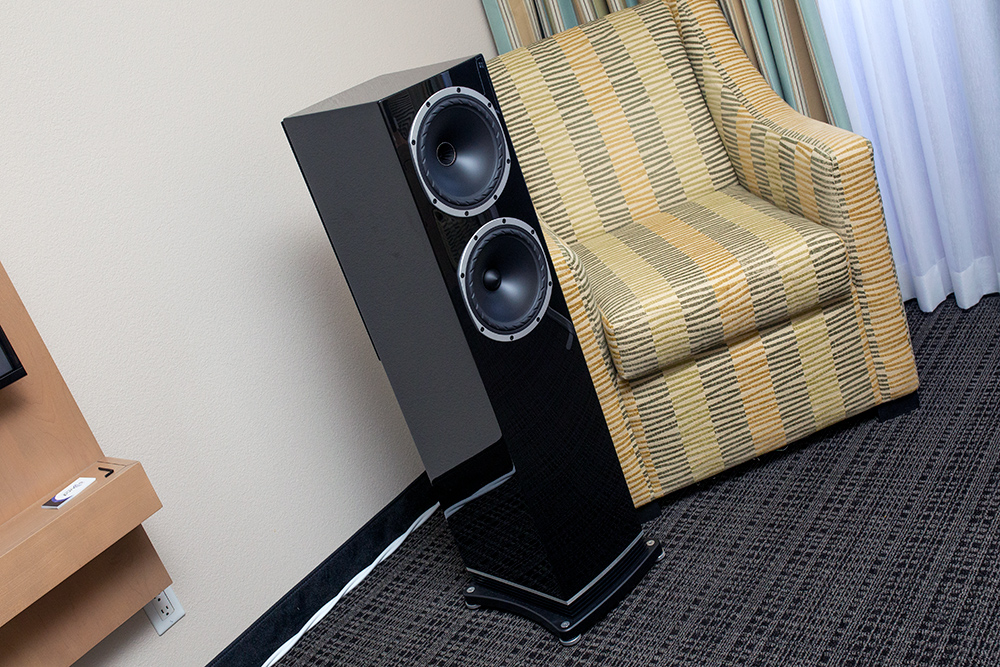 The Fyne Audio F502 is a 2.5-way floorstanding design that garnered quite a bit of attention at FAE 2020 due to the super affordable price for the apparent excellent build quality and sonic performance on offer. In fact, one showgoer listening while we were gathering details for our show report said the F502 was “by far the best value at the show.” The F502 is priced at $2495 in wood finish, and it rises to $2845 per pair in the premium painted finish seen. The drivers are 8" in diameter. The . . . 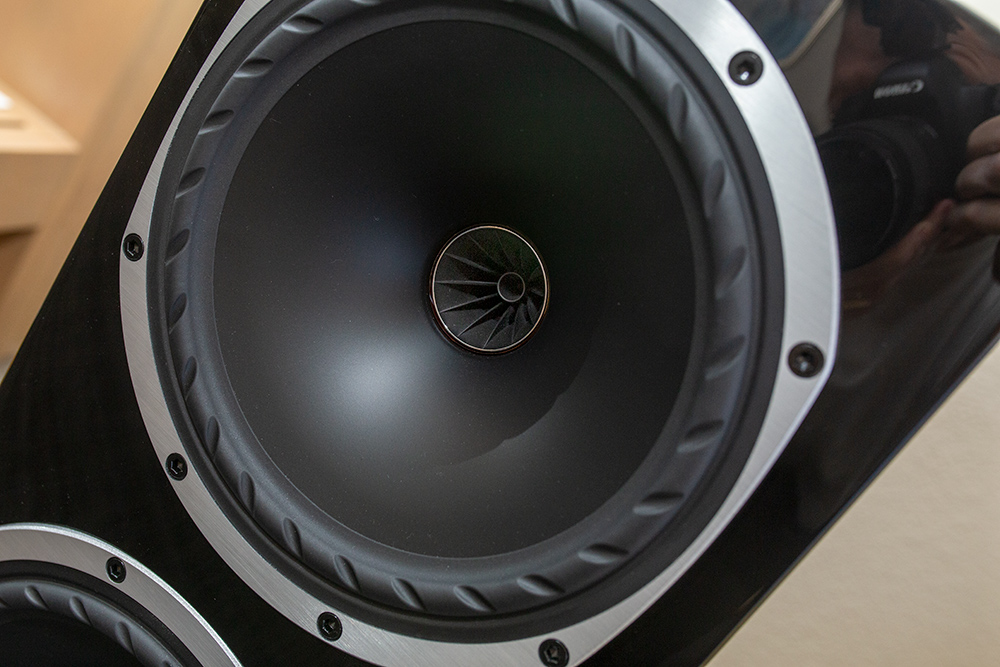 . . . topmost driver, which uses the company’s IsoFlare technology, is a point-source design with a tweeter mounted in the midrange’s center. The bottom driver is a dedicated woofer. Both have corrugated surrounds, likely to improve excursion and lower distortion. The Basstrax porting routes the airflow down toward the bottom of the speaker, where there are vents that disperse the low frequencies 360 degrees around the speaker, which the company says allows for easier positioning in a room. One other cool feature is . . . 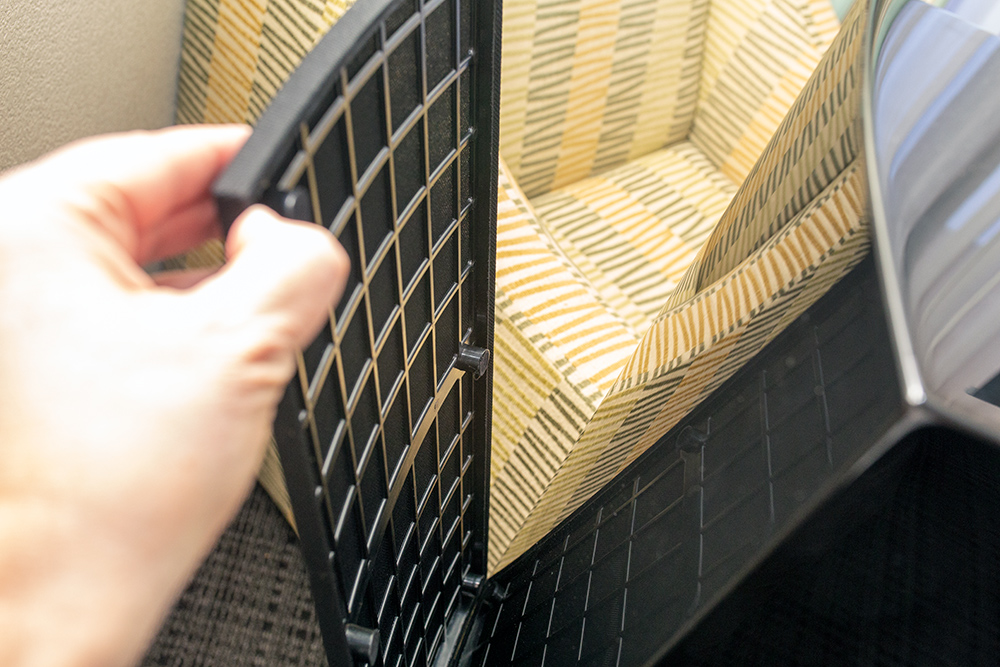 . . . that the magnetically attached grilles can be stored on the back of the speaker -- there are magnets in the cabinet back there just for that reason. What a great storage idea for grilles that can typically get lost or in the way. 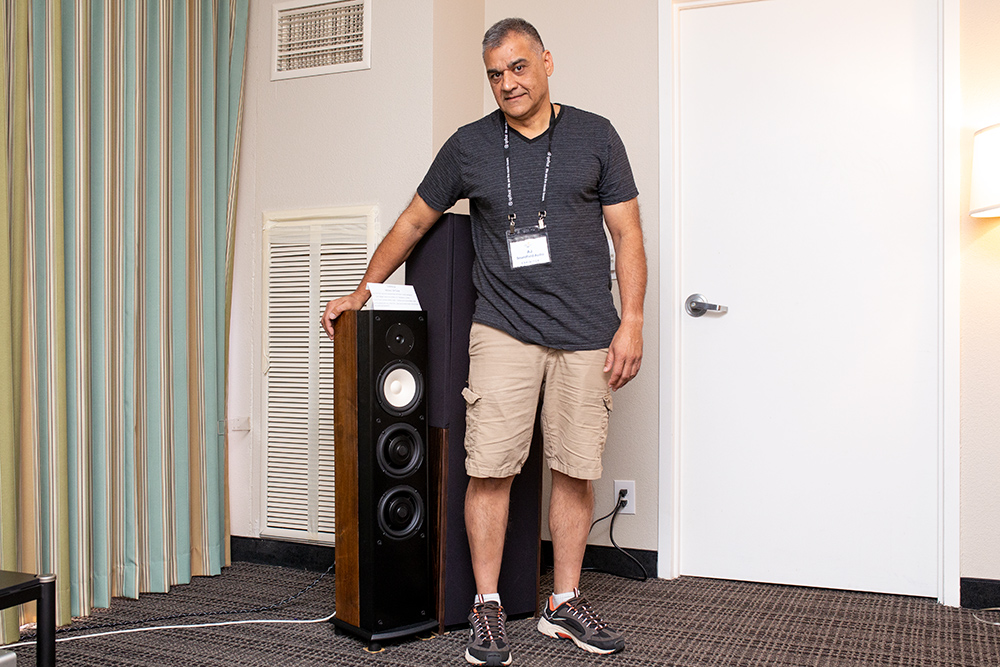 Soundfield’s Ammar Jadusingh is standing beside the WT1Ad loudspeaker ($3800/pair), an incredibly complex, fully active compact floorstander said to radiate sound in a cardioid pattern from 60 to about 700Hz. Four channels of amplification are . . . 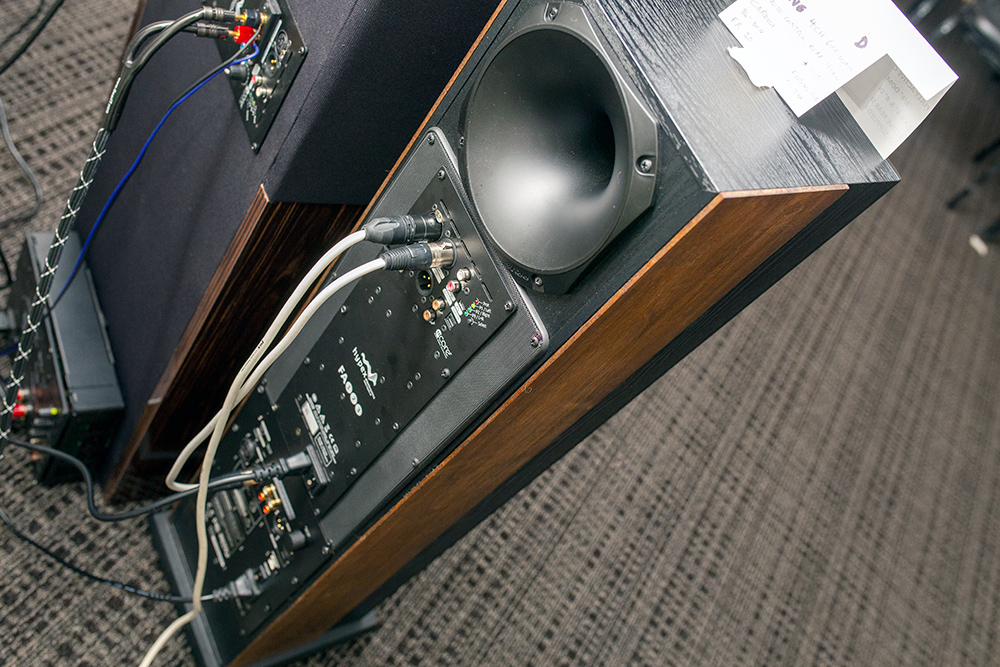 . . . onboard (two mono amplifiers and one stereo amplifier, actually). The main drive units include a 0.75" soft-dome tweeter driven by 100W, a 6.5" midbass driven by 125W, and two 6.5" woofers and an 8" downfiring subwoofer, all driven by 250W. There is also a rear-firing ambience tweeter driven by 125W. Bass and ambience levels are adjustable via a supplied remote control. According to Ammar, he designs speakers in a very measurement-based way, focusing mostly on the relationship between the on- and off-axis frequency responses, particularly on the horizontal plane. We had a listen to the pair and found them very neutral throughout the audioband with a silky-smoothness at the top end. The bass, too, impressed -- it was deep, with terrific impact.