Munich’s High End still reigns supreme as the world’s largest and most important hi-fi show, which is why we love it. One problem its size poses, however, is that it’s next to impossible for our team to cover every product presented during the show’s four-day run. I doubt we’ll achieve 100% coverage of the show this year, either -- but that doesn’t mean we can’t do better than in the past.

To help expand our coverage this year, I started gathering new-product information before the show so I could hit the ground running at 9 a.m. on May 9 -- the moment High End 2019 opened. The first things I went for when I got through the doors were the new loudspeakers I already knew would be there, which are the focus of this report. All prices are in euros (€) or US dollars ($). 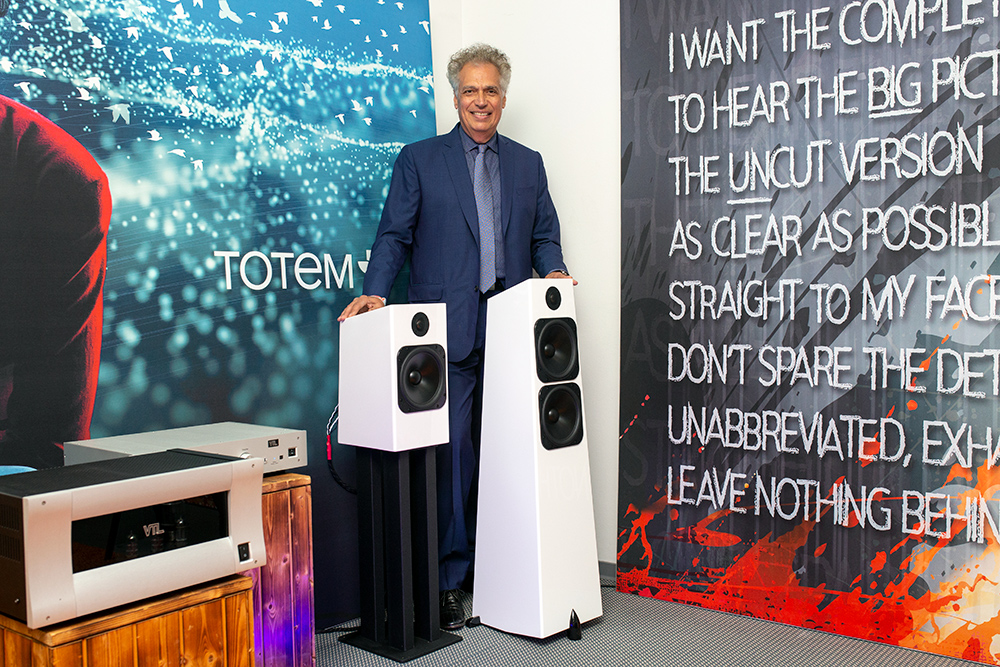 Canada’s Totem Acoustic used High End 2019 to debut its Element-series Fire V2 bookshelf and Metal V2 floorstanding loudspeakers, but this wasn’t the first time I saw them. I was fortunate enough to see prototypes of the two models on a trip I took to Totem Acoustic a few weeks ago. At that time, it was obvious that Vince Bruzzese, the company’s founder and chief designer, was super jazzed about both new versions, but he seemed particularly thrilled with the way the Fire V2 turned out, saying that he felt it could compete handily with any stand-mounted two-way of any price. A bold statement. 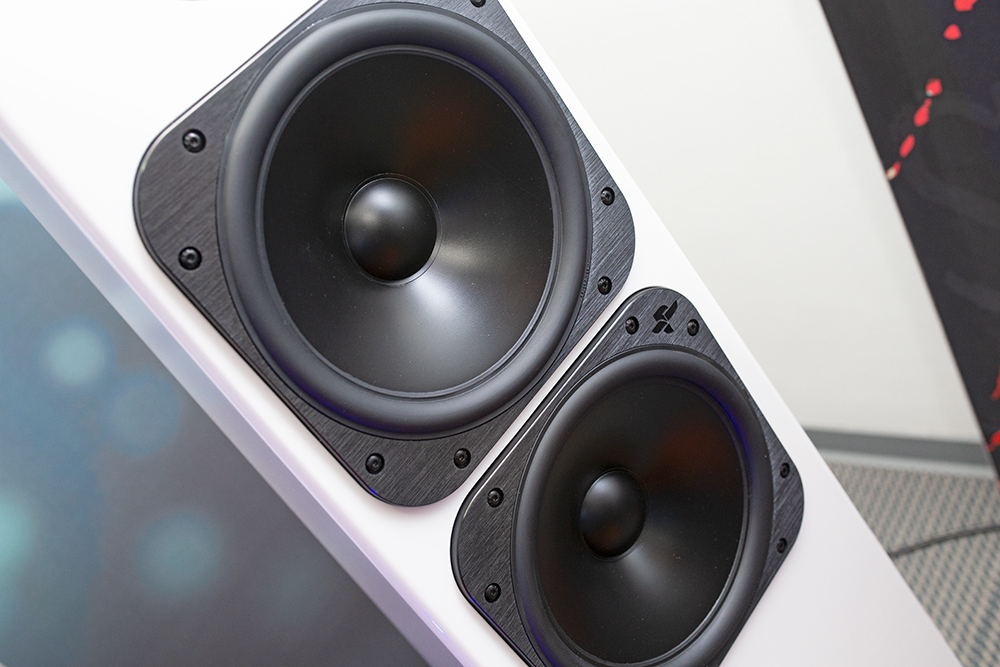 Cosmetically, the V2 models’ cabinets remain the same as their predecessors’, as do their tweeters. The high-gloss black or white colors they come in are also the same. They’re also both still two-ways. The changes are in the 7" Torrent-technology midrange-woofer used in both -- the Metal having two of them, the Fire having only one -- as well as in their crossovers. Insofar as the midrange-woofer goes, physical changes include a larger dust cap, increased damping on the rear of the cone, an extra magnet in the motor system (for a total of 17), black instead of silver anodizing on the “Skid Plate” that surrounds the drivers, and a shorter frame. The Element Fire V2 and Metal V2 are respectively priced at $7000 and $17,000 per pair and are available now. 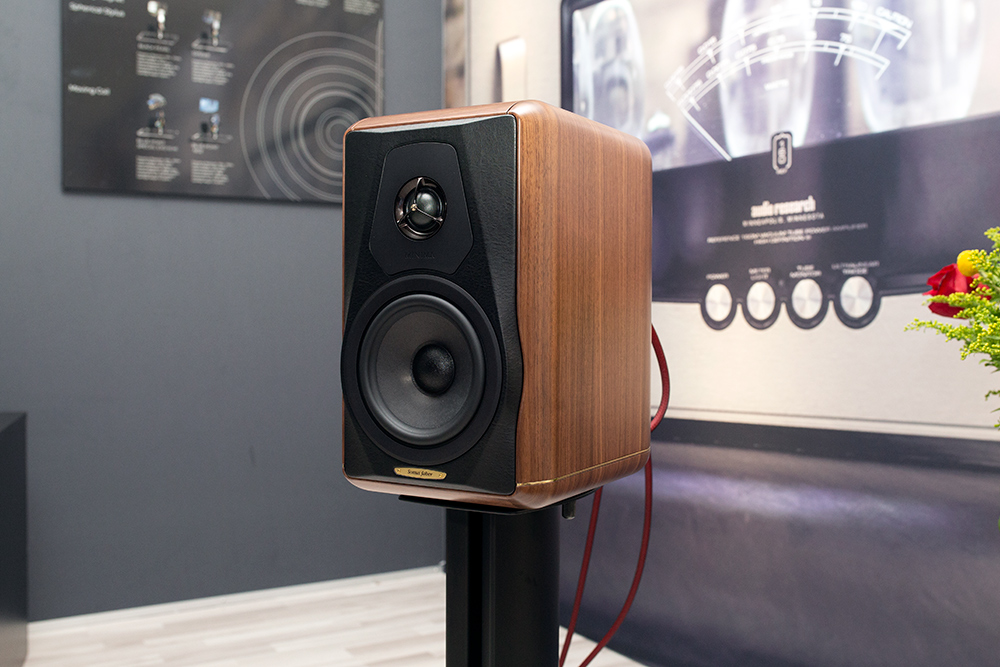 Italy’s Sonus Faber began its Heritage Collection lineup with the launch of the Electa Amator III loudspeaker at Rocky Mountain Audio Fest 2018, held last October. Now the company is expanding the line with the release of the Minima Amator II loudspeaker, priced at €4000/pair, which is obviously based on its original Minima, released in 1992. “The success of Electa Amator III confirms that our customers love our history, as we do,” said Sonus Faber’s chief industrial designer, Livio Cucuzza, who worked on both speakers (and every SF model for almost ten years now). “Our roots and the people who contribute to make us great deserve to be celebrated once again.” 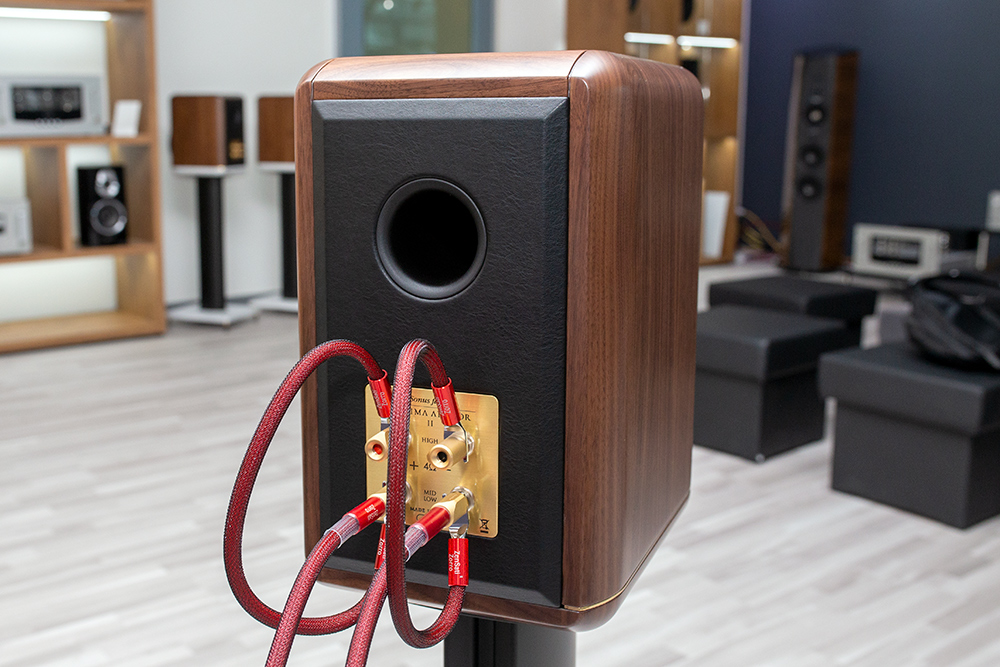 The Minima Amator II is a two-driver, two-way design that has a 1.1" silk-dome tweeter, replete with the company’s Damped Apex Dome technology, and a 6" woofer, which has a diecast aluminum basket and a cone made from pulp and natural fibers. The drivers are crossed over using Sonus Faber’s Paracross topology, which works by having an initially slow rolloff for each driver, for optimum phase integrity, then a steeper rolloff when the drivers’ outputs are much lower in level. Beautiful woodwork and leather accents are earmarks of the Sonus Faber brand -- and certainly aren’t left out here. The Minima Amator II’s cabinet is made from gorgeously finished solid walnut, and there’s leather on the cabinet’s front and rear. The backside also has brass binding posts. 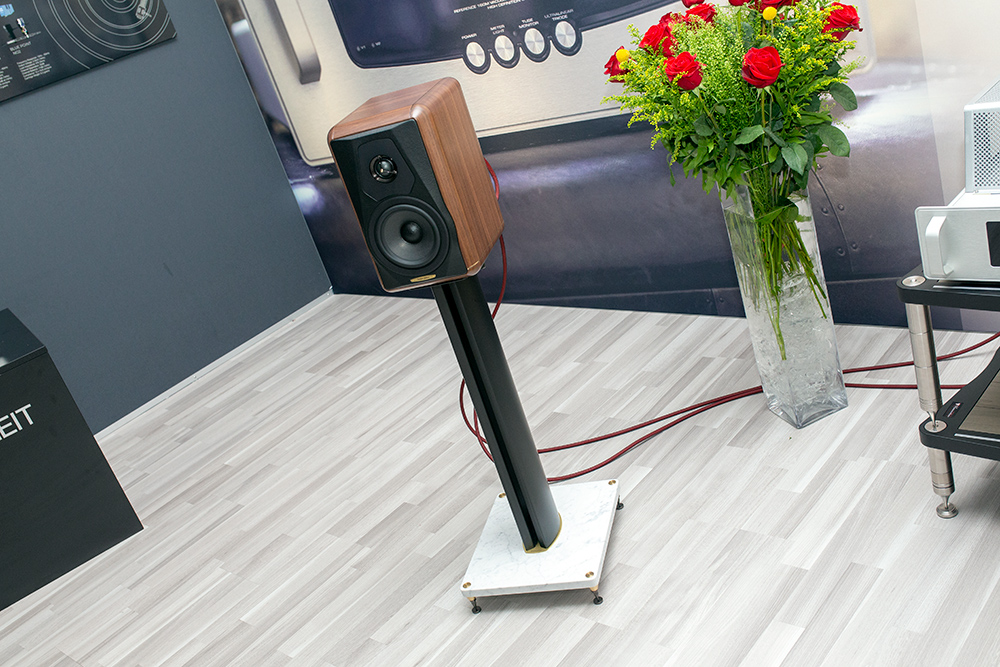 The Minima Amator II’s price does not include stands, because the speakers are small enough to use on a bookshelf, but they can obviously be used on them. It fits on the Electa Amator III’s stand, which the company used to display the speakers at High End, and on the Unicum stand, which is all black. The Minima Amator II’s availability is slated for June in Europe and July in North America. 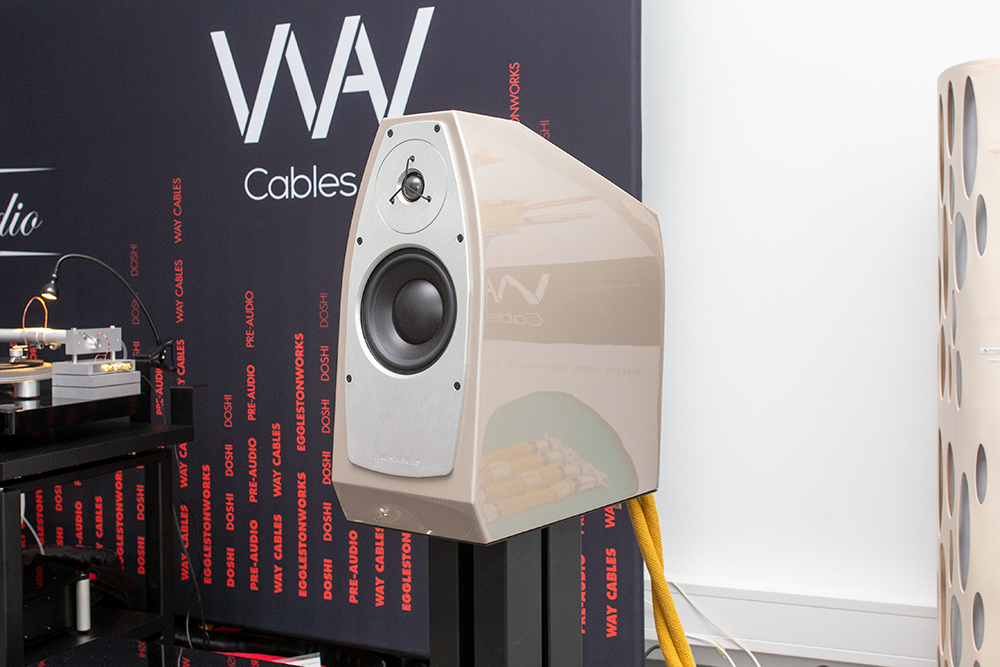 The United States’ EgglestonWorks has been on a tear lately. It released the Kiva floorstander (€16,990 per pair) at last year’s High End show and then the Emma EVO floorstander (€6500 per pair) at Rocky Mountain Audio Fest 2018. Its newest and least expensive speaker is the stand-mounted Nico EVO (€4900 per pair), the replacement to the original Nico, which was released in 2014. Jim Thompson, the company’s president, calls this trio the “new guard.” 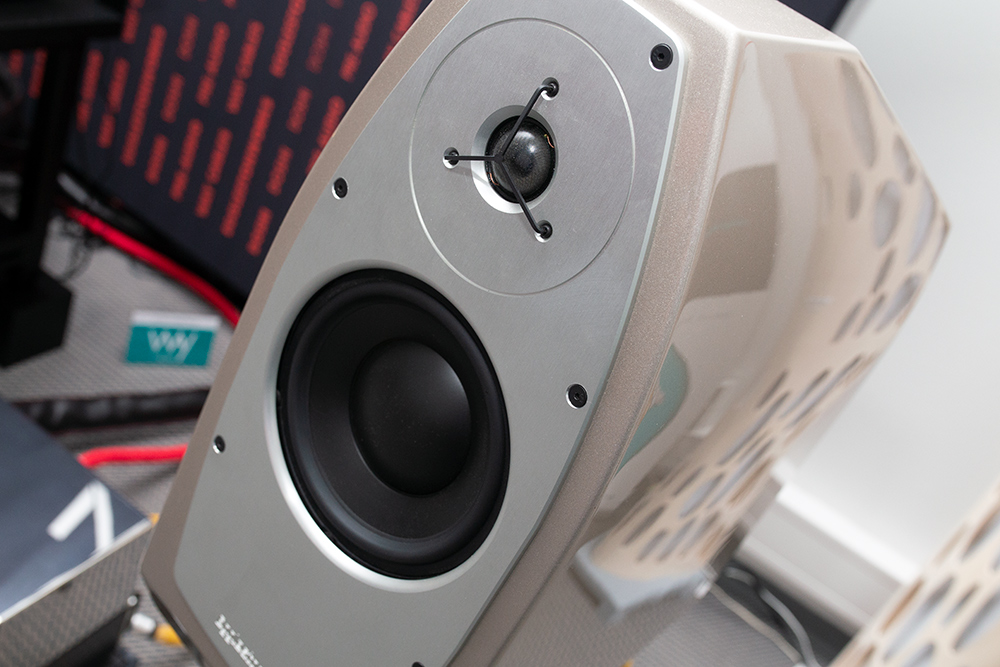 The Nico EVO is a two-way design with a 1" tweeter and a 6" midrange-woofer; both drivers look the same as the ones used in the Emma EVO. The Nico EVO also includes the company’s special . . .

. . . slotted port that first arrived a few models ago. Like all of EgglestonWorks’ other speakers, the Nico EVO’s cabinet is made entirely of MDF that can be finished in high-gloss paint (the company uses an automotive finish, so the color selection is almost limitless). The Nico EVO, like the Kiva and Emma EVO, has an aluminum plate on the front baffle that surrounds the tweeter and conceals the midrange-woofer’s frame. The Nico EVO is available right now; in fact, a pair are on their way to Hans Wetzel for review.

For four years going, we’ve watched AudioSolutions, from Vilnius, Lithuania, use High End to debut a new speaker or speaker line. This year the company showed the new Virtuoso M, a shapely, attractive three-way floorstander with two 7.5" woofers, one 6.5" midrange driver, and one 1.2" tweeter. Its tweeter is placed under the midrange but above the woofers. It’s the first speaker in the new Virtuoso series, which slots above the Figaro line that debuted at last year’s High End, and below the Vantage 5th Anniversary line, shown two years ago.

Priced at €25,000 per pair, the Virtuoso M features the company’s “box in a box” cabinet construction, which first showed up in the Figaro line. Basically, there’s an outer enclosure encasing a complete inner enclosure, which the company says makes the enclosure at least ten times stiffer. Also distinctive is that the M’s midrange driver covers an unusually wide range, from 500Hz to 7000Hz. It’s implemented at the expense of some higher-frequency dispersion from the midrange, but done so that the single driver covers the frequencies where human hearing is most critical. For fine-tuning to the room, the Virtuoso comes with . . . 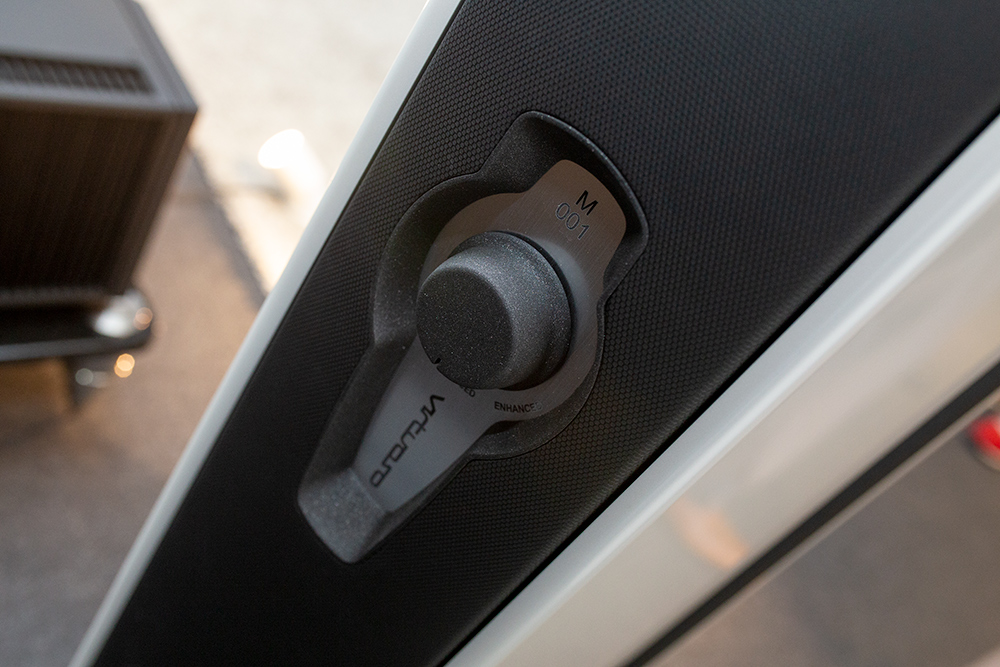 . . . user-selectable crossover profiles -- Balanced, Softened, and Enhanced -- which are said to affect the overall frequency response in subtle ways. Finally, as with the Figaro models, numerous finish options are available, but here they’ve stepped things up. There are seven standard high-gloss finishes and six metallic high-gloss finishes, including one they call Flame Chameleon, which, according to the M’s press release, “changes from cold grey to all temperatures of flame/spark (from cold blue up to warm red).” I can’t say we’ve seen that before! 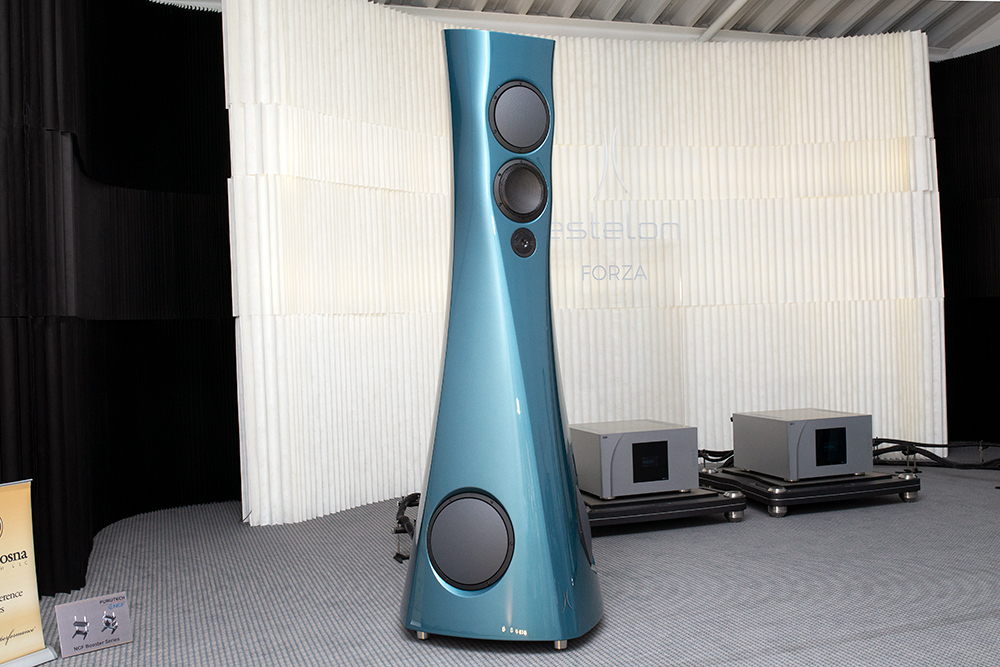 The final speaker in this report comes from Estonia and is the most expensive: Estelon’s Forza, priced at €110,000 per pair. The word forza translates several ways, but the company prefers the Italian meaning: power. Indeed, the Forzas sounded powerful, as well as exceptionally smooth and refined, when I briefly heard them in an early-morning demo, where CH Precision M1.1 mono amps drove them. Where does all this size and refinement come from? A lot of it boils down to size and the choice of parts . . .

This 66"-tall, 330-pound loudspeaker is a four-way design that uses all-Accuton drivers: one 1" CELL diamond tweeter, one 6.6" CELL ceramic midrange, one 7.5" CELL aluminum-sandwich midrange-woofer, and two 9.8" CELL aluminum-sandwich woofers. Its frequency response is rated from 25Hz to a very high 60kHz, no doubt because of the diamond diaphragm on the tweeter, which is said to have a higher (and less audible) natural resonance frequency well above that of typical metal-dome tweeters. The Forza’s rated sensitivity is also high at 90dB (2.83V/m), but its impedance is a little low -- a nominal 3-ohm load, with 2-ohm minimums at 42 and 110Hz. As a result, it’ll need a pretty stout solid-state amplifier that’s stable into low impedances -- tube amps probably shouldn’t apply. The Forza’s gorgeously shaped cabinet is made in Estonia, the country they are based in, from a marble-based composite that comes in three finishes: Black Pearl Gloss, White Pearl Gloss, and Black Matte (the blue-colored pair shown at High End were made only for this show). 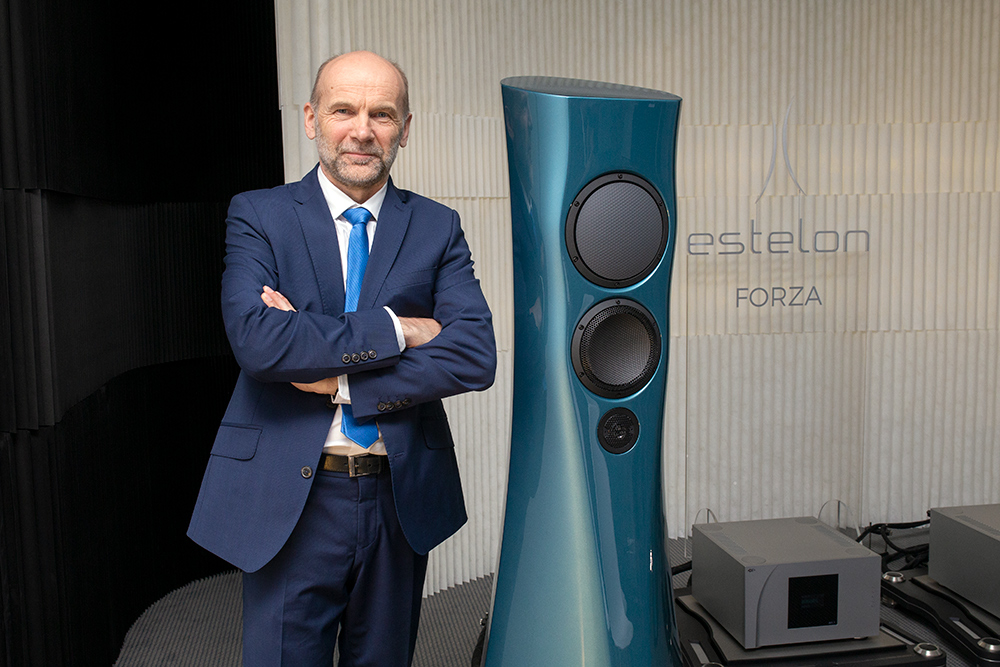 While visiting the room, I could see that Alfred Vassilkov, the company’s cofounder and chief designer, was extremely proud of what he created. He’s a quiet and reserved man, but he was brimming with delight, so I asked him to sum up his feelings on his new baby. “I am extremely excited to present the Forza,” he said. “This speaker represents everything that Estelon stands for. It not only brings goosebumps to your skin; it wakes your every emotion.” I encourage you to check out a pair of Forzas and see if you agree -- sonically and visually, they may bowl you over, which is what they did to me.