The last installment of our High End 2019 coverage focuses on power conditioners, speaker cables, connectors, and accessories -- the things that can help jazz-up a hi-fi system and bring out its best. All prices are in euros (€) or US dollars ($). 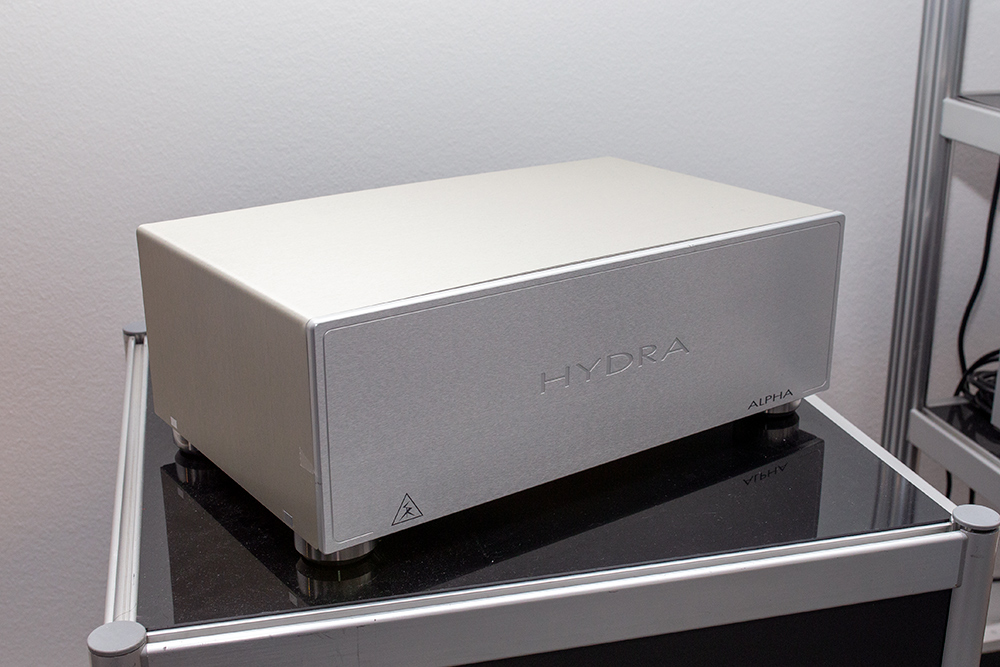 Shunyata Research released two new power conditioners at High End 2019, which are basically less costly descendants of the company’s popular Denali line. The Hydra Alpha A12 ($3500) is the larger of the two, and it includes 12 outlets. The A12 features two of the three noise-reduction technologies in the Denali line: the first is CCI, which is a component-to-component interference filter. The second is the NIC, or noise isolation chamber. Also available is . . . 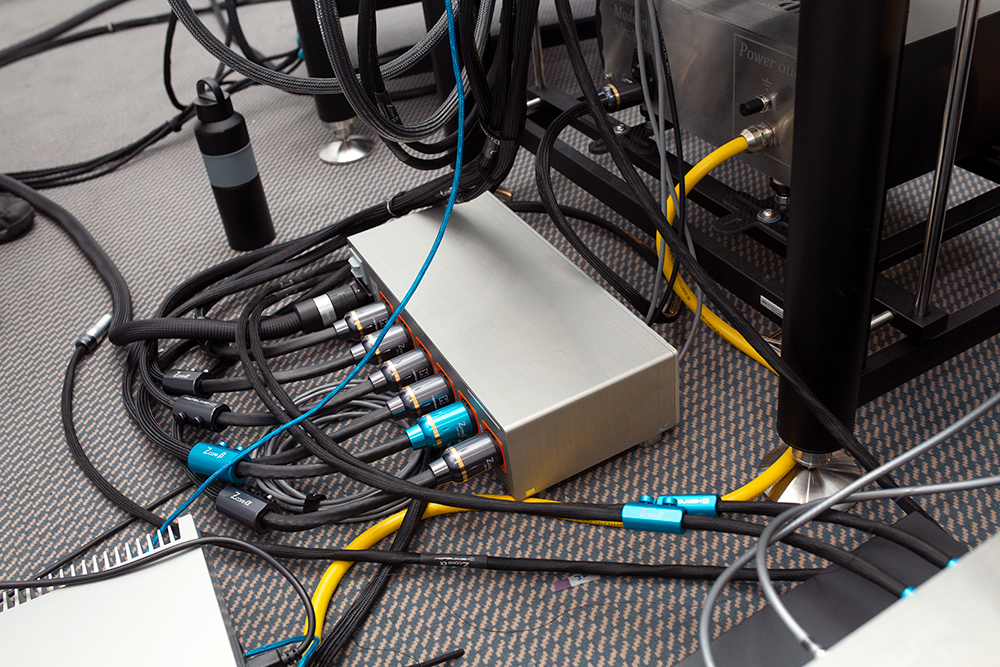 . . . a six-outlet version, the Hydra Delta D6 ($2000), which was being used to the max in the EMM Labs / Lansche Audio room. According to Brandon Lauer, Shunyata’s international sales manager, these two new power conditioners provide much of the performance of the Denali products at a much lower cost. Both products will be available at the end of June. 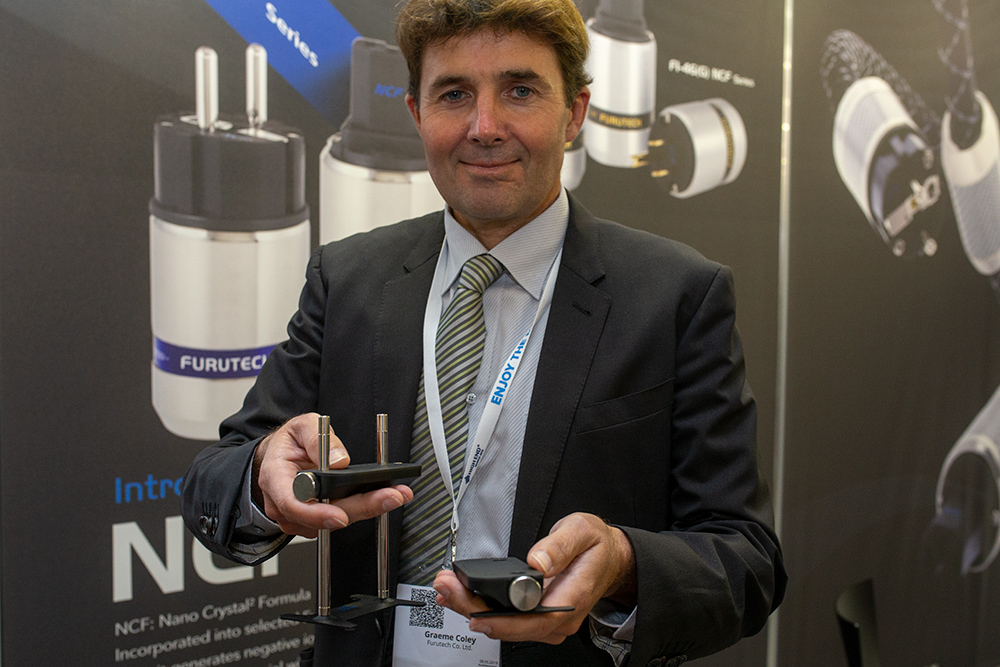 Furutech, which hails from Japan, first introduced the NCF Booster (€349), then the NCF Booster-Signal (€199), and now it has the Booster-Signal-L (€149). The L means “low” -- as in it not being as tall as the others. They’re all cable lifters, designed to prop up power cords and signal cables (i.e., interconnects and speaker wires) off the floor. What’s more, all three models use a proprietary compound that Furutech calls NCF, which is described as “a special crystalline material that has two ‘active’ properties. First, it generates negative ions that eliminate static. Second, it converts thermal energy into far infrared. Furutech combines this remarkable material with nano-sized ceramic particles and carbon powder for their additional piezoelectric damping properties. The resulting Nano Crystal² Formula, exclusive to Furutech, is the ultimate electrical and mechanical damping material.”

Furutech had the new Booster-Signal-L and the other lifters in about 15 systems at High End, but the picture you see was snapped at the company’s booth (Furutech’s Graeme Coley is holding two) with the wide assortment of connectors that the brand is well known for. In fact . . . 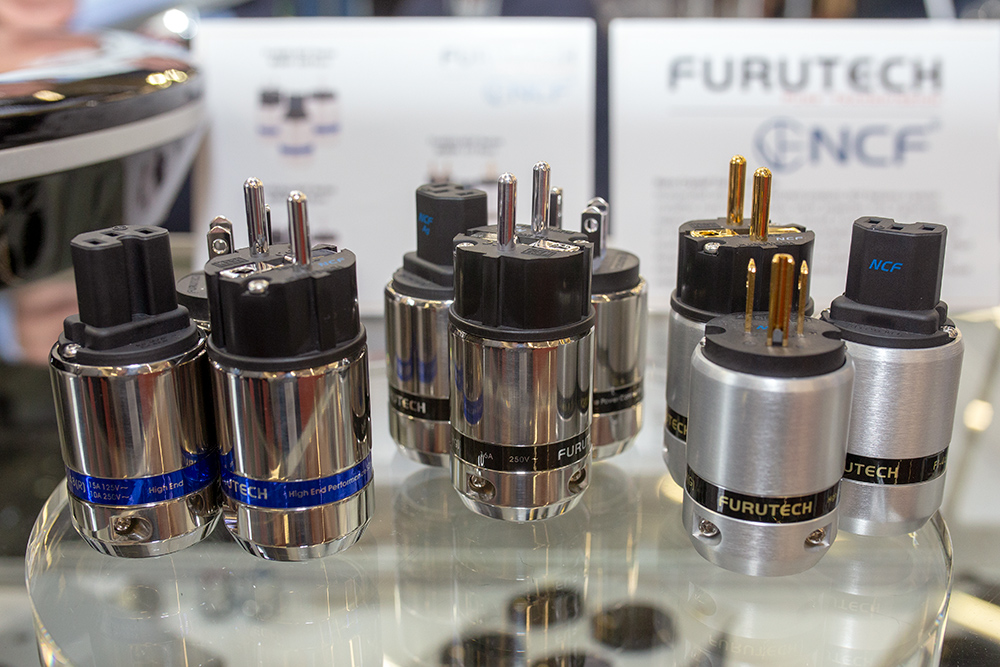 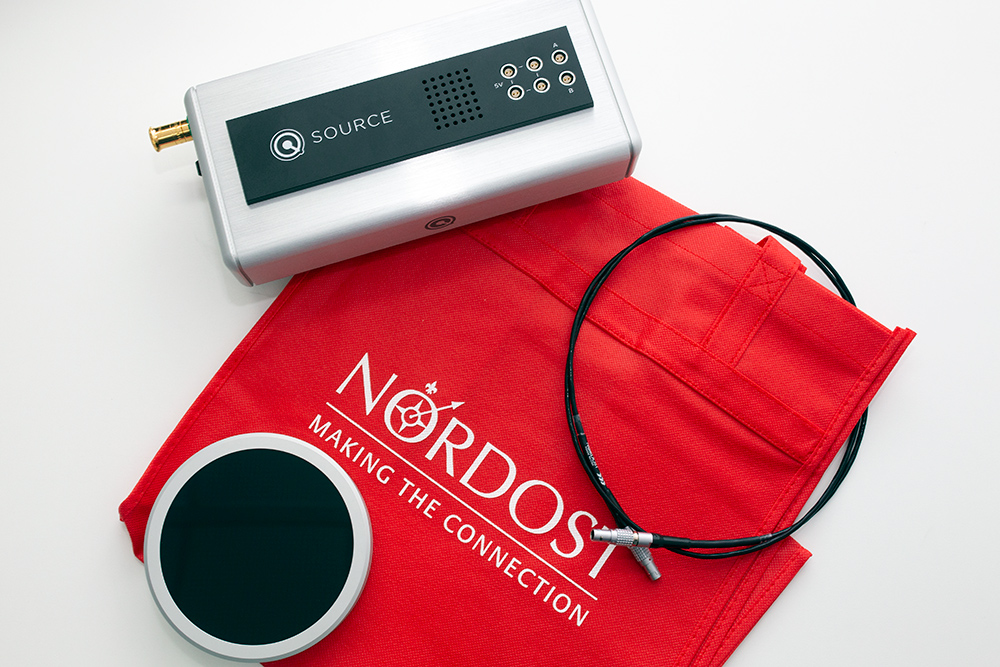 Nordost was showing new models in its QRT line of power products. The most intriguing to our team was the round QPoint Resonance Synchronizer, priced at $749.99, a field generator meant to be placed directly over . . . 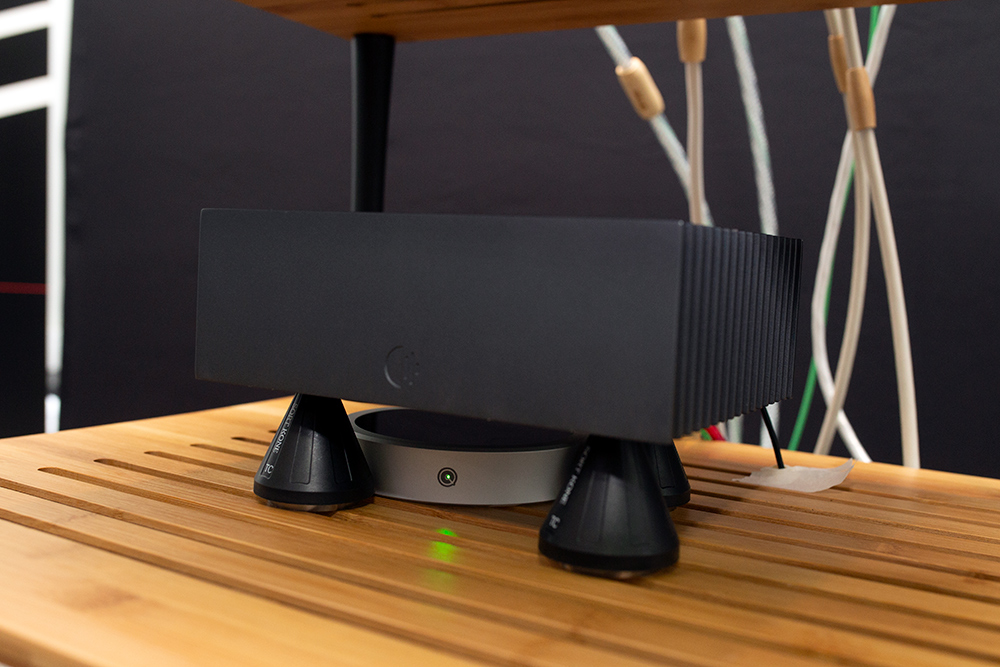 . . . or under a component to synchronize electromechanical resonances in the component in order to reduce electrical noise. The QPoint Resonance Synchronizer has two modes that each generate unique resonances to suit the needs of the user’s preferences and the components in their system. The QPoint comes with a switch-mode power supply, but it can be upgraded with the QSource linear power supply, which uses a high-quality transformer and an internal Nordost QRT module to “smooth out DC output and remove electrical anomalies and noise artifacts from the line.” The QSource has six DC outputs, of which four are set to 5V to be used with one or more QPoint Resonance Synchronizers. Another can be set at 9V, 12V, or 19V, and the other can be set to 12V, 19V, or 24V to provide DC power to other devices in your system, such as a Roon Nucleus or laptop computer. The switches to set the voltages are . . . 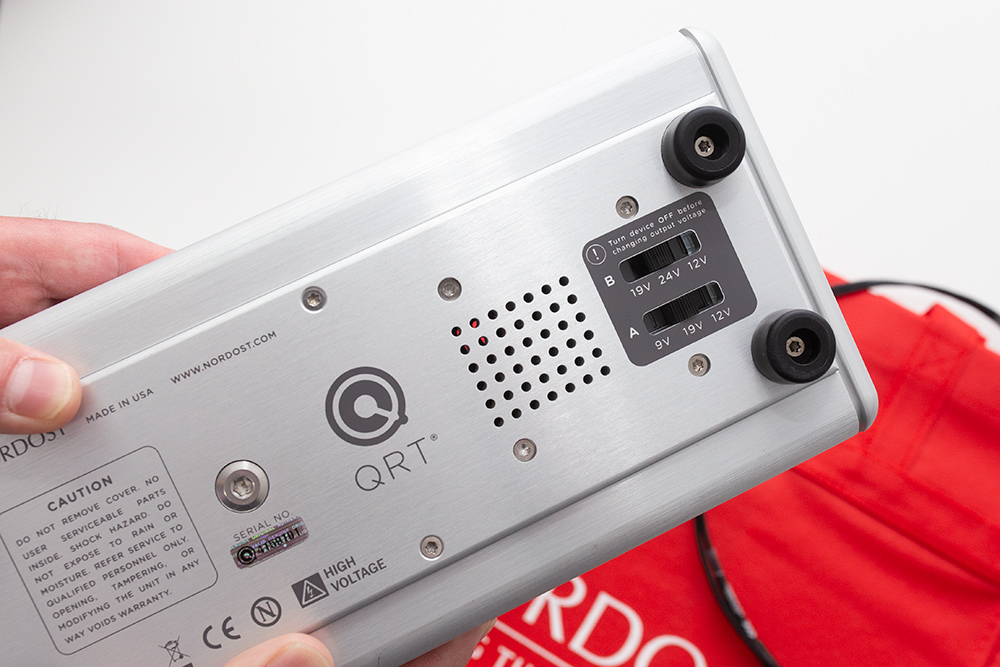 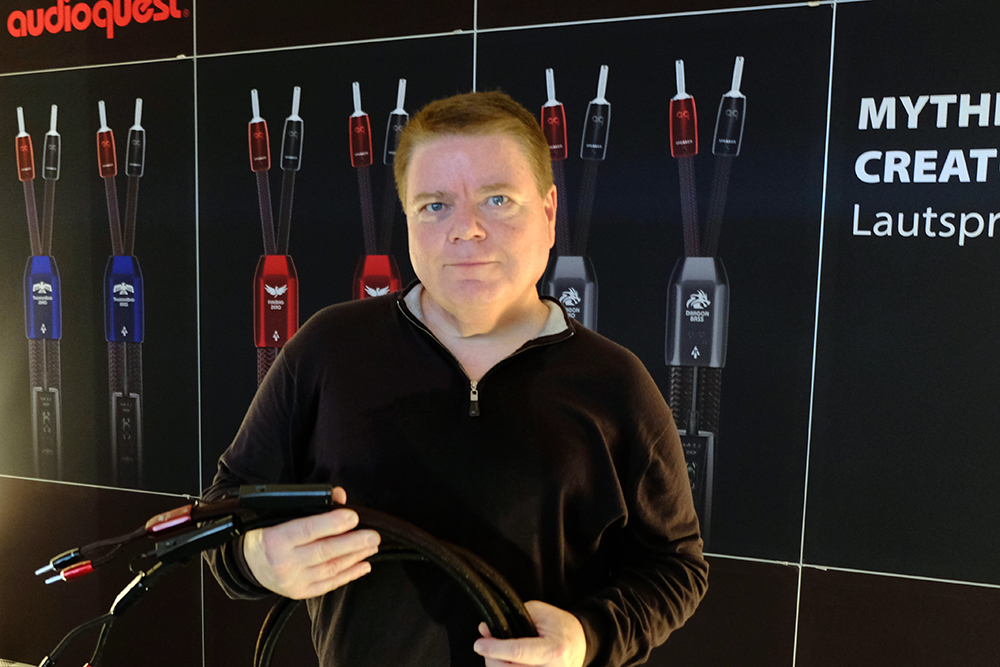 During High End 2019, Garth Powell, senior director of engineering for AudioQuest, presented seminars to demonstrate AQ’s new Folk Hero and Mythical Creatures series of speaker cables. After describing how environmental RF noise can disrupt low-level detail in speaker cables, and how speaker cables’ characteristic impedance can muffle transients, Powell played “Nobody’s Fault but Mine,” from Ry Cooder’s 2018 album The Prodigal Son, through a system that . . . 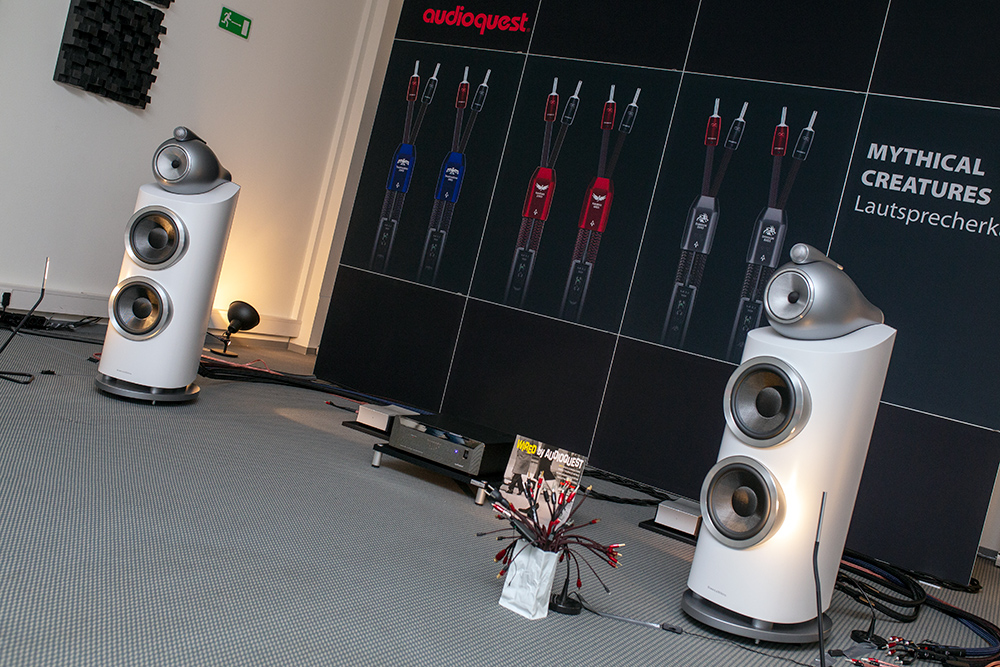 . . . included Mola Mola amplification and Bowers & Wilkins 800 D3 speakers. I couldn’t stay for the demonstration, but fellow writer Gordon Brockhouse could, so I asked him to summarize the presentation for me:

Powell started with lengths of Monster Cable from 1979 and then switched in AudioQuest’s Wild Silver biwire cable, which until a year ago was AQ’s most expensive offering. A 3m pair sold for around €20,000. The difference was obvious, with the Wild Silver cables cutting through the dense reverb more effectively, providing sharper but more natural transients, with more extended decay.

Next, Powell’s colleagues substituted two lengths of William Tell biwire cable, whose price ($4000 for an 8' pair) is about 75% lower than the discontinued Wild Silver cables. Again, there was a clear improvement. Cooder’s voice and guitar both had more body. Micro-detail was better so that expressive nuances came through more clearly. Bass was better controlled. Transients were clearer.

Last up were Dragon biwire cables from the Mythical Creatures series, which have many more conductors than Folk Hero cables. Here, we’re way into luxury territory -- an 8' pair sells for around $65,000. Micro-detail improved even further, making me more conscious of subtle vocal and instrumental inflections. The whole presentation was more nuanced. 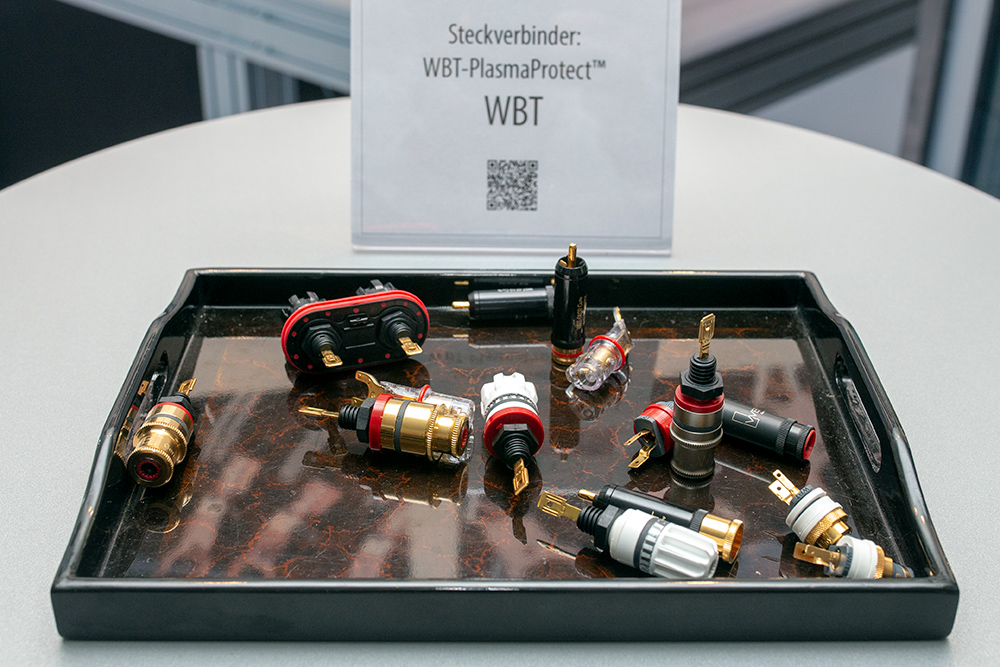 Germany’s WBT is using its PlasmaProtect process to atomically bind gold to the copper conductors of its latest Nextgen products. Using physical vapor deposition (PVD) to coat the conductors with atomized gold in a high vacuum, the company claims the result is a more homogeneous and harder coating that is more resistant to scratches and abrasion than is possible with conventional chemical galvanic surface coating. With PlasmaProtect, WBT’s Nextgen connectors are said to provide improved performance while also reducing the energy required to produce the connectors by 25%. The process also eliminates the use of toxic electroplating baths. Good things come from gold. 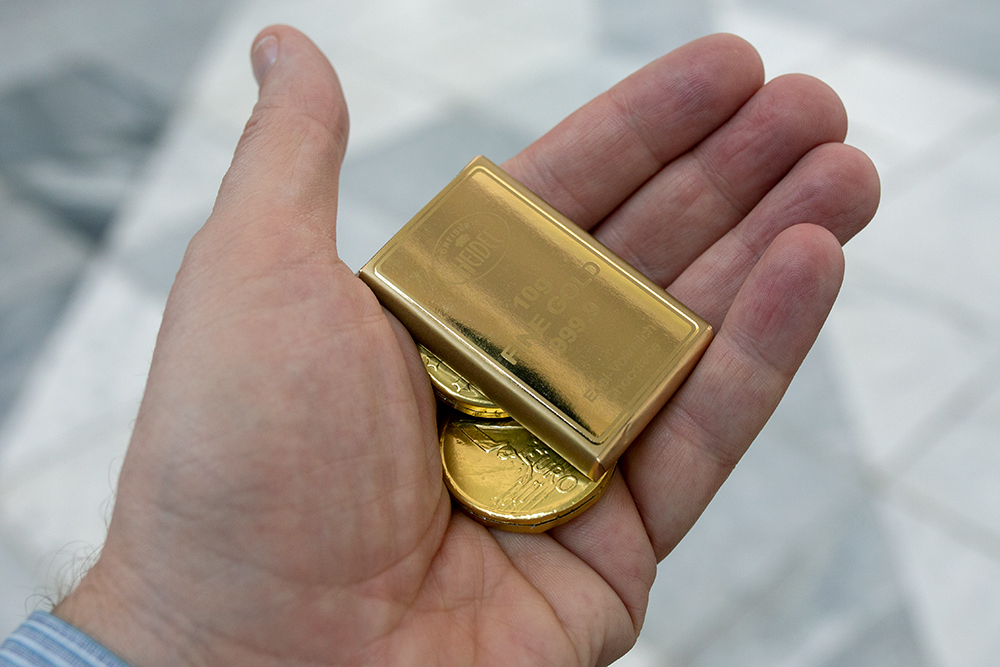