Finding speakers to cover at Montréal Audio Fest 2019 wasn’t hard -- they were in abundance, varying greatly in shape, size, price, and, most impressively, country of origin. In fact, it’s been years since I saw so many speakers from so many places at this show. Below is the second batch of speakers that caught my eye, with prices in Canadian dollars unless specified otherwise. You can read my first installment about new speakers at Montreal here. 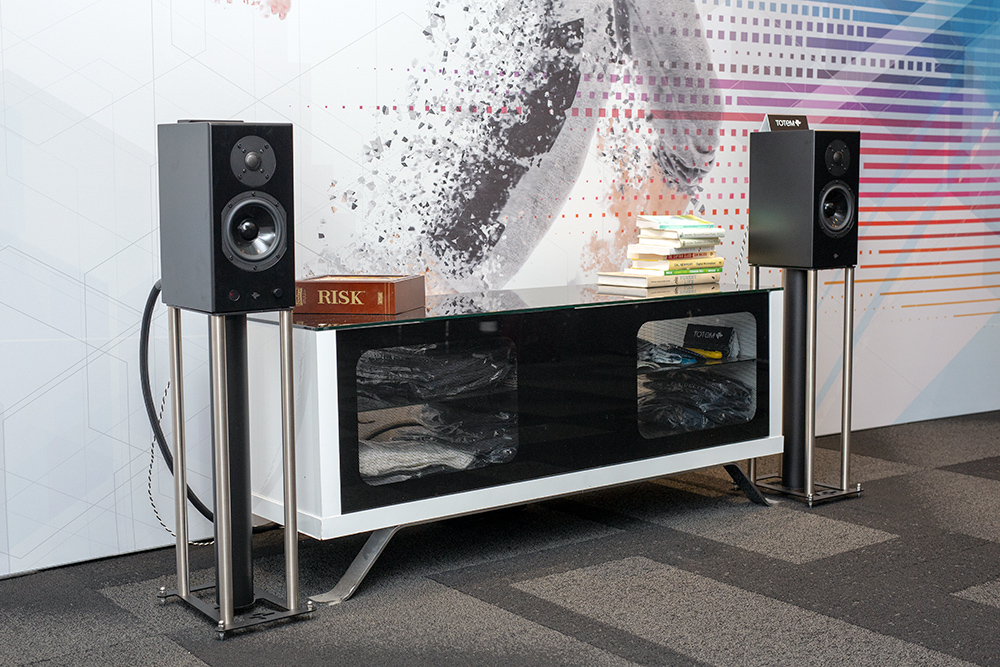 Canada’s Totem Acoustic recently released the Kin Play speaker system, its first with onboard amplification. (Gordon Brockhouse got one of the first samples when the system was announced a few months ago and already reviewed them on SoundStage! Simplifi.) In this setup, one speaker is the master, which means it has the electronics built in -- a volume control on the front, and on the rear, amplifiers for both speakers, digital and analog inputs, a subwoofer output, and even a moving-magnet phono stage, the latter a clever move given the popularity of vinyl. The other speaker, the slave, simply needs the supplied speaker cable run to it from the master. A remote control is also included. The Kin Plays are priced at $1250 per pair and are available in black or white finishes. 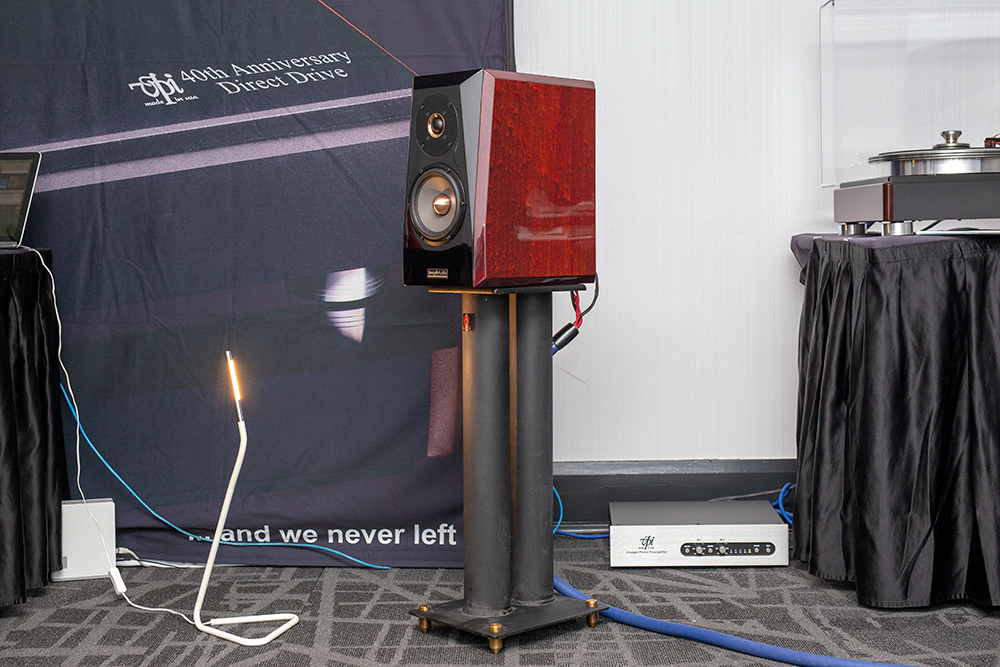 Joseph Audio’s Jeff Joseph, who hails from the United States, has been a fixture at the Montréal Audio Fest for years, but we often don’t give his room much coverage because his company doesn’t release new speakers that often. This year is different -- his Pulsar standmounted speaker is now called Pulsar 2 Graphene. Updated from the old is a new 5.5" midrange-woofer, which has a layer of graphene added to the magnesium-based midrange-woofer cone. But that’s not all. Joseph told me that the driver’s entire motor system and suspension have also been improved, all for much better bass and midrange performance. One other thing that’s nice is that its impedance is 8 ohms nominal, but doesn’t drop below 6 ohms, which should make it easy to drive for any tubed or solid-state amp. The new Pulsar 2 Graphene is priced at $12,000 per pair and is available in glossy black with Maple, Natural Cherry, Rosewood, or Sapele wood-veneer sidewall finishes. 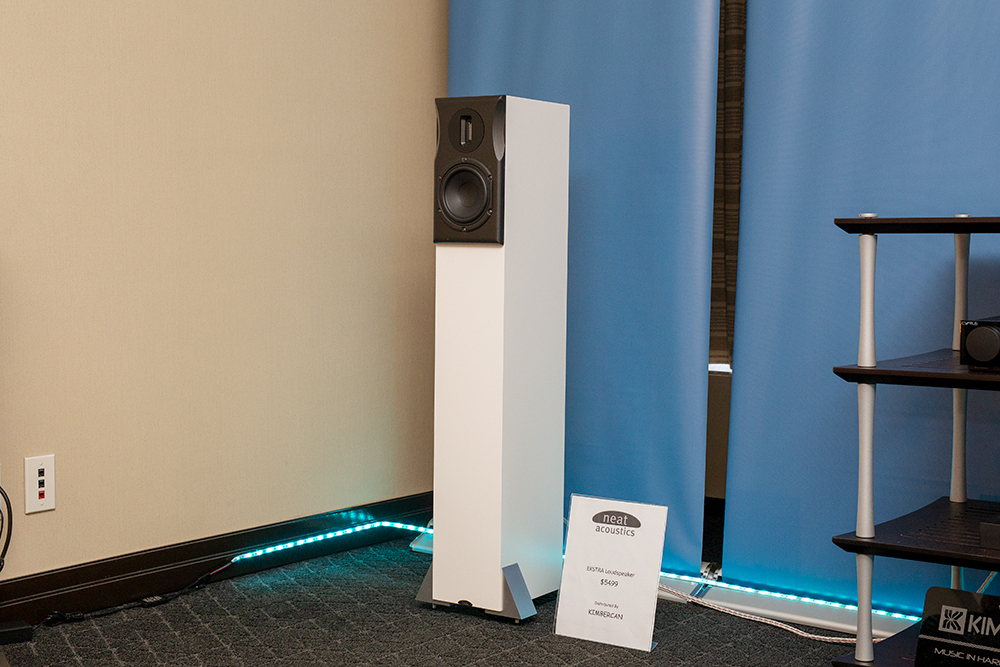 Did you know that NEAT is an acronym for North-East Audio Traders? Jason Thorpe and I learned that while discussing the company’s new Ekstra speaker with Doug Graham, NEAT Acoustics’ international sales manager. It’s a UK-based company. 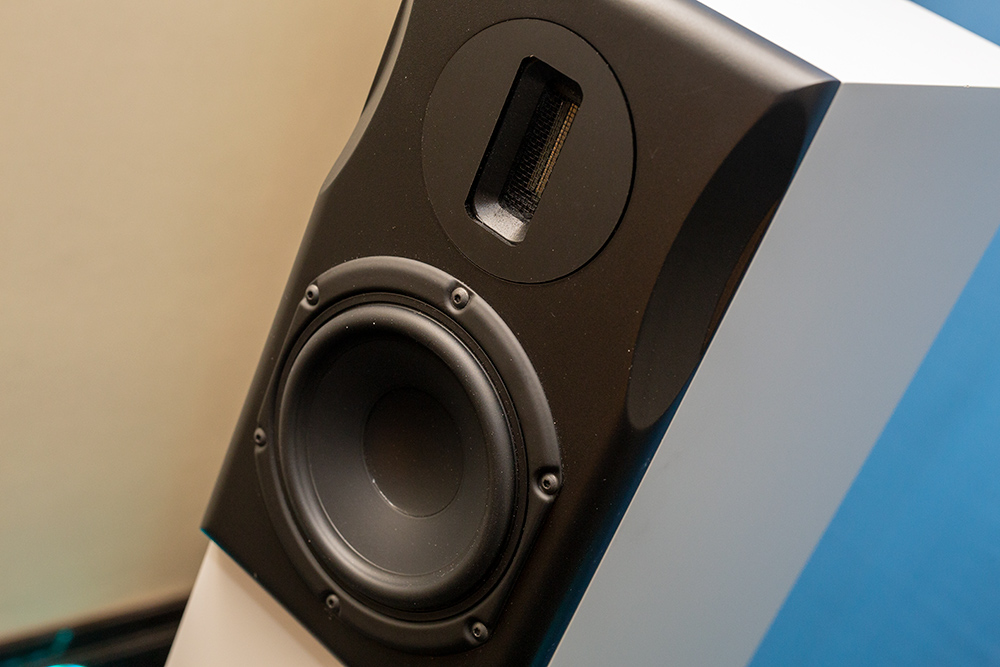 The floorstanding three-way Ekstra packs plenty of technology into a slim, tasteful package. The upper section comprises a ribbon tweeter and a 5.25" midrange, each housed in its own sub-enclosure. Bass frequencies are reproduced by two more 5.25" woofers arranged in an isobaric configuration. The woofer that breathes out the bottom of the speaker is in its own sealed cabinet, while the second woofer is enclosed entirely within the cabinet and is vented by a low-Q (high-bandwidth) port. This arrangement is said to permit placement near walls and corners, which was one of NEAT Acoustics’ goals. In the Kimbercan room, the Ekstra was pounding out deep, tight bass and smooth, refined highs. This is a promising speaker with a lot to recommend it for its $5499-per-pair retail price. 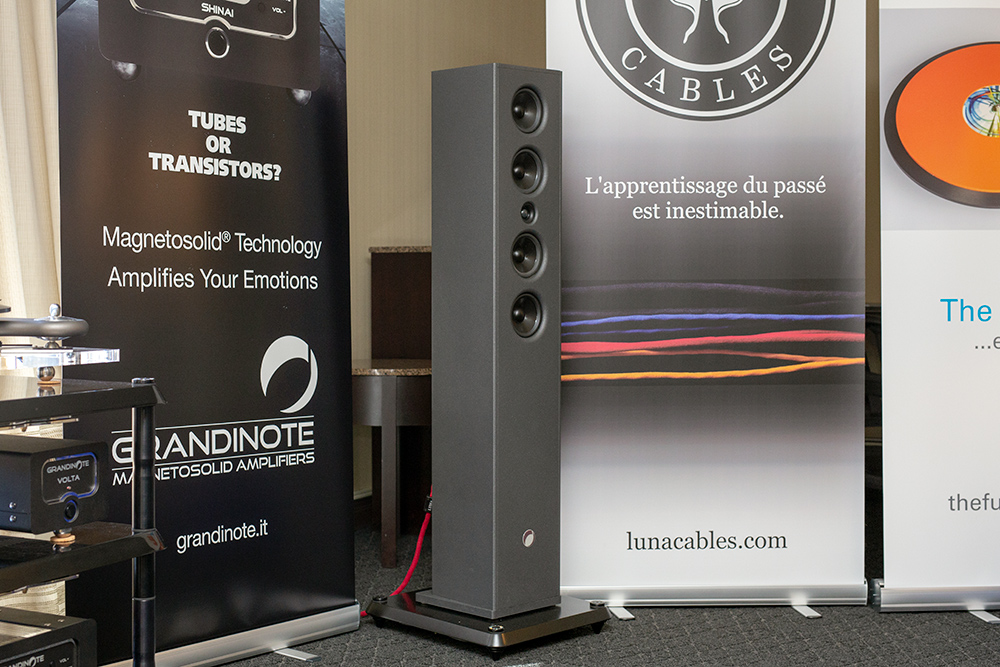 Making its North American premiere was the $36,000-per-pair Mach 4 speaker by Grandinote, based in Bressana Bottarone, Italy. The Mach 4 is a slim and very tall tower employing four 4.25" woofers, all running full-range with no crossover to the tweeter, and ported via a semi-transmission line. Its supertweeter operates from 8kHz on up. The Mach 4 is constructed from solid aluminum and weighs a stout 99 pounds each. 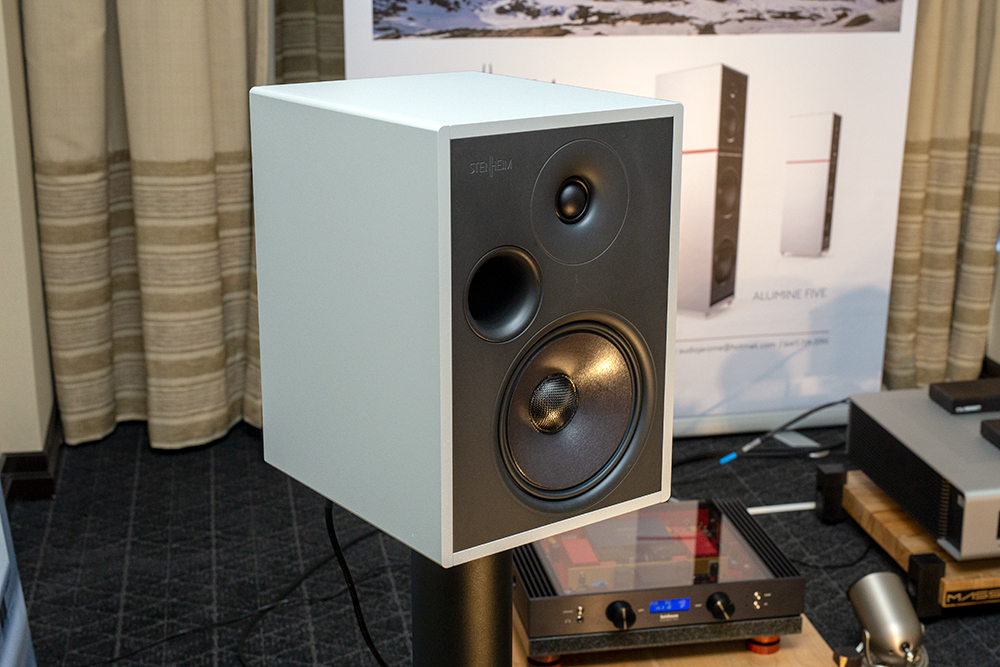 Also showing for the first time in North America was the Alumine Two SE bookshelf speaker from Stenheim, which is based in Vetrolz, Switzerland. The Alumine Two SE is a two-way monitor speaker built to a high standard, with solid-aluminum walls for the enclosure. Driver complements are a 6.5" cellulose woofer and 1" fabric-dome tweeter.

The SE is a special-edition version of the Alumine Two. As such, it upgrades the crossover components, internal wiring, and binding posts. The SE version retails for $20,000, which is a $5000 premium over the standard model. 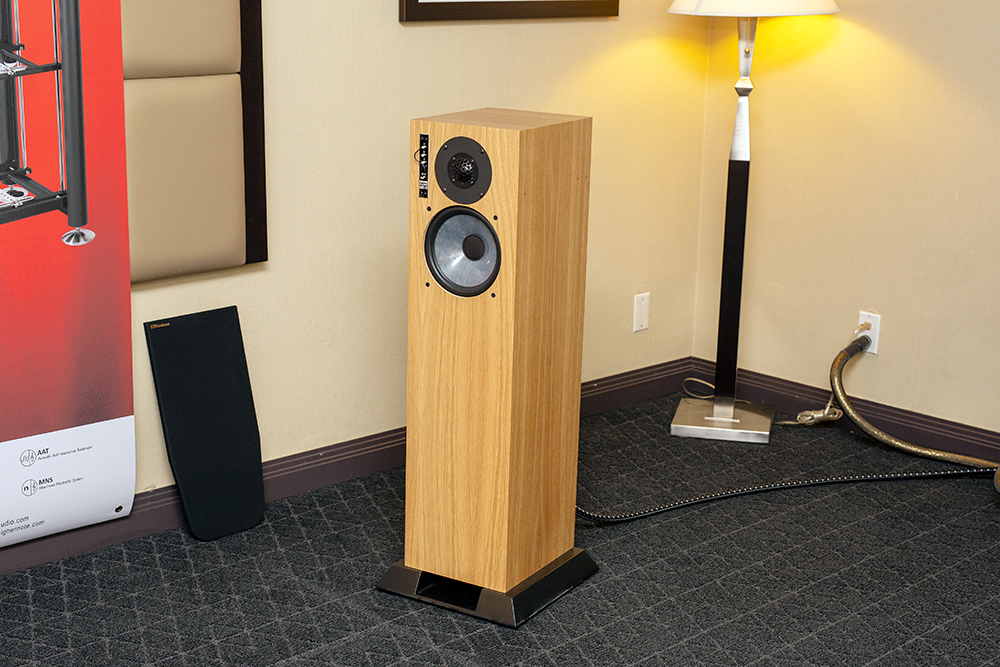 From Graham Audio, based out of Devon, UK, comes a renewed classic, the new LS5/9f. According to Philip O’Hanlon, whose On a Higher Note company is the North American distributor, the $9500-per-pair LS5/9f is a floorstanding version of Graham Audio’s current BBC LS5/9 standmounted model. Being a floorstander with a much larger cabinet, the LS5/9f digs a little bit deeper into the bass. 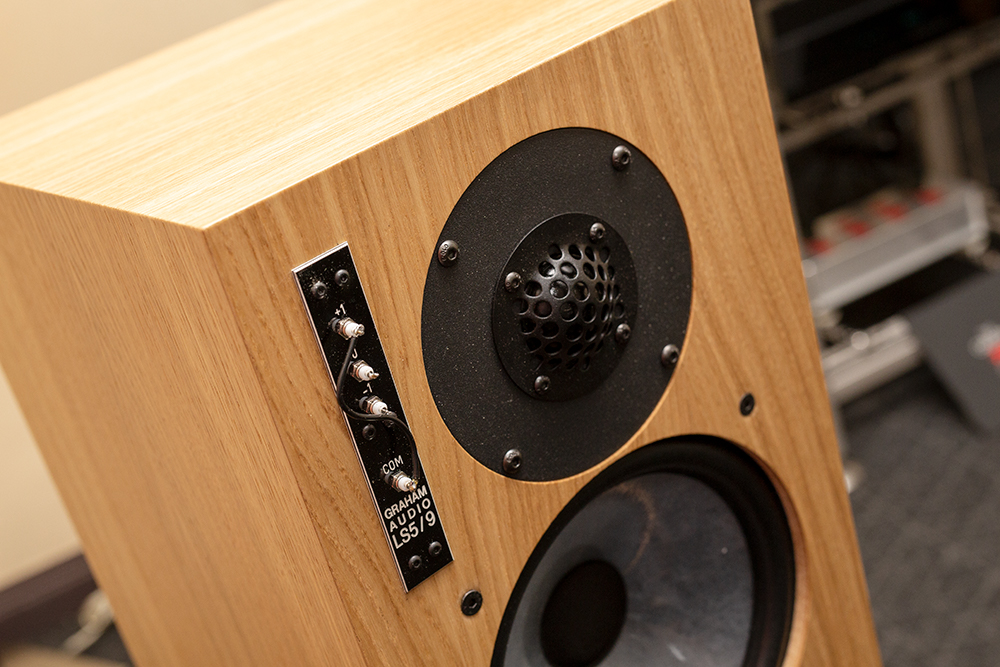 The LS5/9f is built around an 8" polypropylene woofer, made by Volt Loudspeakers of England, which is ported out of the bottom of the cabinet. The tweeter is made by Audax and is adjustable across several 1dB increments to accommodate differing room acoustics. 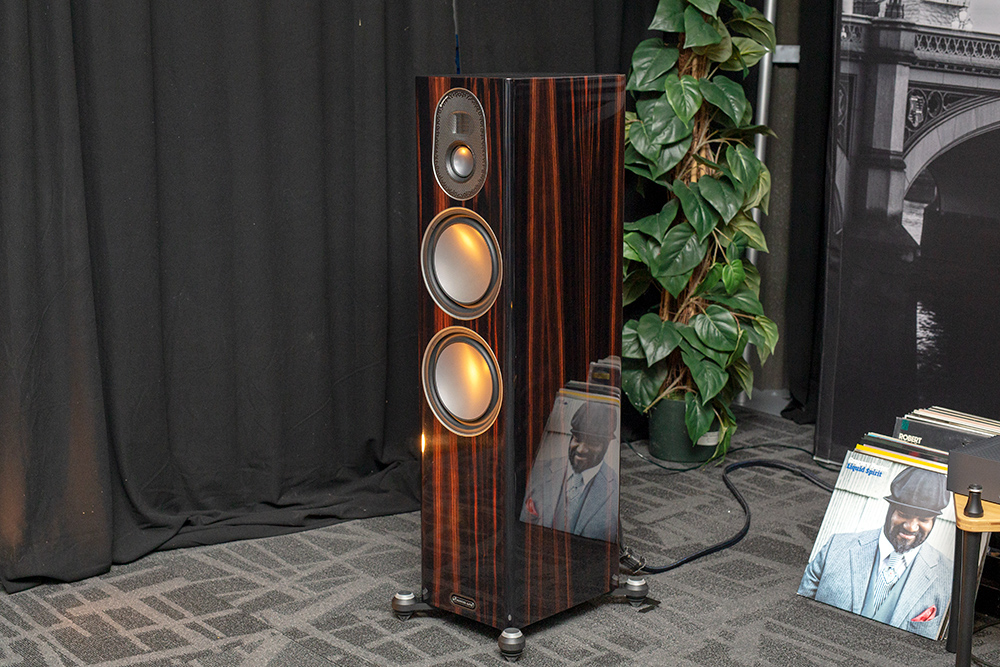 A different UK brand, Monitor Audio, joined with its North American distributor, Kevro International, to show its newest Gold-series speakers -- the fifth generation of this line. The current main speaker models are the Gold 100 bookshelf ($2800 per pair), Gold 200 floorstander ($6500/pr.), and the model playing in the demo room, the Gold 300 ($9000/pr.). For full home theater, there’s a Gold C250 center ($2400), Gold FX surround ($3300/pr.), and Gold W12 subwoofer ($4000). The tweeters are all Micro Pleated Diaphragm designs -- Monitor Audio’s take on an air-motion transformer (AMT), which the company debuted in its Platinum series. The midranges and midrange-woofers have Ceramic-Coated Aluminum Magnesium (C-CAM) cones, while the woofers in the three-ways have Rigid Diaphragm Technology (RDT) cone technology -- C-CAM and RDT being well-known Monitor Audio technologies. 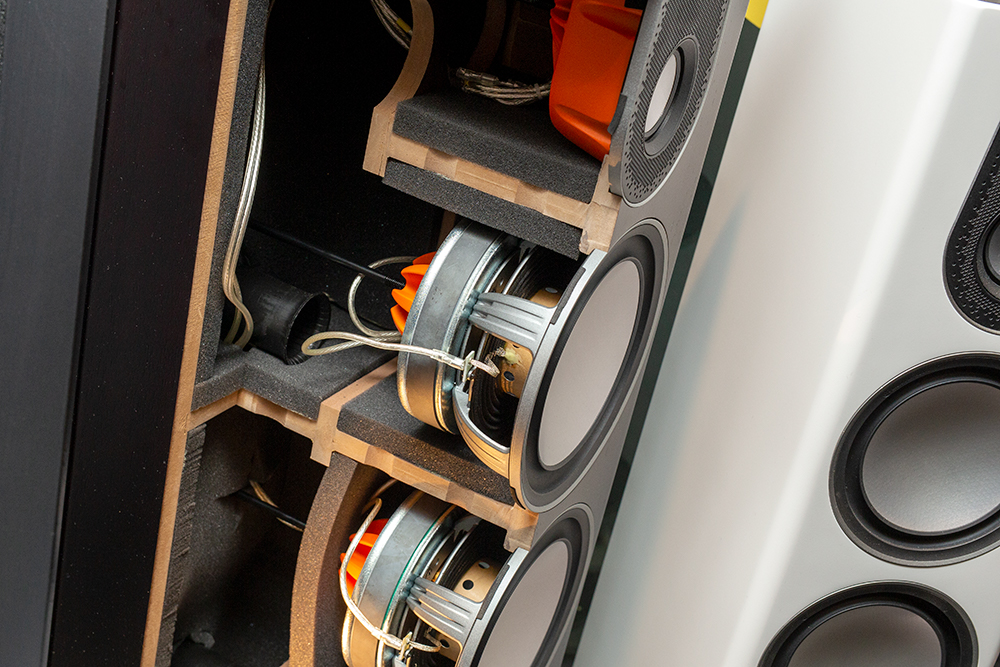 Outside the demo room were the Gold 200 and a cutaway sample of the Gold 300, which helps to show that the high quality of build isn’t only on the outside -- there’s lots of attention to detail on the inside, too. Kevro’s Sheldon Ginn told me that unlike the previous Gold series, which had standard and premium finishes, the new Gold series offers Piano Gloss Black, Satin White, Dark Walnut, and Piano Ebony finishes at the same price.